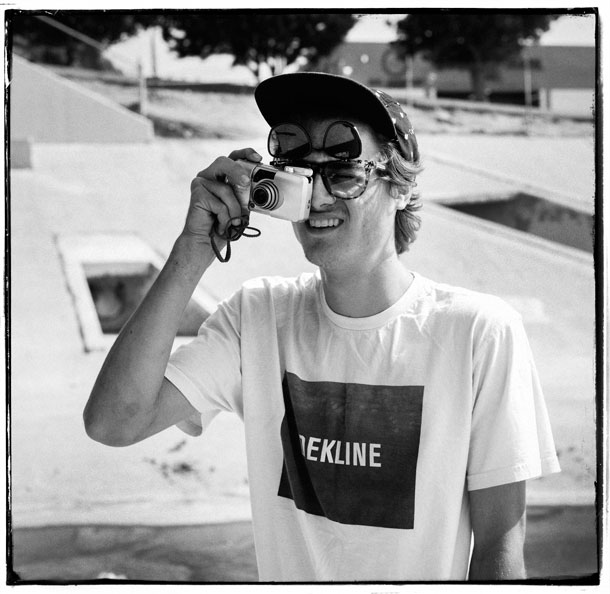 Are the kids gonna shit their pants when they see this Dekline video?
Hopefully diarrhea. Shit, we’ve been workin’ on this thing.

You were quoted as saying, “If a trick’s not going to make a kid shit his pants, why do it?”
I think I was on my last limb of a trick. I was pretty irrational. But it’s kinda true these days.

What do you think are your most pants-shitting moves in this thing?
Probably the thing I got with Dan Z. That’s probably what I’m most proud of.

Well, this interview is going to be right next to the photos so I guess the cat’s out of the bag. You’re talking about the switch 360 flip 5-0, right?
Yeah, that one.

Nice. Is that a trick you’ve been trying for awhile?
Yeah. I’d been learning it on curbs. I just found the right rail. I finally got to do it.

You’ve got quite a few switch flip tricks to rail in this one. Is that the area of progression you’re most interested in?
Not really; that’s just what I can do. That’s what I learned how to do. I liked P-Rod’s skating a lot when I was little. Me and Joey Ragali are, like, “Yep. P-Rod’s skating. Fuck it.” We’re P-Rod kids.

Did you grow up with lots of flat bars and ledges?
Yeah, it was just a pre-fab skatepark. It’s called Flagler skatepark. Everything there’s on flat ground and then there’s a two-foot hip. That’s it.


He'd rather fight than switch. Besides, who would Blake celebrate this switch 360 flip lip with if not his Dekline bros? Sequence: Hammeke

That’s everything you need to get P-Rod.
Yeah. I loved it. When I was a kid the Florida dudes all wore cut-off jeans shorts and had mustaches.

Did you see any of that style growing up?
Yeah, I definitely saw Benji Galloway and Tim Johnson and all those dudes growing up. Did you ever hear about Flatline?

Yeah. I went on a trip with Joey Corey.
Oh, hell yeah. There was a dude, Joe Delcarmen, that was on their team. He hurt his knee but he was still so good. He pretty much gave me my first pair of shoes and board for free. He rode for Genesis footwear and he was on Flatline. He was the man.

So what’s the deal? You look like a Californian. Where’s the mustache? Where’s the surf trunks, at the very least?
I’m trying to grow it out, dude. My chin hairs only grow out of one side of my chin. I have to even it out. It’s dirty. I can’t fake the look, you know? I used to skate shirt off, mesh shorts, sweating in the Florida sun all day.

So we’ve got Joey Ragali. We’ve got Brad Cromer. There’s Floridians coming out of the woodwork.
Brad Cromer is awesome. He was my favorite skater growing up. I used to watch his first homie part he put out. I used to watch that forever
and ever. 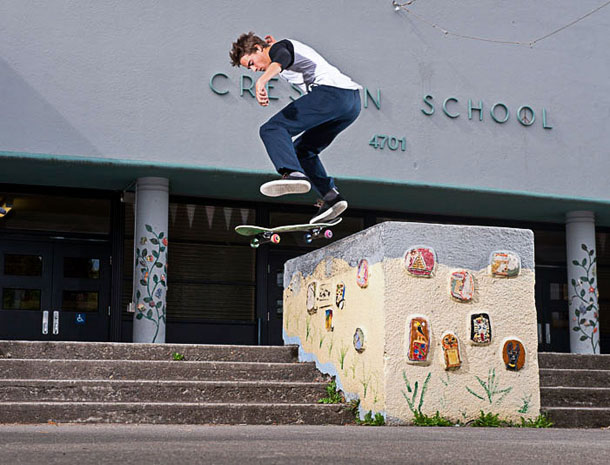 What was your crew growing up?
It was just some kids at the skatepark. My mom would drive thirty minutes from my house and drop me off and I’d just stay there. I pretty much left my home at 14 and didn’t come back. All I wanted to do was be where I could skate.

So you’re now in the death throes of the Dekline video. What’s going through your mind during these last few weeks of filming?
I’m happy, but I just want to throw myself as much as possible—get as many tricks as I can. I was just watching some of these new videos like the Enjoi video and I’m thinking, “Damn. I don’t have anything like that.” It’s never gonna be perfect. I’m just ready for it to come out.

You guys travel in one of the biggest posses I’ve ever seen—like seven or eight cars deep. What are the pros and cons of skating with such a big crew?
The pros are so many bros. We’re just doing whatever we want. We literally party wherever we go. We set up tents, start making smoothies and then roll twists on the back of a cop car. We’re partying. I love it. The cons are absolutely filming no lines.

No lines?
No lines.

Because there’s no time for the filmer to give one dude that much attention?
Exactly. But that’s okay. I’d rather watch someone try one gnarly thing and roll away from it.

So is this going to be a Zero video, just trick after trick, maybe a 360 flip before a handrail?
Yeah. Right now it sort of seems like it. But there’s some good lines in Matt B and Tim Tim’s part. Hopefully those will even it out.

Are you super critical of your footage?
Yeah. I just think it looks boring. I think, “I could have done that on something better. That doesn’t even look like I’m trying.”

So you look too smooth?
Nah, too stupid. I look like I’m asleep or something. I always land tricks at the last moment. That’s just what I look like, I guess.

Are you picky about what a spot looks like or are you down to land on a sheet of plywood over a grass gap?
I’m down for whatever works. If it’s a tight trick I don’t think it matters if there’s a blue wall in the background.

Did you see this Cherry video?
Yeah, I like it. I watched it a few times. I used to skate with those dudes when I lived in Hollywood. They were all little kids though. I remember Sean Pablo was some 13-year-old kid who could do sick backside Smith grinds. 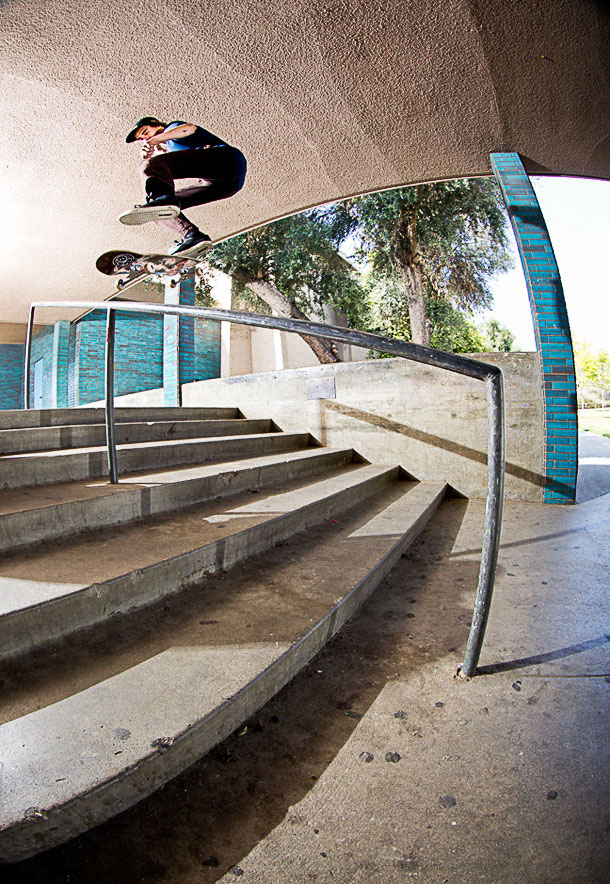 Did it make you want to ditch Orange County and go to New York to ride the real streets?
Not really. I’ve only been to New York once. I’d go back any time, though. Take me.

Have you ever gotten into it with a stranger over social media?
Sure, but only to defend my friends. Like, I’ve said smart-assed things back to them. “Sure! You fuckin’ idiot!” I don’t even know what I said.

What do you think when you see something lame about yourself on social media?
I love it. I think it’s so funny because these dipshits think they know. And they don’t know shit. 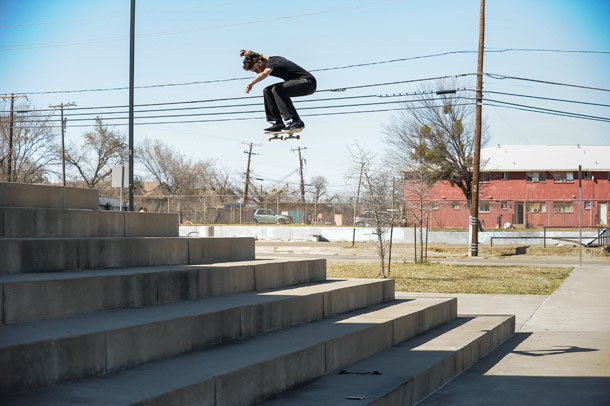 Busting big for all the mustaches in Florida. Switch backside 180. Photo: Hammeke

Exactly. So Nyjah’s got this cracker sponsor. If you could have a snack sponsor, what would it be?
Fruit! Fruit fo’ sho’! I’d eat all the fruit in the world! Just hella fruit everywhere.

Are there any Asphalt Yacht Club shirts you will not wear?
I’d have to say there’s one. It’s the one with the top of Stevie’s head and the bottom of Stefan’s head, put together. I kept one but I don’t wear it.

I feel like I’ve seen the entire line just by hanging out with you.
Yeah, it’s all tight.

Why’d they cut Nordberg?
I don’t know. He’s a cool guy but maybe he was hating on the brand too much to keep him on. Why pay a dude who’s just gonna hate? It’s kind of stupid.


Blake with a switch 360 flip 5-0. P-Rod would be proud. Sequence Zaslavsky

Do you and Stevie get along?
Yeah. Really fuckin’ good. He’s the man. Anything you need, he’ll take care of it. Like one time I was drinking a Modelo tall boy in the lobby of a hotel and they’re all, “You can’t have that in here.” I was kind of giving them a hard time and Stevie walked up and said, “Hey, what the hell do you think you’re doing? Go get yourself a real drink,” and gave me 40 bucks.

Speaking of ballin’, you’ve gotten a bunch of offers from bigger shoe companies than Dekline. Why are you sticking it out with Dekline?
‘Cause I love my bros! I feel like the good times outweigh whatever riches might come from that kind of thing. They’re paying me more money than a regular job I could be working, so why switch it up? I don’t want to fuck with anything.

What other board companies do you like besides Toy Machine? What would you do if Ed gave you the boot because he said you’re not tech enough?
I don’t know. Krooked is cool. They’ve got Bobby, who’s one of my favorite skaters growing up, too. I’ve gotten to hang out with him in the last year and he’s super cool. I really don’t want to think about riding for anyone besides Toy Machine.

If you want to keep it real I’ve got a friend over at Lake skates I could slip your tape to. How about Crown skateboards?
I’ve got options.

Totally. Who do you like for Skater of the Year this year? Tim Tim? Bennett? Who?
It would be so sick if it was Matt B. He works so hard. Matt B inspires me a lot. Besides him, Ishod is incredible. Wes Kremer put out crazy parts. There are so many people out there; it’s hard to pick.

Well, either Kremer or Bennett.
Yep, sounds about right.