Chocolate's "All Eyes on 'Keem*" Article 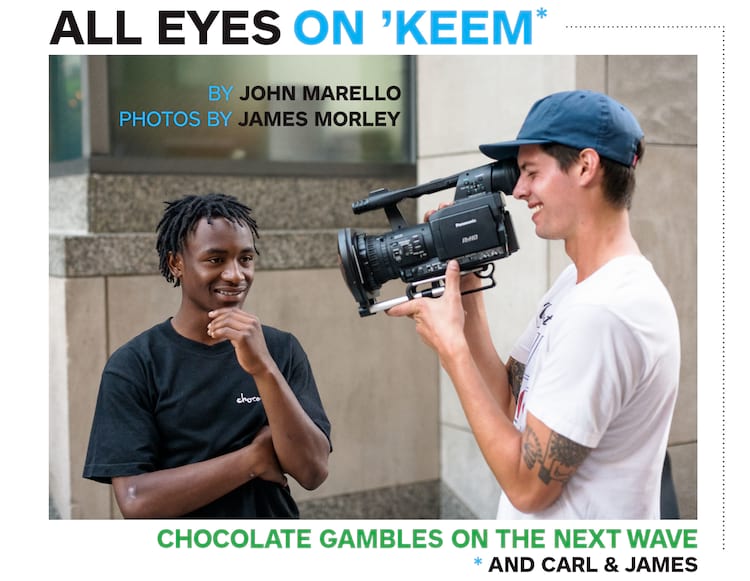 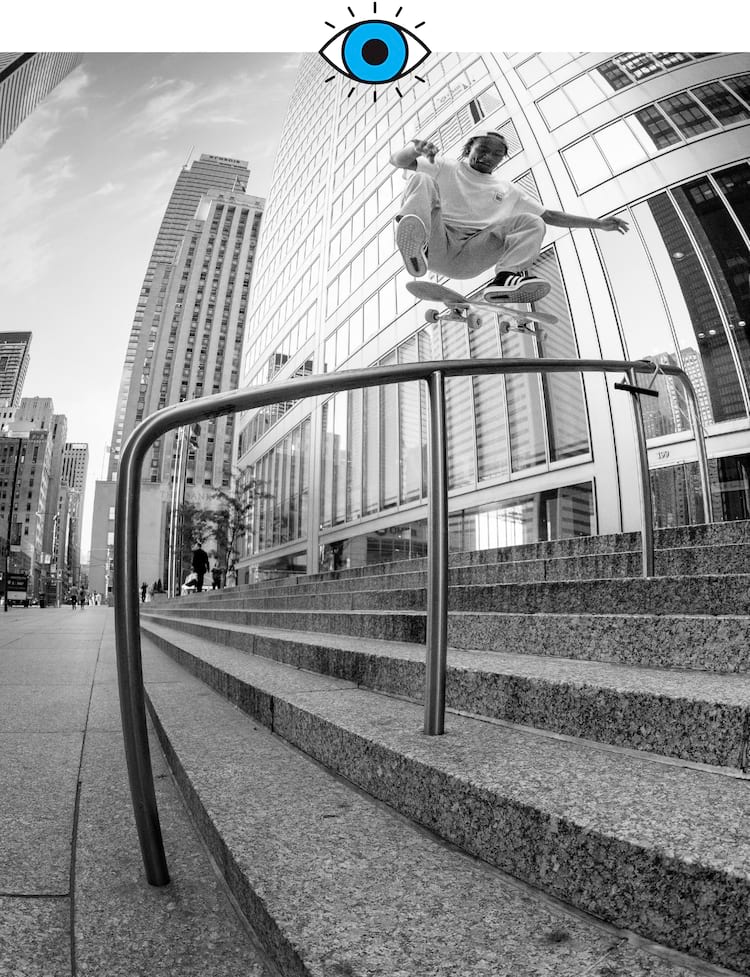 All eyes on ‘Keem's kickflip frontside 50-50. Bet on that

As a kid, Chocolate tours were always a thing of legend, immortalized by videos like The Chocolate Tour and Hot Chocolate. So when I got word we’d be hitting the road from Toronto to New York City, I couldn’t help but get nostalgic about the hours spent on the bus as a kid watching an illegally downloaded version of Hot Chocolate on my iPod video (Sorry, Rick and Mike). With three new ams getting the nod in the past year after an almost decade-long gap without an amateur addition (think Elijah Berle), it was time to take the show on the road. First up, Hakeem Ducksworth. Straight outta’ Bompton, ’Keem is quick with a freestyle and even quicker to hop out of the van and skate every spot. Having hardly left his home state, he was eager to experience the rugged East Coast terrain he’d seen in videos. James Capps has been a part of the Crail family for years but it was just recently made officially official. A seasoned globetrotter with a handful of video parts under his belt, Capps is no stranger to the road and was ready to help show the kids the ropes. Our newest addition, Carl Aikens, hails from the SCV (Santa Clarita Valley) but recently made the move to NYC and was excited to show the boys his new home turf. Don’t let Carl’s silky smooth style fool you, he’s a total nerd. Covered in Harry Potter and anime tattoos, he’s ready to jump down the biggest gap you got or tell you the entire plot of Dragon Ball Z at the drop of a dime—whatever tickles your fancy. 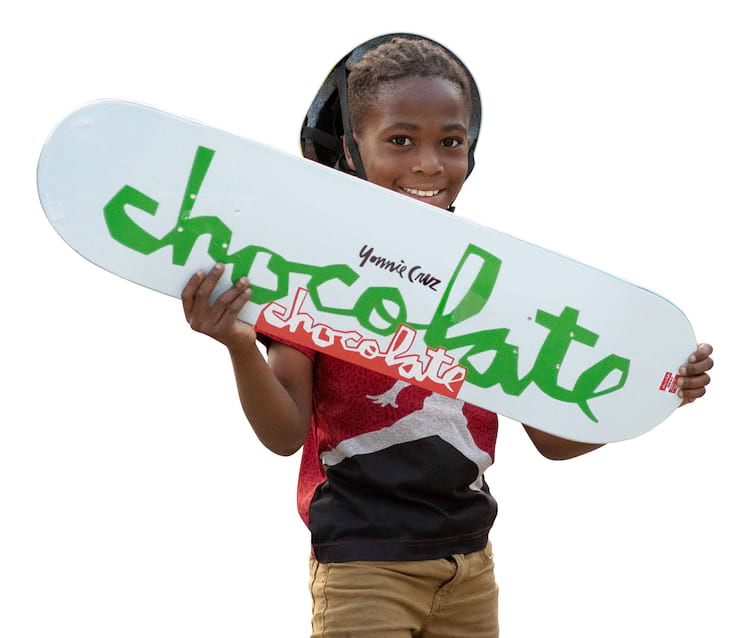 This kid only reps the greats 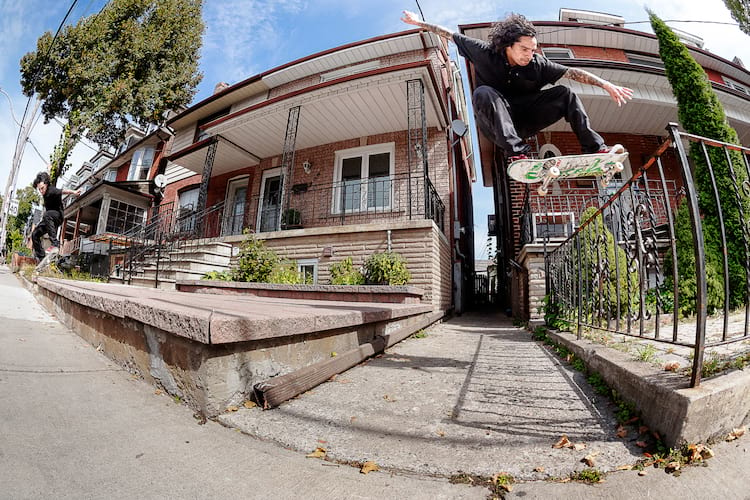 Yonnie Cruz switch hops up and over into the patio. Welcome to the neighborhood 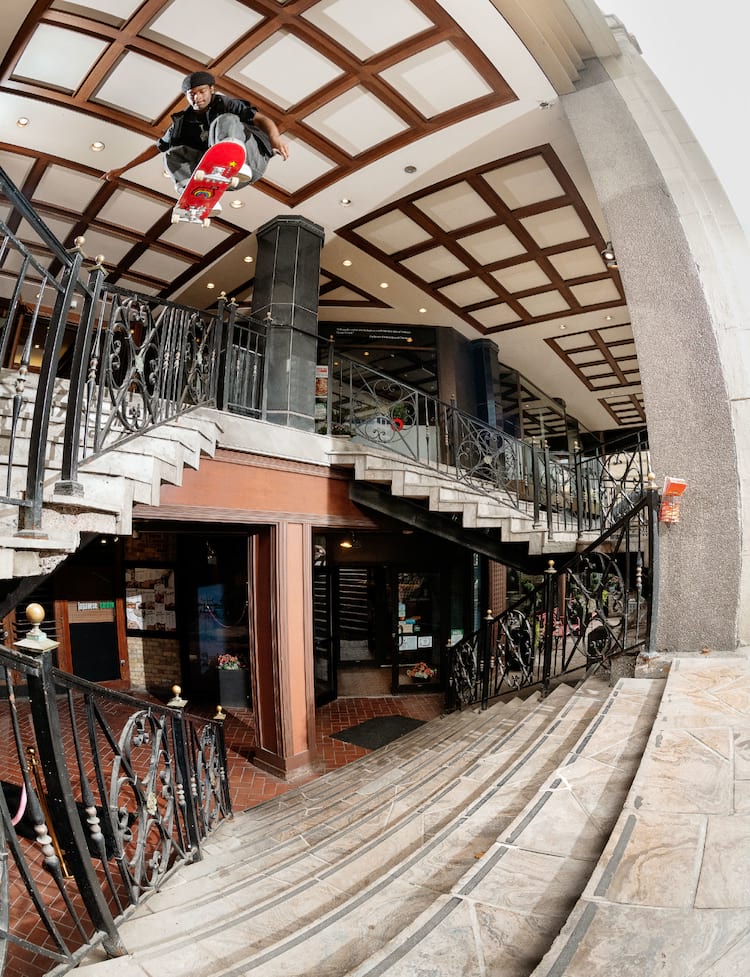 One of these guys is a silent killer. Choose your fighter and place your bets

TORONTO
As we arrived in Toronto and made our way through customs, we prepped Hakeem and Carl with the lingo. “We’re here on vacation; don’t mention anything about work.” Capps already knew the deal—stating that you’re entering a foreign country for work can cause all sorts of problems. But as we did a head count at baggage claim, it wasn’t the kids who were missing, it was Vincent Alvarez. Turns out Vinny had gotten a ticket almost ten years prior for skating in LA and that was enough for the Canadian Border Patrol to turn him around and send him back home. When the distributor pulled up to get us, we spotted a familiar face in the van. “Eldy?!” Well, not quite—more like a life-sized cardboard cutout of Justin Eldridge circa 2007, but hey, we’ll take what we can get. As we pulled up to our Airbnb, which happened to be conveniently located above a bar, the owner stumbled out to let us into our new home for the week. “This place is great! You guys are gonna love it! We usually have bachelor parties stay here,” the owner boasted, and it showed—no working stove, spiderwebs by the beds, holes in the couches, plus one toilet for nine guys, but the kids showed no mind and besides, they weren’t there to sit around in an apartment, anyway. “Let’s bet $100 of our per diem on who can get the most clips on the trip,’’ Hakeem said to Carl while claiming their couches in the living room. Carl agreed and a note in ’Keem’s iPhone solidified the deal. 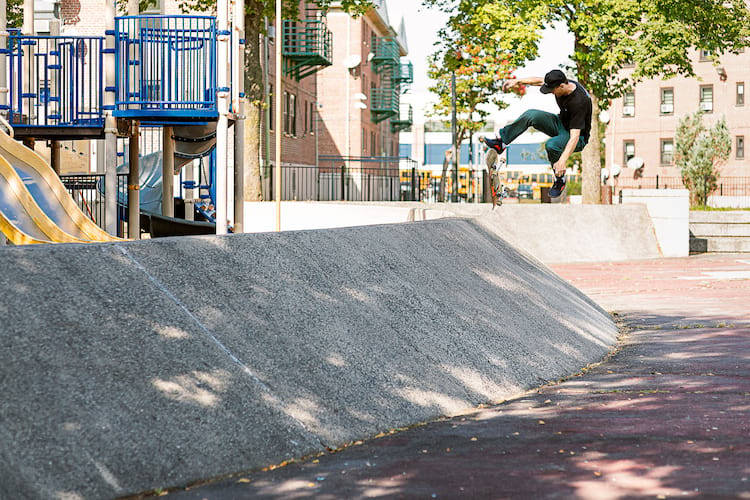 One of the best to ever do it, Rick Howard came to keep an eye on the kids and catch a picture-perfect 360 flip to fakie

On our last night in town, the under-21 Carl decided to take advantage of Canada’s lower drinking age with a night on the town. We stopped in downstairs at the Airbnb owner’s request and were quickly greeted by the bartender. “You guys staying upstairs for a bachelor party?” Yeah, something like that. A few Labatt Blues later and Carl was experiencing his first taste of the late-night munchies, so a stop at the local burger joint was in order. “Is it normal that I can’t feel my lips when I’m eating?” a green-faced Carl asked me. “I think that means it’s working.” 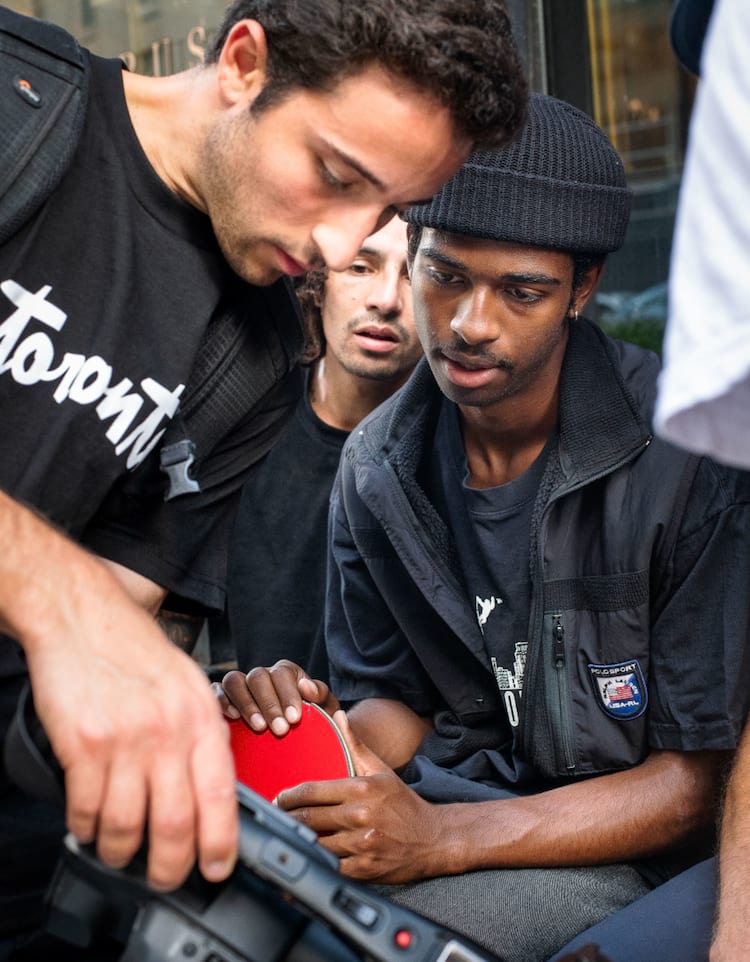 To get the chips, you must stack the clips 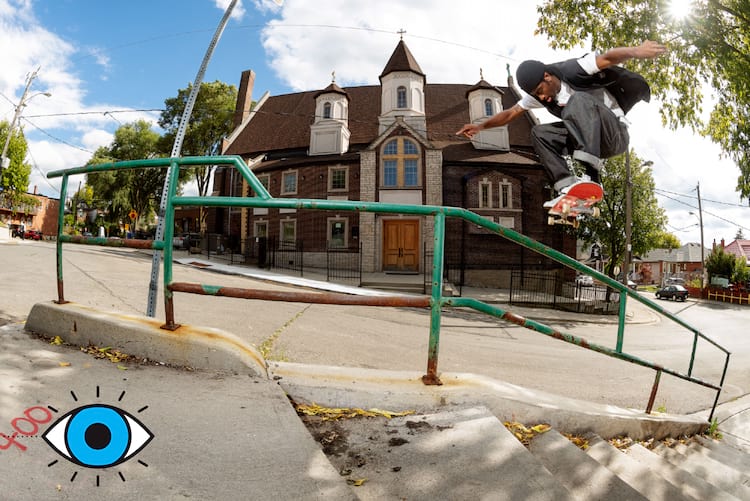 Carl, switch backside 180, flying through the air like Goku 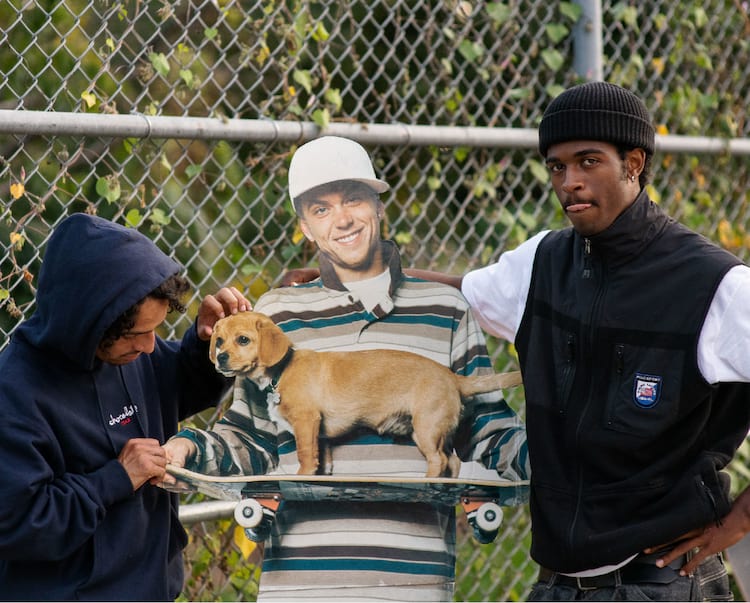 First one on the ground, Eldy gave a warm welcome to the new dudes 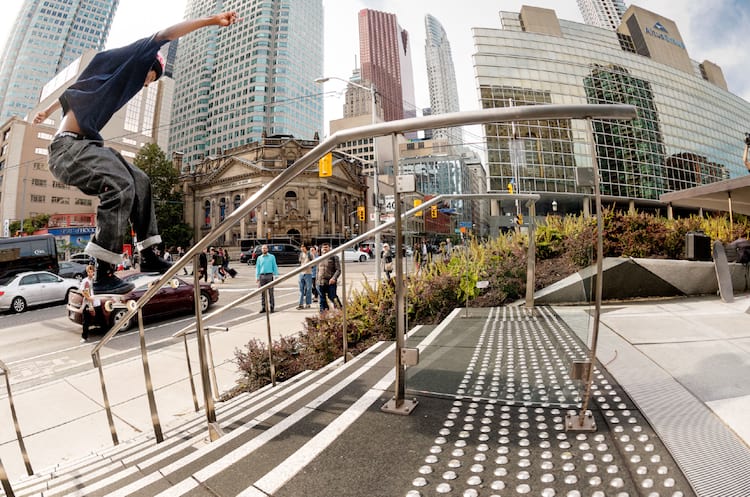 He doesn’t skate rails often, but if there’s a gap involved, Carl’s game. Ollie out to front board in Toronto

NIAGARA FALLS
The diversity between the new guys was none more apparent than at our stop at Niagara Falls. Capps, having been twice before, helped navigate the crew to the best spot for optimal Instagram opportunities. Hakeem immediately jumped up and sat on the railing, teetering on the edge, mere feet from the raging waters. “You know what would make this even better? Sharks diving like BOOM!” We’re definitely not in Compton anymore. Carl couldn’t help but lament over the existentialism of the situation. “If you put your hand in the rapids, you’d die—tempting.” A couple of group shots and selfies and we were back on the road, headed to my hometown of Rochester to pick up Vincent, finally able to join the trip now that we were back on American soil. And what’s the first thing you do when you get back to the ol’ USA? Eat ridiculous amounts of food, of course. Which led us to Dogtown Hots for the infamous Garbage Plate. If you’re unfamiliar, a Garbage Plate is a heavy helping of mac salad and home fries, topped with cheeseburgers and smothered in hot sauce. Google it and thank me later. Along for the trip was the GoPro-wielding Girl rider from Down Under Andrew Brophy. Later that night on our drive to Albany, Smyth could hear Brophy scarfing something down while riding shotgun. “Whatcha doing up there, Broph?” “Finishing me Trash Can” he muttered between indigestion sessions. Close enough. 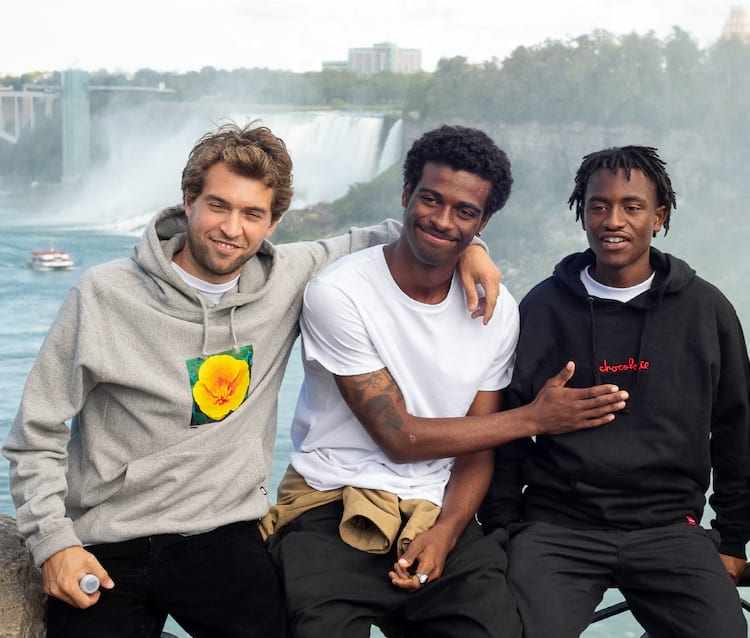 James shows the first-timers that spot for the perfect post 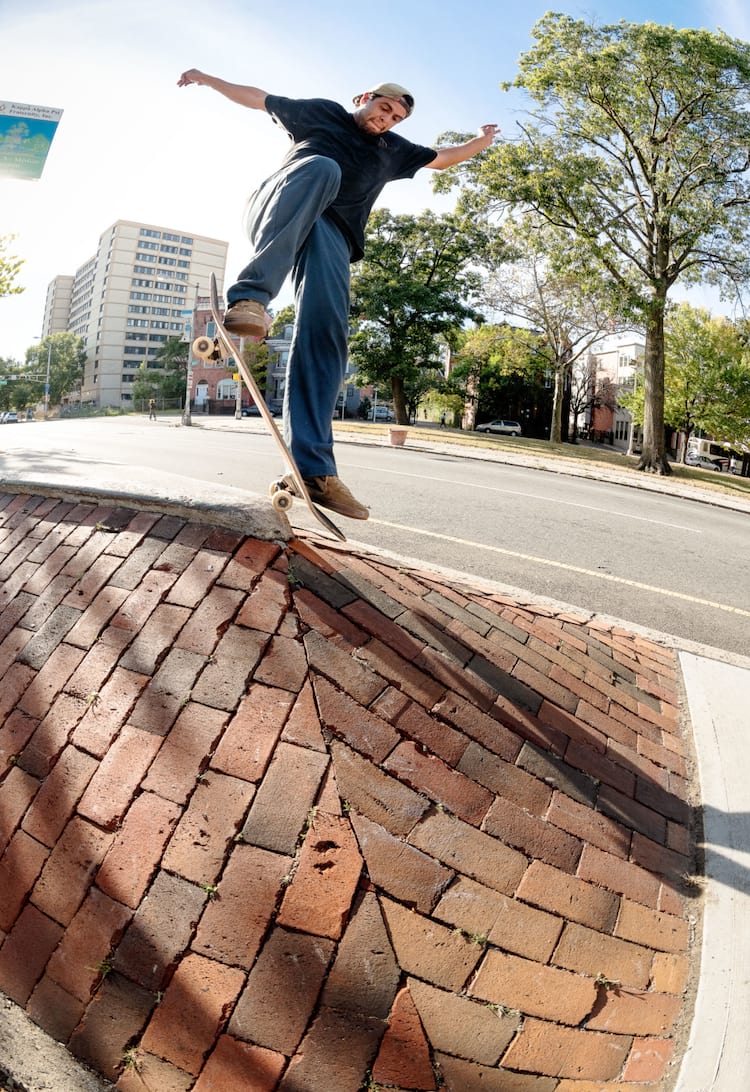 Vincent might not be allowed in Canada, but he had no problem getting into this switch blunt through some Jersey crust

DEMO CHAMPS
Going on the road means demos and signings and what can be daunting for most was exciting and unfamiliar to the new guys. Always eager to get a clip, a naive Hakeem dusted himself on a few occasions filming at the local spots before demos. This would often result in what ’Keem referred to as “Eco Mode,” which just turned out to be quietly listening to music with his hood on in the back of the van. But it wouldn’t be long before you’d see him sneak into the demo and silently start ripping. Silent, that is, until you hear him calling out bets with the local shop owners for tricks in the park. In Albany, the whole demo crowded around as CB from Seasons and ’Keem made wagers on tricks on the big quarterpipe. I don’t think CB realized they’ve got transition in Compton and ’Keem walked away with a handful of well-earned cash. As the demos would wind down, I knew I could always count on Carl for the crowd-pleasing big stunt to shut down the show. “Switch hardflip the biggest thing here so we can head out,” we’d say, and without hesitation he’d oblige. Thanks for making my job easy, Carl. 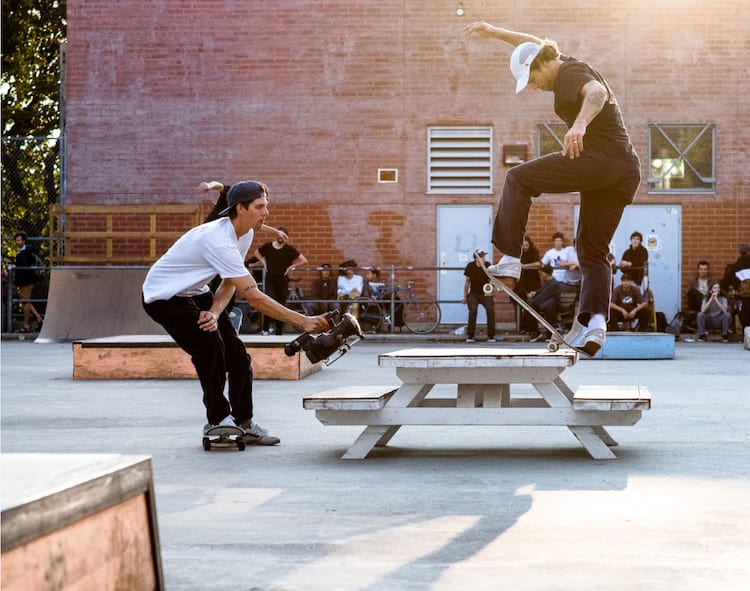 Front blunt before sitting down for a Garbage Plate, Brophy digs in 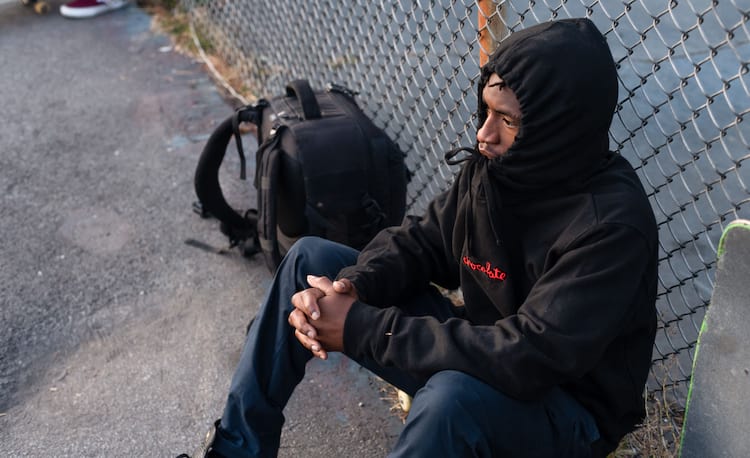 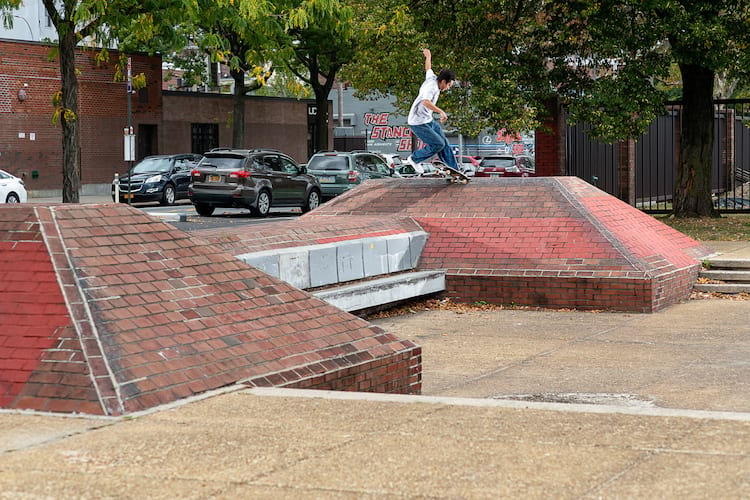 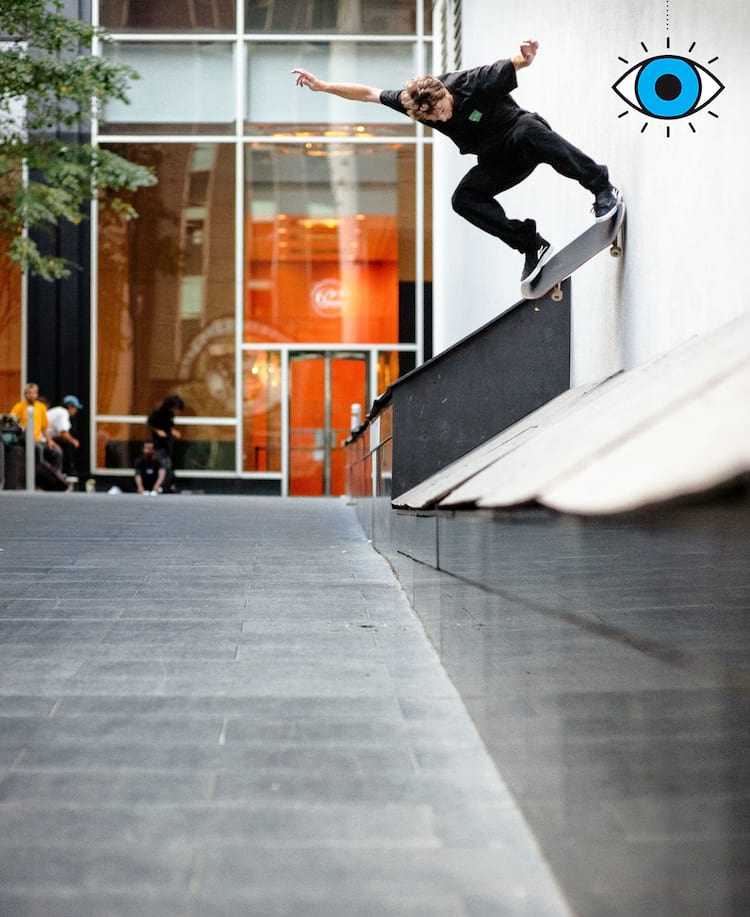 James, wallride nollie out on splintering plywood while Quim and ’Keem cypher in the background

JERSEY CITY
When we got to Jersey City, where we’d be staying for the final stretch of our trip, it wasn’t long before Yonnie hit up Quim Cardona to show us around his stomping grounds. Following Quim and Yonnie was more akin to chasing after the two of them for us more accustomed to the LA pace of driving and sending pins on Apple Maps. Between showing us spots, Quim would sync up to the jambox and play us beats he made, all while Hakeem spit sharp-tongued freestyles. Anytime a camera ends up on ’Keem, there’s a good chance he’s going to start rapping, but he was never satisfied with the results. “Nah, don’t use that one in the video.” After a few of his own beats, Quim threw on a West Coast classic and had everyone chanting “ALL EYES ON ’KEEM!” while Hakeem rapped. “I think that’s the one right there!” 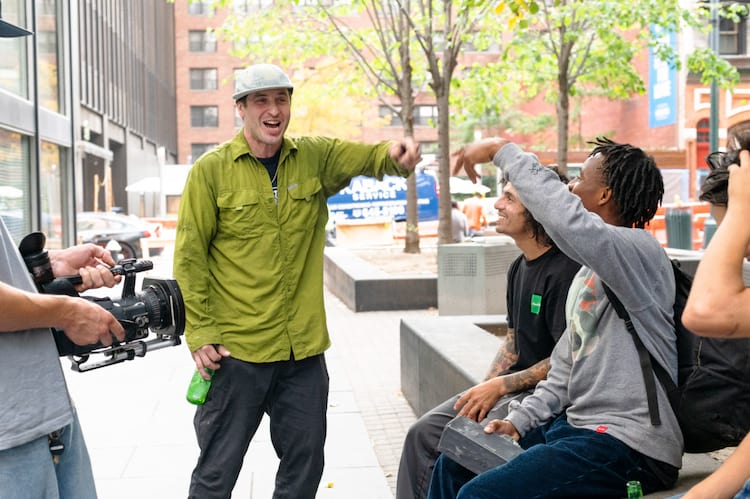 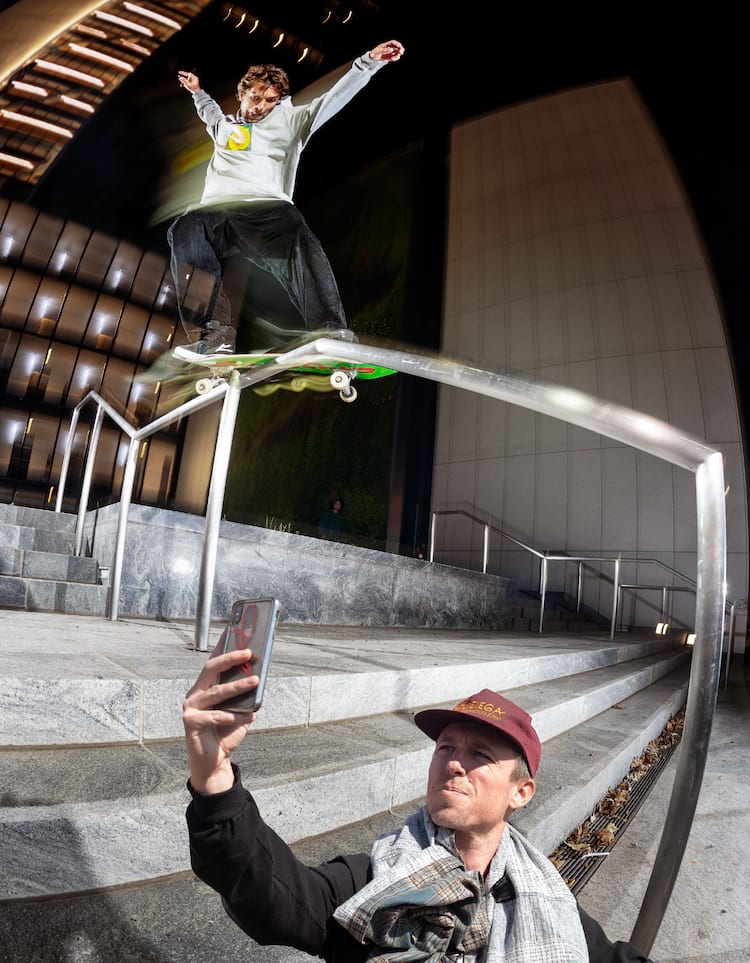 Capps, feeble pop over on some of Quim’s quality Newark real estate

Much like his rapping, Hakeem can be critical of his skating, as well. Anytime we’d film something, he’d make sure I knew that it was just for the tour video and the real heat was coming soon. With the sun setting on our final day of the trip, we found ourselves at an idyllic East Coast bump to bar. The exhausted crew marveled at the spot with no energy to muster any moves as ’Keem sprung into action to get one last taste of the crust. After a short battle resulting in a victorious frontside heelflip, Hakeem looked at me wide-eyed, “Now THAT’S for the Chocolate video!” 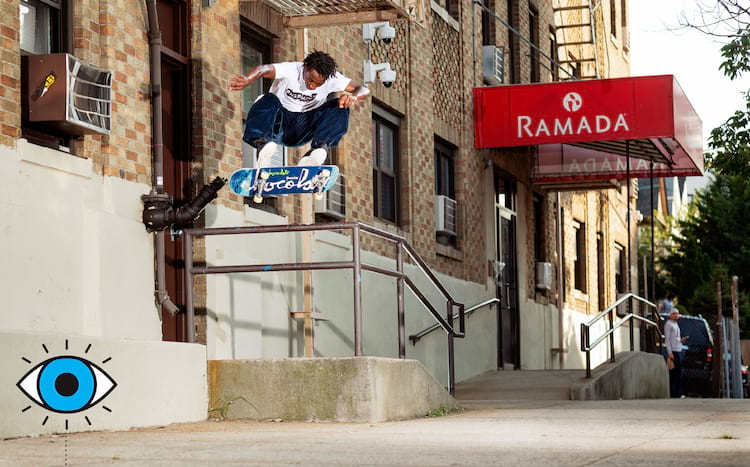 No one could take their eyes off Hakeem’s front heel in Jersey City—not even ’Keem himself, who proceeded to watch the clip 100 times over in the van

As we piled back in the van, the $100 per-diem wager conversation came up, Carl and ’Keem both wondering who logged the most footage. “Forget most clips, how about best clips? That front heel was a banger! Pay up, Carl!” ’Keem exclaimed. Both of them looked to me to see who had actually come out on top. But little did they realize, Capps had been stacking clips the whole trip and was the worthy recipient of their per diem purse. Time to pay up and take notes, boys.
© 1981–2022 High Speed Productions, Inc.