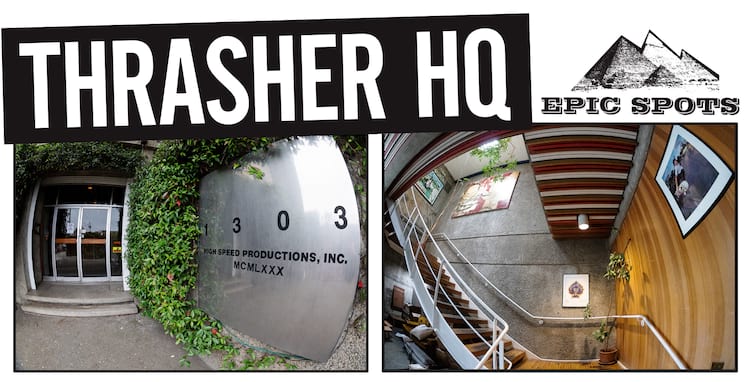 IF YOU WANT to know where Thrasher is located, the answer is: everywhere. We could even say some bullshit like, "It's in your heart." But we won't do that. The photos and videos which comprise a large part of Thrasher are collaborations from around the world. Pros, ams, staff and bros are part of the process. Burnett is down South. Atiba runs LA. Sieben is in Texas. No one knows where Lui Elliott is. However, we need a homebase for some things, such as product returns for that flame hoody that didn't fit your fat ass. High Speed Productions is the San Francisco heartbeat of the mag. This building has experienced too many stories, laughs and drama to ever fit in one article. Instead, here are some of the headquarter’s small details that make a house a home. —Adam Creagan

Hella skaters have sat on the ledge and gotten nasty tree sap on their pants. Rumor has it that’s why Rob Welsh never comes by anymore—he got zapped by the sticky-icky.

Amazingly, the boards in this communal line-up never go missing. In fact, the quiver of arrows is growing. Their bearings are rusted toast but they’ll get you to a taco truck.

We’re still looking for the kook who tagged the mirror. Listen to the bell, “ToyScratch69.” It tolls for thee!

Marsha’s Queendom. She skates more than anyone else in the building. If you hear carpet kickflips, don’t even knock.

There’s a legend the Big Brother dudes placed donuts here that were gobbled up. Later they supposedly sent photos showing those same donuts had been stacked on their dongs. It never happened.

Here’s where Jake did a sick wallride. He was in his 40s at the time. Even Drehobl said "Nah, nah" to this car transfer.

We were offered a raw deal to host a wifi transmitter for the neighborhood. The maintenance crew stomps around on the roof without notice, raining dust everywhere inside.

It sucks. You could be standing on it and not even notice it’s a spot. Joey Tershay had a Black Label ad here. Roger Browne managed a solid snap as well.

Eben’s been slangin’ ads here for 25+ years. The singer from Sublime lifted a guitar riff from Eben at UC Santa Cruz and put it on an album. Bradley tried to make things right but died before they settled the matter.

Purgatory. If you’re an unwanted visitor, this is where you’re told the person you’re looking for isn’t around. They’re actually hiding from you. It also makes those weird leather fart noises.

Mark Gonzales hurdled over this without putting his hands down. It’s hosted pizza parties and a few kinda lame sales pitches. Bastien and Tom Penny smoked weed here without asking but we didn’t mind. Tiago Lemos has an open invitation to switch back tail it.

Only two people know what’s in this locked closet and they’re not talking. Maybe it’s this thing from the April 1991 cover?

AKA Broadway. Here’s where you most often interact with co-workers. It beats Laser Tag, paintball or other corny team-building exercises for office morale.

Crows land on here and violently try to peck open large seeds. One of those dumb birds is gonna shatter the glass someday. Nevermore.

A tweaker stormed the building with a baseball bat and threatened to kill Jake right here. Not to be confused with the time Ed Riggins choked Jake out. Or the time Luke Ogden brawled with Jake. 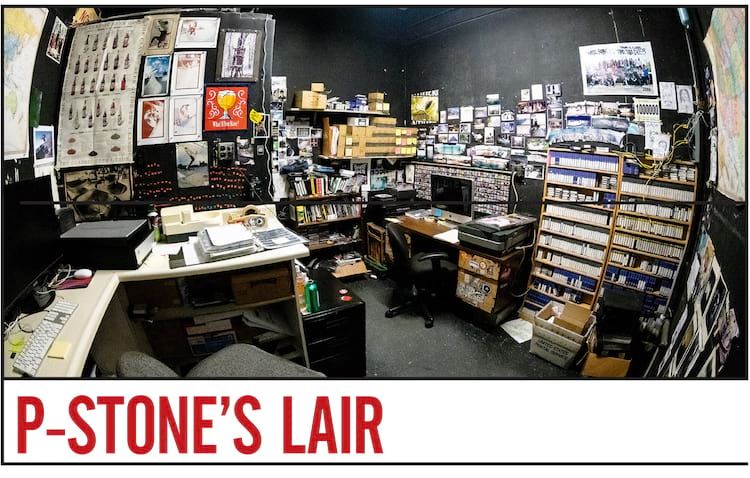 The smallest, raddest museum in the world.

The Jux co-founder, Robert Williams, has had two Thrasher covers. That’s one more than Muska and two more than Joey Brezinski.

The only skateable “spot” in the building. Numerous fools have snapped this tiny drop and slipped on the ice-like concrete.

No one knows what these things do except our Tech Support guy. He acts busy around them but we suspect they just make humming noises.

Billy Pepper was locked in this office after he threw fists with Jake in the hallway. He made his escape through the window. Well played, Billy.

A cash tournament led to hurt feelings and claims of cheating. Tony almost 86’d the table after that. Cam’s the best but never plays. Dan Z has a wack Drunken Monkey style and a possibly illegal serve.

Hubba wheels hot-chick ads were shot here. The stand-in "wheel" used for photo perspective was an old car tire found in a nearby swamp. Paul Zuanich used to swerve deadlines by napping in this crypt. We heard Austyn Gillette hooked up down here (but not with a Hubba chick or Paul).

Thanks so much for supporting the mag. No jokes. No sarcasm. That one shirt or that one hoody you bought makes all the difference. 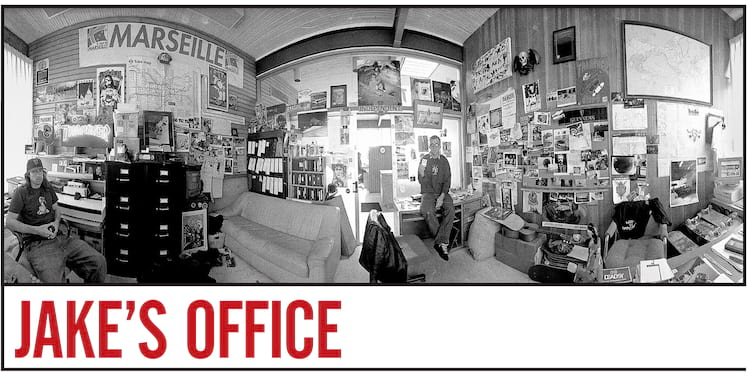 When Jake had visitors (and he had them often), he would put on the greatest show on Earth.