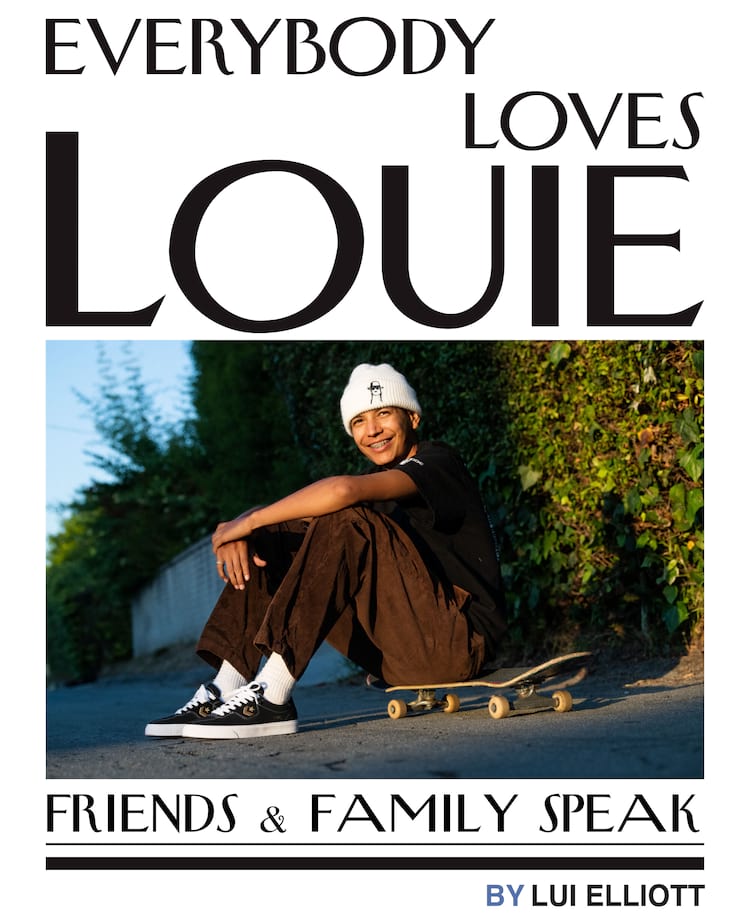 Louie’s always been a bit of a shy guy. Rather than running his mouth, he just skates. To get a better glimpse of the Cons superstar, his friends and family chime in and reveal what makes him tick. See why everybody loves Louie in our October ‘20 mag feature. 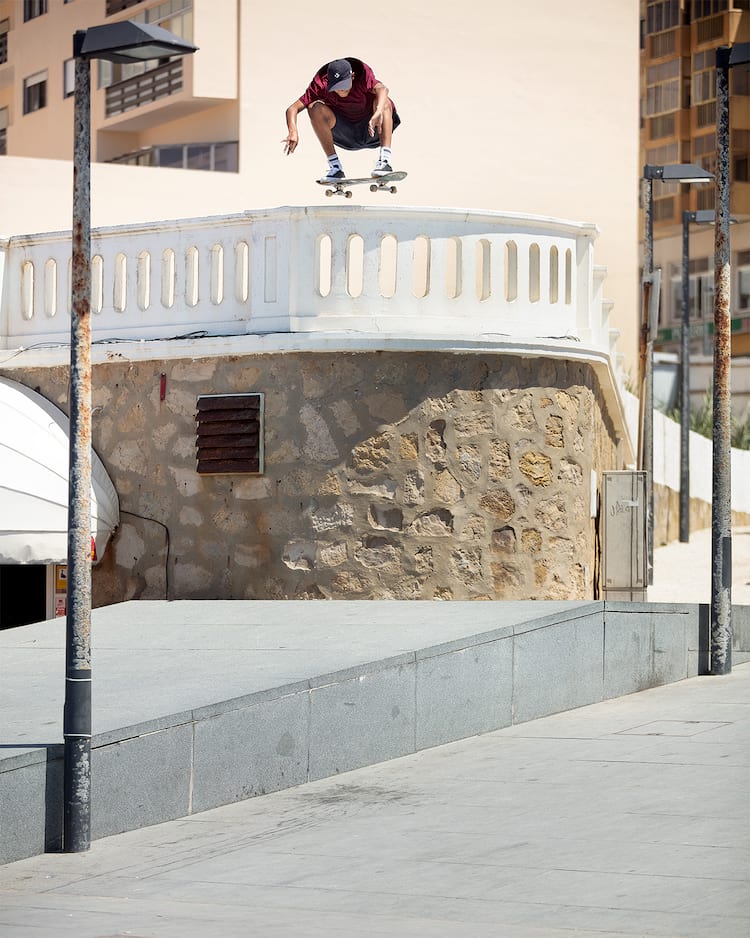 Louie is someone who always looks on the bright side, even when situations are abysmal. Whether it be that no one is skating good or the place where we are eating is taking forever and the food tastes like ass, he always brings a good vibe. Actually, I think his favorite word is vibe. I can’t tell if he’s saying it ironically or not, but he uses it to describe everything. He’s also one of the most genuine human beings I have ever met. He takes care of his family and friends so well that it puts the biggest philanthropist to shame. I am proud to call him one of my close friends and will forever answer that FaceTime call when it rings.

Louie has to poop a lot. He bought a portable toilet seat that’s basically a toilet seat without anything underneath it. He shit onto a used board yesterday; he put it underneath the chair. I asked him if he tied a bag to it but he didn’t. He just used the board. The only advice I would give Louie is that he should go get himself checked out to see what’s wrong with his stomach so that he stops shitting all over the place. 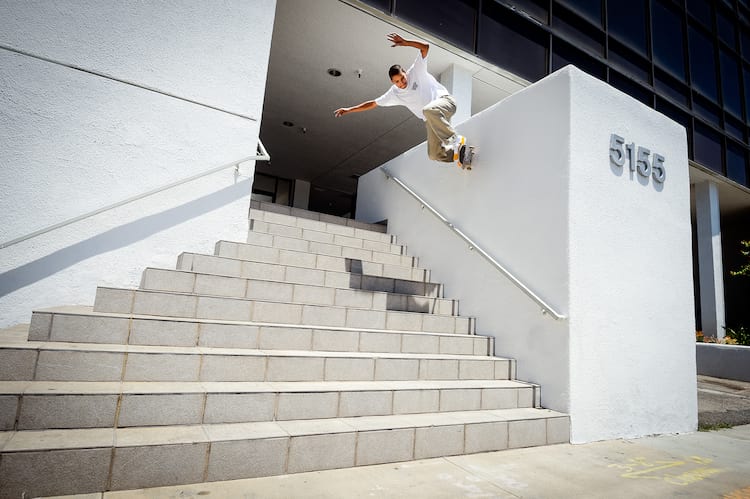 When you poop all the time, you’re rarely full of shit. Ollie to wallride, major vibe     Photo: Burnett

The kid ain’t a kid no more, tailslide kickflip out     Photo: Colen 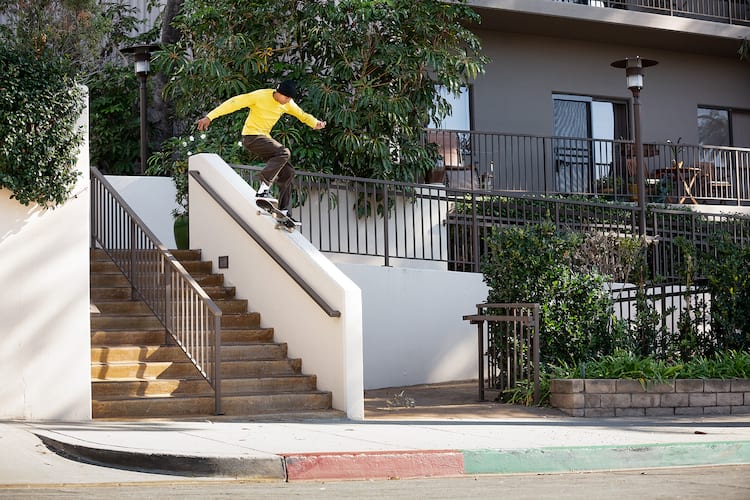 To me, Louie hasn’t changed at all over the past 25 years. He does grown-up shit now but still acts the same. As far as his personality, he’s a bit quiet and on the shy side with the fam. He’s pretty chill, sits back and hears everyone out. Going on trips with him when he was younger was incredible. I just reminisce about that stuff nowadays. It was good to be there, to see him get along with everyone. At first, I was a little concerned because I didn’t know what the vibes were on the trips—I could imagine what they were but I was concerned about how they would treat each other. The best part was that I got to see that everyone took care of one another. I got to go to different countries and have the same experience he was having at the time. I feel very privileged as a parent, especially to see him have fun. The biggest shift that I’ve seen is when it comes to responsibility. He took control of everything when it came to his career with sponsors and paying his own bills. He’s a responsible kid. I have to give it to him. At that age, that was not me. As a parent, you always see your kids as kids. I’m very proud of him, to the point where I view the way he approaches everything and take notes. I need to be more focused like him. When he makes up his mind, that’s it. There’s nothing you can do to change it. All the moves that he’s done with his career after he turned 18 have pretty much just been his choosing. And so far everything has worked and panned out the way he planned it. He took the bull by the horns and ran with it. I think in the next couple of years, he’ll be invested in anything that has to do with skateboarding. That’ll be his path. The only thing I could tell him is to go with his vibe. Keep doing the damn thing. He’s doing it. No regrets. 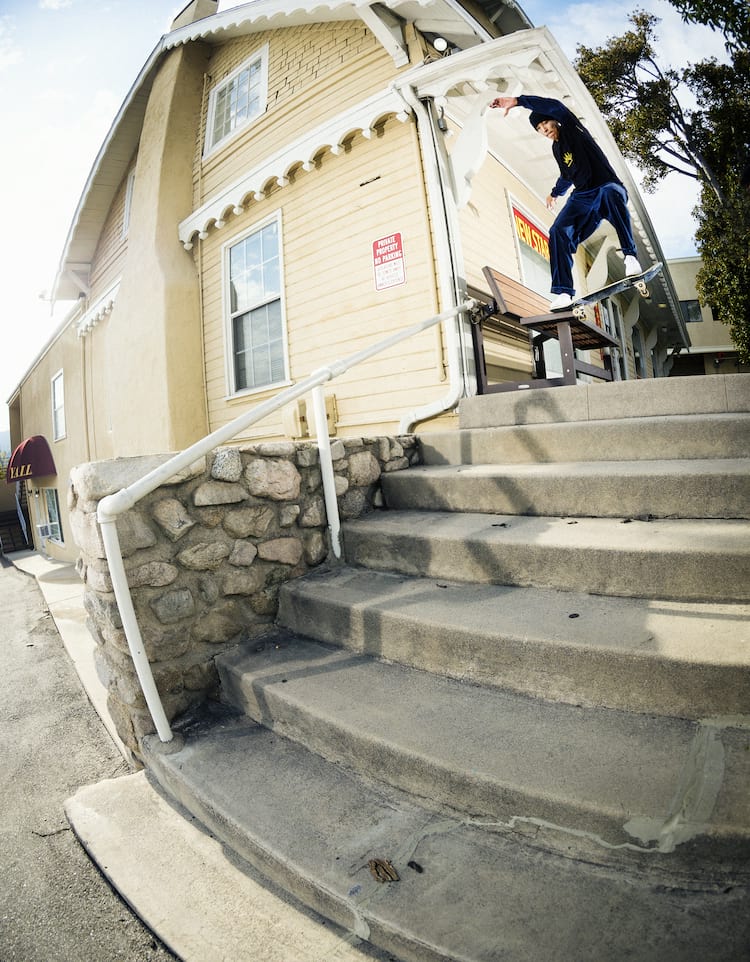 Louie made up his mind and took the bench by the tail     Photo: Burnett 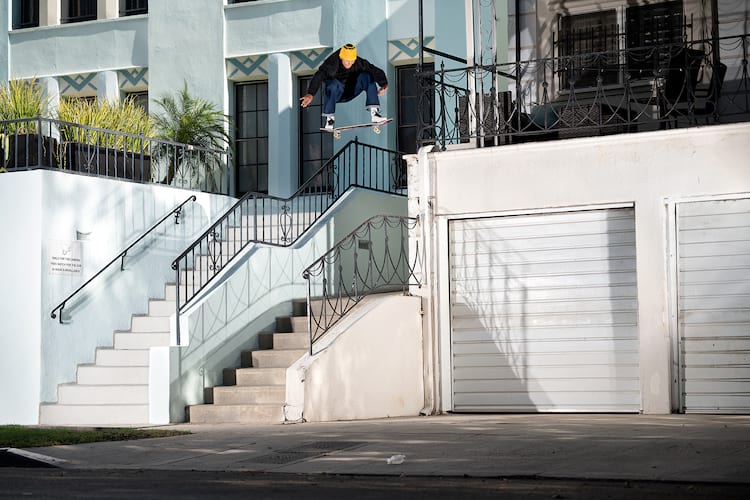 Frontside 180 over the second stack for good measure      Photo: Coulthard 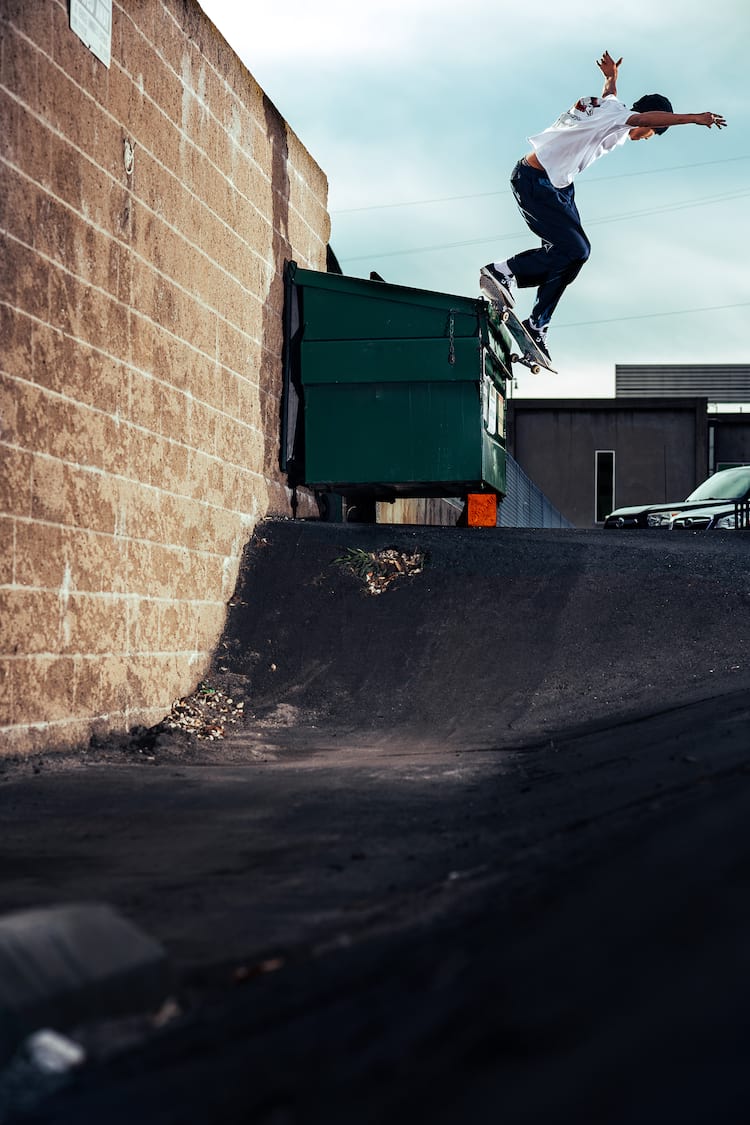 He’s usually the calmest dude with an it’s-all-good-we-can-figure-it-out attitude. Don’t sweat it; don’t freak out—always the same way. I saw some dude drop his beer at a party we were at. I got mad but Louie looked at the guy and started partying with him. It’s all good. We’re homies. 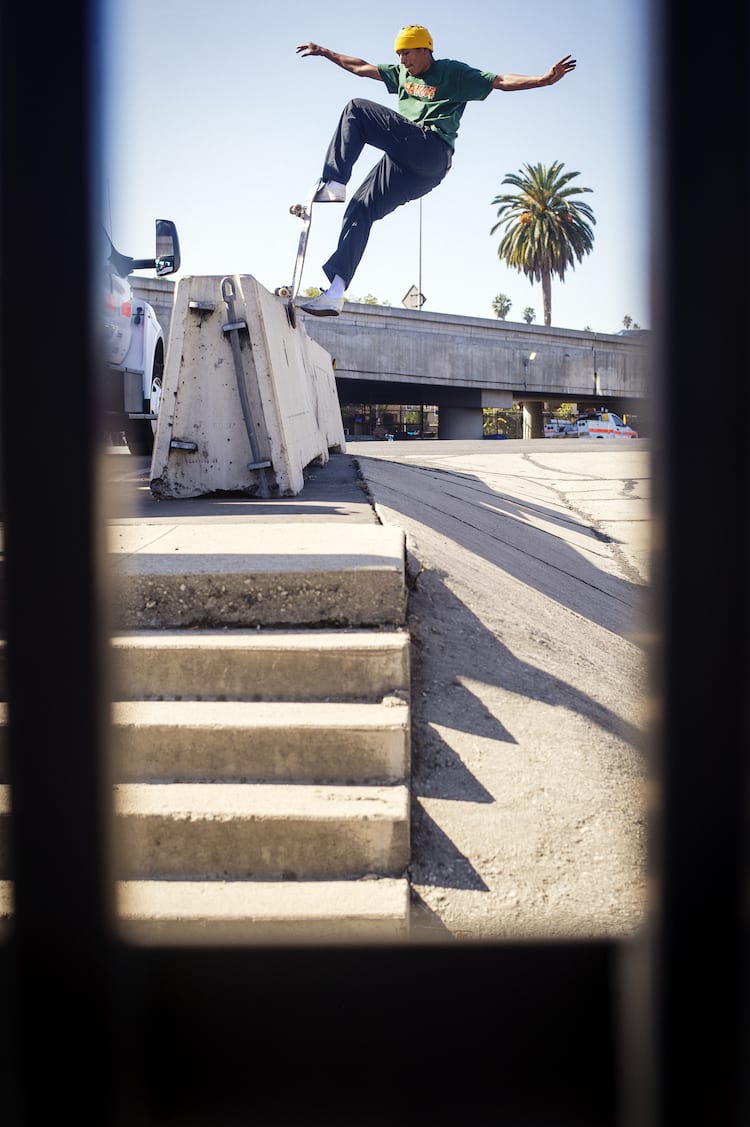 No transition, no problem, Louie figures out the front blunt      Photo: Burnett 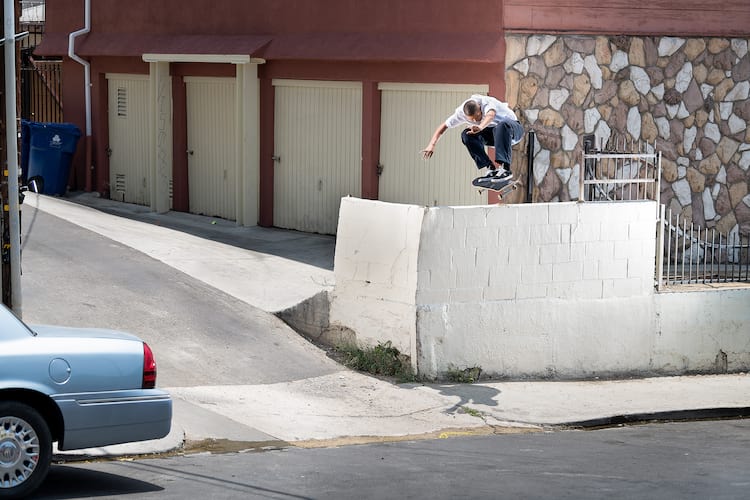 This spot’s been in the family. Heelflip at a recently-resurrected Dylan cut    Photo:Coulthard

Louie’s always the last man standing every night. We were in Cancun for his shoe trip and we skated all day then hit the beach. We left the beach and went straight to the club. Kaue, Louie and I were there in our trunks, forcing bottle service down our throats because Louie ordered it. I was trying to leave and log footage and he wouldn’t let me. I had to sneak out the back. It’s impossible to leave when he’s drunk. It just won’t happen. He’ll block the door and tell you that it’s only 4 AM. You either fall asleep there or zombie out the next day. He never gives me shit the next day when I slip out, though, because by then he’s come to his senses and knows he should have left at that time, too. He goes in; he’s fun. 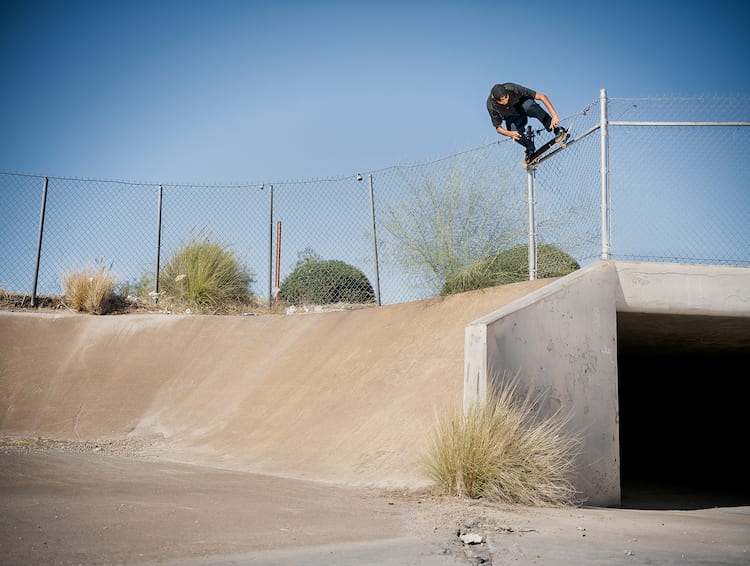 I think the first time I met Louie was at the Culver City skatepark, but Louie been popping so I had for sure seen him around. But I think that was the first time we actually introduced ourselves. I never really thought that we would be on the same teams. I think that’s what made us better friends, though, ’cause it wasn’t like, Oh, Louie skates for this so if I skate with him I can get on X,Y,Z. How Louie got on FA was one night in the club, we had a long talk about it. He told me he had some shit to handle and I let him know when that shit was handled he should come home. Simple. I knew it was happening. I set it up. I’m happy Dill and AVE agreed, even though I don’t see why they wouldn’t. Who’s gon’ vote against Louie? The team dynamic? First of all, this is Louie we’re talking about. Second, Fucking Awesome is a family. It’s not them fake family them other companies try to sell. I really mean it. We all got love for each other. As for my favorite part of him being on the team, more than anything, it’s just knowing he’s happy where he’s at. Louie deserves that; he works so hard. My advice to Louie is to keep shining and being the beautiful and pure being you are! You inspire so many of us to go hard and you keep it fun, always. 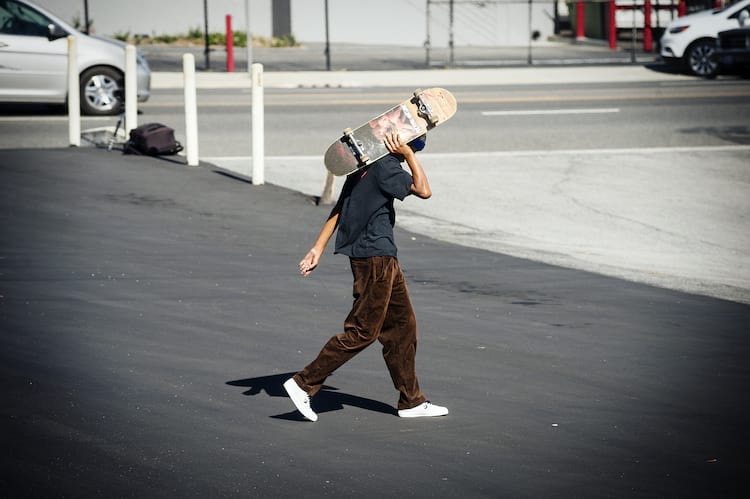 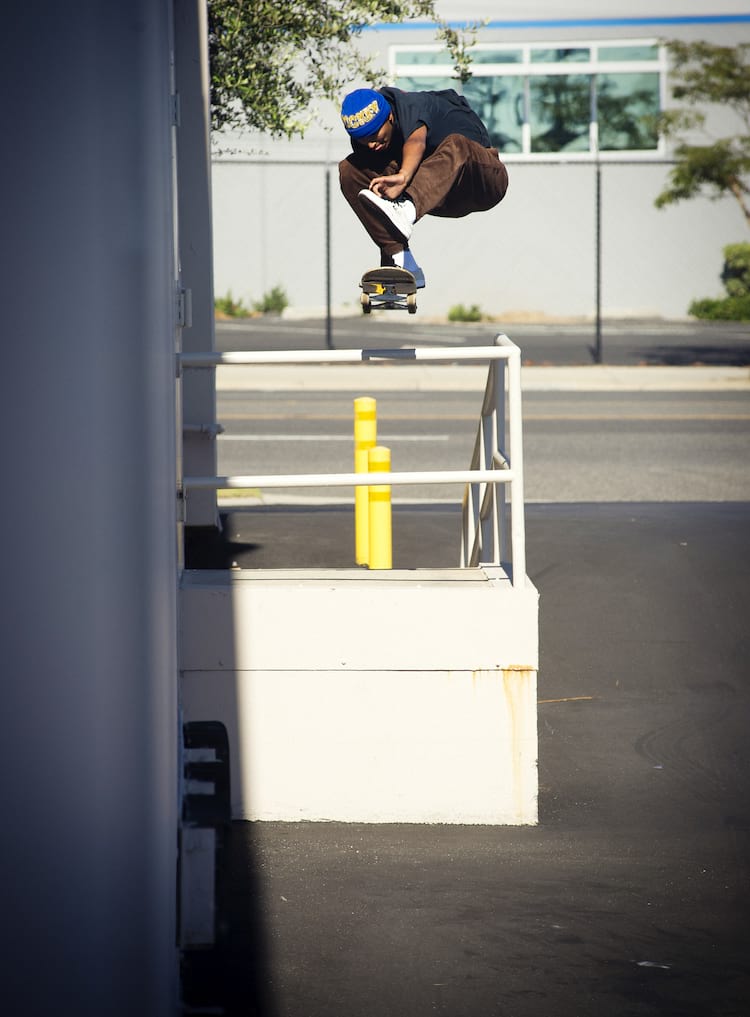 No question, Louie has a Fucking Awesome one footer     Photo: Burnett

Tailslide transfer to kickflip, quick ollie over the gap into the bank—definitely no time to chill     Photo: Burnett

There’s this hilarious thing that would happen on trips when we were younger. His dad used to come on trips and whenever we would be in the airport or something, we would hear this loud fucked-up whistle and Louie would just bolt off running to find his dad. I feel like I’m the only one that caught on to it because I spent so much time with him. Louie will have your back to the absolute fullest. Even though he’s not much of a fighter, he’ll fight someone for you. He's so stingy but will also ball out out of nowhere—buy everyone dinner or some shit. I love him like my brother. 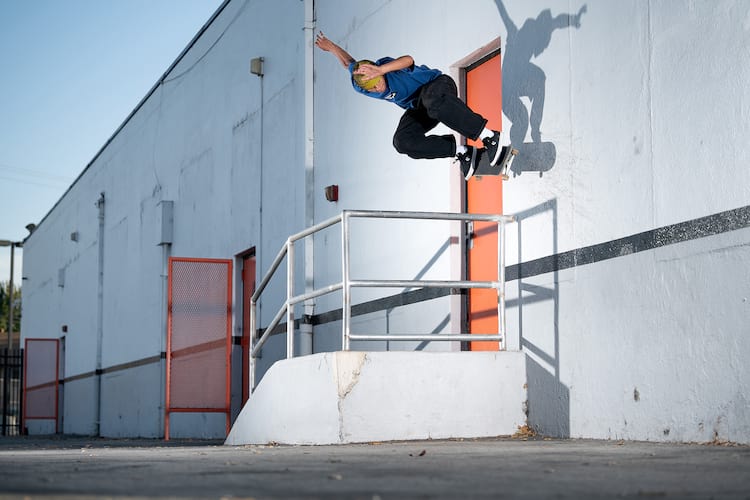 Not much of a fighter, he prefers to brawl with the walls. Heelflip wallride     Photo: Coulthard

There’s a saying that goes, “You get what you put in,” and Louie puts a lot into skateboarding or whatever he’s doing, and you want to reciprocate the same energy back. I really feel like we can depend on each other. He’s such a pro when it comes to his process and the way he does things. He knows when he wants to skate, when he wants to party or when to chill. The only thing I want to tell him is to not let the fire burn out. He brings so much good energy and has the desire to work hard, to be a good person and help others. He’s only 25 and I really can’t wait to see another 20 years of Louie. 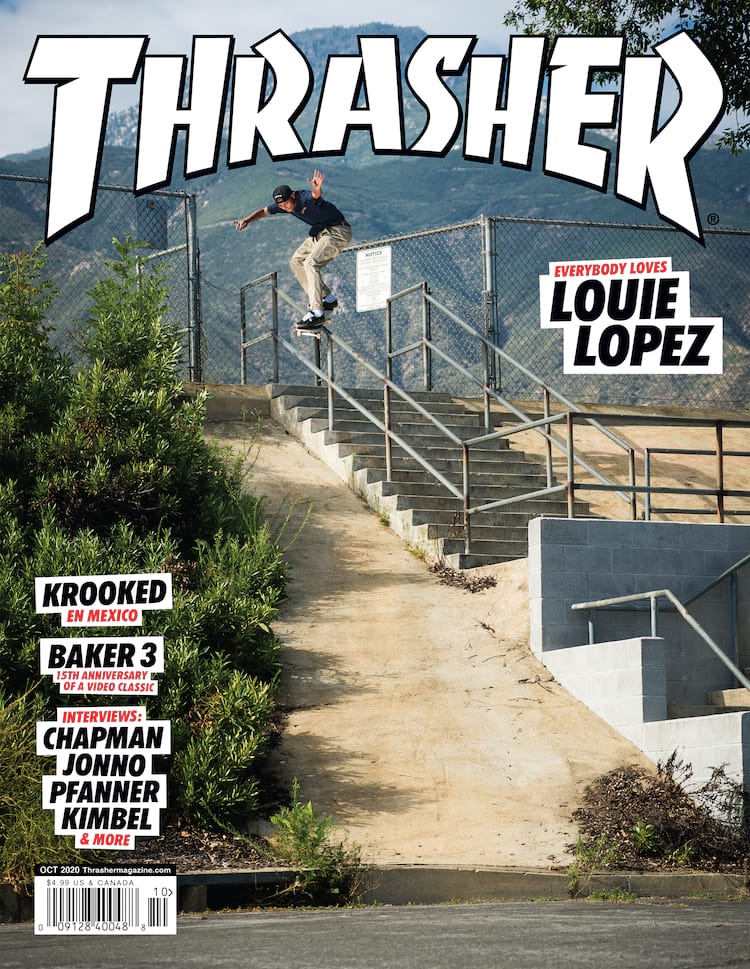 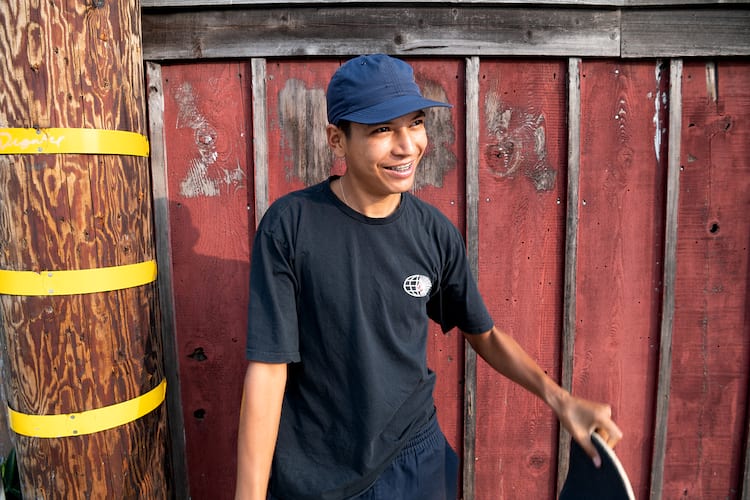 I spent so much time at Louie’s house when he was younger and he’s really similar to his dad. I logged countless hours in his backyard, drinking, getting to know his family and spending the night. His family wilds out. It’s a good hangout over there. One thing he has in common with his dad is that he can fall asleep anywhere, anytime. We went on a trip once and they both sat next to each other, fell asleep before we took off and didn’t wake up ’til the plane landed. It’s insane; I’ve never met anyone like that. 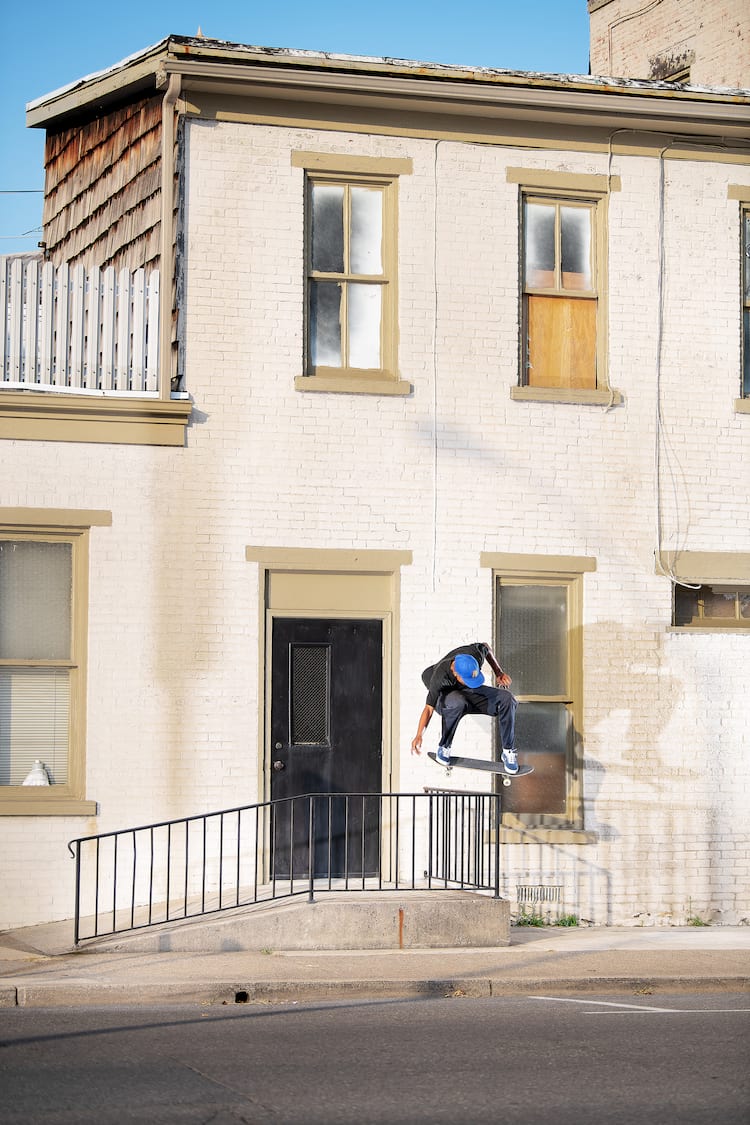 Wake up, Louie! It’s time to full Cab a bump to bar 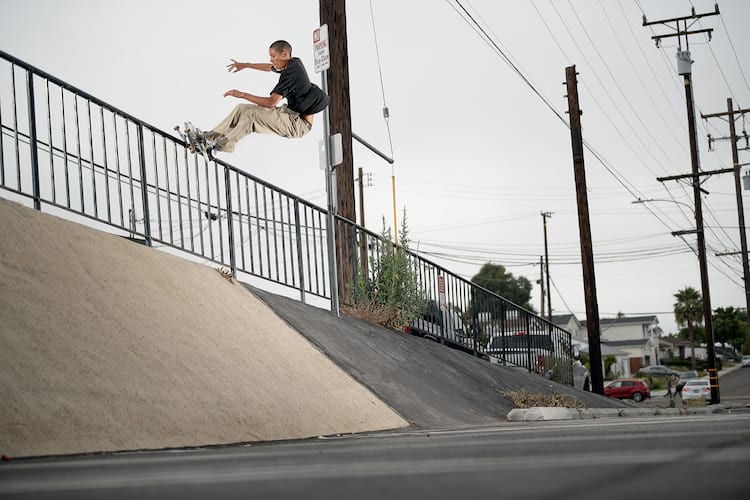 A top-rope 5-0 is always cool, but matching your outfit to the spot is ice cold     Photo: Coulthard

I usually don’t throw out bets too often but while we were filming for Purple I lost one to Louie. We were at a school in La Crescenta filming his switch 180 over the rail into the bank. I got too stoked and told him that I would shave my head if he landed it. Then he just did it. I had certain stipulations, like he had to be there when I did it and I would shave it with a number-three guard. We were both super busy at the time and six months went by before we were on a trip together. Finally, we found ourselves in Boston and Ben Chadourne told us that he brought along clippers. He started to cut my hair and I asked, “Are you sure this is a number-three guard?” He replied, “What do you mean? This is a beard trimmer.” My head was bald instead of just buzzed. I hadn’t shaved my head like that since I was 16. 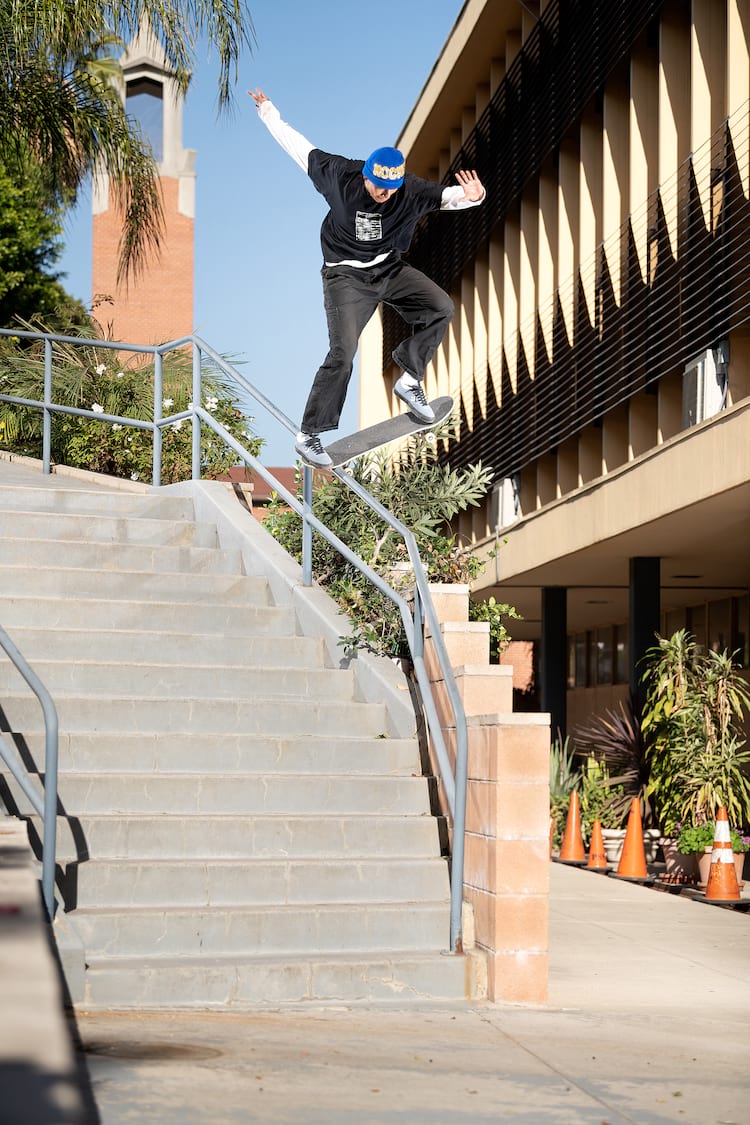 Trimming some off the top with a weed-eating back blunt   Photo: Coulthard 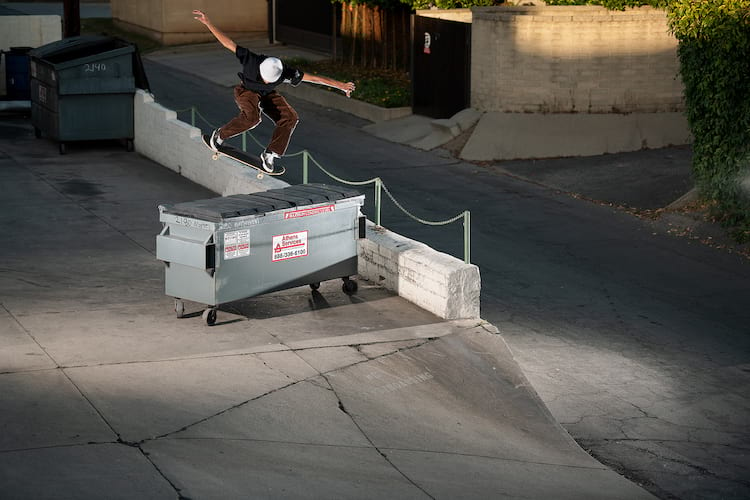 Louie’s dumpster destruction continues with a back 3. Always bet on Lopez     Photo: Coulthard

From my perspective, I’ve always known he was the best skateboarder but I never thought that anyone else thought the same thing. Skating with him, I’ve personally seen him do every trick. I feel like he has such good taste and the way he makes his video parts look is part of it. He could put out the gnarliest, most ridiculous part ever if he wanted to, but he knows what he’s doing and chooses to do things the way he views as tasteful. I always thought he was great but it’s amazing to see that so many other people in the world love and appreciate him in the way I do. I love seeing that Louie, who’s such a genuine and amazing person, gets the recognition he deserves. He sets a good example for other kids who want to be professional skateboarders. 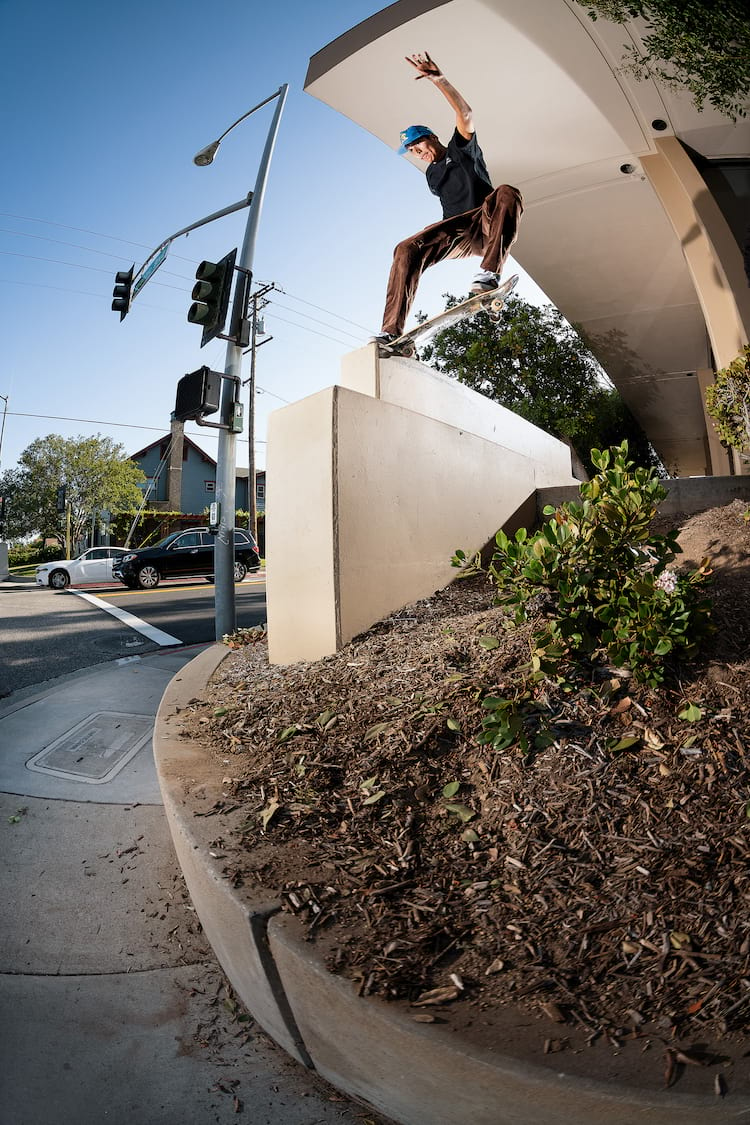 Q: What do you call a golden child when they grow up? A: Louie Lopez. Nollie half Cab crooks, he really is one of the best
© 1981–2023 High Speed Productions, Inc.