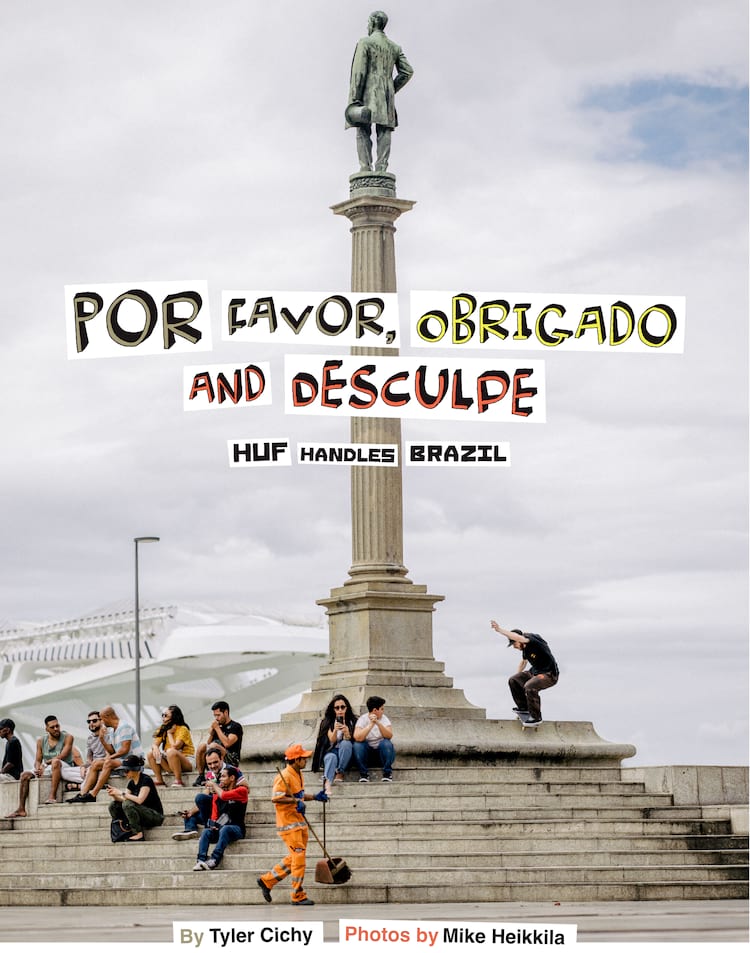 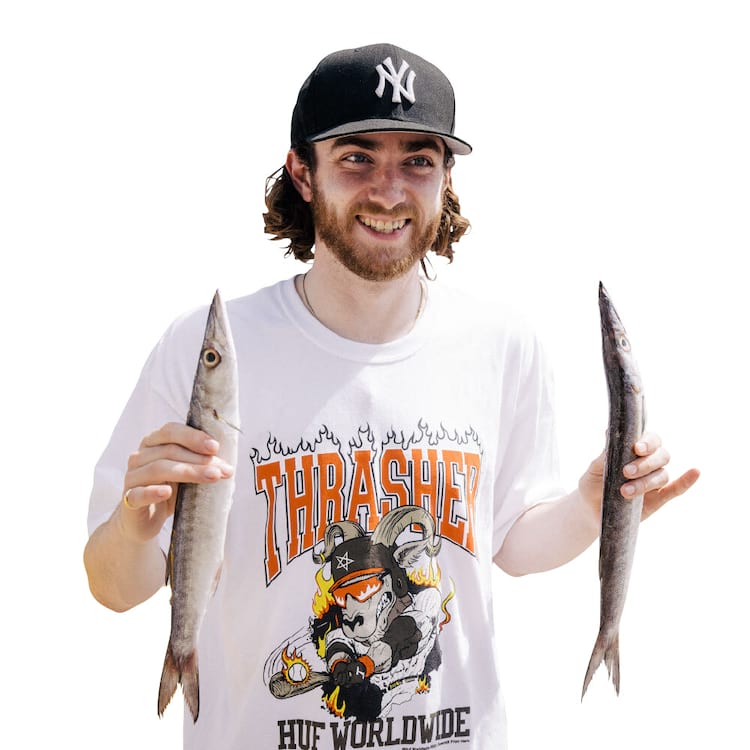 To be honest, Brazil has never been on my radar in terms of skate travel. No real reason in particular—other than my own negligence—it’s just never crossed my mind. When I started giving the crew a heads up about the trip details, Brad Cromer said, “I never thought I would go to Brazil.” When questing for unskated terrain it seems an unlikely destination. São Paulo and Rio de Janeiro’s rich skate history, a long list of ABDs, crusty spots and the US embassy’s Level-Four warning, “Do not travel to Brazil due to crime,” caused Level-Ten concerns. We threw caution to the wind, though, and went ahead and bought our airfare. With the Huf team’s one agreeable meal being açaí, I figured at least breakfast could be easy. Nothing, however, comes easy for an American in Brazil. Small necessities like getting water can turn into hour-long searches to find a store—which might very well be empty or closed when you get there. When you do find what you need you double up—it felt like we were doomsday prepping. We had so many drinks and snacks on a countertop one day that the whole thing—register and all—flipped over from the weight.

Stacked end-to-end with scenic spots and some of the hottest names in the game, our collab vid with HUF deserves a rewatch 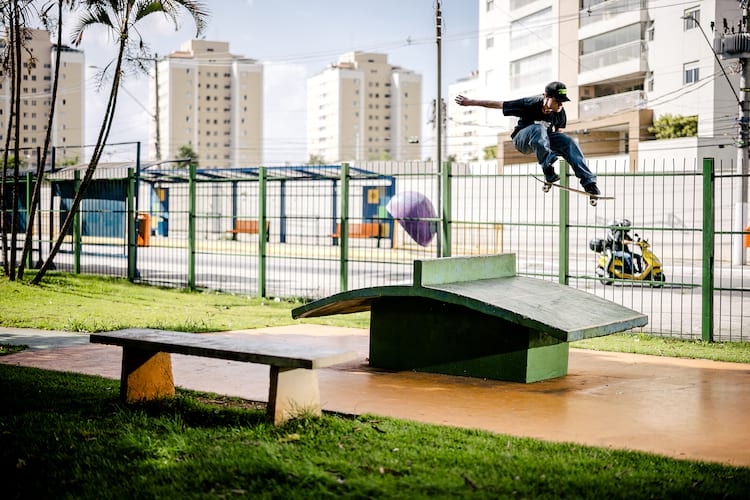 Nick Matthews, quick up and over. Is this a ping-pong table? 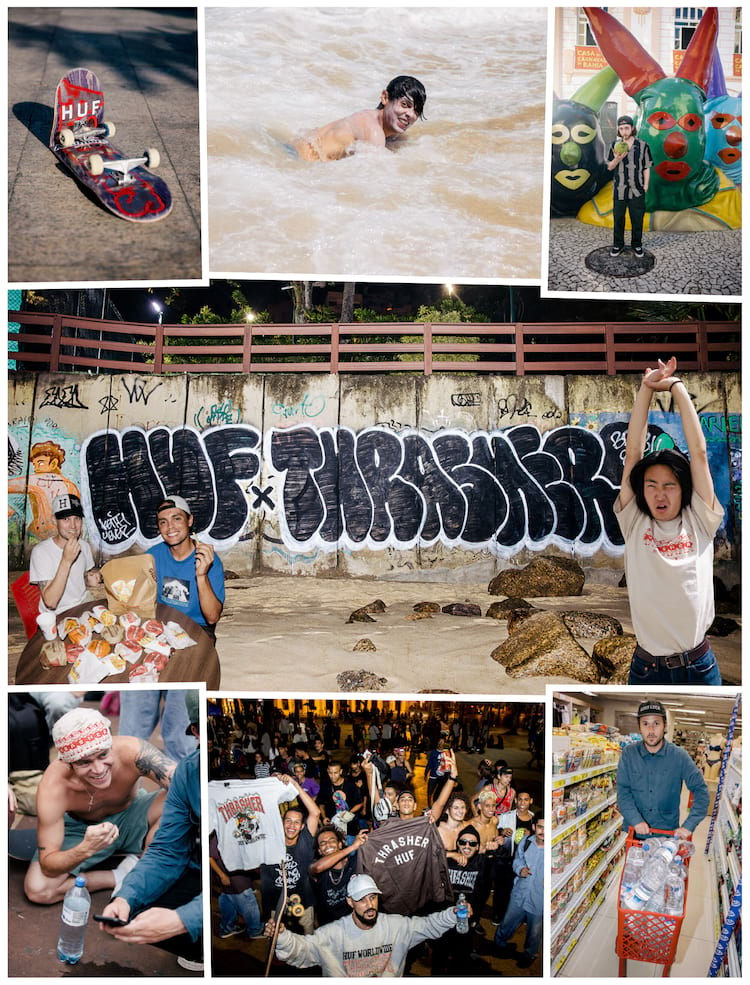 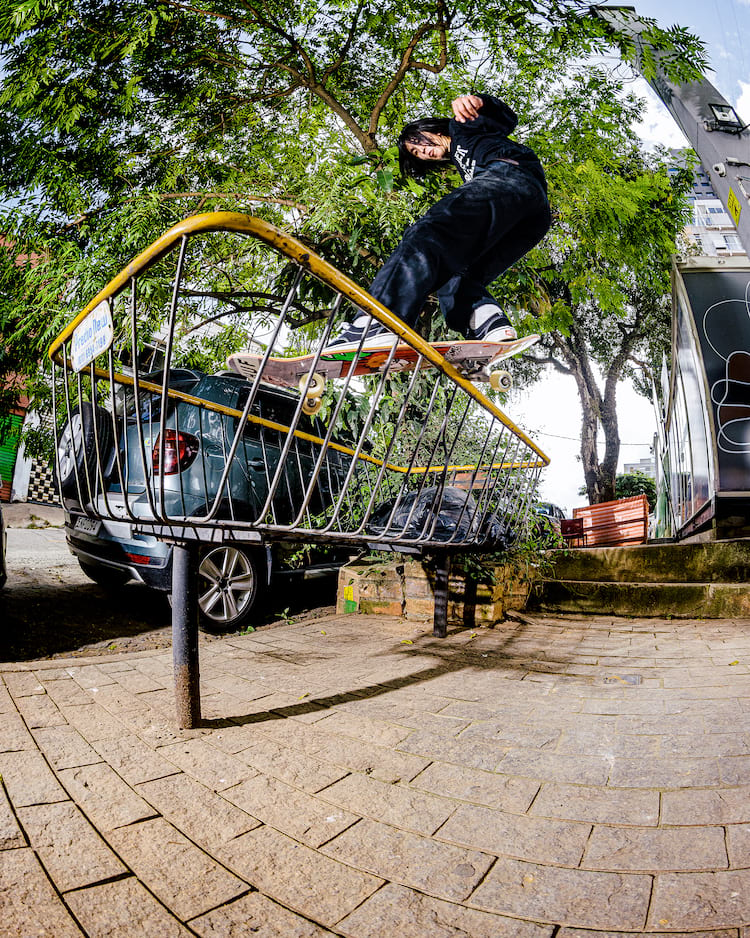 Daiki Hoshino traveled 30+ hours and Ubered straight to the first spot where he got three tricks. Yeah, Daiki! 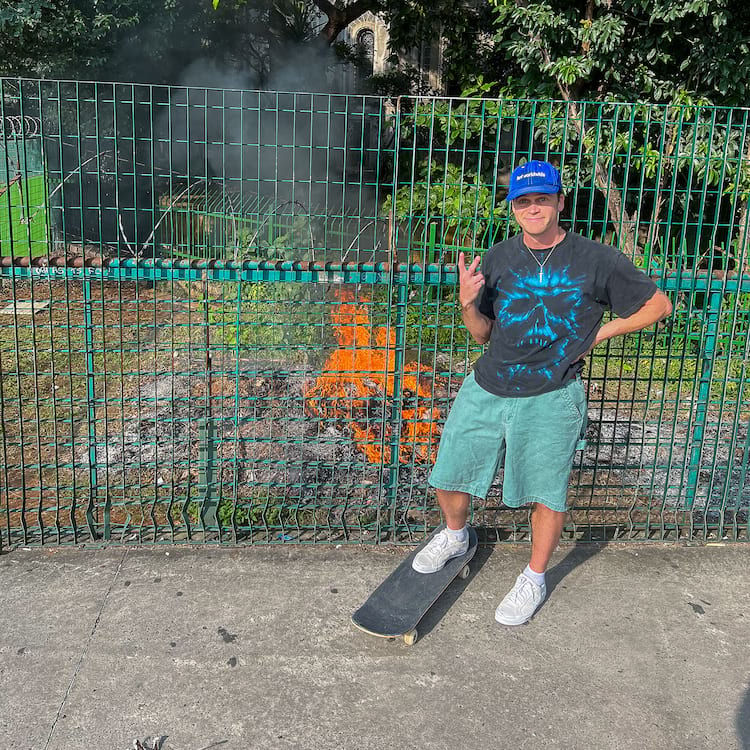 NOT YOUR TYPICAL BBQ
Fresh off the plane, first day in São Paulo, we pushed around for a bit. While checking out one of the local hybrid skatepark/plazas we saw a group of cops burning a large pile of police uniforms. Sem fotos! 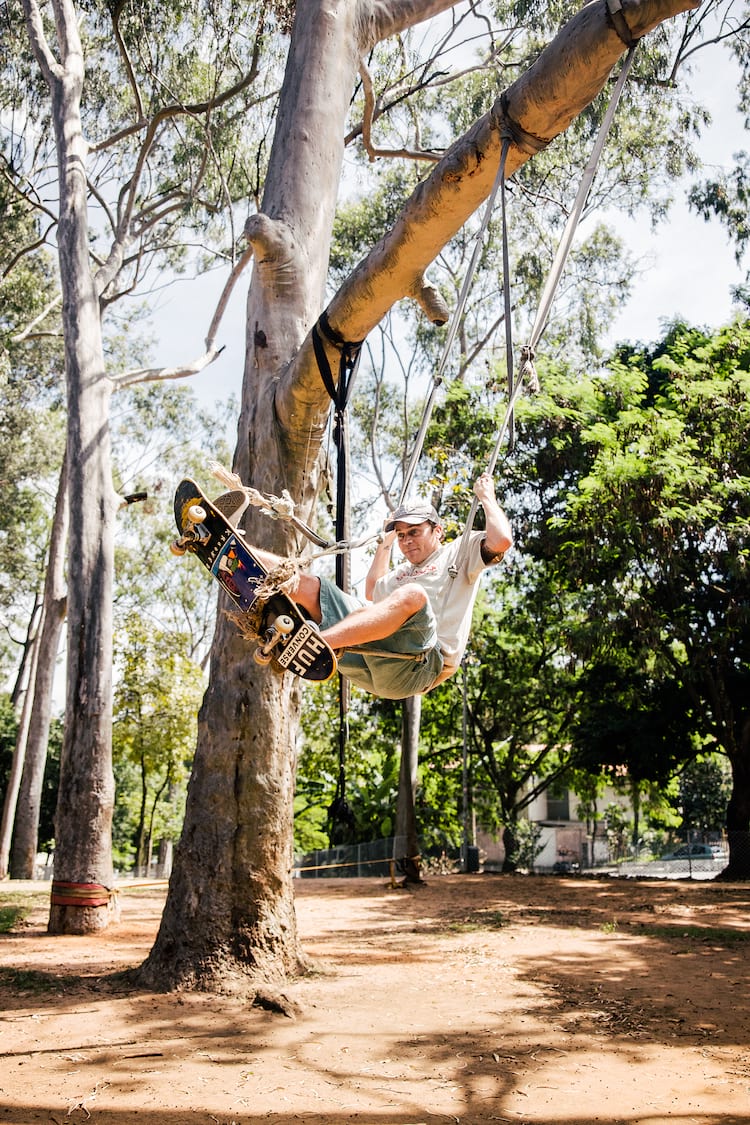 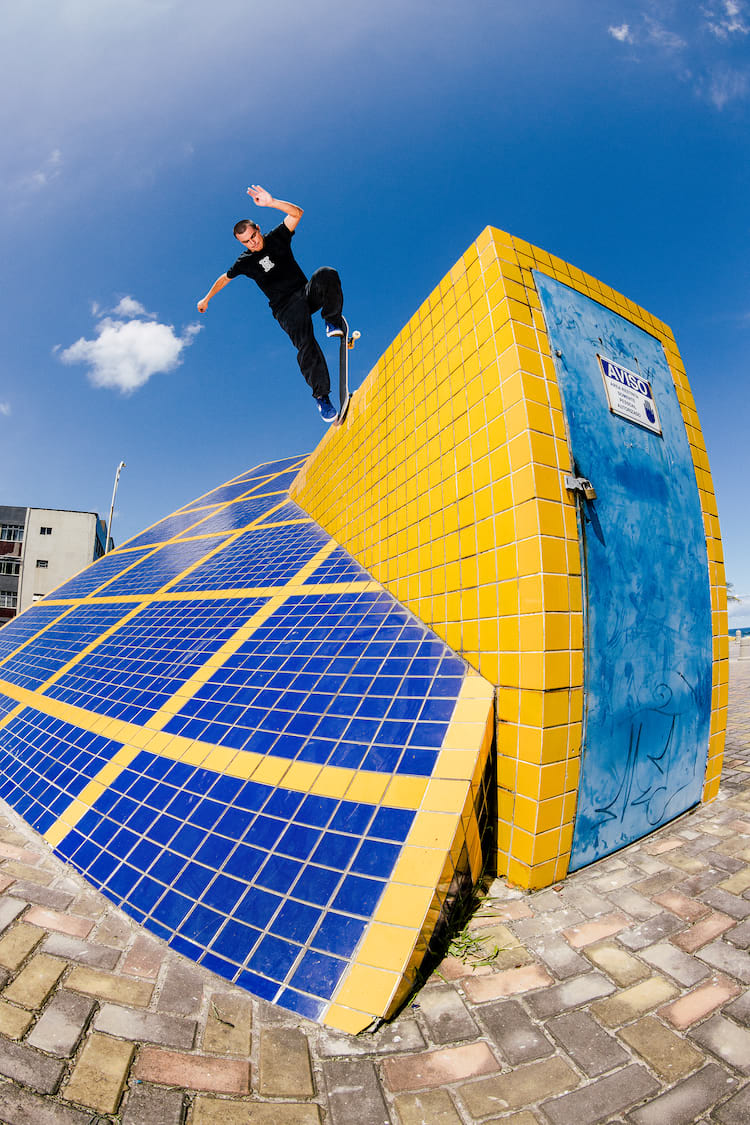 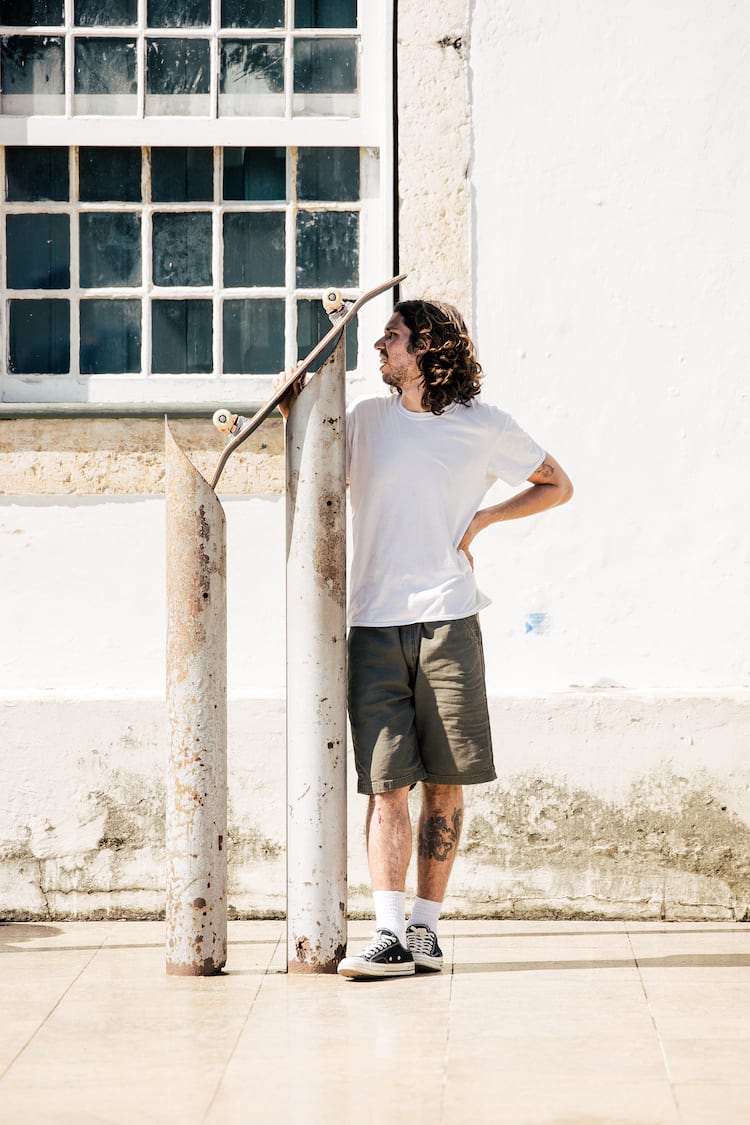 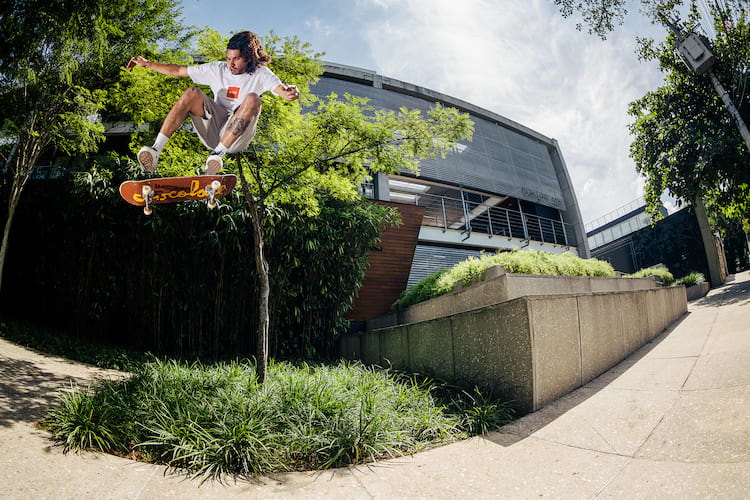 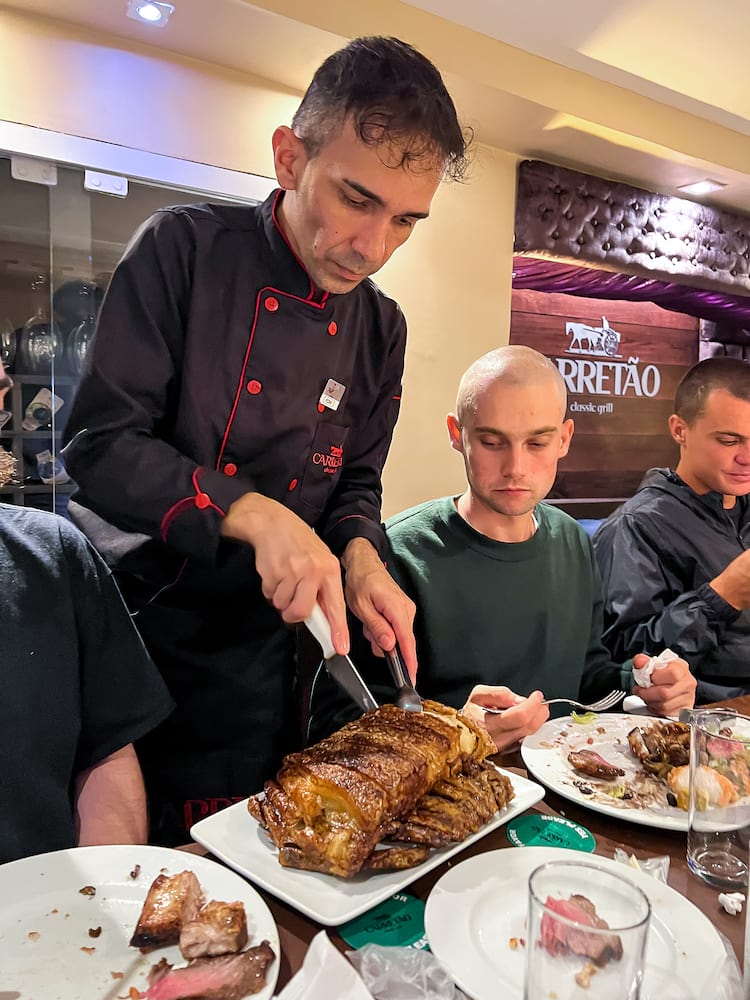 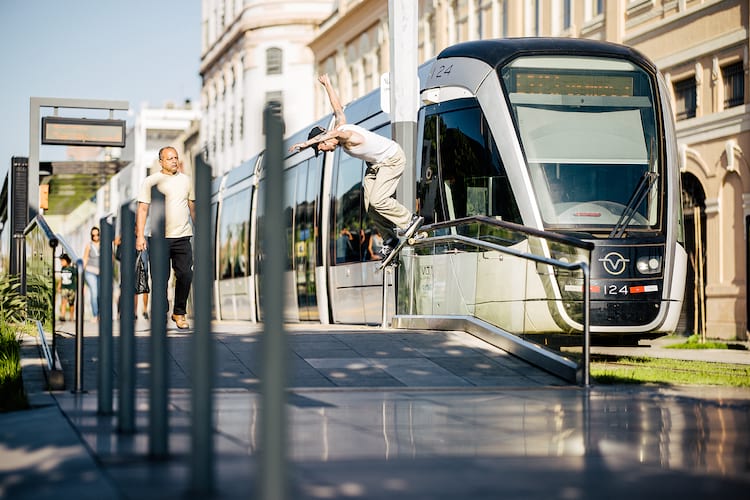 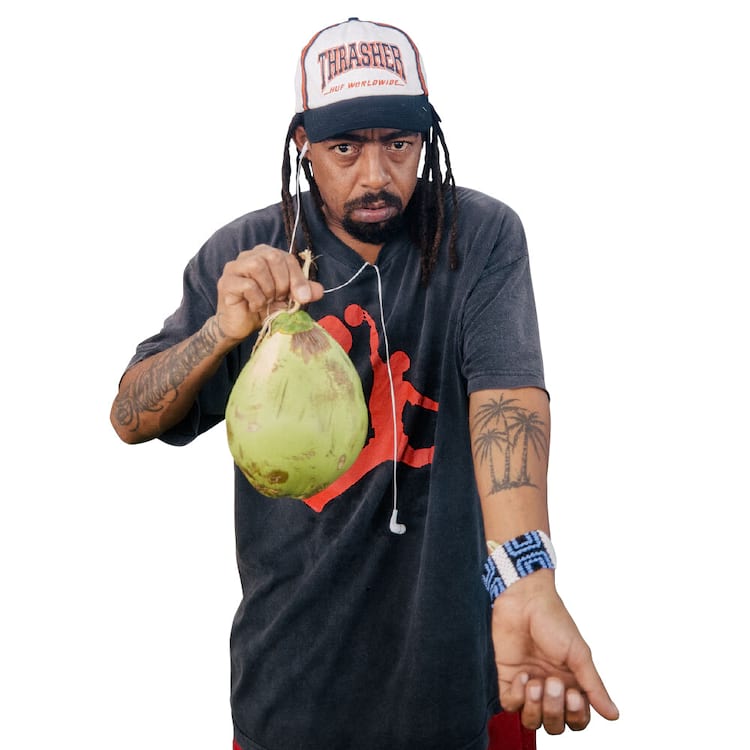 THREE LITTLE WORDS: POR FAVOR, OBRIGADO AND DESCULPE
With a crew this size, meeting at the van at 10 AM meant first spot by 1 PM. If you were smart enough to eat breakfast at the hotel or lucky enough to find midday açaí you were in good shape. By the time dinner rolls around you have a crew of 16 “hangry” skateboarders bombarding your restaurant with a three-word vocabulary—ordering two meals each or a ten-course mystery cheese/meat platter. 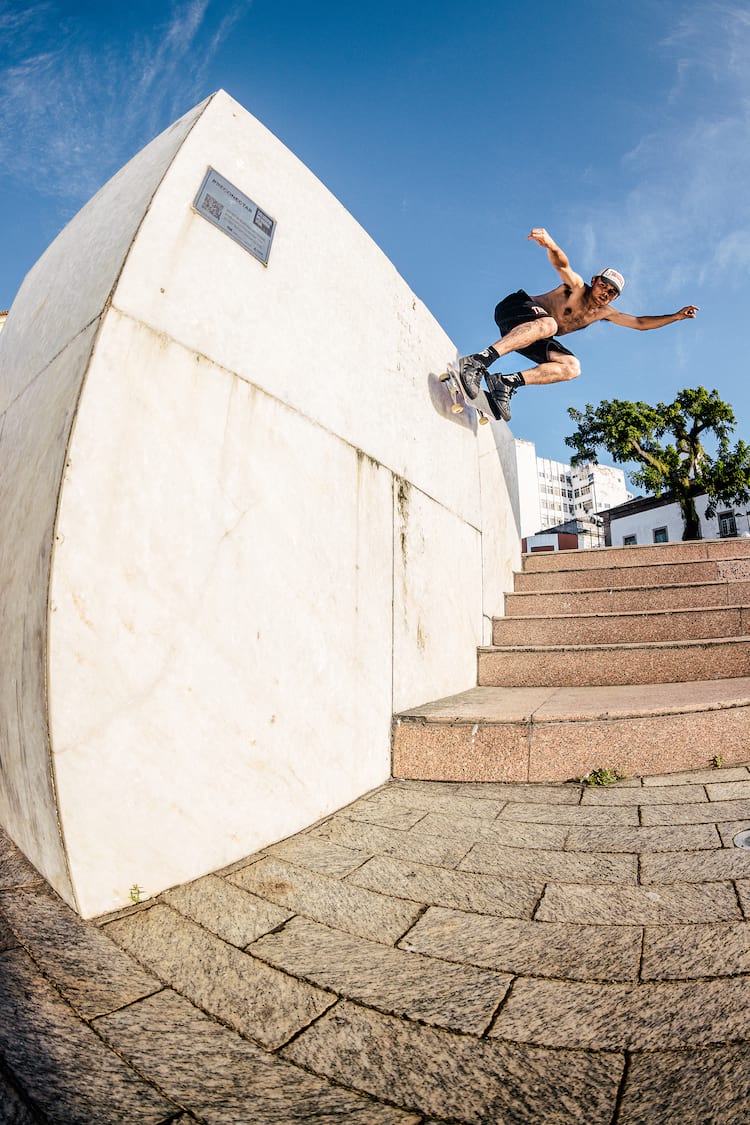 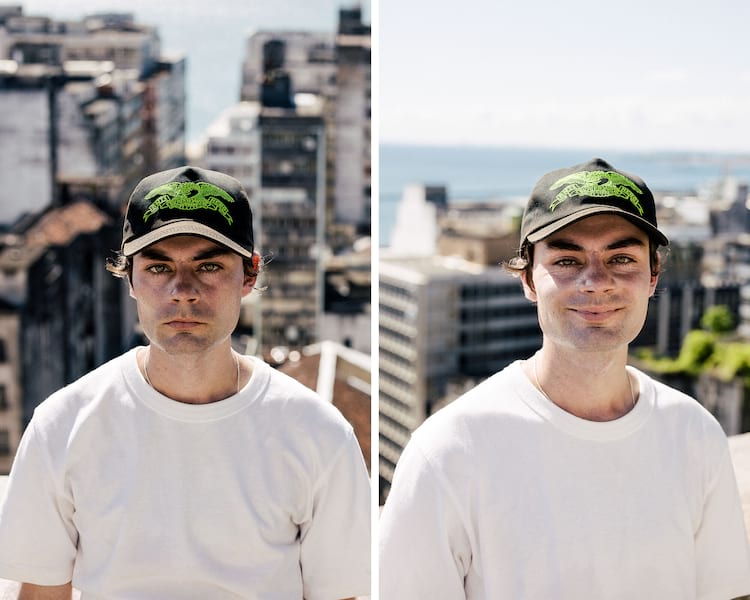 The Many Moods of Nick Matthews 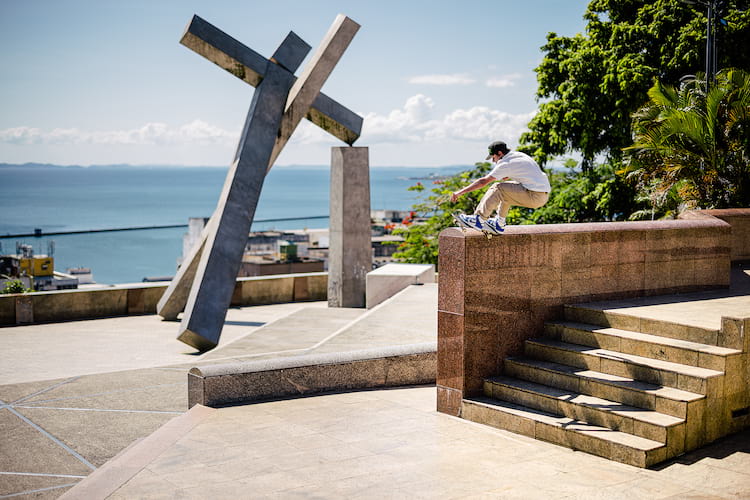 At the most popular selfie spot in Salvador, Nick Matthews caught a high 5-0 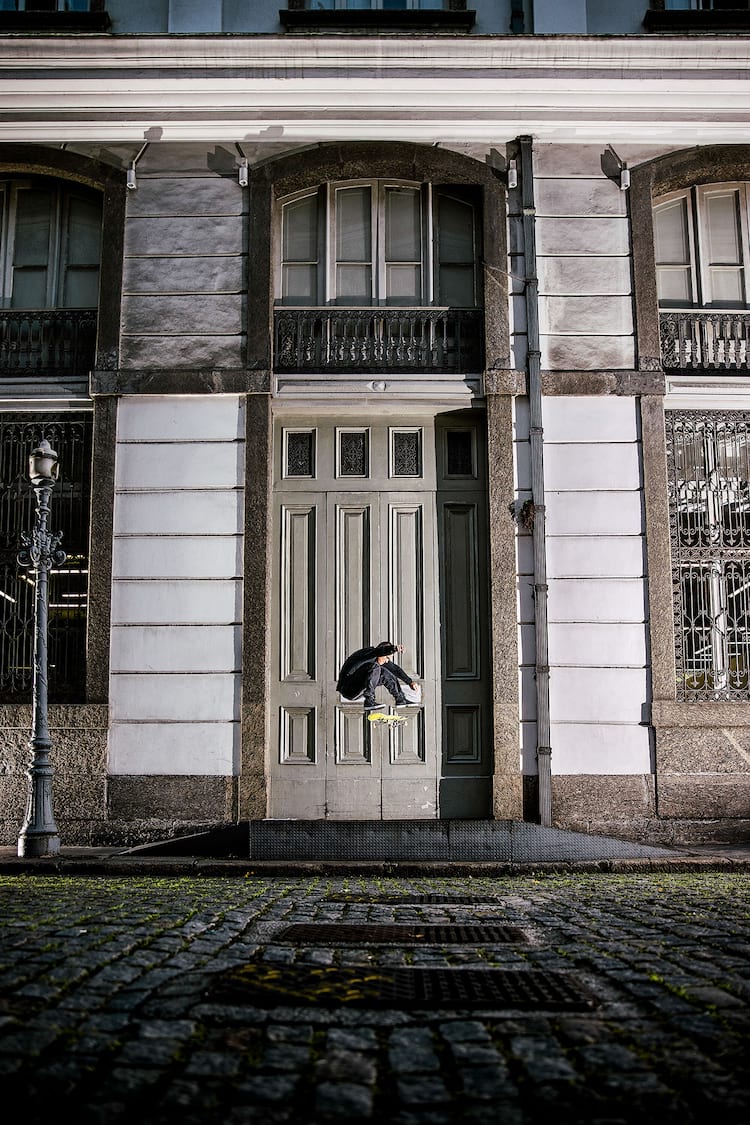 Mason front heel from bank to bank in Rio 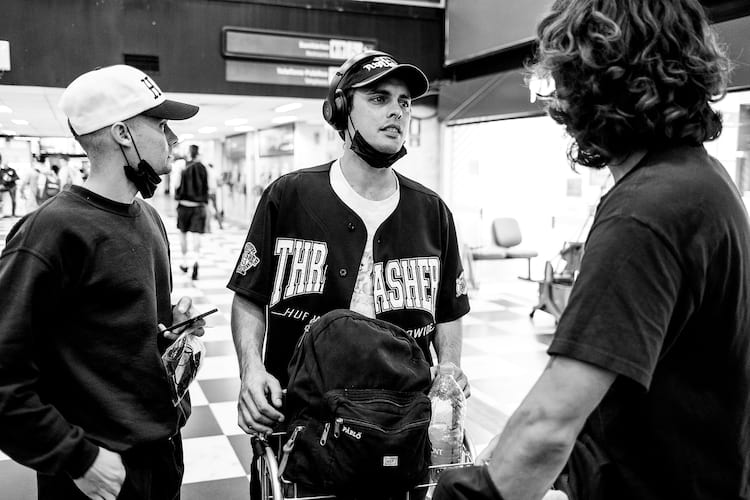 STRANGE AIRLINE POLICIES
When booking the flight from São Paulo to Salvador, my credit card was declined because of fraud suspicion. I called the airline after getting a reservation code on the site but no confirmation email. They told me that I could only pay in person the day of the flight—standard policy after a card has been declined, apparently. I wanted to get to the airport early in case there were any issues booking our tickets. We arrived three hours before our flight and were told that our confirmation code had expired and that we had only five minutes to rebook—but that their system was down. We eventually got everything sorted and ran to the gate to catch the last flight of the evening, somehow making it. Later that night we realized we were at the wrong airline to begin with. Still, we pulled it. 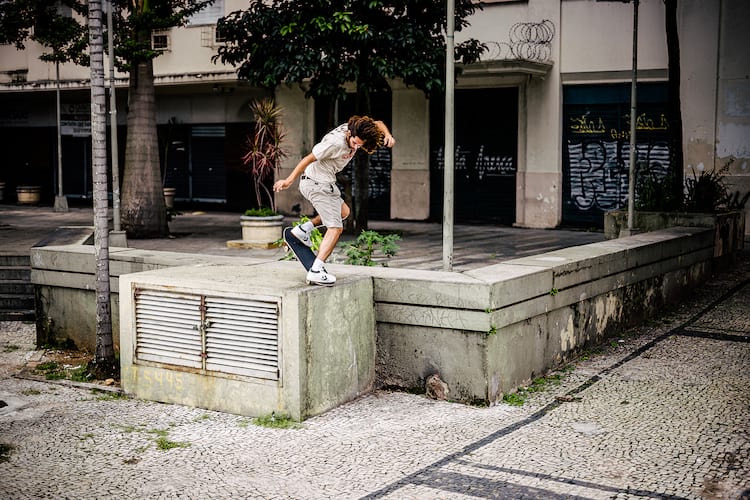 “My fit matches the spot, huh?!” —Erik Herrera. Back noseblunt

Dick Rizzo from rail to tail, 50-50 front shove—Dyrdek, come get your board 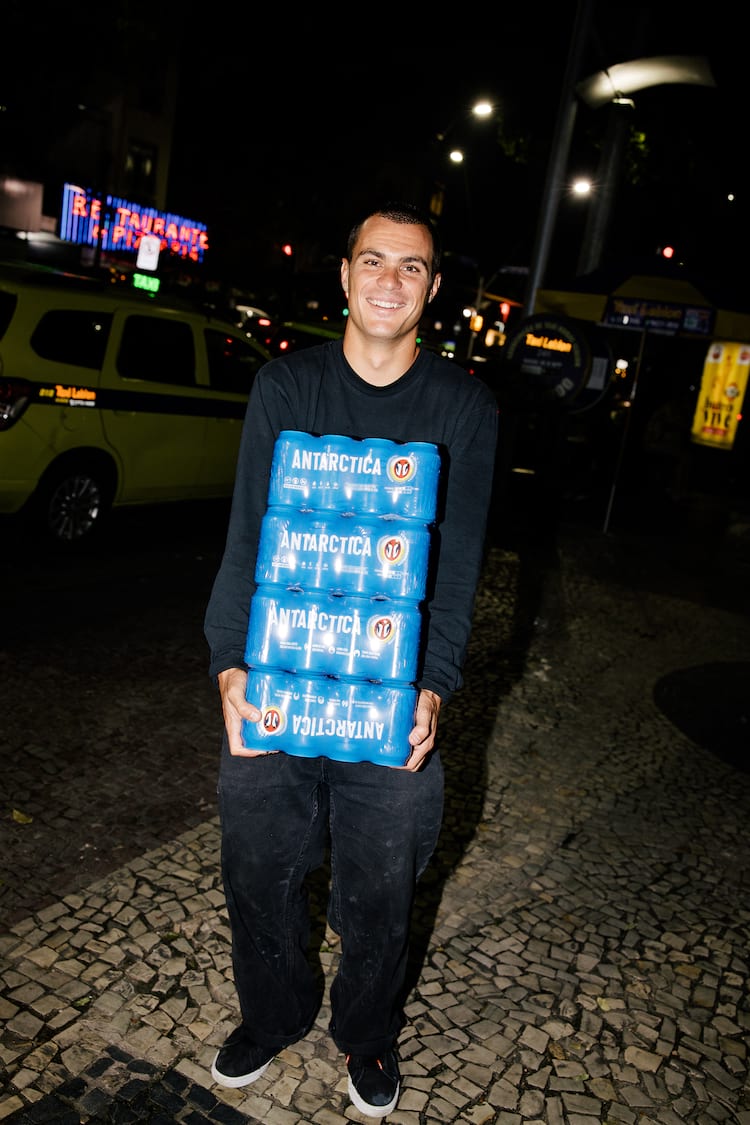 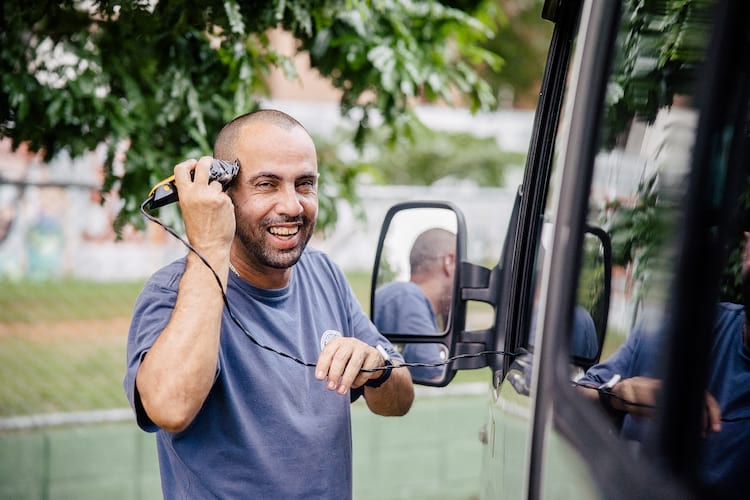 FAVORITE FELIPES
Our driver and two tour guides were all named Felipe. I don’t think I saw any of them drink water the entire time. Felipe the filmer took an 18-hour bus ride after partying for three days to be with us. Felipe in Salvador skated in 100-degree weather in leather pants and mesh tops. If he made it to dinner he usually passed out on the table waiting for his meal. Felipe the driver shaved his head at our São Paulo demo while guarding all of our gear. He also had a TV in his van with a flash drive full of old skate videos. Thank you, Felipes! 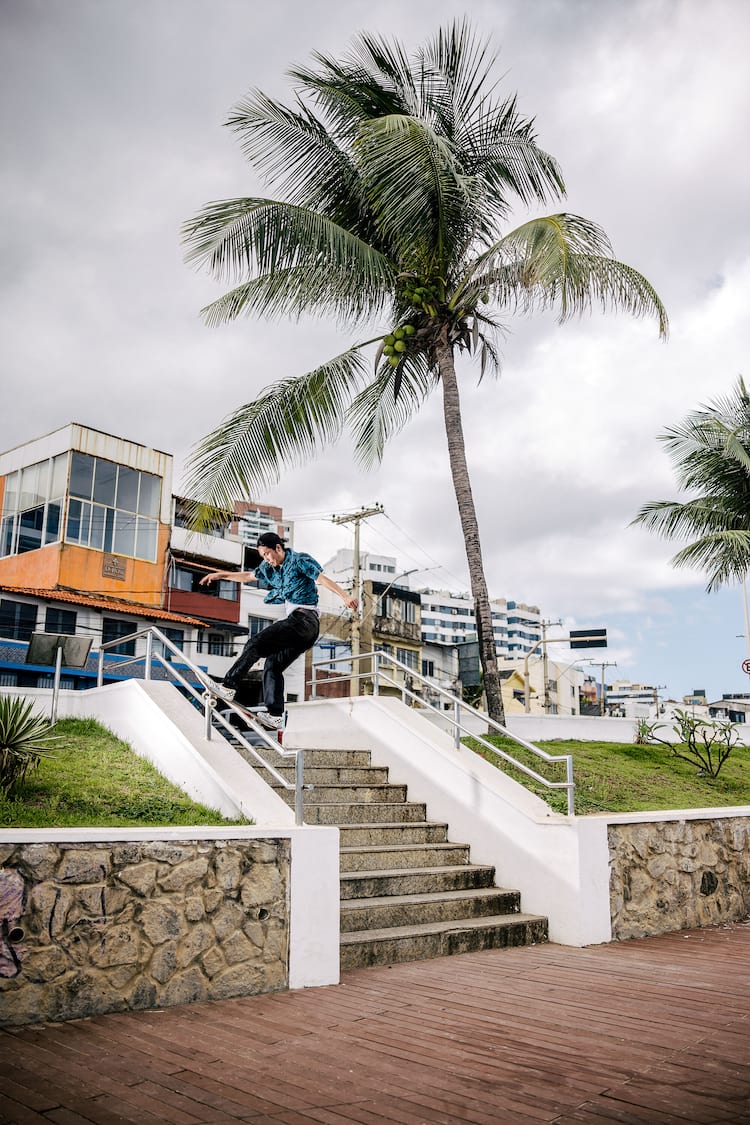 Daiki Hoshino front board through the kink 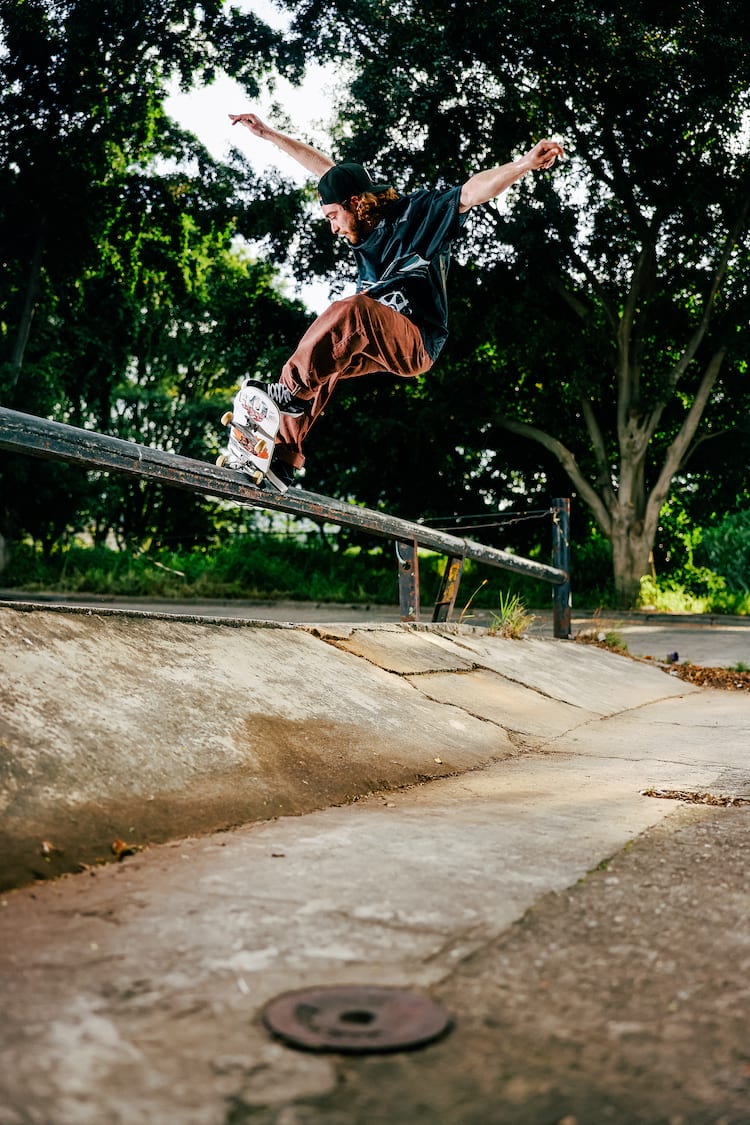 Pneus is tires in Portuguese. The team stuck around long enough laughing at the tire shop sign for Rizzo to figure out this switch front nosegrind 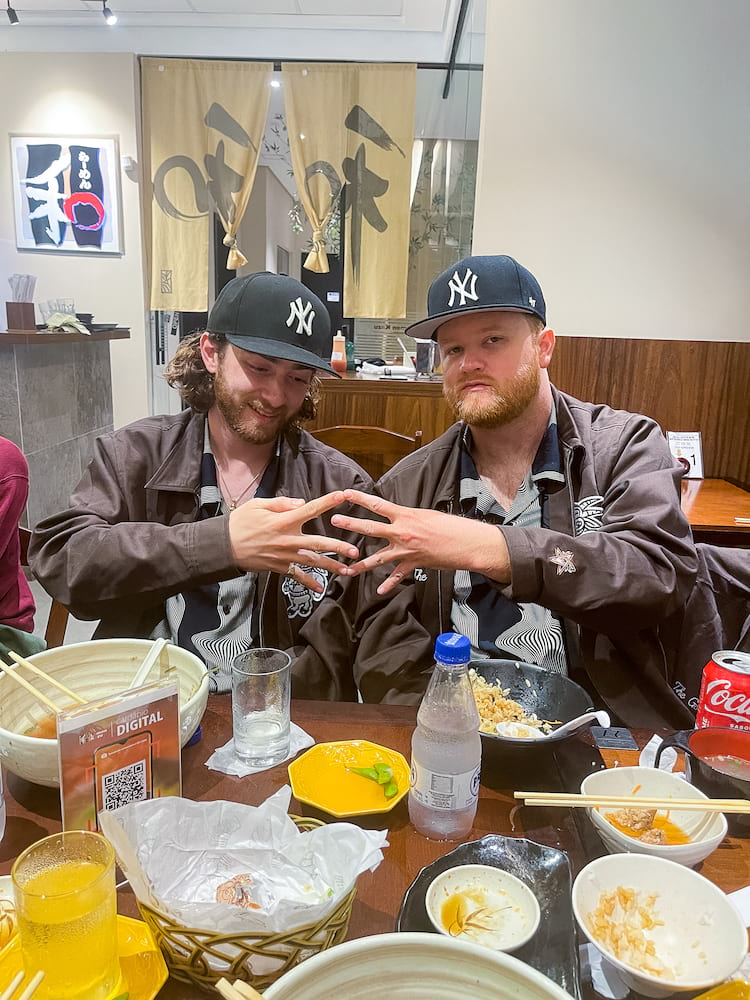 TUMMY BUSSIN’
Our photographer Big Mike came on the trip feeling fresh. His recently-discovered Keto diet helped him drop 20 lbs. By day two he was eating pancakes for breakfast, McDonald’s for lunch and a ten-course Brazilian BBQ dinner. I think we told the restaurant it was his birthday three times on this trip. Birthday or not, Mike’s usual nightcap was three Aperol Spritzes, five beers, a Coca Cola and a triple scoop of ice cream. Somehow Big Mike came down with a nasty stomach bug. Wonder what happened? 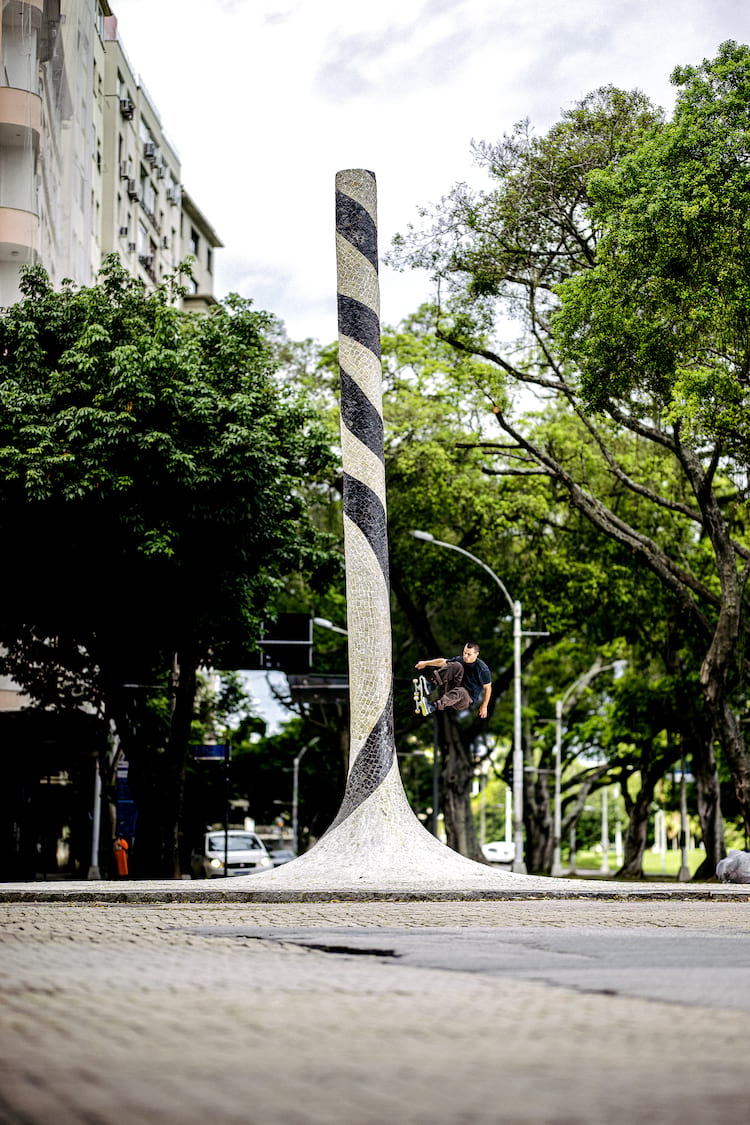 Mason said this was the scariest thing he landed in Brazil. FSO on the skinny smokestack 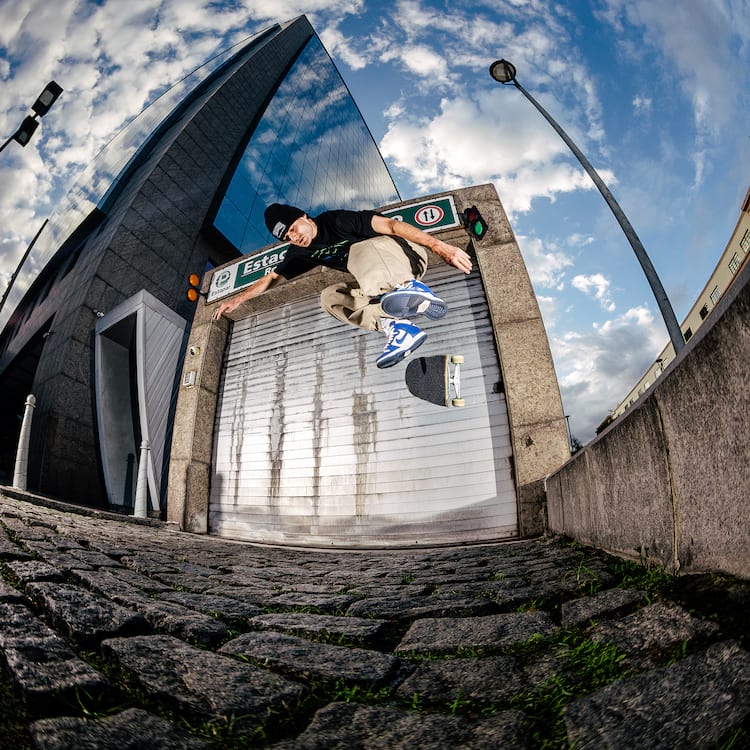 Nick Matthews, backside flip up. Fun fact: this is Big Mike’s fave photo from the trip 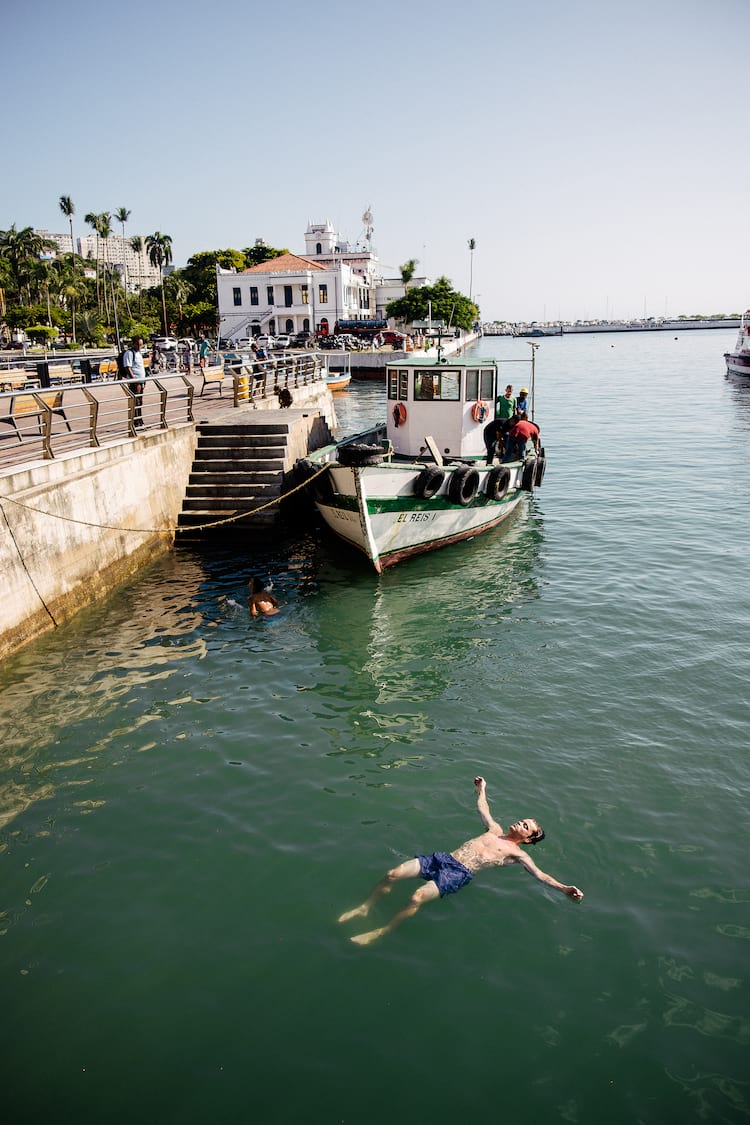 Loop it back all day, still won't make sense. Nick Matthews' demo-ending back Smith is nuts

PARANOIA
Everyone I talked to about Brazil said something like, Hopefully you guys don’t get robbed, or Brazil is sketchy! We were instructed to hire security in Salvador because of how dangerous it was. The locals wouldn’t even let us walk to dinner. Probably ten times a person on the street came up and warned us about the local danger of shooting photos. Maybe we were lucky. Day 12 and mentally exhausted from the trip, our filmer Tyler Smolinski accidentally left one of his camera bags behind at a spot. Half of us skated down there, searching in a panic. A local vendor pointed to a warehouse space where he had hidden the bag for us after watching us skate away. See! There’s still plenty of good people out there. Especially in Brazil. 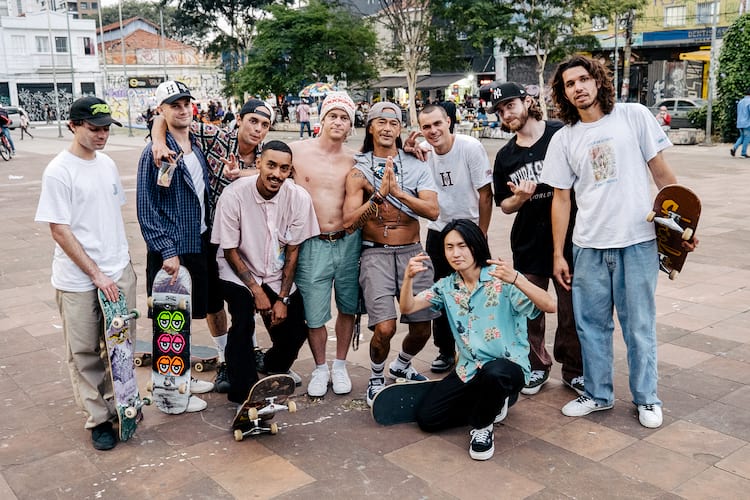