Indy's "Pedal to the Metal in the Mile High City" Article 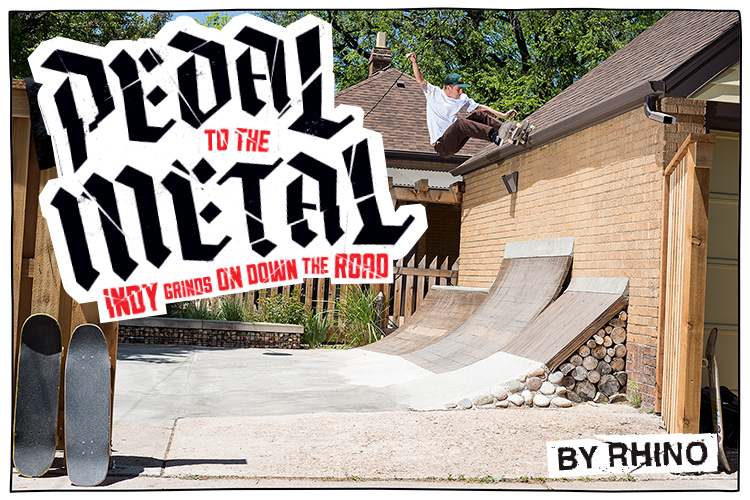 Mountain, Hewitt, Kimbel, Raybourn, Haslam, Trujillo, Kowalski and Chapman rev it up and clock in some miles around Denver Colorado for nine days.  With an endless supply of concrete skateparks and backyard bowls, you can’t go wrong wth a heavy crew like this! Sit back crack a cold one and enjoy the ride. You're definitely going to want to go skate after this one! 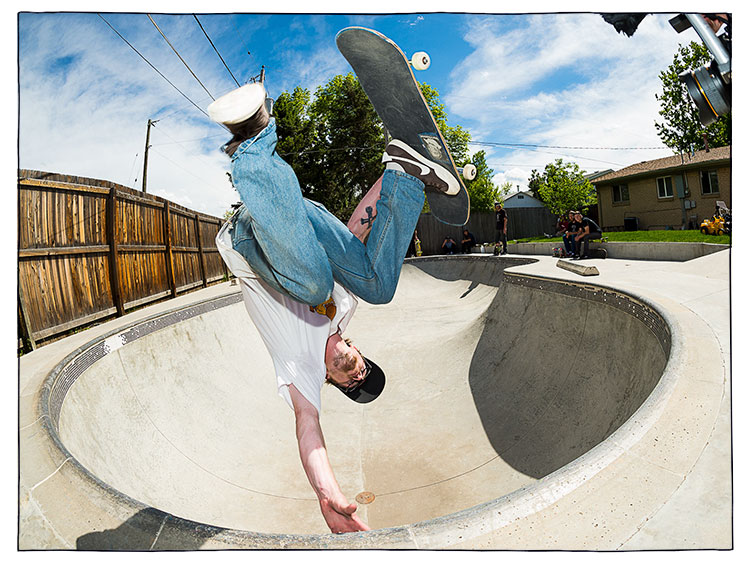 Fast plant andrecht?  Raybourn has got them! 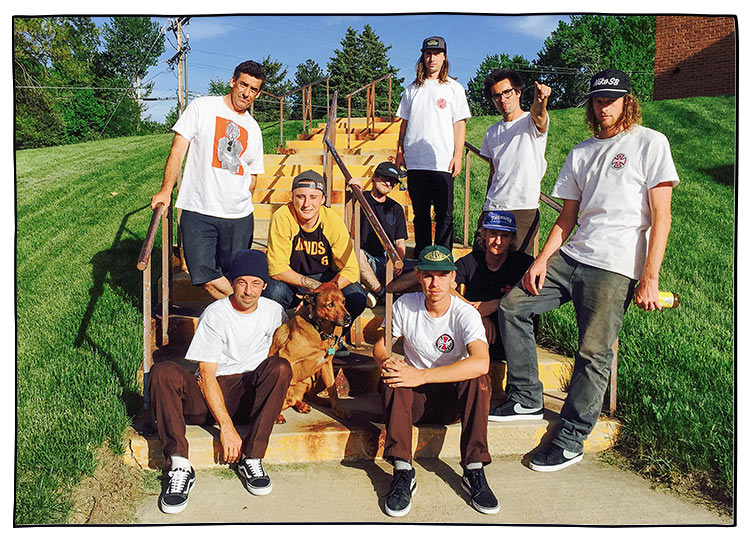 The crew for the Mile High City was geared up for the concrete mecca: skateparks and backyard bowls. Posted up in a shitty hotel for nine days on the outskirts of town, our rooms were just a place to throw our bags and crash. All day long we chipped away at the spots until the lights went out. We crossed off 12 skateparks and 12 backyard structures and didn’t even come close to getting it all. Someone needs to make a device that measures how far you’ve grinded. Our crew definitely crushed miles and miles of coping! 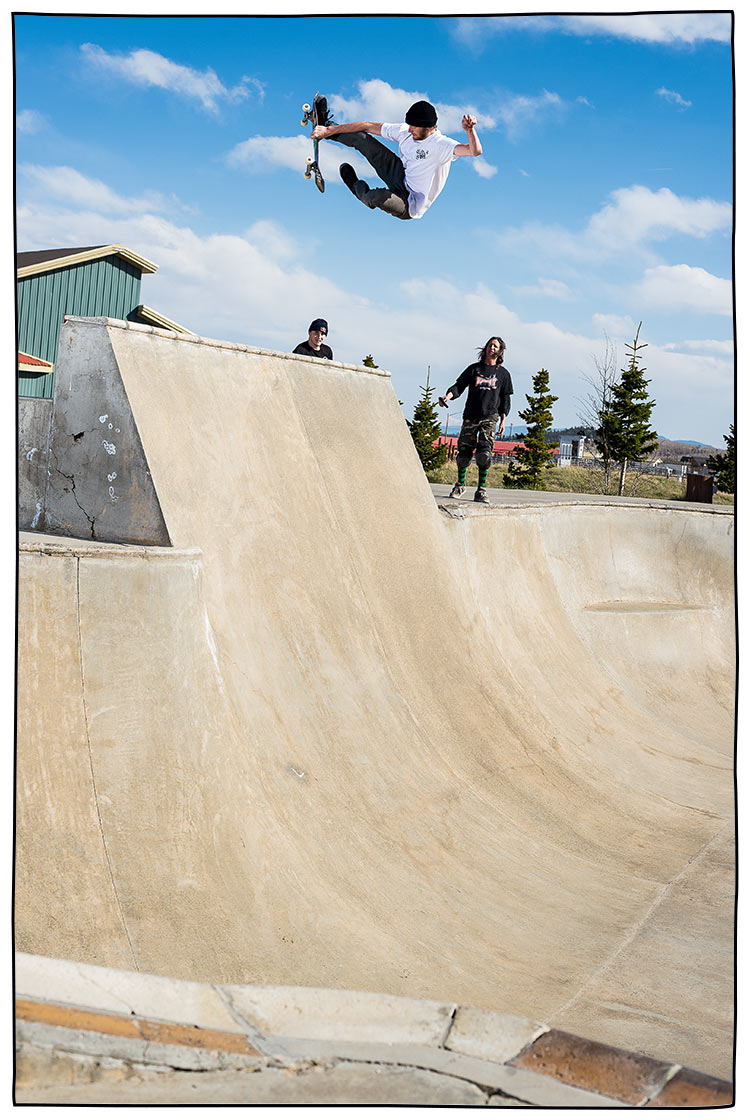 Jimmy “The “Mouth of the South” Leaphart took us to a few skateparks up in the mountains. He never stops talking, hence the nickname. Willis Kimbel left him speechless with this boneless in Fairplay, CO 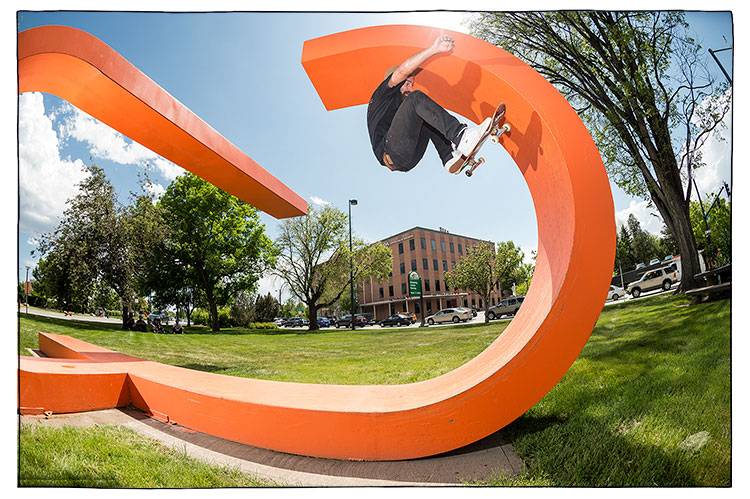 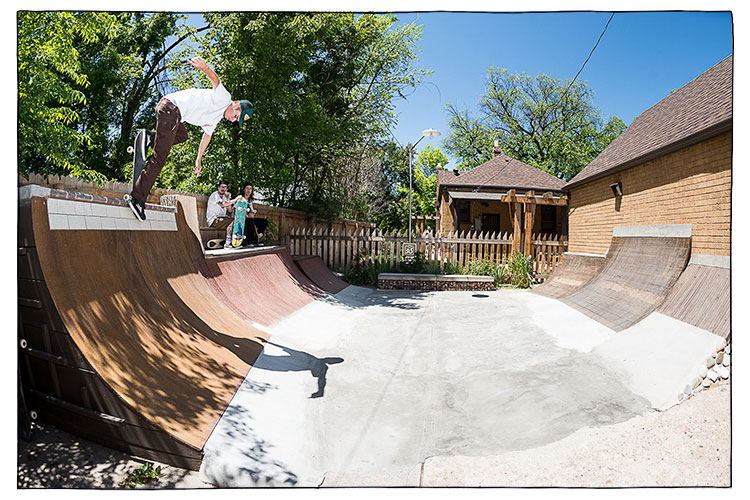 We got to session some newly poured backyard bliss in Denver. Cody Chapman back noseblunts a backyard dream scenario 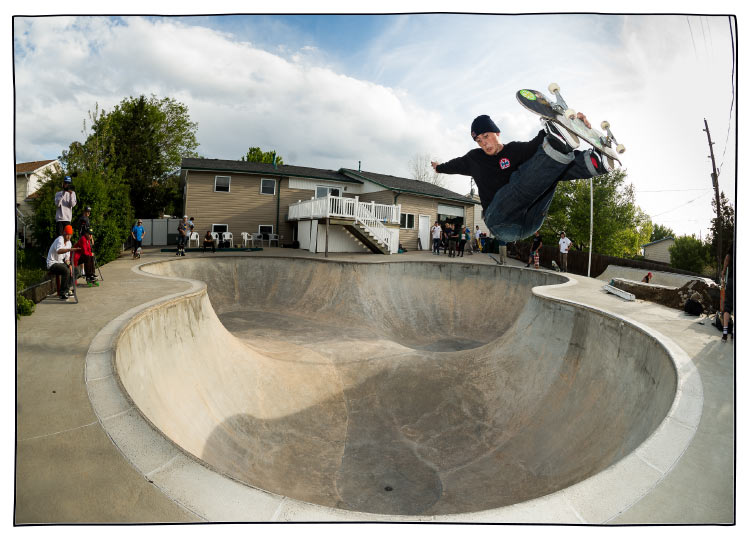 Mike P’s bowl was built after the Denver Vans’ park closed its doors awhile back. Chris Russell opens it up with a hefty frontside air in the deep 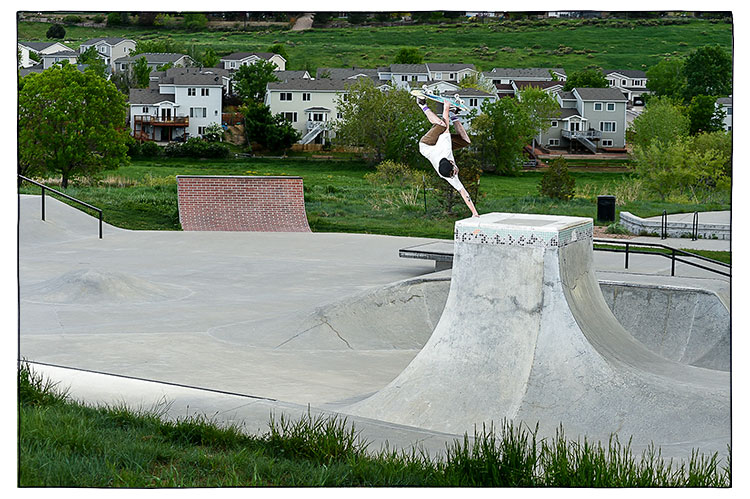 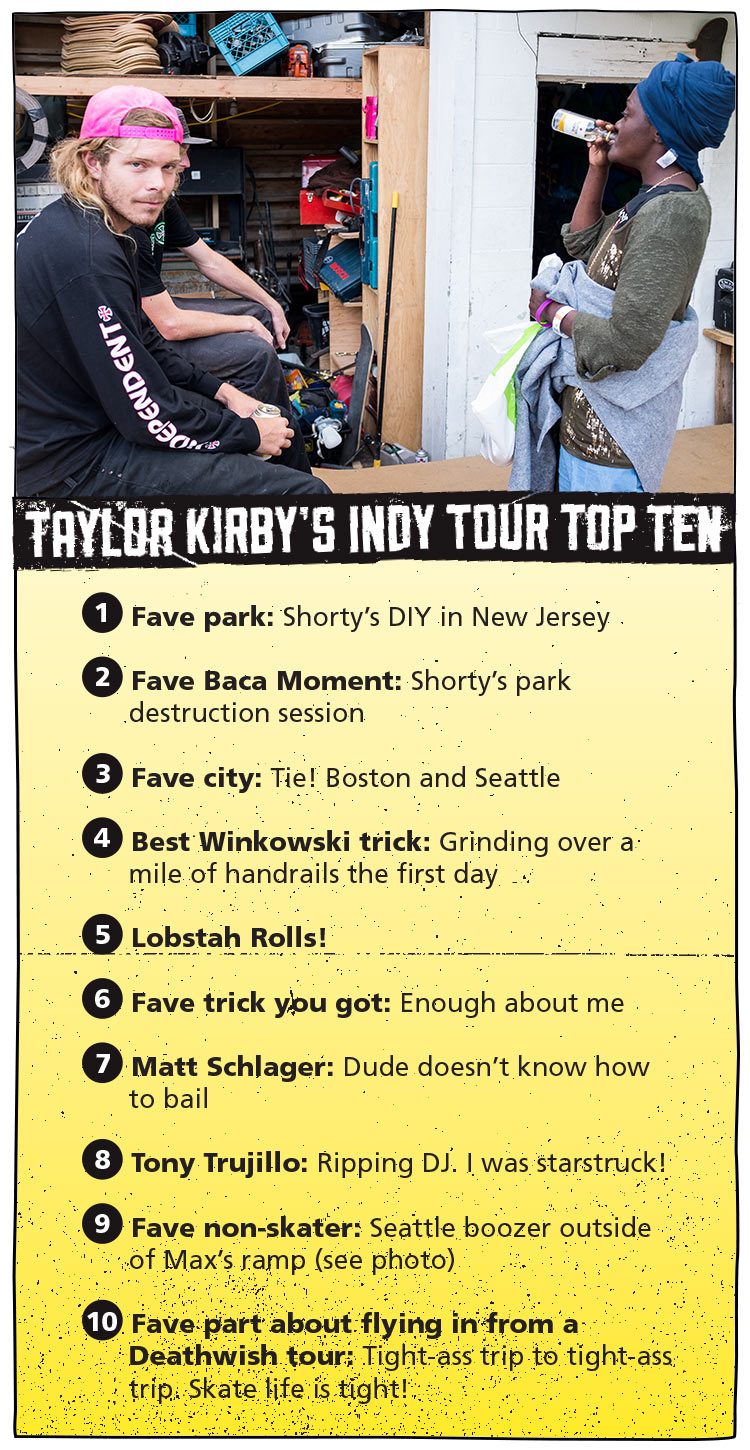 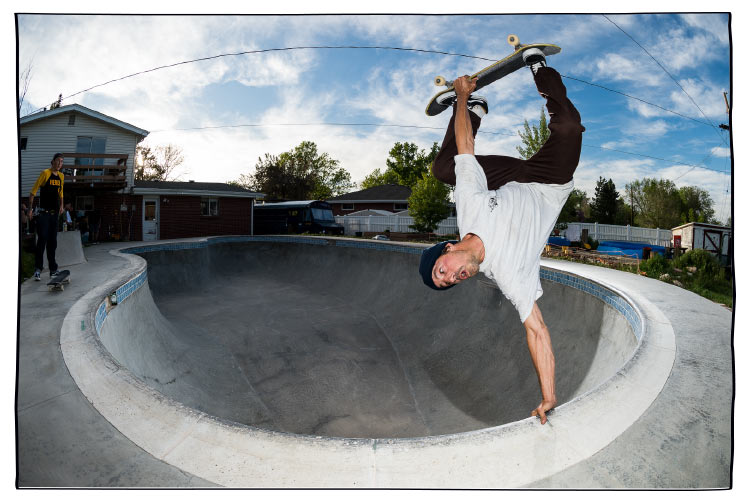 One of the best backyard pools in Colorado, Terrill’s replica of the old Murrieta Hot Springs pool in Murrieta, CA. Peter Hewitt drops the invert to fakie 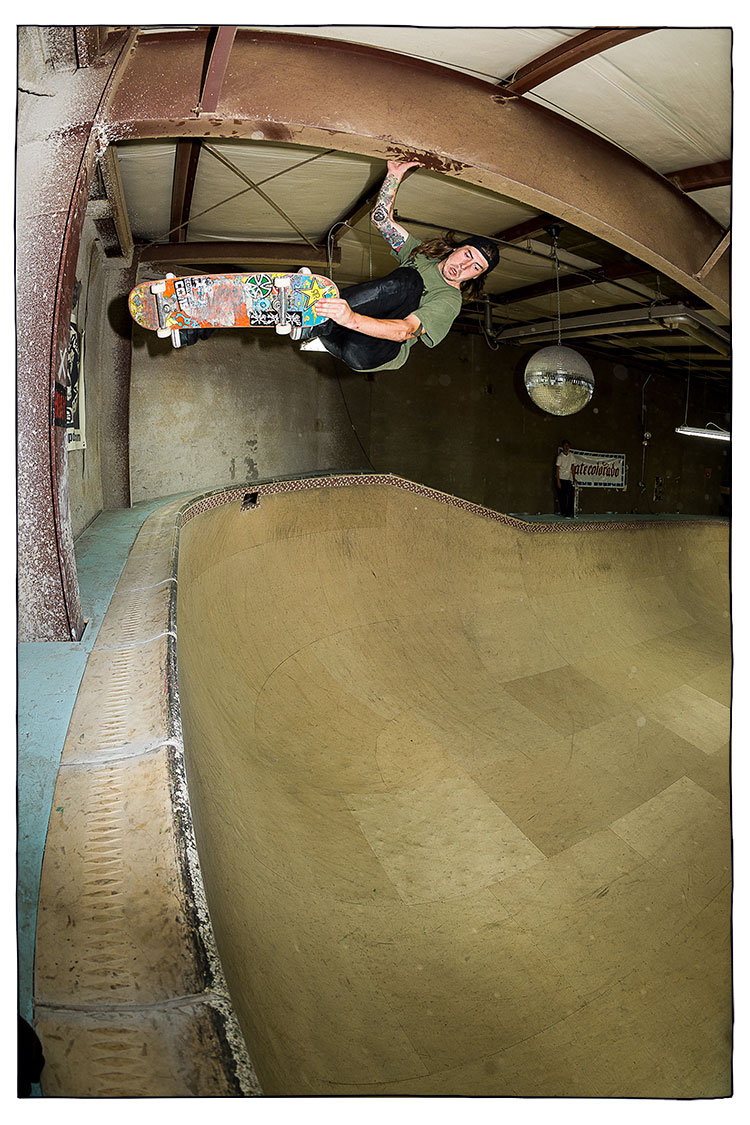 Kevin Kowalski hanging one out to dry 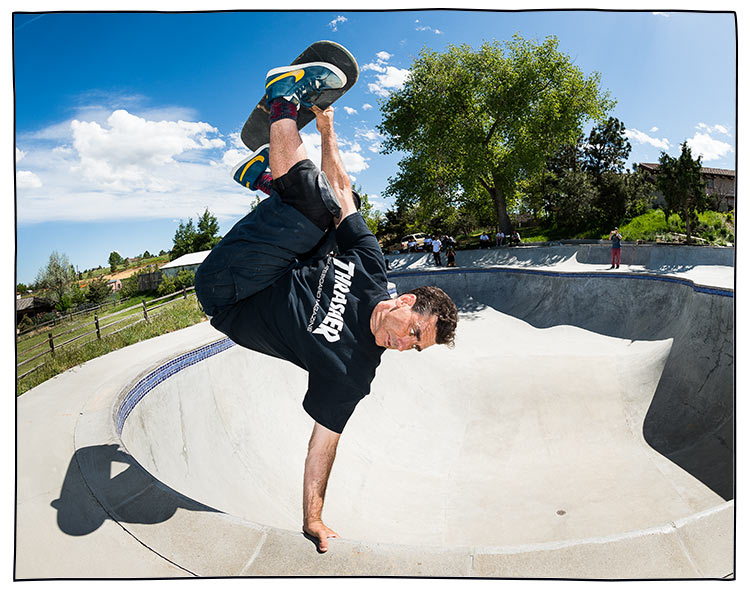 Denver has a ton of backyard made-to-skate concrete bowls and we tried to hit them all. Lance Mountain, frontal invert at the Totem Bowl with borrowed pads

What year did you get on the Indy team? Do you remember your first Indy trip?
Although I got Indys as a park team guy in ’79-’80 at Skate City and Whittier skatepark, when I got on Variflex the boards came with trucks so I rode those until 1983. Then I got on Indy. Most of the trips back then where a mix: Indy, Thrasher and Powell Peralta guys. I think the 30th year anniversary Indy trip in 2008 was the first official Indy trip I went on.

You were on the Denver part of the trip. What do you like about the Denver skate scene?
Denver has some builders that do some great transition parks and a good backyard-pool scene. There’s lots of backyard owners that just love riding and the skateboard culture and love sharing their memories and experiences with the new kids. It’s a pretty rad scene.

What were some of the highlights from the trip?
I like watching all the dudes rip at all the spots. I really enjoyed watching them skate at Jack’s house in Denver. He’s got an incredibly, meticulously built and incredibly hard to ride backyard wooden/metal structure. 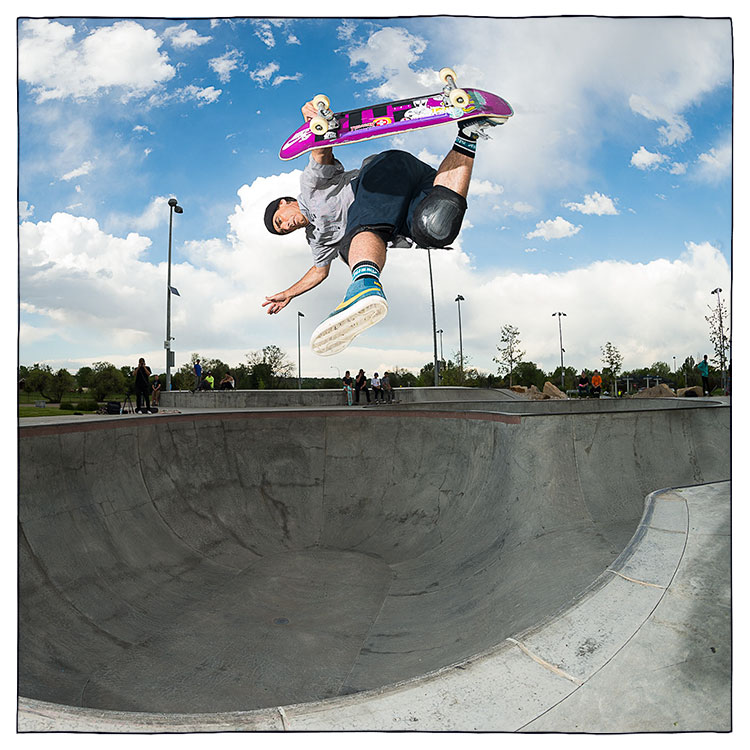 You said you were only good for a week. What’s it like going on the road these days?
I’m usually the most productive for about a week. It’s a total blessing that we still get to go on trips, meet people, skate new stuff and see others just rip. It’s something we dreamed about doing from age ten and I still get to do it at 53. It’s just unbelievable.

Whats the gnarliest trip you have ever been on?
I went on a trip for three months in ’88-’89 and that was good. Nowadays the kids travel that way all the time. The gnarliest trips are the ones when you’re not skating. I went on a 30-day tour and I tore my MCL at the first spot. It was cool but I could barely walk for the rest of the trip. The lamest part was explaining to people why I wasn’t skating.

What’s an ideal skate trip for you these days?
I will go on the road with anyone, but preferably the dudes that like to skate parks, pools and pipes.

Do you remember what you forgot to pack on the trip?
Energy or pajamas? Oh yeah, I forgot to pack my knee pads. I ended up borrowing a pair from Tim Mott for the week.

How did you deal with the mile high smoke coming from the back of the van while driving around?
I usually sit wherever but they gave me shotgun on this trip. A little window sometimes helps and I usually just fall asleep with shirt over my face. 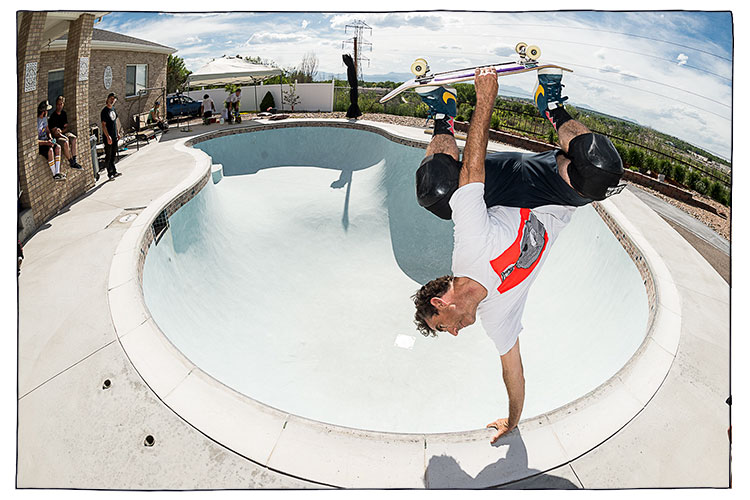 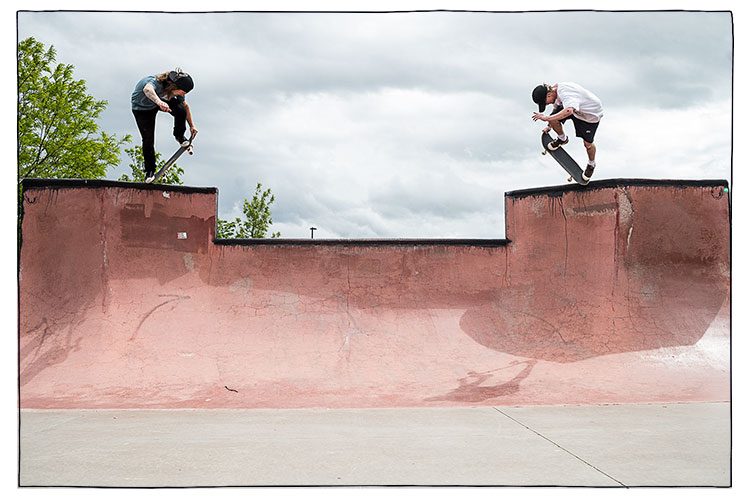 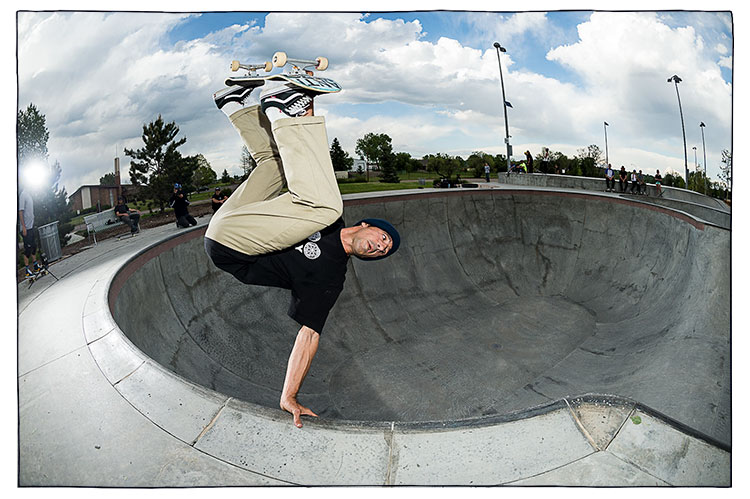 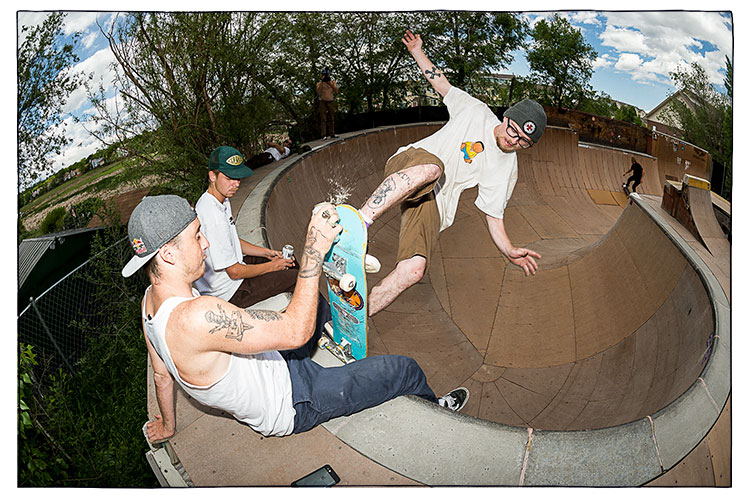