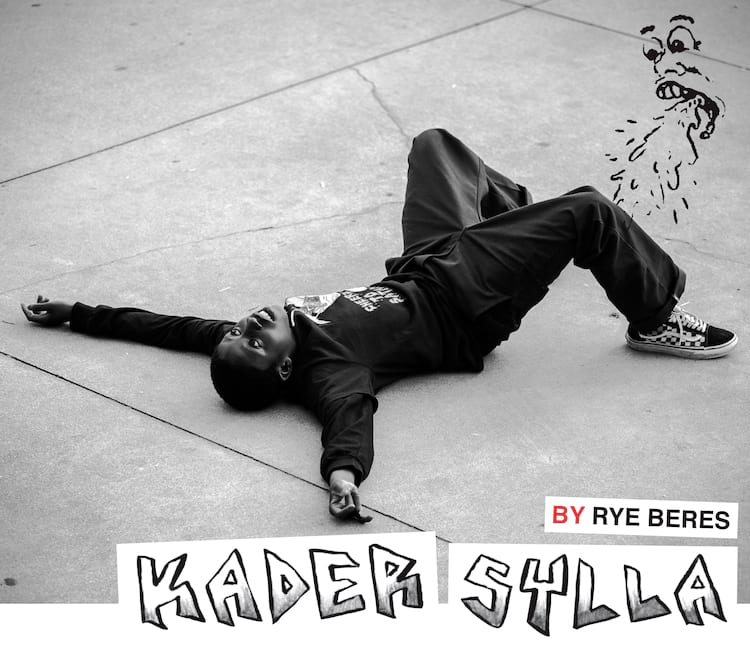 What happened, you just got food poisoning?

Yeah, from eating hot wings and Menchie’s. The doctor said I either got food poisoning or a stomach flu. They gave me medicine and said if it doesn’t work I have to go back in.

Me and Roman thought you got salmonella poisoning.

That shit was so trash. I couldn’t stop throwing up.

Anyways, how was SF?

It was fun. We just went for the video premiere. I didn’t even go to the after party. Fuck that.

How was filming for Candyland?

It was long, like, eight months of going to SF back and forth every three weeks and New York, too. Dude, I’m smoking my first joint in two days. This shit about to get me high.

When did you start skating?

You started skating in 2009? That’s insane. Was Pedlow the first place you ever skated?

That was the first skatepark I went to.

When you first started skating, where did you skate?

I had this backyard with a patio. There was a curb-high ledge that was wooden so I put wax on it so it’d be super slidey and I’d skate that a bunch with my brother.

Oh, you have a brother? Was he a skater before you?

I think we both started around the same time. My mom’s coworker gave him a board. I was so mad ’cause I was like, Why is this not going to me? We started switching off on that and then I got my own board. 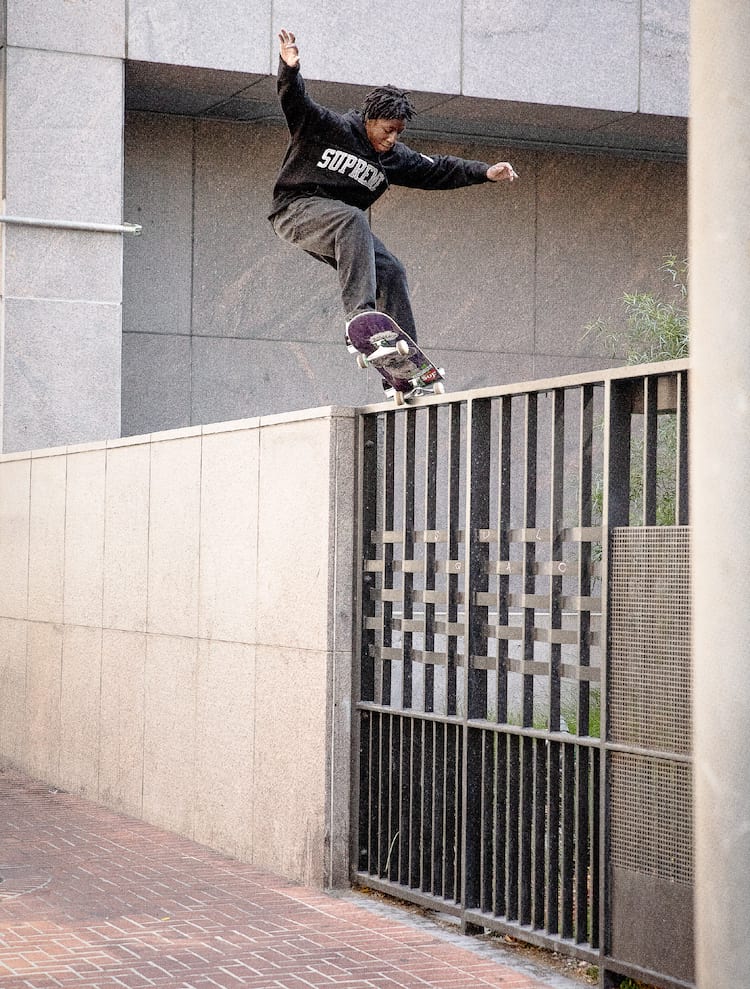 What was your first board?

I had three boards I remember but can’t remember which was first. I remember going to CVS and getting a SpongeBob board and then I remember getting a Plan B and then a Girl board from Zumiez.

So when did you first go to Pedlow?

Probably a year after I started skating.

Is that where you met Andrew Reynolds?

Other than your brother, who were you skating with back then?

Skating was pretty popular at my school but not super popular. I just skated with whoever I could skate with. Me and my friend Evan skated a bunch.

Were you tripping out the first time you met Reynolds?

My friend Jimmy used to take me to Biebel’s because he knew Guy Mariano a little. One day I went and there were a bunch of pros there and after skating Andrew called me to the side and asked if I wanted to get boards. I was tripping. That was on a Wednesday and then on Friday the box was on my doorstep.

So does that make Baker your first sponsor?

Well who else were you sponsored by then?

This weak-ass company called Inside The Drop. They kicked me off for putting a shirt on the ground. But I was hyped to get kicked off ’cause I knew the company was wack.

Did you end up finishing school?

Not on trips but at home I’m doing it.

Are you gonna graduate this coming year?

You don’t have your license yet? C’mon.

I was supposed to get it like a year ago. I failed my permit test twice. I’m scared to go back ’cause you can only fail it three times before you gotta go back and do it all over again.

How the hell do you keep failing?

I thought it was gonna be so easy. I mean, it is but they just trick you. I’ll press the answer and know that it was totally not the right answer.

This is just the pre-test, not the actual driving?

Can you parallel park yet?

I’ll be able to figure it out when we’re in the moment. 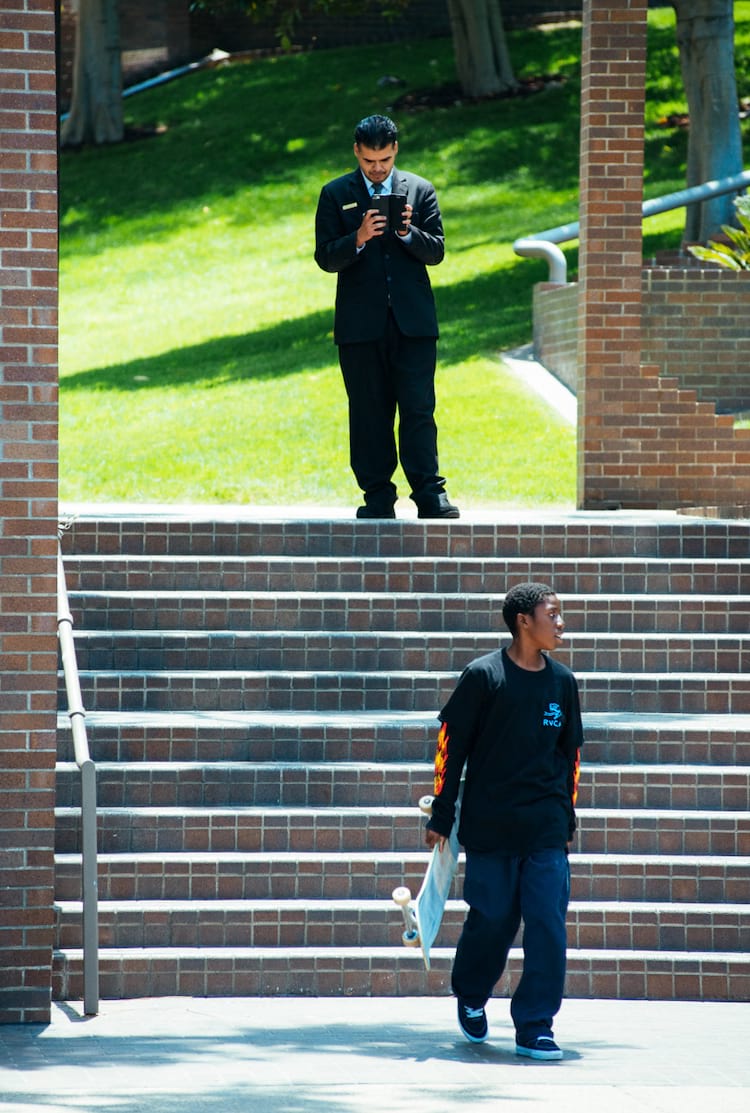 If I had my license now it probably wouldn’t be the best idea since I smoke weed. I’d drive high, definitely, but I don’t wanna drive high. But when I’m 18 who knows how I’ll feel about weed then? I might feel completely different and just quit smoking and be a good-ass driver. I have a good tolerance now, though. I haven’t smoked in two days, though.

What if skating never worked out for you, what do you think you’d be doing?

I’m interested in a lot of things but I probably wouldn’t be doing anything. I’d be so lazy. Skating has definitely brought me so much.

You’d probably be at home all day playing video games.

Dude, I think about that so much, like what if I had never met Andrew that day. About two weeks ago the most insane shit happened that really shook me into place. I was trying to ollie this bump to bar because Seven Strong did it really easy and I was like, Fuck it, I’m doing this. I was about to ollie it and then one of my legs went though one of the bars and I pulled it out real quick, but if I hadn’t pulled it out my leg would’ve snapped or something. Oh my God—it makes me so scared. 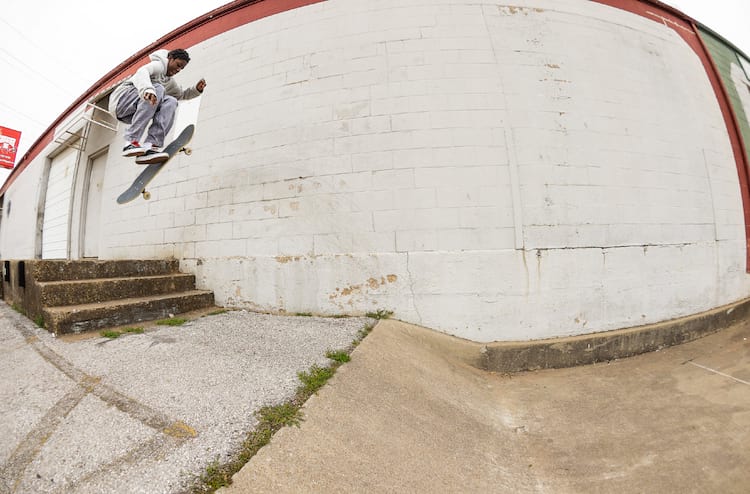 Have you had a crazy injury yet?

Yeah, when I smacked my head a few years ago. I was at Lanark skatepark and I tried to frontside ollie on this quarterpipe but kicked out and landed back on my board and spun out. My friends were trying to pick me up and pour water on my face but that’s, like, not good at all. So they called an ambulance and I was knocked out for eight hours. I remember waking up the next morning. I still have the scar on my head and getting haircuts after was so scary.

Speaking of haircuts, what’s up with your new ’do?

I had never had long hair and you only live once and I wanted long hair. So I grew it out and then twisted it.

You did that right when we went to Hawaii, right?

Damn, I miss Hawaii. Remember when we went mountain biking? Had you done that before?

I had never done jumps before but I’ve ridden a mountain bike.

Can we talk about what else happened in Hawaii?

No. What the fuck? This is not going in the interview.

Fuck it. I lost my virginity to a Hawaiian bitch. Catch me if you can.

It happened at the skatepark, right?

Should I just tell the whole story? So basically this girl picked me up from the Airbnb and we went to the skatepark and fucked. It was beast. We were just kicking it at the park and one shit led to another.

Wait, did this happen during the day or night?

Not in the middle of the day. What the fuck? You know how there’s the beach across from the park? We went there and hung out, then went back to her car.

You were so stoked the next day at the airport.

These days kids know what to expect. Kids who are 12 are having sex and know what that shit’s like now. 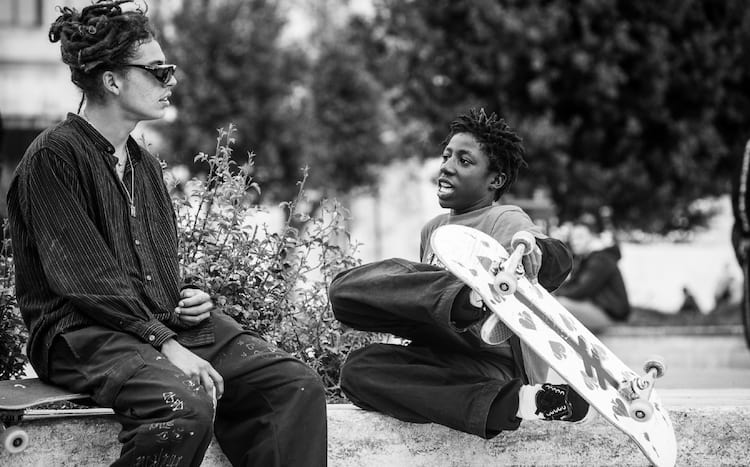 Was it everything you thought it’d be?

What’s up with you hanging with Miranda Cosgrove?

You know Mikey Alfred? So he’s making a movie and asked me to play a role in it. I showed up not knowing anything and I walked in and my childhood hero, Miranda Cosgrove, is there. I don’t know if it was supposed to be a date, but her and Ryder McLaughlin are standing next to each other and I was the movie attendant telling them what seats were available and shit.

Sounds like you were living your Drake & Josh fantasies.

Drake & Josh, iCarly, like, everything. That shit was insane.

She followed you, too, right?

Yes. Like, what? I don’t even know why but it’s amazing.

You think if you asked her out she’d be down?

What? No one said you had to fuck her. All I was asking is if you’d go on a date with her.

What the hell is going on with Baker 4?

It’s gonna be insane. I’ve seen a lot of people’s footage and it’s ridiculous. Rowan did the most insane trick I’ve ever seen in my life.

I heard you don’t have any footage at all. 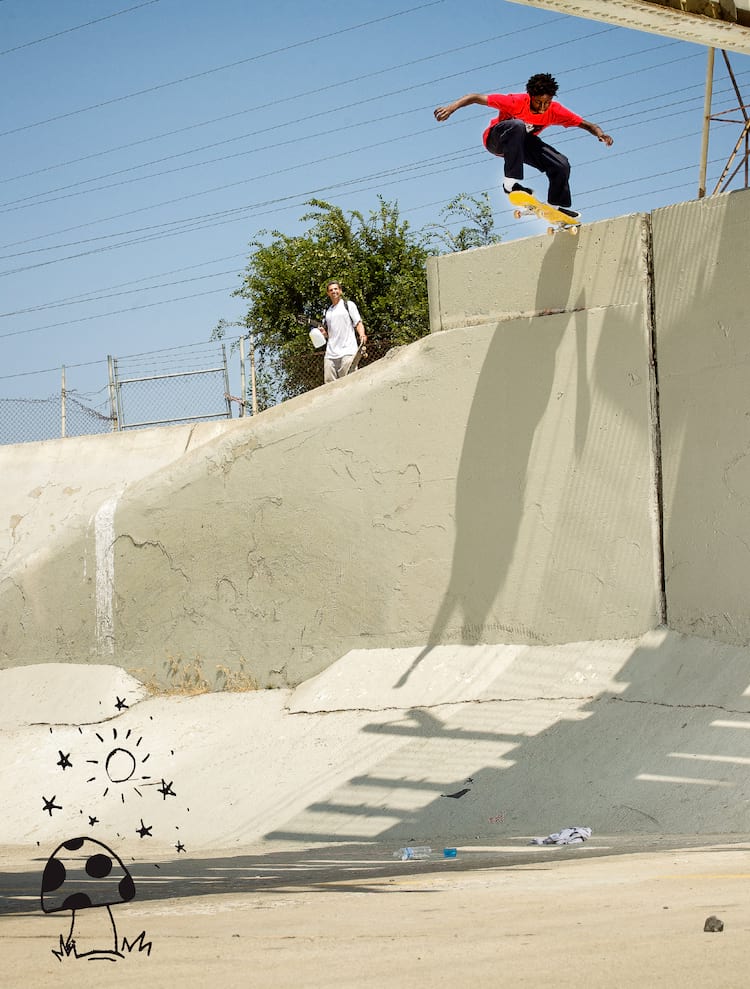 Imagine dropping in on 12 feet of vert? Almost as scary as Miranda Cosgrove     Photo: Karpinski

And I filmed two of them.

Really? Oh yeah, the impossible and the nollie backside flip.

Jokes aside, you have footage, though, right?

I have a lot of footage. I have two parts in the video—one is my kid part and the other is me now. All of my footage is trash, honestly.

Are you nervous for the premiere?

I’m not nervous. I’m just gonna show up, say what’s up to everyone, put my hood on, sit down watch the video and leave.

Hopefully there’s another riot this time.

That’d be tight. I’d join the riot. That’d actually be so sick.

Do you know how old you were when Baker 3 came out?

I wasn’t even a thing. Wait, when did it come out?

Oh yeah, I was three.

You probably couldn’t even talk yet.

I was probably just shitting.

Milton. I think he should get it and deserves getting it. If Jake were still here I’m 100 percent positive he’d give it to Milton.

What if we let you pick SOTY?

I’d say fuck it and give it to Tyshawn one more year. Dude, in SF I saw him film five tricks in one day. It was ridiculous.

And they were the most fucked-up tricks. I was trippin’.

Who do you think is the gnarliest skater right now?

Milton, Tyshawn and Rowan. The shit I’ve seen them do this year—like Milton’s kickflip. All three of them are just so fucked up.

According to SLAP you’re on Antihero now.

Really? Why? Dude, I’ve ridden so many Antihero boards.

What happened with the iron cross? Too tired over there and needed to stay awake?

I always rode Indys and never anything else. And when I changed my board to be smaller I figured might as well change my trucks. So I tried Venture, Aces and Thunders and Ventures were my favorite. I’m just woke as fuck now.

Well on that note, glad you’re feeling better. Can’t wait to see your part and thanks for doing this. It only took a week and a half. 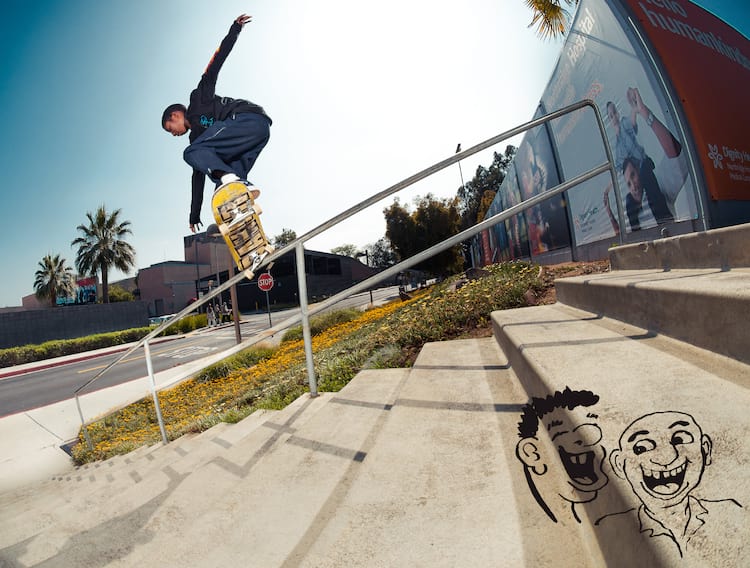 There’s a riot coming on. Crooked grind 15 and Kader’s setting it off     Photo: Papke