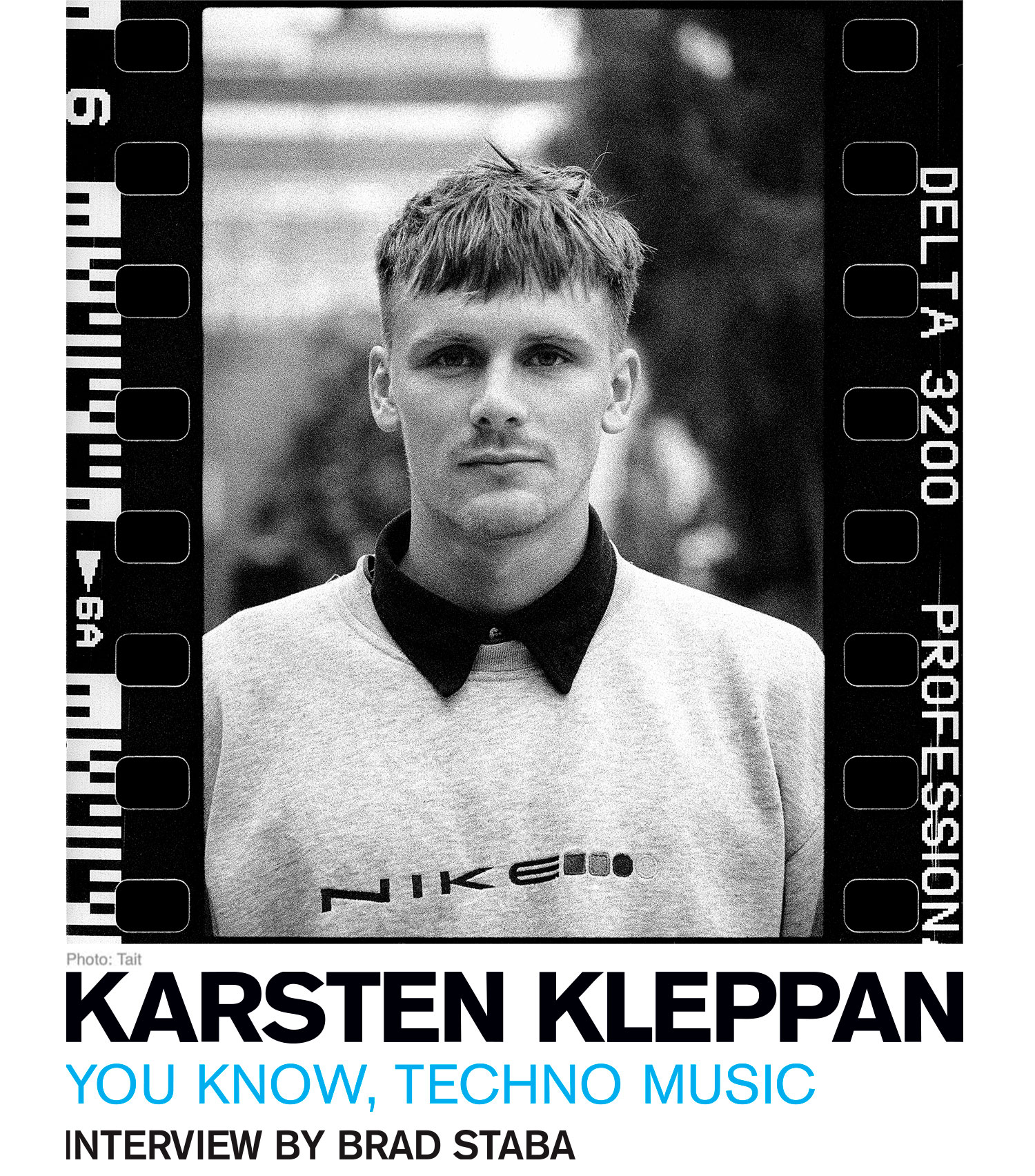 Where are you right now?
I’m in Berkeley at your house.

What’s it like staying with me?
It’s great. You have a beautiful back house. It’s fun. We go skate, eat pizza and shit.

Do you remember your first ever interaction with me?
Yeah, that was in Berlin, 2014. It was during the World Cup, the one that Germany won. We decided to go to Amsterdam that night because we were just over it. It was too much. We were supposed to skate in Berlin but it was going to rain for a week, so we made the power move to get in the van and drove eight hours to Amsterdam. It was kind of worth it. We skated that bump-to-rail spot that you got some clips at for the video. Yeah, that was the first time. We got drunk on that drive and had a lot of fun.

We did. I remember hitchhiking naked on the Autobahn.
At one point we were pulled over on the Autobahn—you were climbing on poles and trying to hitchhike naked. It was a good first impression. That was the day after I got on Skate Mental.
  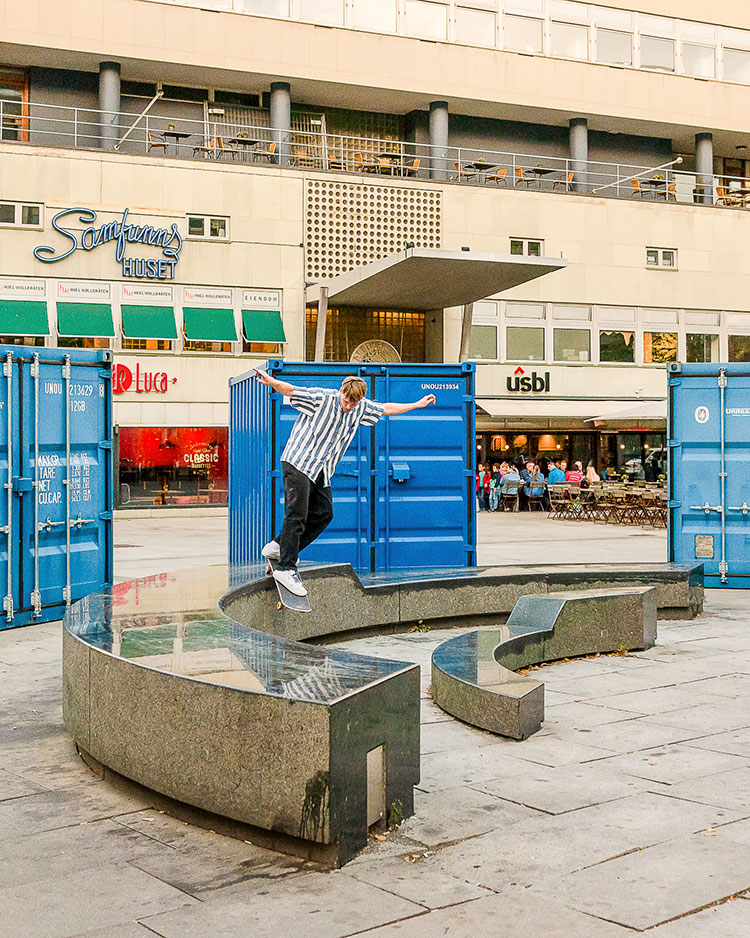 We were at Café Lux in Amsterdam and didn’t Kevin Bradley put you on the team?
Yeah, I think he came over to me and told me I should skate for Skate Mental. Then he waved you over and told you that you should put me on.

I was just, like, "Let’s get it. I’m down."
Obviously that call to Element happens, but that was cool that they did cool stuff for me, you know? You never forget the good things that people do for you. I got to travel and they helped me out a lot. Sometimes you’re ready to move on.

People forget that, though. Obviously it’s always hard, like a break up. Sometimes you just gotta pull your hog out and put it in some other shit.

Sometimes you move on to some new stuff.  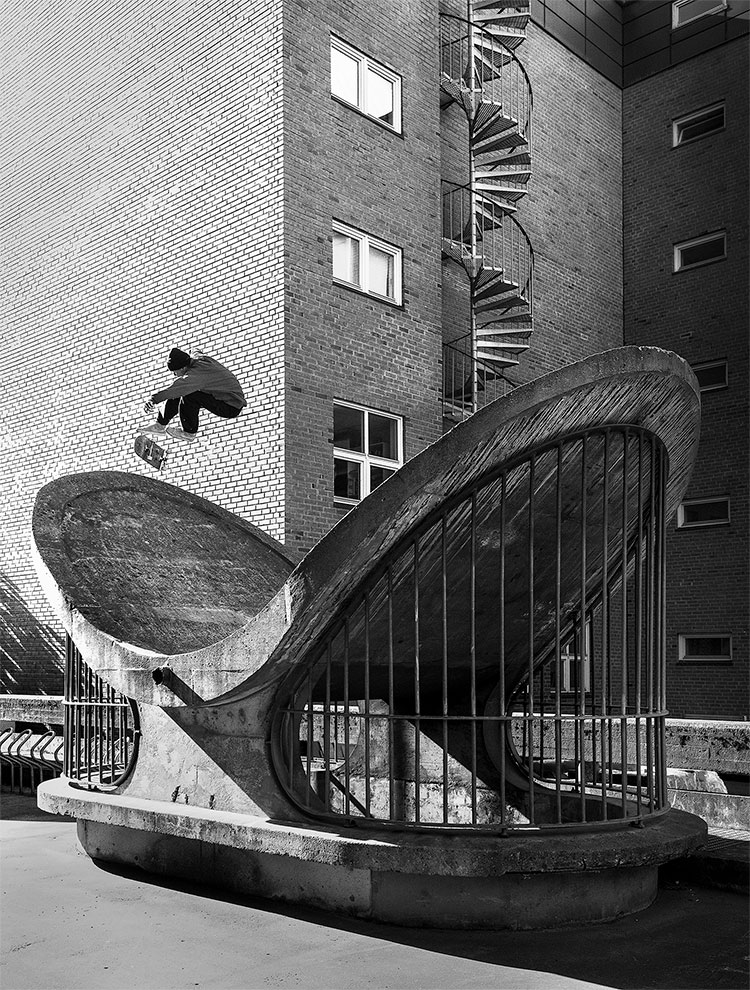 Tré flip to fakie at what we’re assuming is the Pringles factory    Photo: Gratå

I think it might be important to sum up what it’s like living in Oslo full time.
Oslo is great, like, two months out of the year. The rest of the year it’s kinda harsh. But it’s really cool. It’s such a good city and we have a super good skate scene there. Cool spots. It’s not the perfect place to live if you want to be a pro skateboarder, but you just have to be creative, look for spots and make the most out of it. We get two-to-three months of good weather, then it’s just the clubs every single night. You know, techno music. A good party scene, too.

You’re lucky you get to travel when it gets un-skateable.
That’s a must. I mean, I like the winter, too. When my homies have normal jobs and fall hits, things get dark. You get stuck in the winter. It’s at least half a year before it starts getting good again. I’m lucky I get to come here. It’s for sure hard when you don’t have the option to travel. 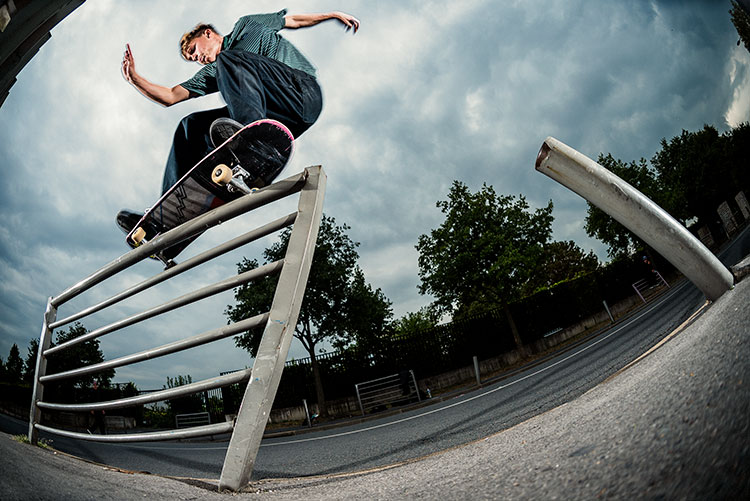 Are there any ugly people in Norway?
For sure, but there’s not many.

Do they all live in a certain village where all you beautiful people don’t have to look at them?
No, no. We got all kinds of people.

You travel a lot with Nike. Has there been a particular moment that sticks out in your head where you think, That was fucked up, or that was amazing?
We went to Shanghai. That was our last trip. There’s not one episode but it was cool being there with a whole crew. I’d never been to China.

Was Eric on that trip? Did Eric get any clips there?
I think he got a pretty good manual trick. He might not have. I’m trying to remember. We had a really good time, though.  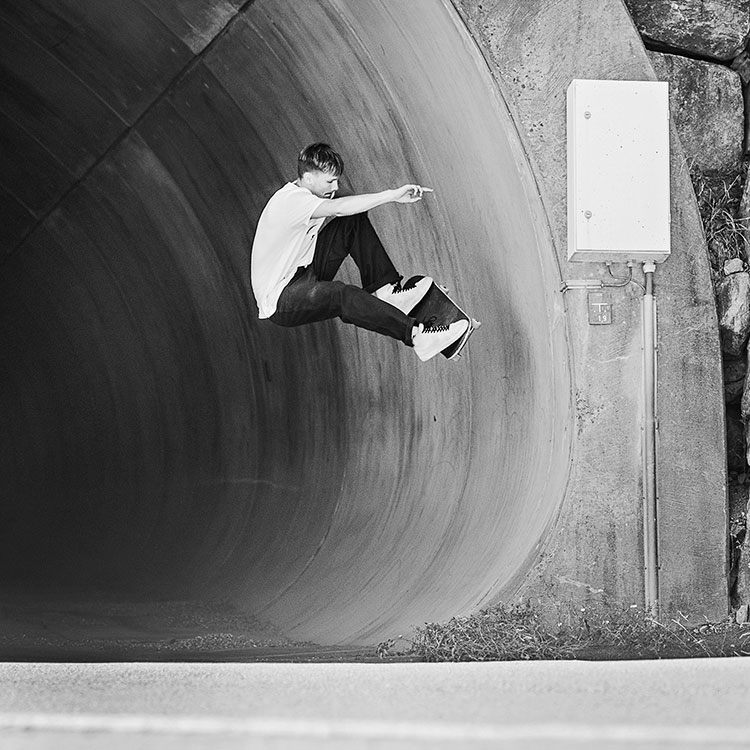 The people of Norway are beautiful and so are their frontside ollies    Photo: Gartå

Do you remember any trips with Eric when he got a trick?
Actually, yeah. I remember one trick. In his part he did a half Cab manual backside flip out. That was actually a pretty cool setting. It was near the beach in the city of Valparaíso, Chile. I remember that it was really scenic. We were all there drinking margaritas. He was mad, battling this manual for a couple hours. There was a line, too.

I just wanted to confirm that you saw Eric Koston get a clip.
That’s confirmed.

Back to you again.
There was one thing that was funny. We went into this huge M&M store in Shanghai.  I remember Cory and Grant just went crazy in there. They had these mascots and they were putting on all of the costumes and running around. The security didn’t know what to do with them. They just let them do whatever they wanted.

I can imagine Cory’s outfit right now in my head.
He was wearing some crazy green pants with straps over his shoulder and shit. There was actually a mascot in there—a guy in a suit. They were just fucking with him so much. Dancing and hugging him. If you would do that here, you would go straight to jail.

You would get kicked out. That’s funny, though.
We went bowling and the same shit happened. We were running up and down the bowling-alley lanes. At one point Cory slid through the pins on his stomach and ended up in the back. He came back somehow. It was insane. 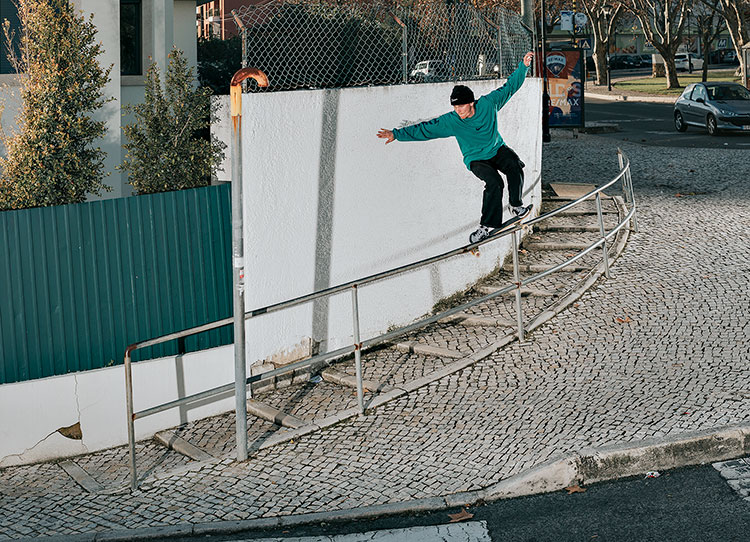 Rugged ground, ripping Smith—big dipper all the way through the bend    Photo: Matreno

That’s the best thing about Cory, the amount of fun he has.
That was probably one of the most memorable trips, Shanghai. Not skating- wise but just being there with that crew was so good.

What is this #PoolSkater shit?
That’s from when Scuba was renovating his pool and he drained it. I was staying at his house pretty much the whole time and we were pool skaters.
 

So he drained the pool and you were a pool skater? You threw a hashtag in front of that.
Yeah, I definitely felt like a pool skater. It’s fucking hard. The pool was gnarly, too. Lance Mountain was there almost every day skating. Anyone who came over and skated the pool for that period of time is part of the crew. I have a piece of the old pool and it says my name on it with the date.

I have a chunk of the Gonz channel over there on my bookcase. I remember the day when they were tearing it down, I just jumped in there and grabbed a chunk.
Good call. Power moves.

I personally think European skating is at its all-time awesomeness right now.
I would agree with you. 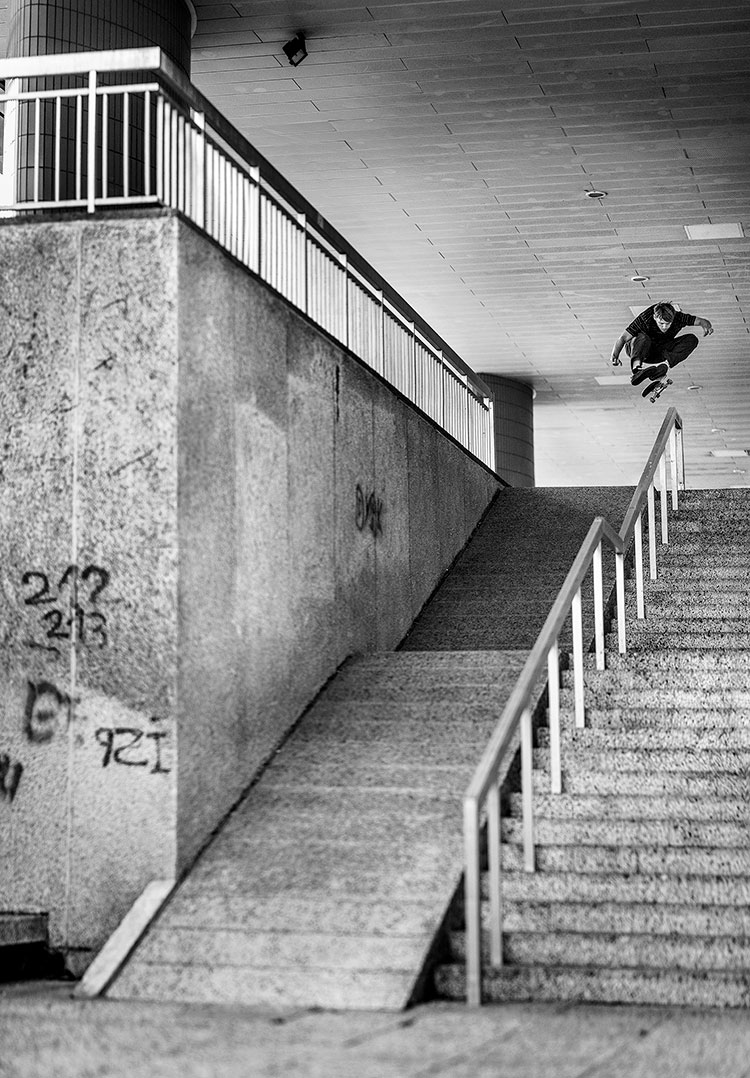 ’Til he gets to the next pool session, Karsten will settle for diving into this kickflip roller-coaster ride. Mental indeed!    Photo: Pires

For me, personally, getting to see all parts of skateboarding seems so pure. Do you see skateboarding growing in Norway?
I think it’s just growing in general. I’ve always been a fan. I grew up in Europe watching all the guys. It’s growing and becoming a bigger scene. It used to be London and Barcelona. Now you see, for example, Scandinavia has so many good skaters coming up. You can just tell it’s getting more and more popular. It’s sick. In different countries people skate a little differently; it’s a different culture. You can tell the Finnish guys are crazy and skate gnarly. Then you have the Spanish guys who are tech.

Every country has a Jamie Thomas. Everyone has a Muska.
I’m super stoked. The last couple years a lot has happened in Oslo, too. We started to get skateparks. It’s super dope.

Next thing you know, skateboarding is in the Olympics. Imagine that.
It is so crazy.

I’m sure there’s nine-million people you would like to thank, but is there anything or anyone you’re grateful for?
Obviously my mom and dad. They’ve always been supportive. My sister, you, Scuba, Colin, Luan, Nike. There’s so many. My friends. I want to thank everyone, you know? Everyone that has ever helped me.