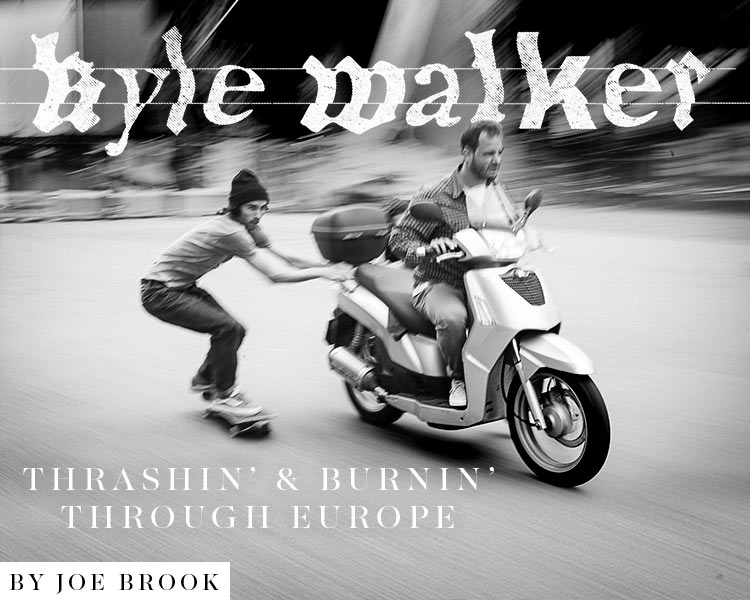 So how was Thrash N Burn, dude? Does it live up to its name?
I think it should be called The Rev’d Up Trip. Fully Rev’d. It was definitely a wild one, that’s for sure.

I feel like between the skating and the life antics there was never a dull moment.
Yeah, that’s for sure. I got in four days into the trip and when I got in, I think they had enough stories for three weeks. When y’all picked me up at the airport I came into the hecticness of a fireball.

What was one of your favorite moments on the trip?
Probably watching Louie just murk off every single spot we went to.

He’s like the silent killer, right?
Yeah, he’s always been a legend, then he cut the hair and just—boom!

How was it traveling with your fellow SOTYs? We had Grant and Ishod on there, the triple threat, how was that?
It was good. It was a lot of tranny, so I was posted up with some beers watching them get down. But it was a good time, man. Never a dull moment. 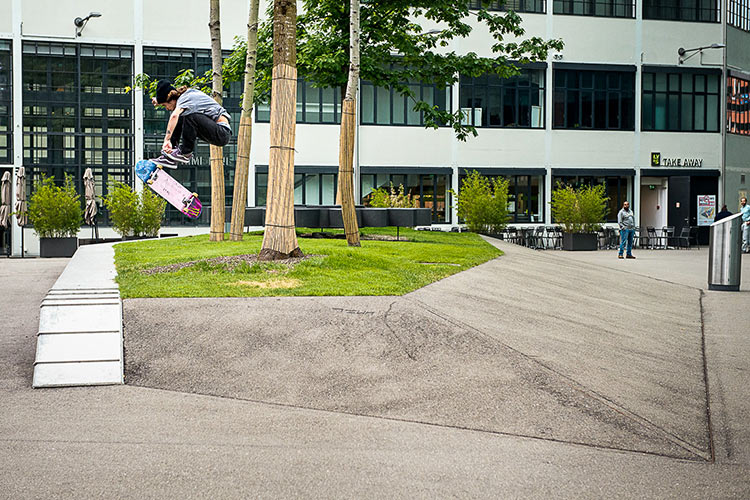 K-Walks put down the beer and scooped up this massive 360 flip. Fully rev'd

Is that the first time you’ve been on a trip with more than one SOTY? Have you traveled with SOTY power before?
I’m trying to think. Maybe there’s been a trip that AVE and Trujillo were on.

Damn! You travel with first-class skaters, five stars, SOTY style.
Yeah, I’m down. I’m just trying to run with the big dogs, you know? Trying to follow in their footsteps.

What was one of the best tricks that you saw go down?
I would say, street-wise, maybe Evan’s crazy-ass boardslide through that kinked rail. But definitely the bros skating that crazy-ass vert ramp those dudes built in Germany. Yeah, it all kind of just blended together. But that session was pretty heavy, watching Raven and Grant get down on that. And the fact that that was the first session on that ramp. That had to have been so dope for those dudes.

Yeah, that vert ramp will never see the revs that those guys gave it.
Until we bring it back to Germany again!

Lets talk about Stuttgart. So you went to jail, you got arrested for nothing. You got falsely accused of a robbery.
Yeah, me, lil' Lou, Grant, Daan and Pfanner. When Louie gets behind bars, that’s when you know nothing went down.

What was going through your head when you got arrested? Were you, like, “Is this really happening”?
Yeah, I think all of us in there were just, like, “Alright, well this sucks but here we go.” I think Pfanner and Daan were in one cell and then me and Louie got separated. So we were, like, "Alright, sick." And we just all went different directions.

What was going through your head?
I wasn’t tripping because I knew we didn't do anything. But this was like 4:30 in the morning, so we’re just trying to get to bed and this is the last thing we’re trying to deal with. But yeah, it sucked at the moment, for sure. And the cops were just so happy with being dickheads. It was annoying.

The German police were happy. “Oh, we’ve got the Americans."
Yeah, they were fucked.

So you were in jail from 5 in the morning until 10 or 11 the next morning, right?
Yeah. I didn’t have time to be pissed off. Maybe just yell and see what's good—no answer, so I just fell asleep. I woke up, they took photos of my hands, front and back, and then went back to sleep. I woke up again and I heard Daan a few cells down and we were talking back and forth for a second and then they let me out shortly after that. Thankfully, I had two-percent on my phone, so I found the hostel and that’s when I saw you guys. The cops are crooked, man.

Who was your roommate on the trip? We had 18 people over there!
It was mainly me, Ishod, Zion and Oski.

How was it having Phelper on the trip?
Oh, I love Phelper, dude. He’s got endless stories for every situation, and they’re all dope and usually motivational. So it’s good to have him around.

Phelper gets you guys fired up, man.
Exactly. Seriously. No one's skating and everyone is quiet or something you just hear in the background, “Argh, just do it!”

He sees how good you guys are and what you guys are capable of.
Yeah, he already knows what’s going down before a trip even happens. Like, he knew what was going on; we’re getting it fired up!

What city did you like the best?
Zurich was awesome. I wish we had more time there. That was a super cool zone.

What were you guys hyping up on the music tip? What were you playing in the van?
It was me, Oski and Zion in the back with the boombox turning it up. We had the Chief Keef and Young Thug going, along with a lot of Frank Gerwer’s freestyles. Maybe sometimes a little Slayer, depends on the revs.

How was it skating all the spots with so many skaters?
I feel like that’s almost better, you know? You don’t really do that as much back home, so when you’re on the trip and in a country that you might never get back to and you’re just with certain people the energy level is so high shit just goes down. It’s not serious, though. You’re just out there having fun, not knowing what’s coming next. 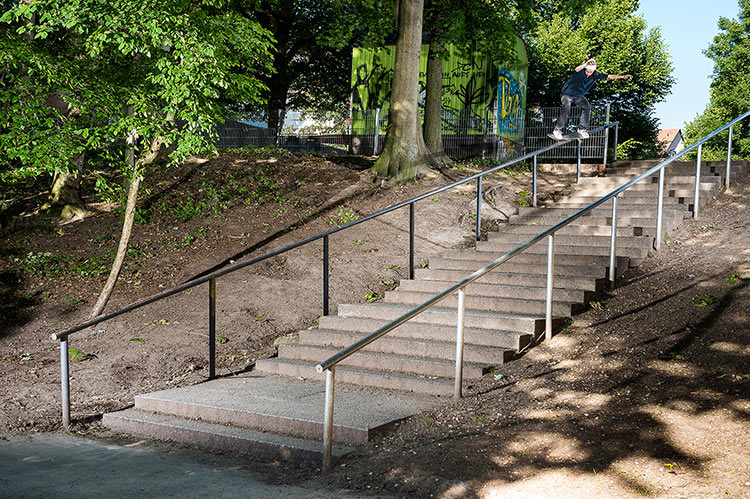 Same dude but a bigger feeble than on the last Thrash N Burn. K-Walks gets a Baker maker out of the way

It felt like I was in a shooting gallery with you guys. Like, “Oh shit,” I didn’t have time to set up flashes.
You were running everywhere, like, “Shit, too much is going on!”

It’s like trying to document a war scene or something. You guys are crazy!
I love it, dude.

Who do you think was the MVP of the trip from the time that you were there?
Well, Cory for that first-try backside grind out of nowhere on that huge rail. That was beast. I’m just gonna go ahead and say everybody, though. That shit was sick. It was so fun.