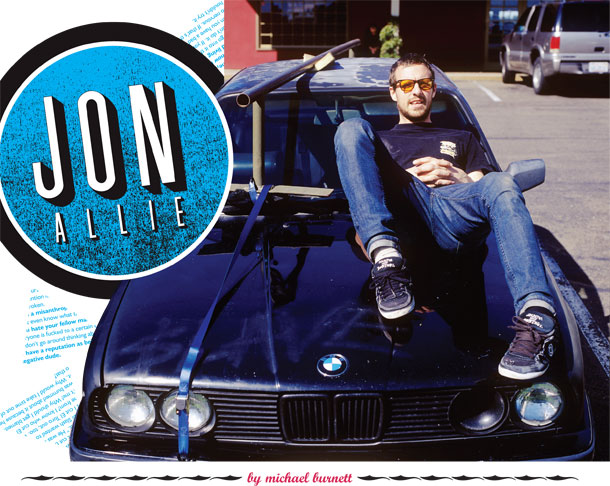 After riding for such a powerhouse company like Zero, why’d you decide to skate for an up-start like Slave?
I just really liked the whole team, who we were thinking about. I liked Ben’s art a lot. And when your board’s got a sick graphic, you’re stoked to skate. Like when you’re a little kid and you’ve got a sick graphic, it feels good to get a trick on it. It was fun to start something new, too, with a really tight team.  It wasn’t like I really left, either. I still get to see everybody.

Who did you pick for the team?
Frecks was already on flow. Goemann, who wanted to ride for Zero for a while, but he didn’t think he could really take the pressure of Chief. So that was pretty cool. Who else? Pat Burke. He’s a little too crazy for Zero. He doesn’t really like any type of control. Even though he’s completely mad, it works. His phone is never on, so every time we go on a Slave trip we just stop by his house. If he’s there, he goes on the trip. If he’s not, he gets left behind. The whole team is rad.

Does it have refrigeration and everything?
Yeah, he’s got it all. It’s pretty nuts.  I can’t believe you haven’t seen it.

"When your board's got a sick graphic, you're stoked to skate"

How come you never got your front  teeth fixed?
The only thing that’s annoying about it is going to the dentist. They always think I’m there to get my front teeth fixed. I’m like, “No. I’m here ’cause I have a cavity.” It’s cosmetic shit. You’ve got to pay a lot of money to look pretty. It doesn’t hurt. It doesn’t bother me. Until people mention it, I don’t even remember that they’re broken.

Are you a misanthrope?
I don’t even know what that means.

Do you hate your fellow man?
Everyone is fucked to a certain extent,  but I don’t go around thinking about it. 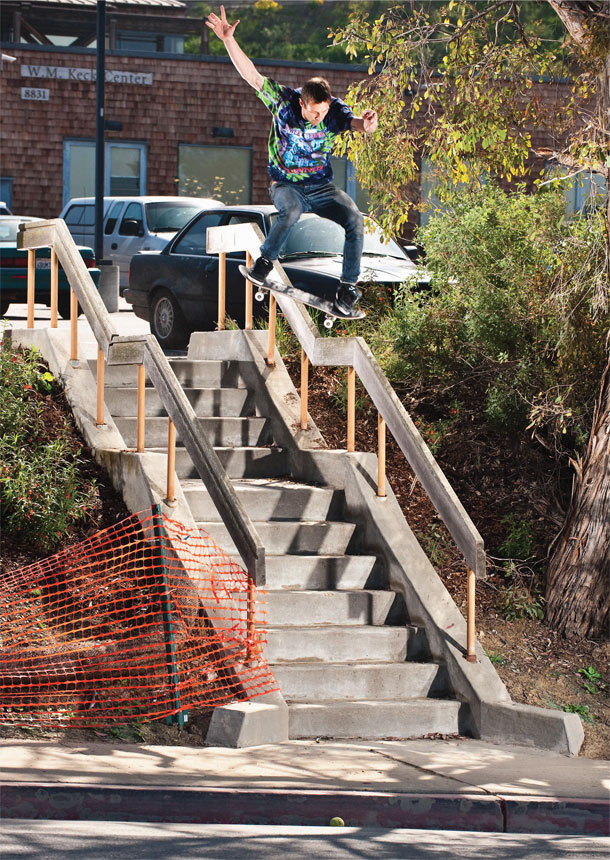 Gap out to noseslide. Photo: Shigeo

You have a reputation as being  a negative dude.
Yeah. I get that, but I guess I’m too straightforward. There was a time when  I was probably a little too negative, but that was when I was younger. Fuck. I’m tough on myself, too. The negative comes out and I probably look like I’m being too negative. I have a really dry sense of humor. I laugh. All my friends know. But people who don’t know me are probably thinking, “What the fuck’s wrong with this guy?” That’s alright. I know.

When you were younger, you had an insane amount of concentration for skateboarding. You probably did 1,000 kickflips a day. Are you still like that?
Yeah. I’m probably just as obsessive-compulsive as I used to be.

Is that what it is?
Pretty much. You want that kickflip that’s going to feel perfect. It’s just a good feeling. Then, once you have a taste for it, you want more. I guess that’s how it is with anything.

I’ve never messed with anything like that. What’s that stuff feel like?
You can’t really describe it.

Is it like love? You only understand  when you’re in it?
No, I think you’re thinking about ecstasy.  I don’t really know how to explain it. I guess you’ll just have to try it.

Nah. I’m scared.
There’s really nothing to be scared about. If you’re in normal surroundings and comfortable with where you’re at, nothing can really go wrong.

That’s what you think. I’m going to be that guy where they say, “He just tried  it one time. And now look at him—wetting his pants and living in his parent’s basement.”
If you go into it thinking like that, you probably shouldn’t do it. If you’re nervous about it, that’s when you have a bad trip. You’ll make yourself too nervous. If that’s the case, you probably shouldn’t try it. 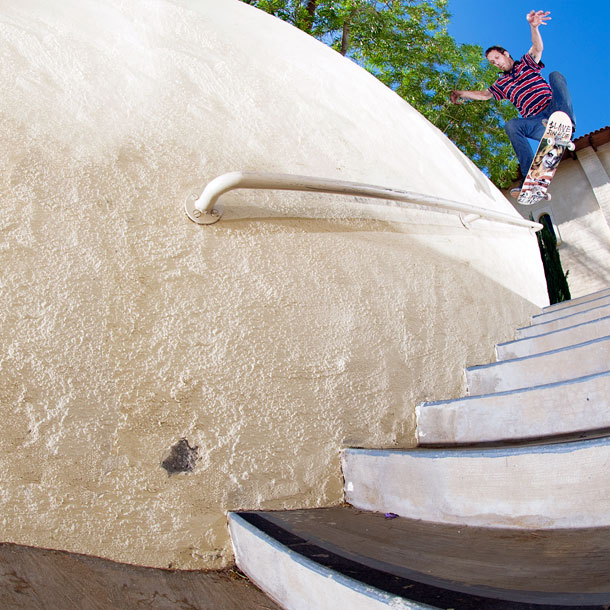 Are there any skate videos you’re trippin’ out on these days?
I don’t really know if people watch videos over and over anymore these days, but I’ve been watching the Slave video a lot. I don’t watch it and watch myself, really, but I like watching the people in it and I like the music. The way they skate, I feel like I skate similarly and I get real amped. I was real psyched on that Beauty and the Beast video, too. That was sick. Dude, there’s just too many videos out there. Your mind has a meltdown about how much cool stuff is going on.

You ever surfed?
Yeah, I surfed before. Let’s just say you shouldn’t try to surf when it’s six-foot waves. It was fun, but I’ve never really done it enough. The ocean’s cold. Lakes are warm.

Are you going to surf the Great Lakes back in Wisconsin?
You can. They get five-foot waves. Lake Michigan’s cold as hell, so you might as well just surf in the ocean.

Do you have a trick that will be the measure of your abilities?
I don’t really think about it like that.  Tricks come and go, you know?

You think you’ll be able to back lip a 10-stair at 40?
Probably not back lip, but I can probably kickflip back lip it. Back lip’s scary, man.  I think it’s just easier. You kickflip and it goes where you want it to, and then you land back on it. I know that doesn’t make sense, but it makes perfect sense to me.

Do you want to work on cars for a living?
Yeah, maybe. I don’t know if I want to make a living working on someone else’s cars. 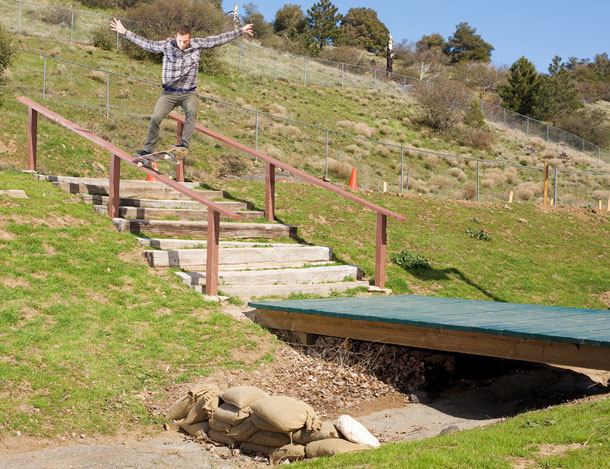 Do you have a killer set of tools?
You know, they probably should be killer, but I think they’re probably average. You can get a bunch of fancy tools that do everything, but you just don’t need that. All you need is a Phillips, a flat-head, open-end wrenches, and sockets. That’s pretty much it. Maybe  a hammer.

You’ve pretty much got everything  you need.
I’ve got a ramp in the backyard, too.  I’m about to put pool coping on it.

That thing’s too mellow for pool coping.
Not if the pool coping’s free. My friend has  a house with a shitty, unskateable pool, but the coping is perfect. I could build a foot on to it. I’ve got woodworking skills, too.

Let’s get to the controversial part of  the interview. Did you cut a handrail  so another skater couldn’t skate it?
Oh, this shit! I wish people would stop blaming people for stupid stuff.

Well, let’s settle it here in The Bible!
Okay. Yeah, for some reason. This is a good story. Hopefully Jamie doesn’t get pissed. He probably won’t. Anyway. In the park there’s this 11-stair rail. Russell, one of the filmers, cut the back of it off so Garrett could ollie-over grind it. And Jamie walks into the park and immediately thinks it’s me. He’s pissed off, so I hear. He leaves and is pretty bummed about it. Eventually he heard that Russell did it. Why should I get blamed for stuff like that?  I’m all, “Hey man, I didn’t cut that rail. I don’t know why you’d think that.” He was like, “Well, I heard you cut some rail Slash wanted to skate.” Apparently he thinks  I cut El Toro out, too. Where does all this come from? I know who cut El Toro out, but it wasn’t me! Why should I get blamed? I guess Brian was bummed about it because he thought I did it. Why would I take time out of my day to go do that?

So you didn’t do it.
No, I wouldn’t do that. I don’t think Brian and I were on good terms for a while because he thought I did it.

This may have to be an OJ Simpson-type thing, where you have to find the real killers to clear your name.
That one’s beyond me. It doesn’t even  make sense. I’m pissed.

You wouldn’t do that.
The only time I’d cut a rail is if it had a kink on the end. That’s the only time.

Well, I had to ask the tough questions.
That’s a very good question, because I want to get this shit cleared up. People should stop assuming things like that. I would never ruin  a skatespot.