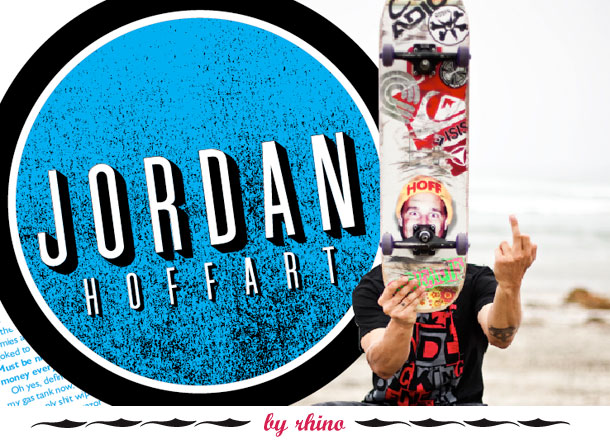 Are you a Red Dragon?
No, I didn’t really grow up with any of the Red Dragon dudes.  I knew them, I just wasn’t in the posse. I had my own thing going with my homies, the DPOG: Douglas Park Original Gangstas.

Where were you born in Canada?
I was born in a town 45 minutes east of Vancouver called Maple Ridge.

What’s your first memory of skateboarding?
First memory was when I was about five years old and my dad drove me out to the famous Skate Ranch, where McKay and Sluggo ripped when they were kids. It was huge; the vert ramp seemed impossibly big. I just rolled around on my knees on the bottom of the flat, trying not to get in anyone’s way. It was surreal, for sure.

"It's all about maxing out your mental toughness"

Who were some of the pros you looked up to back then?
My skateboard knowledge was pretty limited. It was only when I was 10 that I finally watched my first skateboard video, the Airwalk ’95 promo video. It had Hosoi, Jason Lee, Sluggo, and Tony Hawk. Jason Lee was my favorite. After getting a taste from the Airwalk video, I bootlegged a bunch of skate vids from my cousin. The XYZ video, Stars and Bars, would definitely be the video that I watched religiously. Danny Way’s part was incredible. All the skating seemed super next-level, and I loved the metal soundtrack.

Who was your first real sponsor growing up?
Skull Skates, out of PD’s Hotshop in Vancouver. He saw me at  a local skatepark and said I looked like I was having a lot of fun.  He threw me his card and said if I ever needed a board to hit him up.

What about your first editorial photo  in Thrasher?
I think it was a boardslide photo on this kinked rail in Tallahassee, in a “Florida Sucks” article. Late 2004, or maybe ’05. I was super-hyped, for sure. 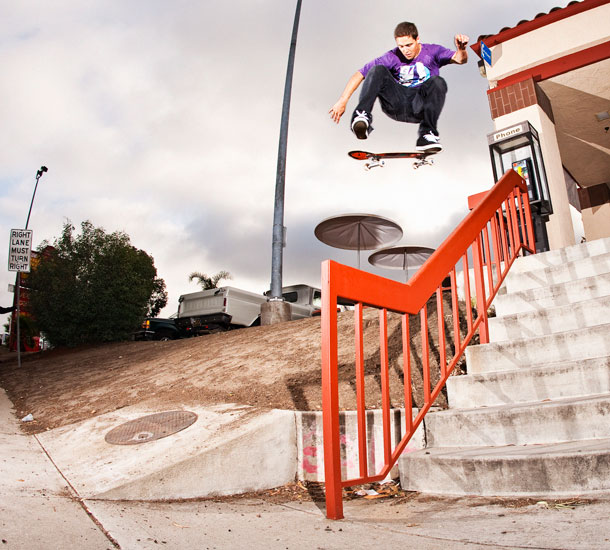 You skate some pretty big stuff. Do you do any training to keep your legs strong?
Yeah, dude. I break off the Mrs with the down stroke on the regular. Seriously, though, I actually just started doing this endurance and power program with ex-Plan B TM and fellow Canadian Sean Hayes. It’s all about core and balance, and maxing out your mental toughness. Dude, my legs get so tired. But I can feel I’m snapping my ollies higher, for sure.

Let’s talk about the noseslide in this issue. What were you thinking? When did you eye that up?
I usually think, “Dude! You got to step this shit up, fool!” I try to think of what most people wouldn’t consider. I admit that most of the time I don’t really think I’m going to land it, but if I call up a photographer and filmer—especially people I’m not comfortable with—I’ll force myself to go for it. I hate wasting other people’s time. Surprisingly it’s worked out, for the most part. Then again,  I have brought you out multiple times and not gotten shit! Sorry, buddy. Twelve-pack on me.

It’s six stairs, then 17-feet of flat, then another six stairs and 17 more feet of flat, four more stairs, and then a drop that’s over head-high.
Fuck it, dude. It’s just a noseslide.

"It's just a noseslide"

Worst slam so far?
Definitely the headbanger fall in my Digital part for Get Tricks or Die Tryin’. I fell eight feet straight to my dome piece. I couldn’t remember people’s names for six months and I definitely slurred my words pretty good for a while after.

You recently just got a shoe sponsor. How long were you without one?
I’ve been on the flowgram for over a decade. People would always ask me why I didn’t have a shoe sponsor, and I never really had an answer for them. But it all worked out, and the good homies at Adio hooked me the fuck up. I’m so stoked to be on the team. Major shout-outs!

Must be nice getting that extra chunk of money every month.
Oh yes, definitely. I can actually afford to fill my gas tank now. I even splurged this month and got two-ply shit wipers and the Quattro shaving razor—no more razor burn. Feeling the luxury. 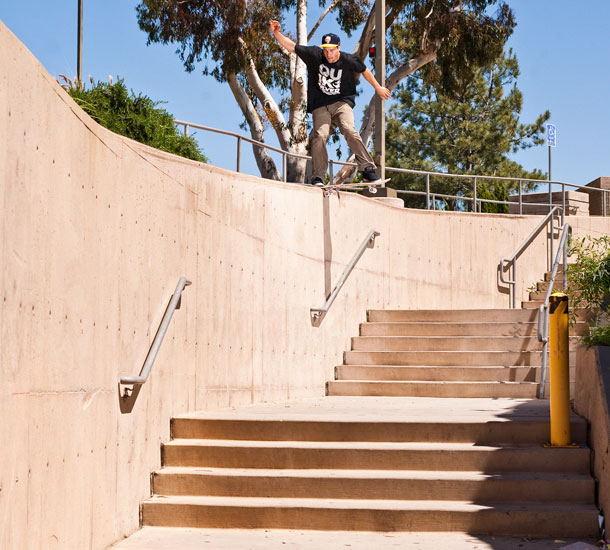 What’s going on at Adio lately? They just revamped their team; any shoe works in the future?
It’s so sick right now. I’ve been on for about two months, and we just put Nick Tucker on the team. He’s the illest. I think we have our minds set on a couple more riders. But  we’re hyped on where things are going.  Watch out for that pro Hoff shoe coming  in hot next summer.

What kind of stunt work did you do?  Any big-name films?
I had a small role as a vampire with a fight sequence in Blade Trinity with Wesley Snipes; then right after that I landed a lead role in a WB kids’ pilot show called Zolar. That was supposed to get picked up for a season, but money got thin and the show was cancelled.  I think it was for the best. That shit was pretty damn gay. But dude, I made a grip of cash at the time. Movies pay out huge.

"I fell eight feet straight to my dome piece"

What’s up with the crown tattoo on  your forearm? Is there a story behind that one?
I was drunk. I’m kidding. Well actually, I’m not, but it was loosely planned. My girl got one a couple days before me, and I thought it looked tight so I cruised in for mine after a few sodas. Then I discovered that it looks exactly like the King Stallman’s Bail Bonds crown. Maybe they’ll hook me up with a get-out-of-jail-free card if I ever get into trouble.

I hear you’ve been trying to skate the Mega-Ramp at Bob Burnquist’s house. How’s that working out for you?
I wish we would’ve got something sick over the gap for this interview. I haven’t done the gap yet—I couldn’t sign a waiver because Bob was busy. But he’s down for me, and we’ll get it cracking soon. I did get to drop in on the QP and grind the coping, too. Both were equally scary.

What’s the go-to grab, stinkbug blaster?
I’d like to tweak something out, like a Cardiel frontside tweaker grab. I always thought those looked so tight. We’ll see. Maybe I’ll try to throw an old-faithful varial heelflip out there when I get more comfortable. 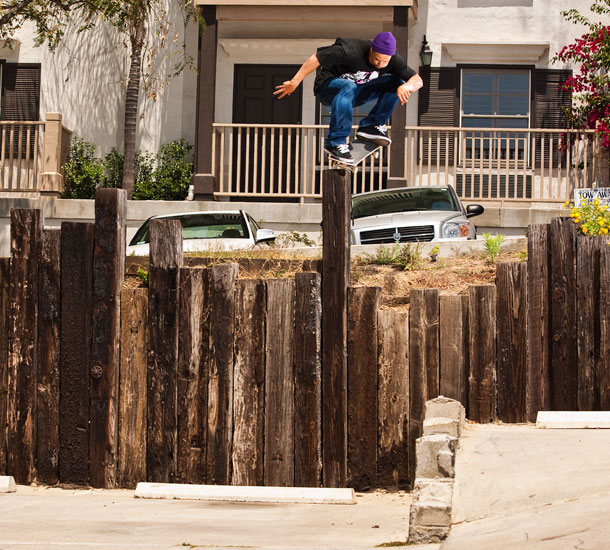 Do you have some sort of  vert background?
Not at all, really. I could roll around and slash vert coping, but that’s the extent of my vert skills. I’ve been shredding the new DC vert ramp with PLG lately. Watching him and Jake Brown have helped me a lot. They’re so sick. I’d like to think I’m getting better at it.

Rumor on the street is you bought  an SS Nova.
It’s a ’71, but it’s been in the shop for five or six months now. I bought it last year off this guy Oats in Palm Springs after he reduced the price by $4,000. It was either his car or his house, so he was in a pinch and I got a great deal. I’ve got a friend, Carlos Villabolos, doing all the body and paint—but there was way more work than we both anticipated. We had to strip three layers of paint to get the car down to the metal.

Are you using that for a tax write-off? I hope so, because those cars are fun, but they’re money pits for gas and maintenance. Not to mention speeding and burnout tickets.
It’s definitely a write-off. I wouldn’t have  it any other way. Anybody want to use it for  a catalog?

How much are you putting into it?
The initial investment was $7,200, which was nothing for what it has in it. And I’m getting the paint and body work done for a steal at $4,500. So I guess its around $11,700. But then there’s interior work, which I’m sure will cost a couple thousand, and I’ll have to get those pro touring rims. The list will go on. Oh man, what have I gotten myself into?

Are you planning on racing all those other skaters like Chris Troy who’ve got hot-rods in Southern California?
Of course, and I’m going to serve them all. Just kidding! Those guys could run circles around me with their knowledge of cars. I’m pretty much just winging it and learning on the way. I’ve always been interested in old muscle cars, I’ve just never had the time or money to get into it. But now it’s on. I know both Jon Allie and Mike Sinclair have Novas, so maybe we can start racing each other on the weekends.

What are your plans for the rest of  the year?
Tons of tours and contests. Dew Tour, X-Games, Maloof, hopefully. I got invited to Korea for a contest out there this summer;  I heard a rumor about a China and Thailand trip in September, too. Sell my house, buy a new house. Finish my car. It’s pretty hectic right now. But at the end of the day I get to skateboard for a living, so it really couldn’t be better. I’m so hyped.