Meet the Men of Madness 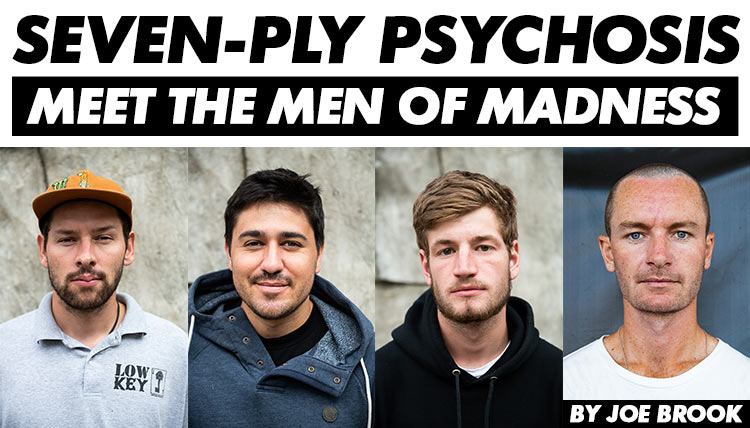 Madness comes in many forms. Understanding what to do when you encounter it is a task very few can comprehend. Skateboarding is pure MADNESS! Prepare for the ride. —Bill Weiss

How did Madness come about? Whose idea was it?
Sam Beckett: I think Weiss and Bod Boyle came to me and asked me what I thought about the whole thing. I was riding for Blind at the time and wasn’t really fitting in there, and they wanted to do something more tranny oriented.
  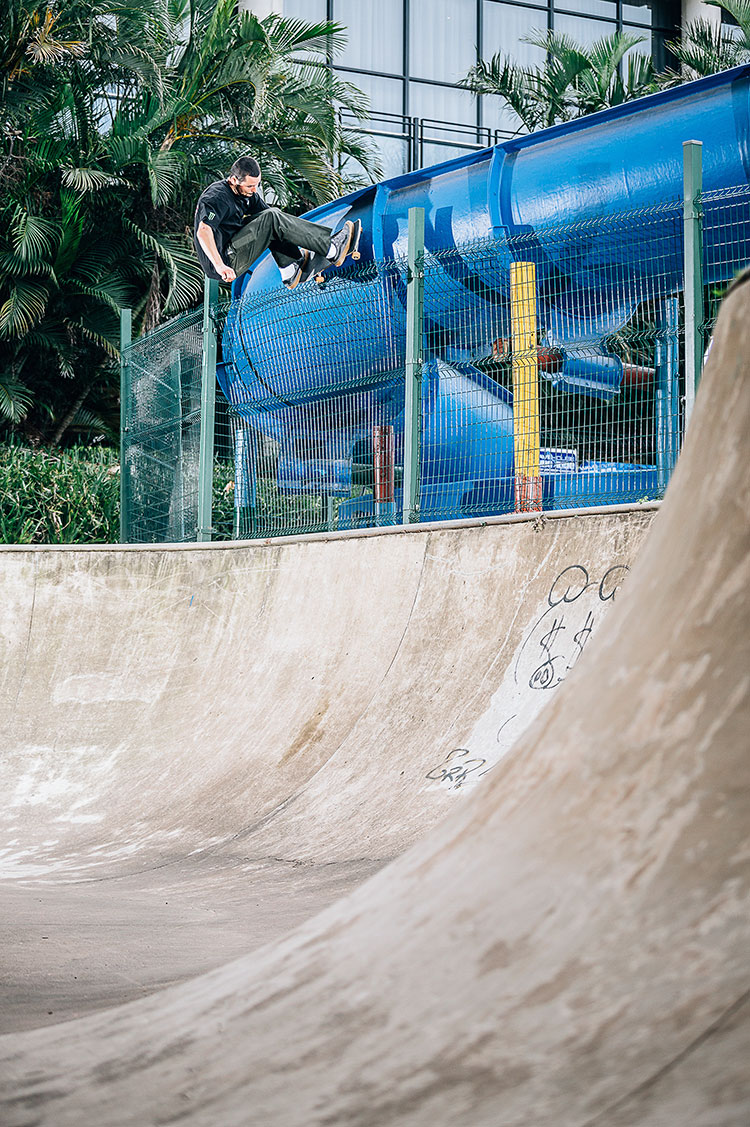 So you were the first on the roster?
S: Yeah, just because I already rode for Blind. I was working with Weiss and Bod and I live with Alex and Clay, so it kind of fell into place pretty easily. Then we got Jack in the mix.
Alex Perelson: I didn’t believe Sam until I heard it from Weiss. I was, like, I can’t believe that they’re gonna ask me to ride for them. I had to get confirmation from Weiss before I thought it was real. 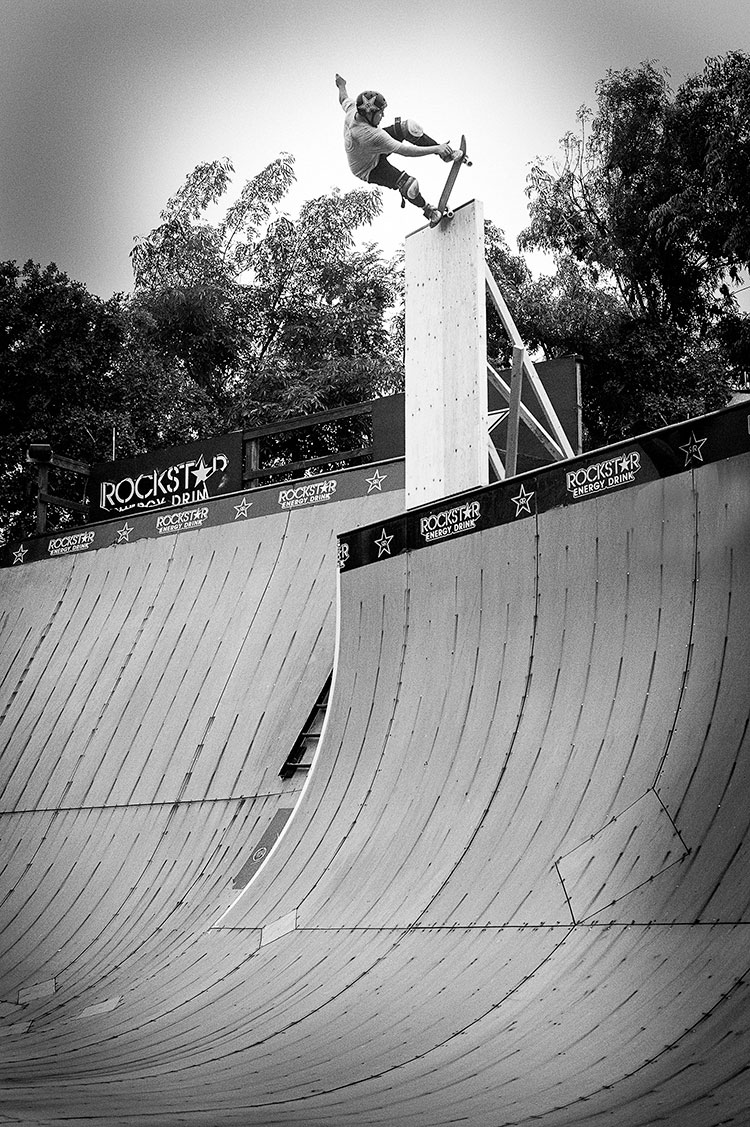 The oxygen mask will soon deploy for Alex’s pivot to fakie     Photo: Burnett

How did you come into the mix, Jack?
Jack Fardell: Bod hit me up first. Then Weiss hit me up probably a year ago. We were at a contest and he told me that he was starting a tranny company with Clay, Sam and Alex. Then I didn’t hear anything about the company so I didn’t think it was gonna happen. Then Bod hit me up a couple months ago wanting to talk. We sat down to chat and he told me what was going on and I looked at all the boards and the product and they told me that these three legends are gonna be on the team and that’s about it. I was all in!
  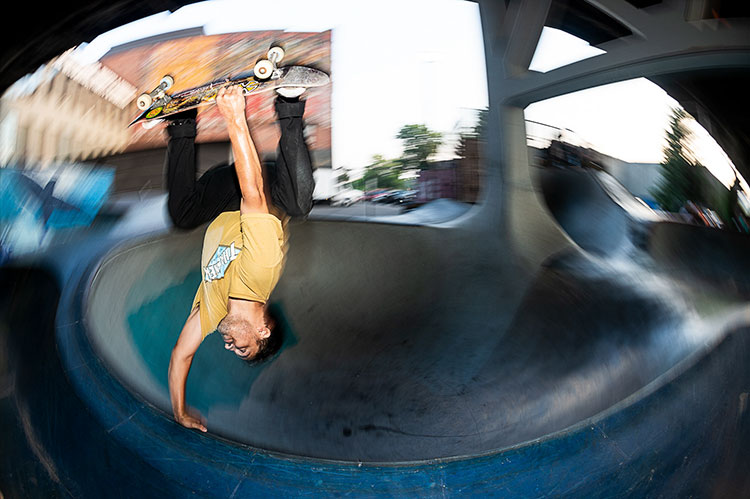 Alex’s eggplant at Burnside sounds like a special at a vegetarian diner     Photo: Brook

How bout you, Clay? How’d you get in the mix?
Clay Kreiner: It kind of just fell into place. I wasn’t riding for anyone for a bit; I knew Weiss a bit; we had spoken before about some random things. I knew him through Sam but I don’t know if I heard it through Sam or Weiss first to be completely honest. But around the same time, Sam, Weiss and myself started talking about a company. That was probably well over a year ago.
S: We’d been talking about it for a long time, then it just kind of went quiet.
C: Yeah, it went quiet for a bit, then it’s just been a kind of slow roll out. I’ve been stoked on the timing of everything, not trying to rush into anything. We got the sickest crew together and I think that the guys that they were able to gather together is fuckin’ incredible. I’m stoked to be a part of this team! 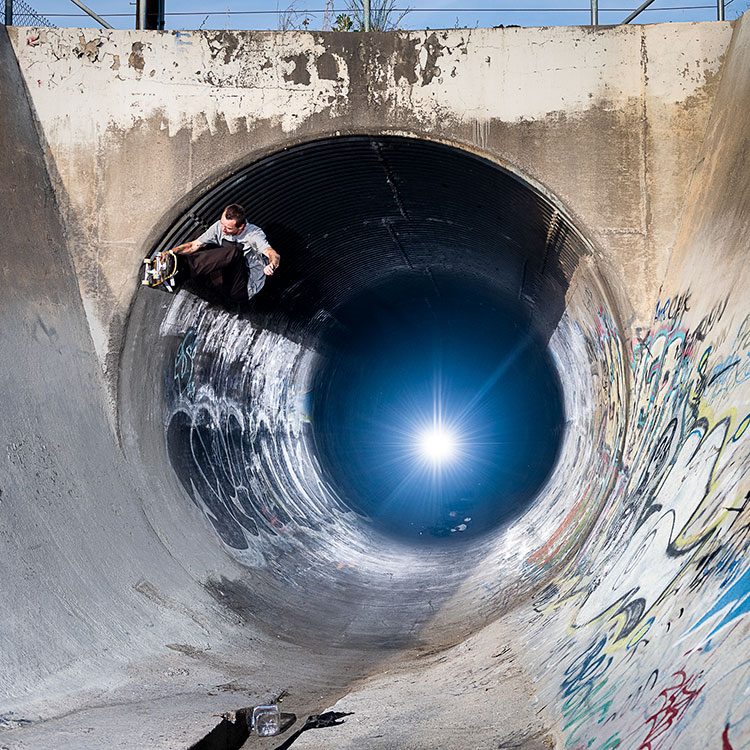  Like a GD cannonball shot out of a cannon—Fardell, fly-out FSA     Photo: Hammeke

Is this how big you’re gonna keep the team or are you gonna expand it? Is it gonna be a total tranny team?
S: I really have no idea. It’s kind of up to us and Bod and Bill. I think it’s just, like, if people fit into place, you know?
Alex Perelson: We have a network of friends that we’re so hyped on and we want to give them boards. And everyone we’ve shown the boards to are super stoked on them so it will come together slowly.
J: Yeah, it’s gonna grow.
C: Yeah, I definitely think that the team will grow but I think for now it’s super sick. We definitely want to hook up as many of the homies as we can and spread the word and hope that everybody’s stoked on our vibe and all that shit.
J: The best part, for me, is every time something happens, someone that we want to give boards to or whatever, Bill’s, like, “Whatever you guys think. You guys talk about it. It’s up to you.” So everyone gets to have a say. Everyone’s involved and everyone’s stoked on it and that’s how it happens. That’s the best shit ever.
S: Yeah, I also think that since we all have input we don’t want to make it too big. It’s nice to be all moving in one direction.
  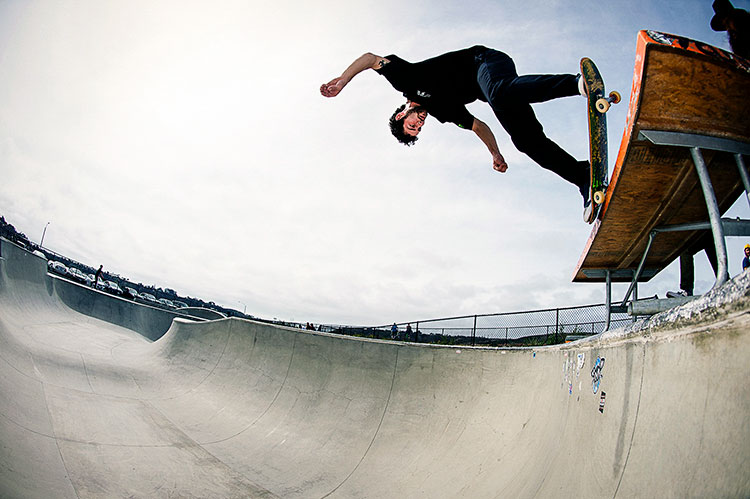 So all you guys are essentially team managers to a certain extent.
C: They’ve definitely given us a lot of freedom to have a say on the skaters we are stoked on or not stoked on. We have a team group message going on to find skaters for the team, skaters we’re hyped on and want to give boards.
S: I think nowadays it’s kind of rare that you’re on a team with people who you want to hang out with a lot. We’re super juiced on everyone.

And you guys all live together?
A: Yeah, so it’s pretty easy. Minus Jack. He doesn’t live with us.
  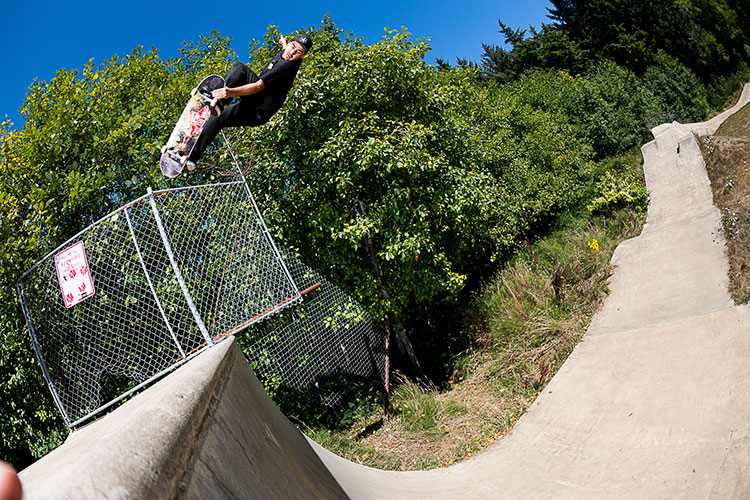 After doing some major park repair with Red, Alex gets his lien on in Lincoln City     Photo: Brook

And all you guys are friends. I feel like there’s a lot of companies out there that where the riders aren’t actually friends. They’re more like employees.
S: Yeah, I rode for Blind for almost ten years and all those guys are sick but I would never even see them unless we were on a trip. So I’m pretty psyched to go out and skate with the guys that I’m on the same company with. It’s pretty sweet.
J: That’s the thing, too, for me, is being stoked on the people you’re skating with and people that are skating the same stuff as you and getting stoked to try something gnarly—that’s a team. That’s the best shit.

Who’s doing the graphics? Do you guys have an artist or is it just random shit?
S: Francisco Goya. 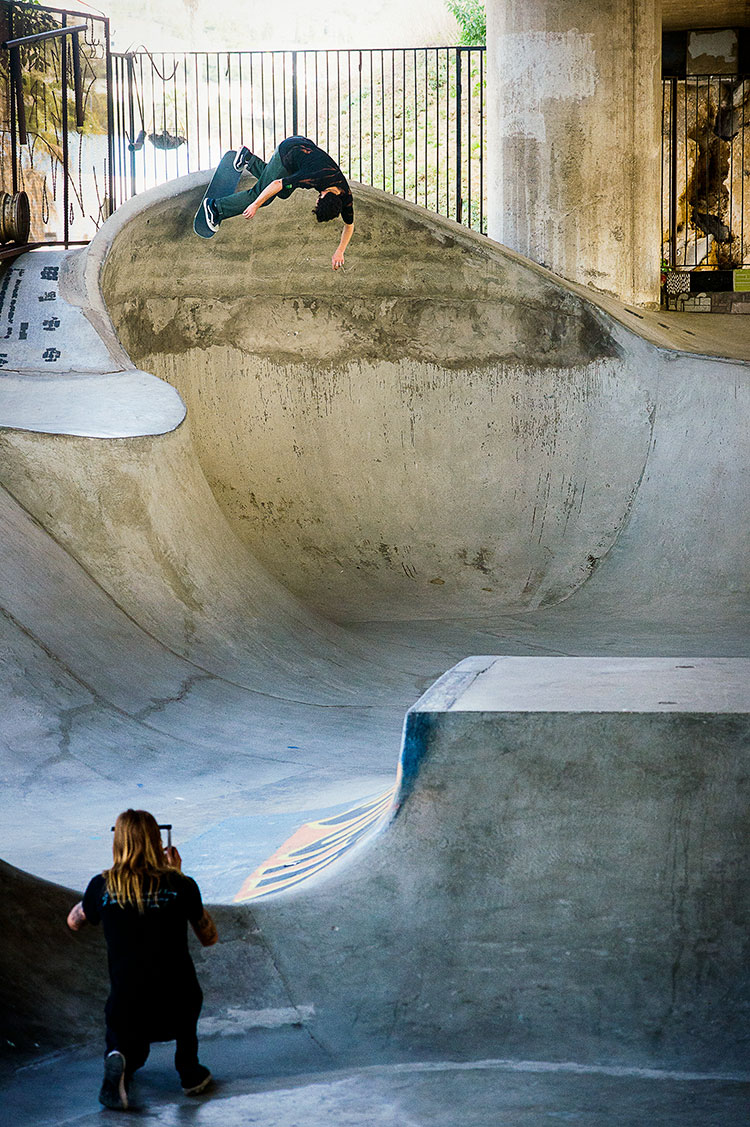 Sam taking it beyond the vertical plane—back Smith with a view     Photo: Burnett

Do you guys have a say in the direction you want the graphics to be heading?
C: I feel like they took the direction in a way at first. But I’ve been so hyped on everything that they’ve produced and if there was anything I thought was whatever, they’ve given me the chance to voice my opinion so we can switch it up. I’m super stoked on it.
J: It’s more like they’ve given us options and we move towards one thing. It’s been pretty cool. They’re doing a good job.
C: There’s some new stuff that I’ve never seen before, like some of the details on the boards where half the board is a hexagon texture. Just little things like that.
S: Split veneers and inlays—the boards look really cool as a product. i’ve never seen shit that looks like that before.
A: I guess a lot of the shop guys were, like, “I don’t know whether to skate it or put it on the wall,” which I think is really cool. 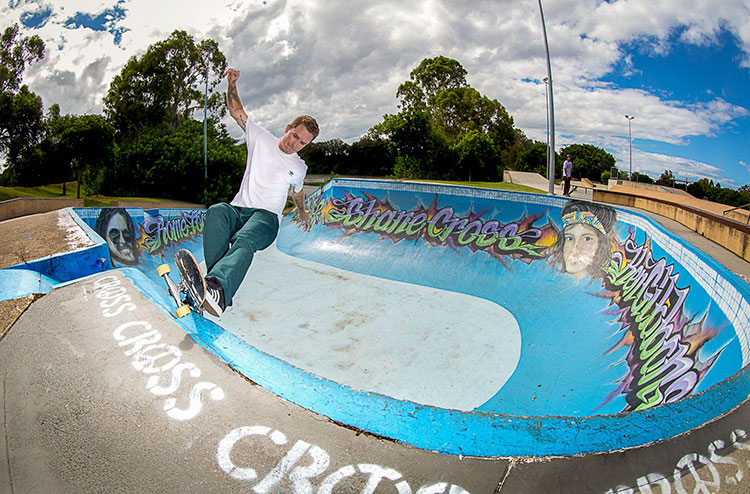 Fardell digs in on his home turf—hefty over the channel to front feeble at Pizzy     Photo: Kirby

Dwindle has their own wood factory so that’s a powerful thing that you guys can do something different than what a lot of companies can do.
C: We can do any shape and anything you want, really. It’s been fun. I’ve never really played around with shapes a whole lot until I moved out here and especially now that I’ve been working with Dwindle. If I want to switch up my concave a tiny little bit it’s like—boom—it’s done.
S: The other thing that’s sort of different about this is that we’ve been working with Bod and Bill and they haven’t started up an in-house brand in a really long time at Dwindle. They’ve just inherited brands. So I think it’s pretty cool for them as well to actually get to try and make something new.
A: My brother sent me some graphics that are pretty amazing that I think we should take a look at. 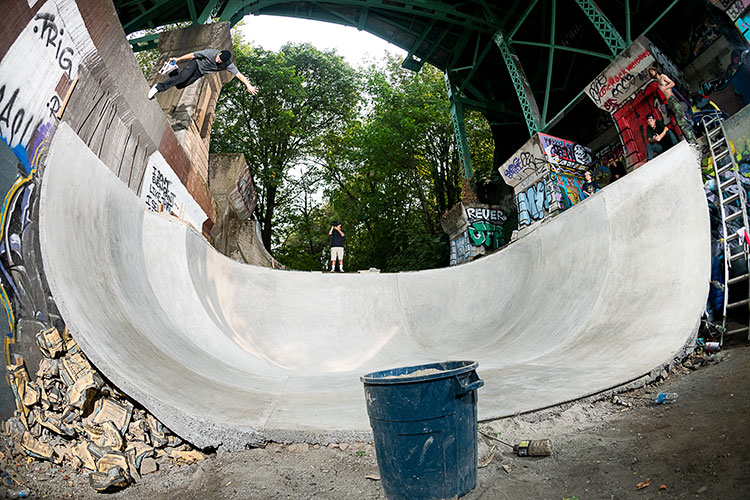 Sam finds a safe place to perch a backside boneless above the syringes scattered below     Photo: Brook

What’s up with the video that’s about to drop? How long have you guys been working on it? Is it going to have a certain look?
A: I was blown away by what Chris Gregson put together. I was really pleasantly surprised at how great it turned out. We were all nervous because we didn’t have a whole lot of time. Clay put out a full part that was full of bangers on Thrasher right before this and Sam’s been filming for several projects.
S: We hadn’t seen any of Alex’s footage until the other night. It was pretty sick to see all that together.
J: Yeah, there wasn’t much time. I guess I only really started riding the boards two months ago. I just had some stuff lying around and they said this video was gonna come out so I went on tour with these guys and went on solo missions and skated a bunch of pools. We went out to Vegas a week ago where it was 115 degrees. We would go out to skate pools at seven in the morning to try to get clips for this thing.

Did you get some new footage from there?
J: Yeah, I got a couple of things. You could only skate for about half an hour, then you’re lying on the ground from being so hot. It was fun. It was sick to try and get something done real quick so I could have something in there with these gnarly bastards.
S: I mean, we all have pretty hectic travel schedules so the last few months has been kind of a scramble. But yeah, we got some stuff.
A: It’s been madness.
C: Yeah, it’s been crazy. I’ve been on the road more than not. I just finished that Thrasher part that came out a month or so ago, but I’m stoked on the footage I was able to film during the short period of time we had. I’d been kind of hurt for a little bit and was super juiced on filming and this hole thing happened. But I’m feeling good to be back on my board soon. I got to see a bit of the video the other night. I’m stoked that Chris Gregson’s editing it. I love that dude’s style and I can’t wait ’til Thursday to see the whole thing come together.
  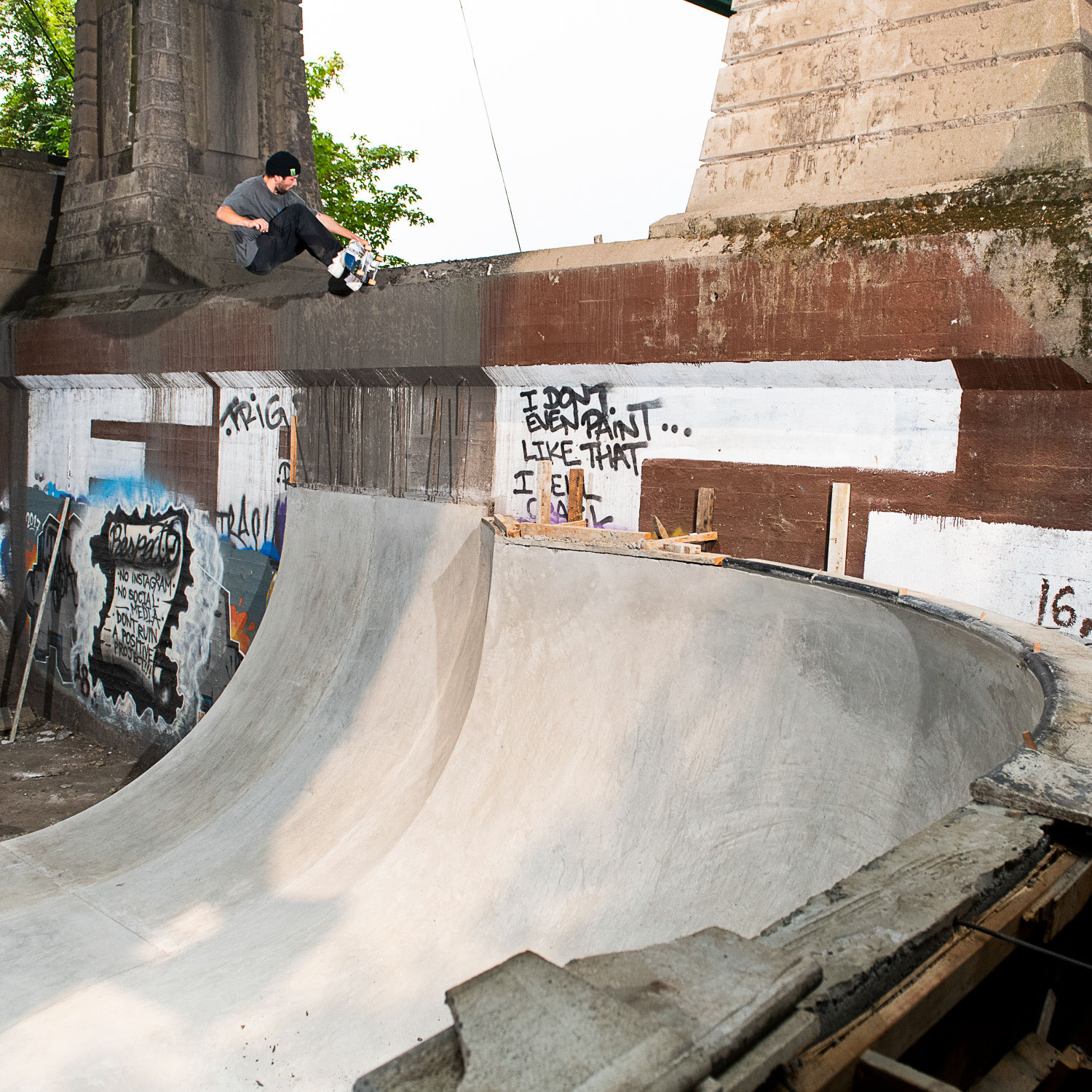 What are you guys gonna do with tours and stuff? What’s the plan? Are you guys gonna do all park tour stuff or are you gonna go cool places and skate other shit?
S: I think that the biggest thing for me is that we get to go and travel and visit some sick places all together.

Where’s Madness going first? What’s the plan?
S: Fuck, I don’t know after this Oregon trip.
A: We should go to Copenhagen
S: Yeah, I think there’s talk about Europe, so that would be sick.