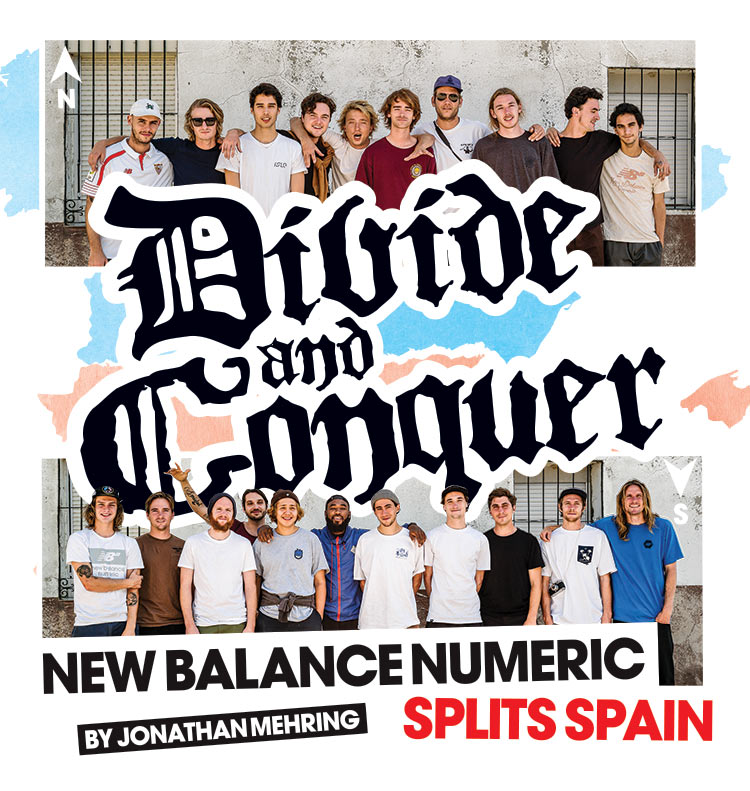 There were 24 of us in total when we arrived in Madrid. It’s hard to sneak around and hit spots when you’re two dozen deep—too many skaters and camera men tend to draw unwanted attention from police and spectators alike. So the decision came down from above: the team would be split into two groups. Half of us would head North and half would venture South. The crews were picked at random and we weren’t told who was with who until the night before our journey started. I caught up with Arto Saari, the eldest and most experienced member of our crew, to get his take on this Spanish adventure and the North versus the South rivalry that ensued. 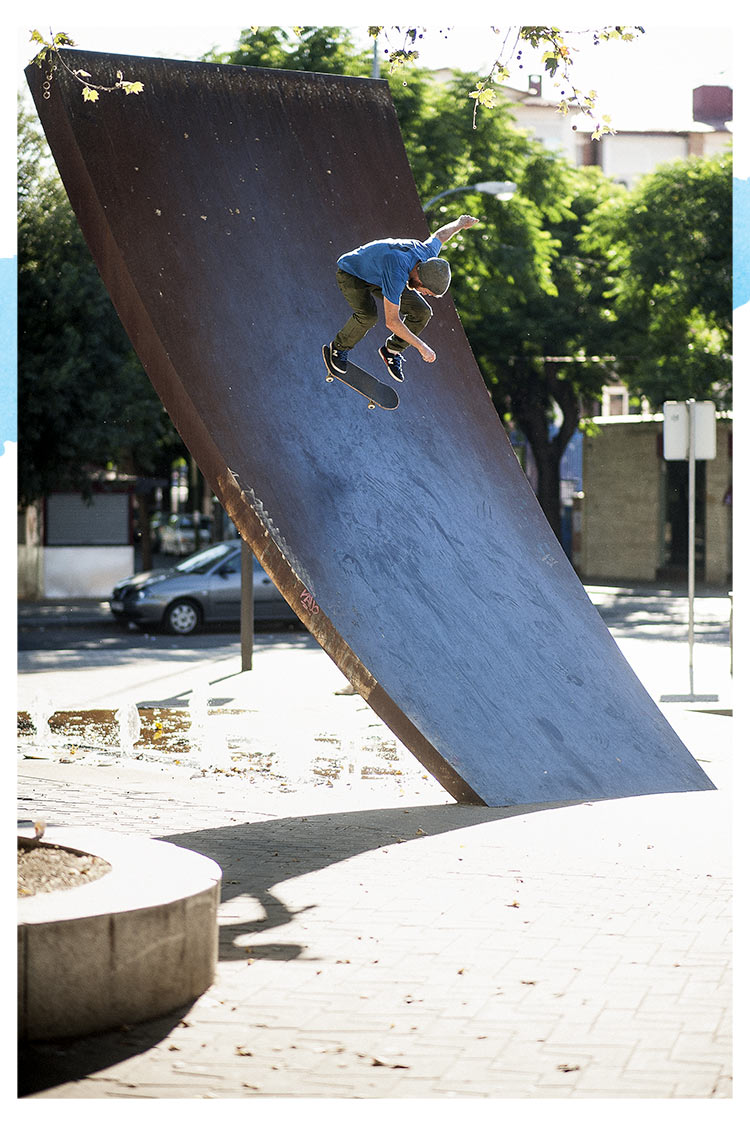 It’s been a hot minute since PJ Ladd’s been in the Bible. The beard? That’s new. The undeniable, flawless ripping? Not so new. Backside heelflip on a metal mountain     Photo: PIRES 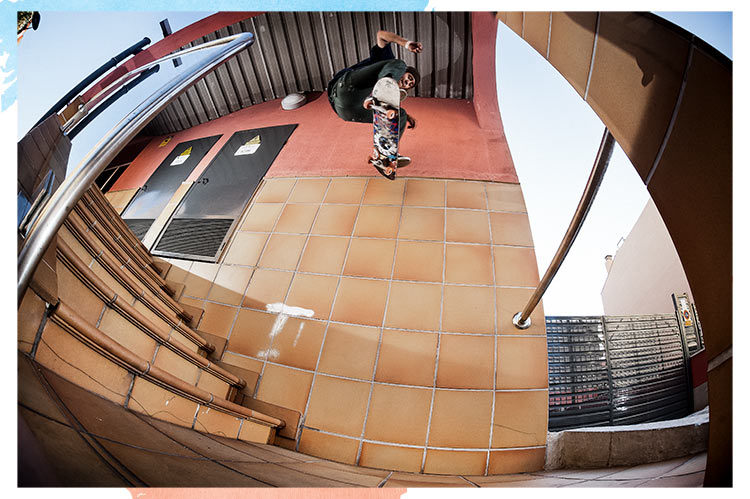 This was Franky Villani’s first trip to Europe and he took to the spots (and possibly the local fashion?) with incredible ease. Frontside flip over the bar     Photo: PIRES 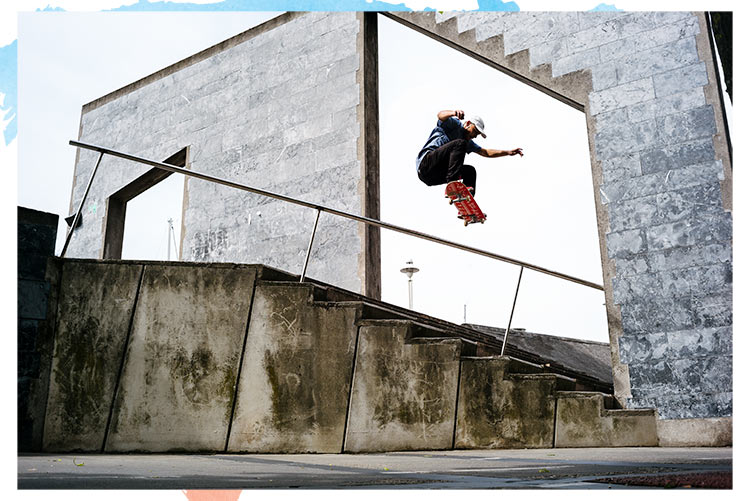 You know what that window needs? A Curtin. Jack, frontside 180 nollie     Photo: MEHRING 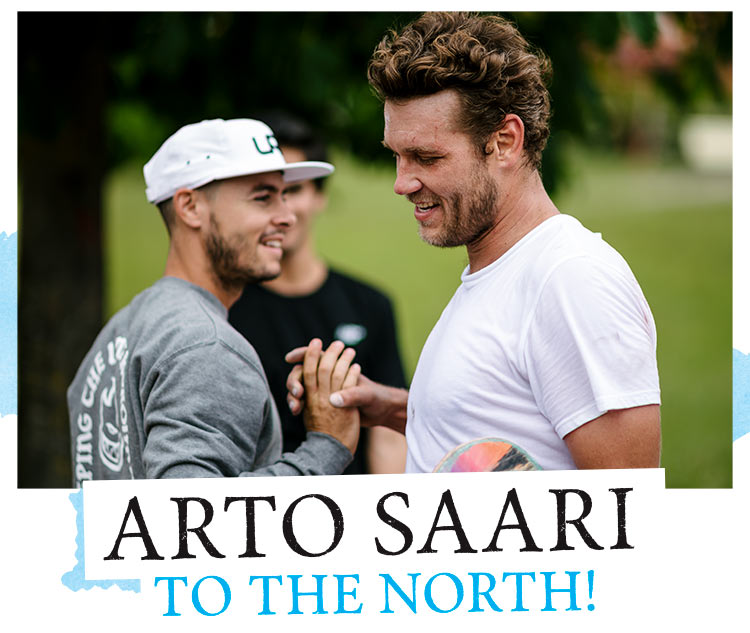 Can you explain how the trip was broken down?
Well, there were people that went North and there were people that went South, so there was a little bit of dividing. Then it became—well, I don’t know if it became anything, but definitely the North crew became pretty tight and embraced going to the North. The South seemed more like a beach holiday. The guys from the North just went fucking apeshit, fucking went after it. The fucking South crew was just, you know, they fuckin’ kicked their feet up on the beach drinking Mai Tais and piña coladas and shit. Even though I did see PJ got some rad shit.

So he’s pretty much the only one that skated or what?
No, the guys skated. The guys fuckin’ shredded hard on the South trip. I saw some of the photos. I got a little sneak peak of what Alex shot and it was cool. But we killed it. To the North!

The New Balance Numeric team seems kind of Euro-centric. Was that intentional?
Well, Flo and Axel are European. Knox pulled the Brexit, so he’s not really European anymore. And then we’ve got Jake from Australia. I think it’s a pretty good geographical mix. I’m sure there’s a little bit of a plan in place. But at the same time, that’s not everything. It’s, like, when we were on a trip to Australia, Jake Hayes came on it and he ripped and we were, like, “Fuckin’, let’s put him on,” you know? The same thing with Axel. We’ve been going on trips to different parts of the world and it seems like we’ve been picking up team riders along the way so it’s been kind of a natural occurrence. 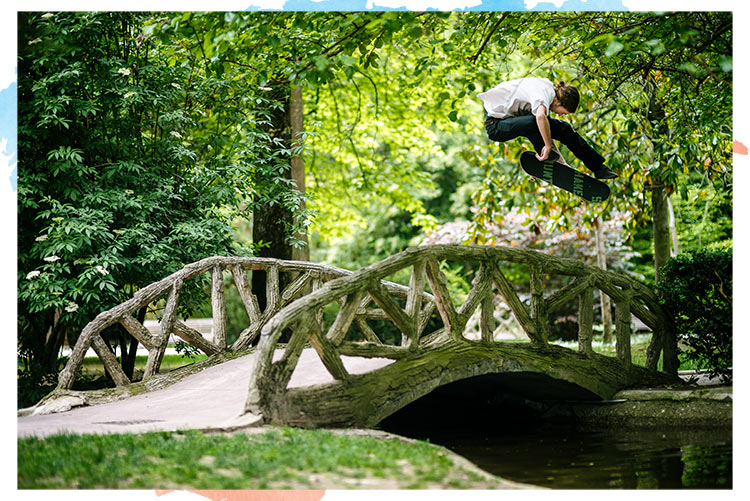 Jake Hayes blasts a kickflip melon over a spot straight out of a Tolkein novel. He wrote The Hobbit, dudes     Photo: MEHRING

As a guy who came to the US as a young buck crushing the game, what’s it like now to be the older guy driving the van with a bunch of young guns killing it in Europe?
Oh, it’s rad. Any chance I get to go to Spain to rip is obviously good, but just seeing these younger guys going after it, it’s rad. It’s cool to be around that energy. And obviously getting after it myself wherever it fits the vibe.

Do you feel like it’s different now for European skaters trying to come up than it was when you were younger?
I feel like the competition is harder, for sure. Because at the time I was coming up not that many young dudes were coming up so it kind of made my entrance to the skateboarding world quite easy, actually. I feel like with the Internet and social media, everyone has a voice. And skateboarding’s just gotten fucking gnarly. 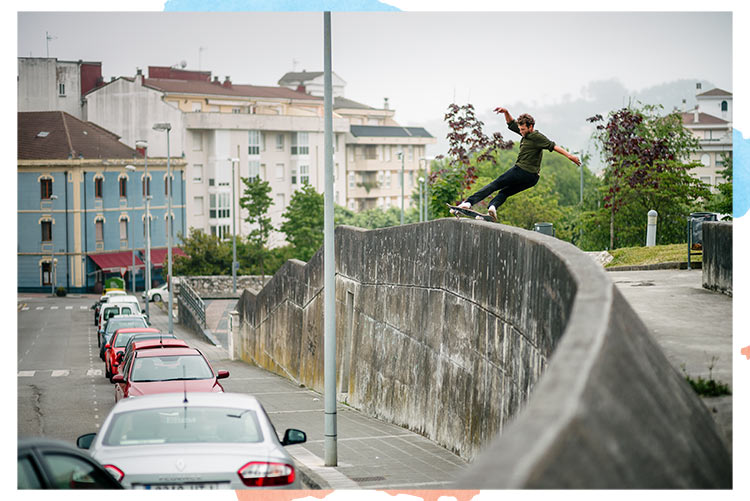 What do you think has changed for there to be so many new A-list skaters from Europe?
Well, first of all there’s more skaters than there’s ever been and then there’s the Internet which gives people a platform to get noticed. So you don’t necessarily have to live in California. It doesn’t hurt, though. But now it’s changing. There are board companies from Europe, you know? It’s spread out. The world’s getting smaller.

That’s true. I was impressed with how you handled Knox’s sprained-ankle situation. It seemed like you’d done it many times before. Is that just from personal experience?
Well, yeah. I’ve been through it myself so many times that I’m just, like, “Fuckin’ sit down; put some ice on it; there’s no reason to panic. You’re not going to accomplish anything by panicking. Just chill out, get right to the hospital and check it out; see what’s wrong with it and go home.” There’s no reason to hold up the rest of the posse or have him sit in the van or make him wait or whatever. 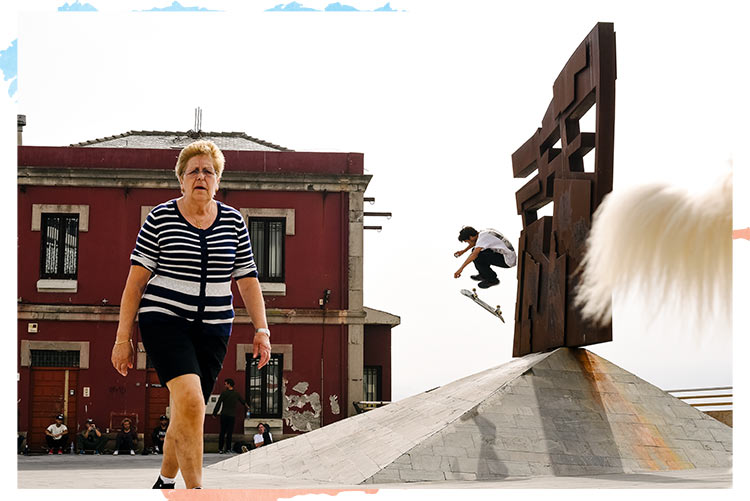 Crust crusader Tom Knox snuck in a 360 flip between a lady and her dog before his ankle decided it was time to return to London     Photo: MEHRING

Well, I think in that situation it could be perceived as that. Just because you definitely had the most know-how.
I guess I can come off as a little pushy and sometimes even an asshole because I’ve been on so many fuckin’ trips. I’ve wasted a lot of time myself with drinking, smoking and being a pile and just wasting away time, money and resources. And I’m not drinking now so it’s, like, what do I do on a trip? I try to make it as efficient and fun as possible and just get after it. So I really don’t have tolerance for just fucking off anymore. But on the New Balance trip everyone’s fuckin’ down. Everyone’s skating 24-7.

What was it like being on a trip where you didn’t have to shoot photos?
It was rad. This was the first trip I’ve been on in a long time where I didn’t bring my whole arsenal of gear. I just brought a shit ton of different boards and my Leica, which is nice. I was kind of scared; I’m not gonna lie. It was, like, “Okay, I brought this board box; this is serious. I have a box of boards.” But I enjoyed it.

Are you mostly skating or shooting these days?
It’s probably about half and half. I’ve been skating a lot of pools and transition stuff. But the last couple of years that I’ve been going on trips, I’ve been the photographer on the trip. So I’d shoot the photos first and then worry about the skating after. This New Balance trip was refreshing because it was, like, “Alright, I’m fully skating on this trip.”

So back to the South crew, what do you think they were doing while we were out there killing it?
They were probably just sipping Mai Tais and fuckin’ hanging out at the beach. Judging by Instagram, they had their feet kicked up on some fucking holiday beach vibe. I don’t know. I guess we’ll see when this article comes out. To the North! No—I saw some gold. There were some rad photos. There were a couple of early missions where Tom K went out and got some sick shit and PJ was ripping. I think everyone on the trip got some sick photos so by the looks of it I think it will be a good one. 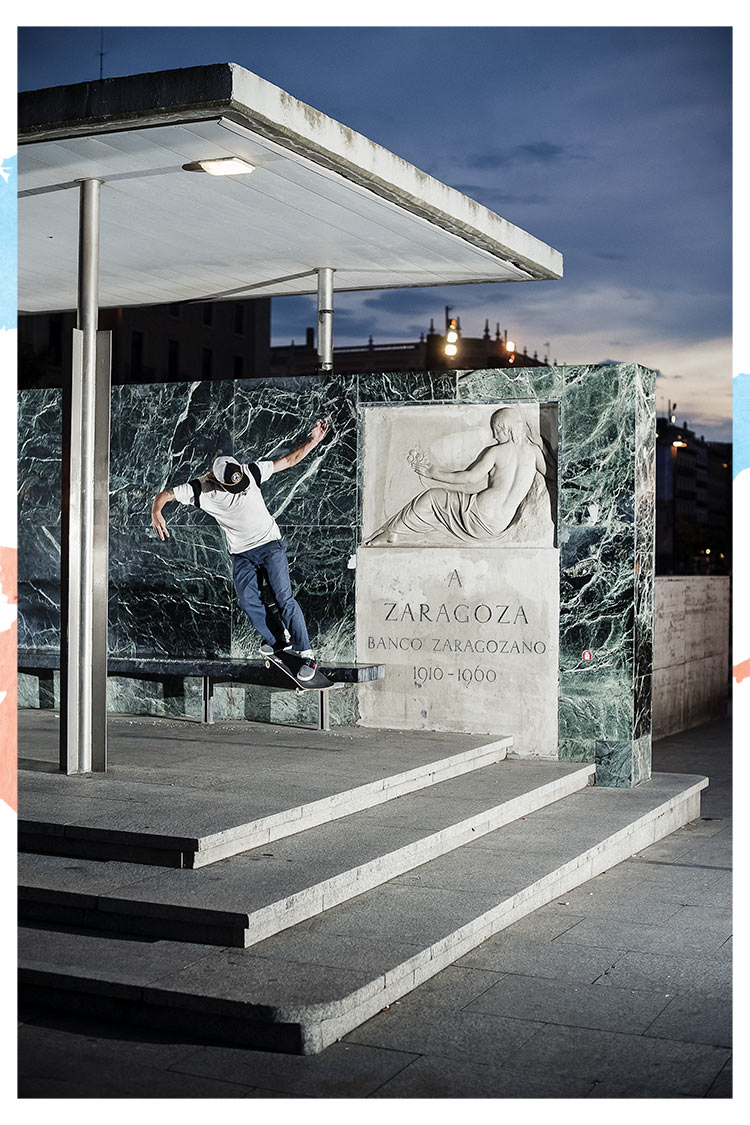 Axel Cruysberghs, back Smith pop out to high five with a concrete babe    Photo: PIRES 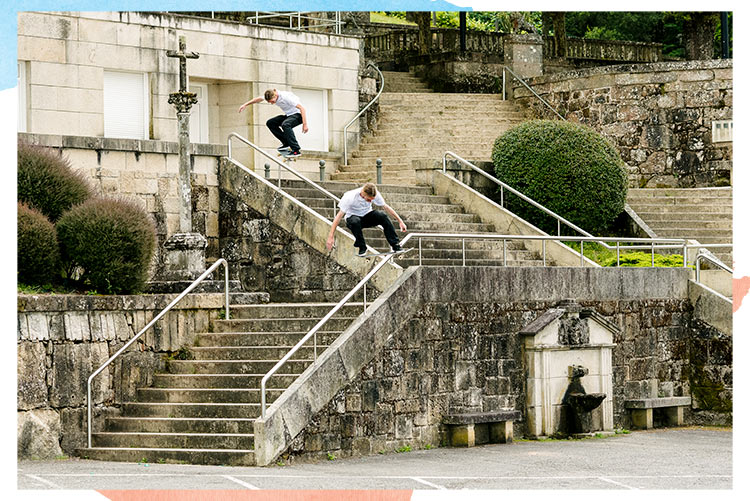 Deathwish indeed! Jake Hayes came from Down Under to get up and over. Ollie to quick 180 before breakfast    Photo: MEHRING

The King of Lyon, Flo Mirtain brought a backside 180 flip fakie manual along for the trip and, luckily, he remembered to unpack it. That tenth frame says it all    Sequence: PIRES 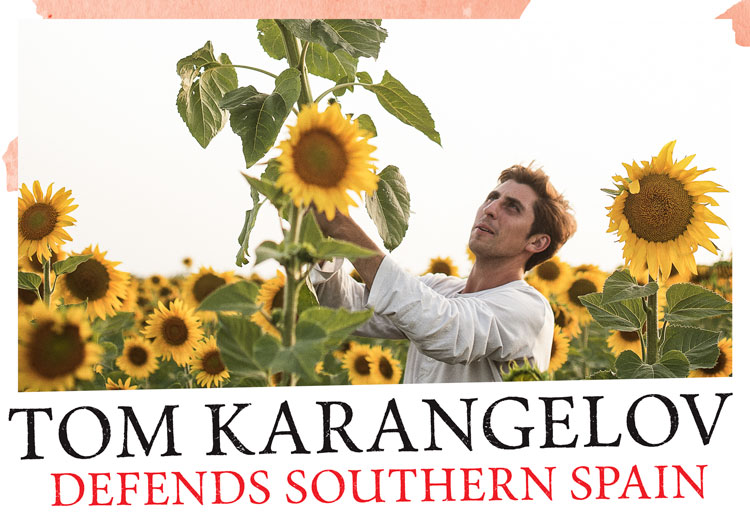 Arto said that the guys who were on the Southern trip were on a beach holiday. He said you were just sitting in the sand with your feet up drinking Mai Tai’s and piña coladas. Is that true?
Yeah, it was pretty much a vacation. We just had fun every day while those dudes stressed out.

Why were they so stressed?
Because when you have Arto with you on a trip it gets stressful. Our side, we kind of treated it like a vacation, but we skated a bunch. We would skate all day, get back at a reasonable time, go eat dinner and hang out and then figure out what to do the next day. I think the guys on the North trip had to drive really far to stay at their Airbnbs while we had the luxury of staying close to the cities we were in. So we could go to the beach in the morning or come back early and have dinner and they had to run around a lot. We were by the water, too, so it kind of felt like a vacation.

Were you happy with the decision to split the team up into two groups?
Yeah, I was really happy because there were so many people and we got to skate more by splitting up. But it was still pretty hectic.

Did you secretly wish that you were with the North guys?
No way. I was stoked where I was. 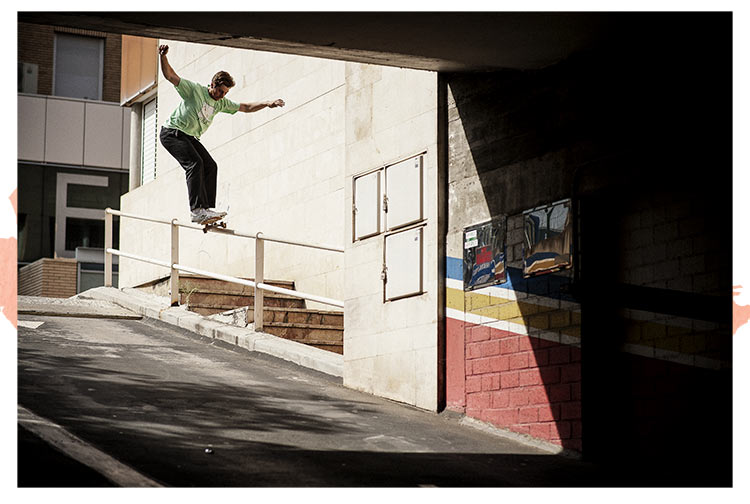 Hey, rail knobs, you can suck it too! Tom bangs out a quick 50-50 before hitting the beach     Photo: PIRES

The battle cry of the other crew was “To the North!” Did you guys have a mantra?
No, we didn’t because we’re not jocks. We’re just skate rats.

Do you think the guys that went to Northern Spain didn’t get to mess around as much because Arto was skate coaching them?
Yeah, definitely. He can kind of be intense, but it’s just because he wants to see people rip.

Only a mind like Marius’ would dream up this lip to fakie. You crazy, man     Sequence: MEHRING

If you could have picked one dude from the North to join the South posse who would you have chosen?
I’d probably pick Arto because I’ve skated with him a lot outside of this trip so I feel like he might not been as gnarly on our side because he would have Russell [Houghten] and me and we’d just kind of chill. I’d pick him just because it’d be fun and funny and he’s a good time. He’s good to have around.

Who was the MVP of the South crew?
Probably Tyler Surrey. He’s, like, the best skater ever. He surprises you every trip with something. He’s just got it. Whatever he wants to do—I feel like if he chips away long enough or really cares he could do it. It’s pretty crazy to be around that kind of skateboarder.

What are your parting words for the Northern Spain dudes?
Suck it. 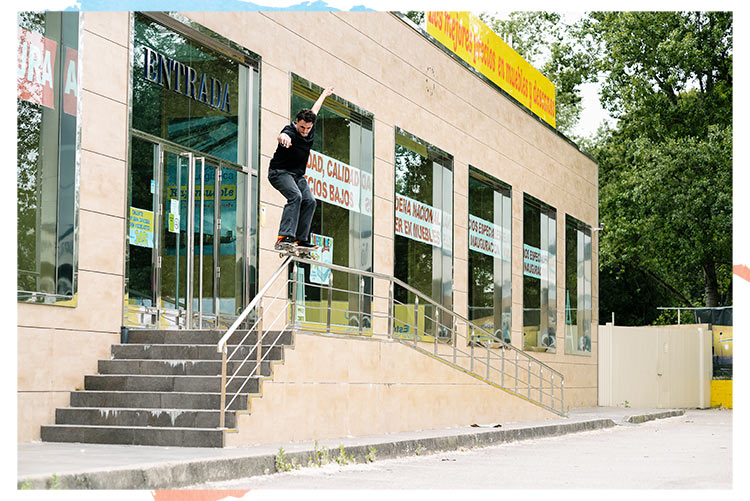 He scored the cover of the mag in ‘07 and in ‘16 he’s still killing everything in sight. Anthony Schultz, 50-50 across and down    Photo: MEHRING 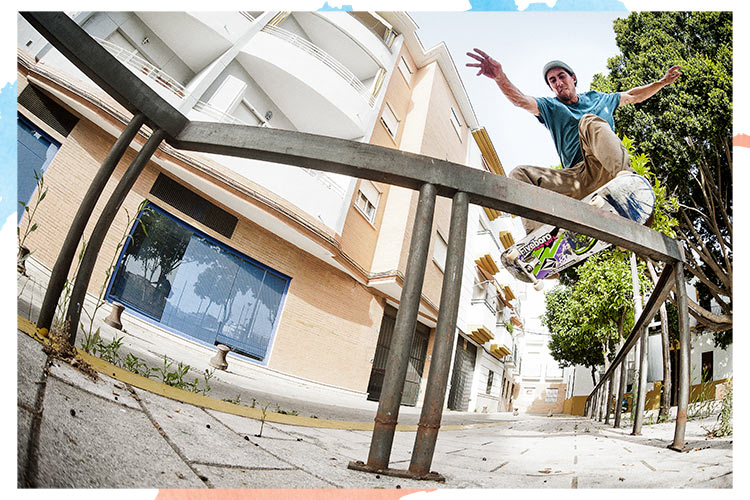 Jordan Trahan: swamp rat, super good. Ollie over to tailslide for all the Boros     Photo: PIRES 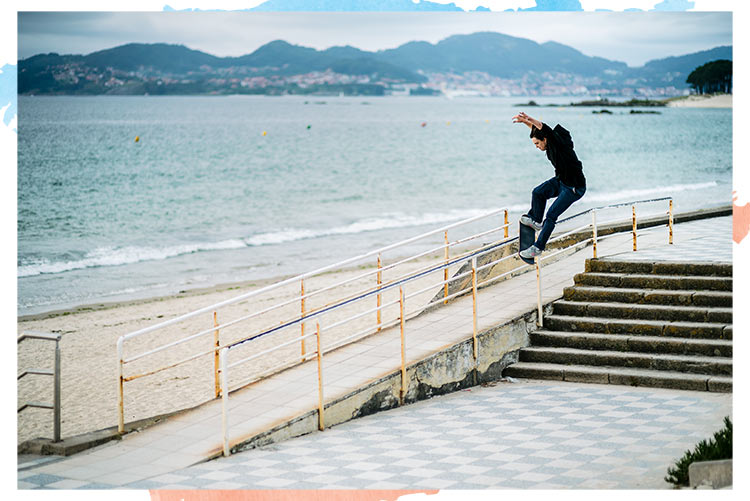 Known for his unique approach to spots, Jordan Taylor isn’t afraid to jump on the big bars when that’s the only option. Smith pop out to kick off the weekend. Advantage: North!     Photo: MEHRING 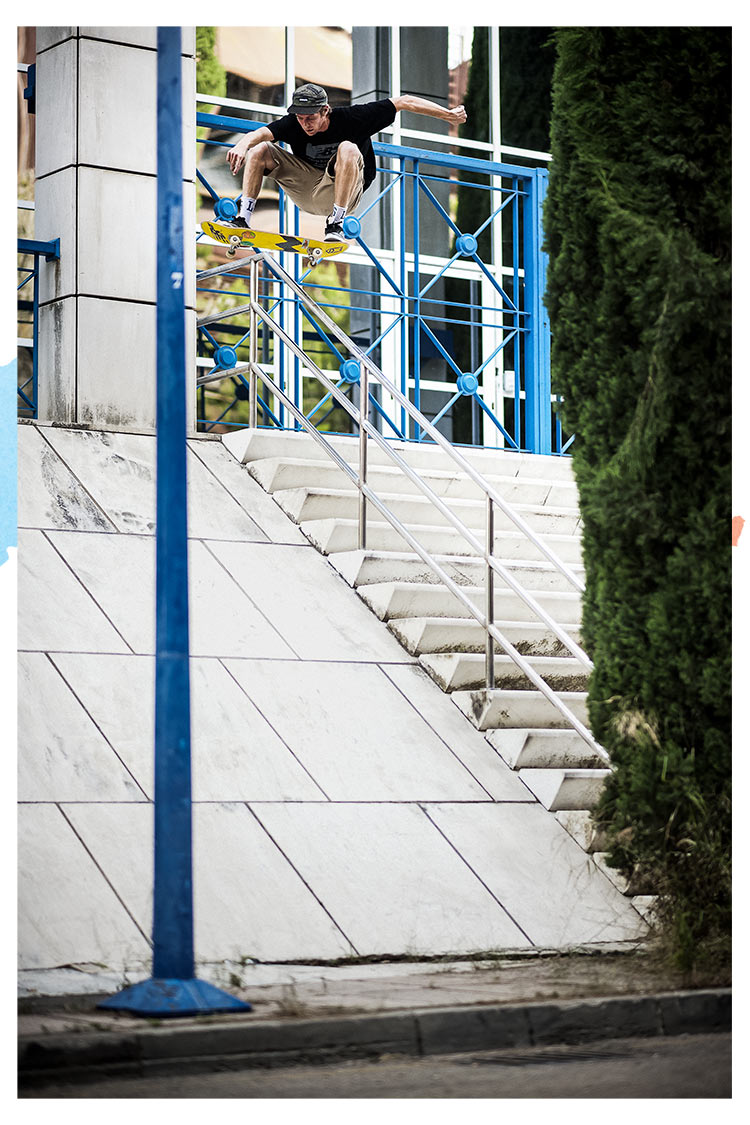 Back on the board after a knee injury, Tyler Surrey was hyped and ready to shred. The MVP of the South 180’d this rail into a steep slope without missing a beat     Photo: PIRES