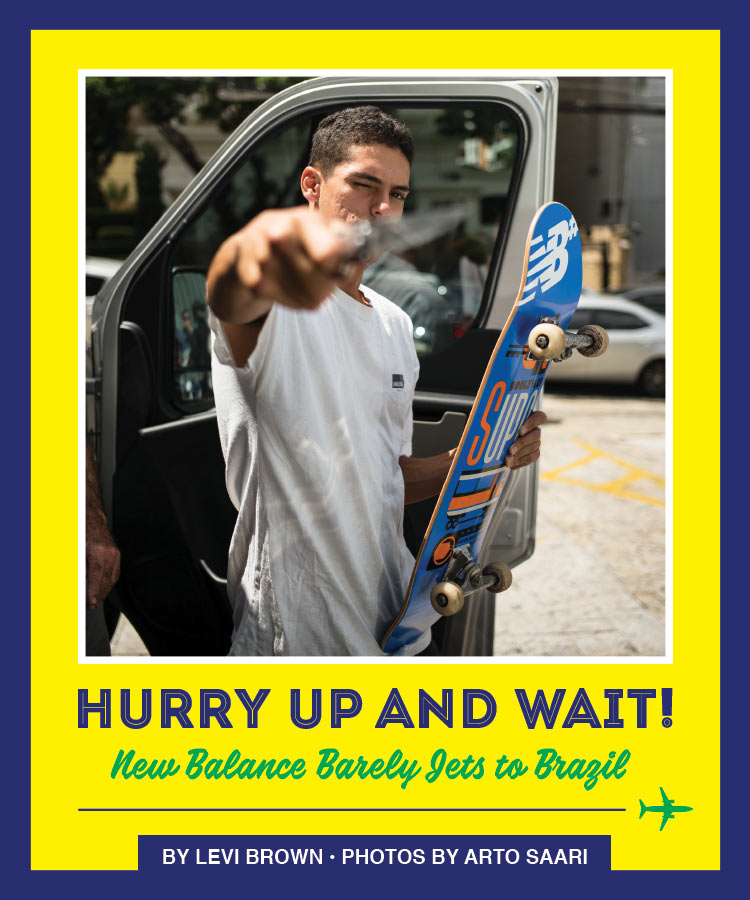 "Yes, be ready to roll out. I’ll keep you posted,” I said as I hung up.  The team was packed and ready for our trip to Brazil. The only problem was we were still waiting for our damn passports and visas to show up! How could I have overlooked such a crucial component? With expedited travel documents “on their way,” I had to resign myself to the fact that we might very well not be making our flight. I looked at my phone. Only four hours until we take off. I busied myself by nervously packing the rest of my things. 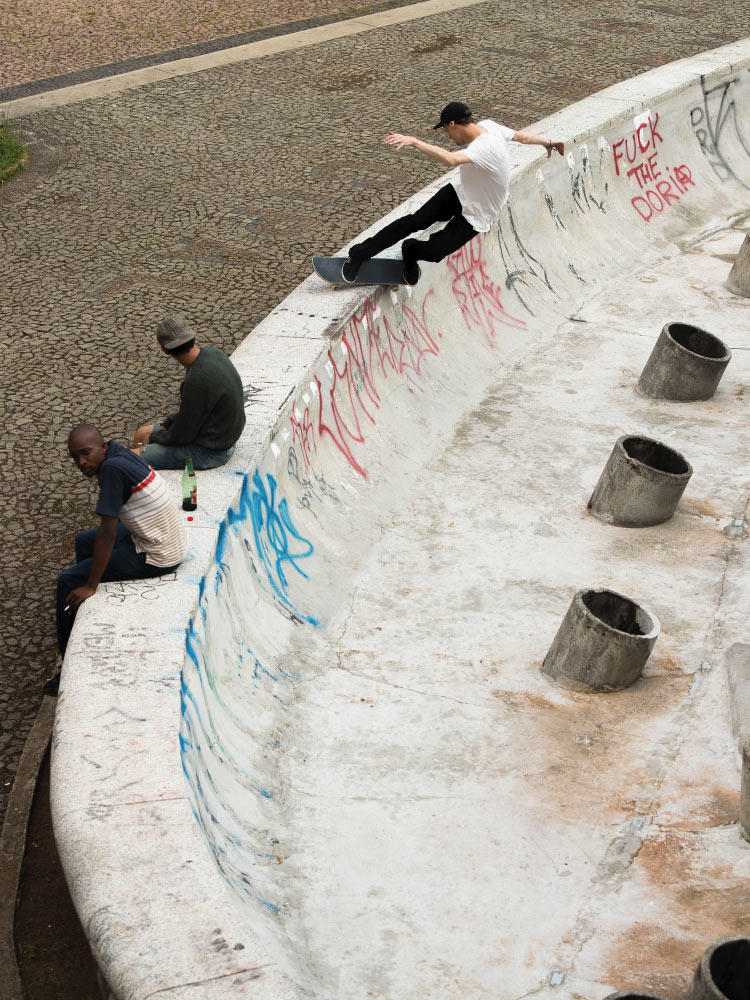 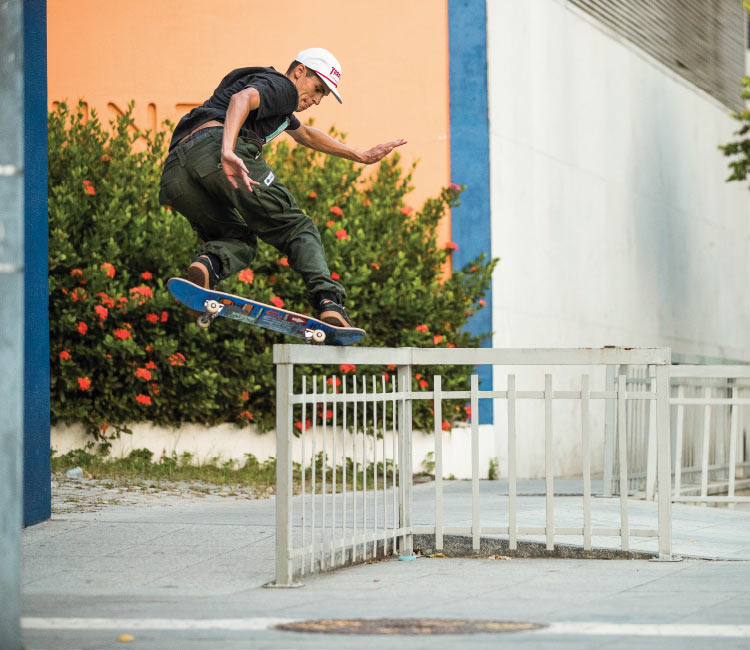 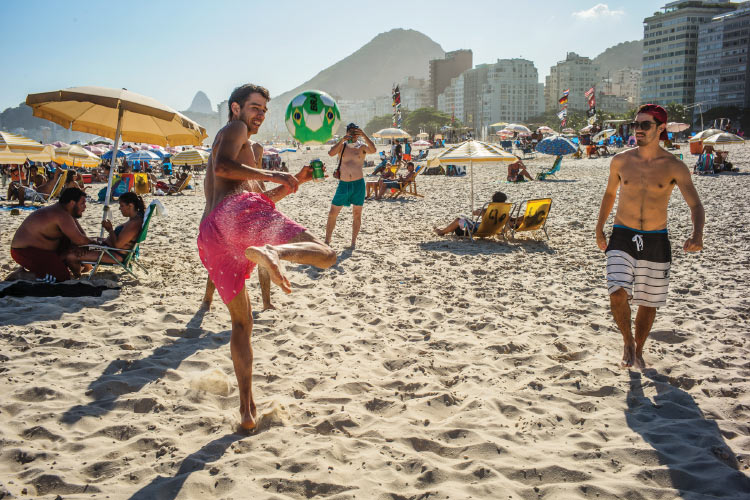 Franky and Flo had met me at the NB office in Long Beach. Franky didn’t seem worried. He just sat on the floor next to his luggage drawing some kind of Pokémon on his griptape. Phone check: three hours until we leave. We’re screwed. I pulled up Russell Houghton’s number, ready to break the bad news. I put my phone back in my pocket. I’ll give it five more minutes. Ten minutes later I’m about to call the whole thing off—and then I heard it: knock, knock, knock. I sprinted to the front of the building, squinting as I opened the door. There stood the postman, haloed by the afternoon sun, passports and visas in hand. Jesus! Why do I cut everything so close?!

Flying into Brazil, Sao Paulo’s shaky skyscraper’s extended across the hazy horizon. One would need a lifetime to explore all of its crust. Thankfully, our newest riders Pedro Biagio and JP Souza are both from Brazil and were on the ground waiting for us. Added bonus, JP speaks fluent English, so he quickly became the go-to guy for everything. “JP, can you order me an acai? JP, is it called a Caipirinha? JP, where’s the crapper?” He loved it. If you ever meet JP, ask him about his rap career as JPinga. 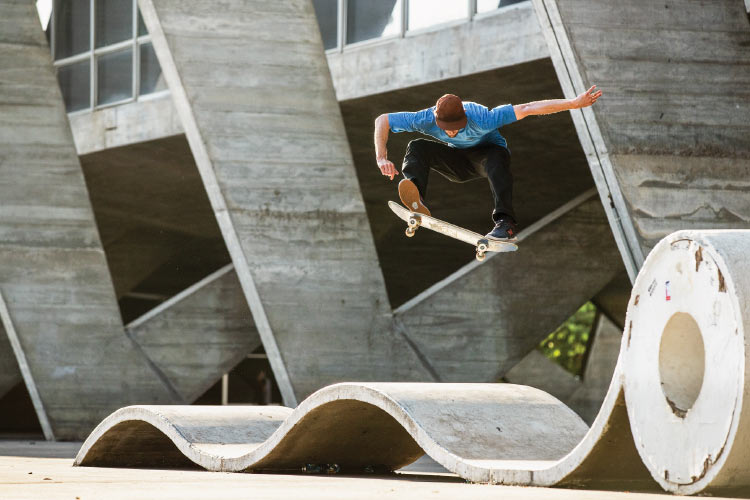 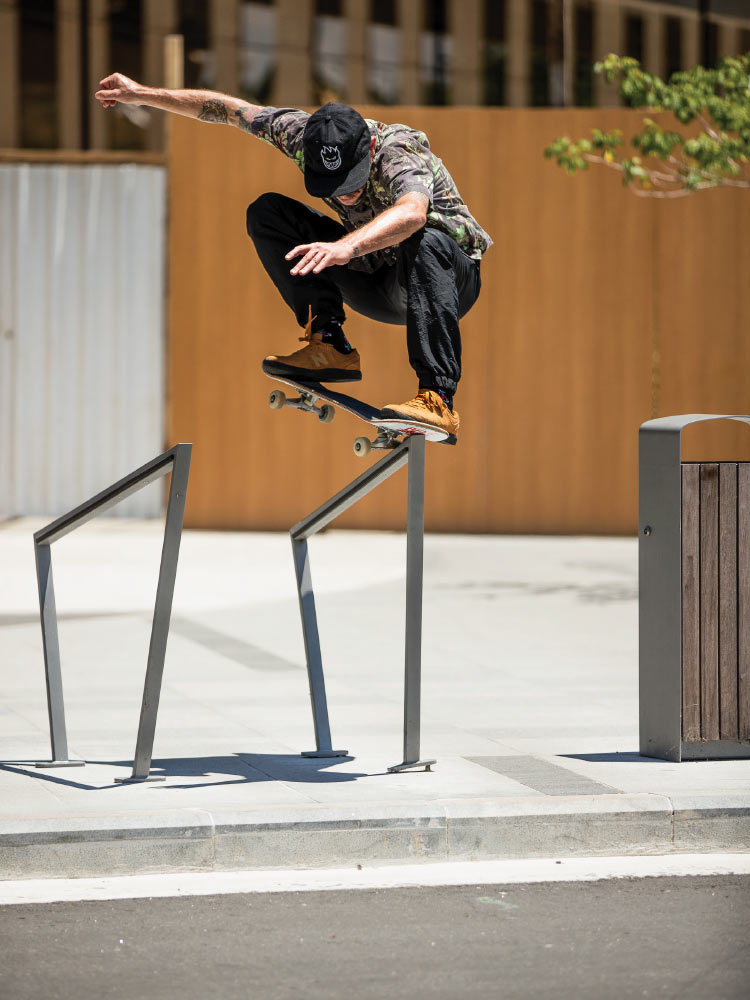 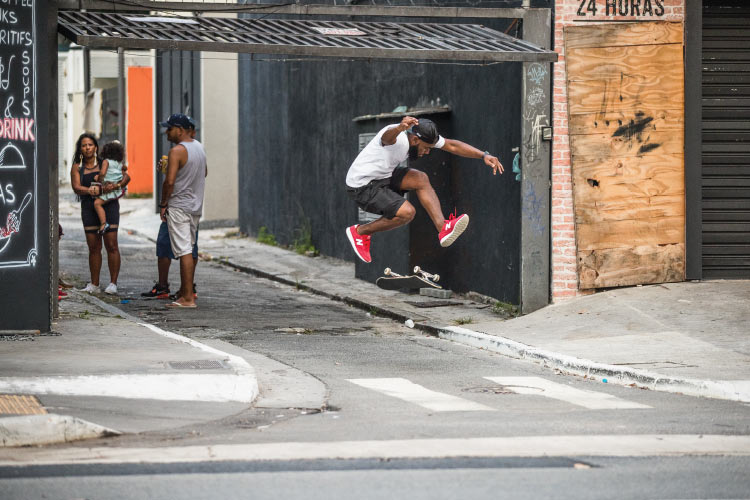 Arto came along as the photographer so that meant the food spots needed to be often and on point. Proper acai in the morning was a guarantee, but nothing made him happier than going big for dinner and eating at a Churrascharia. The heat of the day seemed to evaporate and his eyes would light up at the sight of the feast. Churracharias are restaurants where waiters walk around with skewers of succulent meat, just waiting for the nod to load up your plate. The flood of food never stopped and it was the first time I’d seen Arto throw in the towel. Even SOTYs have their limits. 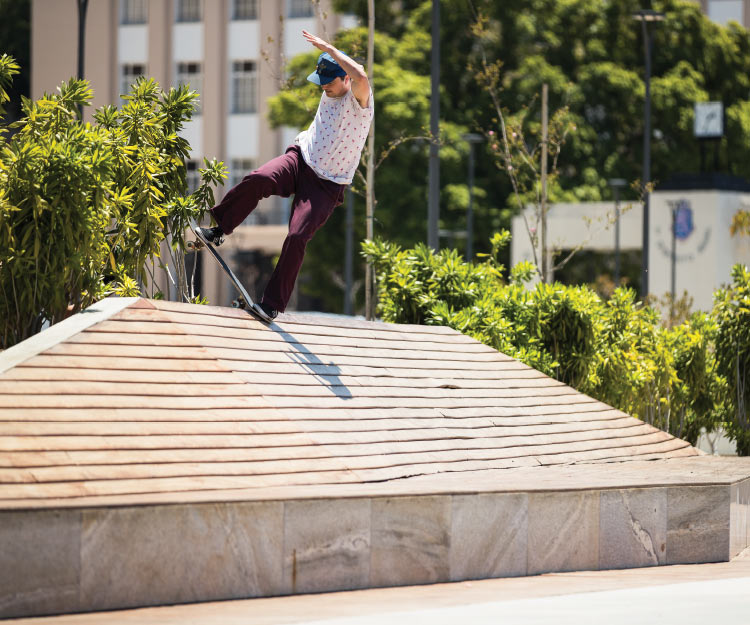 Putting you in a trance with a purple-pants dance. Jordan Taylor, nose blunt slide 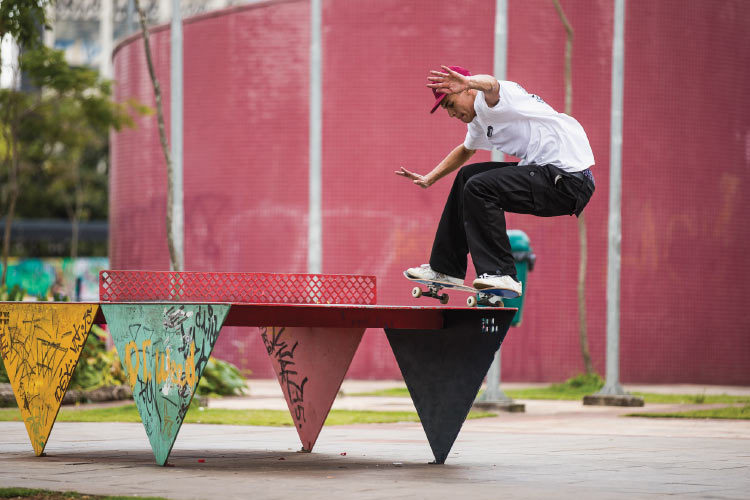 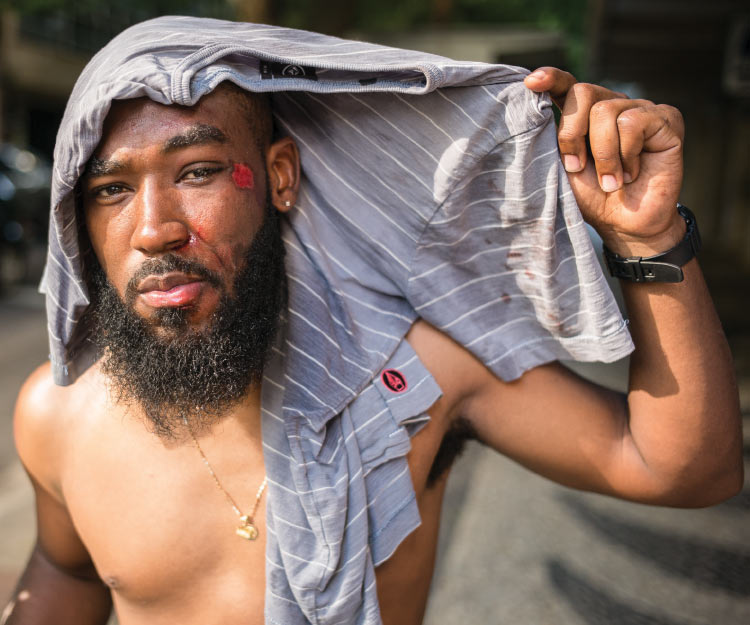 We split our trip between São Paulo and Rio de Janeiro, where the Olympics had recently poured marble across the city. Minus the visa/passport fiasco, the trip had gone really smoothly. On the second to last day, however, disaster struck. We were checking out a tall, straight out rail that had a nice run-up but a shitty cobblestone landing. Marquise was still feeling good from his birthday celebration the night before and jumped on it immediately, quickly landing a switch crooks but hitting a parked car on the roll away. He needed that clean exit, so he ran back up the stairs and threw down with speed and confidence. Unfortunately, this time his wheel landed in a gaping crack and he got tossed face first into the car’s bumper. He was knocked out cold with blood pooling around his face. Everybody froze, waiting for him to move. Fifteen very long seconds later, he rolled slowly out from under the vehicle, clearly in need of stitches. We all turned to JP. “Yo, JPinga! Where’s the nearest hospital?!” 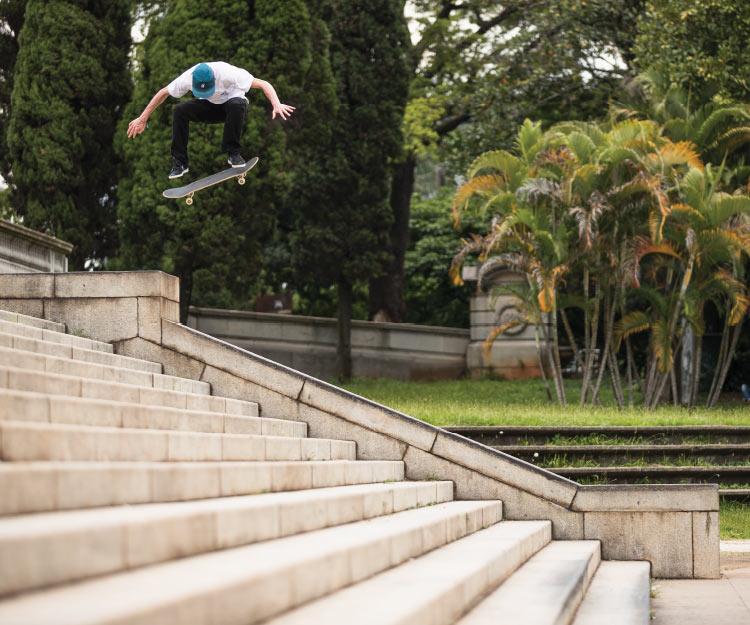 The kids at this park were lighting off M-80s but Flo’s fakie flip blew up the spot. Tchau tchau, Brazil