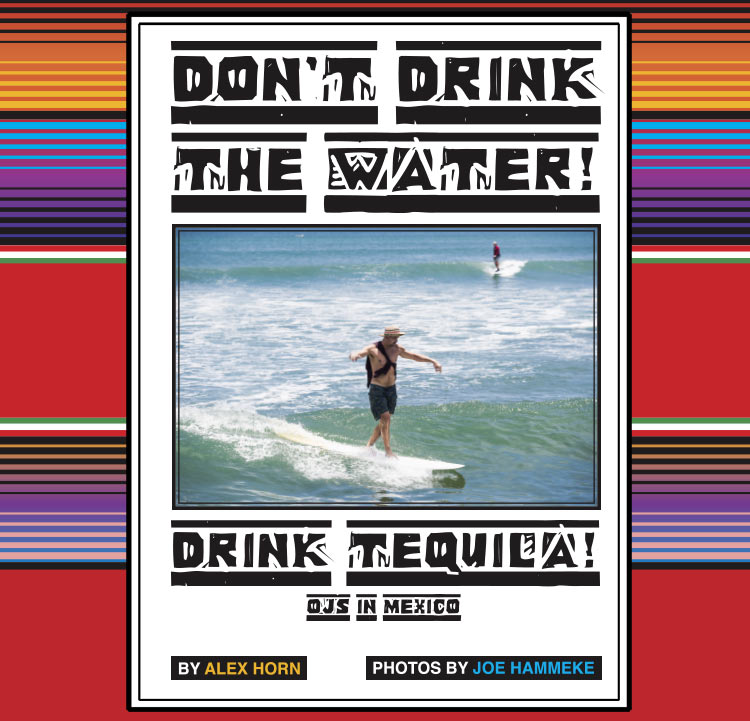 Here we go again! The OJ’s crew headed back down to mainland Mexico for our bi-yearly tequila/shrimp quesadilla fest that we lovingly refer to as “a skate trip.” A fair amount of heavy shredding went down in a short period of time in Guadalajara, León and Punta Mita. All terrain was blazed, raccoons were handfed dinner, small, perfect waves were ridden all the way to the beach, LSD was ingested and used to its maximum potential and unforgettable times were had by all (and then promptly forgotten). 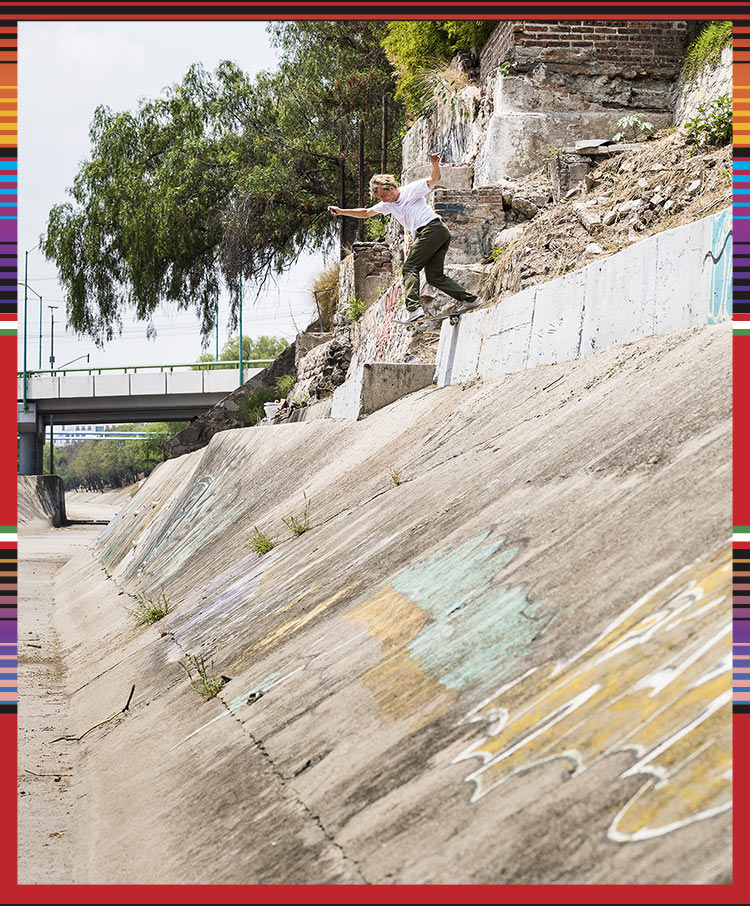 This ditch basically runs the entire length of León and is littered with skateable spots. Here's The Governor (Marius) doing what he does best: governing over a very crusty backside tailslide 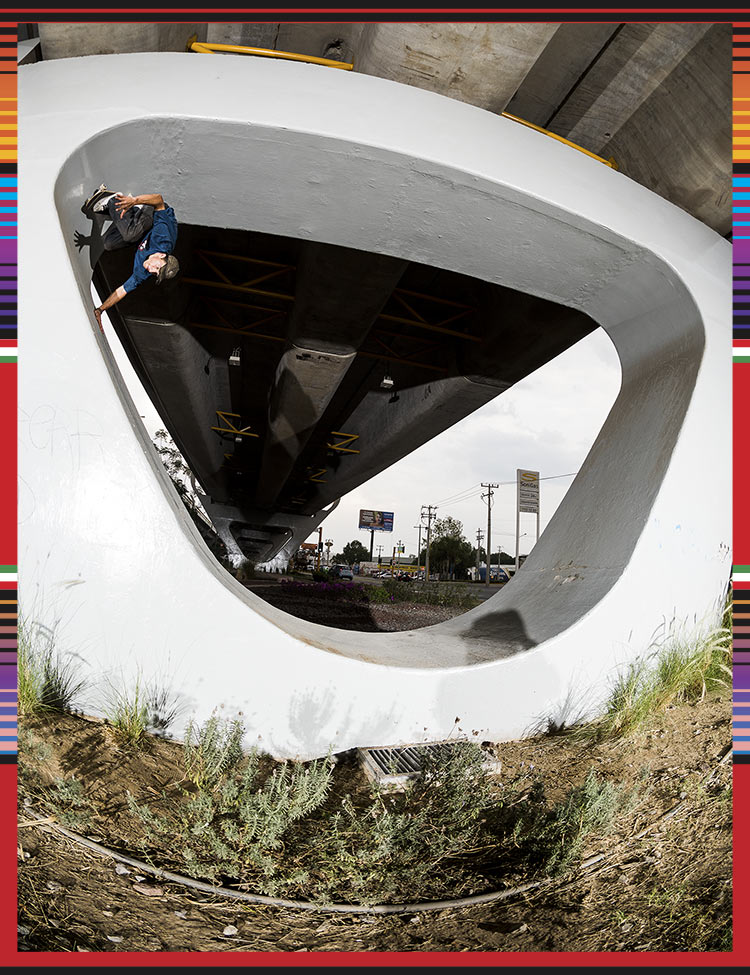 In case you hadn't noticed, Erick Winkowski likes to plant his hands and go upside down whenever possible. Kickstand powerturn at 11 o'clock. Totally tubular, bro!

So much bitchin’ shit happened on this trip that this article could easily be 500 pages long, but I’ll try to keep it nice and tight. Emilio Fernandez is our good friend and fellow OJ team rider and his family owns the best surf camp in Mexico. And as if that weren’t enough, they own a really rad skatepark to boot. This is one of the reasons why the OJ crew has been frequenting this area so heavily for the past five-to-six years. Emilio and I struck out from Puerto Vallarta and drove to Guadalajara to scoop up the crew. 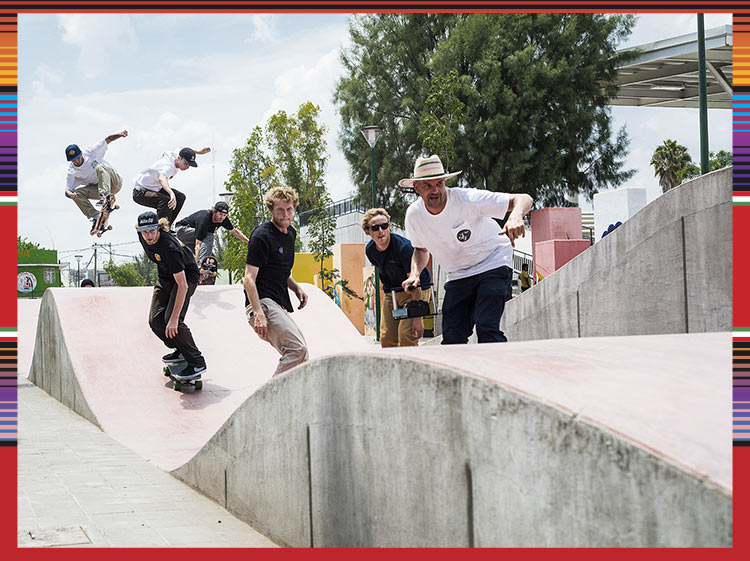 This spot was gnarly! It had at least seven feet of vert, a bumpy surface and no real way to hit it without a tow-in. In true Erick style, he decided to just start from the top. Stand-still backside roll-in to grow a baby's head on your hip. 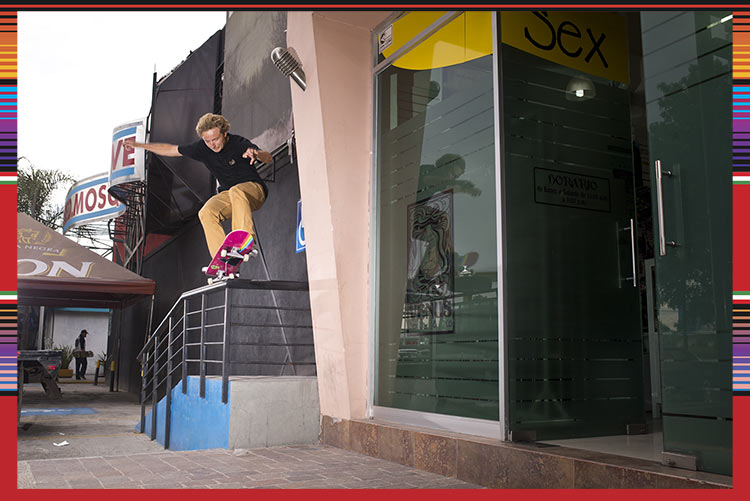 Marius Syvannen, 5-0 at the sex shop bump to bar

With immediate deliveries of brown bags (decipher however you want), we ran amok in GDL for the first few days and then smashed out to the land of 1,000 skate spots: León. The crew crushed the concrete red wave, Erick took a slam on a backside roll-in of doom that would’ve hospitalized me for the rest of my life, Cody went to the moon at the Pop Strike ditch, Duffy somehow knocked himself out during an acoustic solo guitar jam, Wes was as krusty as ever and killed it—everybody got something in León. Then we got the fuck outta there and b-lined it back to da beach, boi! 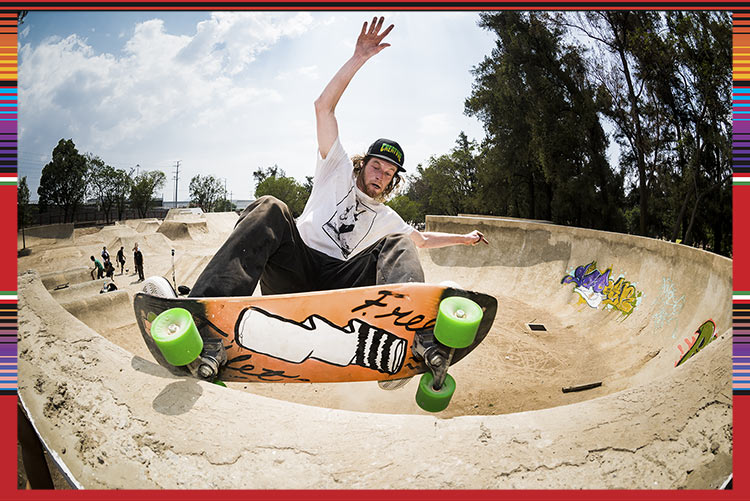 Willis Kimbel will pancake your mindsack when you watch him ride. Some 75mm Hot Juice whells helped him mash through this dirt BMX track to rear-axle crush 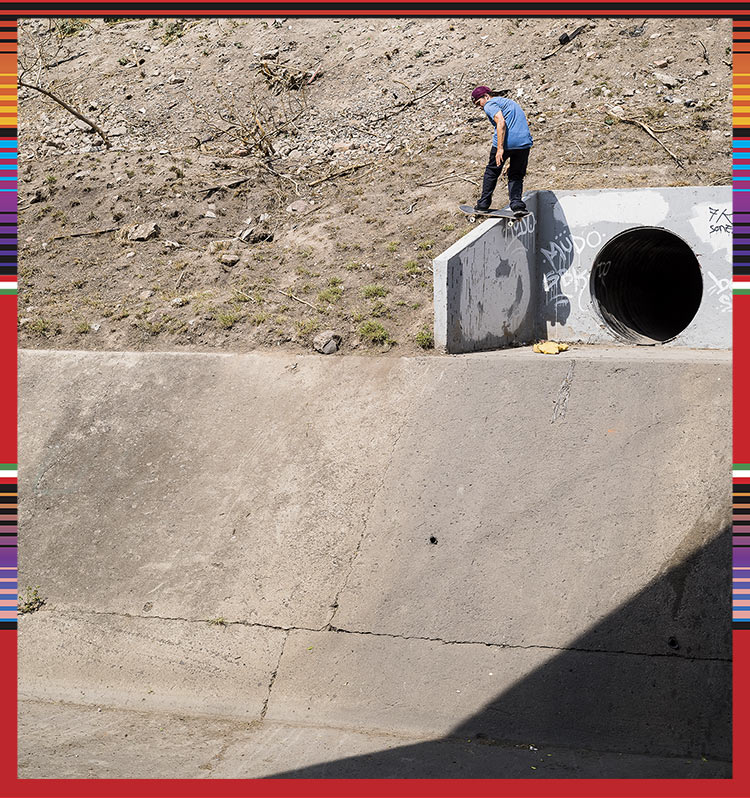 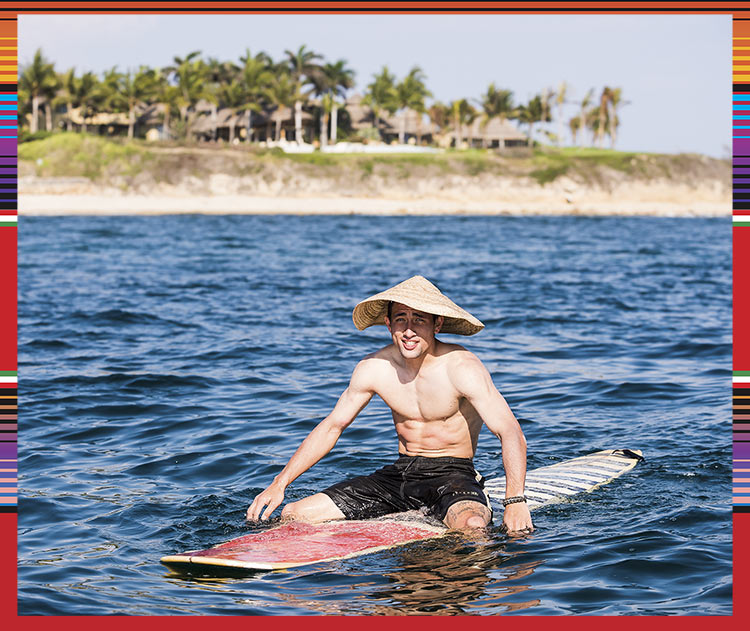 Winkowski eyes an opportunity to get tubed. 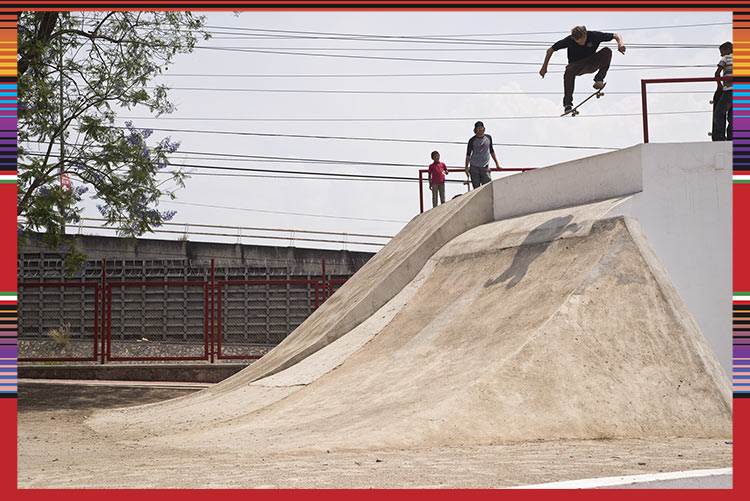 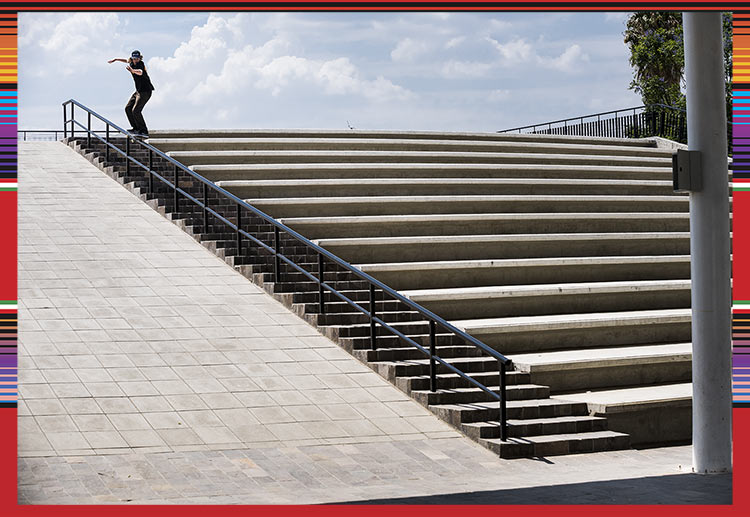 Poor Willis. Poor, poor Willis. He grinded the shit of this rail, came off of the very end and then bailed. Then he grinded half of it and transferred into the bank so I still bought him a nice bottle of tequila

The last few days of our trip were filled with lobster, good waves, ditch shredding and an all-night skate jam at Emilio’s skatepark fueled by clean blotter and margaritas from the restaurant next door. We all made it out of this one relatively unscathed, sunburned or bronzed, all over-lobstered and ready to be returning stateside. Gracias to the Fernandez family and Accion Tropical Punta de Mita for all the hospitality, boat rides, fresh ceviche and for always having our backs in Mexico. Hasta la proxima, cabrones! Ánimo! 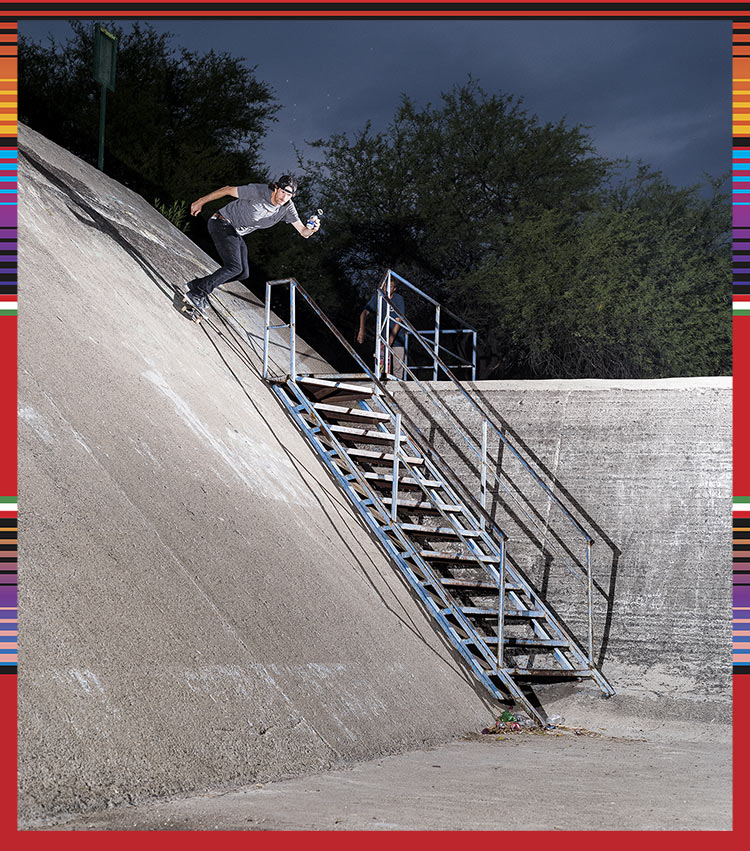 Duffy made it through this beer-run carve unscathed but got taken out by a guitar solo. Weird shit happens south of the border 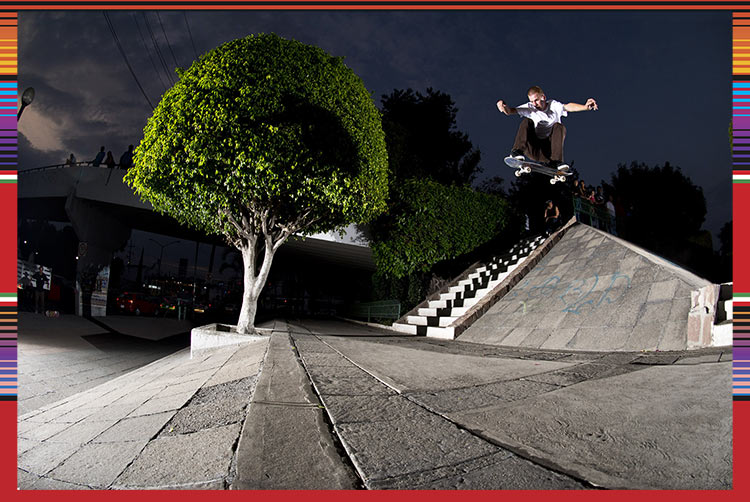 After a long day we rolled over to a park to drink a few beers, Cody Chapman spotted this hip to gap and despite it being pretty dark and the busy street at the bottom he managed to blast this transfer 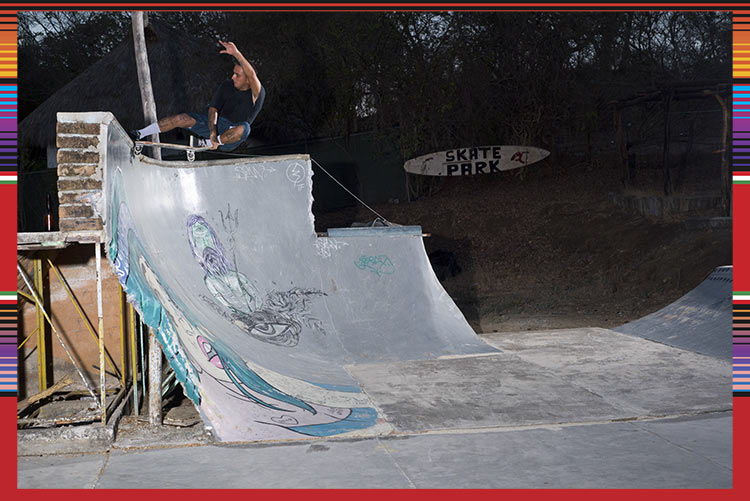 The last few days were spent on the beach by day and at Emilio Fernandez's backyard DIY at night. 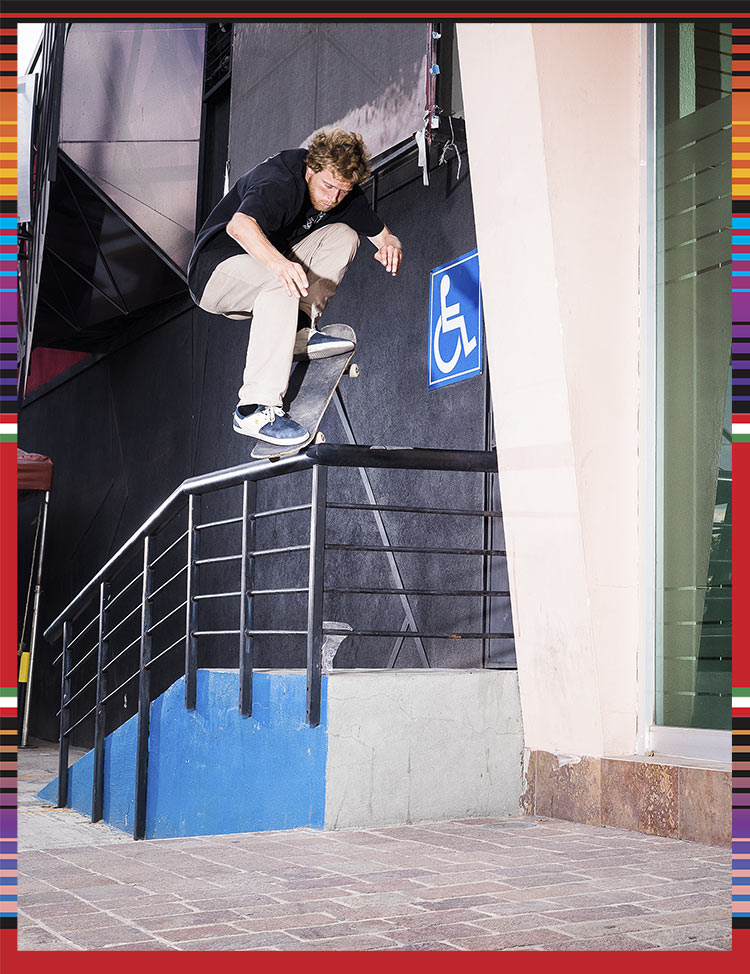 While the crew was kicking back chugging cervezas and scarfing down ceviche, Wes was in the streets serving up crooked grind transfers 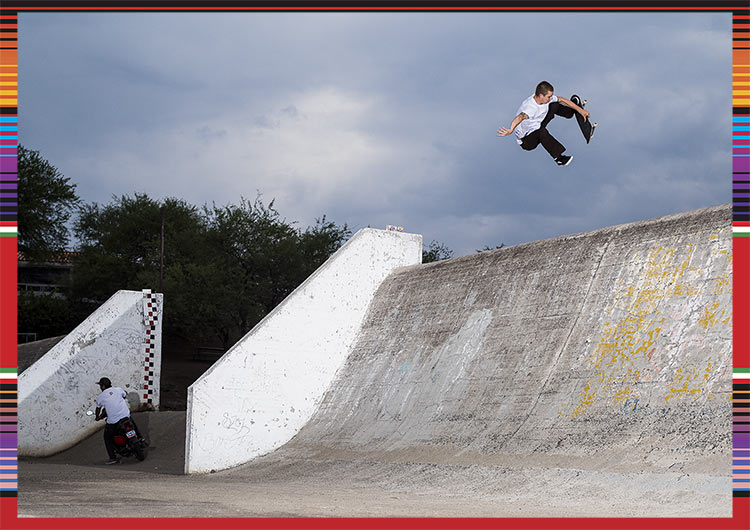 Cody Chapman was getting towed into this amazing spot in León but the cops showed up and threatened us with jail time if we continued with our scooter shenanigans. Not one to quit so easy, Cody pushed through the glass shards and pebbles to blast this boneless one. Adios amigos!