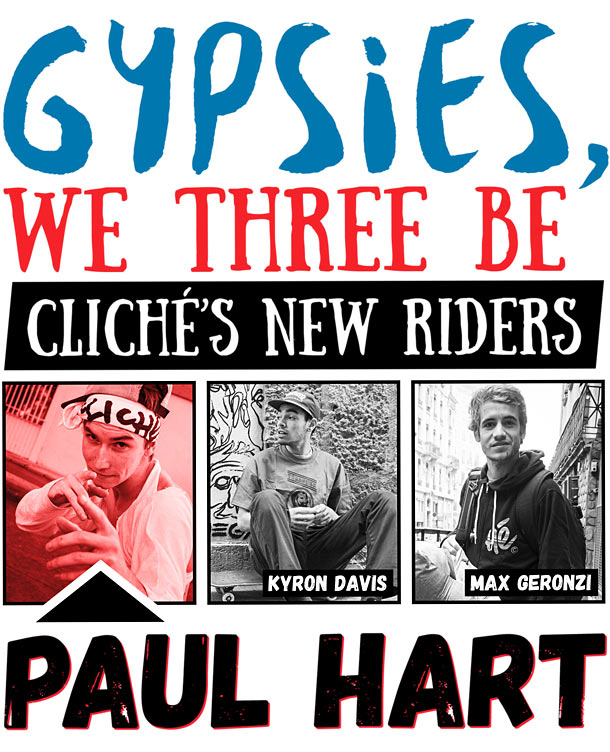 Why does your Instagram say “100-percent American” when you’re obviously Canadian?
Oh, man. I changed that a long time ago. I don’t know. I just like America and what we are all about!

Why do people think you’re Canadian then? You think it’s something in the face?
Oh fuck. Here we go.

You’ve heard this one before?
I honesty don’t know. Maybe because I’m white as shit? Because I’m extra pale? Or maybe it’s because I wear a hat all the time? I don’t know. It’s stupid.  The McClungs started that rumor as a joke.

They started the rumor?! Those guys look Canadian as fuck!
They were just trying to save themselves, I think! Fuck them! They are the most Canadian-looking Orange County bros! But I’m actually from Jacksonville, Florida. It’s the furthest thing from Canada that exists. 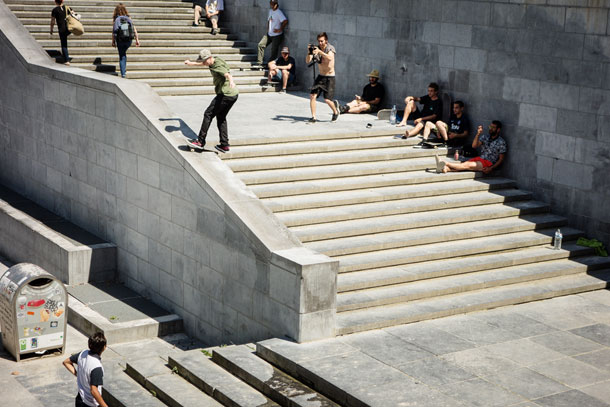 You’re from Jacksonville? What the fuck did you do growing up in Jacksonville, besides skate?
Some of my friends build monster trucks. Let’s leave it at that!

Were there skaters there that you looked up to as a kid?
Definitely: Joey and Ryan Corey, Matt Fink and Mike Peterson. They taught me everything—not to be a dick dog and just kept me in line. Real-ass people.

Everyone needs those people, right?
Yeah, for sure. Everyone needs someone to keep them from getting a big head or just show them how to act. They fucking held it down.

So you had positive role models. Maybe that’s why everyone thinks you’re Canadian. Not enough tattoos!
No tattoos. They were really positive people in my life. They didn’t do drugs so I didn’t have that stuff around me growing up. They didn’t even allow me to cuss! They cussed but they wouldn’t let me because I was so young. 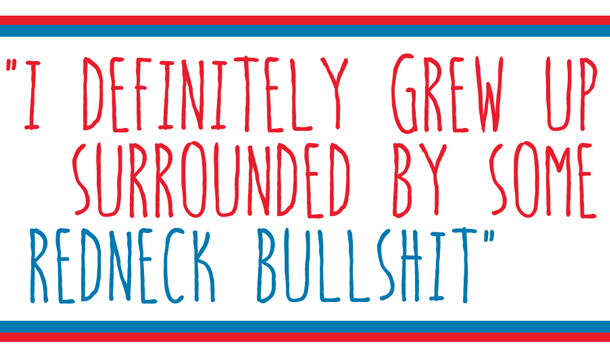 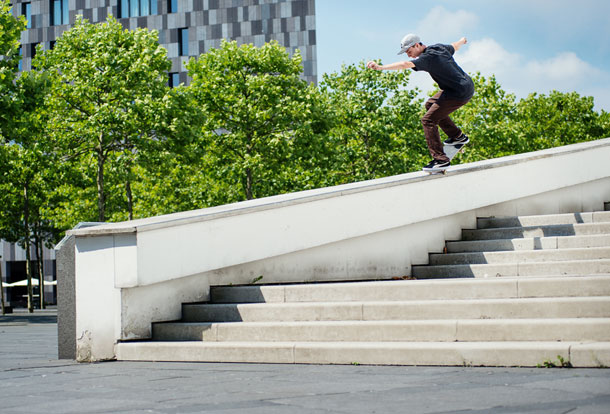 Were they kind of like older brothers to you?
My actual brother was an addict. I don’t want to say they took his place at all because he’s my brother, but they were there for me when I needed them, for sure.

How’s your brother doing now?
I don’t really get to see him a lot. He went to rehab and now he’s living in Florida working on a yacht as a first mate. He’s been killin it, though, making good money and he has something he likes to do. It’s a blessing that I got my bro back. He’s finally got his head on right after many years of ups and downs. He’s a rad dude. He was the one that got me into skating when I was growing up.

So how does a dude from Jacksonville end up on one of skateboarding’s most culturally-diverse board brands? Florida isn’t exactly known for its ability to get along with different cultures.
Yeah, that’s pretty funny. I don’t know, man. I guess it was just meant to be. I definitely grew up surrounded by some redneck bullshit! Now I’m on some European-ass shit, and I’m just some white-bread Canadian Floridian! I have no clue. It’s pretty funny.

How did it happen? It wasn’t just totally random.
I dropped out of school in tenth grade. I’m not advising to do that, but it’s what I did. Then I just came to California. My mom and dad were okay with it.

You just said, “Fuck it. I’m done. I’m going to do this!”
Yeah, that’s what I did. I moved out and just went skating. You know how it goes. You meet people out skating and you don’t act like a weirdo. You just skate. I met Joey Brezinski and he helped me out with the Cliché thing. It’s all been working out rad.

You ever have any culture clashes with anyone on the team? Like, do the French guys just inherently piss you off because you are 100-percent American?
No, not at all! Everyone is super tight.

When you’re on trips, do the Cliché guys always put you in a room with another American? Do they split everyone up by countries?
Yeah, they typically do. It’s not like it needs to be like that, but it’s just easier for people,  I guess.

Tell me about rooming with Joey Brezinski on your recent trip to Spain. Explain four-beer Joey.
Four-beer Joey is the best, but he’s even better with five or six in him. He’s like Mickey Mouse—a little cartoon character. A drunk Mickey Mouse. He gets frustrated sometimes when he’s filming tricks and a few beers helps calm him down. He turns into the happiest person ever: no stress, no complaining, just good laughs. 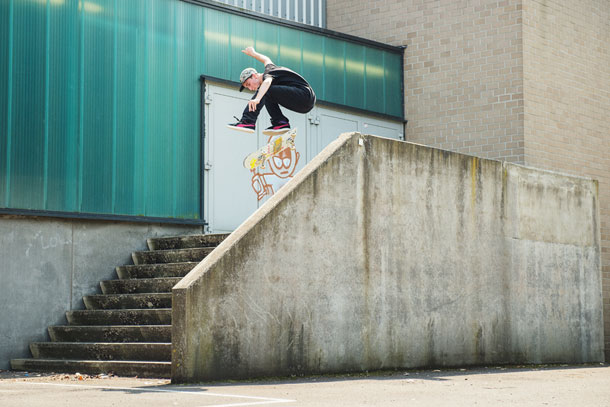 Explain the Gypsy Tour. Was that your first big trip out of the States?
Yeah, that was one of my first big trips. Dude, it’s how every trip should be. Everyone should man up and go on one. We lived off the land. We camped everywhere. We camped in the city, not in the county or anything. We would go skate all day and then when it got dark we would find a spot to camp in the city or on  the outskirts.

That sounds like being a bum.
It kind of was but it was better than that.  Like, in Amsterdam we found a halfpipe under a bridge and we just stayed there. I found a few needles but it wasn’t that bad. It was raining the whole time but it was fun.

Dude, that’s exactly what bums do.
No, well—I guess it’s urban bum camping.  It was wherever we could find a place to sleep.

What were some of the highlights for you?
Dan Z tripping on mushrooms. Dan, you are a funny fuck. 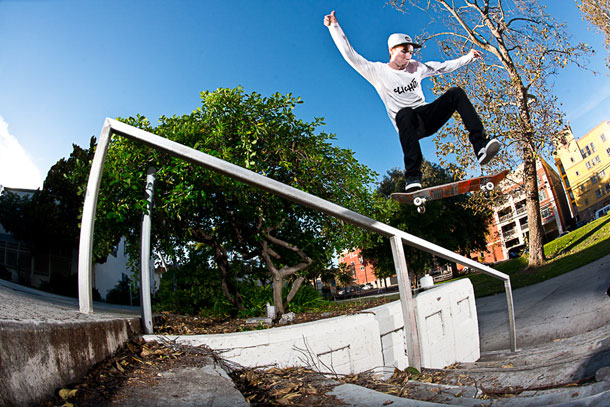 What was the hardest part of the tour?
Toilets were a problem for me. I have to shit two to three times a day, so that was pretty rough. I just had to pop a squat, but it wasn’t that hard for me because I grew up in Florida. That redneck shit is pretty normal to me.

Are there any flip tricks you can’t do? Do you have an Achilles heel?
Oh, dude, switch flips can suck it! I can do them in a game of skate if I need to, but I can’t do them down anything. I guess that’s my proof that I’m not Canadian. Canadians can  do anything.

Is it true you have your own signature sub sandwich?
Yes, I do! In Florida at a place called Sun Deli. My parents used to own a surf shop and Sun Deli was next door. They gave my dad and uncle their own sub and now it’s been passed down to me.

What’s it called?
The Heart Attack!

No fucking way. That’s amazing. You have a generational signature sub! What’s in the Heart Attack?
It’s an Italian sub with jalapenos and banana peppers. It’s just an extra-spicy Italian sub.

What were you thinking when that security guard pushed you off the rail the other day?
I wanted to piss in his face. I don’t understand how you could push someone when they are in the air—committed in the air.

How did you stop yourself from punching him in the face? Are you a fighter?
No, not really. I try to process situations before I react. I try to think it all through. If the situation calls for protecting myself I will, but I try not to fight. If fighting is the right solution for the problem then I will, but the security-guard thing wasn’t fighting stuff. I really don’t think he knew what he did. I was pissed but then after I thought about it, I think he just made a mistake. That’s why he gave me a few more tries and I got it.

If you could meet anyone, alive or dead, who would it be?
That’s heavy. Maybe a pharaoh from way back or someone like Moses. I want to get all biblical and see what actually happened! I want to meet Moses. 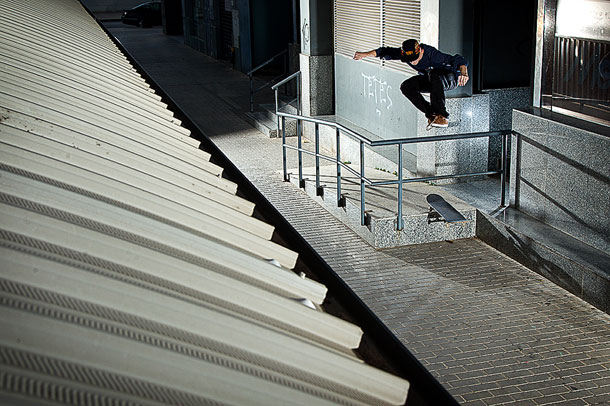 That’s a fucking good answer, man! Most people would say, “I want to smoke a joint with Hendrix or Bob,” but you just nailed it!
Yeah, I want to go back in time and figure this shit out! Get to the bottom of all this nonsense.

Tell me about FaceTime sex in public places.
Oh, man, that was in Vegas and everything that happens in Vegas stays in Vegas. I was in the back of a cab. I was with friends. It didn’t get that weird.

Wait, how is FaceTime sex in a cab with your friends not weird?
I was a bit intoxicated and we were in a cab on our way back to the hotel and—I don’t know. I was texting this girl and she was making me feel some type of way, so I decided to FaceTime her and it ended up turning into a good thing, I guess. Everyone got to see some tits and ass! Shit, even the cab driver.  He was hyped!

So do you have a full part in the Gypsy Life video?
Yes. Me and Max Geronzi and Kyron Davis all have parts. I filmed for it for about a year. 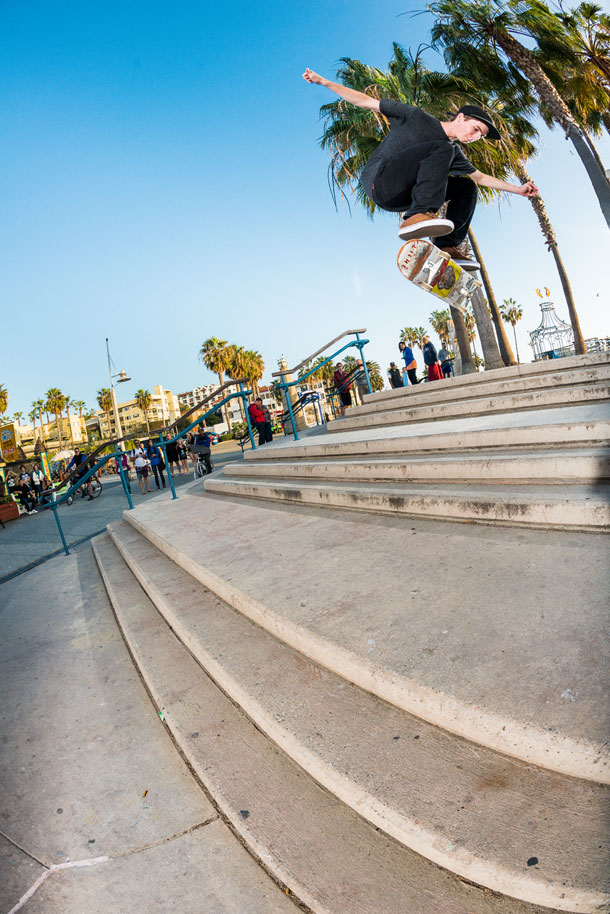 Are you excited about how things are going for you right now?
Oh, man, I’m super blessed on how things are working out. I’m hyped. I’m just happy to be skating and getting to live off of what I love to do for now. Getting to meet all kinds of really cool people is the best part. The traveling is a big part of it also. It’s been a dream-come-true type thing.