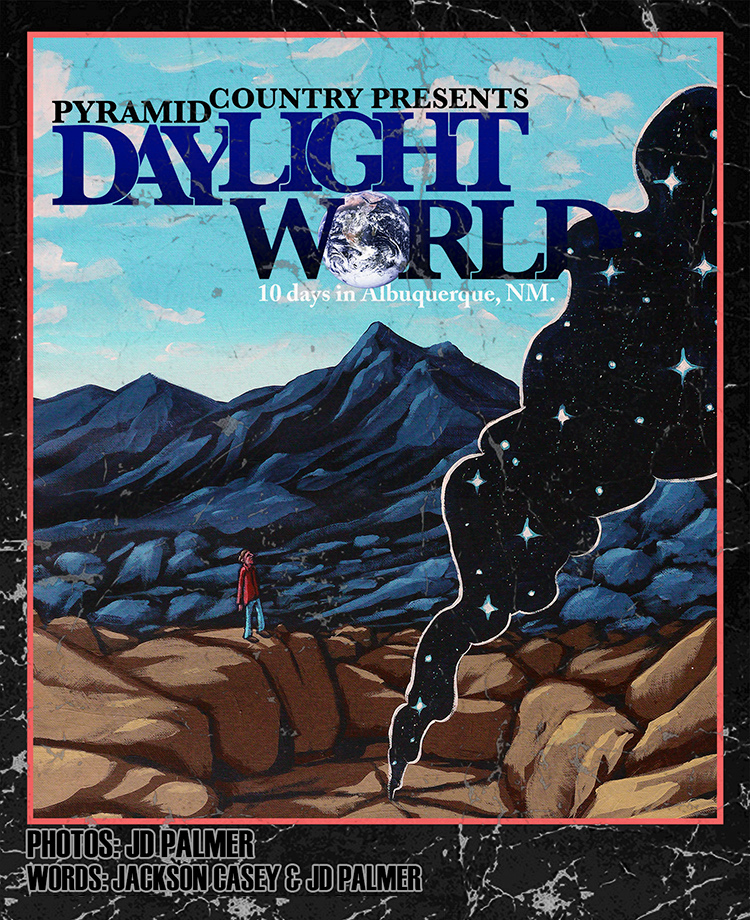 Albuquerque is unmistakably its own. A skateboarder’s wonderland, the 505 is filled to the gills with incredible skate spots, cheap and delicious food that is exclusive to this land of enchantment and a vast history full of fascinating folklore. The ’Bu is seemingly home to the brightest sun you can face in June while being in the contiguous 48 states of America. We consider it to be the sunburn capital of the world. We went through can after can of SPF100 and can after can of the sudsy adult beverage, White Claw.

This time we managed to get a house with three bathrooms. Never underestimate the power of multiple bathrooms when you’re on the road with 10-plus dudes for 10-plus days. Getting a place with multiple toilets is the best advice I can give to any group of traveling skateboarders, especially in a city that lathers more green chili on their food than we did SPF100 onto our skin. You know how those spicy foods add up—they always equal a number two.

Bugs Bunny once said, “I knew I shoulda made that left turn at Albuquerque.” Well, Bugs, we’re glad we didn’t end up elsewhere. Albuquerque was another amazing trip. 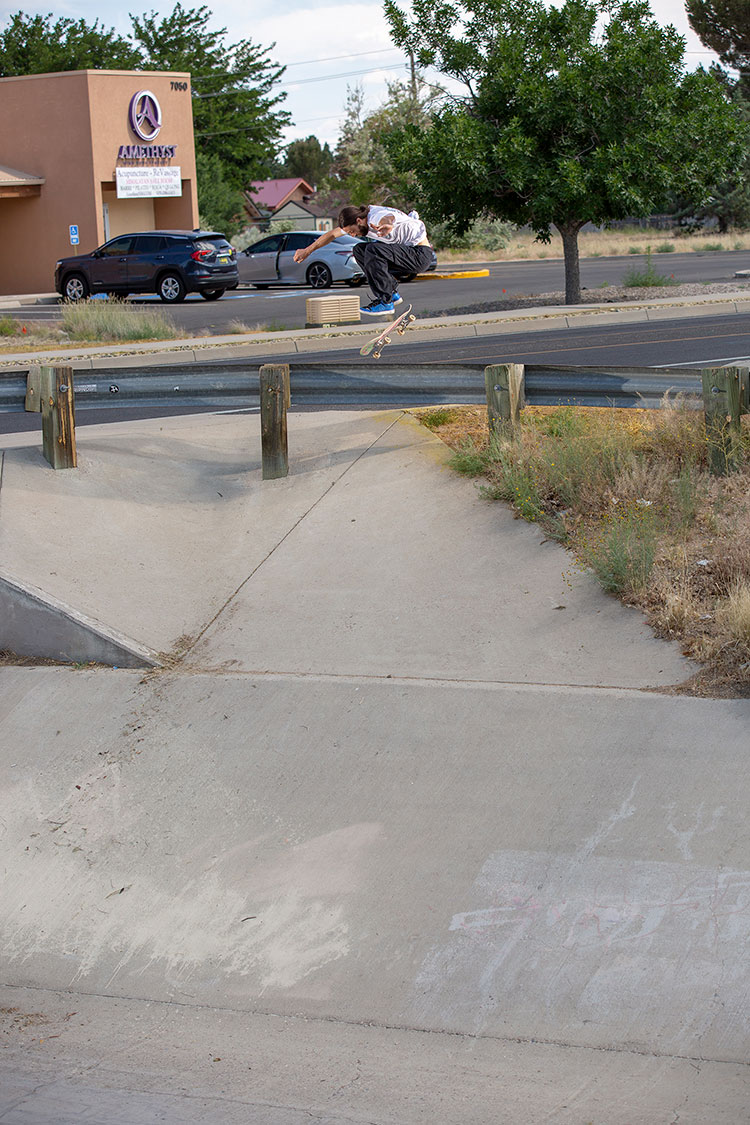 Chase Mcintyre always comes through with some serious shit like this nollie inward heelflip with such casual elegance. This double bank is no joke and many a skateboarder has fallen victim to its mid-bank speedbump. It was no problem for Chase, though. Fun fact: Dean Kubasek and Nicky Glaser filmed this clip. I had to go take an emergency dump at the Circle K up the street (told you about those green chilis) and right as I got back I witnessed this with my eyes rather than through a viewfinder, which is a rare delight for me 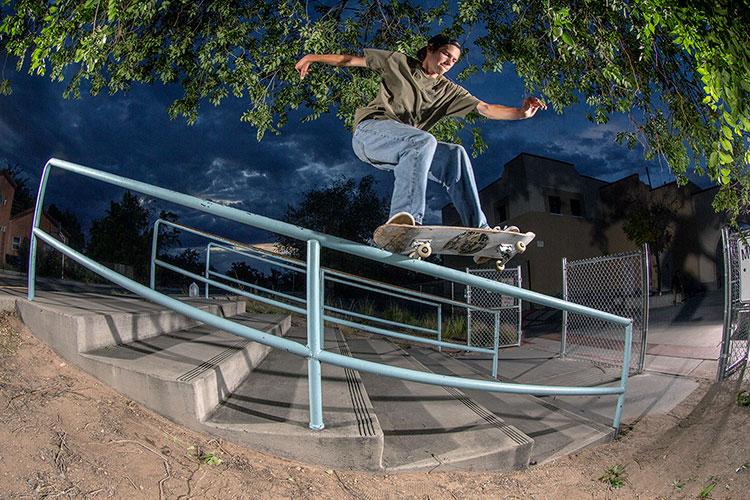 The Magnet Man said, “Magnets, engage,” and it was a wrap in no time. This rail is a perfect example of how skate-spot friendly Albuquerque is. It used to have a long kink going out from it. The school cut the kink and put up a fence but were nice enough, or dumb enough, to line the gate of the fence up with the end of the rail. Break a spot to make a spot, works for Rick Clark—5-0 to thread the needle 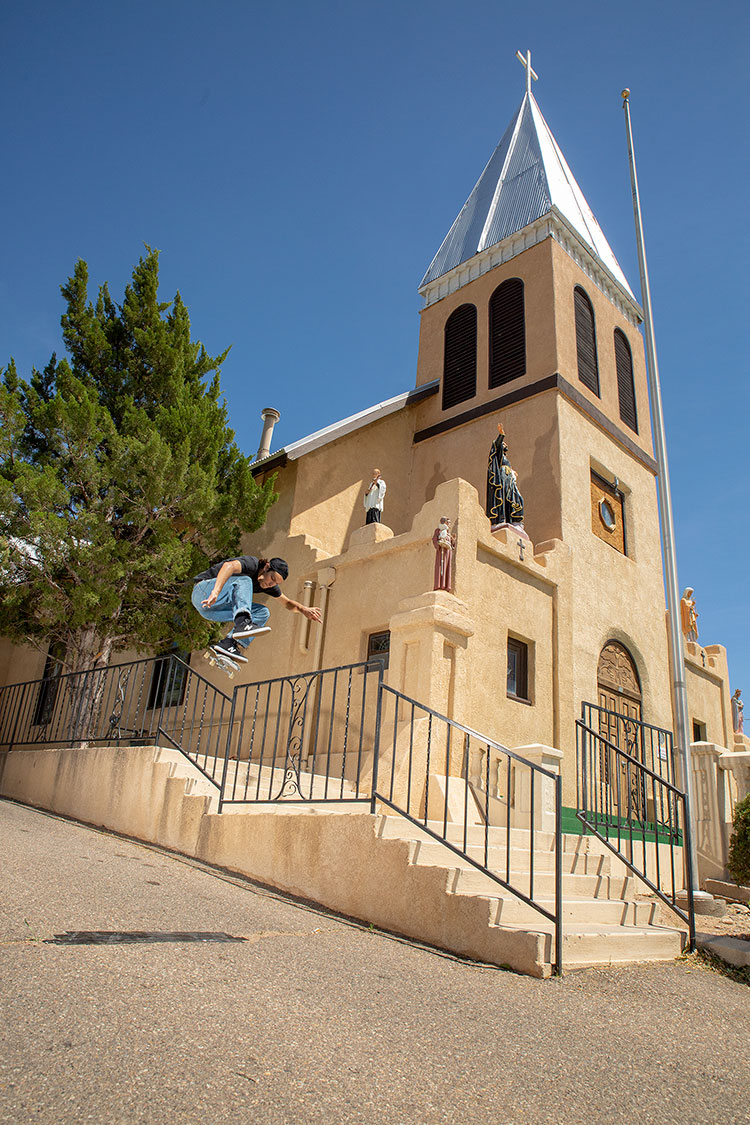 Ronnie Kessner blasted this kickflip without much trouble. This was Ronnie’s first Pyramid Country experience. You killed it, buddy! Happy to have you on the road with us. Hopefully this is just the first of many missions 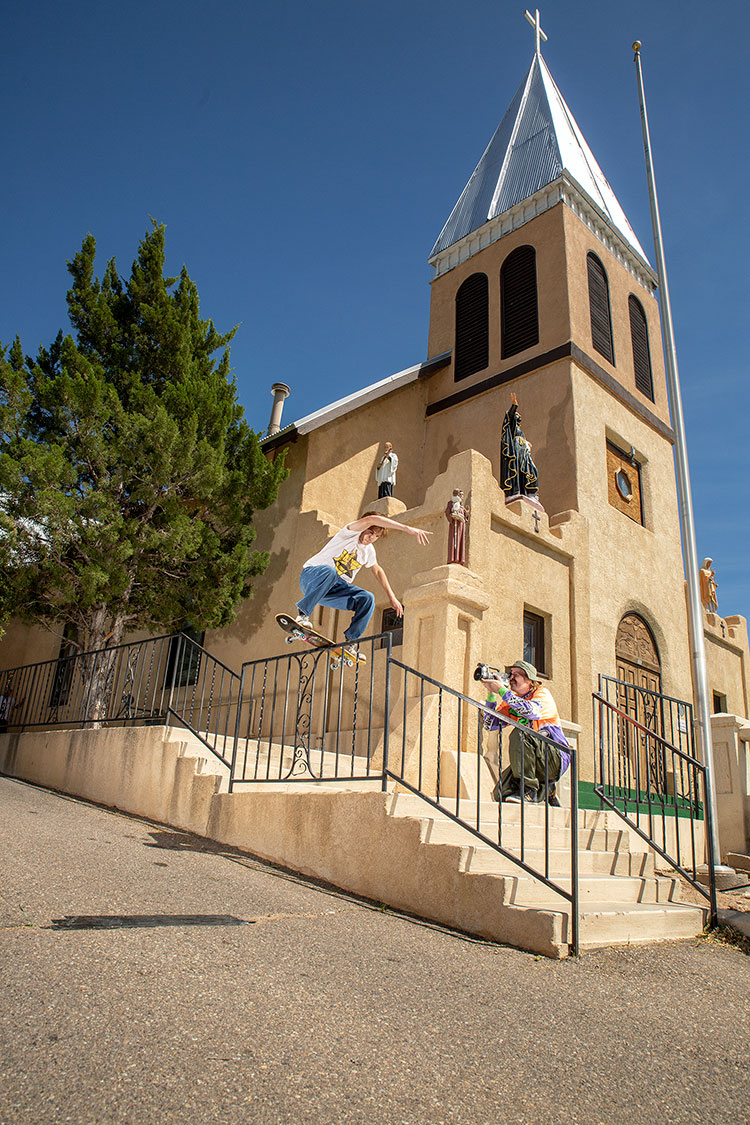 Aaron Goure took a beating for this one. It’s a tall rail to get onto, there’s a huge gap to clear (he launched over the entire down rail) and the landing is a super crusty hill. San Ignacio church is 103 years old and a staple location of Martineztown near downtown Albuquerque. We felt bad skating here but are stoked to have gotten a few things at such a beautiful place. Goure got this boardslide just in time. He rode away as the po-po rolled up on us. Thankfully they weren’t too harsh with us. They just asked us to move along 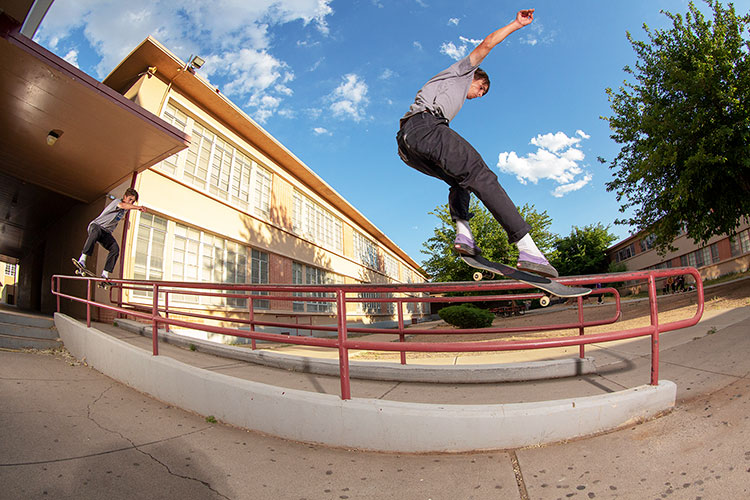 Agush Agushi is the man. JD Palmer told me about this young buck in his hometown of ABQ and said we should flow him some gear. Alright, yeah. Let’s do it. Little did I know he’d end up moving up the ranks to being fully on the squad in such a short period of time. Gush just graduated from high school and was skating full speed with the control of a veteran. Example: this boardslide to feeble on what may have been the hottest day we spent in Albuquerque. This rail’s no joke! Welcome to the family, Gush! Lay off the Big Macs, dawg! 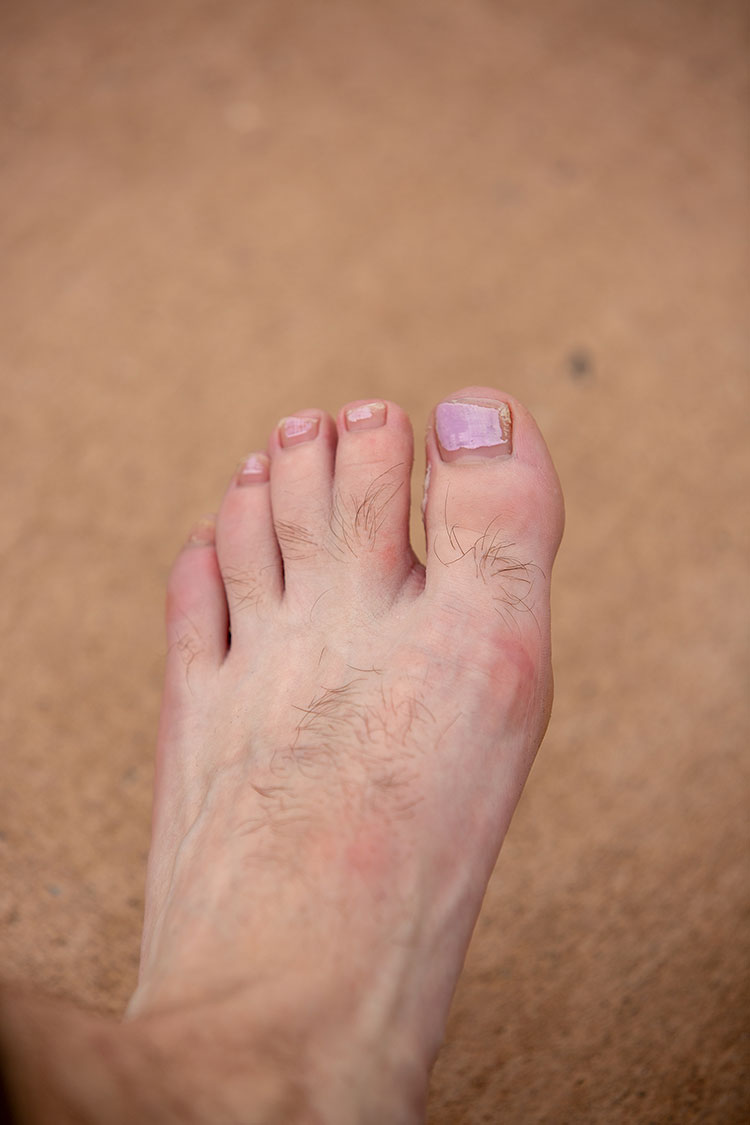 Gush has webbed toes. Wonder if it helps him skate the way he does? 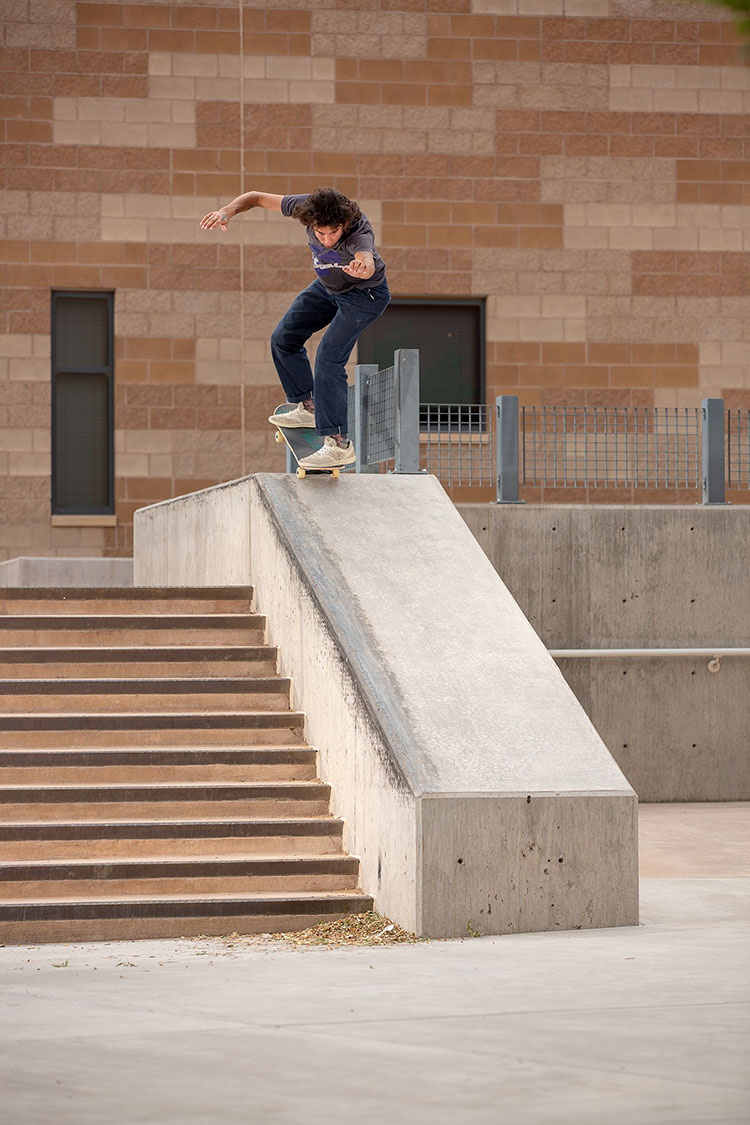 This was also Nicky Glaser’s first Pyramid Country trip. I invited him ’cause he’s been livin’ in Phoenix for a bit now, killing it on and off the board as well as behind and in front of the lens. He really nailed it with helping me film this, along with our ABQ homie Dean Kubasek. Both of them got tricks in the edit—wish I could’ve too. The bad back strikes again! Thank you for all that you do, Nicky. Stoked you got this nose manual across and down, too. Shit’s gnarly! Big love 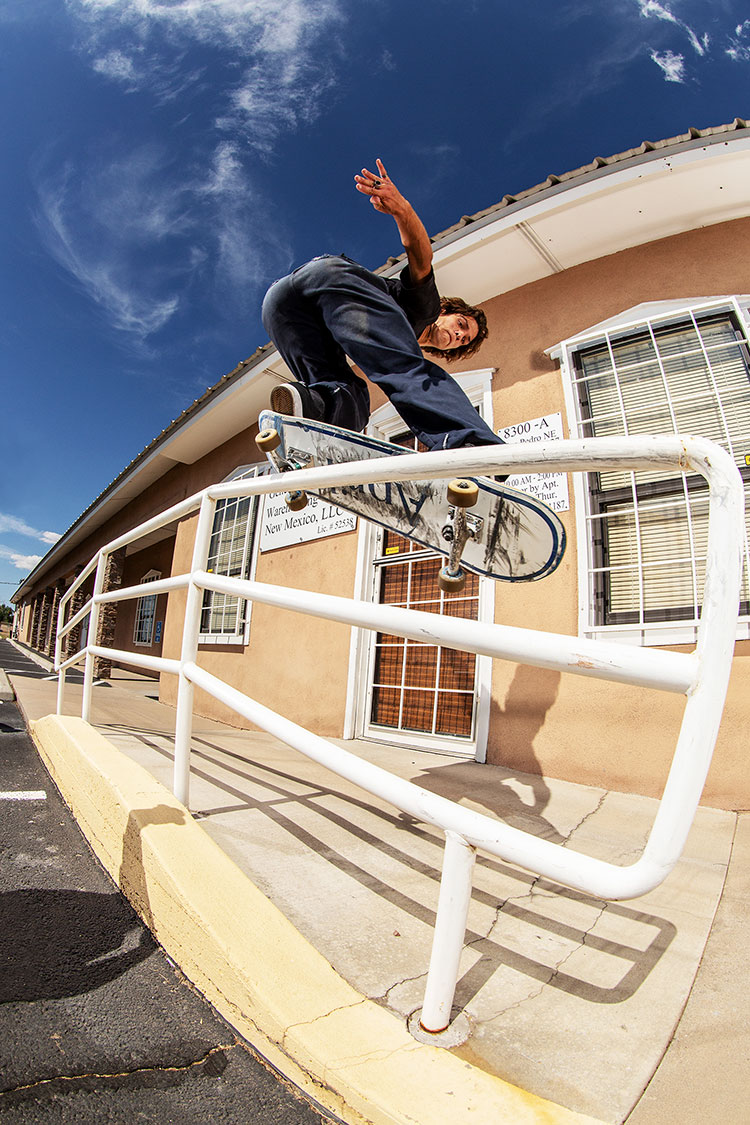 This was a fun mistake of a session. I thought I knew my way around ABQ so I tried to make it to a spot without navigation. I got on the freeway heading in the wrong direction and had to do a loop around to get back on the right path. I noticed this spot as we were turning around and we checked it out. Ronnie rode away from this back Smith in no time, we got a little McDonald’s break and Nicky iced me—all in all, a very productive mistake! 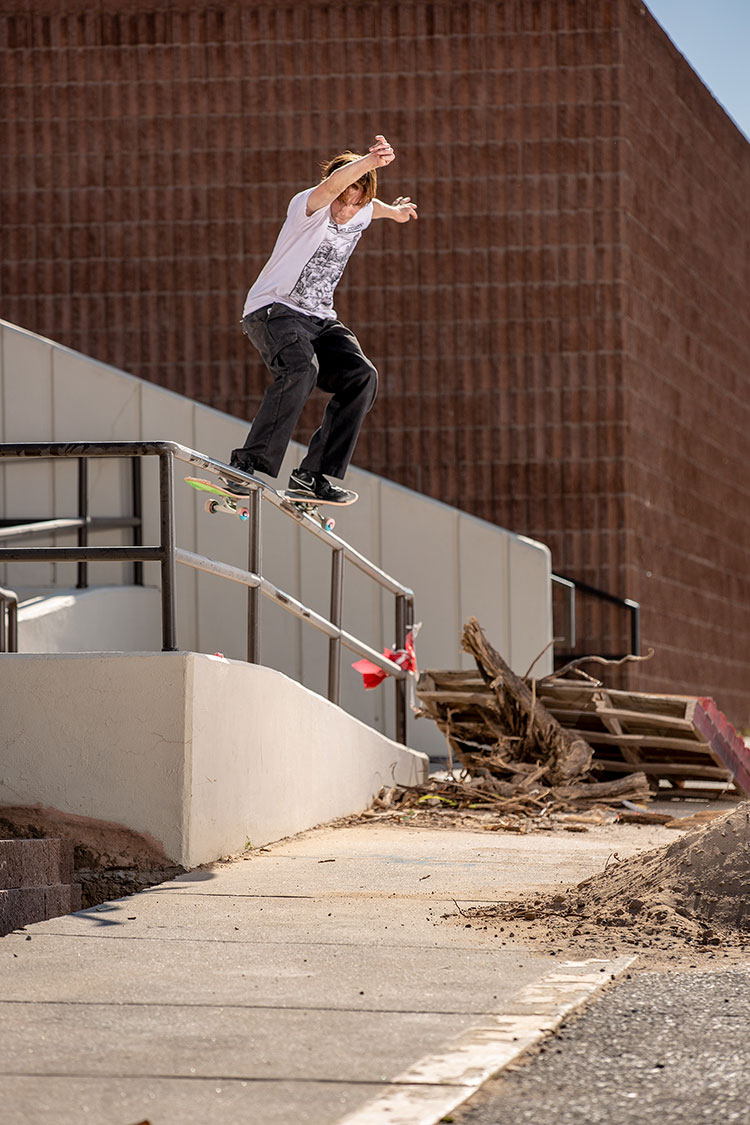 The shit Aaron comes up with is baffling to me. Watching him throw bundles of brush and sticks at the end of this handicap rail was funny. The more shit that he piled on, the funnier it got—’til he started jumping up and down on it and we realized it was somehow sturdy enough to actually ride. “Got a sign and some tape?” He asked, at which point I knew it was on. Goure’s the Frankenspot champion of the world! Feeble pop out 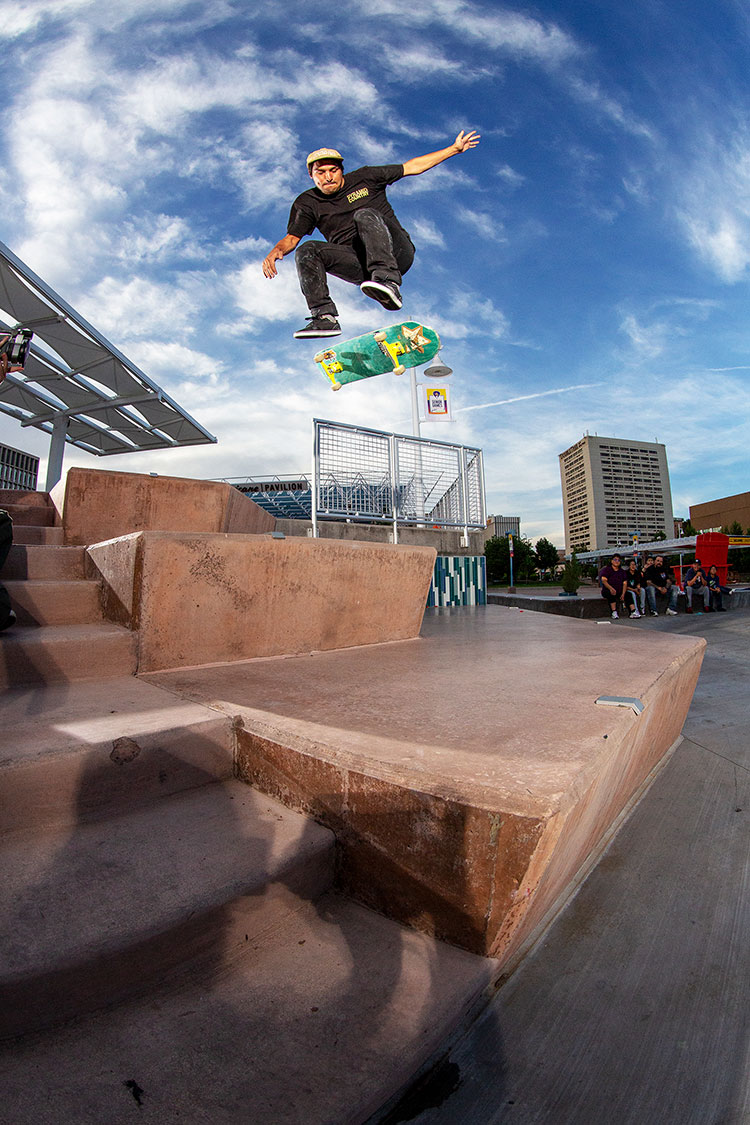 This three block is large and in charge, but like every spot it has its pros and cons. Wait—why hasn’t Converse made a video called Pros and Cons? Anyways, the landing of this spot is a splash pad for kids, so you need some serious spotters and luck that the parents trust you and are stoked. Not all of them were. The cops came and let us keep skating which severely upset a few parents. Jonathan Pierce and the boys still got it, though. Nollie heel in classic Jonathan fashion—quick and perfect. So hyped we’re still on the road doing this shit together, Jon! 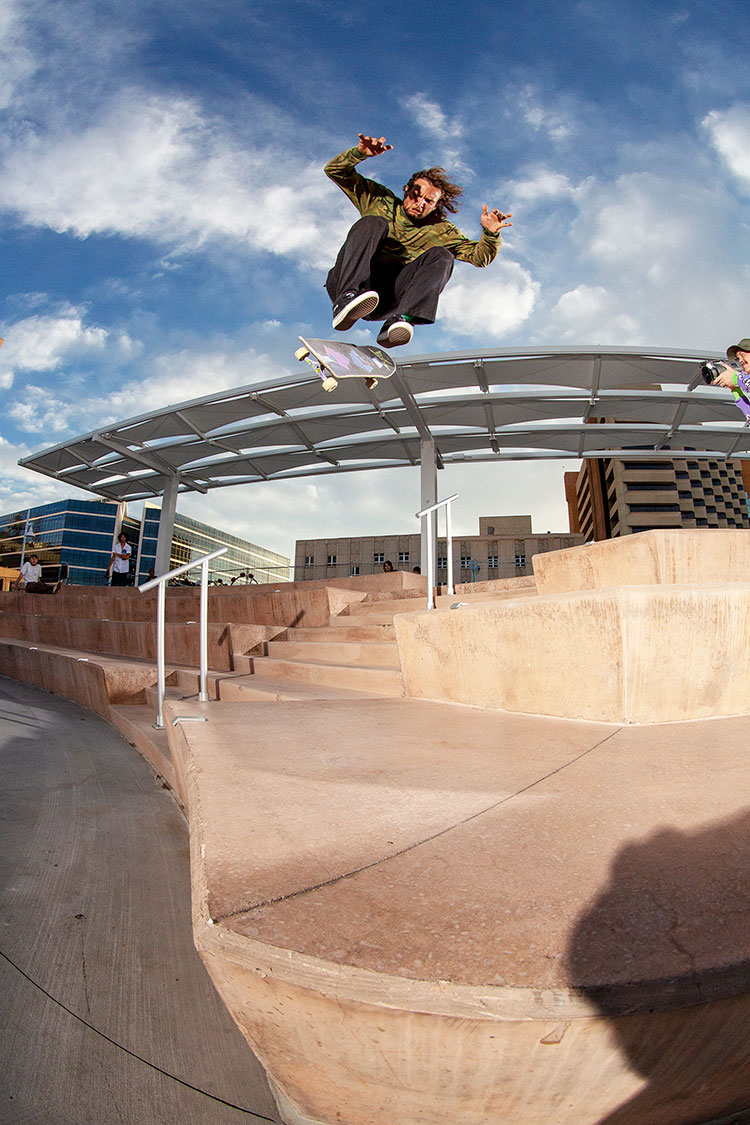 I’ve been skating with Tyler Franz and Jonathan since we were kids in Michigan 15 years ago. Time flies. I’m glad to still be flying with you boys. Varial heel 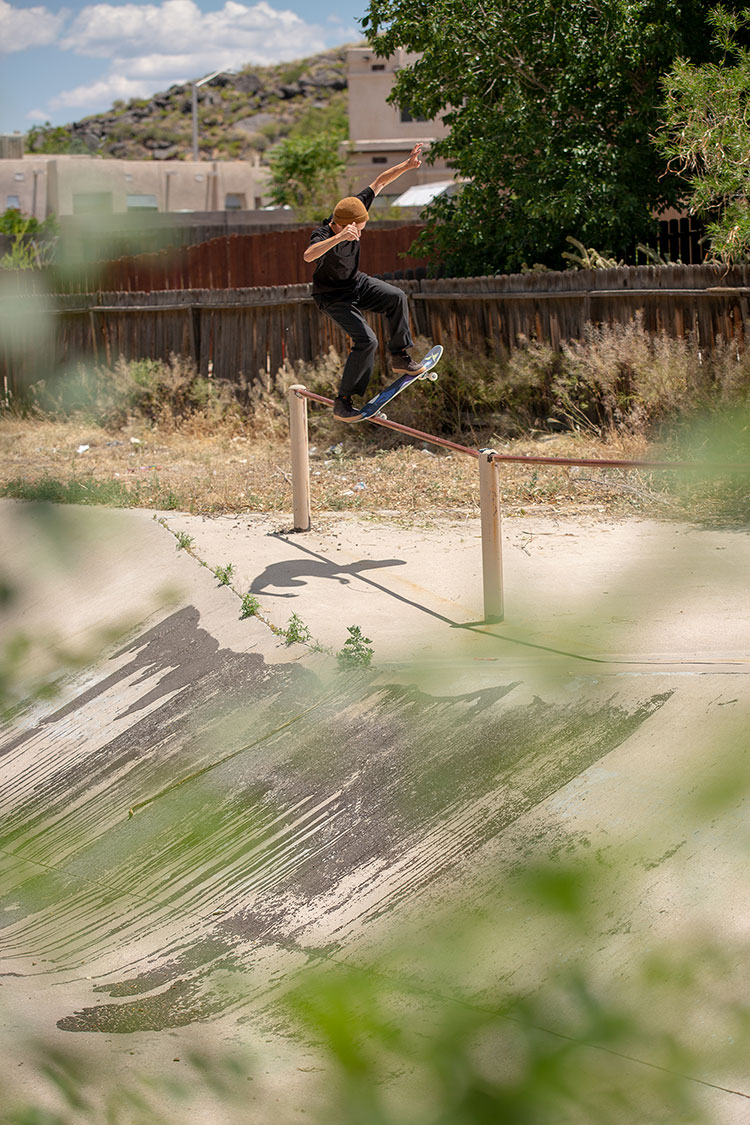 This is dog shit ditch. Unlike its name, this spot is far from being dog shit. The cops came pretty quickly, which sucked ’cause everybody had tricks for this thing. Rick handled the blunt before the fuzz made their untimely visit. That totally was dog shit 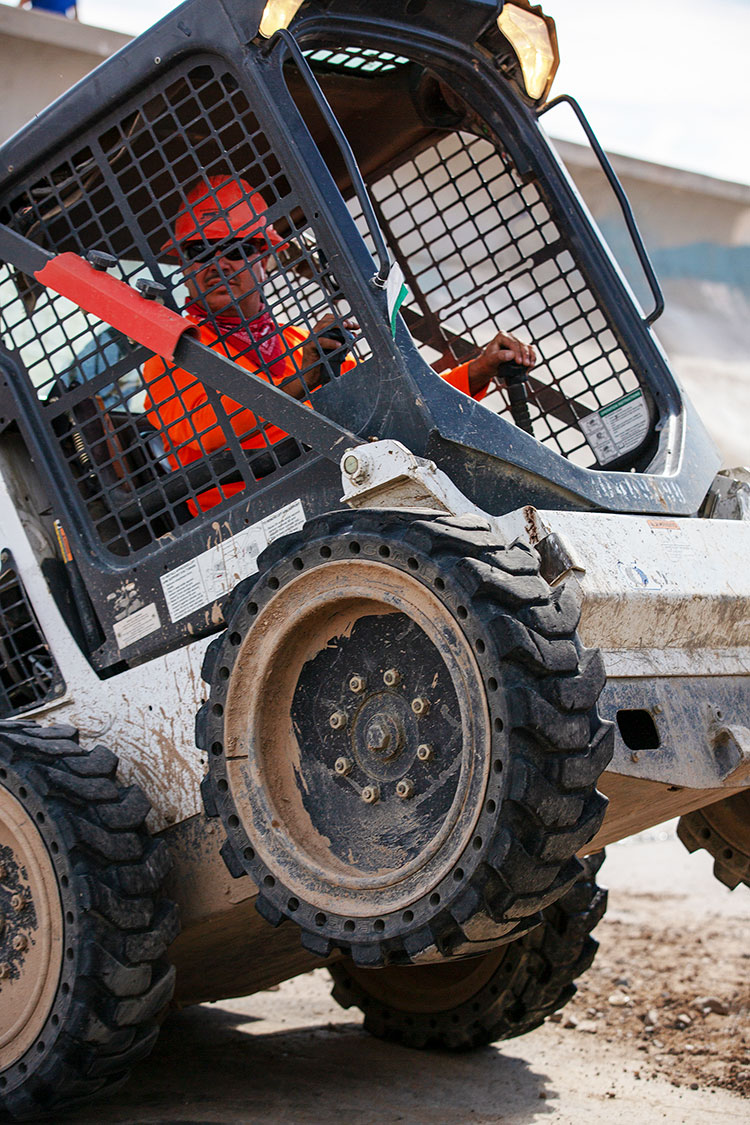 These dudes kept rolling up in their machinery at one spot we hit. This guy was hyped. He got the session popping off with a manual 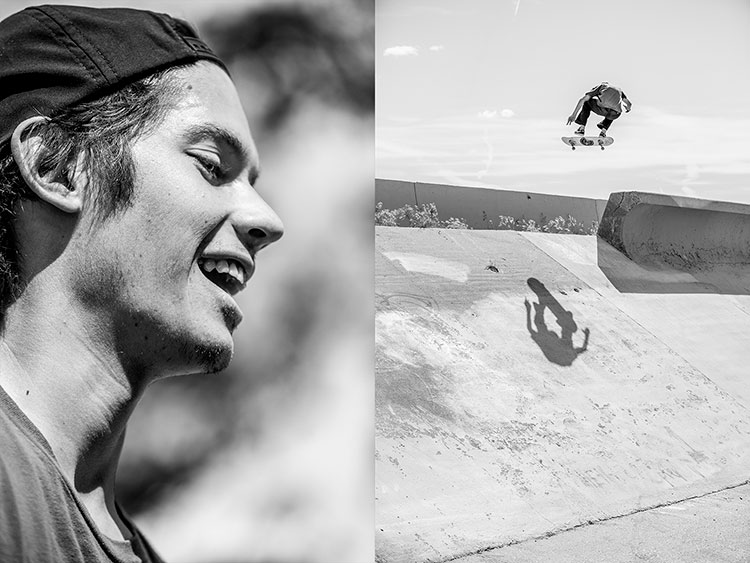 This is such a scary one—a big drop into a steep bank with a ten-inch wide run up that is just feet away from freeway traffic. Lots of the crew got down here, but Rick’s backside flip came out particularly sick 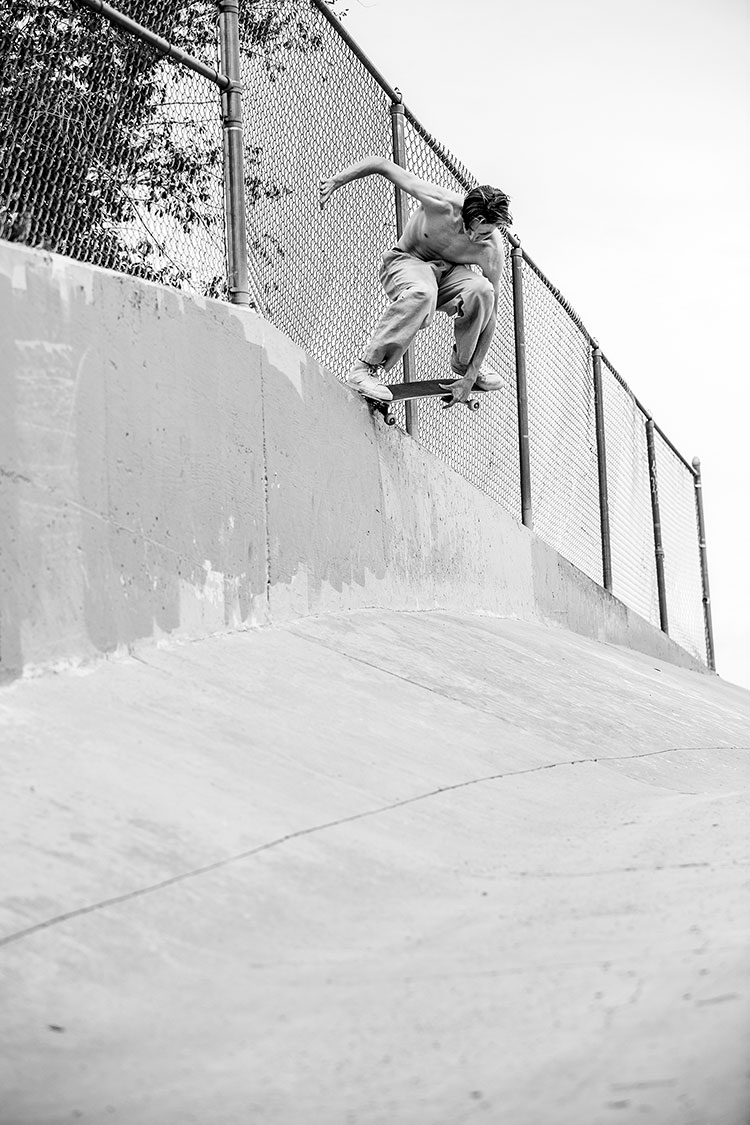 Aaron was carving this ditch like he was slalom skiing before hitting this wallie crooks yank in. What isn’t pictured is the tunnel you end up riding into. It’s pitch dark in there—spooky stuff 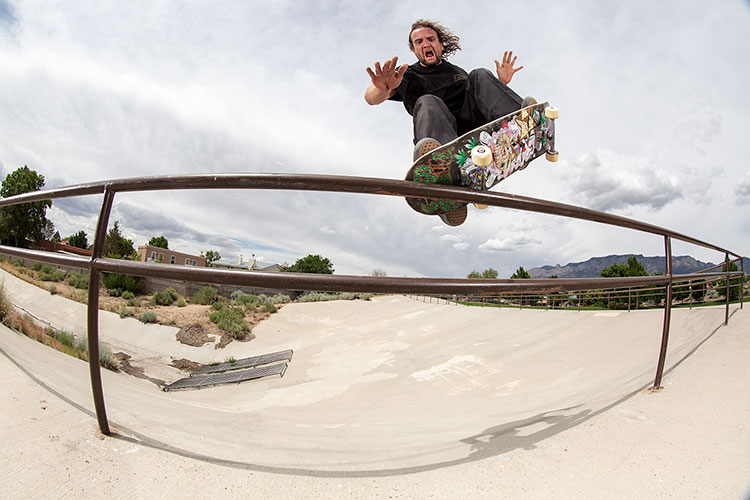 Tyler had been stewing on this nosegrind for years and years, since he first 50-50d it way back in the day. He got to ride away from it on this trip in front of the whole crew. Look at that face—that’s the face of a warrior! So fucking buck 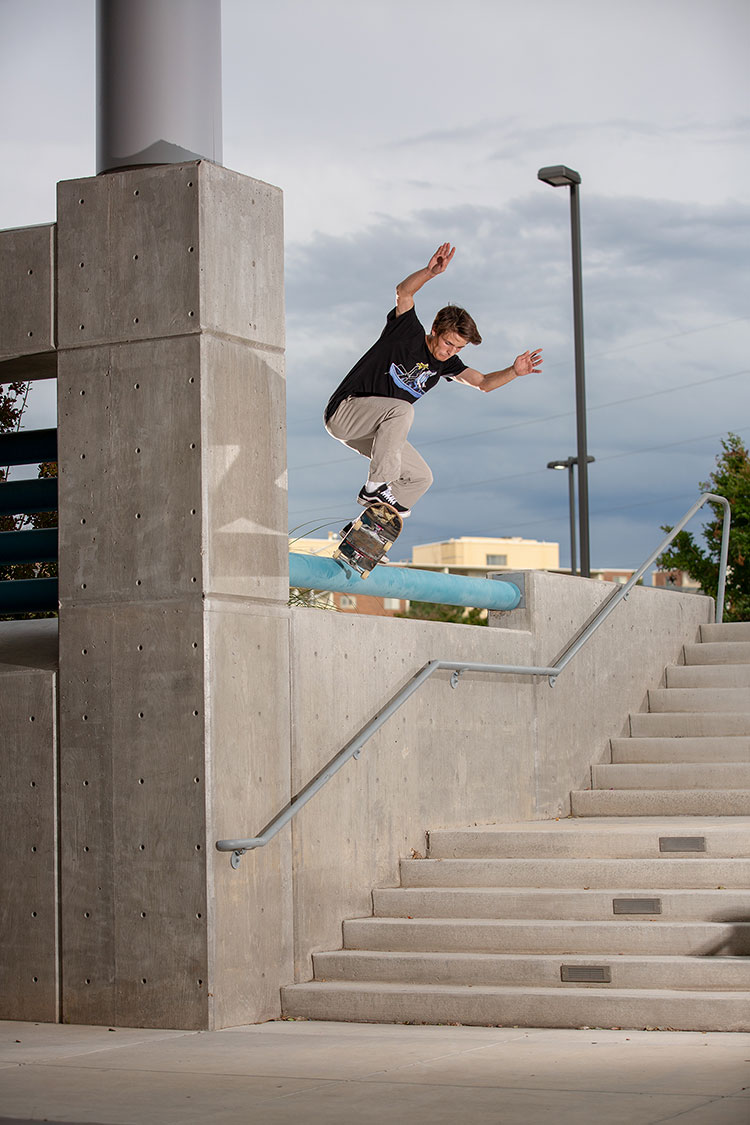 Gush took us to this spot right out the gates—not playing any games. This is at the high school he just graduated from. I hadn’t yet filmed a clip with Gush and I was shitting my pants worrying about him. So much could go wrong here, but nothing did. He handled the fuck outta this behemoth of a ride-on grind. Good shit, man! And good on ya for graduating, too. School sucks. Congrats! 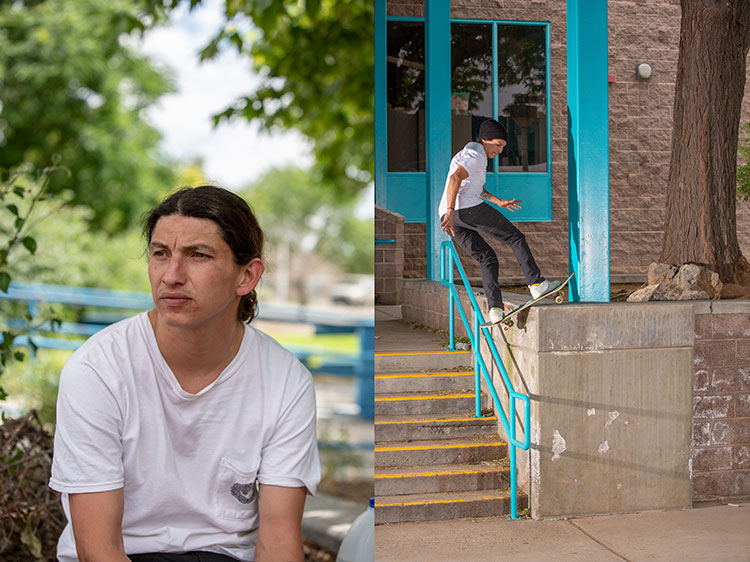 “Often you’ll hear people throw out the cliché, ‘best dude on and off the board,’ but rarely are they describing someone as totally rad as Jake “Da Jeweler” Johnson. He is just simply the best. He will give you the shirt off his back, fix up a crack at the spot for you, give you the weed in his pocket and show you all of what Albuquerque has to offer. It is not hard to become instant homies with him. He has a way of making everyone feel welcome. I’ve known Jake for most of my life and he has always put skateboarding, his friends and his community first, without expecting anything in return. Albuquerque is a beautiful city with amazing spots and incredible people. If there was one person to be a perfect representation of the city’s glory, it would be Jake. Thank you, Jake, for always holding it down so hard and being the best ABQ host a squad could ask for!” —JD Palmer 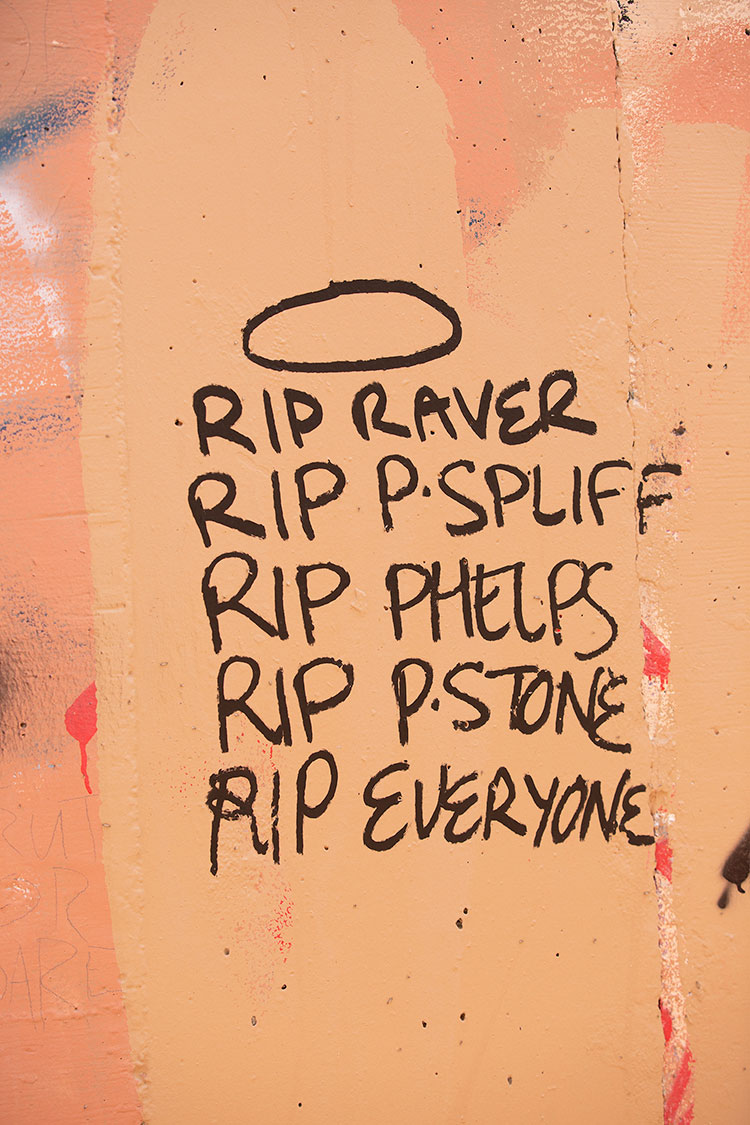 It’s been a rough couple of years for skateboarding. Do it for those who can’t. Love your family and friends while you can. Heartbreak never goes away but neither do the good memories. Forever and ever loved, this one’s for everyone