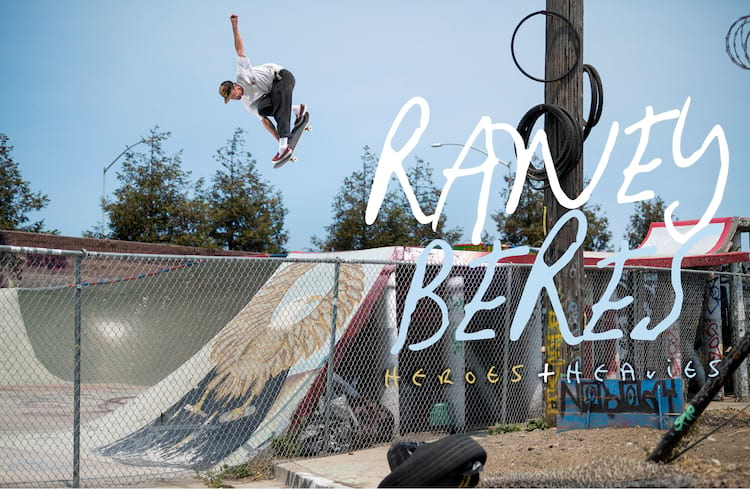 The Texan transition terror pulls influence from giants across the skate generations. True originals like Phelps, Monk, Tim Kerr and Jeff Newton all rolled in so Raney could blast out. Read on to see him skate fast and honor the past in our November '20 issue. 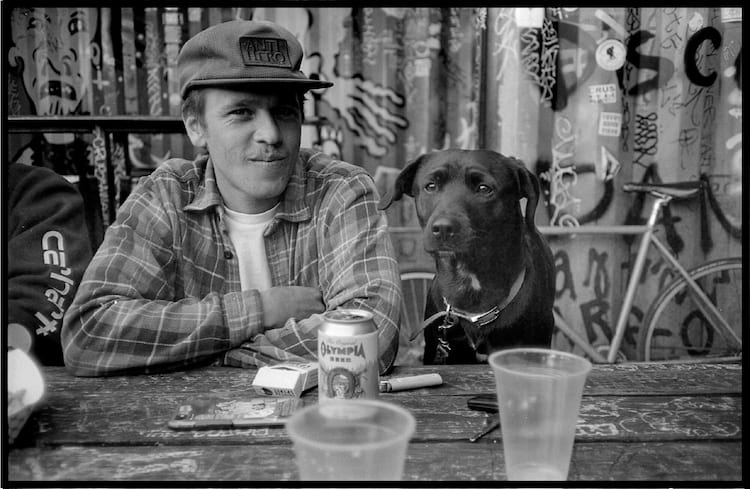 Zorlac was my first board sponsor and Jeff Newton is a key component in my lifelong quest to experience the world with a plank of wood under my feet. His wit and punk-rock attitude were the initial attractions, although my immense admiration for him would come a bit later when I began to research the dark days of skating known as “the early ’80s.” I learned it was Jeff and people like him who built this industry and community out of virtually nothing. By sending letters, these individuals would organize events, get all 15 pros together, write an article and secure its place in the skateboard history books (Thrasher). Technology moves at rapid speeds and the past is often left behind to rot. I’m not asking you to dwell on it, but maybe the next time you go ride, think about those people who put in countless hours to make skateboarding so accessible today, for who knows where we’d be without them. 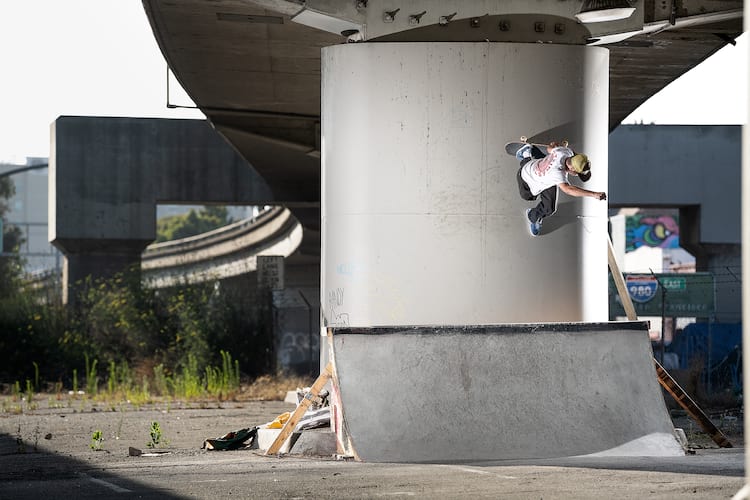 Under another California freeway, Raney keeps it Texas. Gibson-style boneless off the wall     Photo: Coulthard 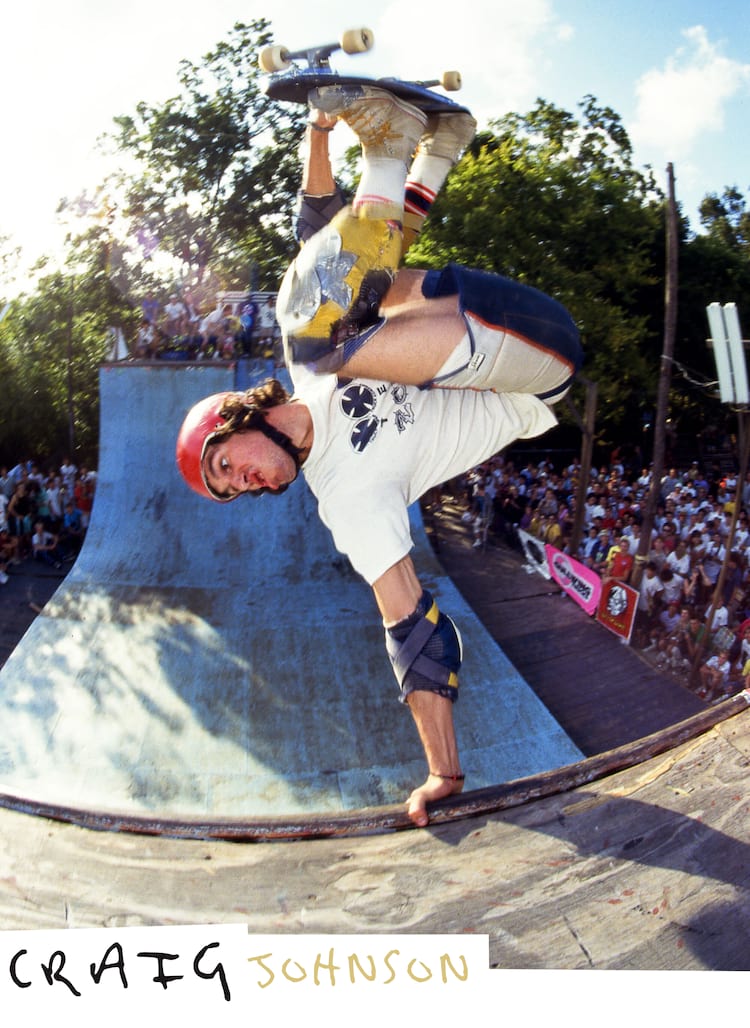 I was no more than 12 years old when I set out for my first skate trip to Dallas. I got a call from Jeff Newton—he said there was going to be a big session and I was encouraged to be there, so my dad packed up our truck and we hit the road. All anyone there could talk about was that some old dude named Craig Johnson was gonna show up and skate after a long hiatus. I heard mumblings of dreadlocks exploding through the top of his helmet, so I was intrigued. He eventually showed up—no dreads in sight—and ripped around the park for a bit before deciding he needed to grab some liquid courage from the car. En route to the cooler, Craig took a digger in the parking lot and broke his collar bone. I was pretty confused about what all the hype was about. That evening I accompanied my dad to a local watering hole to watch some live music while he kicked back some suds. In walks CJ, straight outta the hospital. He took a seat and a Lone Star promptly hit the bar top. As I watched him drink and laugh the night away seemingly unphased, it all started to click—Skate Tough or Go Home wasn’t just a slogan to sell product, the Zorlac guys truly believed it and lived it. 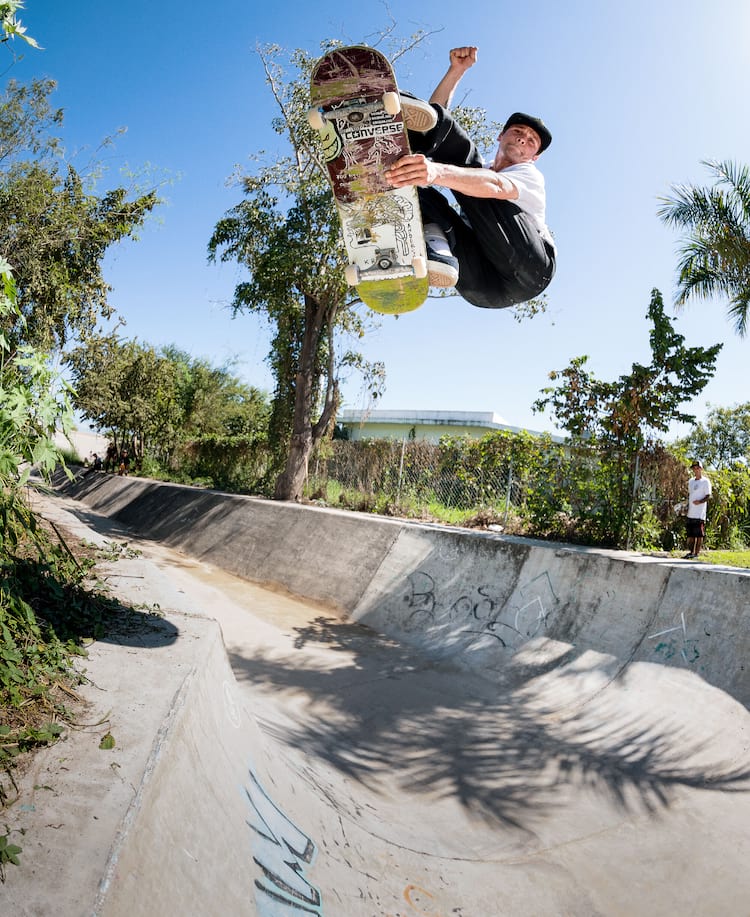 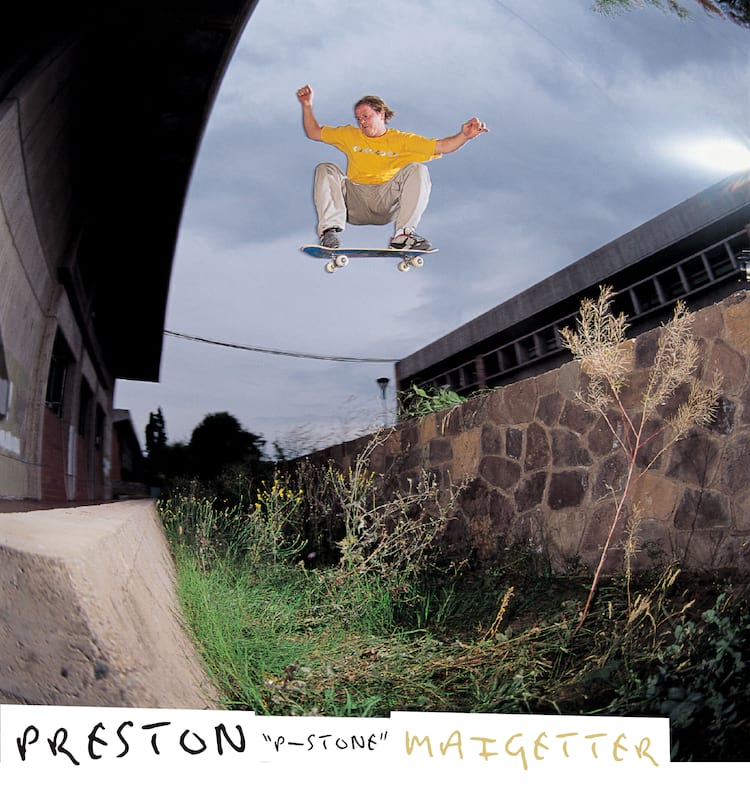 Preston was a worldly-wise man with many talents; he was an international local. Aside from having friends across the planet, he also had the astonishing ability to remember specific and personal details about each and every person he encountered. I once told him a story about my father—whom he’d never met—and for years after he would always ask, “How’s Andy doin’?” And if you ever spent more than ten minutes with the guy chances are he knew something about you, too. Skateboarding is a global language, meaning that with your board and some PMA, no matter where on Earth you may find yourself, there’s an ally nearby. Hit the road, meet new people, crack a brew, catch a grind and live. 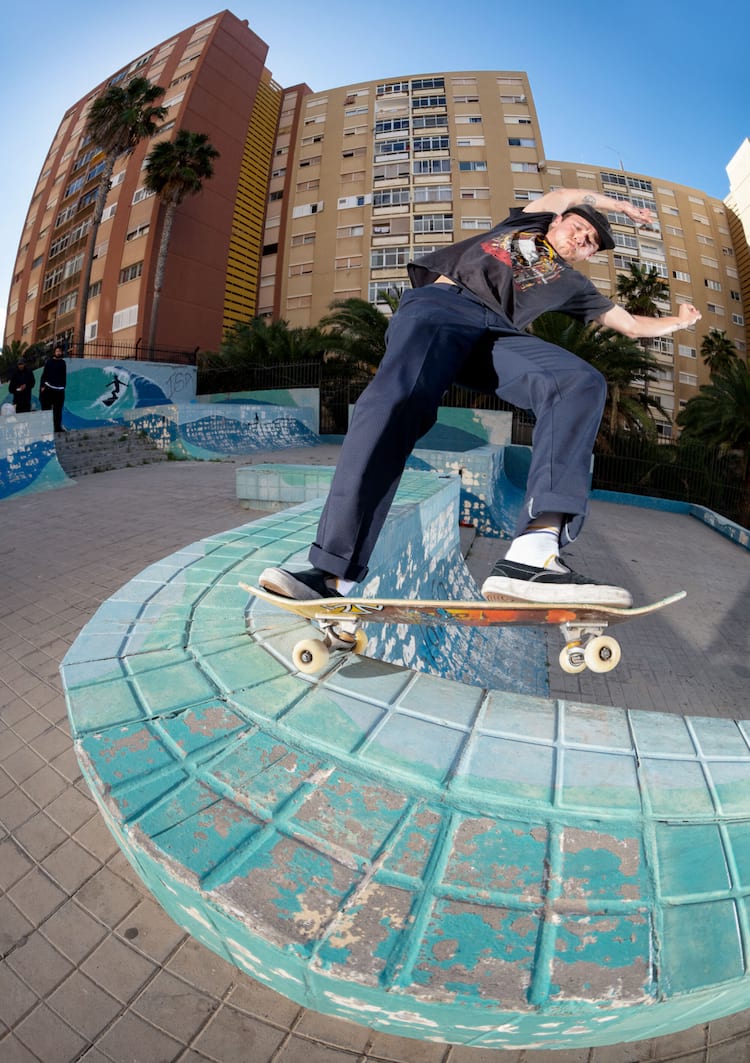 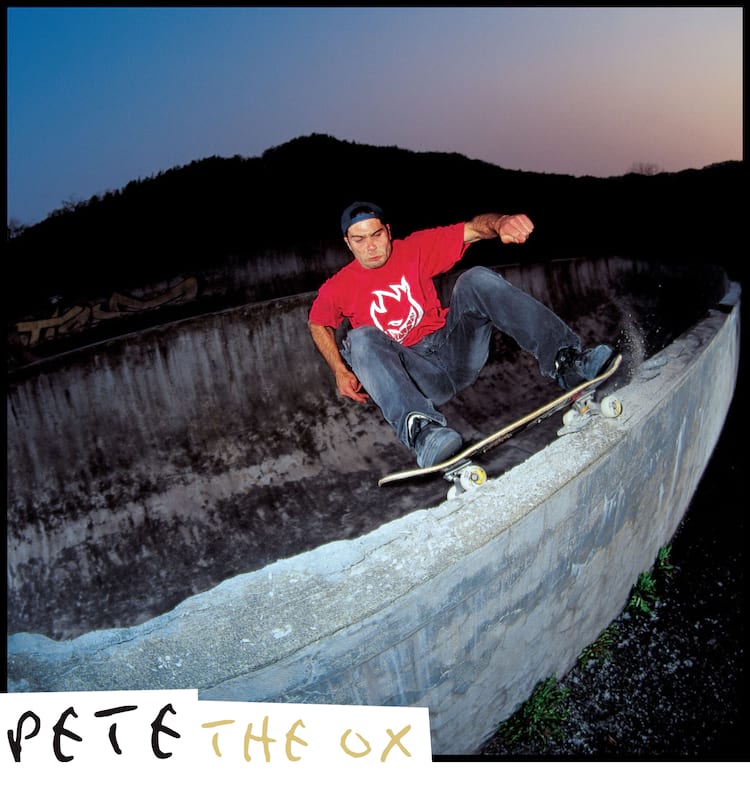 When I saw the PG&E worker peek his head over the fence, I thought we were busted for sure. I looked at P-Stone and he let out a, “Yeah, Pete!” from across the deck. “That’s the Ox,” Stone said, followed by a hefty chuckle. Pete jumped in, took a couple rides on a borrowed board, and in typical fashion transformed the pool blocks into a fine aggregate upon truck contact—total decimation. A quick glance at this watch: “Shit, I gotta run,” and then he was gone. As the dust settled, I stopped there floored, finding myself unable to process exactly what I’d just witnessed. I was originally introduced to Pete the Ox by P-Stone’s videos growing up, now I’d just met the man himself with P-Stone present—full circle. Watching those clips as a kid, I remember being blown away by his style. He skated with a reckless abandon that was infectious. When I saw him do Indy airs I was hooked; I had to go out and learn them myself. 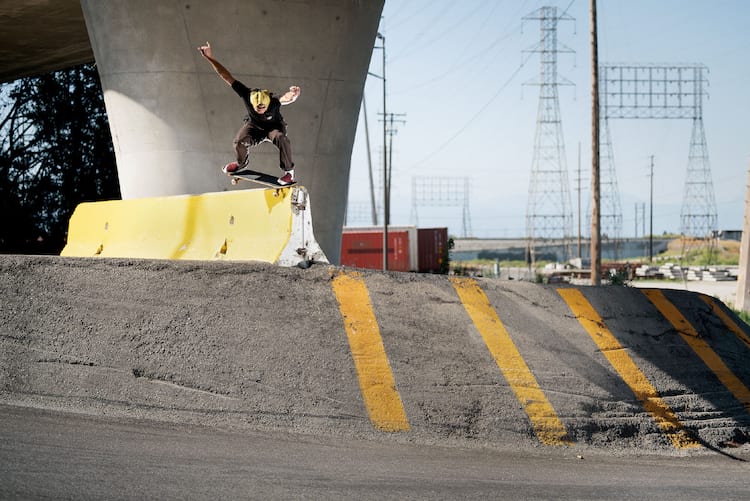 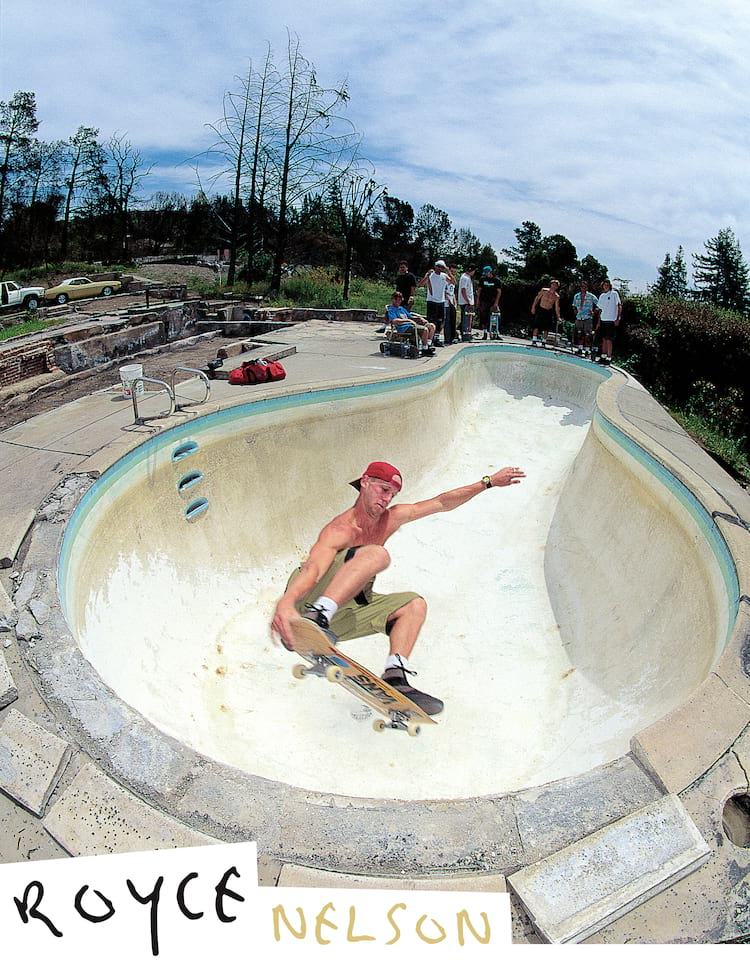 For years, the only exposure I had to Royce Nelson was a sequence of him in Insane Terrain grinding over the stairs in a pool, yet I still would’ve told you he was one of my favorites—seven frames of pure power was all the proof I needed. Since moving to the Bay Area I’ve been fortunate enough to experience this energy firsthand on a few occasions. Less than two weeks before writing this, I was outside Lower Bobs lurking with the local vagrants and not skating. Royce pulls up, says hello, walks in and gets right to ripping—no hesitation. Within a few runs he managed to simultaneously light up the park as well as a collective fire under our asses. Like zombies rising from the dead, we all slowly reached for our boards and began feeling the sensation of life pumping through our veins once again. Just like that, the session was rev’d up and we all left Bobs that night on high. It’s tough to articulate the feelings certain people give you when you watch them skate, but that rush can set a spark in your soul. Find yourself lucky enough to keep those ones in close proximity and that fire can burn forever. 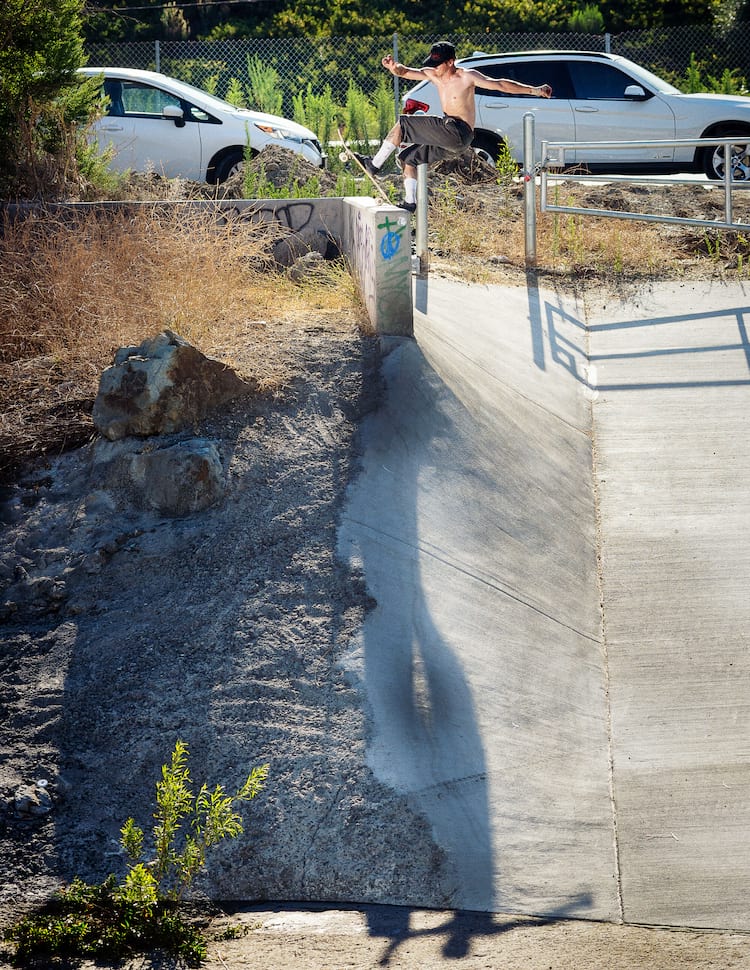 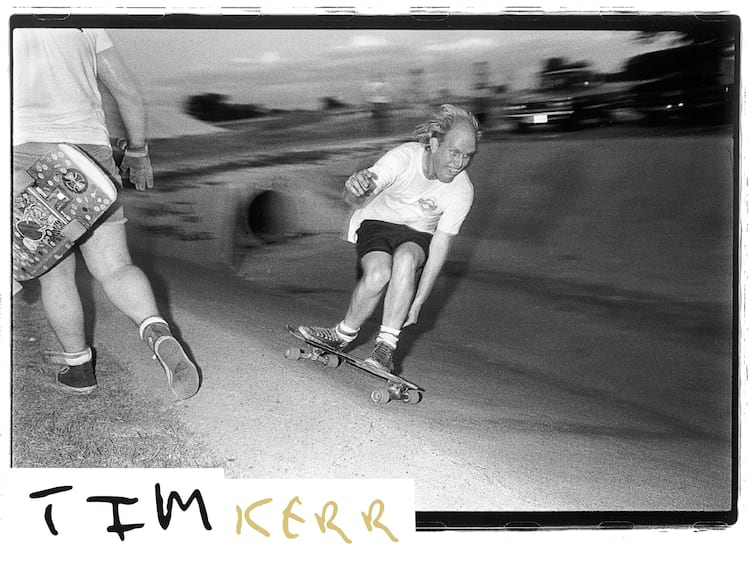 Look up any photo of him skating or playing onstage and you’re guaranteed to see a smile on his face as big as that ’ol Texas sky he was raised under. His band the Big Boys played an integral part in the marriage between skating and punk and they were featured prominently in the early issues of Thrasher. These days not much has changed—Tim still skates, surfs and makes music/art which to me is truly inspiring. His paintings of Texan legends ranging from Jeff Phillips to Mance Lipscomb are definitely worth checking out, and they’re all signed “-your name here” letting the world know that you, too, have the ability to create. Through mediums of expression or just his general outlook on life, Tim has been, and will remain, a continual contributor of stoke in my world. 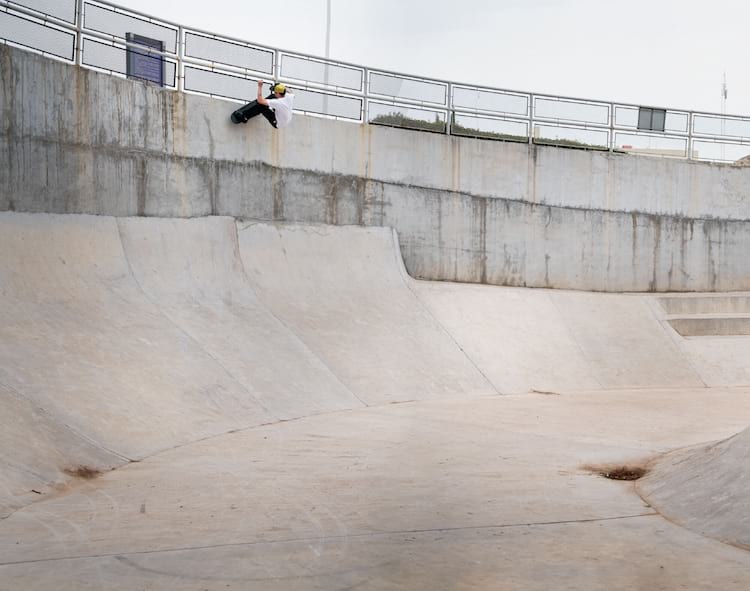 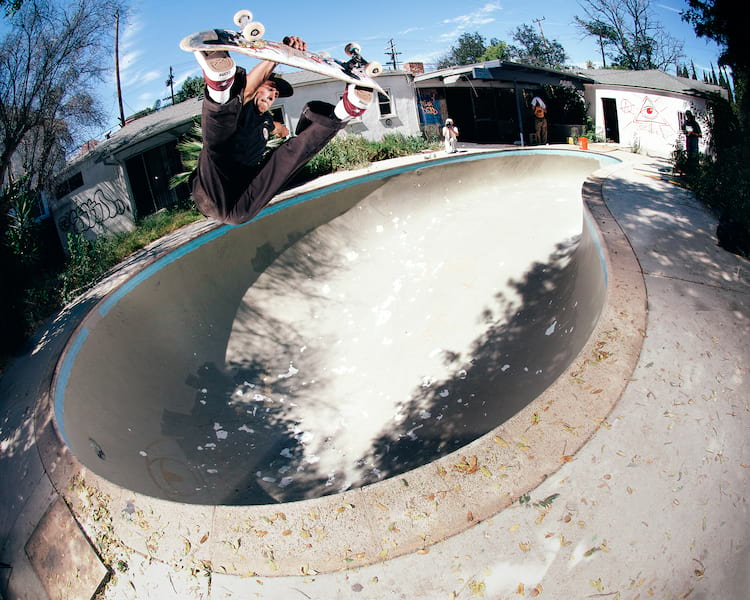 Not even the Illuminati could stop this stiffy     Photo: Papke 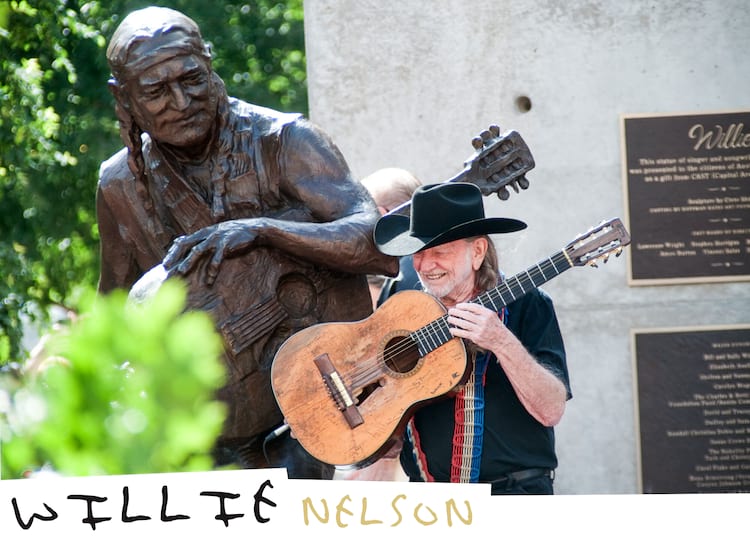 I didn’t have a very close relationship with either of my grandfathers, so Willie always seemed like the one I never had. His voice has been a constant in my life as long as I can recall, passing down stories and old worldly knowledge via song. It’s the examples he has set throughout his life, however, that have impacted me the greatest. Most notably these two: do things your own way and stay on the road forever. “Sometimes it’s heaven, sometimes it’s hell, sometimes I don’t even know.” 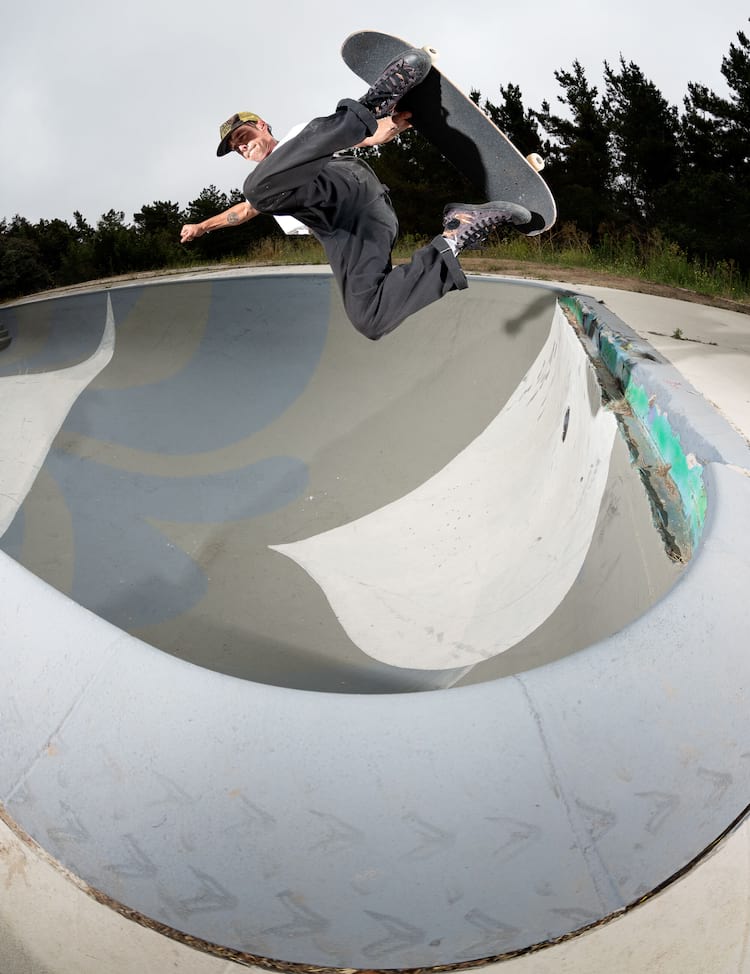 On the road again, method to fakie through the corner in Watsonville    Photo: Coulthard 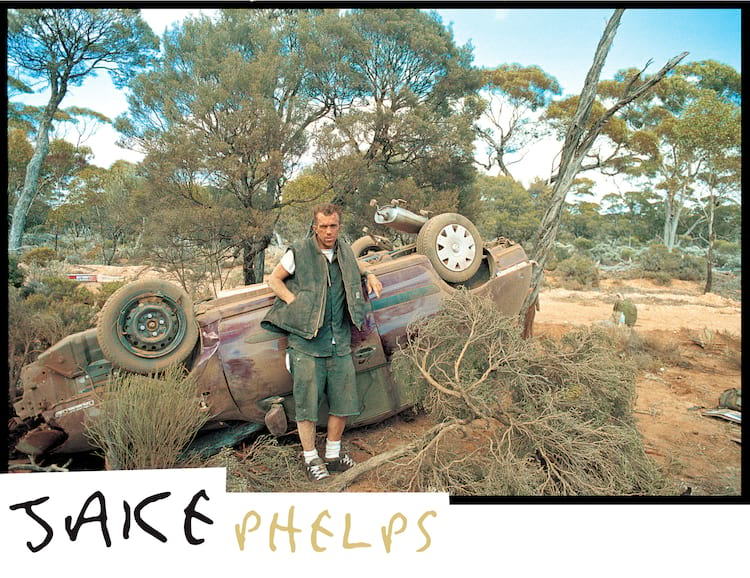 “Ugghh! Let’s go!” followed by loud banging at the door. This was the usual occurrence around 7 AM on any given trip, which meant Jake had already been out exploring the city and was ready to see more. Before I really got to know him, I just thought he was somehow lucky enough to have always been near the action—he’d see more in a week than some do in a lifetime. But once we got acquainted he showed me luck had nothing to do with it. To experience the world, you must go out and see it. Everything your heart desires is out there. Take a rip. 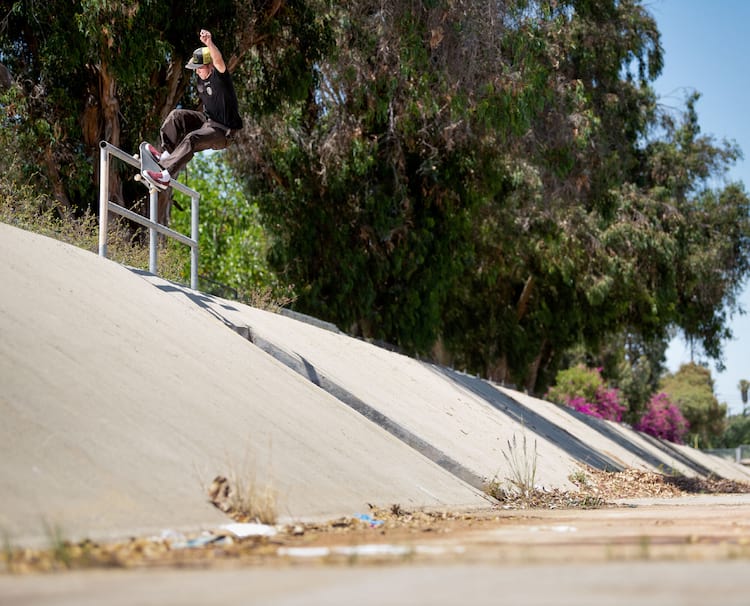 Raney answers “Wonder what’s around that bend?” with a stylish Smith     Photo: Coulthard 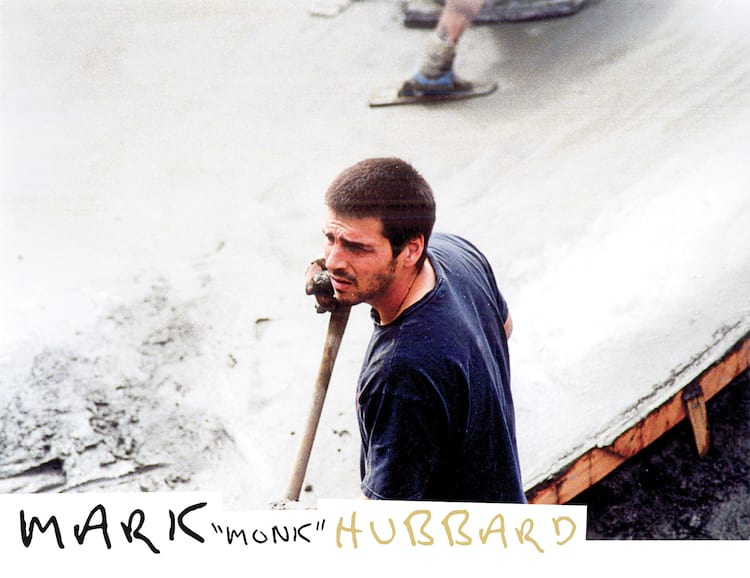 Mark Hubbard possibly did more for me than any other skateboarder. In 2003, Monk was hired to come down to San Antonio for five days to help build the first concrete skatepark Central Texas had seen since the late ’70s. What took one week of his life changed mine forever. This is where I learned things about skateboarding, myself and a new unsupervised world outside of my neighborhood. It would take an entire issue to properly explain the impact this man made on me—or anyone else who rides a skateboard for that matter—so I’ll just take this opportunity to say thank you, Mark, from all of us. 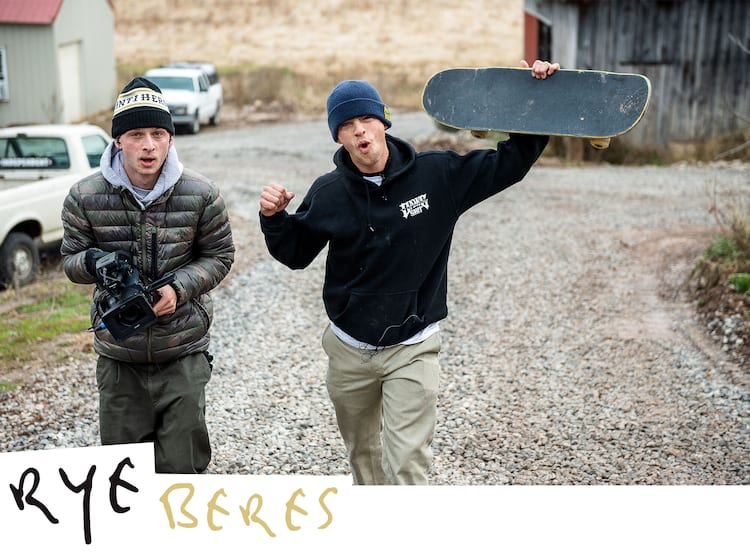 I started skating at eight years old, so Rye was only three at the time. Outside of our family, a skateboard has been the most consistent entity in his life since childhood. And by the time middle school rolled around, the kid already knew exactly what he wanted to do. Whereas I had delusions of grandeur about becoming a skateboard superstar, Rye always had his sights set on working in the industry. He created homemade zines, filmed videos and forged friendships that led him to a job at Crailtap straight out of high school. He continued to work his ass off and eventually graduated to a video position here at Thrasher, helping generate stoke for the masses. The point I’m trying to make is that I’m inspired by people who know what they want and make shit happen for themselves. And Rye did just that. Brothas 4 life. 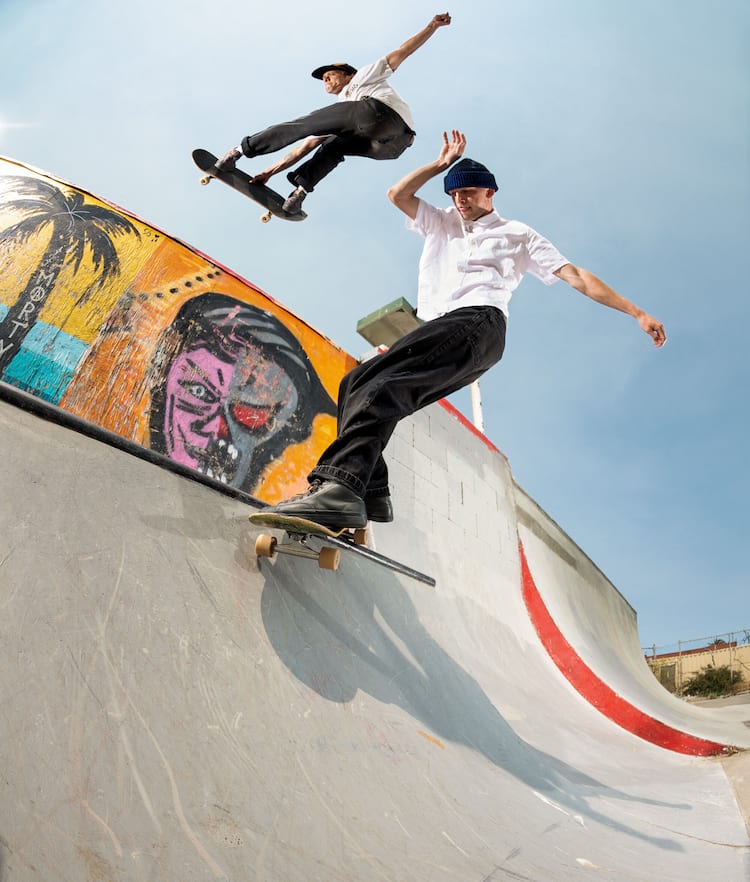 The Beres boys, doubled up at TI     Photo: Coulthard 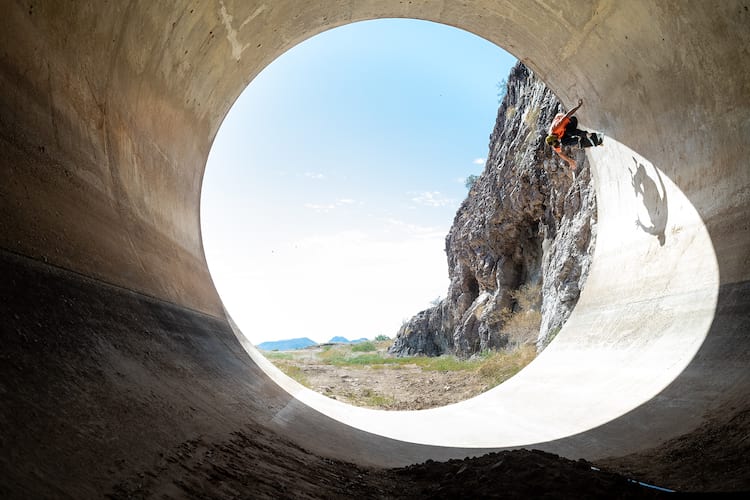 Ollie at about 2:15. Raney’s adventure is just getting started Photo: Rhino