RVCA's "Smash Through The Basque" Article 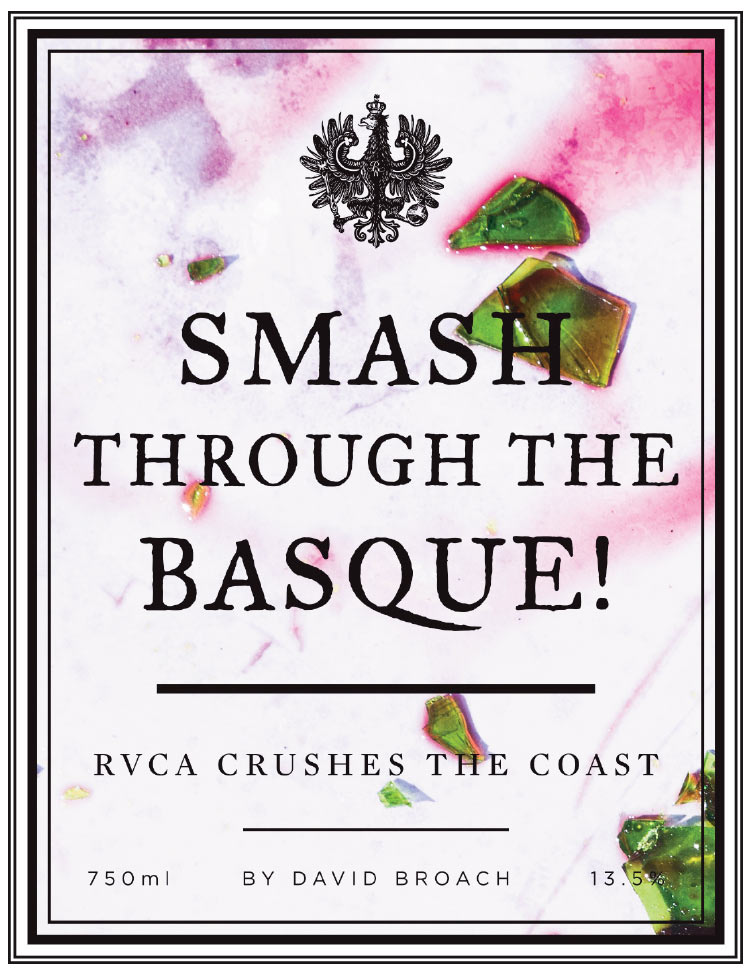 RVCA recently headed out of the country for a quick trip to the South of France and down through Northern Spain. This part of the world is known as Basque country, and it’s where some of the world’s greatest wineries are located. With only eight days to skate, angry cops, camera glitches and multiple rainy days, our proverbial (and literal) wine glasses stayed half full. But when you’re traveling with good people to new places, it’s hard to let the skate struggles get you down. We were in Europe and our skateboards brought us there. To me, that’s damn near unbelievable. 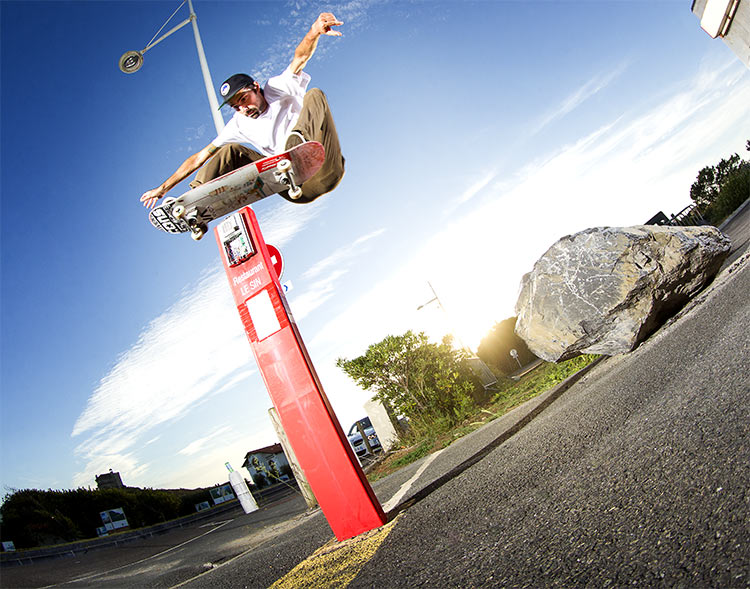 Remy Taveira strapped on his dancing shoes! Switch rock hop to switch pole pop, this kid’s got some moves

We started our accelerated ride down the grape-lined coast in Bordeaux, France. Like all trips, certain expectations from back home were looming: HQ wanted a tour video and some photos documenting the good times. This quid pro quo is always worth it. They pay for the adventure and we bring back the stunts. It inevitably puts a certain amount of silent pressure on the situation, though. With eight days to get it done, we set out to smash through the Basque! 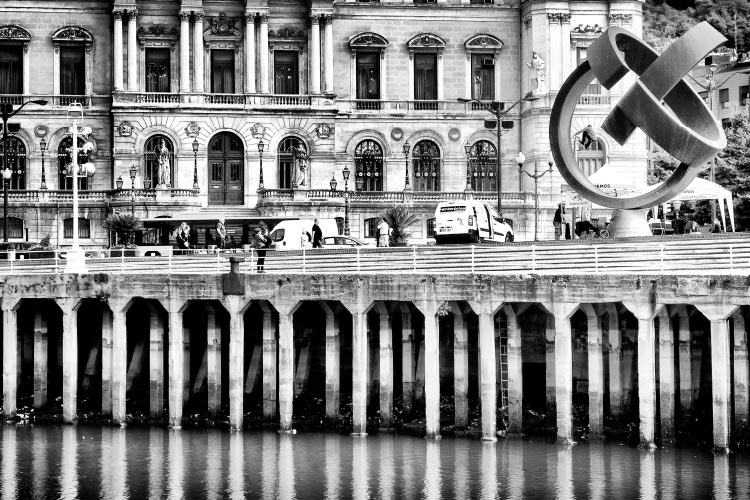 The plan was simple: everyone fly in, skate a few days in France and start driving south through Spain. Everything was going according to plan in Bordeaux; we had sunshine and a couple of new spots. But after a day in the city we realized the new spots were the only spots. Not sure if we were just being lazy or if the town is actually light on things to skate. Either way, we had a hell of a time finding pay dirt. 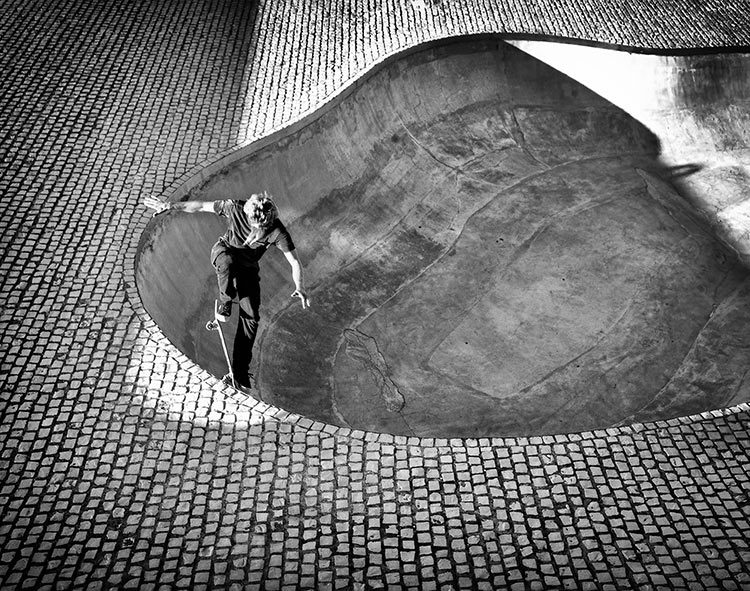 Greyson’s no stranger to hairy situations. Rugged nosepick on some cobblestone coping

After a couple of days circling around looking for places to shred, we ended our last night in Bordeaux in the company of Ed and Deanna Templeton. Ed had some photos in a group art show a short drive from our hotel. The gallery was in an old warehouse district that was being revitalized. There were a bunch of modular homes scattered throughout the area that served as housing for refugees from war-torn countries in the Middle East. Seeing things like that will quickly put little problems like, “Where are all the spots?” into perspective. On the outskirts of the warehouse district sat a huge indoor skatepark. Greyson found the transition and started in on it. It’s always amazing to watch that guy fly around on the wooden waves. He sped around the place and got the locals fired up. It doesn’t get much better than art shows in wine country with some added shredding. We even passed a couple cheese plates around during dinner to make it extra classy. 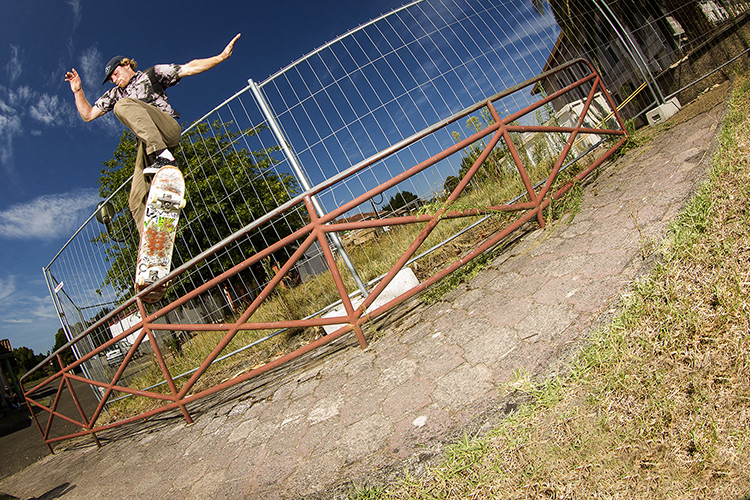 That evening we set sail for San Sebastián. We dropped anchor on the outskirts of a small town and stayed the night in a surf camp. The camp’s slogan was “A Sunny Place For Shady People.” It was the perfect spot for this pack of wild animals to call home for the night. The walls of the surf shacks were paper thin, and through them I overheard a neighboring camper say, “I have three tabs of acid and two hits of E left.” Yep, shady indeed. The next morning Barney notice a couple of cute surfer girls camping next to a mini ramp on the property. After a cup of coffee, he popped his shirt off and started sessioning the ramp pretty heavily. Hey, a little shirtless showboating never hurt anyone’s chances of hooking up. The girls seemed impressed by Barney’s big bonelesss. They came over to watch and he was getting some big smiles from them. Unfortunately, we had to jump back in the vans and go hit the streets. Barney left bone less. 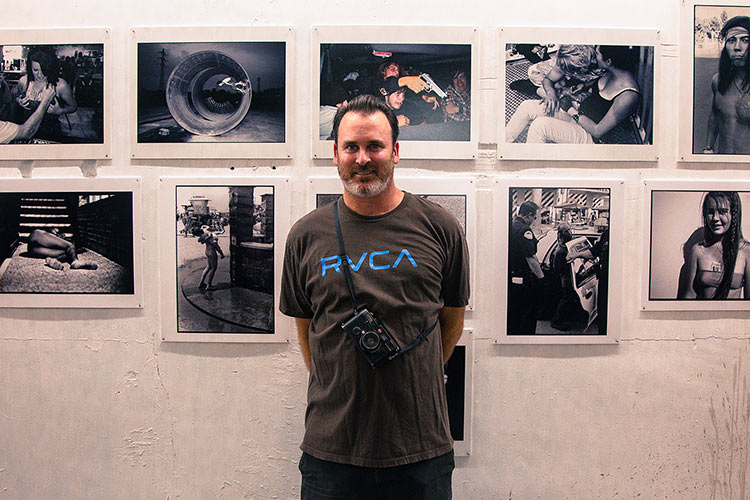 Once we hit Spain the trip started to build some momentum and our first day in San Sebastián was amazing. Julian spotted a gap in front of a ritzy hotel near the beach. The hotel security guards out front were no deterrent—Julian waited for a window of opportunity and pounced. He ollied the gap to feel it out, ran back up and tried a kickflip but it was a swing and a miss. Security caught on quick and gave us the boot. We kept cruising and found another spot around the corner, a big over rail. Julian wanted redemption and hucked a huge switch ollie over it. As soon as he landed the fuzz pulled up. We weren’t exactly sure what they were yelling at us but we’ve had enough run ins with the cops to know it was time to split. 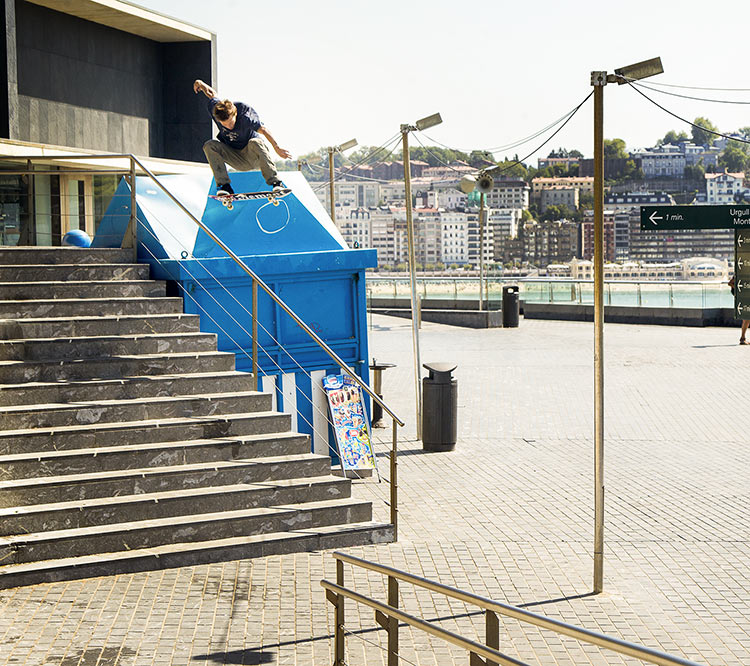 Julian Davidson, switch ollie before the Spanish po-po poo-pooed on our par-tay

Circling back, we passed Julian’s hotel gap and the security guards were nowhere to be seen. Still feeling the stoke from his switch ollie, he decided to charge it and landed the kickflip first try. We barely caught it on camera it happened so quick. The good vibes were high and the day started to feel unstoppable. But when you get cocky, life throws a curve ball at you. Jeremy had sprained his ankle in France and it was finally feeling better. We found a spot he was sparked on and he went to work. Just as he was about to land his trick, the cops once again came in hot. They pulled in with tires screeching and this time they were really pissed. They started yelling at us and snatching people’s boards. Lucky for us, our tour guide was a beast and started yelling right back at them. After 15 minutes of screaming followed by 15 minutes of a calmer argument, our boards were returned. Juanny Law let us go and we headed to a concrete park on the beach. As the sun was setting, the cold beers started to appear. We skated ‘til we couldn’t see the coping and then hit the hotel. Next stop: Bilbao. 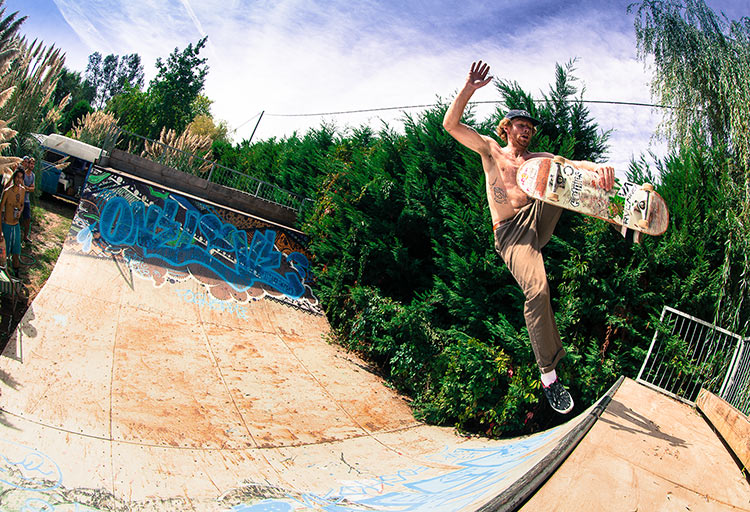 Barney, shirtless boneless for the surf señoritas. No dice

We only had a few days left to skate and were hoping for better luck in Bilbao. Unfortunately, it seemed like the San Sebastián cops phoned ahead and warned the local police of our arrival. At every spot, just as somebody was about to ride away from a trick, the fuzz would show up and kick us out. It happened so many times that it was almost comical. We woke up super early on day seven, hoping to get the jump on the Spanish pigs. We got to the first spot and—BOOM! A huge thunder clap shook the sky and rain began to fall—crazy sideways rain, the kind you run from. The shitty weather persisted until that evening, but Jeremy kept the morale high by repeatedly saying, “Shit’ll buff out. We got this.” 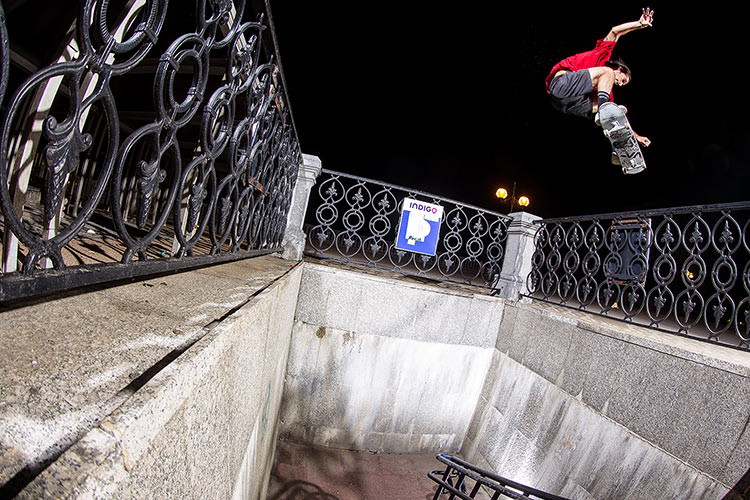 The rain in Spain stopped long enough for Remy Taveira to blast over this pit. Thanks, Skate Gods

Day eight: the last day to skate. The clock was ticking like a time bomb now. Jeremy had spied a double set that he wanted to hit up, so we went to check it out. Bad news: there was a huge protest going on across the street and hundreds of angry marchers were parading through the landing zone. With a shit’ll-buff-out attitude, he started jumping down the set while the rest of us tried to keep the landing clear. Out of nowhere, a crazy drunk guy comes running past Jeremy and, in an attempt to amuse the crowd, jumped down the double set. Instead of getting a laugh, however, he broke his damn ankle! Nothing like seeing an ankle snap right in front of you to kill the buzz of a session. With a wounded, wasted man moaning on the ground and pedestrians packing the plaza, we grabbed our gear and went in search of another wave. 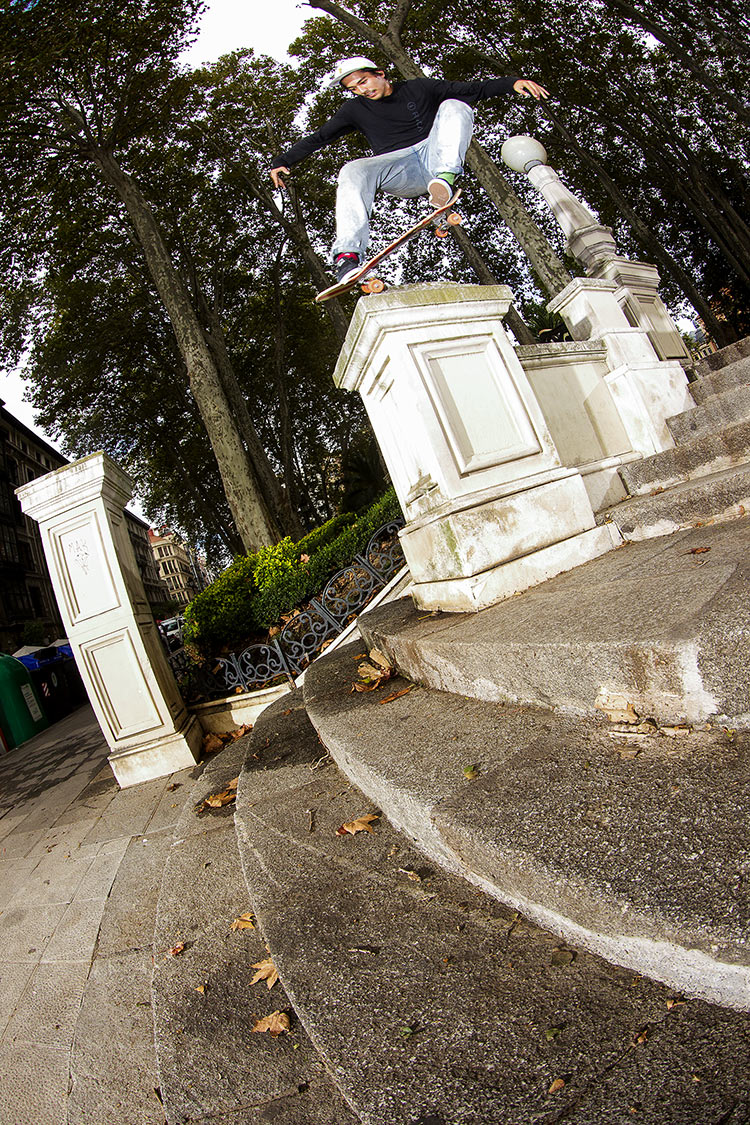 The Skate Gods had other plans for us, though. Once again, the clouds opened up and rain pissed down upon us. We tried in vain driving to other nearby towns in hopes of finding dry terrain. No such luck. With our tails tucked between our legs, we headed back into Bilbao only to notice a hole in the clouds with sunshine pouring through. This was our last chance! We went back to the double set and there was a heavenly glow shining down upon it. With no busted-ass drunk guys or protestors on the roll away, Jeremy got to work. Ten tries later he rolled away from a crook bonk and the whole crew breathed a collective sigh of relief. As we gathered around the camera to check the footage, a mob of college students descended on the spot armed with jugs of booze and cans of beer. In a matter of minutes, the landing was once again filled with pedestrians. Jeremy literally landed his trick seconds before the place would have been shut down once again. 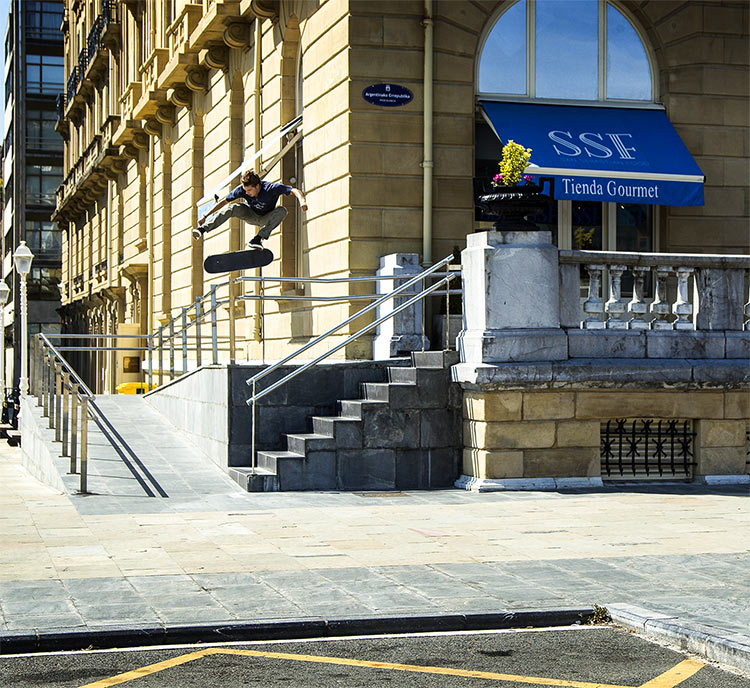 Security be damned! Julian reels in a whopper of a kickflip before saying bye bye to the Basque

With that one last trick in the bag we strolled across the street to a restaurant for a round of celebratory beers. Some trips are easier than others and it just boils down to luck. It’s like going fishing: all you can do is show up to where you think the fish might be biting and see what happens. The rest of it is out of your hands. We ran into some skate stoppers on this mission but all the guys still managed to buff it out. So let’s raise a glass of vino to these happy humans for getting the job done despite the difficulties. Salud! 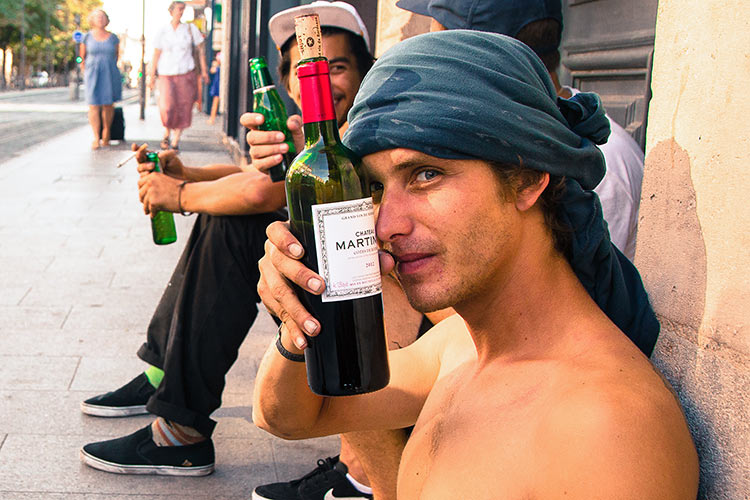