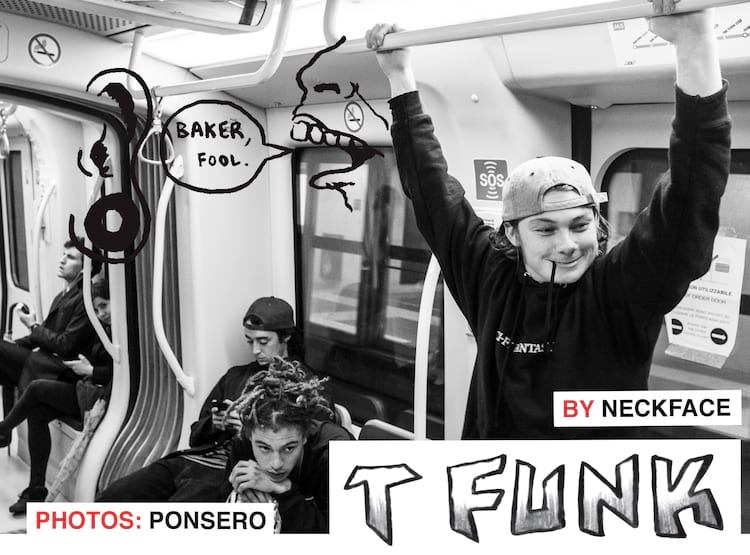 Funk, what are you doing right now?

Yeah, that’s how I roll.

I don’t know. It just got worse and worse ever since I started putting tobacco in it.

Damn. Didn’t you say Evan Smith does that?

Yeah, Evan’s shit is hella spicy too. He’s definitely one of the biggest ratio influencers of mine, you know? I’d like to give him a major shout out.

What are some things you’ve learned from Evan? Some shit from the van? You probably picked up a little of that ratio shit from him. What other shit?

Finish your beer. Don’t throw half of it away like Dustin. 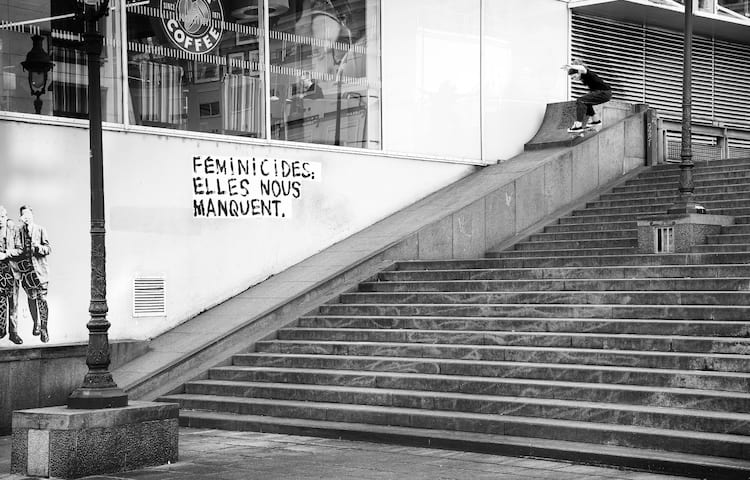 Yep. There’s sober kids in Africa. You can’t be leaving that shit.

Yeah, man, what the fuck?

For the most part. There’s this one thing I wanna try and go get but other than that, fuck it.

Andrew showed me some of your shit. It looks fuckin’ pretty sick.

I haven’t seen anything.

Do you know what song you’re skating to?

I gave Reynolds a couple songs but I’m not sure which one he picked. He has a couple different edits he told me. I ain’t seen any of ‘em.

That’s tight. It’s gonna be sick when you’re just sitting at the premiere watching that shit just like, What?! You gotta trust Andrew when he’s putting your part together ’cause that fool’s been making parts for fuckin’ 1,000 years. Sick-ass parts. What’s up with where you’re from? What’s up with the Pedlow gang? What’s the ice-cream man’s name?

Have you ever been in the ice-cream truck?

You ever drank in there?

Nah, but he sells brews sometimes low key. One time he gave me some vodka and orange juice. Yeah, he be making mixed drinks and shit.

“Excuse me, miss.” Back Smith pretzel out at Le Dome

That’s sick. What are three things you do not do when you’re pulling up to Pedlow?

Pull up on bikes, pull up on scooters and pull up asking me for a paper and a cig.

Do not ask Funk for cigs, dude.

Oh yeah, and don’t do donuts in the dirt lot.

Did you know they found a dead body at that thing you noseblunt slid, at that ditch?

And it smells gnarly down there too. Whose parts are you looking forward to seeing in the video?

Is Kader blowing it or is he killing it?

Is he getting girls?

From the Supreme video?

Just in general? Does that fool know how to roll up or what?

Yeah, he knows how.

Who taught him? He just learned on his own, huh? We ain’t saying no names. We don’t even know if he does smoke weed or not. Zach just said he learned how to do everything switch on his own so he probably learned how to roll up by himself. 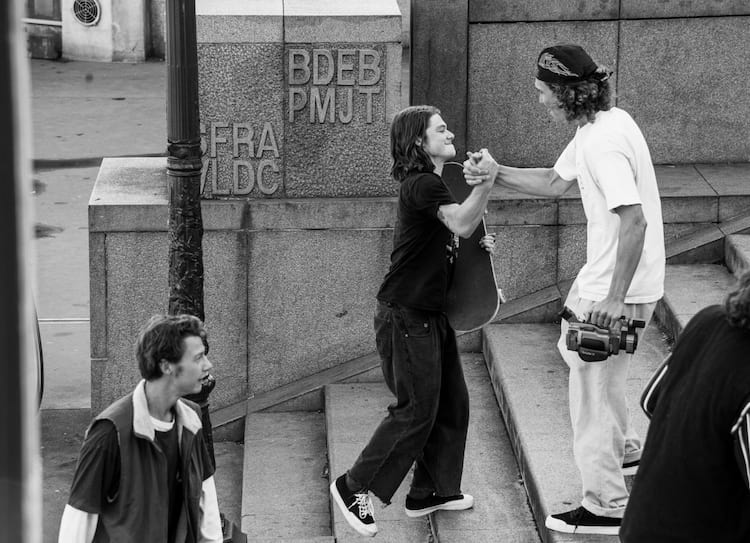 You’re moving out of your spot, right?

Where’d you move to?

In the gutter, down the street.

You with some other fools?

What’s up with your shoe?

That’s the first DC I ever seen pretty much that looks like that. So that’s good.

Do you know if kids are hyped on it?

Yep. Fuckin’ kids hit me up and shit. I just don’t really wanna advertise it in the interview.

You’re getting tatted up. Who’s doing your tats? Just random homies or you got someone who does all of them?

No, just random chicken scratches from the homies. 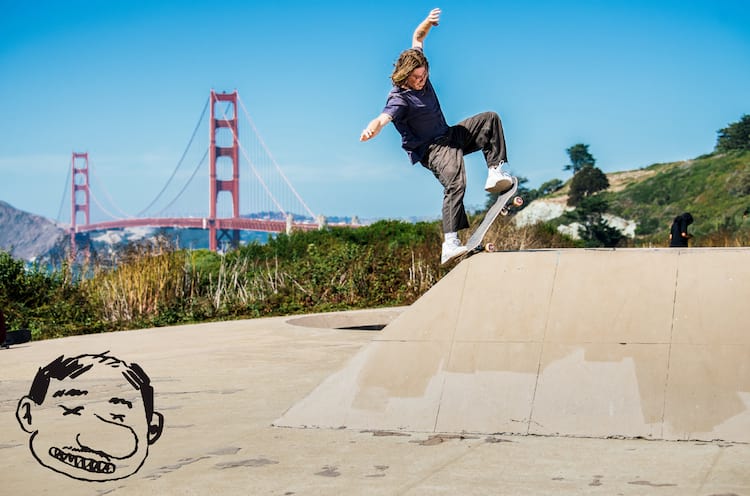 The most photographed thing on Earth. And some weird red bridge. One-eighty to fakie 5-0     Photo: Bram

What do you got? You got the double-headed skulls. That’s tight, with the candle. This one is the sickest—the yin yang with the tiger and the dragon. That shit is sick.

My homegirl fuckin’ Arabelle did that. Shout out Arabelle.

That one came out clean. What’s up with Zach? Zach’s got some pretty jacked tattoos, huh?

What’s up with Mighty? I didn’t even know that fool had, like, three kids.

Mighty’s a local from Pedlow and he’s a Pedlow prophecy.

Is he gonna have some tricks in the video?

Yeah, I think so.

How long you guys known Mighty?

Like ten years? Maybe longer. More than ten years. Fuck, met him when I was hella little.

How many bars have you guys been kicked out of and why?

I got kicked out of a couple of bars just for being underage and shit.

But now you’re of age, so now what? Now they can’t say shit.

No, they can. ’Cause they like to ban you for life. 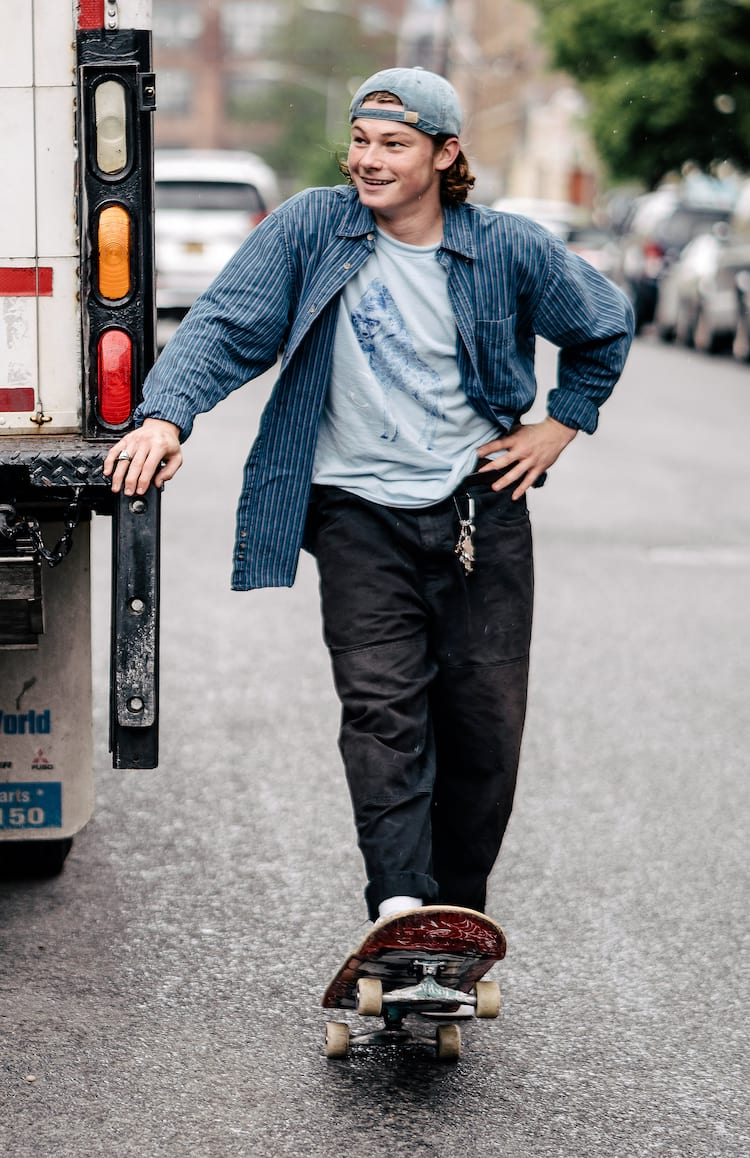 Why’d you guys get banned from Blue Mondays?

I was drinking underage and probably said some dumb shit to the bouncer too. Fuck Blue Mondays. Their DJ sucks.

Have you ever been to the Copper Bucket?

It’s on Wide Oak in your guys’ zone. How long have I known you? Since you were 16 or something, right?

Maybe before that ’cause I started rolling around when I was hella little. I was like 14 when they started giving me boards. I would go skate with Beagle and shit.

Then what’s up with your parents? They just let you hit the streets?

Like you could have just posted up at a friend’s house and shit and they’d be cool?

I would always stay at fuckin’ Doughnut’s house. Stay there all weekend ’cause those fools wouldn’t want to wait on me to go skate. Like, “Nah, just fuckin stay here,” so I’m like, “Alright.”

What was your first setup you were hyped on?

Probably some Toy Machine board that was way too big. It was like an 8.5” or some shit but it just had a sick graphic so I was like, “I want that one.” Then I got it and I couldn’t skate it at all ’cause that shit was so big.

Gap to slap, for all the sober kids in Africa

Damn, you were just hella little with the big-ass board?

What’s going on with your board shape right now? You, Zach and Kader are coming up with some-crazy ass shapes over at Baker. You find anything you like? You got one that you use all the time?

Yeah, it’s just a regular popsicle board. I was just fucking around skating a bunch of random shapes. The shit was fun, but I like skating a normal board more to be honest.

But it’s also sick when you do some shit on a fucked up, old-school looking board, right? You’re like, Damn, the nose is this big?

Fuckin’ look at Erick Winkowski skating big-ass rails on a little-ass board. His board has no nose and he’s doing fuckin’ 5-0s on 20 rails. I seen him nosegrind a rail on that board. That shit was fucked up.

That shit’s gnarly. Who are some of your favorite skaters right now?

Damn. Which brings up who do you think is gonna get Skater of the Year?

I mean, who else is there? Who else got some shit? Mark Suciu?

I think Milton’s got it.

That fool kickflipped into the car wash, dude. That fool’s gnarly, dude. What do you want to do after this video?

What would you tell these kids who are gonna watch the video and get hyped? 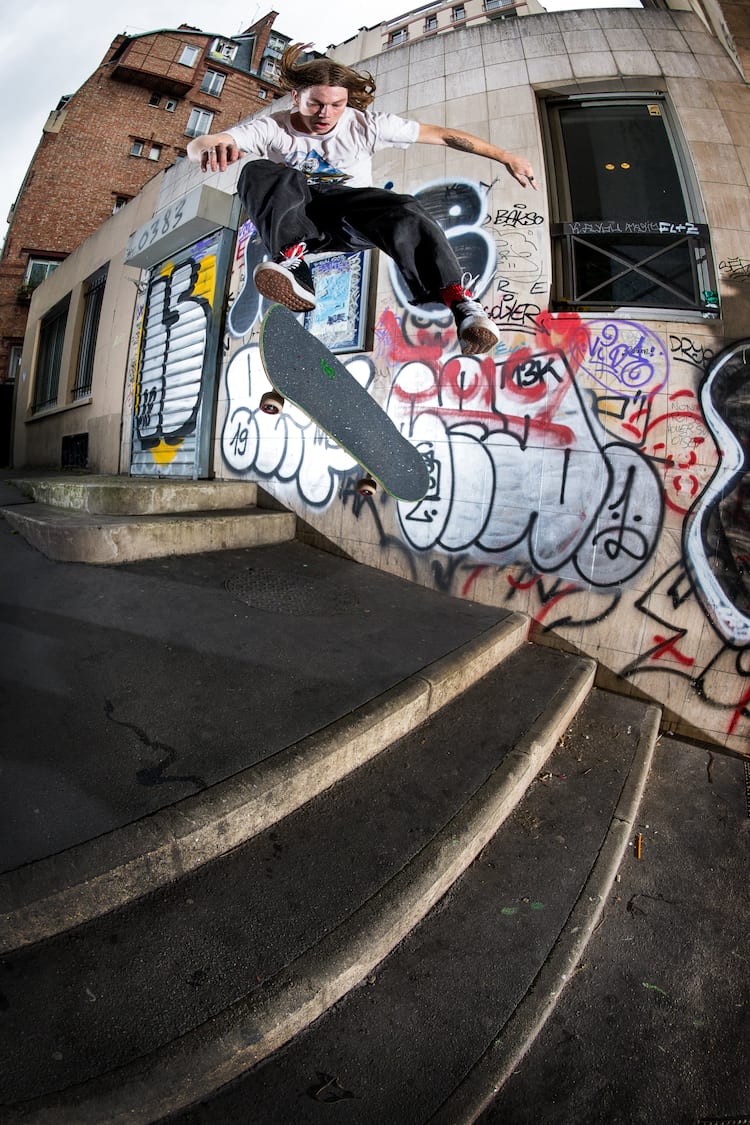