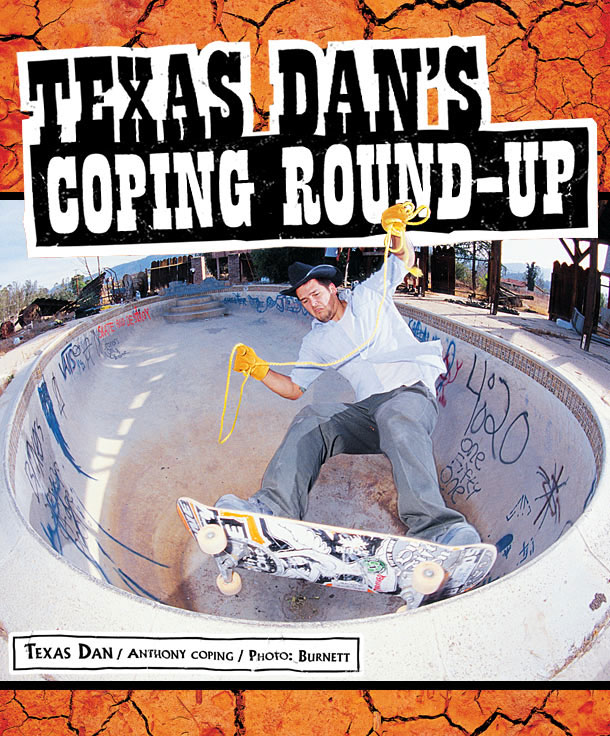 If you’re content farting around beneath the coping and not hitting tile (or even clearing the light!), then read no further. But if you’re down with the crunch then let  Ol’ Texas Dan school you on the science of pool coping. Each of these coping styles have a distinct feel to them and they bark at you differently. Now let's wrangle up some stoke... 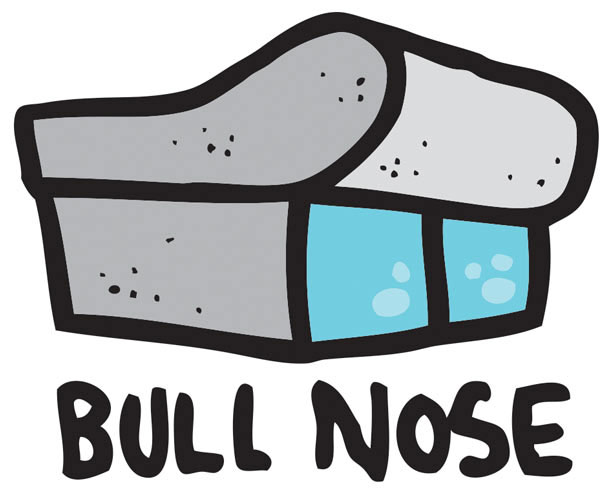 The Pemrose company in California has been growing this style for decades, making it your most widely used pool coping. Real popular with such pool builders as Blue Haven, Sunset, Blue Line and Hoams, it’s the lip you think of when you think of pool coping. 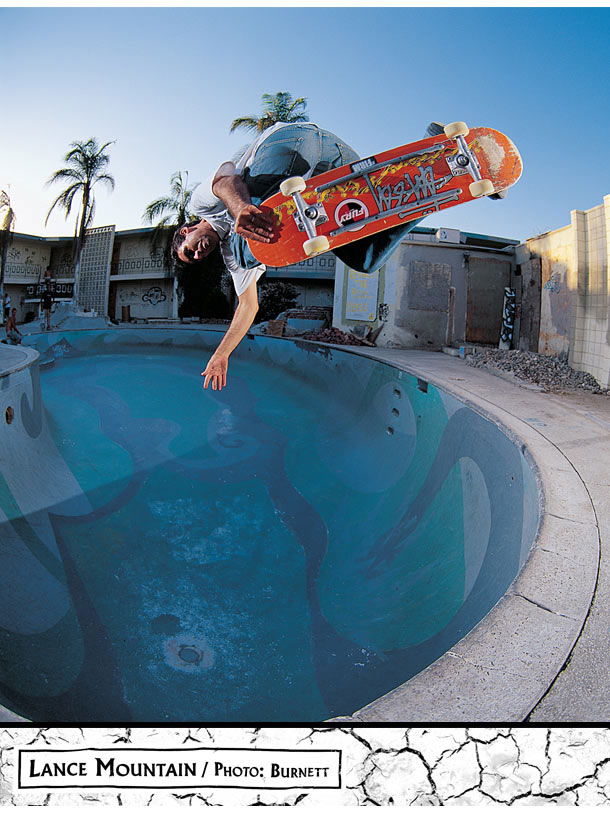 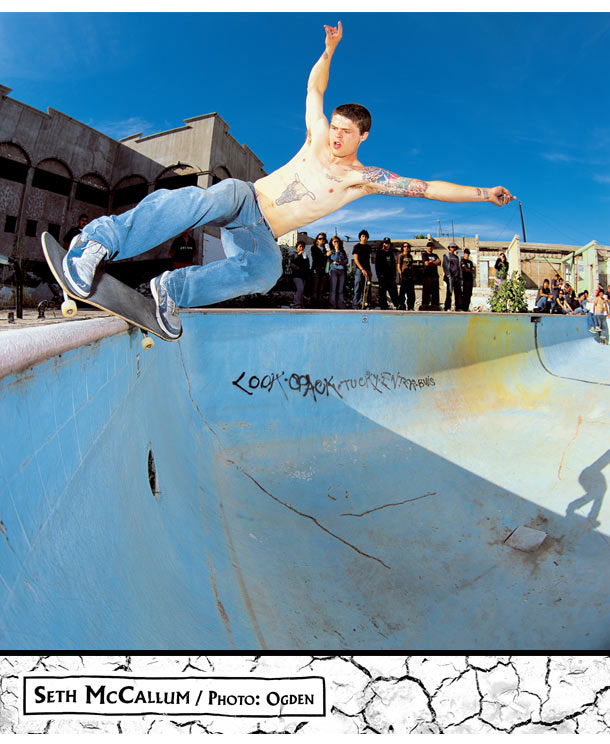 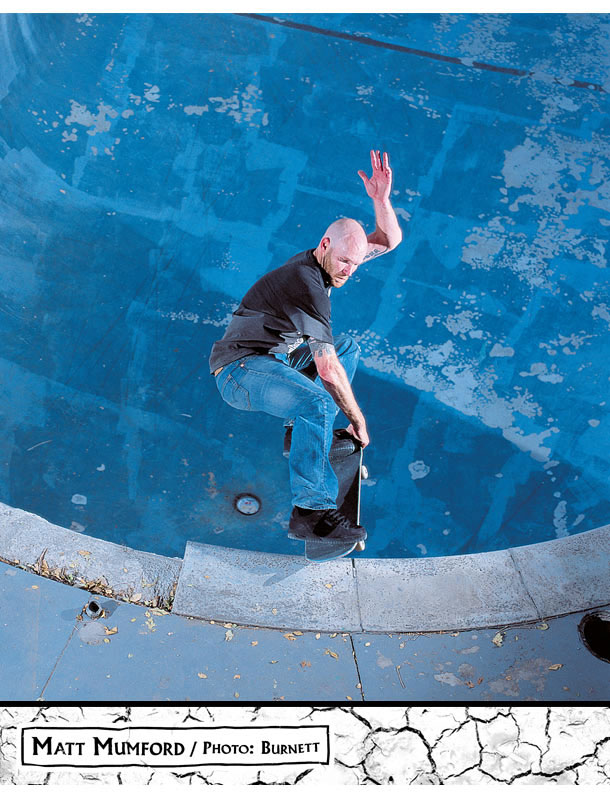 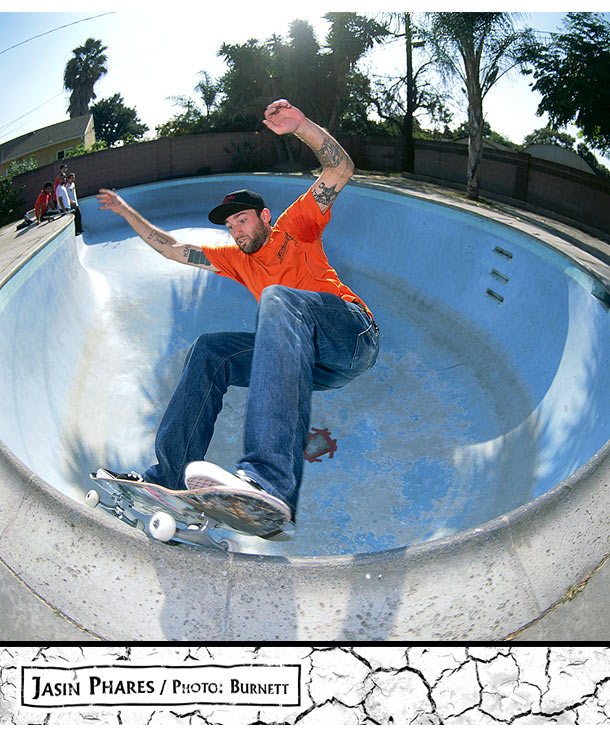 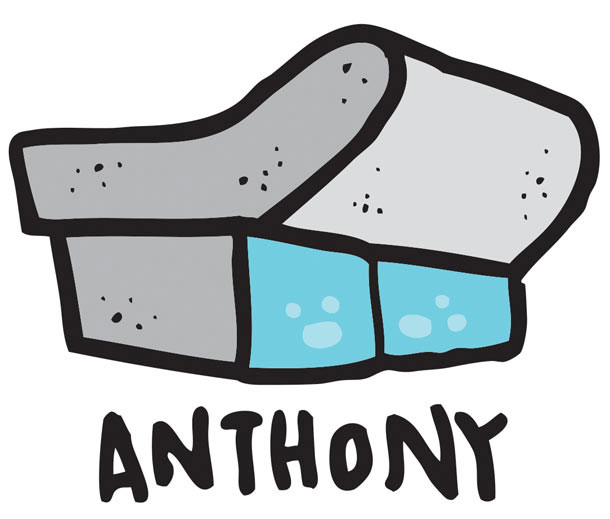 Anthony is a big lip—real fat like yer momma. You can hide a hamburger under there and it’s got a real satisfying grind. No Salba Sauce is gonna help you here; you gotta have some wiggly slappy trucks or wagon wheels to get ahold of this one. Real common in San Diego holes. 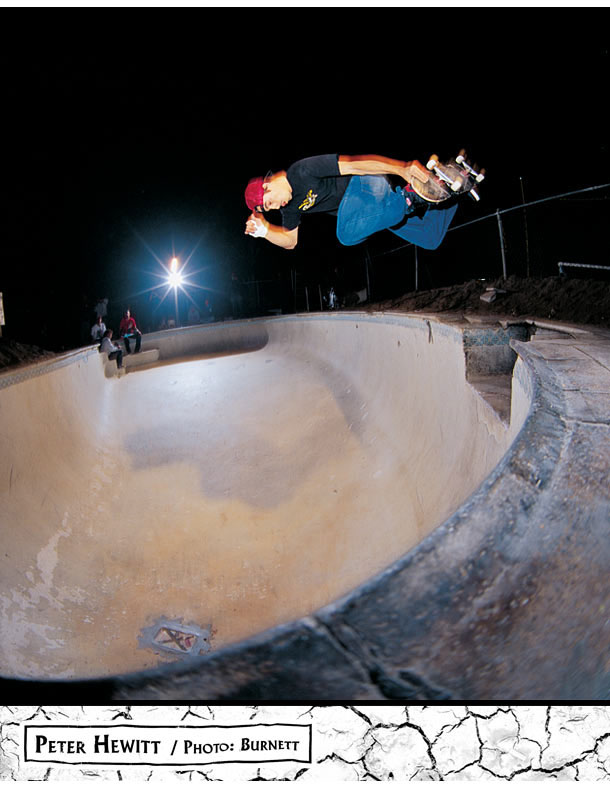 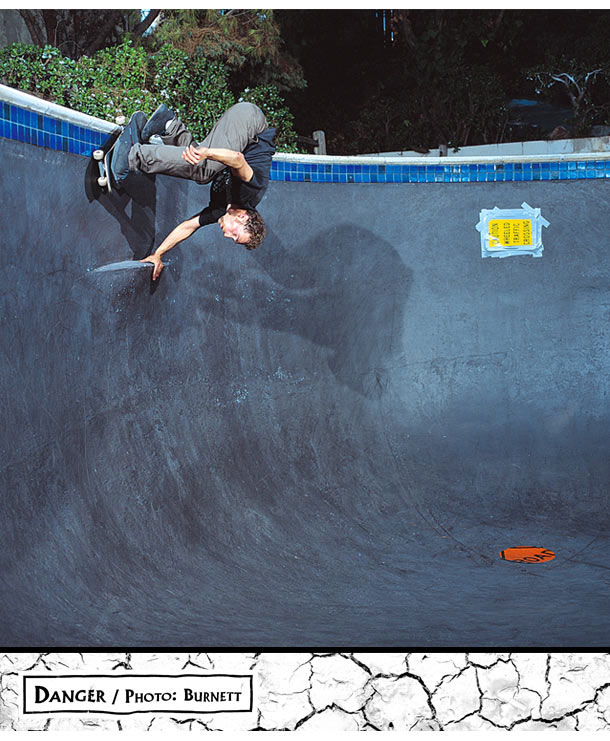 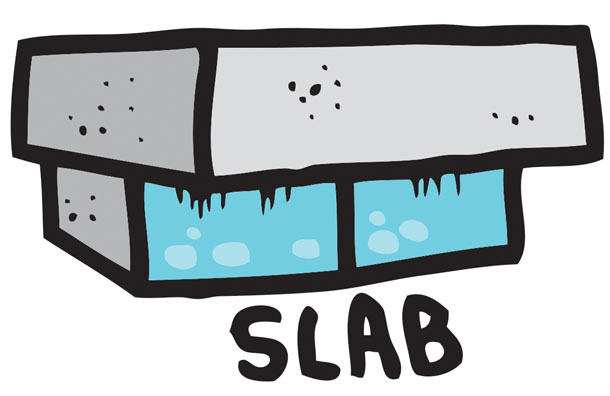 Slate rock that sticks straight out at a 90-degree angle, sometimes five inches or more. Either break it off with a hammer or have your surf/slash like Dave Hackett. 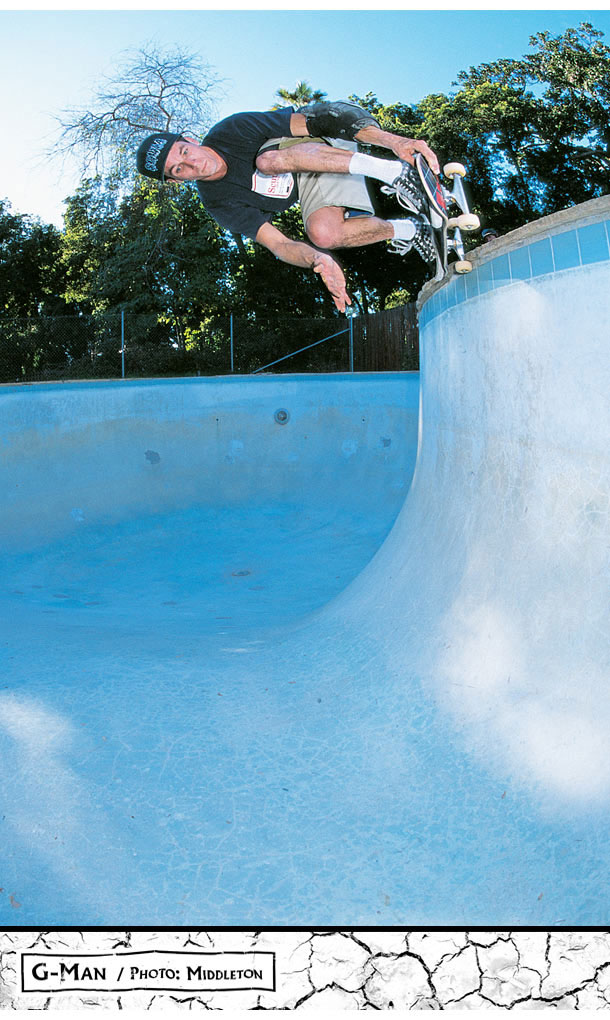 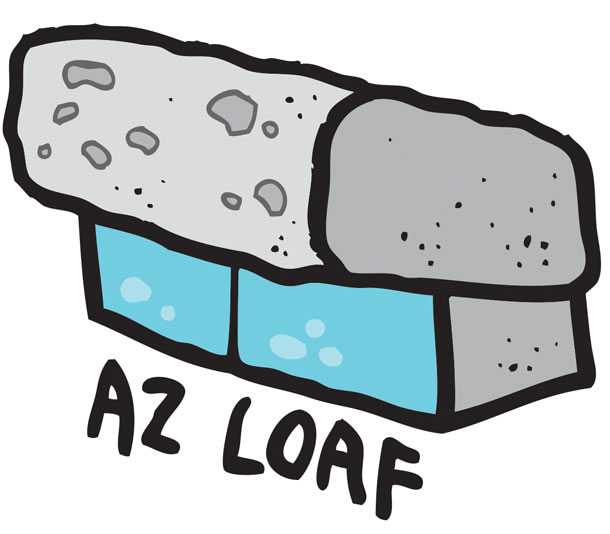 Also known as “Cool Deck” this coping looks like stucco meatloaf and is very popular in pools in the Grand Canyon state. Sticks out an inch in best-case-scenarios, but sometimes you can put your whole fist under there, in which case you might want to grab a rail if you expect to grind. Unless you’re Alan Midgett, that is. 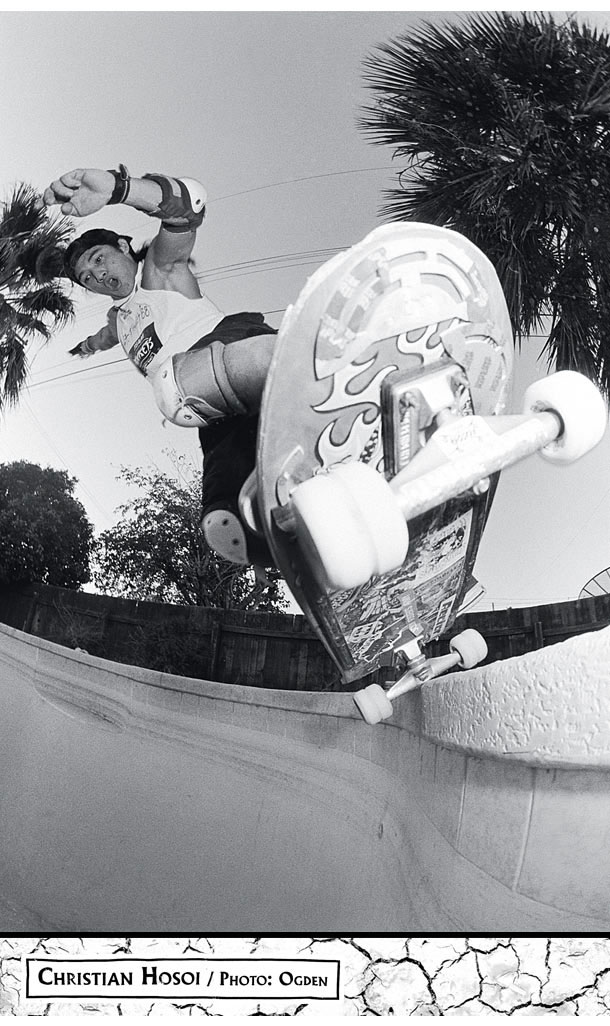 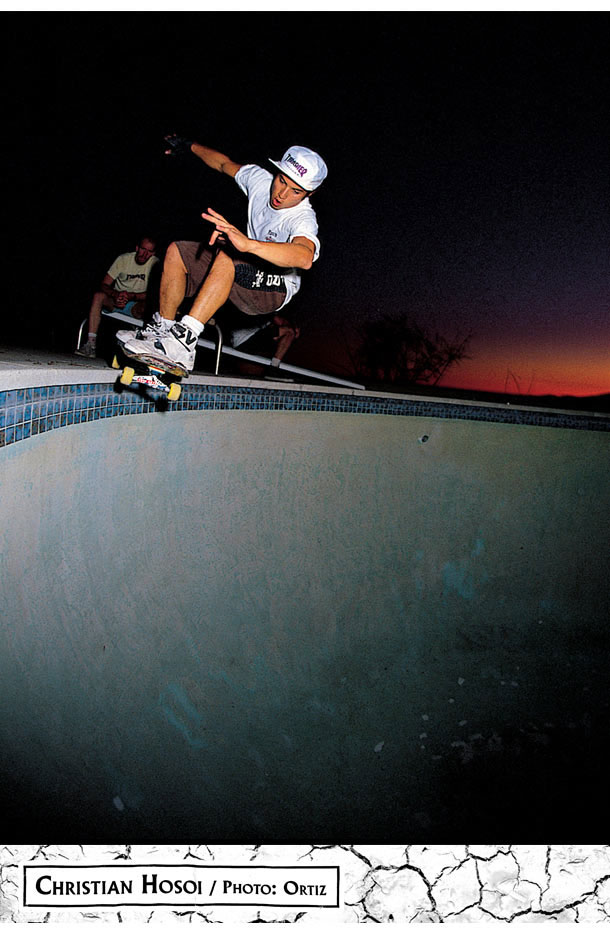 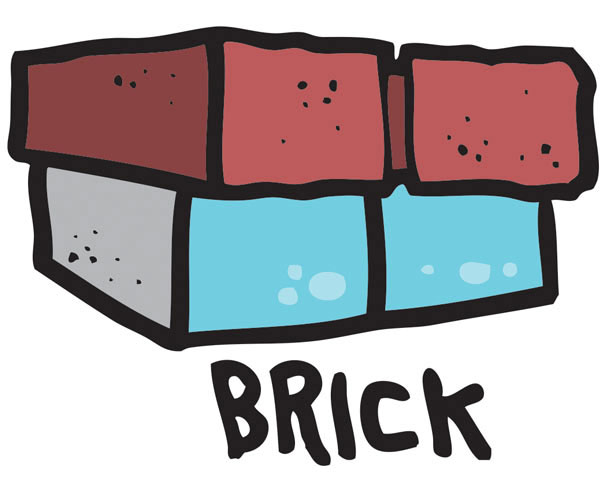 Although aesthetically pleasing, experienced pool hustlers know that brick can hurt ya. One false move and yer bucked off. It usually sticks out as much as AZ Loaf, but with the added hazard of mortar gaps between each brick that your kingpins get stuck in perfectly. 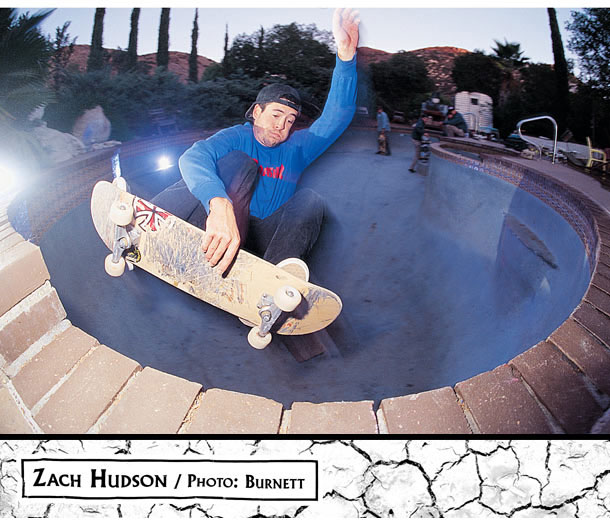 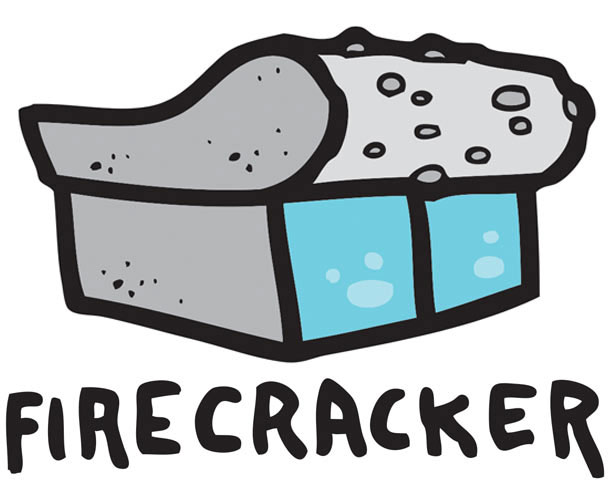 Basic bullnose but with river rocks or other pebbles added to the mix so it makes a cool crackling sound when you grind it. My personal favorite! 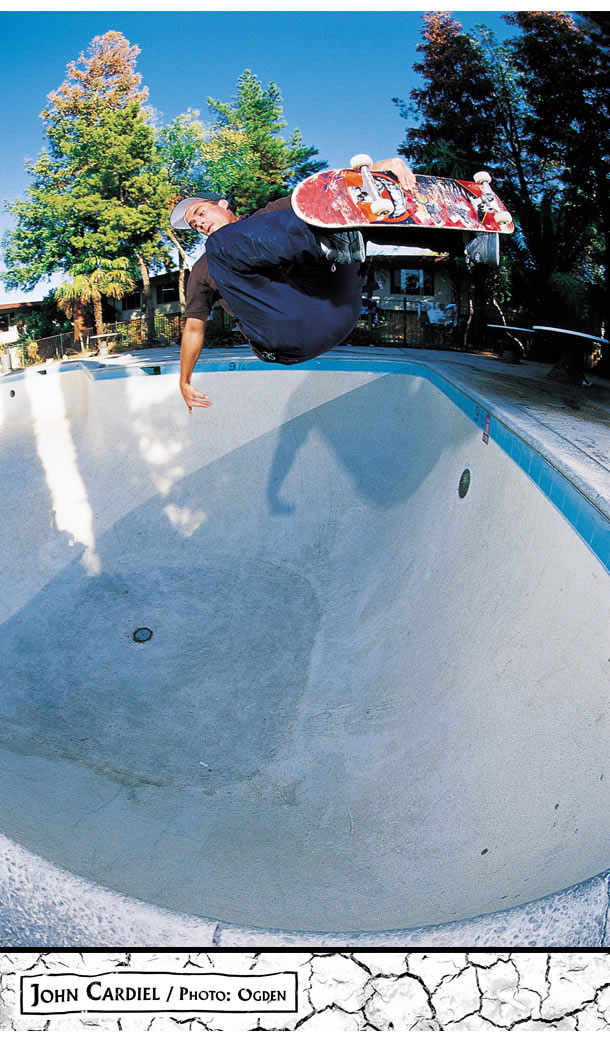 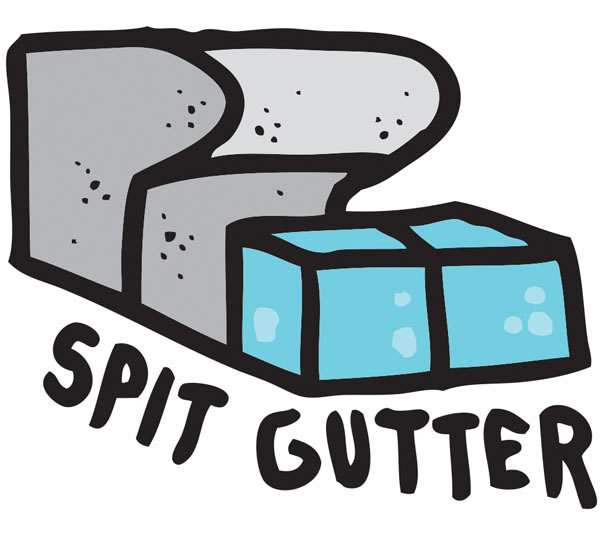 Also called Split Gutter by deaf and dumb fellas, this one is quite a unique edge. Half regular coping and half tile, the two are separated by an eight-inch gutter with the tile edge in front. Found on squares in every state, you can also spot the spit on fine round holes like SD’s infamous El Cortez. Folks say the gutter was actually used to spit in, but I don’t recommend spittin’ and swimming’. 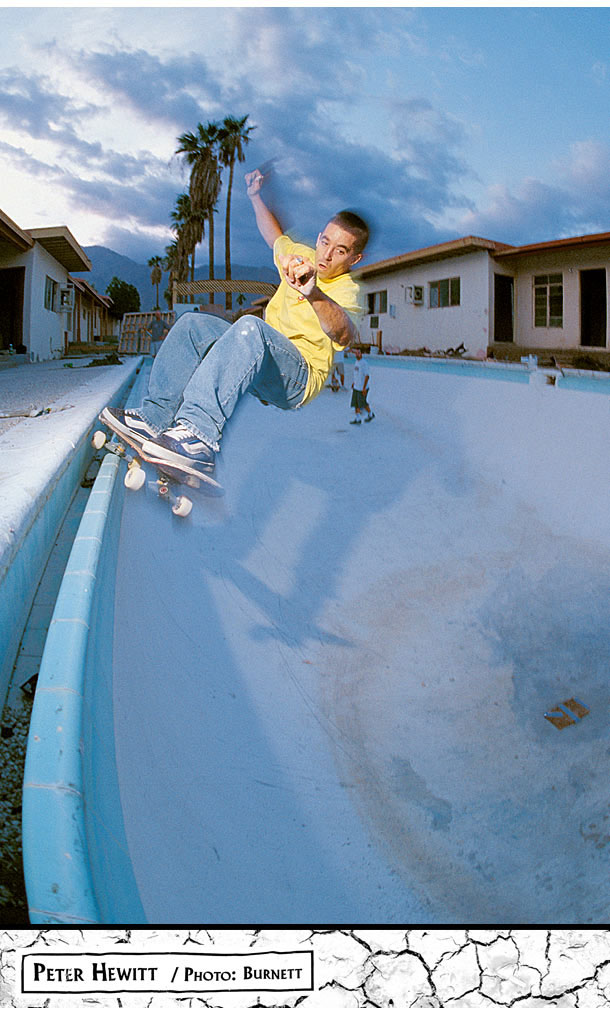 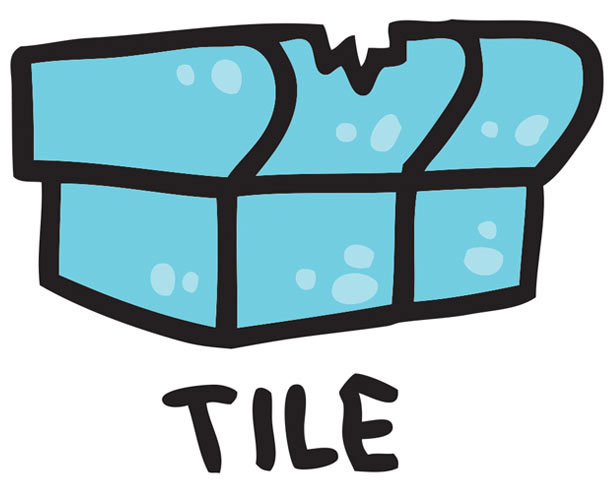 The Master pool company has this construction down. Similar to AZ Loaf but instead of soft, chalky stucco that’ll stop any bandito in his tracks, it’s got a curved slippery tile face that’s almost too easy to grind and slide. After heavy sessioning, the tile breaks apart, leaving a sharp concrete and tile edge that’ll send your pussy-ass to the hospital for stitches. 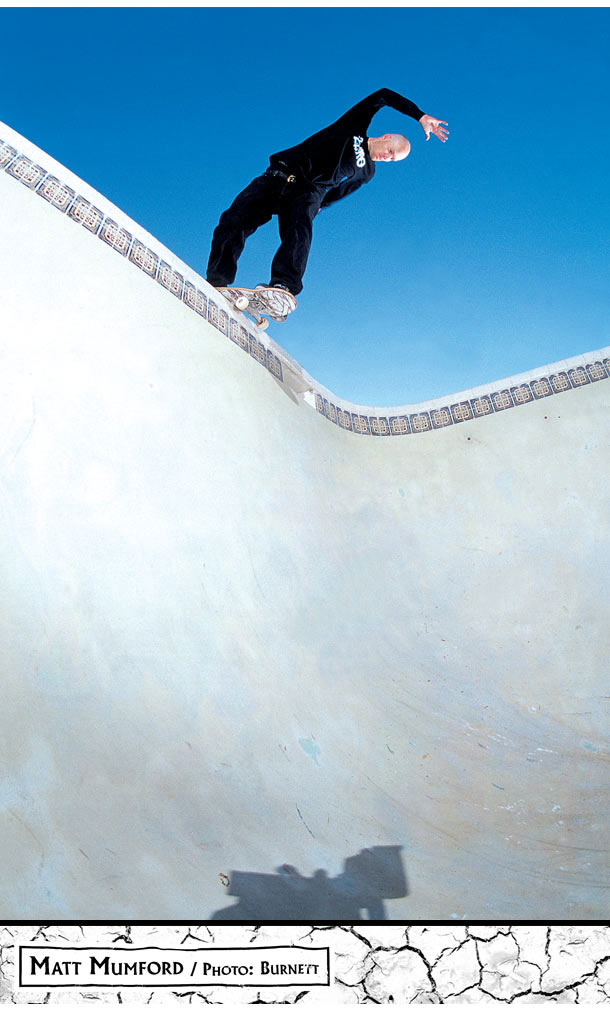 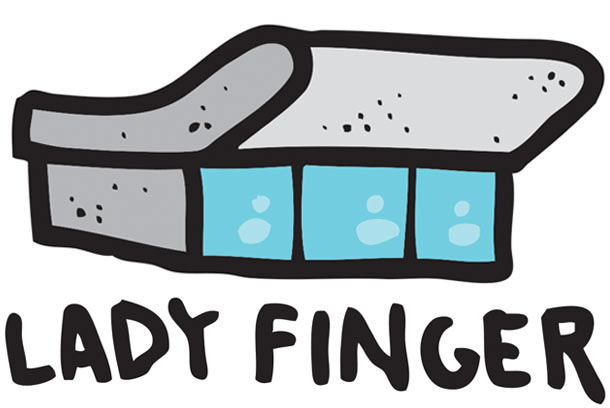 Another one of my favorites. She’s dainty and thin but makes a high-pitched growl when you get on top of her. Looks like Anthony Jr’s little sister. 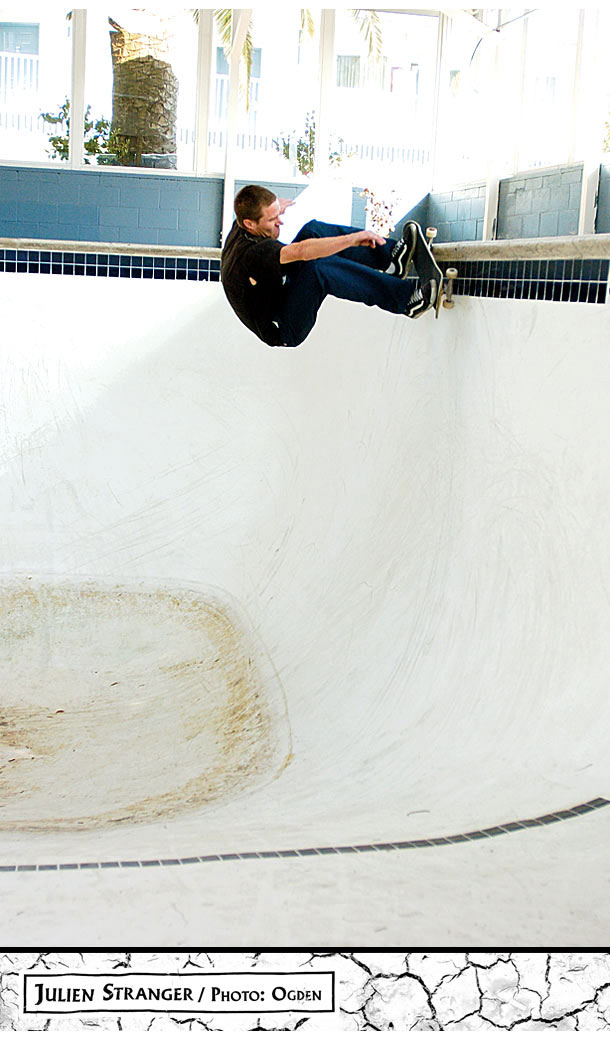 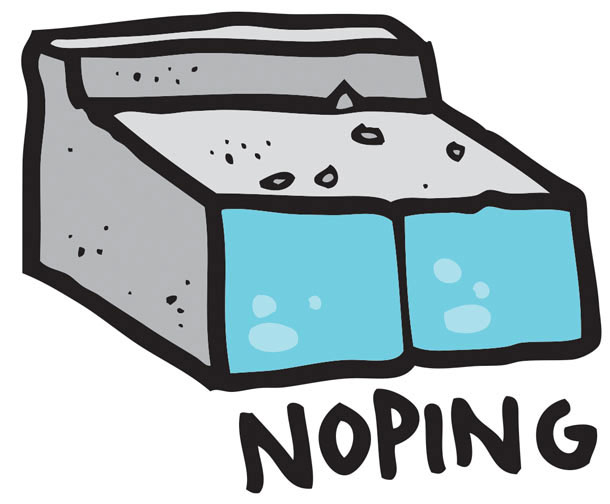 A 90-degree edge, either because the pool is so old that it never had coping to begin with (like Cambridge) or the coping has been hacked off.  In the second case, beware of broken tiles unless you want to end up like Aaron “Fingers” Murray on a layback grind! 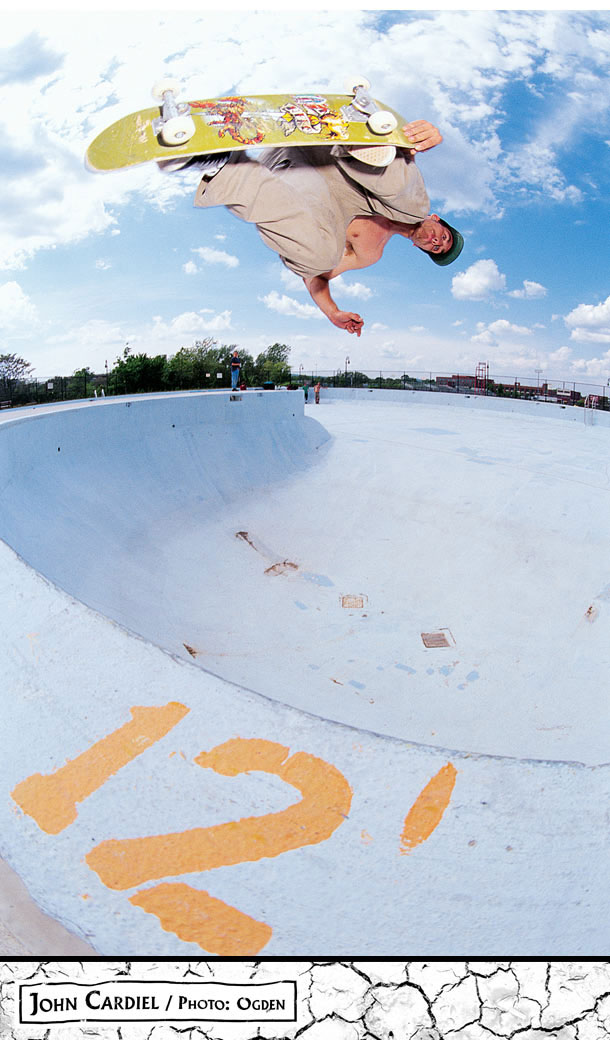 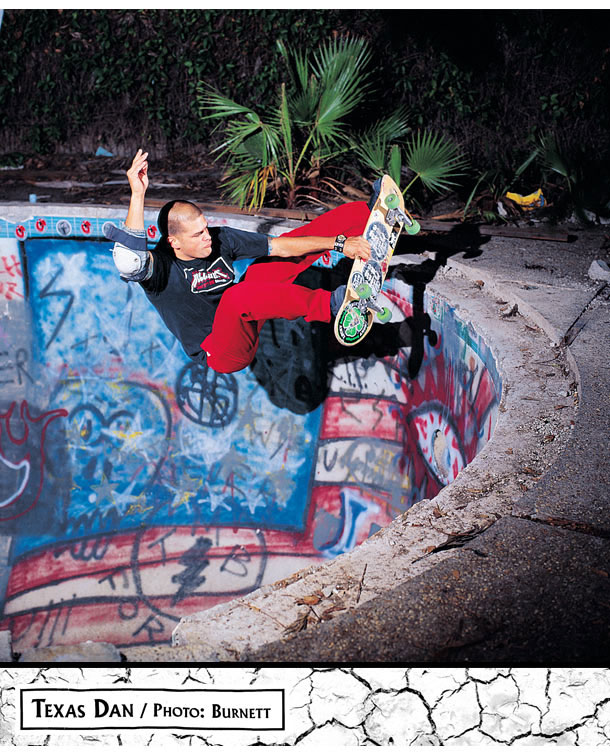