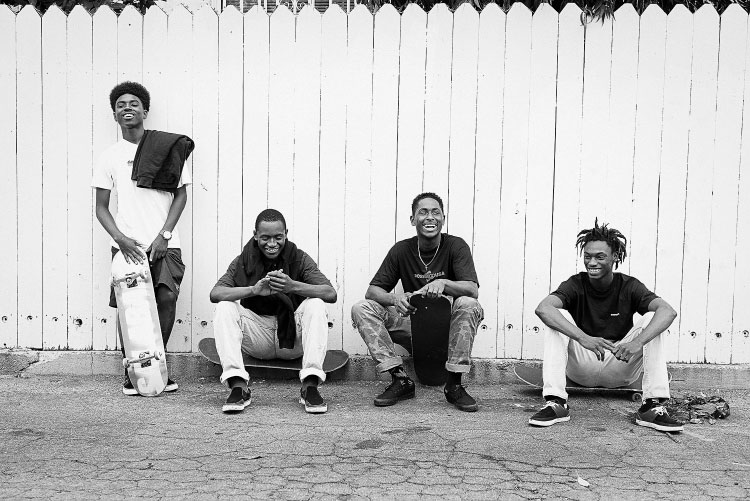 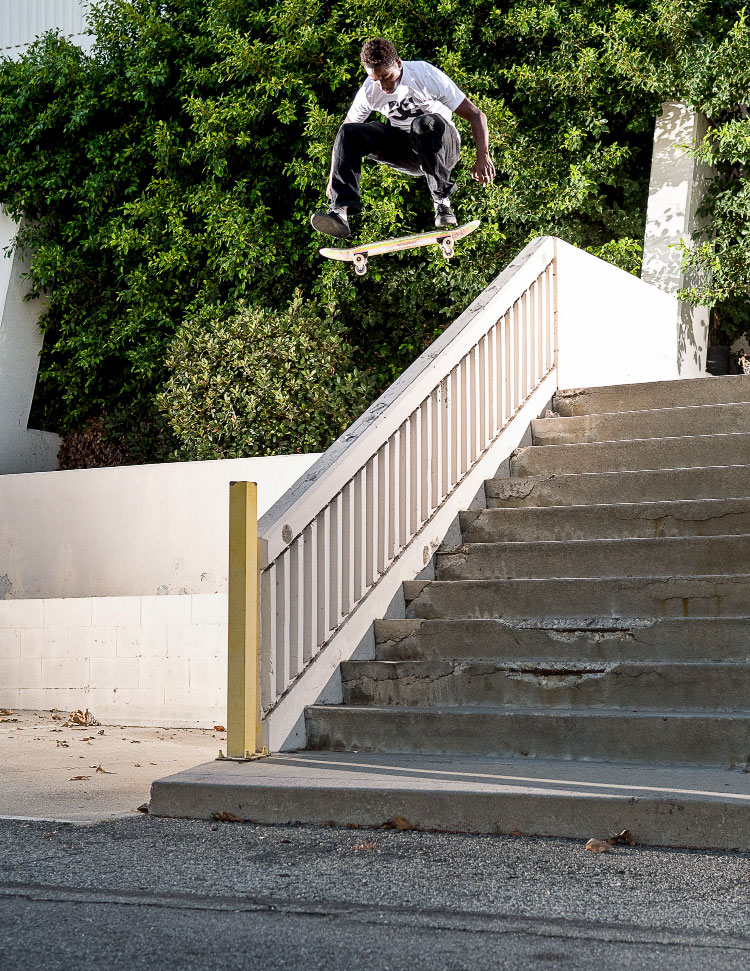 How’d you find your friends skating?
I don’t know. The same way anybody else finds their friends skating. They just go to the skatepark. You think they dope and then they think you tight so then you’re bound to become homies.

What is Cavi Club?
I can tell you what it is to me: the Cavi Club is just about me and my homies that skate together. These companies didn’t want us at first; they didn’t like us at first. They didn’t want to put us in their videos or nothing so we just started doing our own thing. We’re all just a bunch of homies that believe in ourselves, you know? We got each other’s backs if anything.

Where did the idea originally come from?
The idea originally came from when we wanted to be in the Gold video but they wouldn’t use no flow kids, so we just made our own video. Then that was that. It’s more than that but I ain’t gonna go into depth.

Who does all the art for it?
We ain’t really went crazy with art, man. But it’s just like we think of designs and then our homie Snake Brain put it together on the computer for us. But it’s not really nothing crazy. We haven’t even given him an idea to really let him show his work yet. But it’s coming soon.

Who’s a part of the Cavi Club?
It’s me, Hakeem Ducksworth, Derrell Carey, Ashton Hudson, Davonte Jolly and Berronte Ramirez. But we’ll be having a new member coming soon. 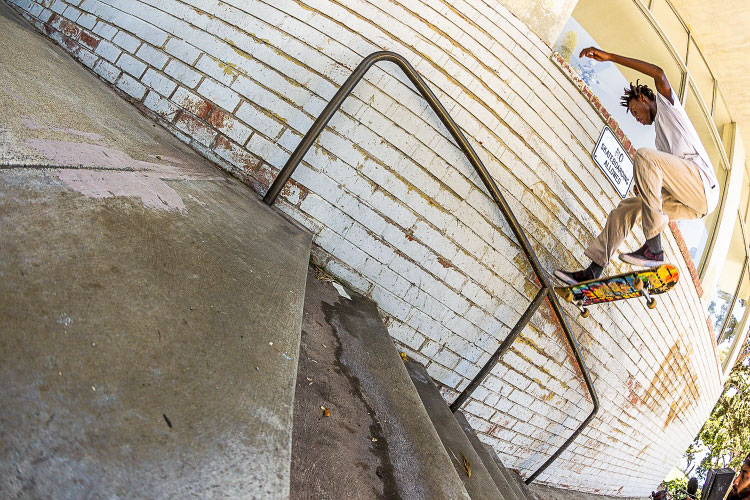 Does everyone ride for DC?
No, I’m actually the only one that skates for DC, like, really, really.

So does that mean you’re fully on?
Yeah, but they’re gonna put Derrell on in November. But the rest of them are just flow. They don’t really skate for them.

Who surprises you the most when you guys skate together?
They all surprise me. The dude who surprises me the most, though, is Derrell. When we could already do tricks and skate rails, he couldn’t do nothing. It’s crazy to see. We all do some tricks but this nigga couldn’t do shit and now he’s just beast as fuck, so he surprised me the most. That nigga is crazy. Anybody can tell you—he surprised everybody the most because he really could not skate at first. Now he’s just beast.

Did you notice a point where he started getting really good?
The point I realized he was getting good is when it would be hot and we’d be being bitches and not wanna go skate. He’d be at the skatepark killing it and learning tricks. Then when we’d finally go to the park, this nigga just got way more tricks than us and we’re wondering why. We noticed that probably, like, three years ago. He was weak three years ago. He couldn’t even kickflip a five stair. 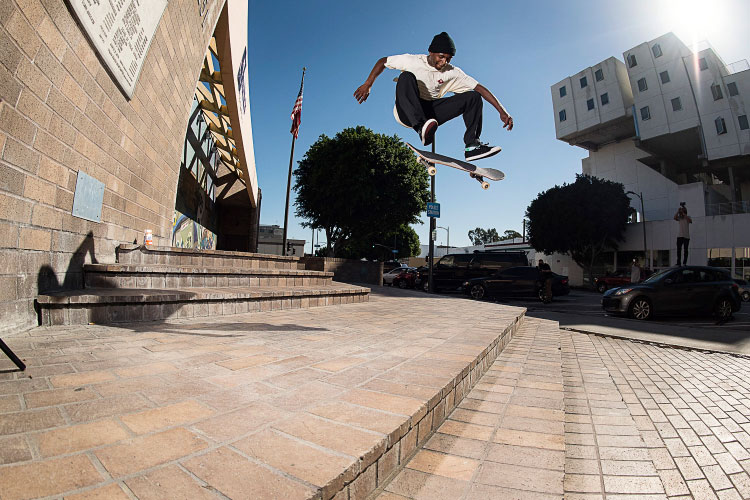 Sir! Get off my car!" Derrell switch frontside flips while the filmer gets the auto angle. Cavi Club kills it     Photo: Blabac

That’s crazy. So, for him, he doesn’t have talent he has hard work. He puts in all the work.
It went from hard work to it being easy for him. Now it’s just talent. I guess he just turned into a beast.

What was your favorite thing you saw landed in person?
Hakeem’s wallride. He was not getting nowhere near close. He didn’t even know how to do that trick but he just went there, like, “Alright, I want to try this.” He was not getting close at all. Like, you don’t even understand—not at all. He would be about to die and then want to try it again.

It's like he powerslides on the wall.
Yeah, that was the coolest thing I’ve seen in person. 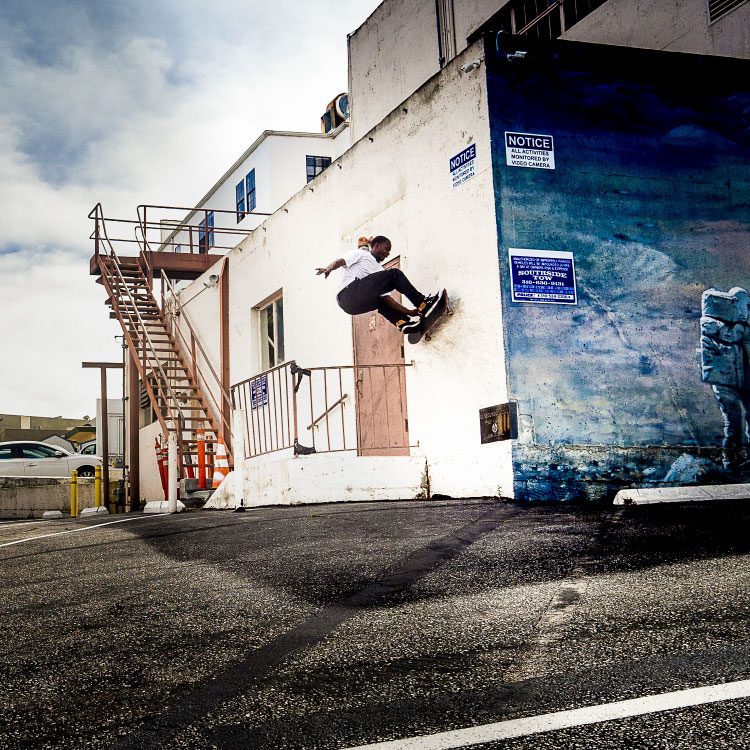 How long you been getting DC shoes for?
Probably, like, five years.

How did that happen?
Berronte was the first kid out of us to get hooked up by DC. Then there was this year that they hosted the Berrics game of SKATE and we were all there skating. Kalis was all hyped and said they should put the whole squad on. Then he just started hooking me up, you know? So that’s how it went, thanks to Berronte.

That’s good. That’s how it should be. Do you have a board sponsor?
Yeah, I skate for Illegal Civilization.

What is Illegal Civilization?
Illegal Civ is my friend Mikey’s board company through Baker distribution. I fuck with them. It’s like skating with my homies every day. That’s why I skate for them. Stay with your friends; that’s how I look at it.

Who’s all on Illegal Civ? Who’s out skating from Illegal Civ with Cavi Club?
Right now, me, Ryder McLaughlin and Zach Saraceno are flow for Illegal Civ. Olan Prenatt and Kevin Blanco are amateur.

No pros yet, though?
No pros yet. Maybe after IC3. We’ll see.

Back to DC. Do you know what DC stands for?
Droors Clothing. I mean, that’s what it did stand for.

That’s tight you knew that. How’d you find that one out?
I actually found that one out from Davonte. Davonte Jolly, the dude that we film with. I mean, I had no idea. I probably learned that, like, two-and-a-half years ago. I didn’t know what the fuck it meant before that. I thought it was just DC.

I just found out the other day. I always heard DC was Danny and Colin.
Yeah, Dyrdek Company—I’ve heard all types of shit. 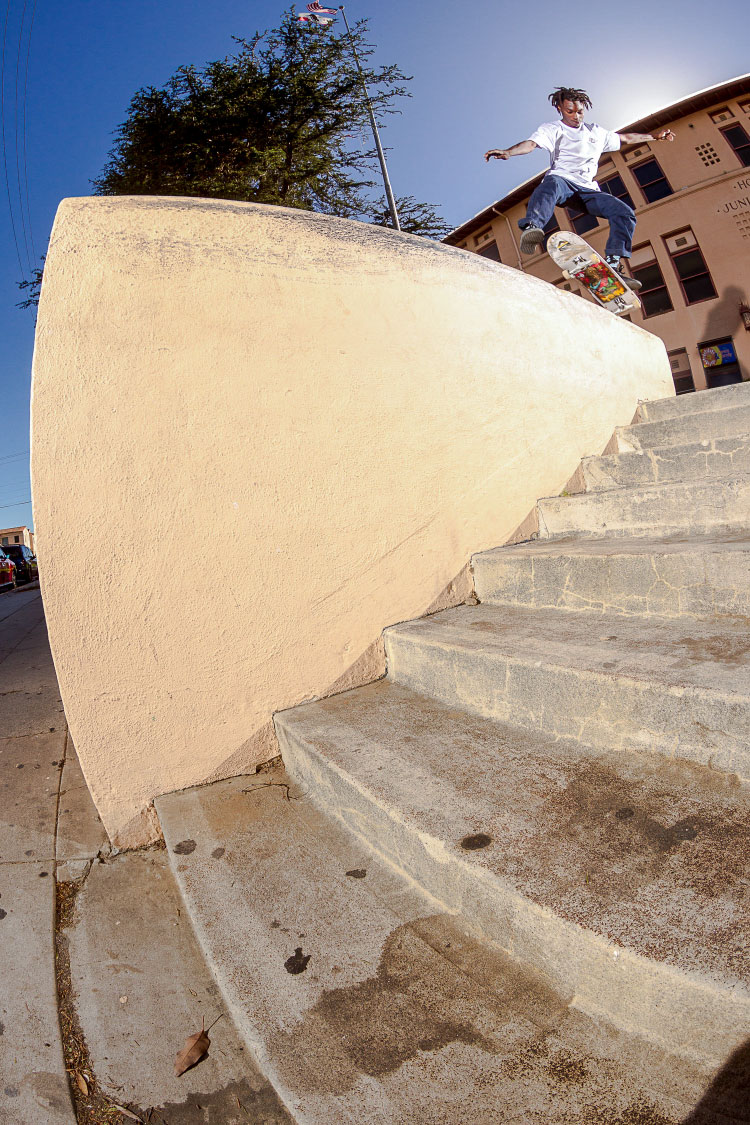 Does DC stand for Derrell Crushes? Kickflip to 5-0 for the Club     Photo: Broach

How did the whole Cavi Club and DC collaboration come about? How did that video become a Cavi Club thing rather than just you and Berronte?
I was on DC and I guess they were gonna do a welcome-to-the team type thing. I don’t know how it came along exactly, but we just thought of the idea of doing a whole DC/Cavi collab 'cause those my niggas. I think they just fuck with us, so we just did it. Hakeem didn’t start skating for DC until May, so he’s fresh. But they definitely thought we was all cool. That was tight.

Is there a collection that came out with it or is it just the video?
No, it’s just the video. Hopefully if they read this interview—that would be sick if we can get a colorway. DC, give us a colorway, please.

How long did you film for this video?
We already had clips but then the idea of the DC/Cavi thing came along around six months ago. So really Hakeem didn’t start filming until then. He got all his shit done in, like, six months. But we already had clips; we didn’t really have to do too much. We still have enough to make another Cavi video or something. The DC Promo Video is coming up so—

You gonna have some clips in that?
It’s just a promo video; it’s gonna have everybody’s clips.

Are you proud of how it came out?
Hell yeah. I’m proud of everybody. I know they’re proud of me as well.

Who filmed and edited it?
We already had clips with Davonte. We had filmed stuff with Chris Ray and Massimo Legittimo. Massimo edited the video and he made that shit tight as fuck. I thought of the song. We were trying to come up with a song and I feel like that fit perfect. But he made it come to life.

Did you have to get music rights for it?
I don’t know what they did. That’s out of my league. I think they did, though.

Is there anything that you tried that got away from you?
Hell yeah, a lot of tricks. I was trying to hardflip this gap a long time ago. Evan Smith had a frontside flip ad on it and I really wanted to do it. But it don’t matter; we got more shit coming. It’s just more to work on after.

What took you the longest to land?
I really don’t even know. All the tricks that took me the longest I just blank out and I don’t even remember how long it actually took. 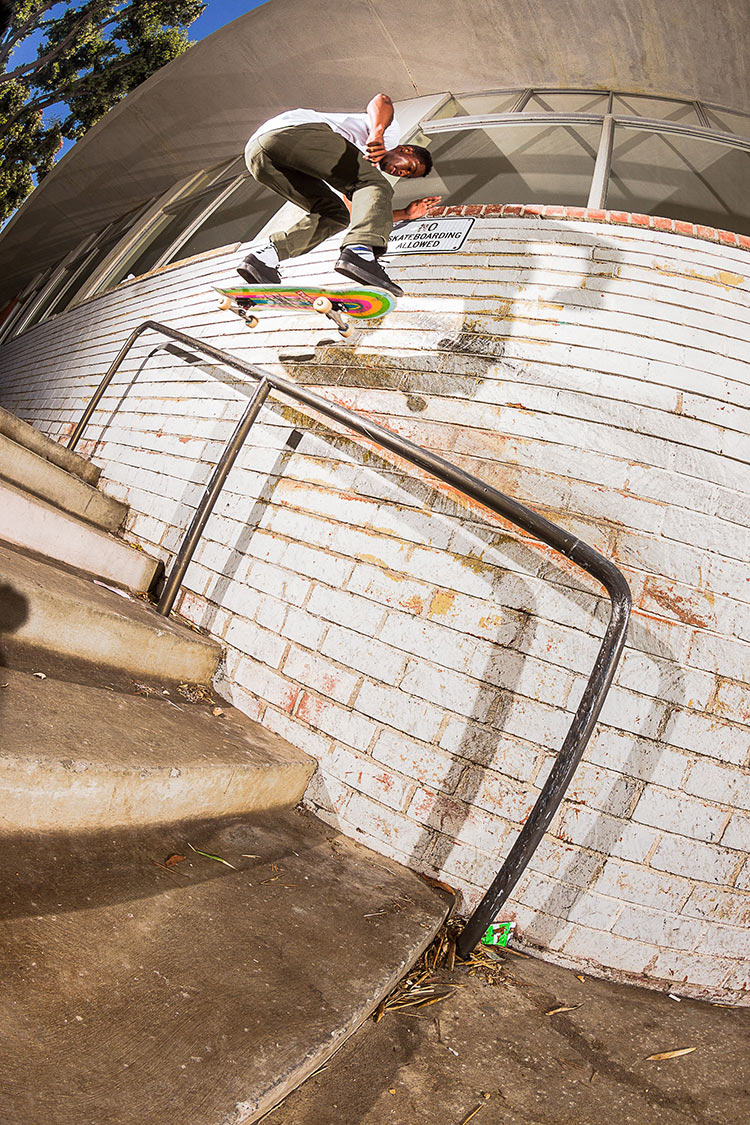 What’s next for you and Cavi Club?
We gonna make a new video—our shit.

Do you have a plan for Cavi Club? Would you like to turn it into a clothing brand or something? Or do you want to keep it as just a friends' thing?
Whatever comes is gonna be what it becomes but it will always be friends. Whether we go million-dollar company or not. Whatever we do it’s just the homies, you know? But hell yeah, why wouldn’t I want the world to know about us? It’s not like I’m straight core. Hell yeah I want it to be big. I want everybody to know our story too. I want everybody to know we ain’t no privileged ass kids. Our parents didn’t buy us skateboards. We didn’t have it easy like a lot of people did. So to have a company like DC make a video with us is a dream for all of us. 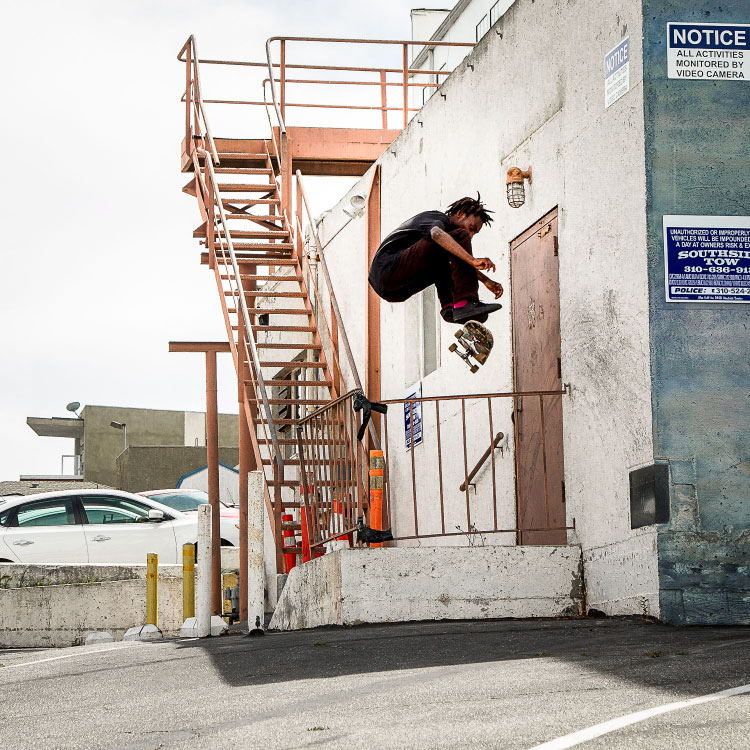 All those solo sessions at the park paid off. Derrell, definitely not a weak kickflip     Photo: Broach 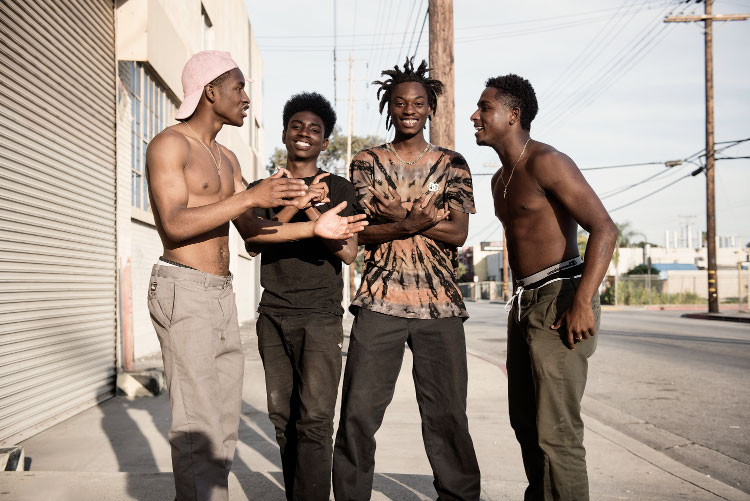