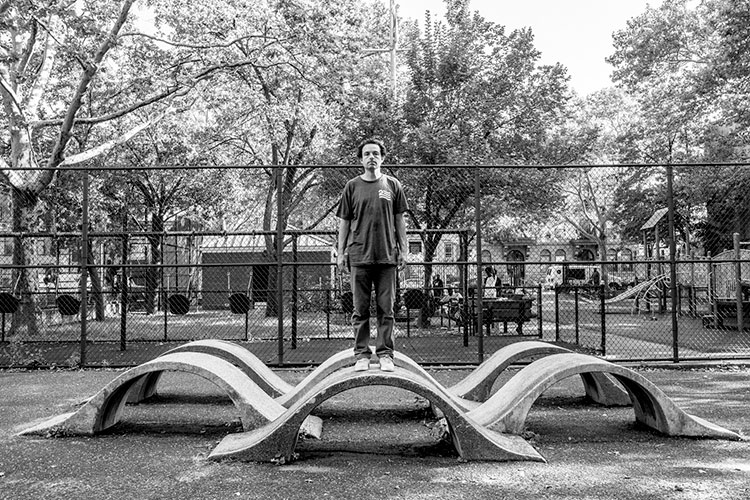 Being 39 and keeping the motivation seems to be very hard for most skaters. What’s your secret?
No wife, no kids, no career keeps a man healthy, wealthy and wise. 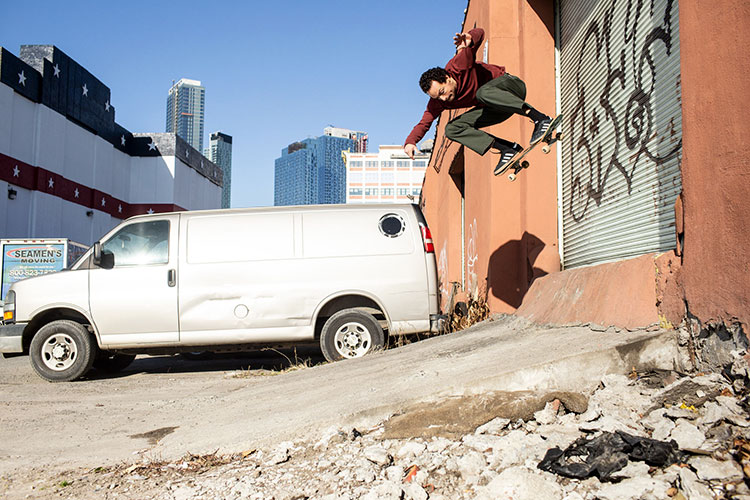 This gem is complete crust. Dave managed to pull this backside ollie with no run up, semi trucks driving through and really dusty wind gusts blowing

For as long as you’ve lived in NYC, I’ve noticed that spot selection has always been your strong point. How does one constantly go on wild-goose chases for new spots?
Yeah, the goose chase for spots happens sometimes. But some days you find multiple spots or one really good architectural anomaly that’s completely different from any other street spot and then it’s all worth it. Even on the goose chases, you still get to know the neighborhood you’re sussing out a little bit—maybe you eat some good food there, have a chat with some locals or buy a random mesh all-over animal print button-up shirt from a mess of a clothing store. It’s not all about finding skate spots, necessarily. 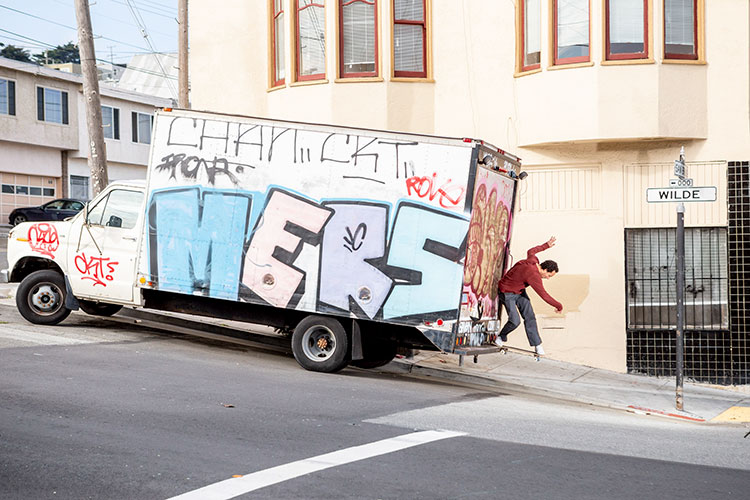 Two days of filming in SF and no cookie-cutters. Backside tailslide

Since you moved here back in 2004, I know you’ve always had a thing for exploring the Bronx. Describe the feeling of the Bronx in 2018.
Yeah, the Bronx is definitely my favorite borough to explore. The Bronx has a different vibe than the rest of New York. It’s more laid back. Hard to say exactly why, but I think it has something to do with the Bronx having a lot of immigrants from outside the mainland US, and also generations of people who have lived in the Bronx. The rest of the boroughs, excluding Staten Island, have had so many regular Americans move into the neighborhoods, spreading the disease of uptight suburbanites. The average mainland American is just more concerned about the use of private and public property. I’m excluding skaters when I say this. Maybe I’m wrong, but I like my theory. But back to the BX. The Bronx has Bronx hospitality, and I think the average person in the Bronx is more socially advanced. For example, one of the first times I went to the Bronx I was with eight or nine friends; we were skating around a neighborhood and hiked up to the top of a park to see if there was anything to skate. When we got to the top, we happened to interrupt a couple that was smoking weed and making out at the secluded spot. Instead of the situation being awkward, we ended up just shooting the shit with them, rolled up a joint ourselves and we all smoked weed and hung out for a few. We also realized that, for the most part, you could drink beers without hassle from the cops. At that time in Manhattan, northern Brooklyn and some parts of Queens, you would get a $25 drinking-in-public ticket within minutes of cracking your brown-bagged beer—not in the Bronx, though. As far as the Bronx in 2018 goes, it’s still just as good, if not better. The platform with the weird curl-to-cellar-door is in the Bronx. I nose wheelied into it in this skate part. It’s at a bodega. The bodega owners don’t give a fuck; they don’t say a word. Nobody walking by or into the store says anything negative, but they might say something positive or stop and watch for a few and chat. But that’s it. Skating a cellar door in places usually causes an uproar from locals and business owners. The Bronx is hilly in some parts. There are old neighborhoods still kept in tact. There are huge swaths of industrial areas that have their own unique character. I could go on and on about the Bronx. But yeah, I love it. I’ll leave it at that. 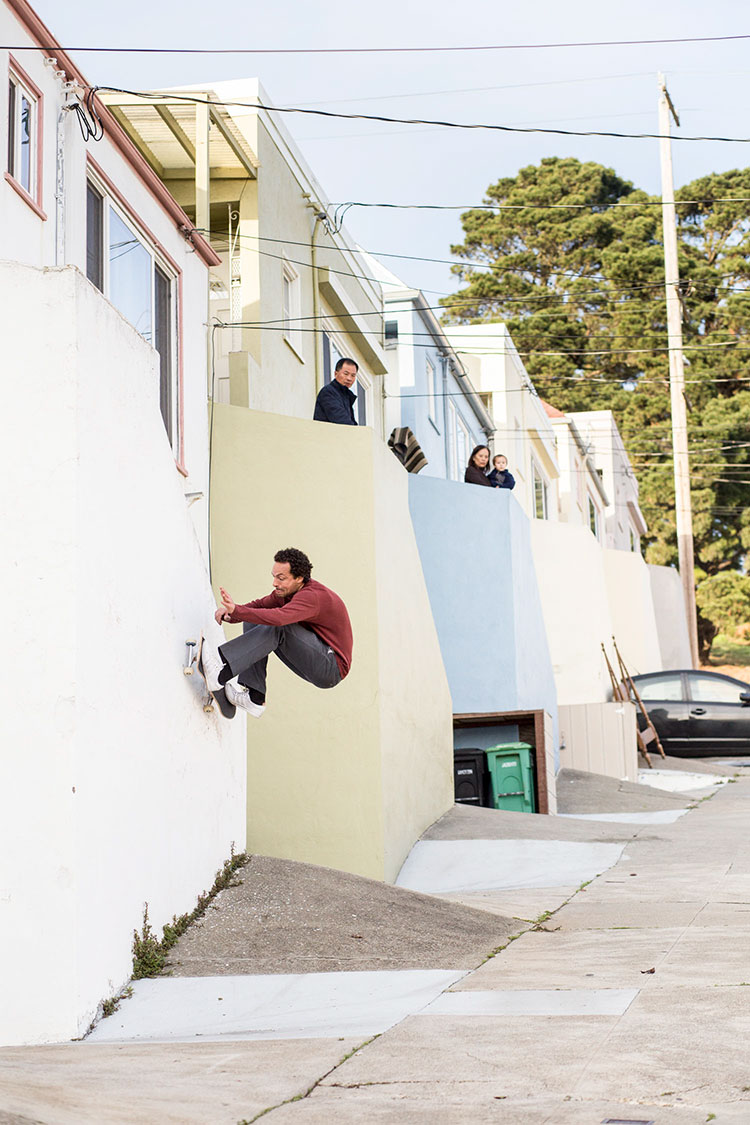 Dave left the Bronx for the hills (and walls) of SF

How do you feel about pros that come to NYC and get carted around to the same ol’ spots, when they could be paying a day rate to have someone show them the gems?
Even if I’m the guide, I feel bad for any skater traveling to a city just to get carted around by a guide. It’s cool to meet up with the locals and skate and hang out. A bit of carting is useful because there definitely are dead zones of skate spots in cities, but if you know some general areas that are good to skate in a city, I feel like that’s all a skater should need. Once you have that, you search the area yourself or with your crew and that gives the skating a unique look and feel. So many skate videos look bland and the same because often when we skaters travel, what we end up skating is what we see in a video from that city or what the local guide takes us to. That’s cool, but I think skateboarding as a whole takes for granted every skater’s unique outlook on street spots. Instead, we pigeonhole ourselves into skating the same spots over and over again, even when we do travel. Skaters go to China and they skate what they saw in a Lakai video. It’s the same in Barcelona or wherever. Full travel budgets are spent on cookie-cutter spots in far away places. NYC gets cookie-cut all the time: Columbus Park, downtown Manhattan, LES Park—there’s a whole list. A professional skater or skate team that comes to NYC on a company's dime will be on a schedule to make an NYC marketing/promotional video that will align their brand with urban city skating. The skater, or skaters, might want to explore the city and find some cool interesting spots on their own, which would benefit the art of street skating and make a more interesting video. Instead, because money is being spent and the goal is to promote a brand trying to align itself with urban skating, not quality street skating, you get repetitive New York edits all the time. This happens everywhere skaters travel, even when it’s not on a company's dime, because that approach is part of our skate culture. However, when a video isn’t made like that, and the skaters themselves mix in what the locals show them with their own spots they find, it’s usually well received. If you wanna see an example, watch the GX1000 Colombia video, then watch any other travel edit to Colombia made before the GX edit. The difference in spots is ridiculous. They skate so many unique, creative, sick looking spots in the GX edit. Then in all the other previous travel edits to Colombia, it’s big threes and handrails. You can do that with most GX videos, actually. Not that they’re the only crew spot hunting and making original street skating content, that’s just an example that comes to mind. 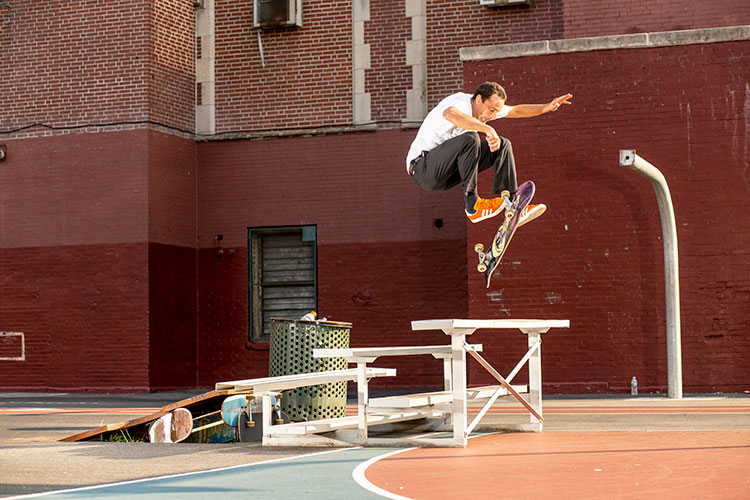 Caddo is not usually a three flipper, but at 39 he pulled this tré flip out of nowhere

I spent a lot of time with you while you were filming this video part. Because it was filmed mostly in New York, did this one have a different process than any of your past video parts? Was filming during the New York winter as hard as people say it is?
Well, this was the first video part I filmed with Matt Schleyer. I met Matt through Jonathan Mehring. Mehring had been shooting photos of Frankie Spears and Matt was filming Frankie as well. Matt moved to Brooklyn and I ended up hooking Matt up with some freelance work at the company I worked for at the time. But we didn’t go out skating for a while. I’d just see him around on jobs or maybe run into him and Frankie at a skate spot. Frankie caught an injury which freed up time for Matt to film my weird old self. Matt was also filming Mark Suciu who had a minor injury around the same time. I definitely got self-conscious at times. Going from filming one of the gnarliest young dudes and one of the most technically advanced skaters to filming me skate some weird piece of architecture in the Bronx had to be a strange one for Matt, but he was always just as hyped and down to go on whatever dumbass mission I had in mind. He wasn’t yet getting paid by adidas to film. Matt had started doing more blue-collar construction jobs and my freelance work had gotten really slow; we were both just broke with a lot of free time. We were going on skate missions as much as possible. I did do a mini LA/SF winter escape for a month this past winter and, randomly. Matt was also in SF at the same time to film Frankie. I found all my little spots and then snuck in two days of filming with Matt. But other than that, most of it was filmed during winter or fall in NYC. 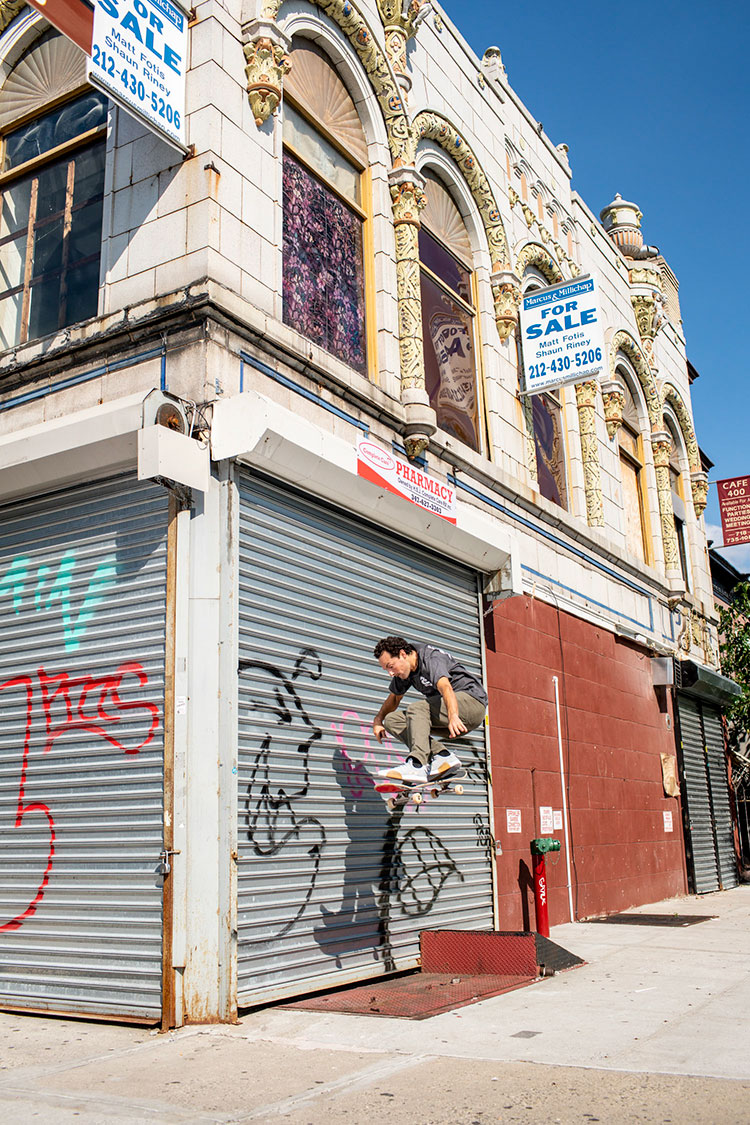 Dave caught this kickflip so well it just looks like an ollie. He got the boot from the cops before he could do another more kickflip-looking one

Do you feel more productive on a skateboard in colder times or when it’s hotter out?
Filming in the winter in NYC can be much easier than in the summer. The streets of New York and the parks everywhere get so crowded over the summer. And so many skaters’ friends come to New York over the summer that it breaks up the stable cold weather skate routine you can get into. I love that about the summer ‘cause it just becomes more about enjoying skating around, hanging out with friends and socializing. You skate into Manhattan, get an iced coffee, post up on a stoop, make fun of people's silly fashions and just people watch. After that, you go skate some more and then catch a happy hour. That’s the summer routine.
But the winter skate routine just gets more focused; you only got so much daylight. Not everybody wants to skate on cold days. You end up with a regular three-or-four man skate crew, occasionally a special guest or two. Everyone gets on the same page about spots to skate. You get out by 11 ‘cause it’s gonna reach peak temp by noon and cool down by four. So you pick your spot, or spots, wisely. You get done skating by five or six, eat, then maybe catch a mellow happy hour. You get home by ten or 11. In a condensed time frame, you get your skate time in and your shooting-the-shit-with-friends time in. Then you’re ready to repeat the process the next day, unless that soul crushing plague we call work comes into play. But even that makes you appreciate the days you do get to skate even more. 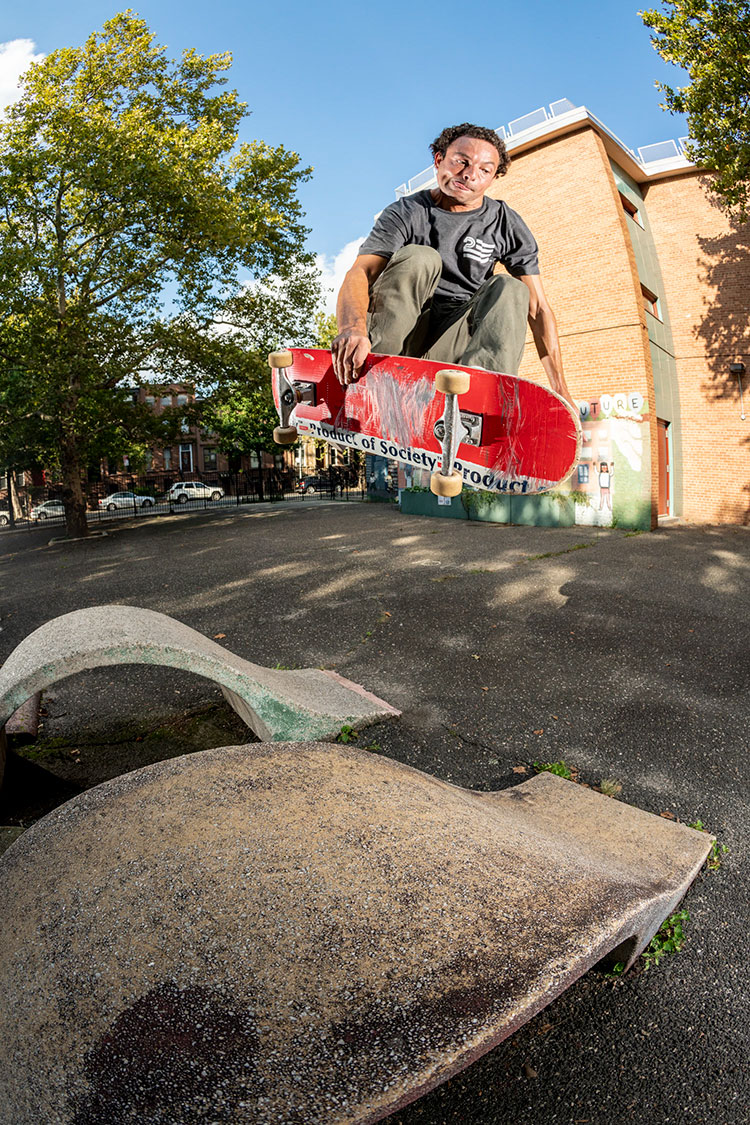 We needed four times the amount of Bondo that we initially thought to properly fix this thing up. Dave managed to get this frontside air with ease, though

Do you have anyone you’d like to shout-out or thank?
I can’t thank Matt enough for filming and editing this video. Also, I’d like to thank the contributing filmers, Alex Raspa and my favorite OG skate filmer, Joe Perrin. Thanks, Mac Shafer for shooting the photos. My winter skate crew: Lou Sarowsky, Taylor Nawrocki, Thom Musso, and Dave Mitchael. Big thanks to Damon and everyone at Politic for keeping me on the fresh boards, Paul Shier for the adidas flow, Seasons skateshop for all the fresh gear and shout out to Jessup Griptape for the box of grip—thanks from me and everyone else who’s raided that box. Keep ‘em comin’. And of course, thanks to my friends, family and girlfriend. Shout out to Alex Davis and Brennan Conroy for helping me get this video part and interview on Thrasher, and thanks to Thrasher for posting it.