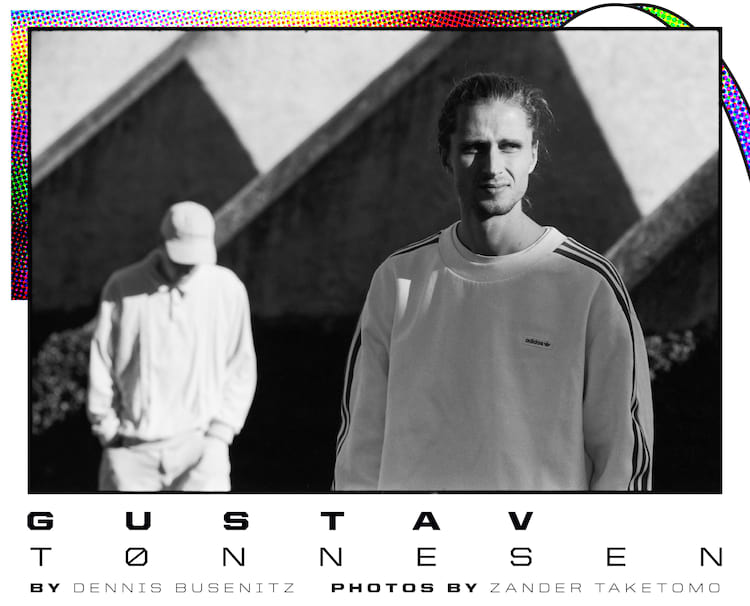 If you were an incredibly insecure, vain and easily-threatened skater, Gustav Tønnesen would be very easy to hate. He’s able to do the impossible while making it look effortless. Take, for instance, doing a nollie back heel off a foot-high bank that is steep enough to wallie? Or how about pulling off an all-red adidas track suit and a man-bun? He not only pulls the look off but somehow inspires you to buy the same playboy getup and grow your hair out. And in addition to flying all over the world, getting footage for his sponsors, he also magically filmed and edited one of the great VX videos of the past few years—Sour Solution II. But his skating and videos are not for everyone. They aren’t for those shallow self-centered skaters who have the sneaky feeling that Gustav Tønnesen is the inspiration for the meme about “the guy she told you not to worry about.” And, frankly, that’s okay. Because just about everyone else gets to keep enjoying his uniquely swaggy blend of Scandinavian and Spanish-inspired skating as he floats from mini-spot to mini-spot filming unthinkable moves. And eventually the haters will come around, too, because Gustav is about to drop some more footage and because they start therapy on Thursday. —Ted Schmitz 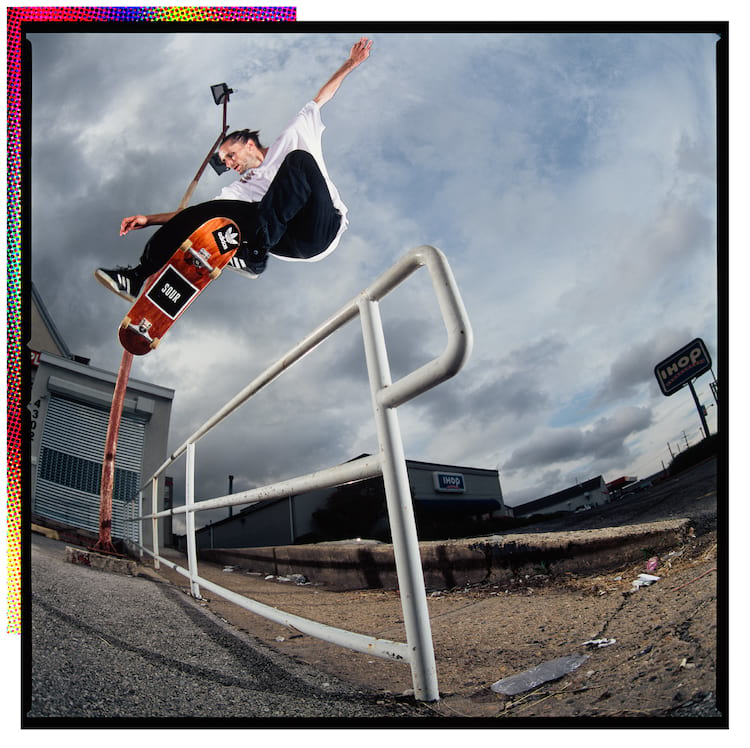 So I know you like talking, so before we get started is there anything you want to get off your chest without me prying?

Alright, we’re off to a good start.

I don’t know what prying means, but go ahead.

It’s like forcing, making you say things that you don’t want to say but I’m making you do so. So just in case the reader doesn’t know anything about you, where are you from?

I’m from a small town outside Stavanger, Norway. Twelve-thousand people live there.

Looking great over the grate—switch front nose, flip to fakie

That is pretty small. How does one get into skateboarding there? What is the town known for?

The kids in the neighborhood just had skateboards and Rollerblades. I tried both and got stuck with the skateboard. I guess the town is known for its fishing industry.

Yes, pillaging the seas—typical Norwegian style. Did you have a park or something or was it just street skating? Also, are you a product of Bryggeriet, the skate school?

There was one pretty shitty skatepark that lasted about two years, then another one a year later that lasted a year. Both were wooden and got destroyed by the winter. The closest indoor park was an hour train ride away. I used to go there on weekends. And no, I didn’t go to skate school.

How old were you when you started skating?

So that was 17 years ago, correct? 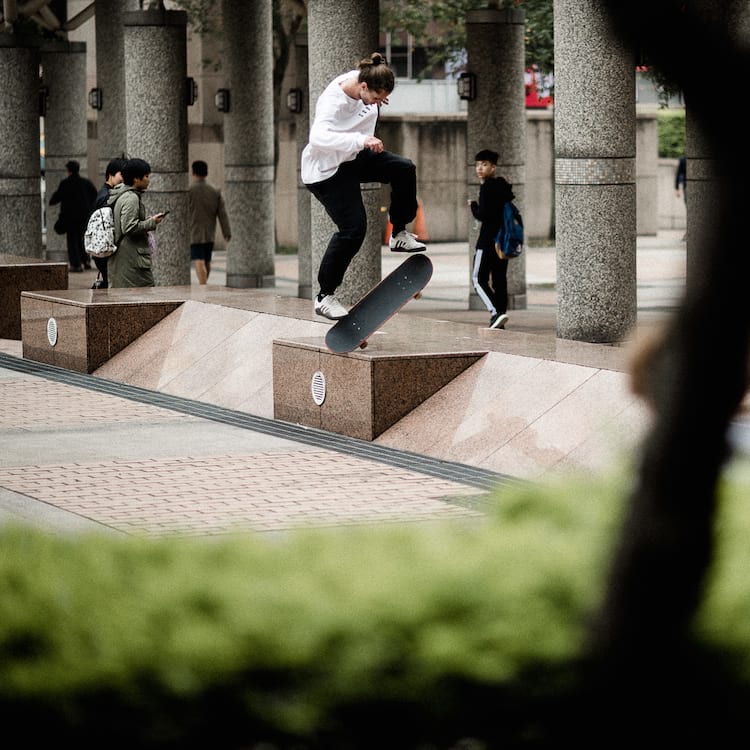 Nollie flip front blunt, the kid in the background stole your pants

Were you inspired by local European skaters or by skaters from the US?

A bit of both. The videos I watched the most were Flip’s Sorry, éS’ Menikmati, Cliche’s Bon Apetit and a Norwegian video called Bernhard Behaviour.

Those are all good videos. I haven’t heard of Bernhard Behaviour, though. Does it have anything to do with the dog, a Saint Bernard?

Maybe. It was from a distributor called Bernhard Sports. It was mostly Oslo skaters.

Did you get out of Norway much before you got sponsored?

Not really. I went with friends to Barcelona sometimes.

Did you have any goals of making it in skating or were you just enjoying yourself?

I wanted to just be skating, for sure, because I enjoy it.

It ain’t stone but it still looks hard as hell. Switch 180 manual front nose to fakie—Gustav’s all alone in this zone

I’d say that’s the correct attitude. What spots did you want to skate in America and how did you make it out there the first time?

I wanted to skate small handrails, picnic tables and benches, but I found out that I like to slide and grind on stone more. I skated for a Norwegian distributor who was making a video, so I went with some people and stayed in Long Beach for a month, then went to San Diego to meet the Sour guys, which was part of Sweet skateboards at the time. That was my second trip with them.

I always liked the story of that mutiny. It makes it even more of a team when you can get through something like that.

Yeah, we made it work! 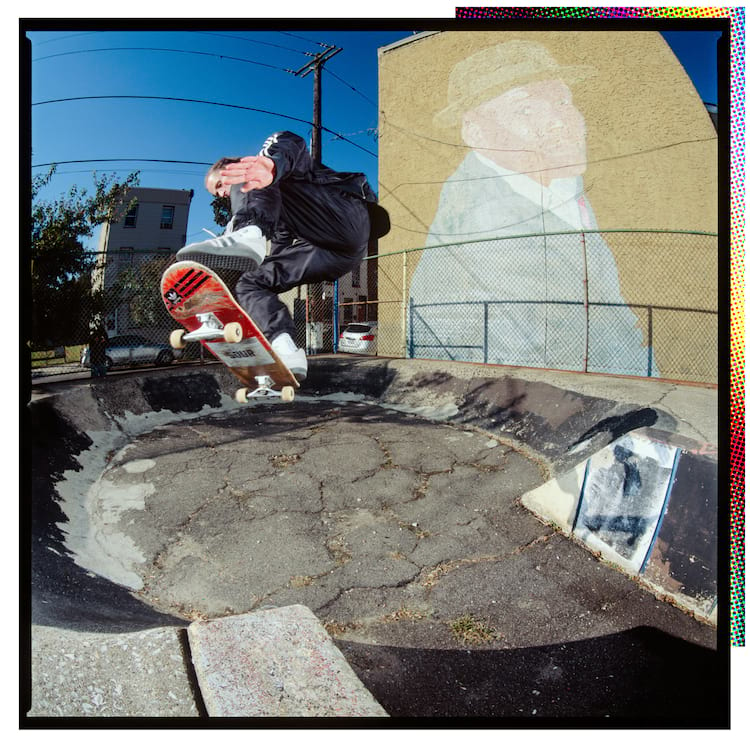 When life gives you an ashtray, carve into a kickflip to fakie

You sure did. That’s kind of how the Girl team got started too. Are you involved with any of the business side of the company?

Not really. I just skate, film and sometimes have a word on design.

You don’t mess with board graphics?

A little bit, but more just saying what I think.

Do you just plan on doing that ’til the last one is cooked and you can’t buy them anymore?

Yes. I have four so hopefully it takes a while. I took a pretty gnarly slam today. I was filming a line, rolling long lens, and at the end of the line I rolled into a little cube bench thing. I dived over it and the camera flew, like, five meters in the air and bounced another two meters. No problems with the camera afterwards, though. 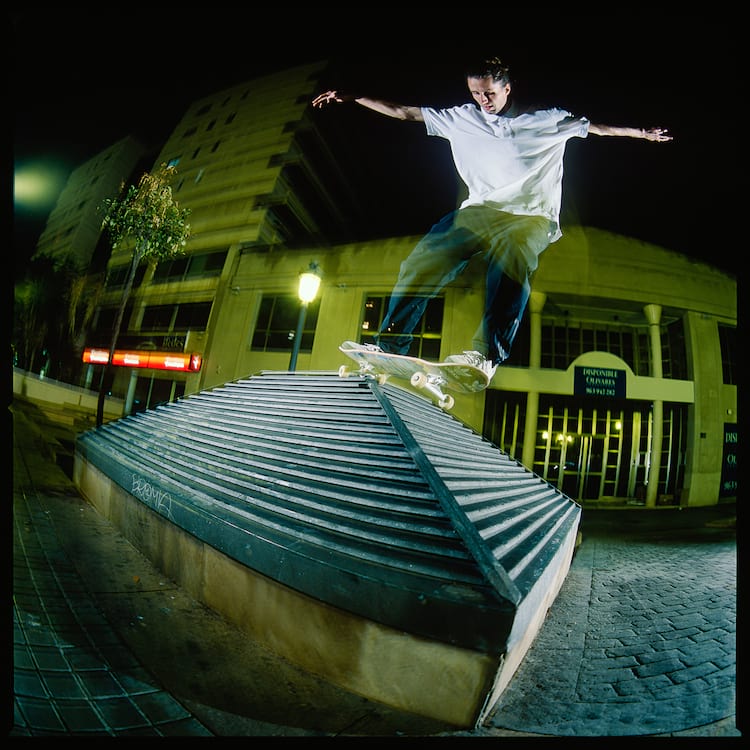 Switch nosegrind revert into the bank, the pyramid gods are appeased

They don’t make ’em like they used to. So is the appeal of the VX how the footage looks? Is it a nostalgia thing?

It might be a bit of nostalgia, like, This is how a video of skateboarding should look. I also think the sound is great. People are doing good HD 4:3 format with wider fisheyes now, though. I think that’s nice as well. The thing I really don’t understand is 16:9 format in skateboarding. I think it looks slower.

Can we come up with a name for this fakie nosegrind, switch bigspin to backside bigspin? How about the Tønnesen tornado?

Well, it seems like there are quite a few people who feel that way. I prefer it to iPhone footage. What do your parents do?

My father works with music. He has a recording studio, arranges concerts and plays different instruments. My mother works in a health center.

That explains a lot. I imagine you got some creativity from your dad, then. It’s probably why you have an interest in being in the editing room, too. Did you have to learn how to play any instruments?

I really like music, like both of my parents, and I picked up some music from them but I was never really into playing any instruments. I think because I always liked to do more active stuff. But I probably will when I’m old and tired and don’t want to move much. 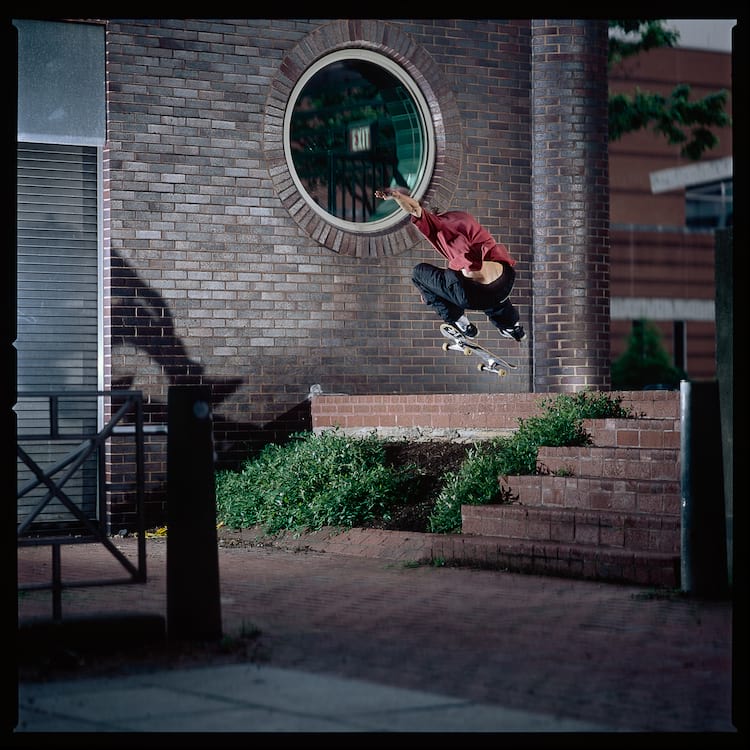 Sick flick off the brick, switch flip up

When you learn an instrument you always have a friend. I heard that the other day and really liked it.

Are your parents stoked on you skating?

Yes, I think they would be happy for me having any “job” that I like a lot. The only thing was that it took awhile for them to give me my first skateboard because they thought it was dangerous. I remember saying I wasn’t gonna do anything dangerous and they answered, “But if you get good at it, it will be more dangerous.” Like skating bigger stuff, you know? I still don’t do much dangerous stuff, though.

That’s awesome. Yeah, you do a good job not getting wrecked. It seems like everything you do is very well thought out.

I try to think but I go down sometimes.

It can’t be avoided but you can have a lot of fun with a reasonable amount of risk. 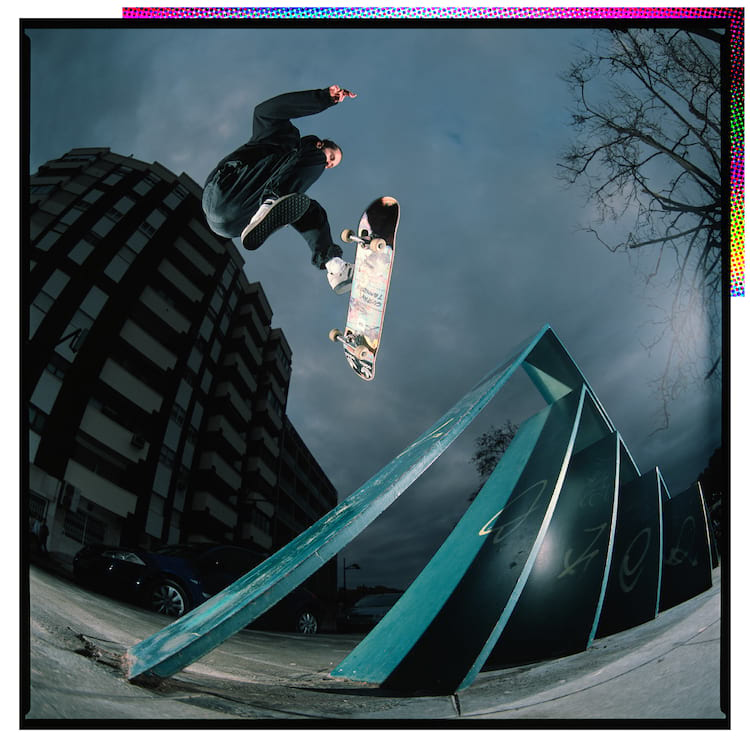 Tré flip to fakie, no room for slippin’

Will you be representing Norway in the Olympics?

No Olympics for me. I’m not really anti-Olympics and all that, I just don’t care about it.

Yes, I know. It’s one of the guys I started skating and filming with who started it.

So what does your mom teach?

She’s not teaching. She’s in a health center dealing with vaccines and stuff.

Did you know vaccines cause autism?

How’d you get slide marks there? Look closer—180 wheel well slide 180 out

It’s a conspiracy theory out here in America.

America is a conspiracy theory.

I haven’t heard that one. That’s good. Is it actually just a part of India? Did Columbus nail it?

Yeah. Do you believe people have been on the moon?

I saw something about it being fake but didn’t really check it, so I don’t know. 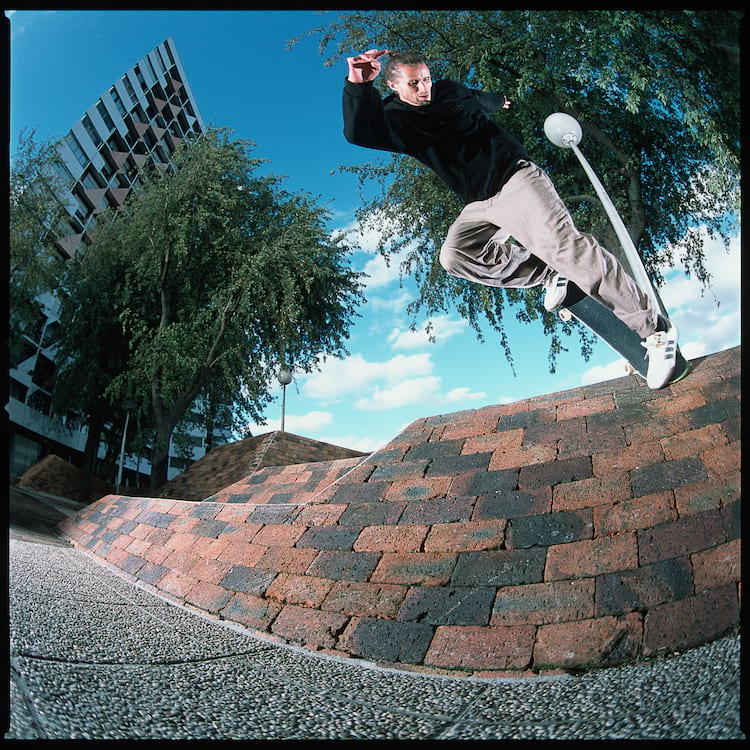 Wallie off the lower bank, quick wallride on the upper one and then backside noseblunt the tall part? Unless you’re talking about Gustav or Suciu, we’re calling BS!

What is your biggest fear? Do you have any recurring dreams?

I’ve had many dreams that there are big spiders in my bed and I wake up freaking out. It’s gnarly when you dream about stuff where you are in reality! Spiders are not my biggest fear; I just don’t want them in my bed. I don’t know what my biggest fear is and I don’t want to know either.

Do you think the Earth is flat?

Some of it is. 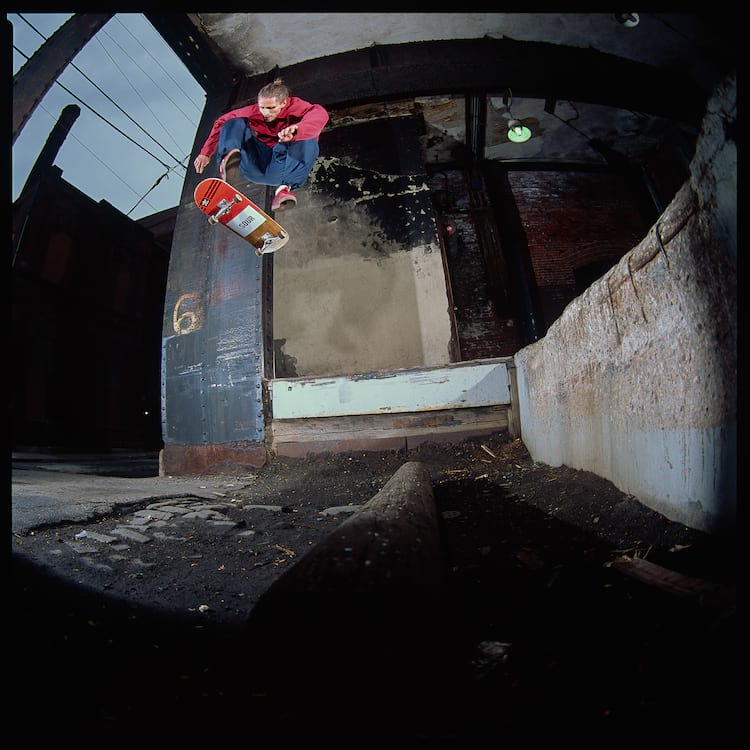 Switch hardflip over some flat Earth. Skateboarding is a conspiracy theory

Good answer. You ever hear of chemtrails?

Yes, but I’m not really sure what they are. Do you know?

It’s this idea that the government is using airplanes to dump chemicals on us to keep the masses docile.

Have you heard that Tom Penny is Banksy?

Yes, I heard that. Niels Bennett told me.

It attracts crazies and make them crazier.

Up and over with a switch body V. If you’re gonna do ‘em, do ‘em like this

Colin Read. He made Spirit Quest.

Haven’t seen it. I guess I better get on it.

It seems like you never get mad while skating. Is that so or do you just internalize it?

Not that often but sometimes. I keep it to myself and try to relax as fast as possible, though. 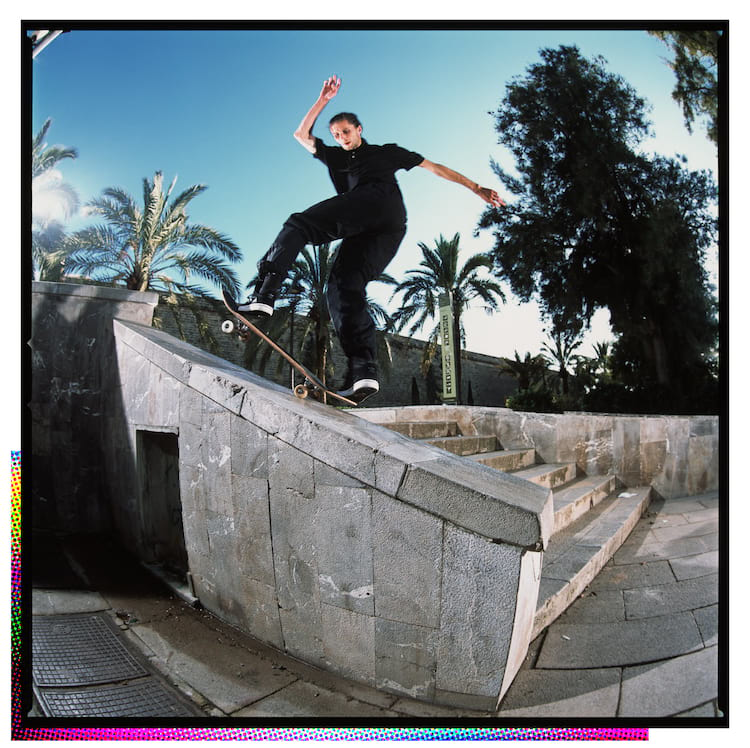 It shows. It looks like your moves are very relaxed and things just kind of fall into place. What trick have you had to work on the longest?

It’s definitely not always like that. One that pops into my mind was when I was on a King-of-the-Road-kind-of thing and a challenge was to back Smith to backside noseblunt on a ledge. I made it after two-to-three hours, I think. I usually give up after two hours or so of trying a trick.

What? That seems impossible. Was it a drop-down ledge?

No, it was on the same ledge.

Inquiring minds want to know where that can be watched.

Oh, that might be hard to find, but it was a Kingpin magazine thing called “The Drive” and it was with Sweet skateboards.

I can’t find it so it didn’t happen.

Kickflip to nollie flip doesn’t really do this sequence justice, so let’s just say holy F’n crap, how the hell did you do that, Gustav?

Can’t see the curvature of the Earth so it must be flat. 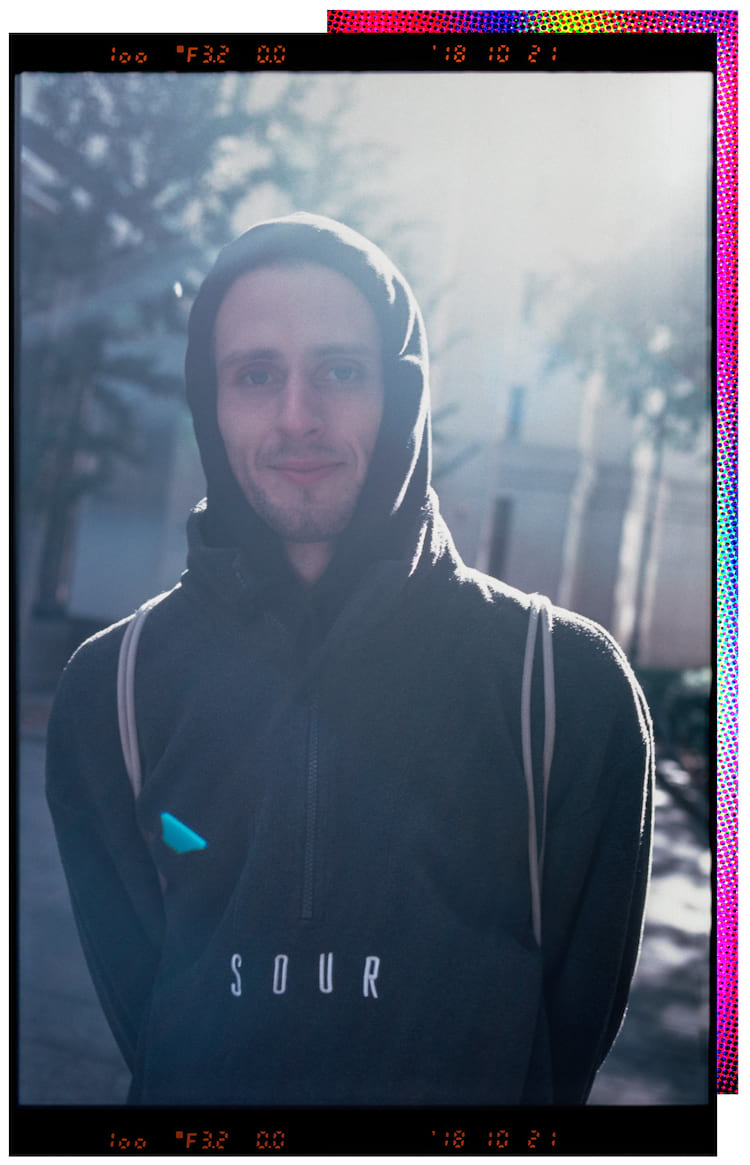