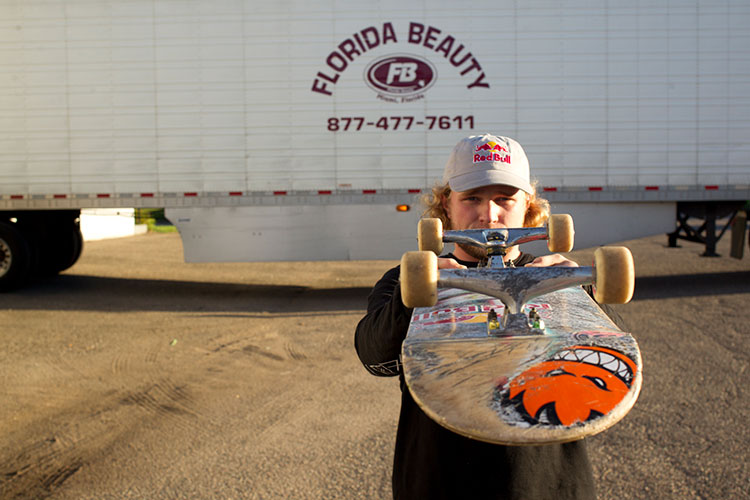 Interview and photos by Ben Karpinski

How did you get hooked up with Baker Boys?
I came out to LA to skate a contest about a year ago and Steve Hernandez hit me up afterwards asking if I would like to get some boards. I was stoked.

You had a pretty big year in 2016. How many video parts did you come out with?
Last year I put out, like, four parts.

What does that bring the grand total up to?
In my life? Probably eight or nine video parts.

You keep cranking them out. What’s the most clips you ever got in a day?
Ha! I’ve never thought of that. It all depends what I am skating. One time on a trip I got four single clips and a line. Lines don’t come that easy for me so that was probably my best day. 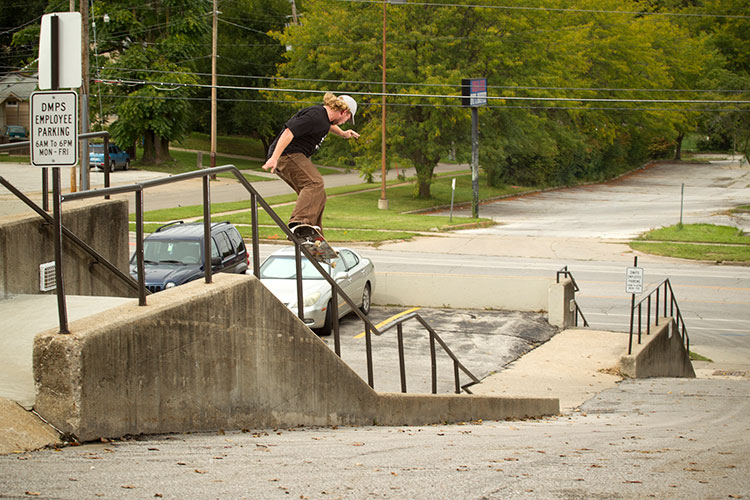 Is this your first part for a company?
Yeah, first time. This is going to be one of my main parts. I’m really stoked on it.

Did you have any say in the song or the editing?
Yeah, this was one of the first times that I got to sit down with someone while they edited my part and go through the whole process. Normally I just give someone a song and then see the finished product, but I was actually with Donut for this one and got to oversee everything.

A lot of the footage from the part was from the Deathwish for America tour. How was hitting the road with the Deathwish guys for the first time?
It was awesome. I hadn’t been to any of the cities we went to. We started in Cleveland and made our way to Minneapolis. A lot of the spots we went to I have never seen in videos before, so that was really cool too. I love skating new spots. It was a great trip.

Did Lizard torture you at all?
No, not really on that trip. Afterwards there have been a few times but I wouldn’t call it torture. Its just Liz. He’s always funny. 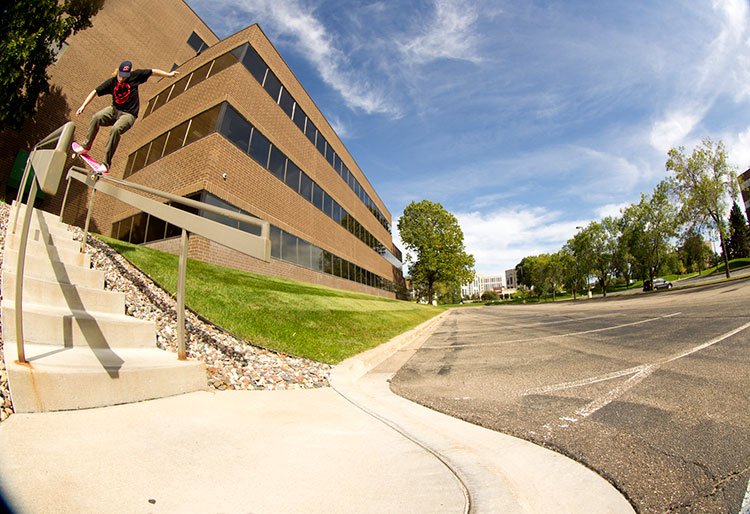 Crooked grind gap out past the curb, no buckling involved

Have you gotten to skate with Greco yet?
No, I have only met him once so far. I’d be down for sure, though.

You take any fucked up slams for this part?  I know you are always out there getting buckled.
Always getting buckled. What’s crazy is that while we were editing we realized we didn’t have too many slams. I took a good one trying to 5-0 a 20 rail. That one definitely sucked.

What part of Florida are you from?
I’m from Deerfield Beach. It’s about an hour north of Miami so it’s down towards the bottom of the state. It seems pretty similar to Southern California weather-wise except it’s a bit more humid.

Speaking of Southern California, I cant help but notice a Florida invasion happening in Long Beach. Some days at Cherry I see more Florida plates on the street than California ones.
We are starting to take over. It seems like we are finally getting some recognition out here. There are so many good skateboarders from Florida but nobody ever sees them. The industry is in California so it is really cool to see people move out here and start finally getting on companies. I’m stoked to be a part of it.

So who is the next guy that is going to move out here and blow minds?
My friend Marcos Montoya. He has been talking about making the move to Long Beach pretty soon. He is only 16 or 17 but he is so good. Can’t wait ’til he makes it out here. 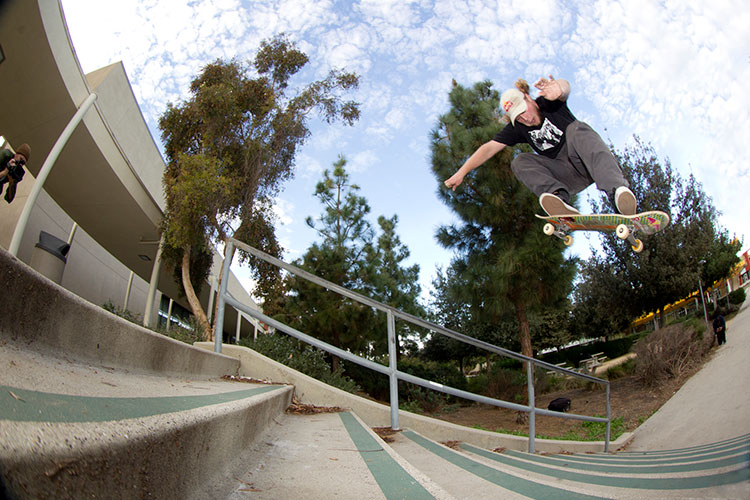 What is your living situation like? How many people are living in your apartment?
Right now we got six people living in a two-bedroom one-bath. It’s not too bad. We got two people in each room and two in the living room.

Damn! Do you guys all split the rent?
Yeah, it winds up a being little over 300 bucks a month. Gotta throw in a little extra for that Wi-Fi. It’s pretty cheap. It’s tight.

Is it true you were sponsored for wakeboarding?
Wake skating! I haven’t done that in a few years now but those are the homies. Right across the street from my house was this place called Quiet Waters Park and they have a cable there that tows you all around. I started when I was about 15 or 16 and it was just something fun to do when it was hot out.

What is the secret to a good pinch?
Confidence and practice.

Who has your favorite front crook out there?
Michael Pulizzi. 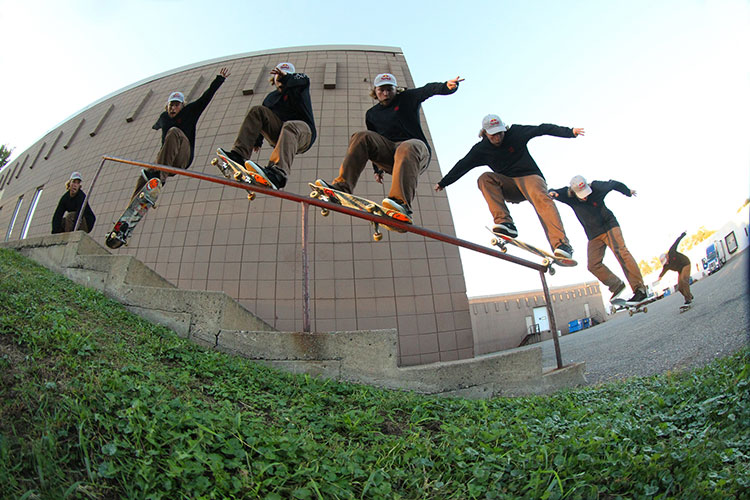 Can't grind a wake so Jamie took it to the streets, front crooks to fakie

How’d everything with Diamond come about?
Torey hit me up out of the blue and explained to me what all they had going on over there and really just hyped up the situation and invited me to be a part of it. After hanging out with all the dudes I thought it was the right thing to do and am proud to be on the team.

What are their trips like?
I’ve only been on one trip with those guys so far but that trip was wild! They got us a five-story mansion in the middle of Manhattan. There was a big contest in town that weekend too so everyone was over at our spot. It was pretty hectic but we still managed to go get clips during the day.

What’s your take on contests?
I don’t mind skating in contests. I skated in them a lot when I was growing up and just like to think of them as a fun weekend with all the homies. All your friends from everywhere get to meet up in a random town and skate together. I think they are cool I just don’t take them too seriously, though.

What’s up with the Florida Shake Junt project?
Flavor Country! Not too many people know about it yet but it’s in the works. Me, Ish, Zion and Tyson are all going to have parts. We have been going out with Beagle a lot. It’s been going good. The video is going to be sick.

Already on to the next one. How many parts do you think you will have this year?
Shit, I’m not too sure. I don’t really think them out; they just sort of happen. If I had a number in my head it would just stress me out and it wouldn’t work. I just go out and film and if someone gives me the opportunity for a part and I have the footage, great. Or if it is something I can focus on then it just sort of works out.

Anyone you want to thank?
Deathwish for giving me the opportunity to film this part and letting me be part of the family. Everyone else that has supported me like Spitfire and Thunder, Diamond Footwear, Red Bull and obviously my family and friends back in Florida.