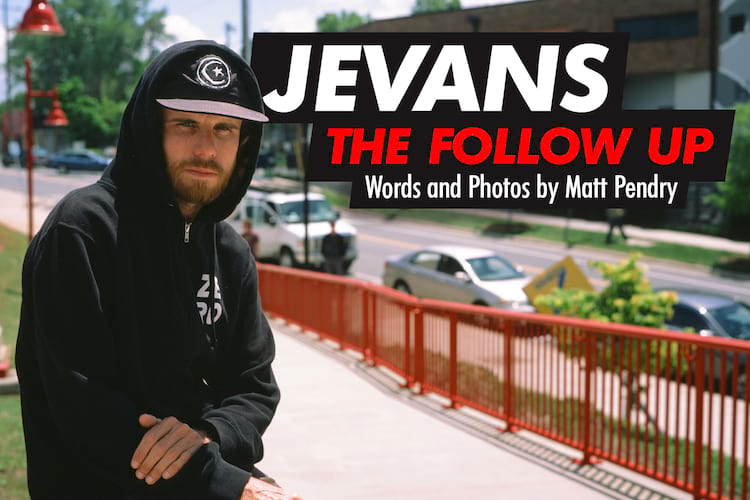 I’ve known John for two years and, yes, the rumors are true—he is the sickest dude out and only wears shorts year-round. I’ve never met anyone so stoked to light up spots until 4 AM every night on a week-long trip. He’s back at the hotel putting on Zero videos while everyone passes out, then he’s the first one up, trying to wrangle everyone out to the van. He’s the hardest-working man and I wouldn’t want to share the bottom of a stair set with anyone else. Watch his new vid Cinco, then get to know North Carolina's finest lensman.


East-Coast carnage with some Yeto flare, Jevans' newest is a must-see

What’s up, Jevans? What’s your real name and where’s your hometown?
John Evans, and I'm from Kernersville, North Carolina.

How long have you been skating and filming?
About 19 years. I pretty much started filming when I started skating. 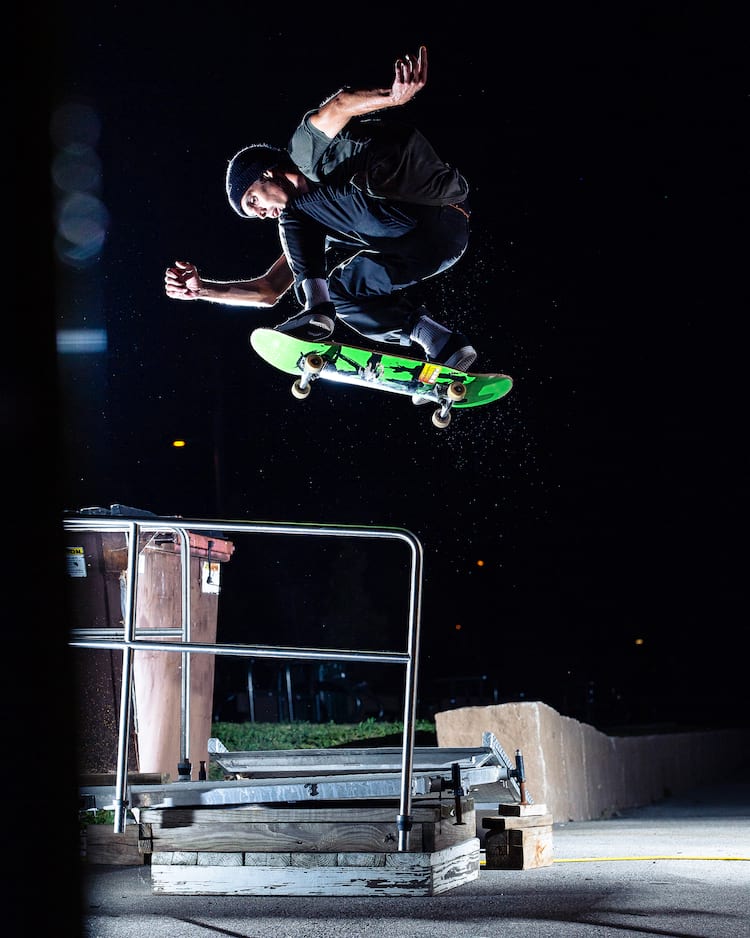 Who got you into filming when you were younger? Were there local videos that older skaters made?
My dad gave me a HI-8 camera and that’s where the love for filming all started. I started filming before I ever even watched a skate video. When I first went to the local park I was around 13. A lot of the other dudes were way older than me so I just decided to try and learn how to film and skate at the same time. 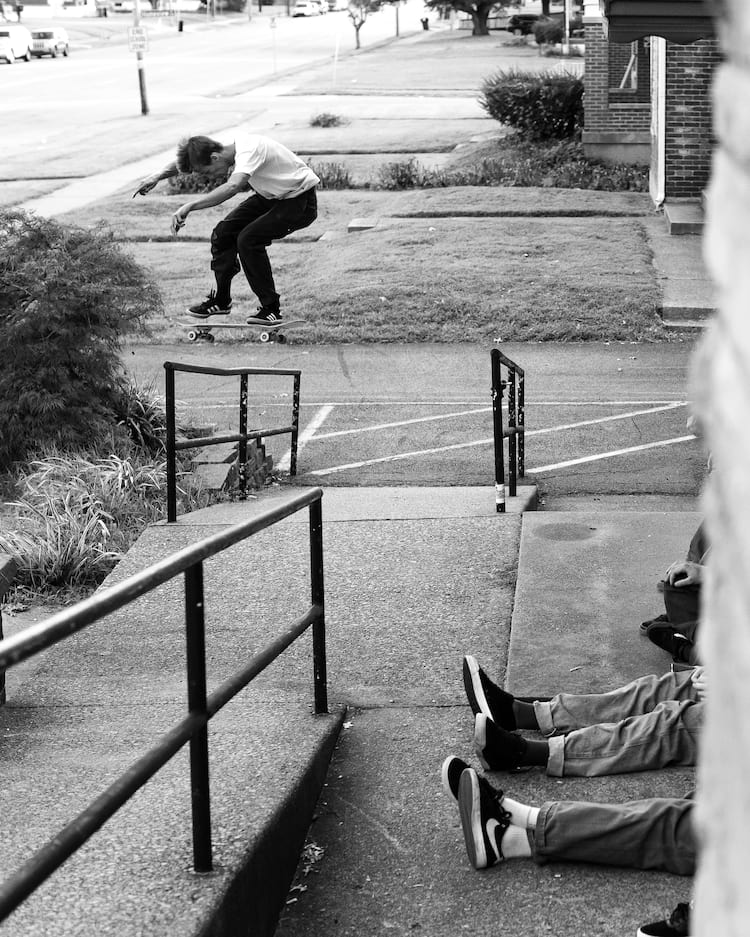 Your videos seem to be heavily inspired by early Zero vids. There’s titles, parts and friends sections. What is it about that format that inspires you?
Misled Youth was the first video I ever saw as a kid. I was drawn to how raw everything was and the in-your-face style from the VX1000 with the MK1 setup. It left you having to watch it over and over to comprehend everything you just saw.

What was the first handrail you skated or filmed at?
The Scuba Steve noseslide rail that was the ender of PJ Ladd’s part in Really Sorry. The first day I ever went to film at that spot was the day I met Justin Brock as well! 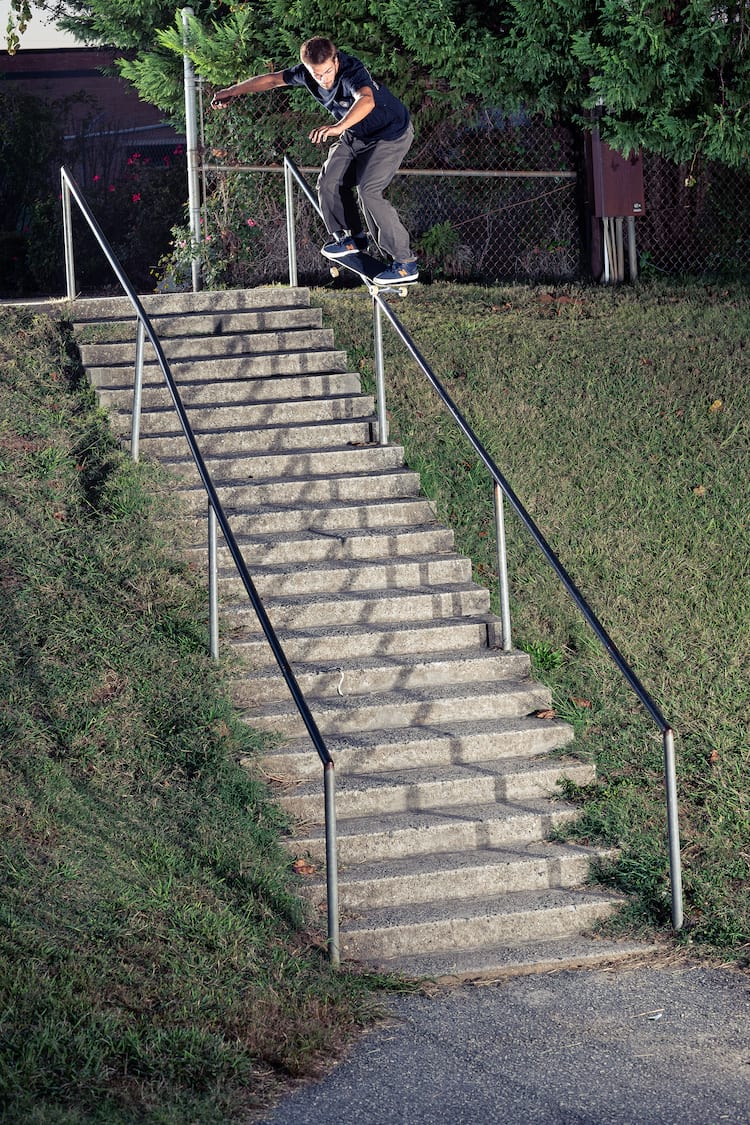 Skating small stuff, curbs and ledges has seen a bit of a resurgence. Why do you think that is?
Skating originated with those kinds of spots. I think people have drifted back to that for a couple of reasons. Within the last few years, the caliber of tricks has gone far above what most of us could’ve ever expected. At the end of the day, everyone started skating because it was fun and mellower spots aren’t nearly as stressful compared to showing up at a big handrail or stair set.

How many full-length videos have you made now?
This would be my fifth one now—Cinco. 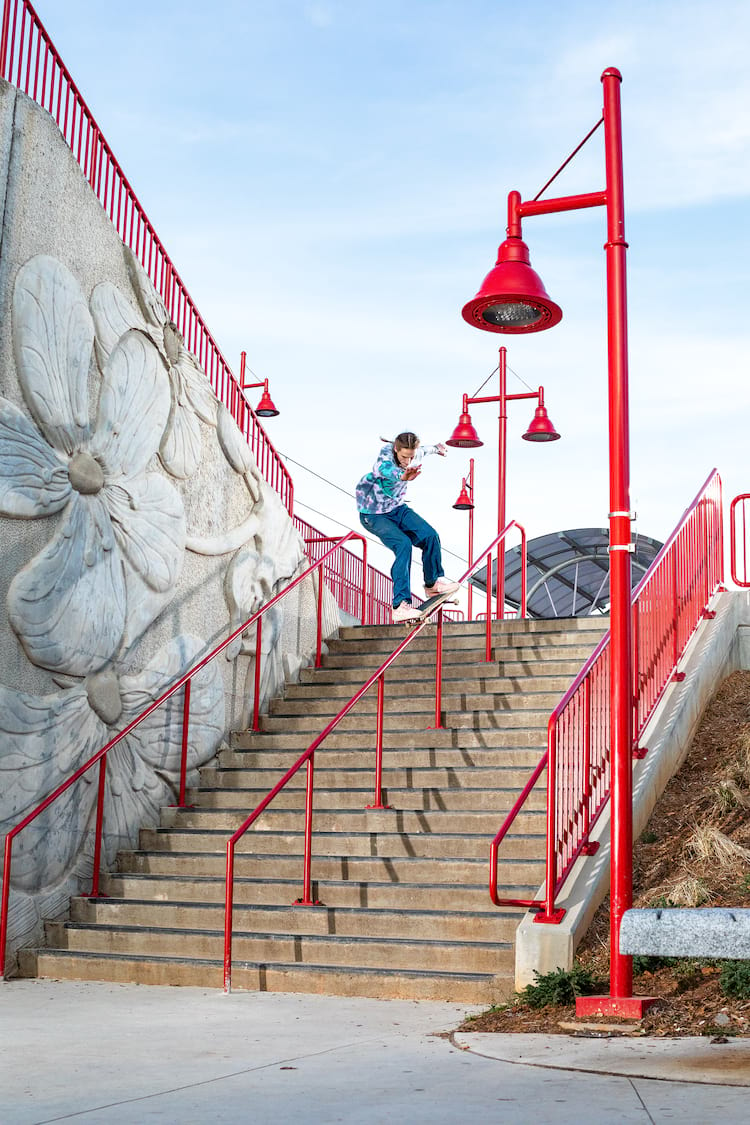 What’s the scariest clip you’ve filmed?
I filmed Julian Lewis 5-0 this 20 rail in my last video Analogue. The scariest part for me was that I didn't want to mess up and have to tell him he’s gotta do it again.

What's the protocol for when a friend sacks a rail? Do you keep filming or run over to check on them?
Over the years, I’ve learned to give them their space to get regrouped. It only worries me when someone screams or starts making noises. I usually keep filming unless I can tell they’re in some serious pain. 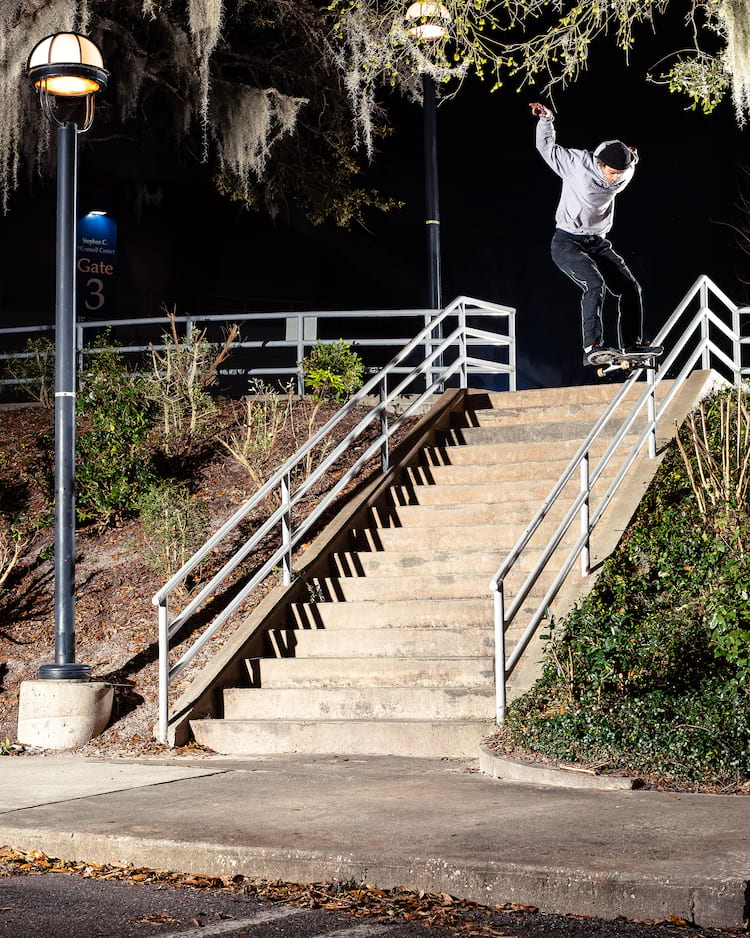 You seem to always have a new ripping squad for every video, how do you manage that?
A lot of it is just from meeting different people out filming or on trips. It’s a lot of word of mouth, really. People just hit me on Instagram and we meet up.

Speaking of squads, you’ve had quite the lineup of skaters make a name for themselves. Do you think that keeps the younger kids hyped to get out there with you?
Not sure if they think about that stuff at all. I think they see that some people are able to achieve their goals with me and the kids just follow that path if that’s what they really want. 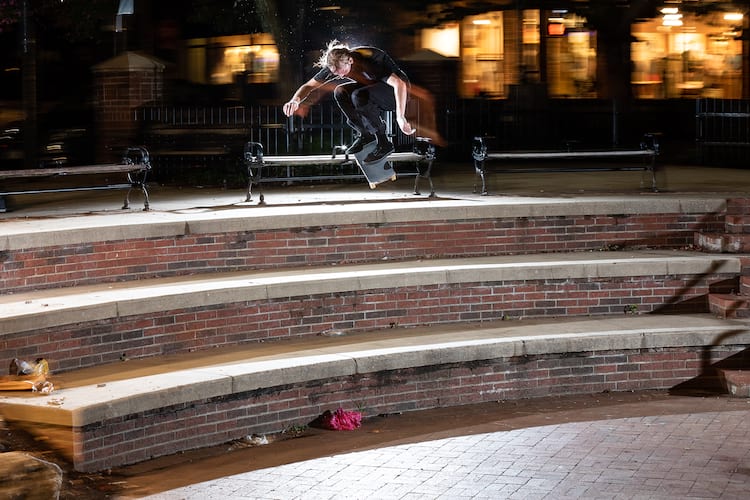 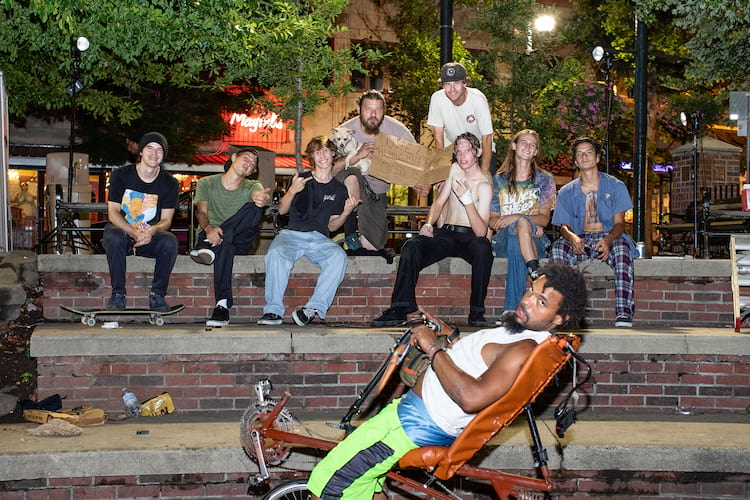 Do you wish more people would head out to skate North Carolina, or do you prefer to keep it less blown out?
Yes and no—I’d like to keep it as less blown out as possible even though a ton of the spots here have been skated for quite some time. It is fun getting to show people around who have never been here before, though.

You’ve been holding down the East Coast heavy for some time, any plans to make it out West soon?
Hopefully I’ll make it out this winter. 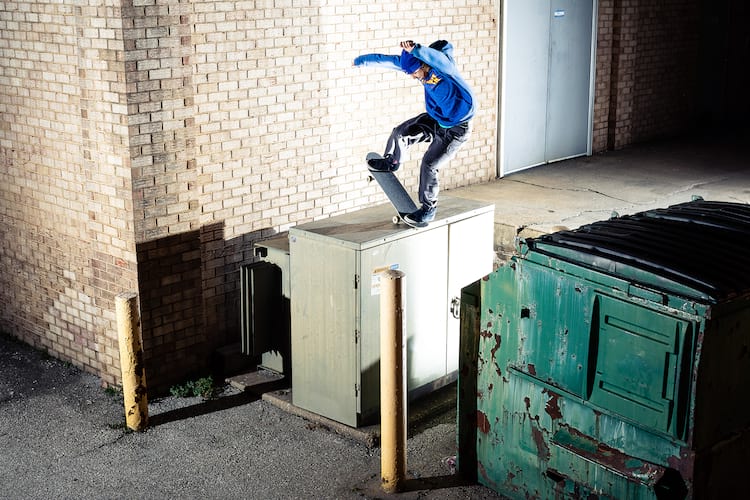 How ‘bout a move out there?
I’ve thought about it. I think everybody in skateboarding considers it, but I don’t think that’s for me right now.

What are the road-trip essentials for the van?
All the homies! Lights, generator, a tour guide with all the pins and plenty of wax because that always gets left at spots. The best part of being on the road is showing up to a spot that you’ve been really anxious to skate. Then no matter if it’s 2 PM or 2 AM, you’re gonna skate it because you don’t know when you’ll be able to come back. 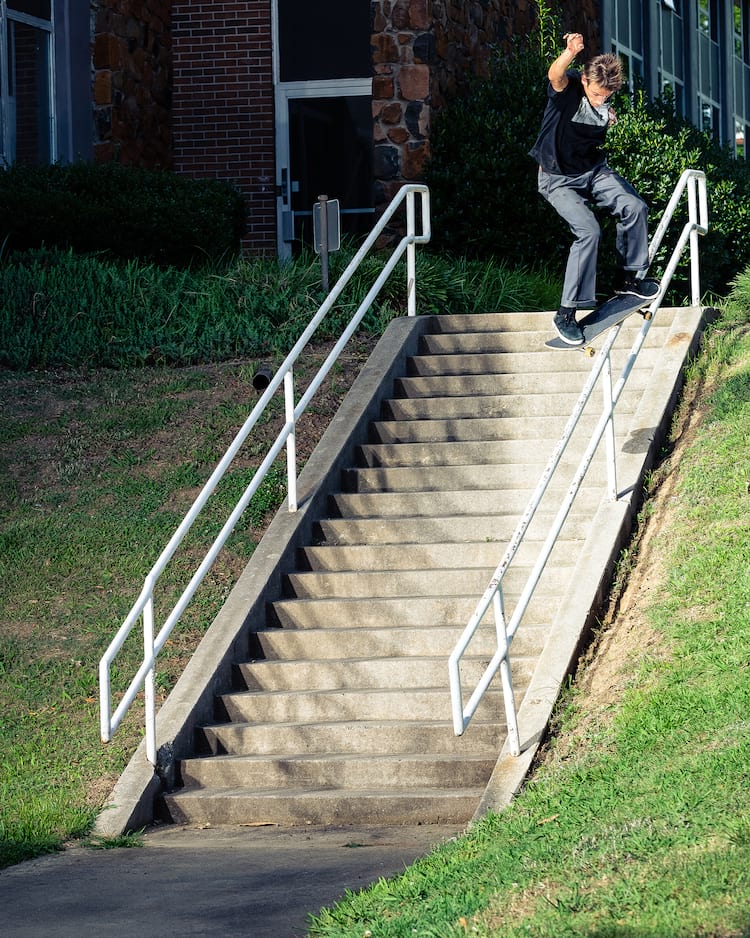 If you had to move to a different country, which would it be?
I’ve yet to leave the country yet, but Australia has always piqued my interest. The spots there look so sick! 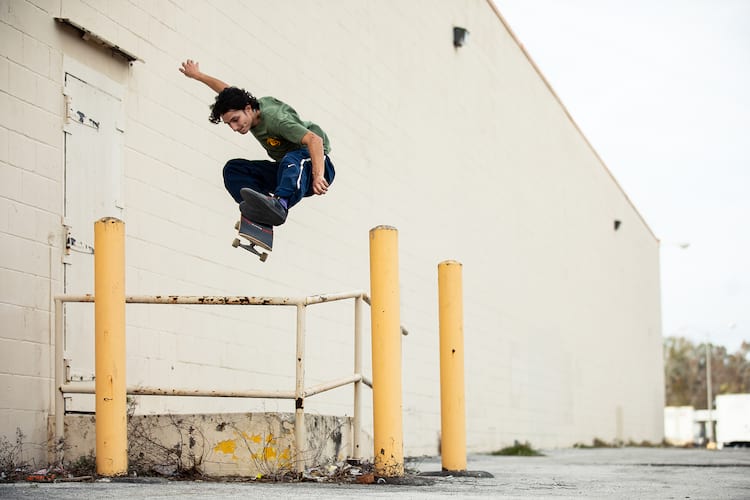 Who’s your favorite skater you’ve had the opportunity to film?
I’d have to go with Leo Romero, for sure.

And why's that?
Growing up I was a huge fan of Leo's skating. I first met him and the Tum Yeto crew through Mike Sinclair back in 2011. Seeing him skate in person for the first time was awesome. He was just charging every spot out of the van, and sometimes before a filmer was ready or before the spot was lit up. The fact that he can take such a gnarly slam and laugh about it is so sick to me. He’s just a skate rat like all of us who are determined to keep going for as long as we can. 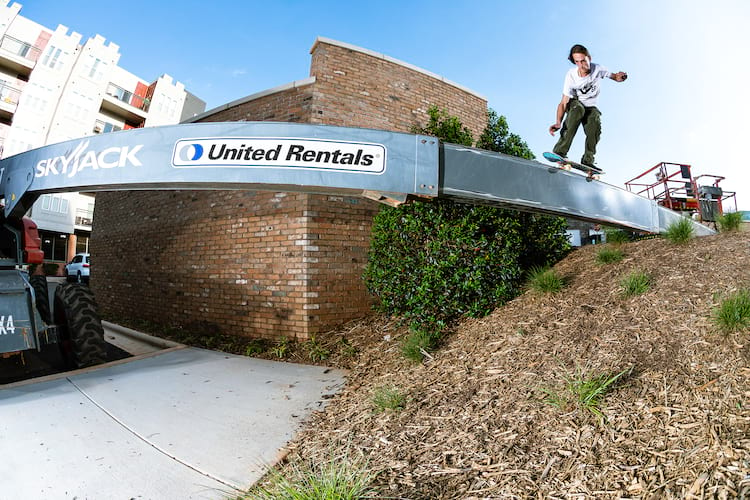 Are you VX forever kinda guy, or will you be making the switch for your next full-lengths?
I do have the full HD kit and I use that when needed. For my personal videos, I’ll always use the VX. It just feels more natural. Not that I dislike HD, but I think VX looks the best for skating. 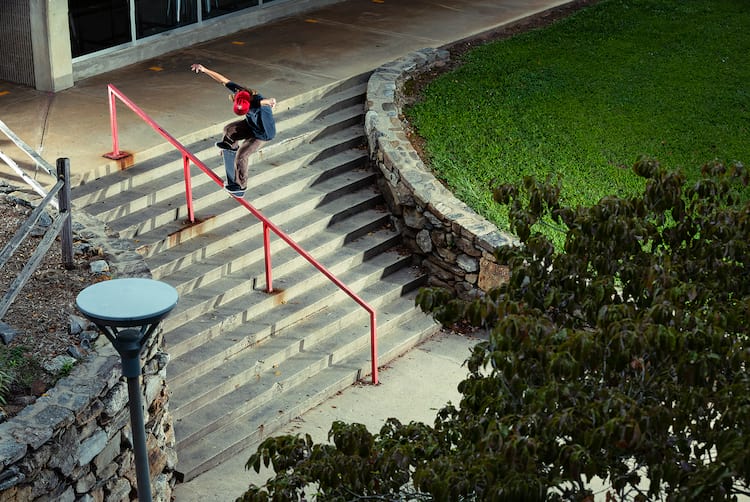 What’s up with the shorts? Any sponsors in the works?
Fuck, I wish. That would be sick. I’ve joked around with Jamie about it.

Is Instagram good or bad?
It’s definitely a great way to get noticed. I do wish skating could go back to the days before Instagram when you had to wait for the magazines and videos to come out. 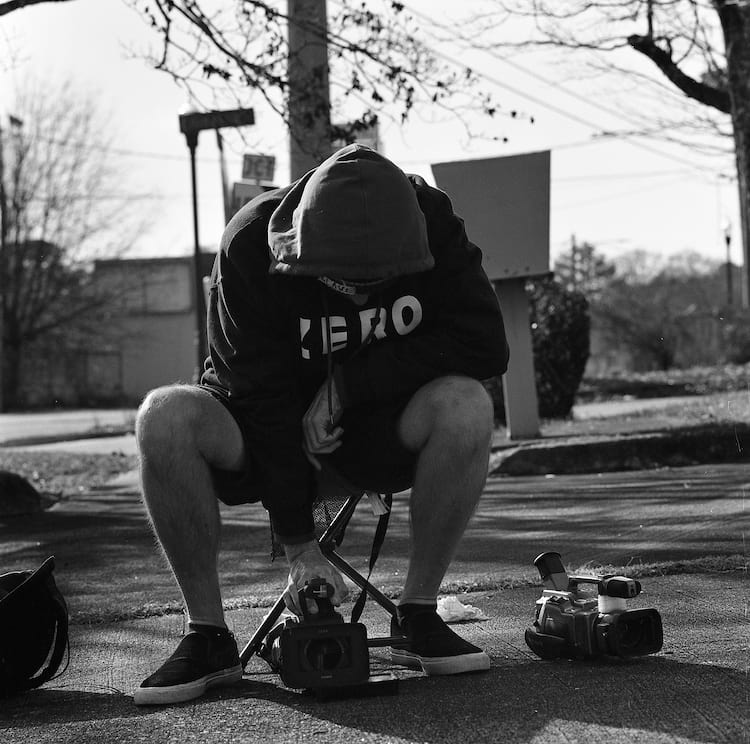 Choosing between HD and SD can be tough, but the shorts vs. pants game is a no-brainer

Tell the people a fun Austin Thongvivong story.
Austin came and stayed with me and filmed practically his whole part in two weeks. I was blown away by how good he was. Even though he said that everything he skated was scary, he’d handle it all really quick. He's such a fun dude to be around. 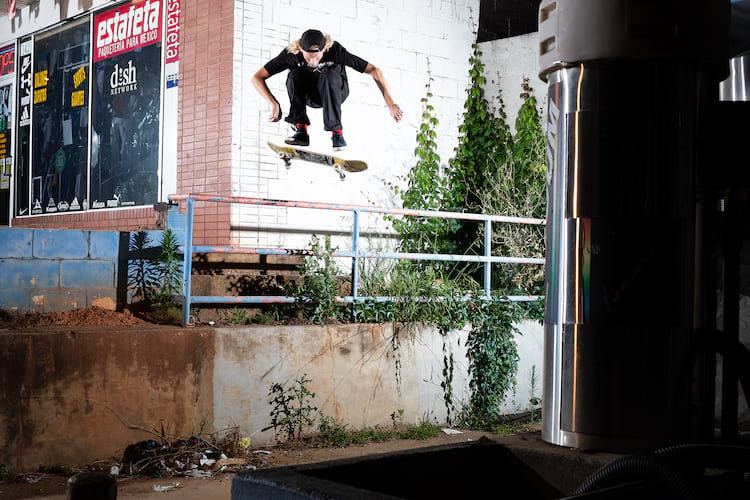 Now that Cinco's done, what’s next?
I'm just going to try to keep the ship rolling and keep the dudes fired up to get clips ‘til the wheels fall off.

Lastly, what’s your all time favorite Zero part?
Tommy Guns’ from the 2006 Zero Promo Video. I still watch that one religiously.

Thanks, Jevans! Congrats again on the video.
Thank you. 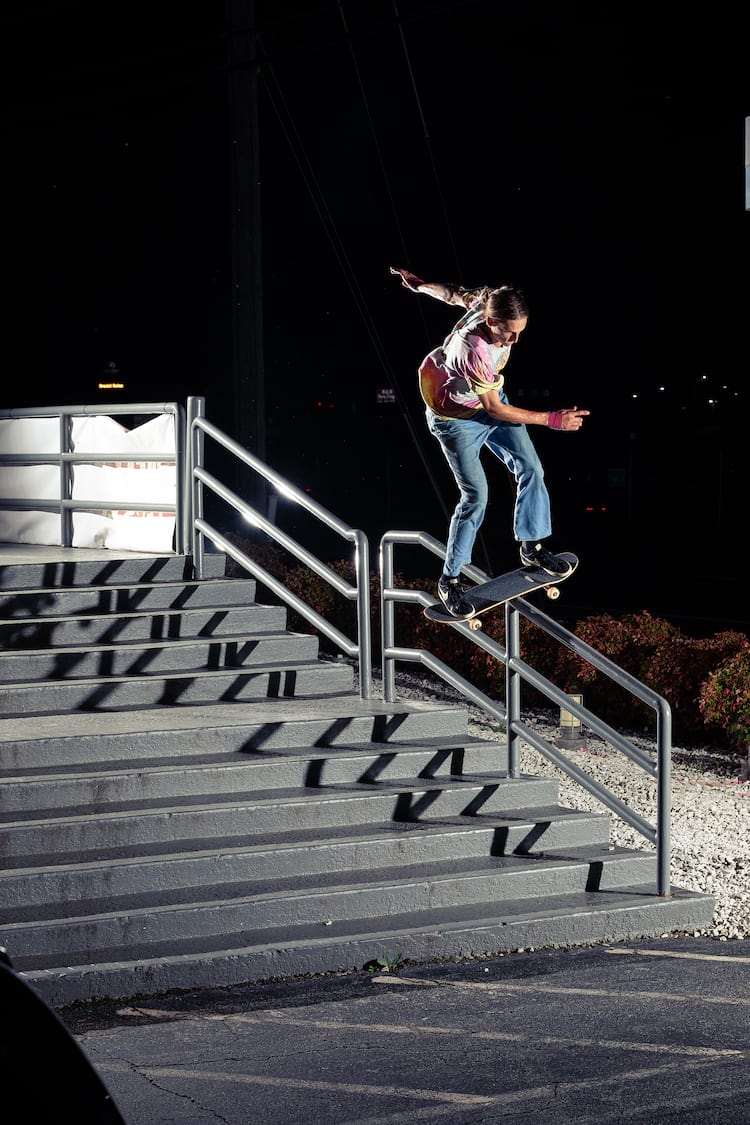 Gap to lip in Atlanta, Sam Sneed's a hell of a crewmate to roll with. Everyone in Cinco is a certified madman, though. Watch it again to get stoked for a stair session
© 1981–2022 High Speed Productions, Inc.