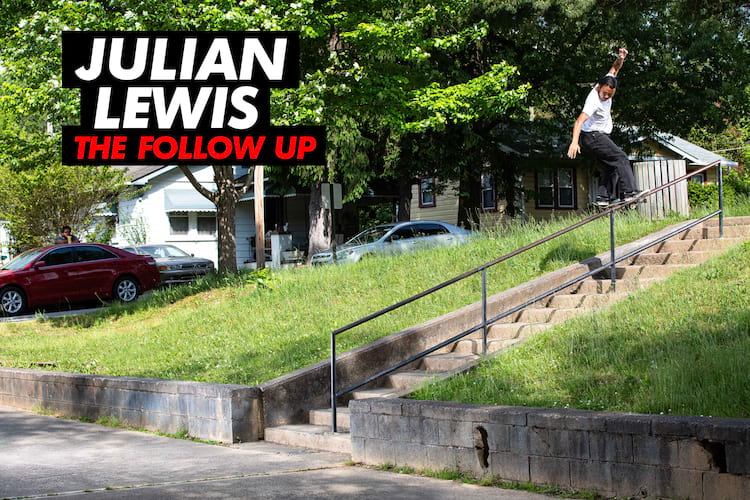 Front boarding a 15 is just the tip of the iceberg     Photo: Pendry

Before I got to know Julian, I thought he was a little too quiet and awkward. Still, Sinclair vouched for him hard and we ended up on a few sessions together. Apparently he was just so in his own head that he didn’t know how to act and didn’t wanna blow it by saying the wrong thing. Fast forward and we’re best buds, releasing his first official video part together. To top it off, you’re about to read our first interview about his social dilemmas, making his own pants and what it’s like to skate with his heroes. —Don Luong

Why don’t we start with some introductions?
My name’s Julian lewis. I’m 24 years old. I live in Long Beach, California, and I'm sad and lonely.

Are you really?
No, I'm just kidding, I'm actually very content at the moment. 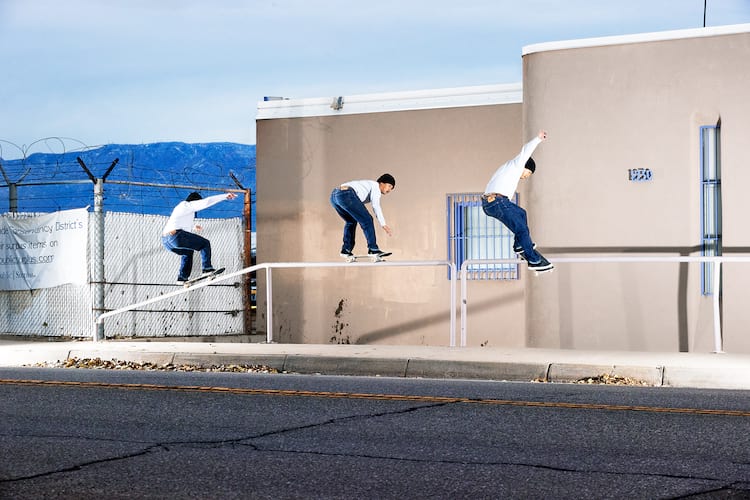 Grind up gap to Smith, as seen in the the Contents spread of our August mag     Photo: Arias

I feel like you have a lot to be content about these days: You got introduced officially to the F, you’ve been traveling, you're in the mag and you have a video part that just dropped.
Yeah, it's definitely a surreal feeling. It's hard to put into words and it's really hard to process or take it all in, but I'm super stoked to be where I'm at right now.

Would you say that the sad and lonely comment kind of encapsulates your sarcastic self-deprecating personality that might get a little misconstrued by people that don’t know you?
I definitely have a self-deprecating way with words that have definitely put me in some awkward situations. I'm just trying to be funny and trying to make my friends laugh, but sometimes the jokes don’t hit how I want them to. 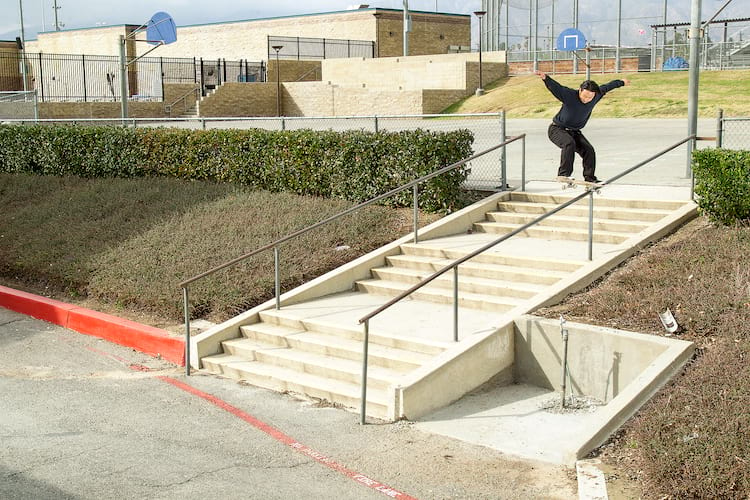 So your last name is Lewis, but you don’t look like a Lewis. What's that about?
Well, I was born in South Korea, but I was adopted when I was 15 months old and I've lived in the States ever since. I don’t know anything about my birth parents. My Korean name is Eui-Joo and that’s how my parents came up with Julian. They just added to the “Joo.” 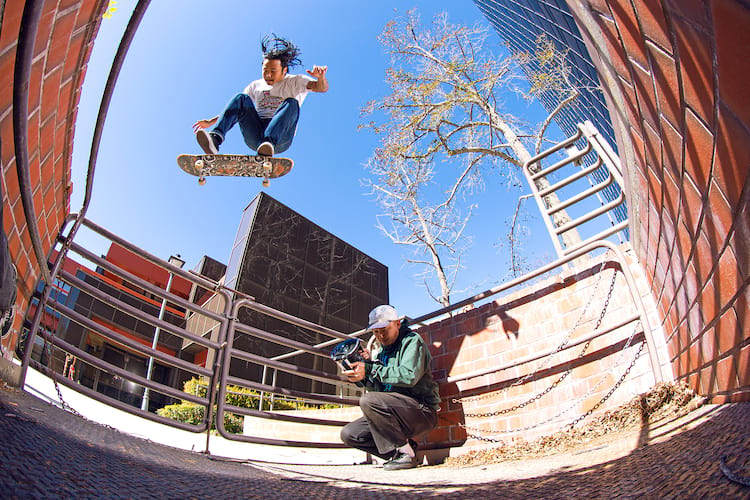 Long-distance travel is nothin' new to Joo, backside flip across and over     Photo: Aguilar

Do you know how to speak Korean?
I've learned a few words from you!
Like what?
Daebak! It means awesome. 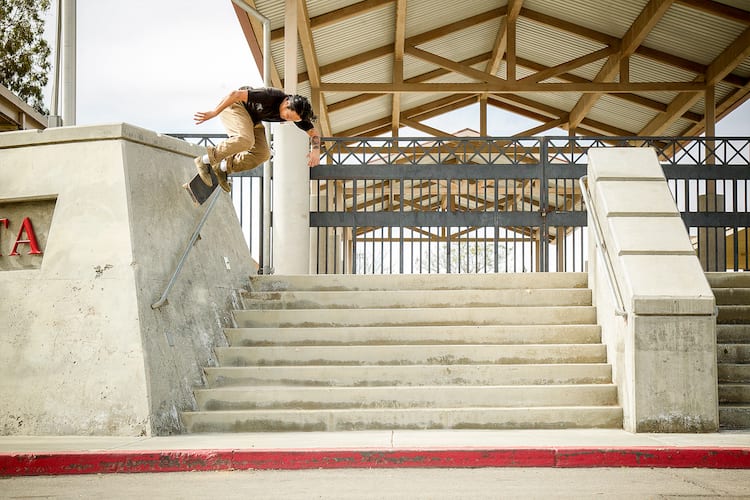 This kickflip to bank bash is deabak!     Photo: Karpinski

I think it's pretty ironic that people categorize you as a West-Coast skater, but you're actually from one of the most East-Coast states possible—Connecticut. What influenced you to choose the rails over the cellar doors.
It was just the videos I grew up watching. Stay Gold made a huge impact on me as a kid. Watching Figgy and Leo chomp on rails made me want to skate like them.

Isn’t it crazy how skating works? You watch guys like Leo as a kid and they are almost these fictional superheroes you see on video and then fast forward a few years later and you're in the van with him laughing and sharing a pizookie?
Maybe in the moment it's hard to realize I'm hanging out with my favorite skaters but there are always those moments, say when we get to a rail and Leo is just rifling off all his classic moves. That’s when it hits the hardest. It's almost an out-of-body experience and I can’t believe that our two paths have crossed and we’re on the same session. 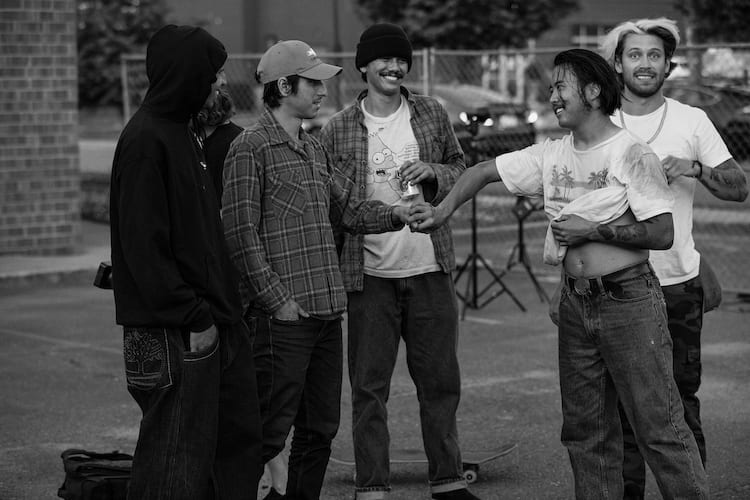 What's one thing you learned about Leo that you were surprised to find out?
Not that I was surprised, but there's a very caring aspect to Leo's personality. He's got a really big heart and he's always down to talk to locals in any city and give anyone the time of day.

What's your favorite thing about living in Long Beach?
Just the abundance of friends and skaters that are always accessible. It feels like a grown-up Woodward. The weather is so perfect year-round and you kind of lose track of time because there aren’t any seasons. It's been three years since I moved here and it feels like I got here last week. The only bad thing is that parking is terrible. I didn’t know how to parallel park when I moved here so I was fucking up cars left and right. 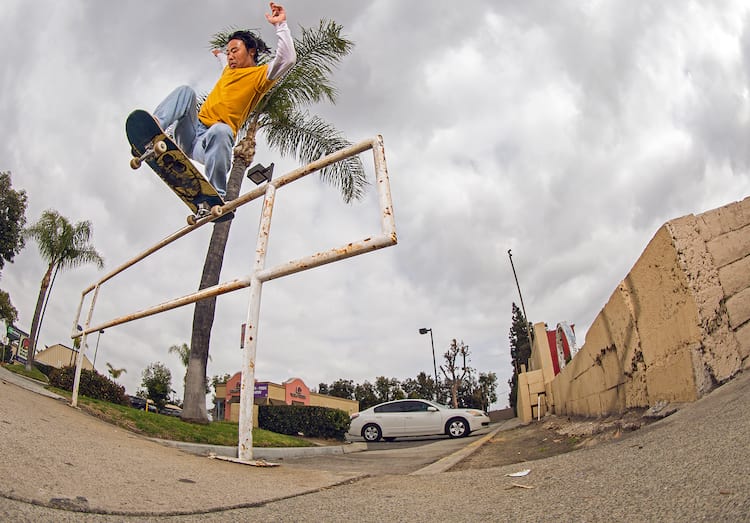 What a lot of people don’t know about you is you have Tourette’s.
Yeah, I would say I have a mild case of Tourette’s now, but it used to be a lot worse when I was a kid. When I first got diagnosed with it, I would have twitches. I would blurt out random words and I had really bad OCD to the extent that if I didn’t do something a specific way, all my ticks would get pretty bad. In school the kids knew I had it and would whisper cuss words in my ear and I would just yell them out—classic South-Park style. 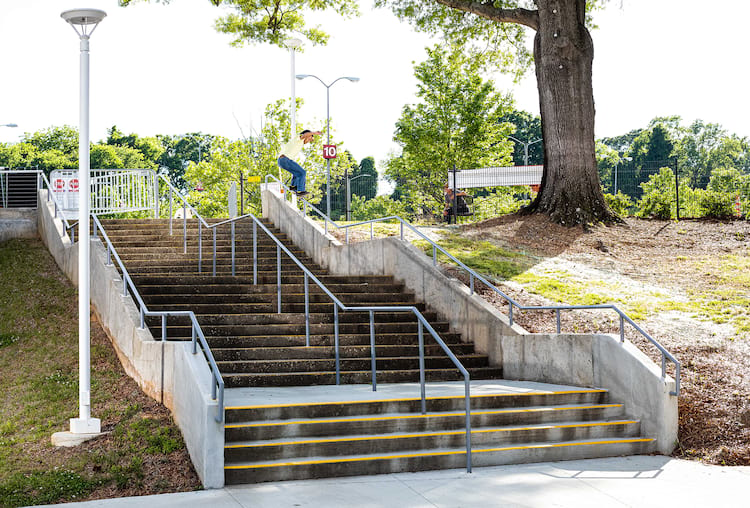 That’s fucked up! Kids are so mean!
I thought It was kinda funny! As of right now, though, I kind of just give a little snort when I get really happy, excited or nervous.

Has Tourette’s ever fucked up your skating?
No, I think people probably make that misconception a lot. I'm not gonna twitch right before an ollie or anything. It's like having an itch and you need to scratch it right away. If I don’t do a certain tick, then I’m gonna feel uneasy until I do it.

Clearing gaps without a dirt bike—gap to manny to sidewalk hop     Photo: Pendry

I wonder if there are any other skaters out there with Tourette’s?
There’s this dirt biker. I forget his name but he was the first person I kind of knew that had it and did gnarly stuff. He kind of inspired me to think, Hey, this guy’s jumping hundred-foot gaps with Tourette’s. I think I can grind a rail or something.

Cody Long is an epic filmer/editor and he has Tourette’s. I always thought that if you had it, that it was a lot more limiting and hindering on your daily life, but after meeting you guys, I'm learning that there's levels to it and it can be managed.
If anything it's more mental than it is physical. I was really insecure about it when I was younger because I didn’t wanna explain myself and I was super embarrassed. I thought I was super weird because of it but it's really mild now and I've learned to live with it a lot easier as I get older. 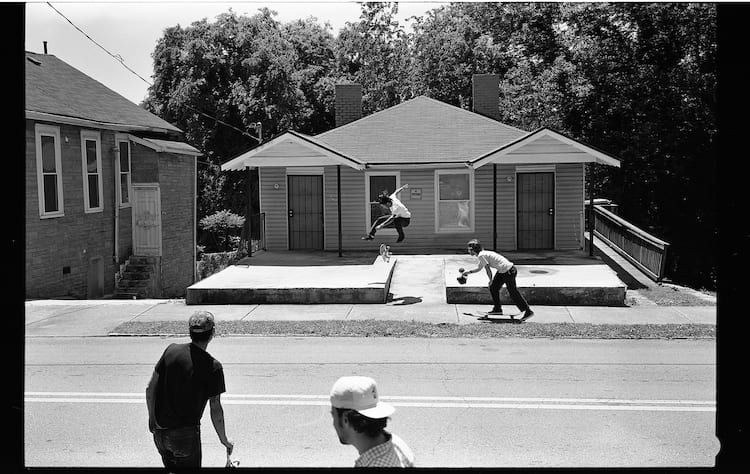 As of lately with your downtime I see you’ve been sewing your own pants. Tell us how that got started?
Well, it all started when I went to this tailor to get my pants hemmed. It gets expensive because skaters go through so many pairs of pants, so I decided to do it myself. I bought a sewing machine and it evolved from hemming, to making hats and eventually my own pants.

How long does one pair of pants take?
I would say about two-to-three sessions per pair of pants. Each session is about a few hours. 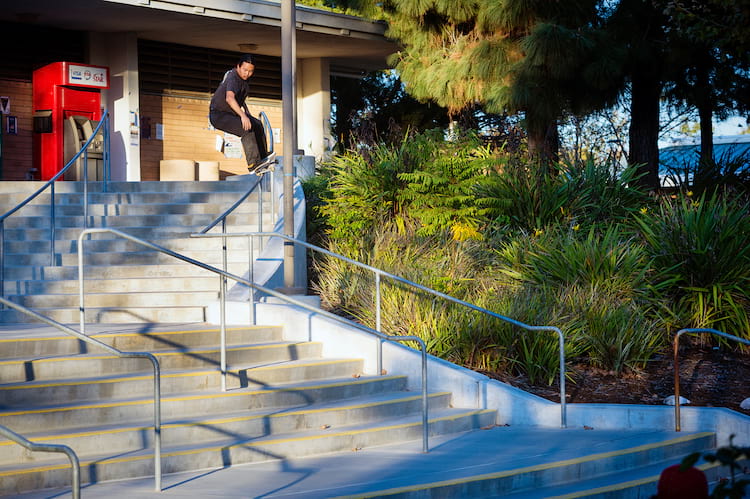 Frontside 50-50 around and down, the pants seem to be working      Photo: Burnett

It seems like a really hard process.
It is and it isn’t. I start with a pair of pants I really like and draw an outline of them. Then you basically just choose a fabric you like, cut it out and just dive right in. YouTube has taught me everything, so I'm learning every day. What I didn’t know at first was there's something called a “seam allowance,” where the pants fold over and you sew them together. You gotta give an extra half inch or so more. That way the pants can match your outline. My first pair ended up turning out way too tight. I just sewed my first zipper too, so I'm hyped!

You gonna make me a pair of pants?
I'm so down. Let's hit a date to the fabric store. 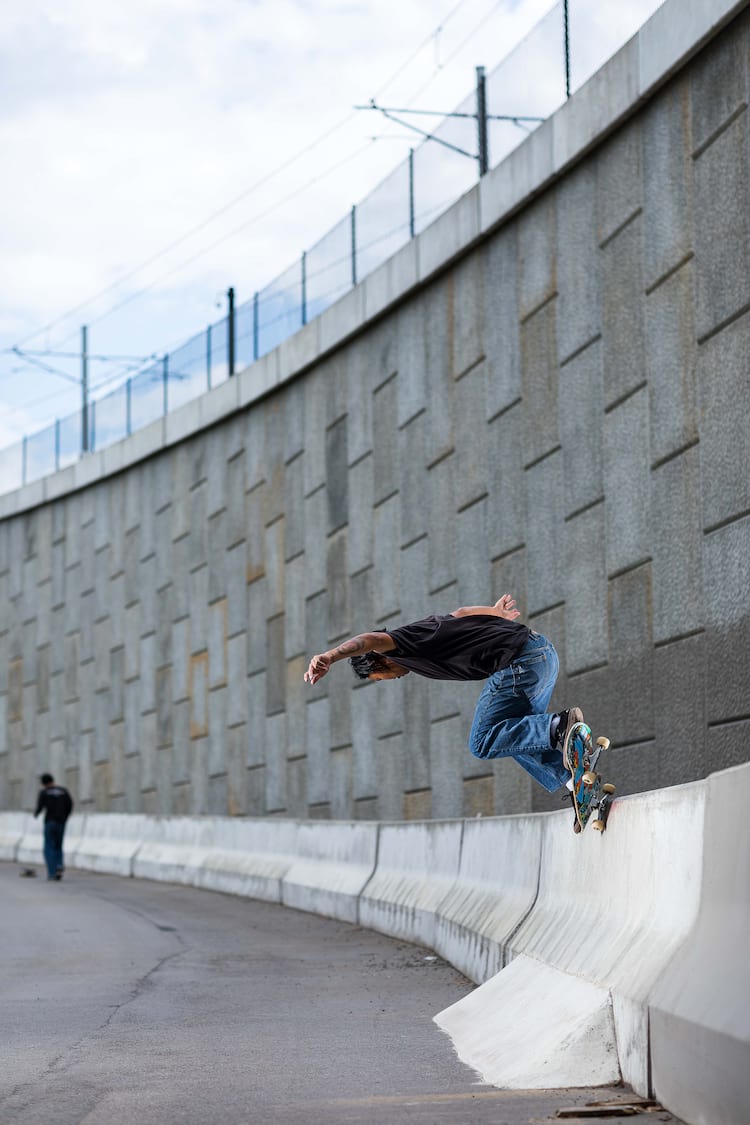 Who's got your favorite pants in skating?
Dustin Henry, Dickson and Leo. It's about how the pants look on the skater's legs when they are skating. Those guys all have different fits but it just looks right when they're on film. 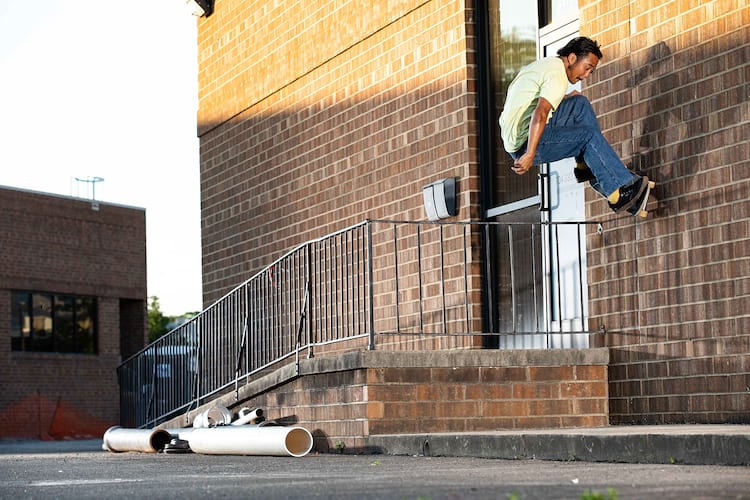 Over the bar and under the sunbeam, frontside wallride    Photo: Pendry

So tell us more about this Foundation video Star & Moon.
All I know is that it's me, Dylan and Corey. It's supposed to be short and sweet. I didn’t really know much about it leading up to its release other than that, which is nice because it was all a surprise. 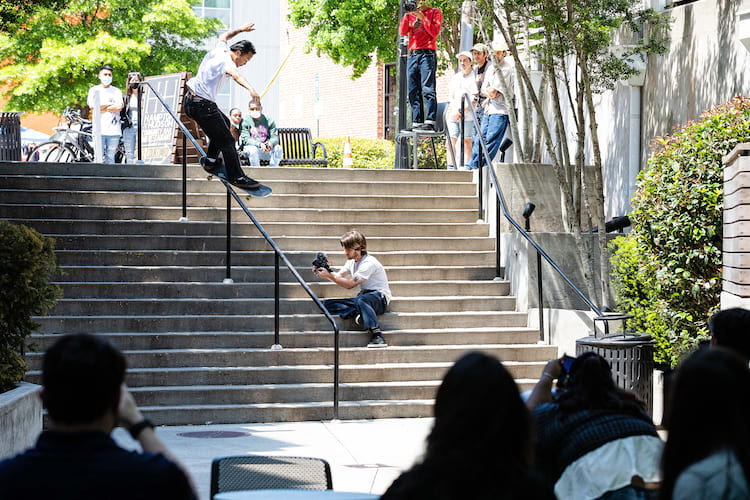 You didn’t wanna see your part before the video came out. Weren’t you nervous I was gonna fuck it up?
Not really. I have full trust in your work. I didn’t even really wanna give you any ideas or songs because I know you'll hold me down. Your work is amazing. 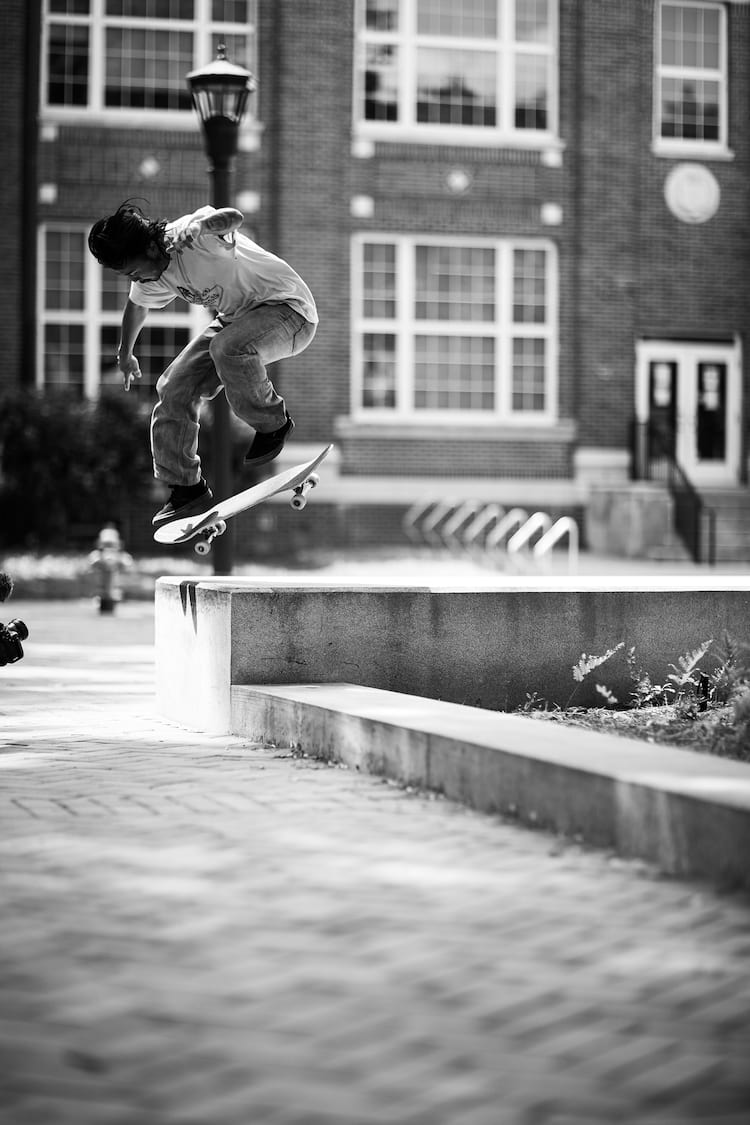 A thougthful rip like Glick, kicky back noseblunt in black and white      Photo: Pendry

Yeah, man, I'm super stoked on it. We all know he has the ability to rail chomp and get gnarly but now he's a lot more thoughtful and out-of-the-box with his skating. How do you feel about his new approach?
It's inspiring. It influenced me to not keep my skating in a box and step out of my comfort zone. It has me trying to look at skating in a different light. It's really cool to see him do a complete switch up, but he's still getting gnarly. He's kind of discovering what he wants and what he likes and just running with it. I will always love rail skating but it's fun to do different tricks and skate different obstacles. 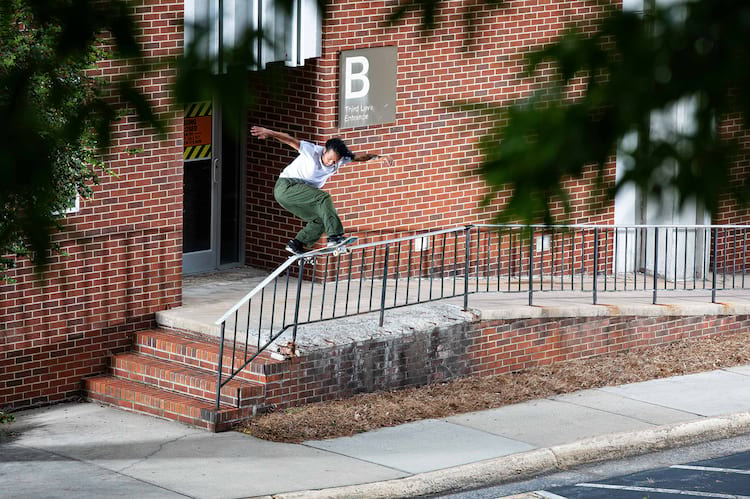 Front board across the comfort zone      Photo: Pendry

Not just in skating but in life, I think it's good to always be evolving and growing. It's what makes life so fun! You don’t wanna stay stagnant for too long.
It's been a couple of years since Souvenir so I'm really excited about this one.

Any last words or shout-outs?
I just wanna say thank you to Sinclair, you, my roommate Van and all my friends. I wouldn’t be here without you all.

What's next for Eui-Joo Lewis?
Hopefully just making pants and getting better at sewing, try to turn it into a side hustle and sell them—just have fun with it. 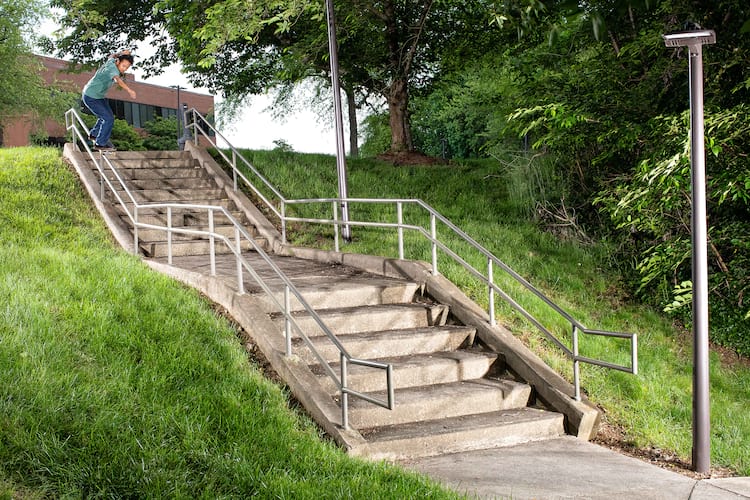 Well, you know we're already filming for the next F video and you're gonna have another full part, right? You down?
I'm over it. 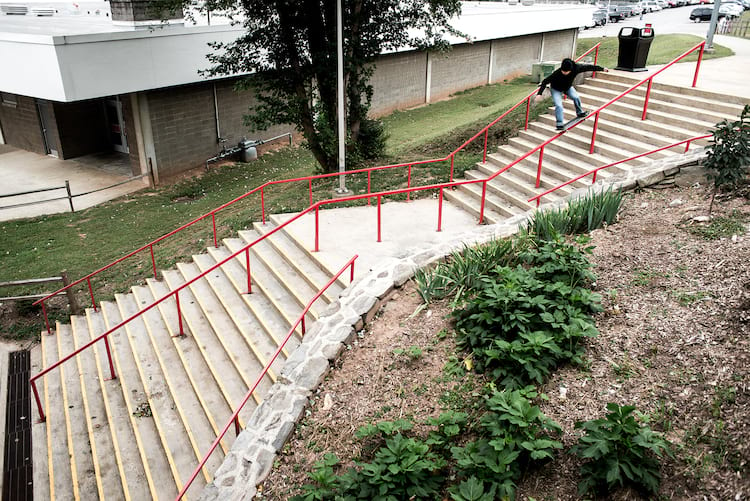 One more ridiculous kinker for the road—frontside 50-50. If you shit your pants watching Julians' Star & Moon part, just hit him up for some fresh ones      Photo: Aponte