If you haven’t watched Lotties Skateshop Must Be Stopped, please quit reading this, get your shit together and make sure we’re all on the same page. We good? Good. Lotties owner Mike Gigliotti caught up with David Clark and Nick Michel to talk about filming for the video, Gonz stories, bleached man buns and mid-90s miniramp footage. You know, all the important stuff. Good job on the vid, guys. Definitely bookmarking it for the digital library. 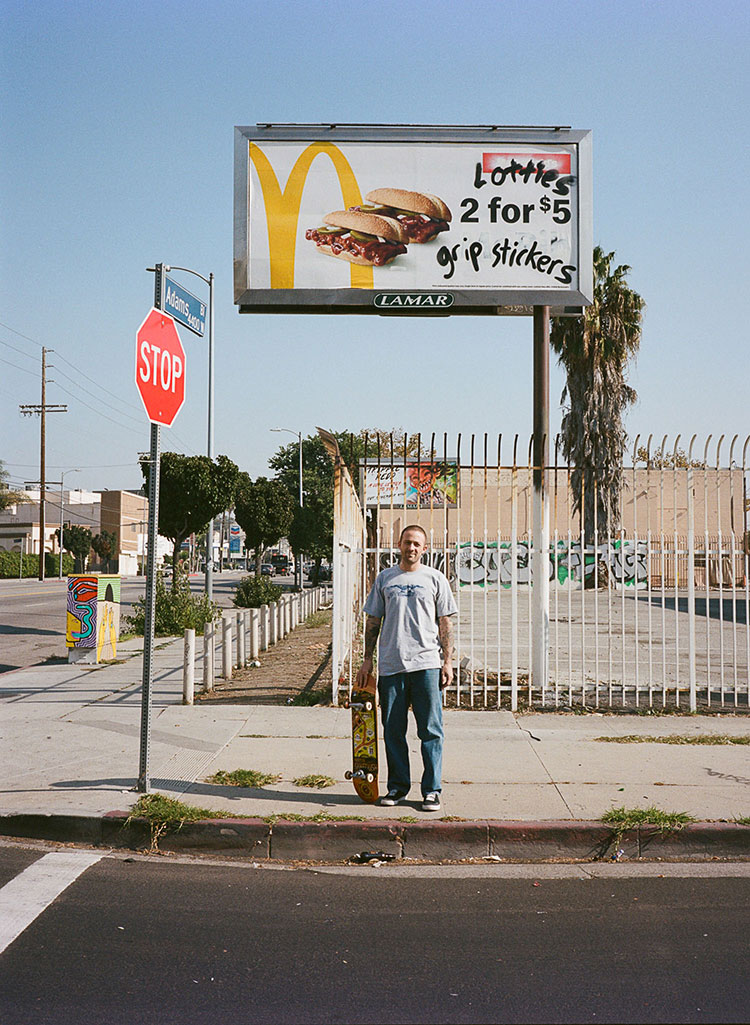 Mike Gigliotti: Did this video stress either of you out?
David Clark: Just filming is stressful. Just trying something for hours and not getting it is such a blow to your mental state. There were some tricks that I really practiced for, then went to try, didn’t get, practiced more and didn’t get again. I would just be shattered, but then would eventually go back and get it. Sometimes. Ha!
Nick Michel: At times maybe trying tricks and stuff, or some days going out with a big crew, but Wheatley would be taking all of us to spots that were only for me because I’d be in town to film. We’re going to spots that I’m supposed to try and skate and no one else is trying to skate, that got to be a little stressful sometimes. 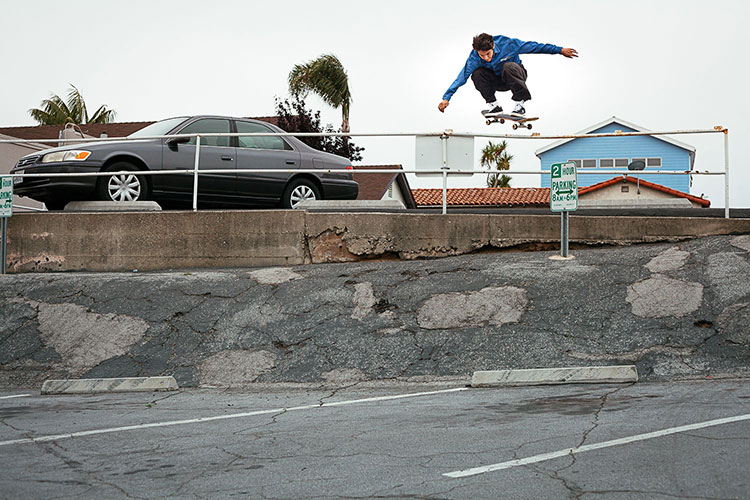 Nick half cabs into some crust     Photo: Burkhardt

NM: David, how do you feel about your footage for this video compared to past footage?
David Clark: I don’t really know what’s in the video right now. I haven’t seen anything since we filmed our first trick together. But Wheatley definitely pushed me to try harder, so I’m excited to see what’s in there. He’s been a good motivator to give me a confidence boost to do some things that maybe I was scared to do. 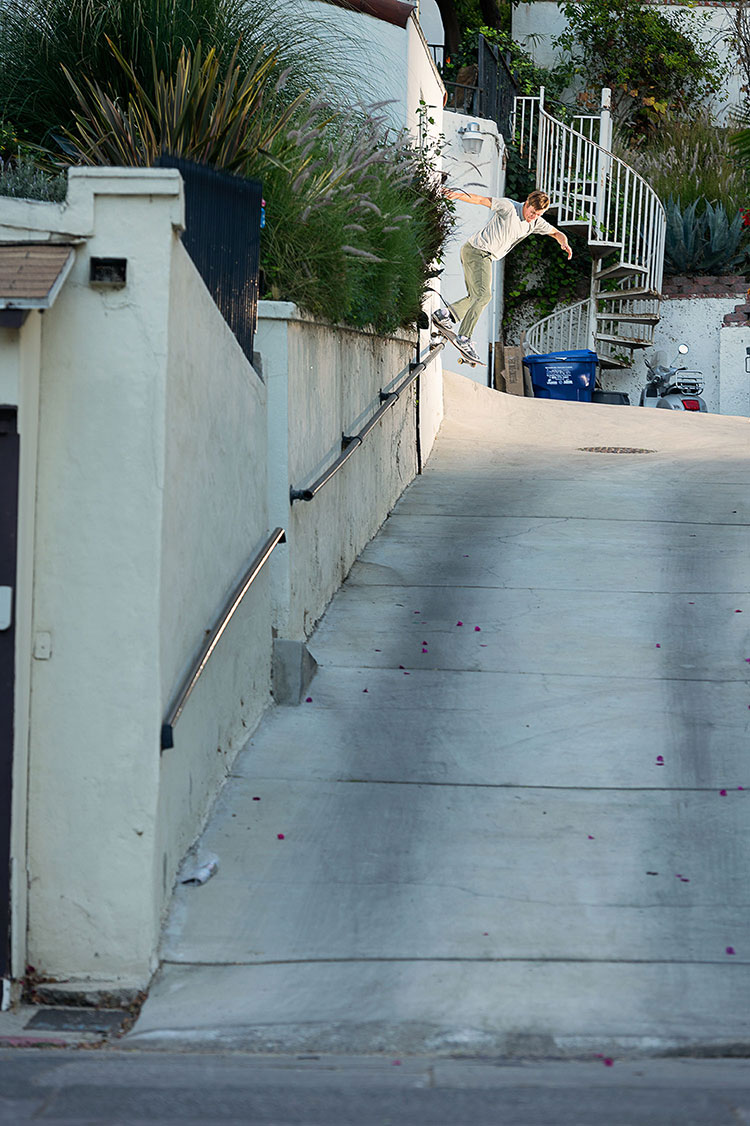 Back Smiths in the Hollywood Hills? David’s down     Photo: Colen

DC: Nick, was there anything you didn’t have the confidence for that you ended up trying anyway?
NM: Yeah, the last thing I did for the video, me and Wheatley went to skate this rail. I’m not really a rail guy, but filming for this whole thing having Daniel there was cool to get pushed. He knows what you’re capable of and it would make me think that I actually could do some of these things and that back lip ended up working out. 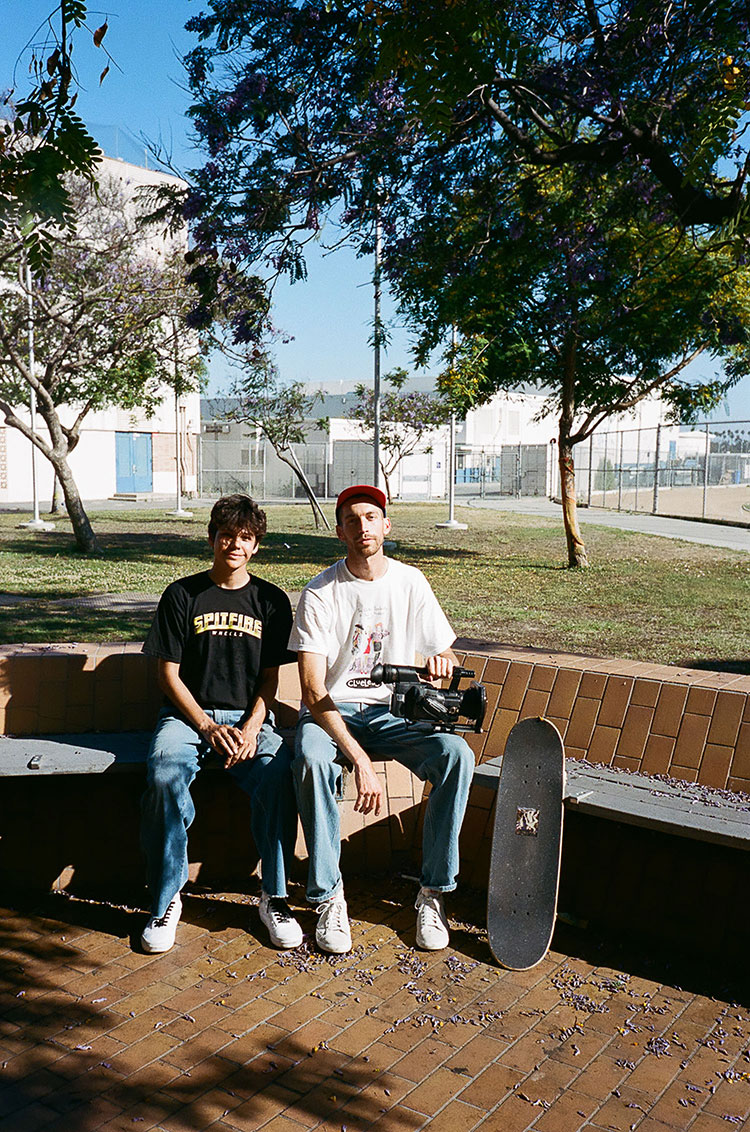 MG: What’s your guys’ favorite place to skate?
DC: Malmö, Sweden. It’s just an epic place. I’ve been a couple times and it’s just insane. Speaking of traveling, Mike, where are we going on the next Lotties trip?
MG: I don’t think I want to go anywhere glamourous. I’ve never been to Seattle and parts of Texas. I really want to go to Seattle. 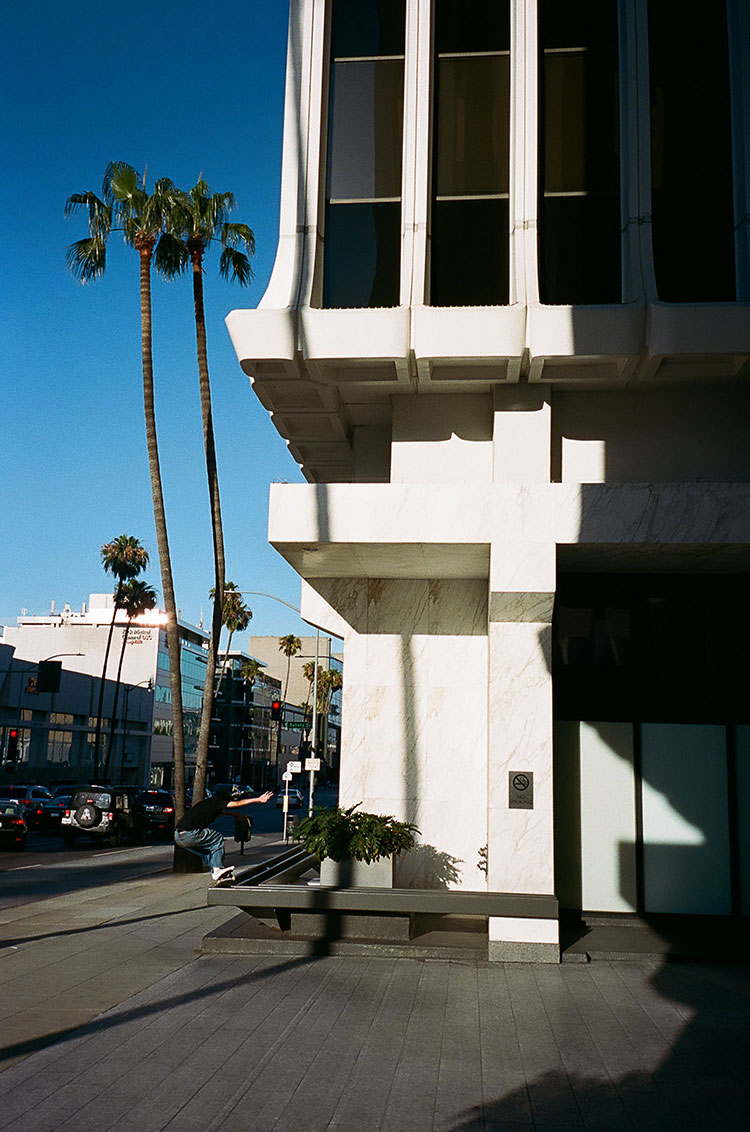 Nick, on the grind in Beverly Hills     Photo: Wheatley

NM: David, how did you meet Mike?
MG: We met when you were in NYC filming for a Krooked video. We don’t have to talk about that, David.
DC: Yeah, that’s a sensitive subject. Ha!
MG: I grew up with Alex Olson and they knew each other through Gonz so we eventually met in NYC. 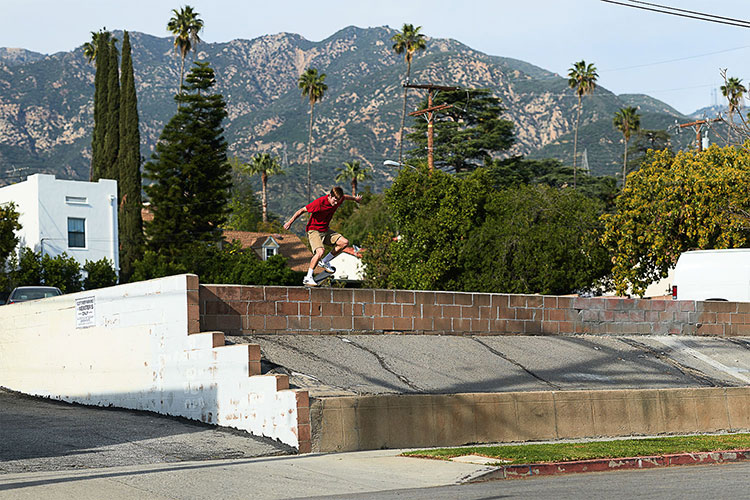 DC: Yeah, we met like ten years ago out there. Mike, which do you like better, LA or NY?
MG: Well, I’m from here but I think it’s more fun to skate in New York. I think it’s harder maybe if you’re a pro and trying to get footage, but I love the convenience element. I’m just on my board more in New York. Some of the things I’m nostalgic for maybe don’t exist anymore, though. I seriously used to have nightmares about leaving New York, that’s how much I didn’t want to leave. Obviously, things change. Skating here has been really fun lately. 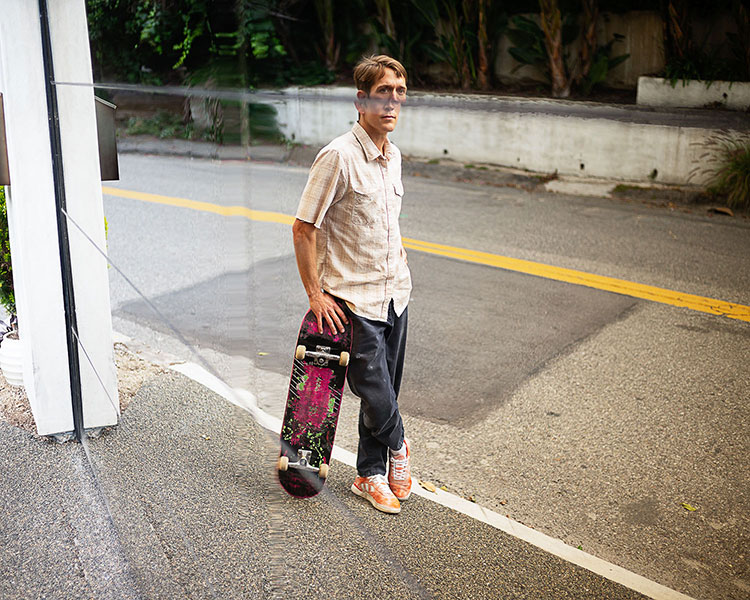 Street Mirror could be a cool band name     Photo: Colen

NM: David do you have a good Gonz story?
DC: Yeah, the first time I ever met Mark was around that Naughty time period. I get off a plane and go straight to his apartment. He answers his door and just goes, “Come in,” and puts headphones on me. He’s been watching Bob Dylan playing some music. He was so stoked on it, and then puts on the Rolling Stones “Wild Horses” video. After those we just went and watched CSI. This is all before exchanging a single word. The next day we’re getting a rental car that he was specifically told not to drive. We get a red Mustang and the first thing Gonz says is, “I’m driving.” 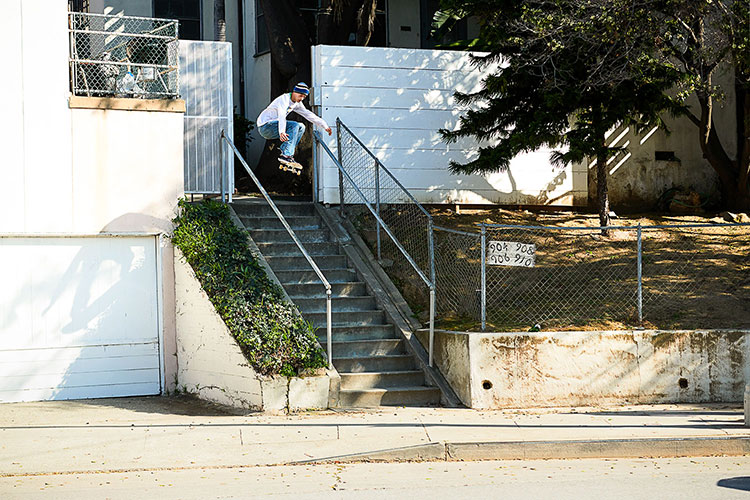 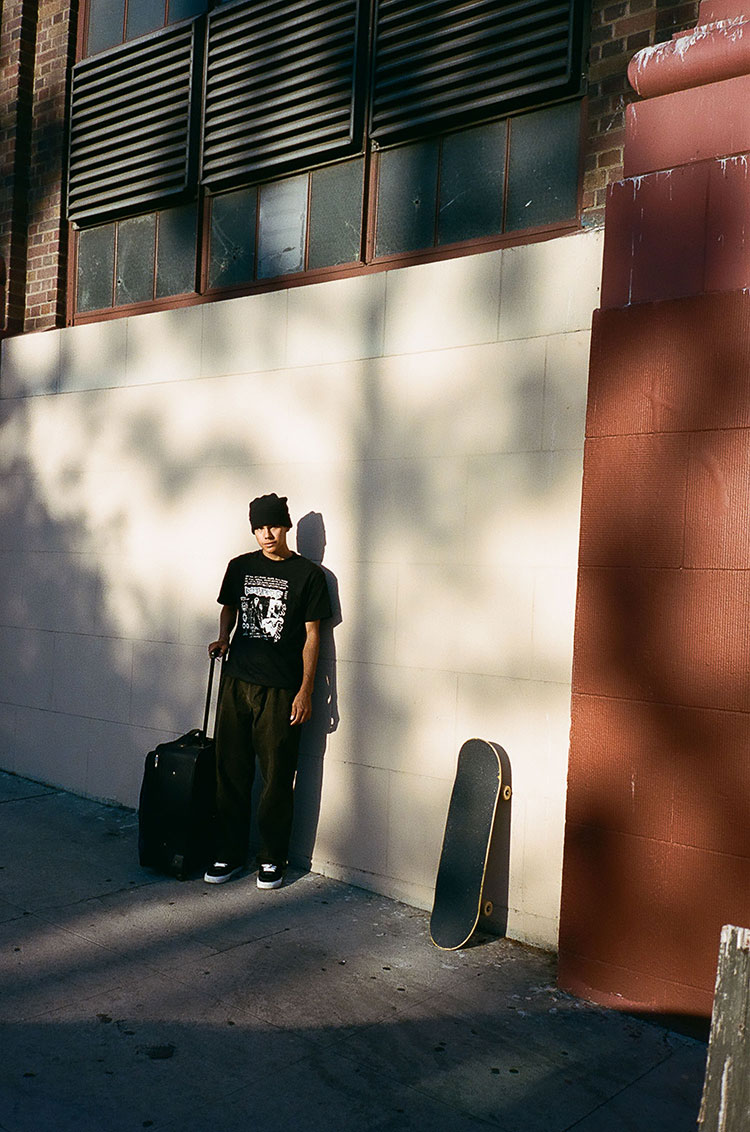 MG: Coming from someone who’s purely a skate fan, I want to know all these kinda questions, like, who is your current favorite skater?
DC: Nik Stain. He’s like a breath of fresh air; A reminder of how execution is important. It’s rad to see that and it’s being glorified. Like, he’s on Supreme. That’s awesome.
MG: He said Nik Stain, so you can’t say Nik Stain.
NM: I think everyone would say Nik Stain. I would. But anything Rowan puts out is great. I’ve been watching a bunch of old shit, too, though—like old Cardiel footage and Wade Speyer, stuff like that. That’s the best shit. Julien Stranger. Antihero shit and mini ramp skating from the mid ‘90s. 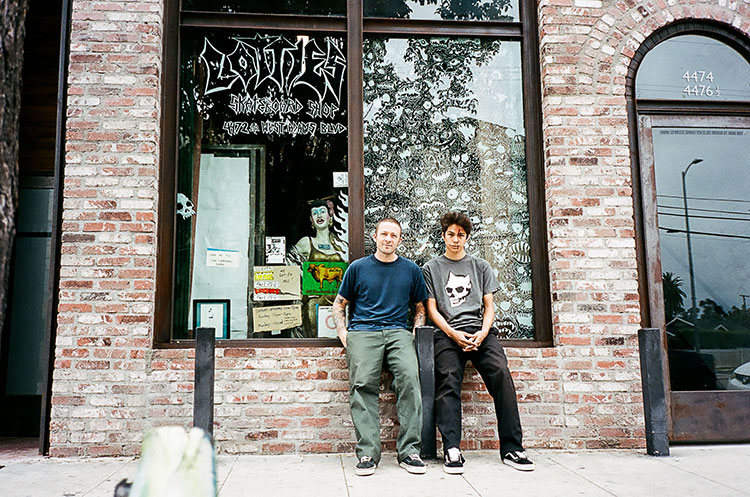 MG: Do you remember the company Innes clothing? Did either of you guys have any?
NM: Is that the brand with the two birds? I think my friend had some. 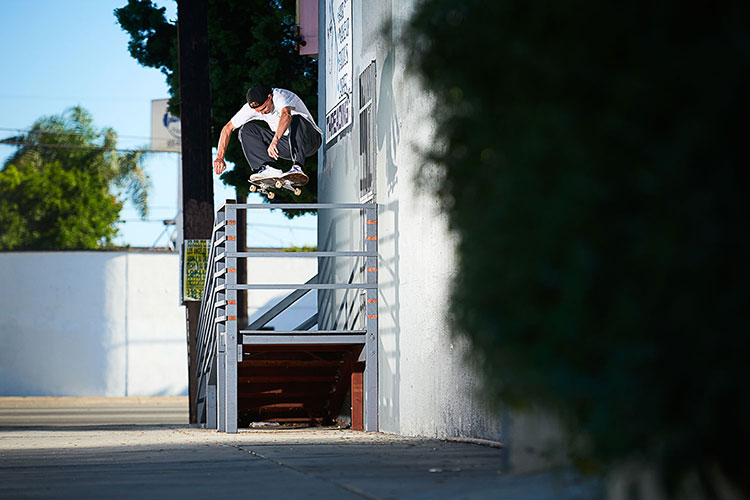 MG: What’s your favorite slide?
DC: Back tail or back noseblunt.
NM: Back lip on a ledge going really fast, slide a long time, pop out in the middle.

MG: Okay, would you rather have a full wetsuit on for a year—you can’t take it off at all. 24/7, 365, or would you have one of the dorkknob man buns, bleached, for five years. Shaved sides and you can’t ever wear a hat. Fully-bleached man bun.
DC: Wetsuit.
NM: Five years is a long time. No one would take you serious. I’m going wetsuit.

MG: What’s next for both of you guys?
DC: I’m moving back to Atlanta, going to school, skating the same amount.
NM: Just skating, traveling a lot more now. The Lotties trip to Montreal was my first time out of the country. I ended up meeting Johnny Layton at the Dime contest. He invited me on a Vans trip and I left the Lotties trip and went right onto my first Vans trip. Ever since that one, it’s just kept going. 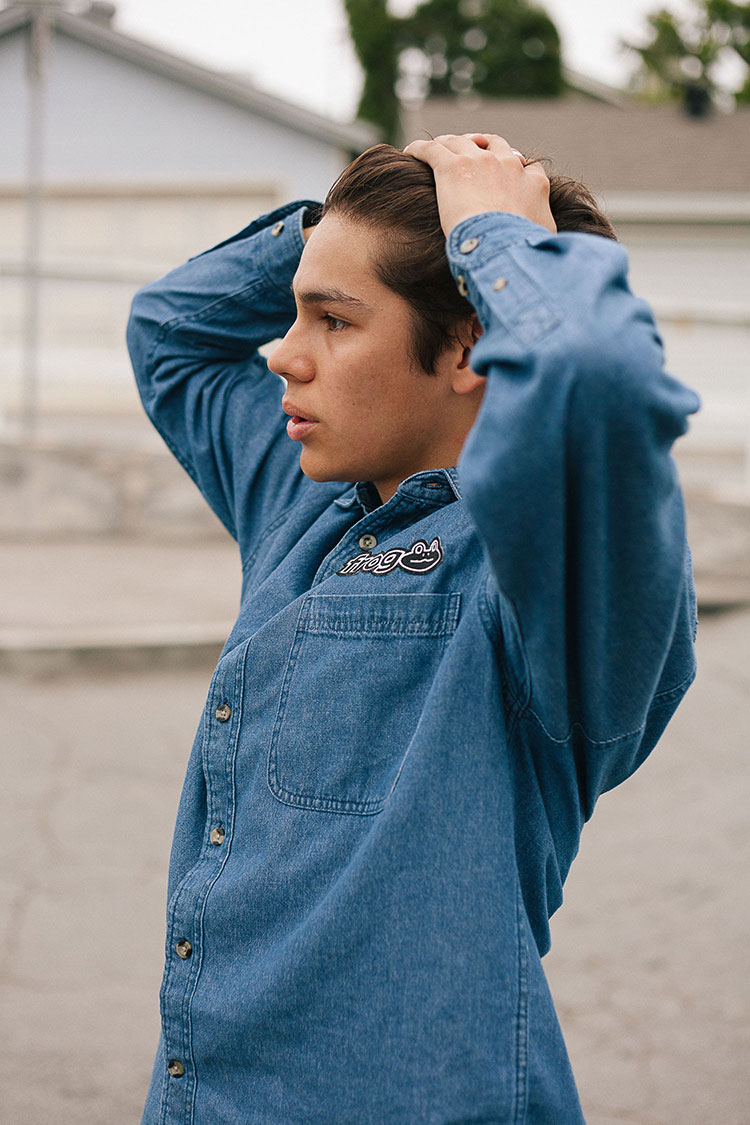 “If he’s got two first names, you know he’s going to be good”– Figgy, regarding Nick Michel    Photo: Burkhardt