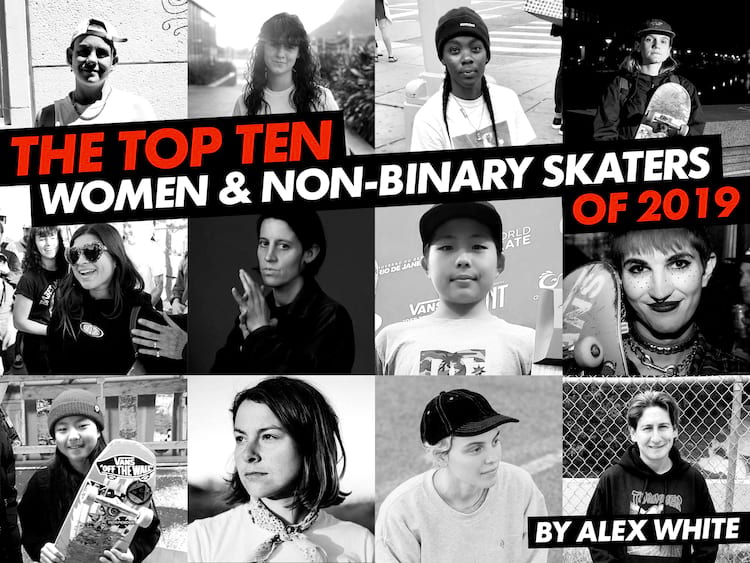 Two-thousand-nineteen was an explosive year for skateboarding, with women and non-gender-binary* skaters absolutely crushing it. Mainstream video parts, ground-breaking tricks, pro boards and good ol’ fashion no-fucks-given ripping in the streets—here’s the best of the best for 2019. —Alex White*
*For those that don’t know, non-binary means a person who doesn’t identify as male or female
*Alex White is a brand manager for Krux, commentator and also a woman

A classic overachiever, Alexis Sablone doesn’t sleep. She started off 2019 with her Thrasher interview with Elissa Steamer asking the hard-hitting questions like, “Why do you like to smell books?” and “How gay are you?” She even kickflipped the triangle gap in Miami. On the art front, Alexis created a series of boards and a bounty of beautiful, weird animations for WKND video projects like Death Dance. To further prove the point that she doesn’t sleep, Sablone filmed a fast-pushing, night-skating edit through the streets of NYC for the release of her Converse colorway, filmed by Josh Stewart. And to top it off she’s doing all of this while being the most veteran skater on the USA Olympic Skateboarding team.

Bonus Award: For always skating exactly how she wants, even in cringy contest settings 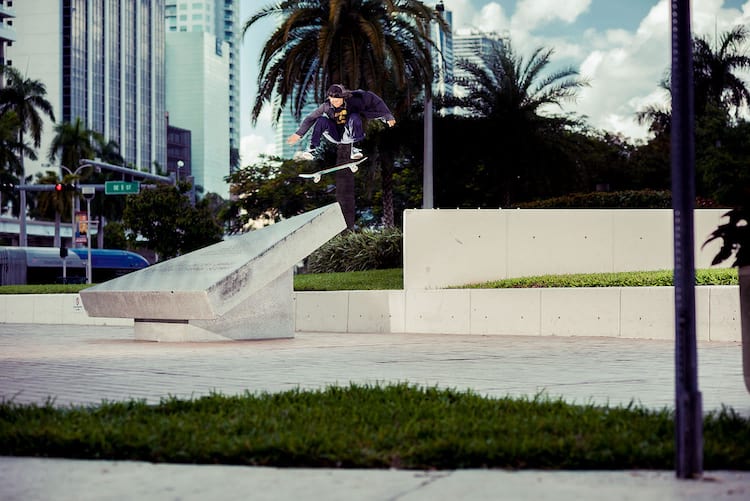 Building on the foundation laid by Elissa in Welcome to Hell, Alexis kickflips into the triangle     Photo: Papke

With Nike SB’s Gizmo, The Bake cooked up their first full part since 2017’s smashing My World, filmed by Tyler Smolinski. Leo was also featured in a Miley Cyrus video, spoke on panels at the Wheels of Fortune and Pushing Boarders events and is working on a bio doc with Giovanni Reda.

Bonus Award: For being so hot this year they had to change their name… twice 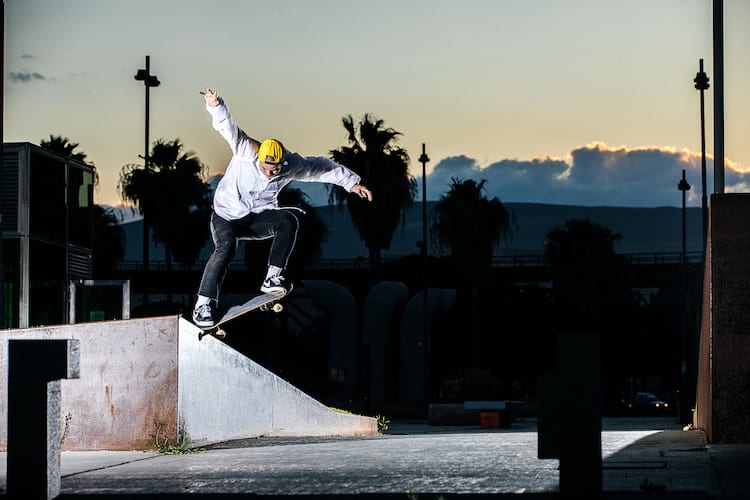 Always a pleasure to see Leo moving up, this crooked grind is no exception     Photo: McGuire

I guess the surf has been flat at Ocean Beach because Elissa Steamer produced more skate footage in 2019 than in the five years prior. The mother of Gnarhunters had the anchor part in Gizmo, a ripping part in Baker 4, a Candyland appearance and an interview in Thrasher’s "Over It" article about drugs, sobriety and her long career as a pro skateboarder.

Bonus Award: For getting the Antihero dudes to go surfing 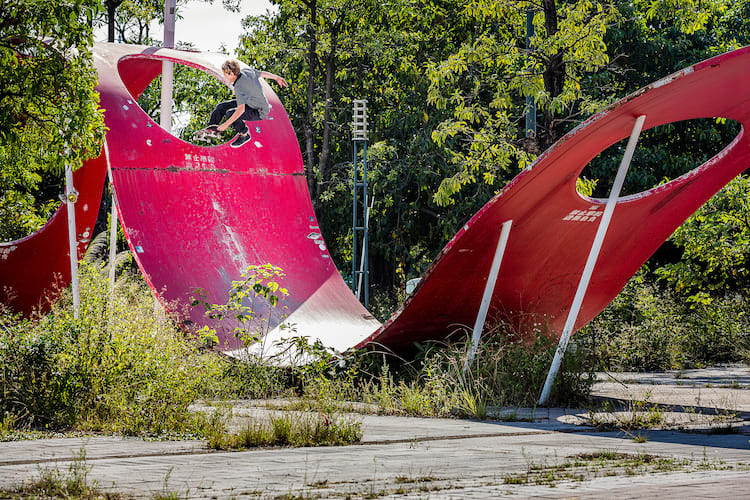 Not slowing down anytime soon, Elissa hits a bean plant to tail on a giant cornhole board     Photo: McGuire

The only female skater nominated for Thrasher’s SOTY 2019, the Lavender Lady had a stand-out part in Welcome’s Seance video, started an alcoholic kombucha company called JuneShine and dropped her signature unisex clothing line with adidas. 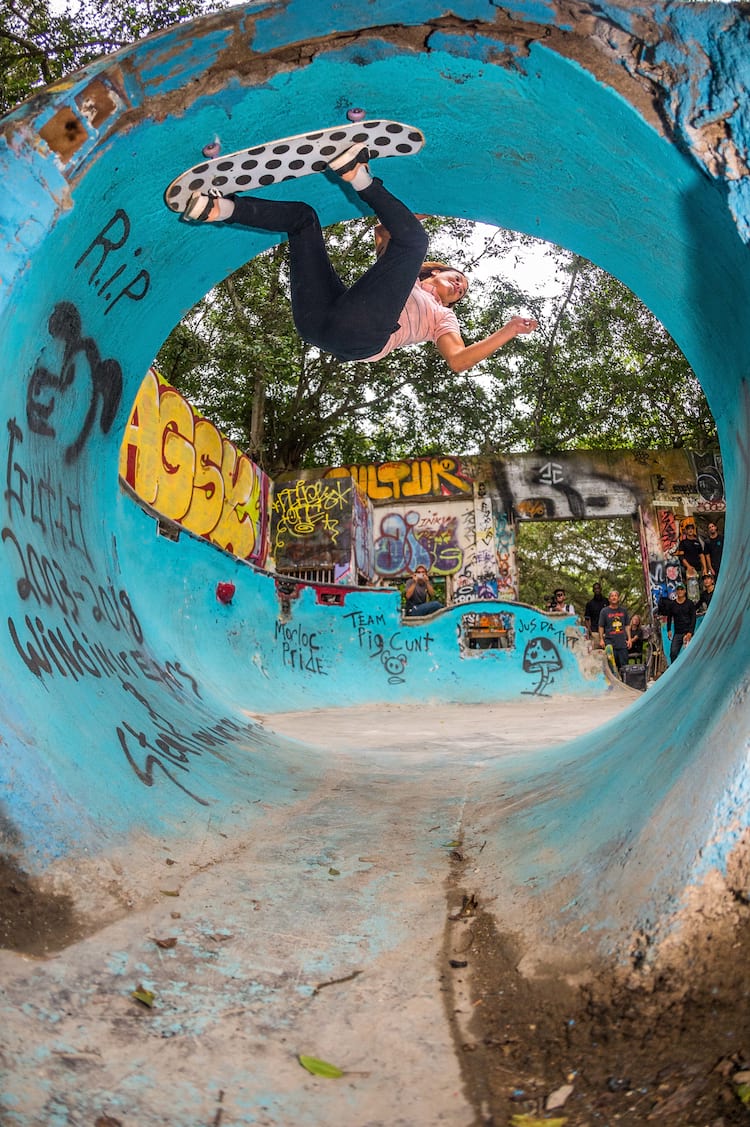 All around tremendous skate sorceress, Nora defies the laws of physics     Photo: Brook

Fabiana spent all of 2019 in a van squished between sweaty dudes filming for Vans and on Santa Cruz’s Til the End tour. The sister-half of the Delfino duo turned pro alongside her big bro Pedro at Bust or Bail. Full-throttle Fabi can’t be stopped.

Bonus Award: For the biggest swellbows of all the people on this list 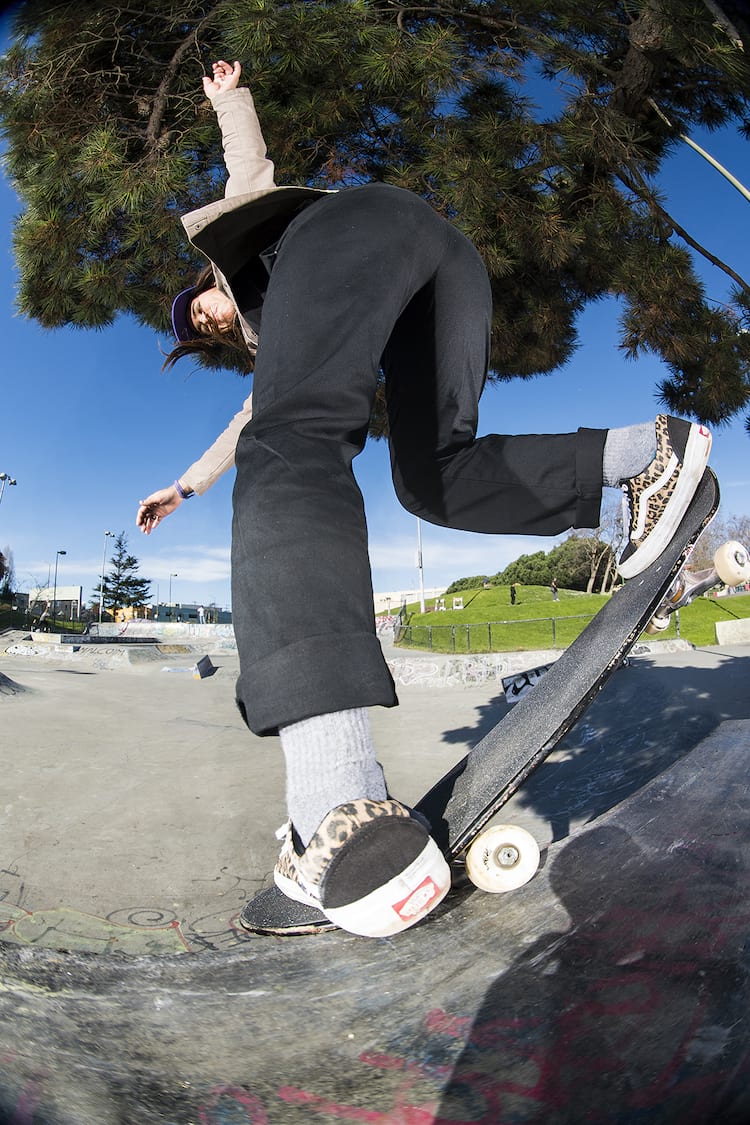 Fabi takes a break from the sweat stench of the van to get a nosegrind at Potrero     Photo: Palozzolo

Lesbian puns aside, being the first Girl on Girl Skateboards is a hell of an achievement. Breezy teased us with a part in the Skate Witches video THX, Vans’ Arms Wide Open and other little edits in 2019. Then she ended her year by joining the boys on Thrasher's Am Scramble trip. Two-thousand-twenty looks easy, breezy, beautiful for the Canadian tech goth.

Bonus Award: For breaking my glasses at Wheels of Fortune and spitting cake in my face 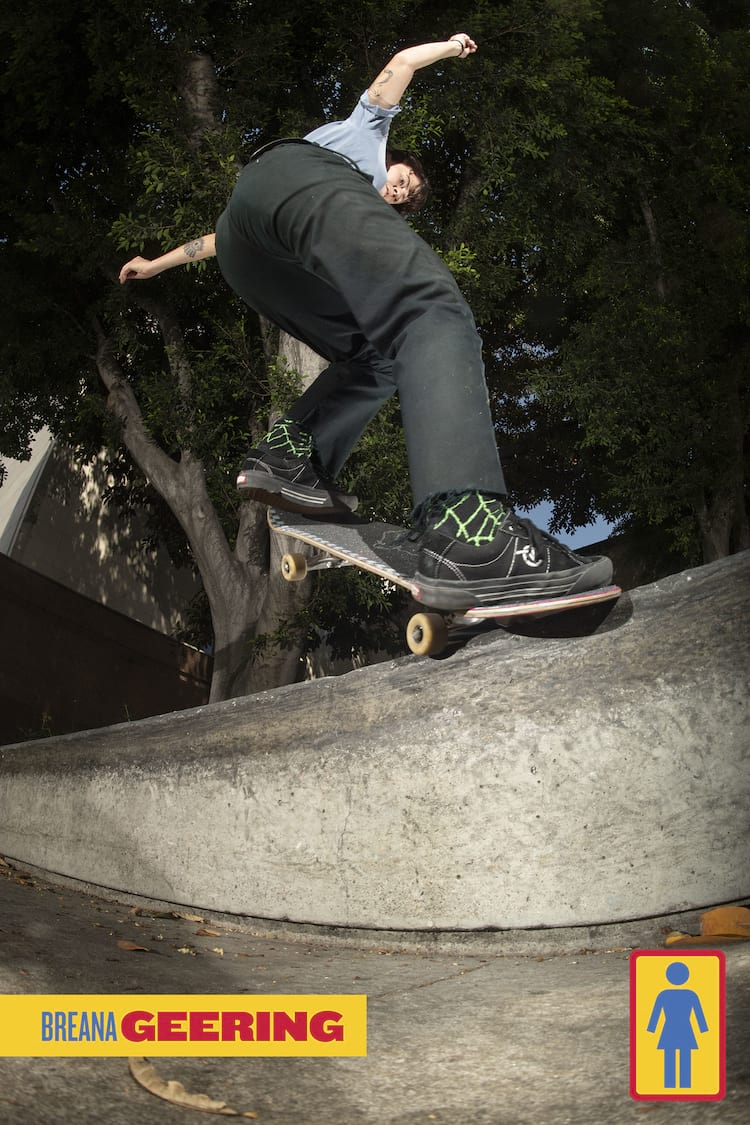 Save the play on words. Just get hyped on the first Girl ad introducing a sick skater to the team     Photo: Blabac

After a good year of smooth skating and solid lines in NYC, Beatrice broke through the Fairfax Ave velvet rope and onto the big screen for Supreme’s Candyland. Bea also dropped a bomb little part for Venture. 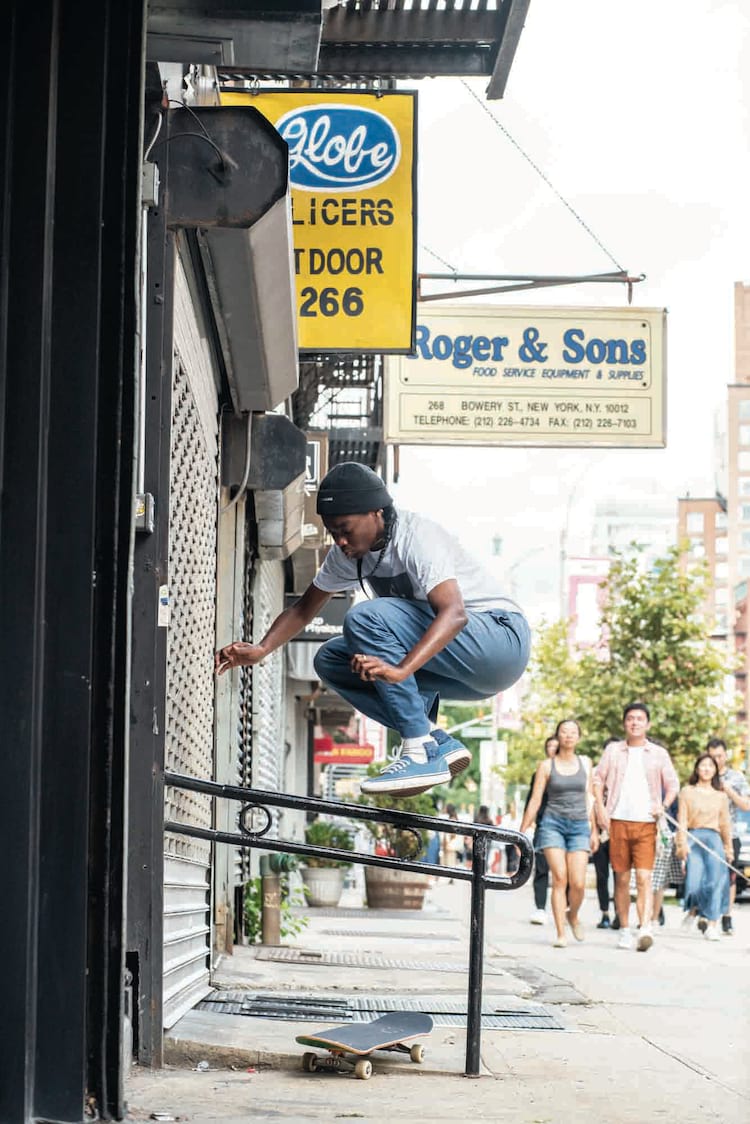 Not letting the tourists distract her, Beatrice hippie jumps clear over the high bar     Photo: Shafer

The Bay Area double-threat punker had a steady stream of Instagram clips to start the year, followed by her tear-jerking mini-doc. While off the board, she tore through underground punk scene with her band Twompsax. Finally, the skate world at large got to see her shine in Supreme's Candyland. Rumor has it, she said that was her first appearance in a skate video ever. That's one hell of a year.

Bonus Award: For reminding me I love the movie Clueless so goddamn much 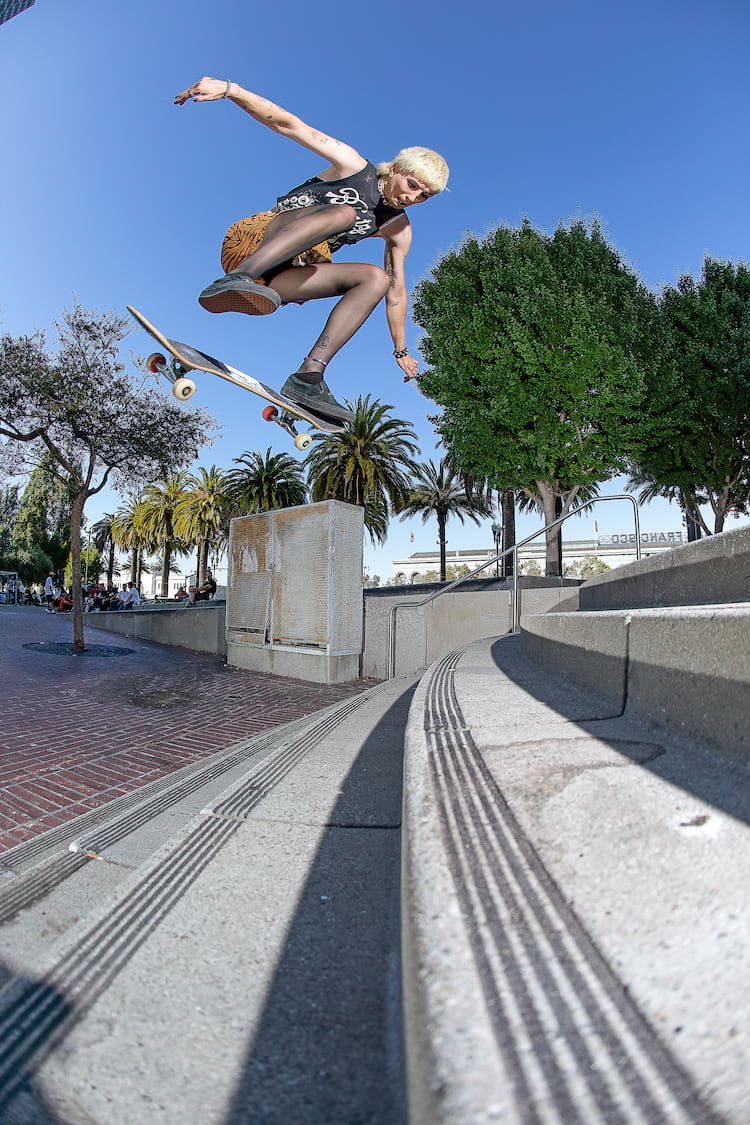 As seen in our December, 2019 issue, Cher puts a proper backside heelflip down on the iconic EMB stairs     Photo: Atiba

I’m pretty sure Kebs is lying under a gravity blanket soaked in lavender essential oils trying to recover from 2019. Along with being the Executive Director of Skate Like A Girl for more than a decade, she conducted all the Gizmo interviews, podcasted with Vent City, Released a new Skate Witches zine, was invited to speak at, like, ten panels and even skated in the X Games. Keb’s part in Pump on This is a testament to the weekend warriors, sandwiching hours to film with Sk8rat’s Shane Aukland around work trips. Well done, Kebs! Now back to work. 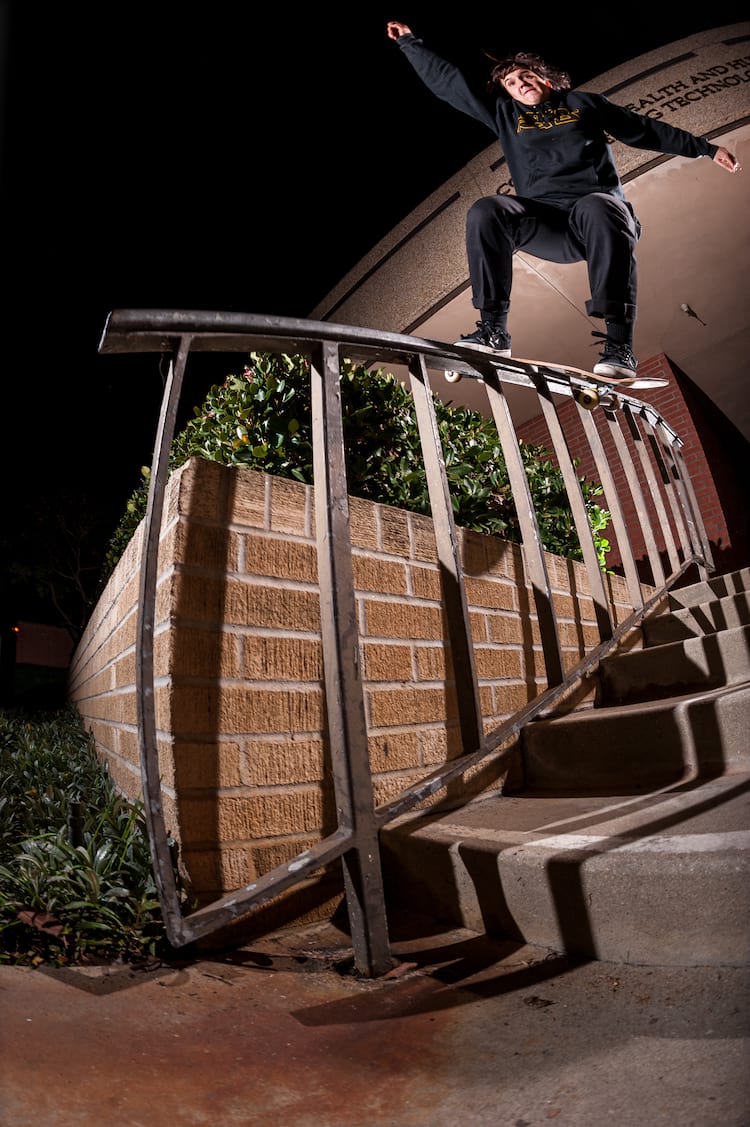 After finsihing one of her 50 events and pushing the culture forward, Kristin still somehow finds time for a night mission     Photo: Seidler

My little sister Shari White’s Portal Series explores Havana and Malmö through her VX lens. Shari also had a full part in Pump on This, filmed the new Skate Witches video THX and is currently filming the new Vans video. Damn, Shari, save some MiniDV tapes for the rest of us.

Bonus Award: For only having an Australian accent after two Coronas 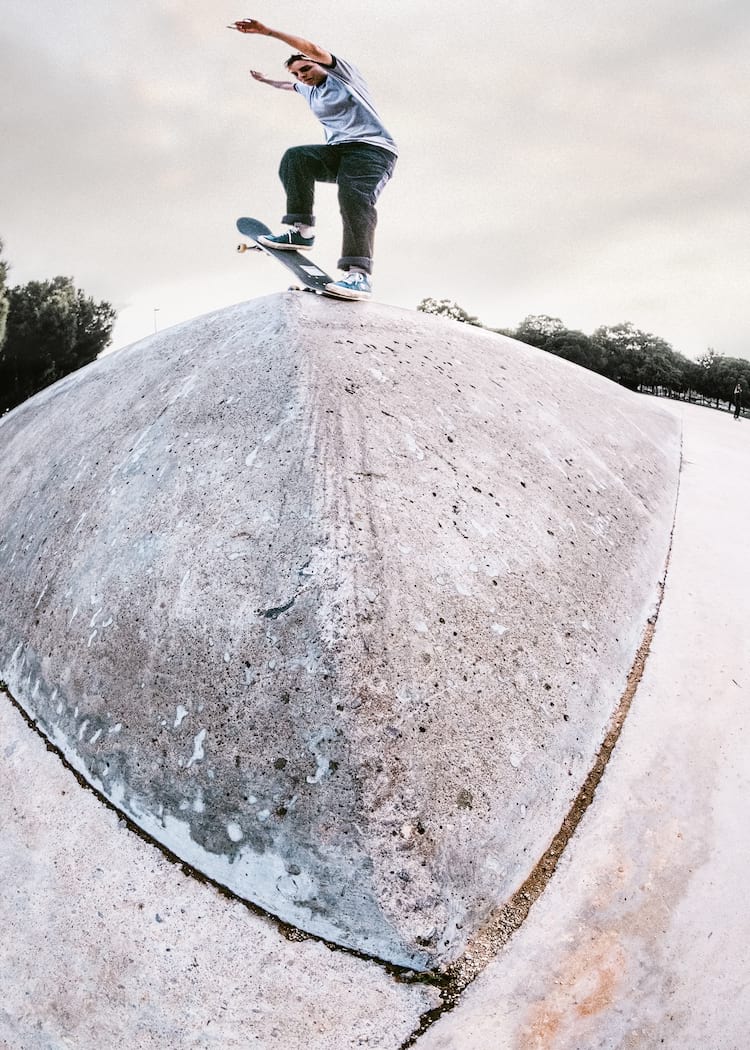 Stepping in front of the camera, skate witch and all around badass, Shari takes this backside bluntslide from one bank to the other     Photo: Ibarra

Honorable Mentions:Misugu Okamoto & Cocona Hiraki
Have you ever seen an 11-year-old nosegrind through the corner of the Combi? Cocona used her balancing act to secure a bunch of podiums and a win at the Vans Park Series in Paris. Meanwhile, Misugo has some saucy swagger and a mean 540. Legend has it, Eric Dressen discovered her as a 13-year-old baby training in a secret bunker in Japan and immediately put her on Santa Cruz. The future is female, and as far as coping-crushing terror, Japanese!

Bonus award: For pretending to not speak English so she doesn’t have to do post-win interviews 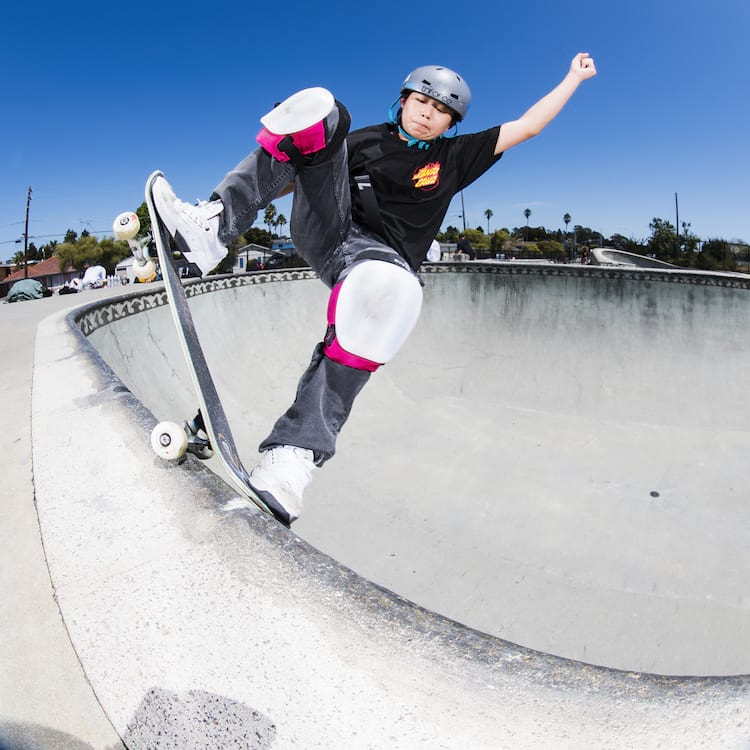 Misugu Okamoto pops this frontside nosegrind into the concrete bowl not long before blasting a 540 on the opposite wall     Photo: Palozzolo 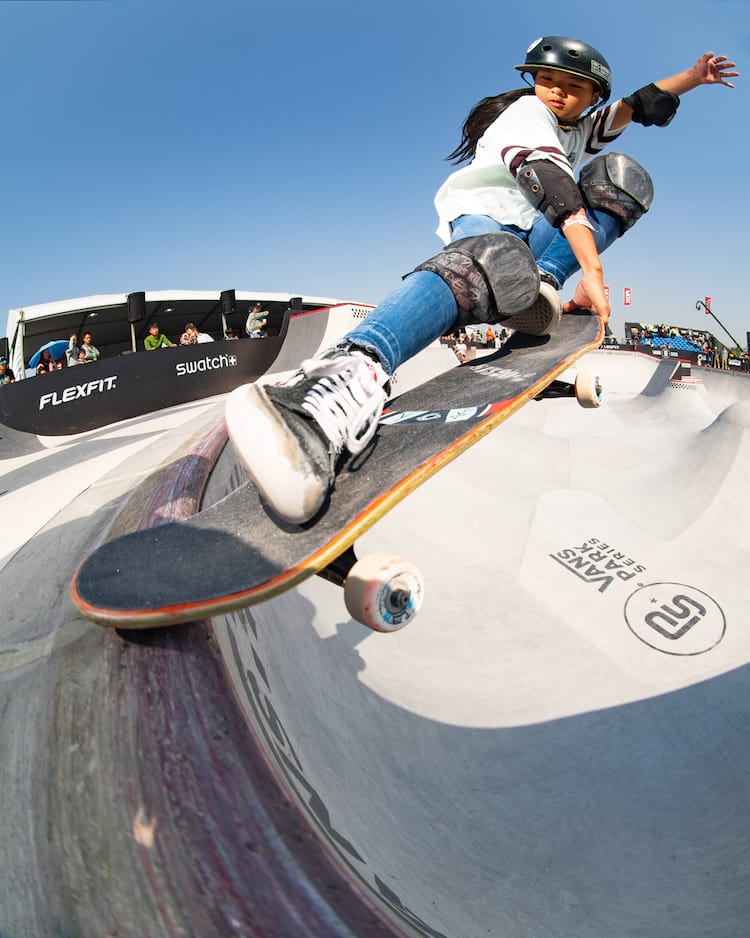 Most kids her age would just slide on their butts if they saw this quarterpipe, but Cocona isn't playing around. She slides a frontside crail with style     Photo: Acosta

The other skaters of Nike SB’s Gizmo With full parts from Sarah Meurle, Leticia Bufoni, Aori Nishimura, Nicole Hause, Josie Millard, Hayley Wilson and Elissa Steamer, the skaters of Gizmo are a no-brainer for a 2019 honorable mention.

Bonus Award: To Amy Ram for diving into a swimming pool with no water


Maité SteenhoudtA flamboyant and fun Belgian skater broke onto the American radar this year with Element’s Maité part. She’s like the Euro-Nora or Euora? Anyway, Maité is serious skating without taking yourself too seriously.

Bonus Award: For getting the whole crew involved in your breakout part