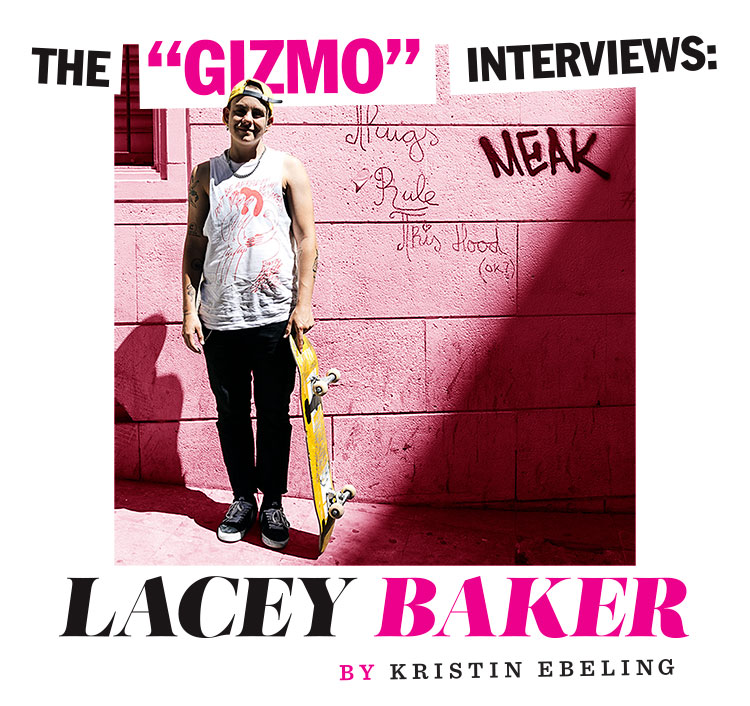 In case you haven’t heard, over the past year Nike has been working on a new video comprised of an eclectic group of skateboarders from around the globe. Some are Olympic hopefuls, some are as young as 17 and others are pursuing their own creative endeavors. But what truly sets this video apart is that none of the skaters featured are named Frank, Joe or Steve. Welcome to 2019! Nike’s next skate video project will be all street, and all women, featuring household names such as Leticia Bufoni, Lacey Baker and Elissa Steamer as well as up-and-comers Hayley Wilson, Sarah Meurle, Aori Nishimura and Josie Millard. And although we don’t know exactly where skateboarding is heading in terms of gender equity, what is known is that these skaters rip! That much we can all agree upon.

Lacey Baker has put out some of the most technical and stylish footage ever seen, inspiring a global audience of women, queer and male skaters from around the globe. And despite also being a two-time world champion, she still has a humble outlook and wants to continue to create more space for non-traditional skateboarders.

So how does it feel to be a woman in skating?
Well, I have a vagina, and if I do a kickflip, it’s still there.

Ha! What are you up to today? What’s going on?
Today I skated Cooper and then I had some food. I got a smoothie. I think I’m going to go to the gym and do some physical therapy. I’m still getting my ankle back to 100 percent. It’s been a slow process.

What happened to your ankle?
I was out in LA all of February trying to film for the Nike video. I rolled my front ankle trying a back tail kickflip out. Luckily I landed it before that, but I was trying to do it better and rolled it. Right away I definitely knew I was going to be out for at least a few weeks. It happened in the middle of February and now it’s April and I’m just starting to feel strong again. So it’s pretty humbling. Gotta put the work in when you hit age 27, I guess. 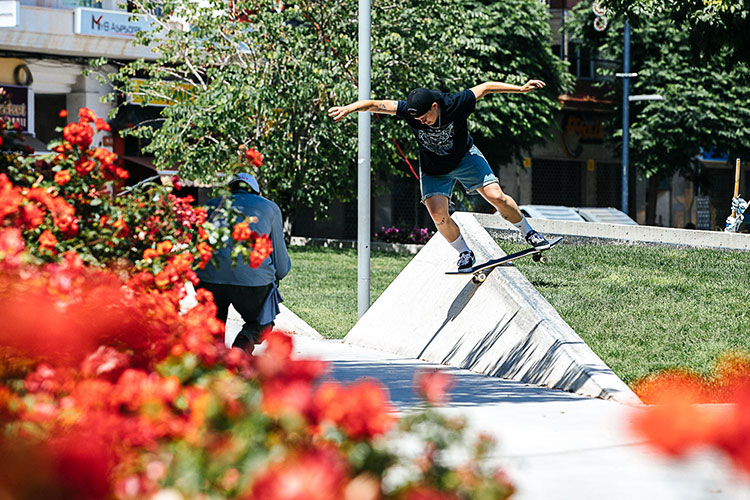 Yeah, your body’s not as resilient as you get older. Also, classic skateboarding filming—trying to do the trick bette, and you get hurt.
Yeah, you’re, like, I could do it again. And then you’re, like, No, I can’t actually. JK!

What kind of sprain are we talking about here?
I never rolled it like this before. This one was right between my ankle bone and heel, around the back of my ankle. So there was some weird pain near by Achilles tendon. The other day I was trying a 50-50 and I had to step off and I tweaked it.

What kind of PT have you been doing? Do you have a trainer?
I just started working with a trainer and there’s a guy Nick who works out of LA. He helps some of the Nike athletes, so he gave me a list of exercises. I’ve been doing a lot of basic stuff—squats and stuff to get my hips strong. I’m doing what they tell me do and it seems to be working.

Regarding this Nike video, how do you feel about a bigger brand earmarking resources for a project like this?
It’s been an amazing opportunity to go film street skating in places like Spain and China. That part of it is really cool. Having a brand like Nike get behind this movement—it was only grassroots for so long, and now it’s not. It feels like there’s real progress happening. This is what I’ve been fighting for the whole time I’ve been skating, so I want to keep that ball rolling and it’s cool to be with a company that’s behind that.

We’re truly running of things to complain about, so that’s cool.
Ha! Good job, skateboarding. We’re getting there. 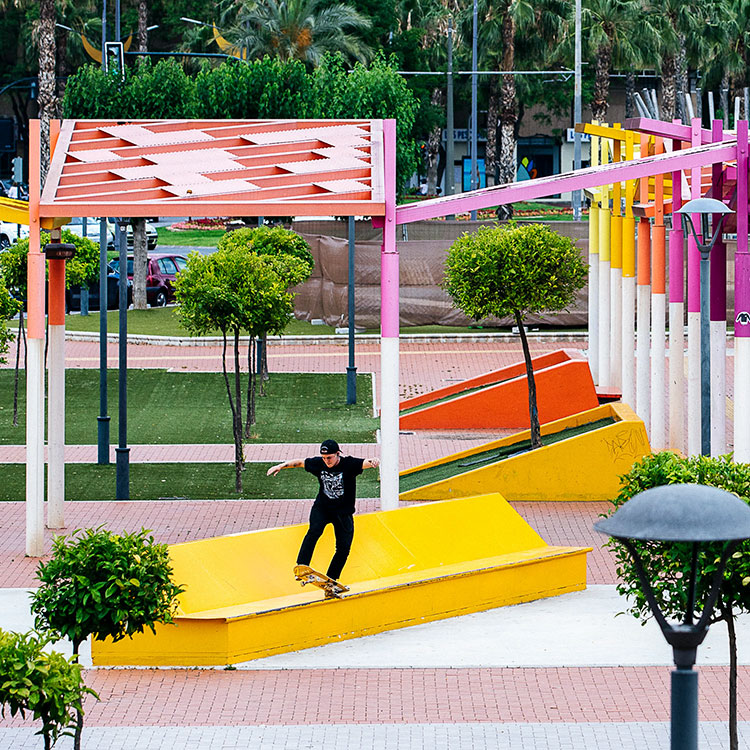 Keeping the ball rolling on a backside 5-0. No complaints here

What was it like going on the trips for this video?
There was a routine, like, wake up and meet downstairs at 11, get in the van and you’re going to hit spots until the sun goes down. It was really draining, but awesome and fun. China was my favorite place to skate, not necessarily to visit, but the spots were so incredible so that was so much fun. That trip felt like it was the most productive, for me. I also got clips in LA and New York, mainly with Tyler Smolinski. It was really cool for them to bring him onto the project because I’ve been working with him for years and we filmed the Thrasher part together. We’re buds and it’s nice to have that vibe.

I think that goes unnoticed—the importance of the relationship between the filmer and the skater, especially as a woman working with a man. They’re close to you; they’re documenting you; you’re pushing yourself. There’s a lot of trust needed there.
Yeah, I think that’s a blind spot for a lot of men filmers. They really don’t understand. I’ve had many ups and downs filming with guys over the period of my life. I’m so glad Tyler was on the project. But we need women filmers. I want to work with women for the rest of my life.

What are things men need to know when they’re filming women?
Self-awareness is key. It would be nice to have more real allies in the community and the industry. Most of the time people are not. They say they are, but I question, Are you though? Or are you just saying the term ally right now. Whereas, like my friend Sam McGuire—he’s the best. Last year when I was working on my Bruin part, I was having a struggle with mental health and also having a PMS moment, which never helps, at least in my experience. I was explaining this and some guys don’t want to hear about it, like, periods, PMS, basic female anatomy. But I’m, like, “This is what’s happening.” Sam went home and Googled everything about PMS and everything about periods and he was really compassionate about the fact that people who have periods go through this on a monthly basis. It was so rad to have someone in my corner like that! If there’s hope, it’s in Sam.

Wow, what an angel! A lot of guys don’t understand a real ally listens, does research. They don’t put it all on women or get defensive.
For sure. 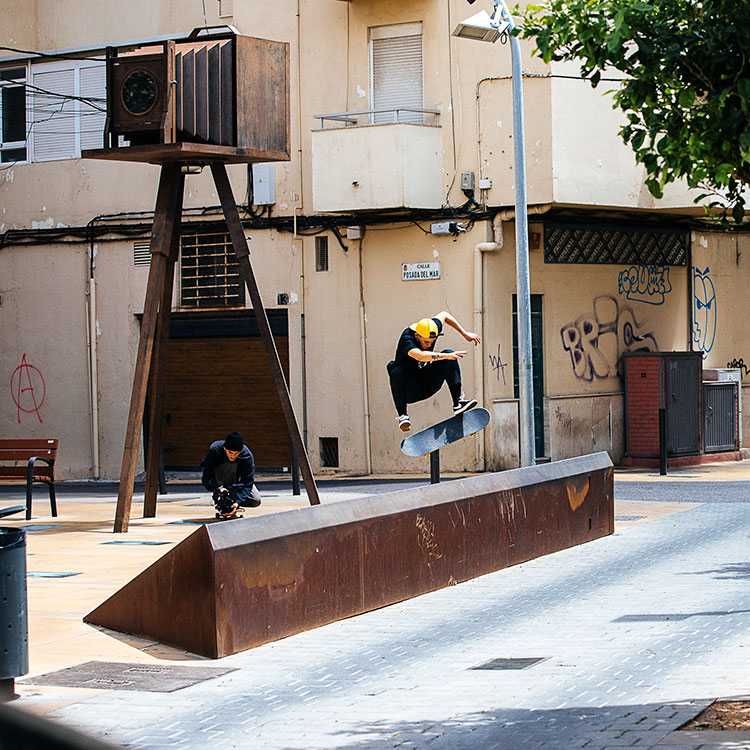 Knowing you personally, I know you’re goal oriented. Were there any tricks that you got that you’re really proud of for this part?
It’s kind of a blur looking back on it because I filmed a bunch of stuff. Leading up to it, I was really trying to learn new tricks so I could film stuff—different than what I did in the My World part. I wanted to try and do a variety of new stuff. I’ve been practicing a lot of switch manuals and back tail slides. I’m trying to keep it fun. I didn’t want to break myself off, though, either.

Is that related to the contest side at all? You being an Olympian and all that, does that play into your street skating, knowing you have to balance street and contest skating, listening to your body to make sure you’re good for the next event?
That’s absolutely an aspect of it. I want to be able to skate and compete, especially in the coming two seasons as all the Street League contests are points earning. But my biggest motivation in avoiding injury is my mental health. Not being able to move or have skateboarding as an outlet is a huge challenge for me mentally.

Totally feel you. Skateboarding is therapy.
Yeah! I got injured and I was slowly falling into this depression, and now I’m climbing out of it. Yay! 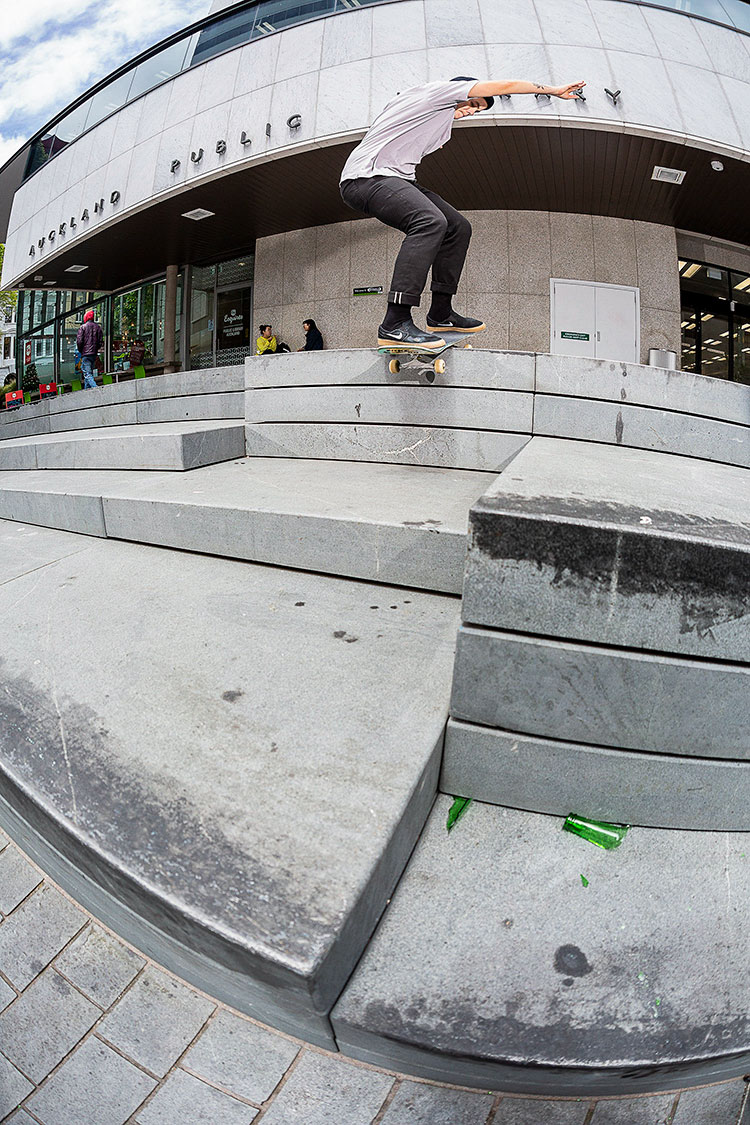 So this is your fourth or fifth full-length part. What’s it like knowing what you know and having your unique way of approaching spots, but also being out there with the Nike women’s team?
For me, the way I go at it is always more technical tricks and more planning. I don’t just show up to the spot and try something. I’ve never ever skated like that. For instance, I want to skate a ledge because there’s a certain trick I want to do. It might take four hours, but I know that I need a perfect ledge. I need spots to be specific. But it’s rad to go out with someone like Elissa that’s more spontaneous. I aspire to be more like that. Also, Hayley is just great, as a person. I had so much fun getting to know her, like, watching her progress. She’s such a rad shredder.

So how much Blink and Lady Gaga did you make everyone listen to in the van?
Ha! Actually, it was more like a lot of us with our headphones on, kind of checked out. I was trying to keep it with a good variety that everyone would be down for. I didn’t torture people too much with the Gaga, even though it wouldn’t be torture because she’s the bomb.

What impact do you hope this film has for women/trans/queer skaters around the world?
I just want to further the reach for our community and create space in skateboarding for people like me, where there wasn’t any before. I want to keep pushing that. 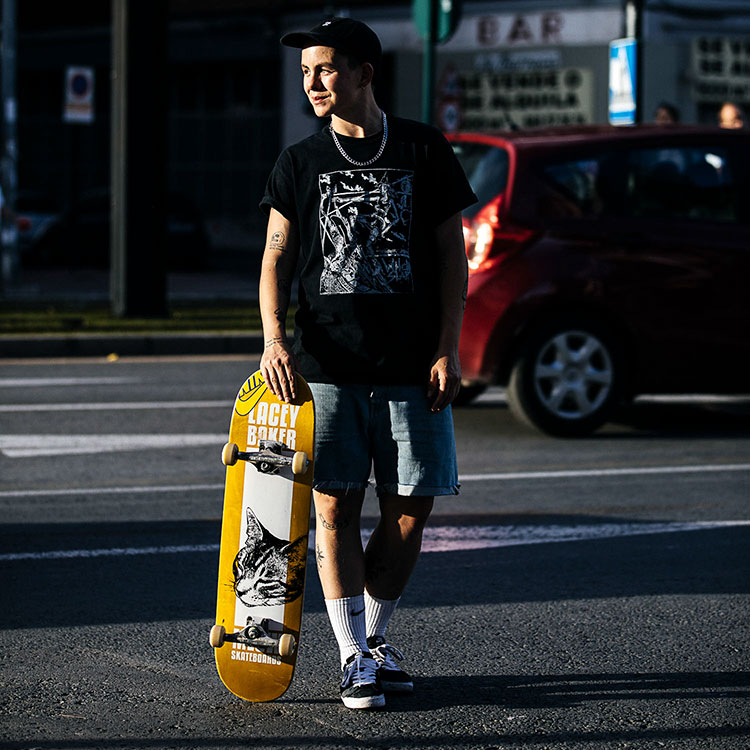 Do you feel like this video is a model of success for our broader community of non-cis male skaters? There’s differing opinions on this, as some say we should be incorporated with the dudes.
I think it’s awesome to see something that’s celebrating women and queer skateboarding only, instead of seeing something that just like one girl in a group of guys. From an industry perspective, it’s awesome to see companies support women specifically, send them on trips and all that. And also, a measure of success for me when I think about skateboarding is actually reaching the community on the ground level, like Wheels of Fortune or Queer and Trans Skate Camp, as that is some of the most powerful work that can be done.

For sure, there are definitely people that will say, “Well, it’s just a women’s video so the whole community won’t watch it because they see it just as a women’s thing.” But my response is always that I don’t care if a dude doesn’t watch it. This is for our community and our communities care.
I definitely like that we have our own scene. It feels safe. 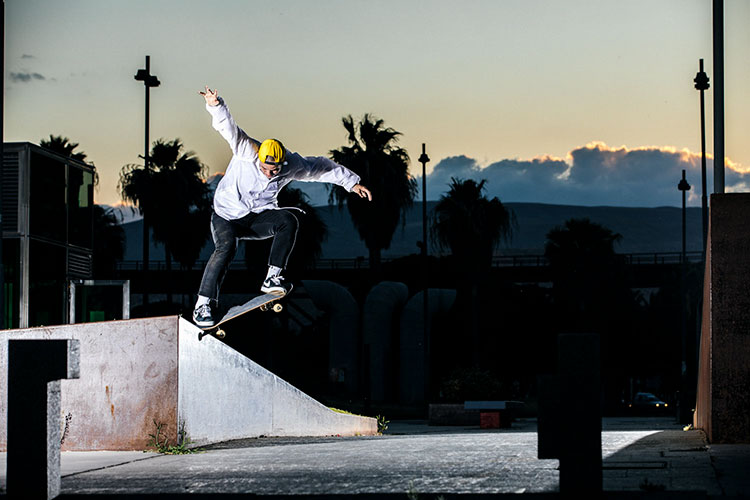 Lacey Baker is hard to capture in photos, so technical is her approach to the streets. Uphill crooks and wait for the video!

So what else is coming up for you other than a ton of contests?
Well, just getting strong and honestly there’s just going to be a lot of competitions. There’s just such an emphasis on the Olympics. It’s not even that I care so much about the Olympics. I do care about it as a visibly gender non-conforming person. Being on that global visible level, it’s important to really go for it for the greater good of queer visibility. That’s my value in going for it. I’m going to be trying to stay strong and healthy and really maintain my mental health. Contests are really the bane of my existence. I think it will be fine over all. I just need to take it one day at a time and enjoy it for what it is. So yeah, that’s my horizon.

I want to send you a relaxation candle. Any final thoughts?
That’s pretty much it. See you at Wheels of Fortune. It’s the wind beneath my wings.