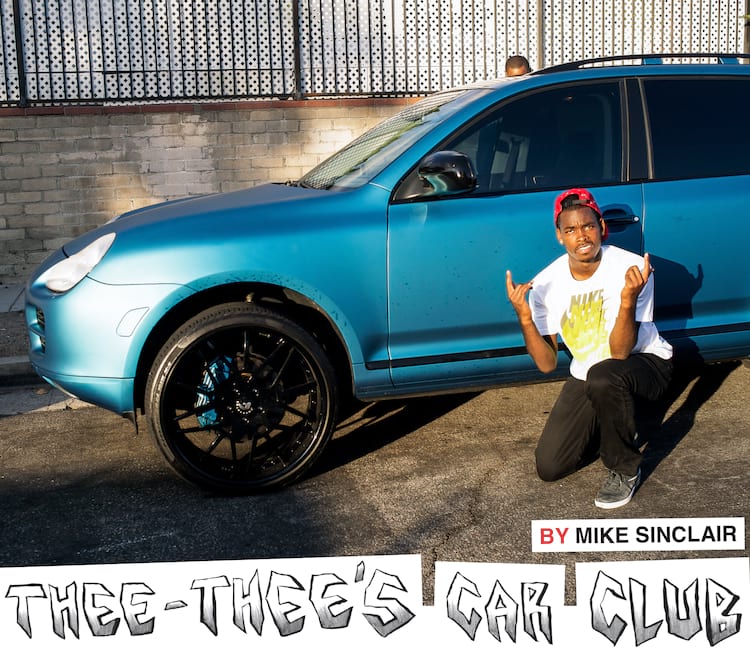 What’s up, Theotis? What’s going on?

Just skating. I’m on deadline for Baker 4. Andrew is on some Jamie Thomas-type of vibe right now. He being strict right now! That’s his mindset, but not like, Go kill yourself, though.

Yeah, I know the deadlines will bring out the Jamie Thomas in anybody.

Cool so far, I just need a little jumping and a few more things but I had that toe surgery that set me back a little. My doctor had to shave the bone, crack it open and put a screw in there. Then I got better, felt something rubbing and I had to get the screw taken out.

Yeah, but we good now.

That’s good news Theotis, I want to switch gears and not really talk about the video but I wanted to get the scoop on all of the cars you have had and get the story behind each one.

Who used to take you around to all the spots? What was the first car you remember rolling out in to go skating before you could drive?

My homie Rogelio Paz—he just skates for fun. He had a silver Honda Prelude. The reason he used to pick me up is that he used to come get me and we would go see girls. So that was my dude. He would just drop me off at a girl’s house and wait outside until I was done doing my thang and I was ready to leave.

Yeah, he would just wait on your boy.

Why would he do that?

I don’t know. He was just down.

Nah, not at all, then we would just roll back to the crib until we went to the next girl’s house.

What do you think he was doing in the Prelude while you were in there handling business?

You ain’t never invite him in to get some too?

If the girls would of been down like that I would have asked him to come on in and have at it after I was done with it. I feel bad. I never got the homie some pussy.

Nah, he came through out of the kindness of his heart but I never came through for my dog. I never even thought of that either ’til now.

You know what this reminds me of?

How you always said you going get me a big-ass case of Mtn. Dew but ain’t never came through. You know I love Mtn. Dew, man.

Goddamn, I got some shit in my garage you can just pull up. I got you, Mike. Real Shit. You serious, ain’t you? 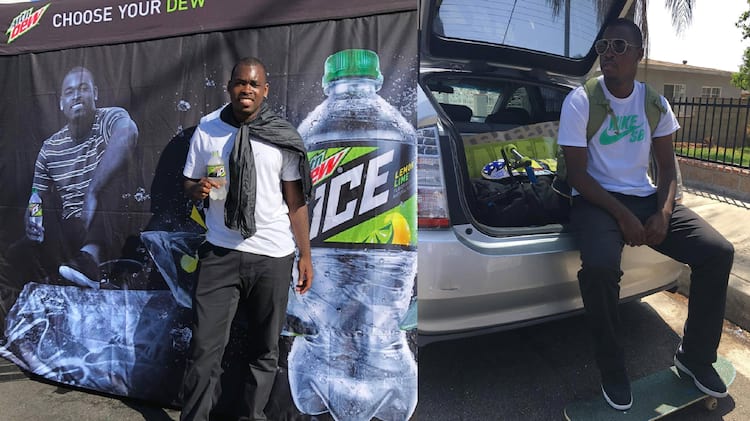 Hell yeah I’m serious. Me and Burndog going to pull up soon and scoop the fuck out of some Dew.

Dude, I got plenty and about to get more. Just let me know when you want to stop but I got stacks just sitting. I go to the grocery store and just get everything but soda.

I’m off the soda right now but when I get back on it I’m stopping by for sure.

Nah, real talk, holler at me when you back right. 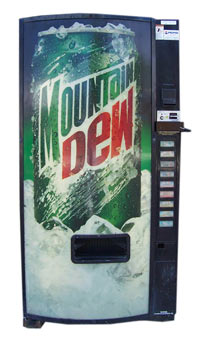 Might have to get a full stand-up vending machine from you too.

Oh yeah, I had one outside but a thunderstorm had come through and it got rained on and now it is just sitting out there. For like three months it’s been outside and it was steaming when I opened it up. I don’t know what’s wrong with it but it’s out of commission. I unplugged it and slid it over and lied it down in the grass. It’s out of order, Mike.

You ever think about getting a new one from the Dew, putting it outside and charging 1985 prices for some soda? Like 25 cents for anyone who stops by or just to get the neighborhood a good deal on soda?

Shit, I wish I did. I would have been able to buy a new house off of that. If you thirsty don’t go in my fridge, take yo’ ass to the backyard and I hope you coming with some quarters.

It’s hot back there on your street course

We got options—Code Red, Regular Dew, LiveWire, we got it all.

Hell yeah, that was the good stuff. I don’t know if you can still get that but I got it.

What was the blue shit that looks like Windex?

Oh, man, that’s Baja Blast. It do look like Windex don’t it.

Yeah, we got to get back to the cars again, Theo.

So your boy with the silver Prelude that never got none was the first car you remember rolling around in but it wasn’t yours.

Yeah, it was just like my personal free Uber really.

With all the good memories in the Prelude you didn’t want to just get a Prelude when you started looking for your first car?

Nah, I can’t have that. That motherfucker is a stick shift so that’s out the question. 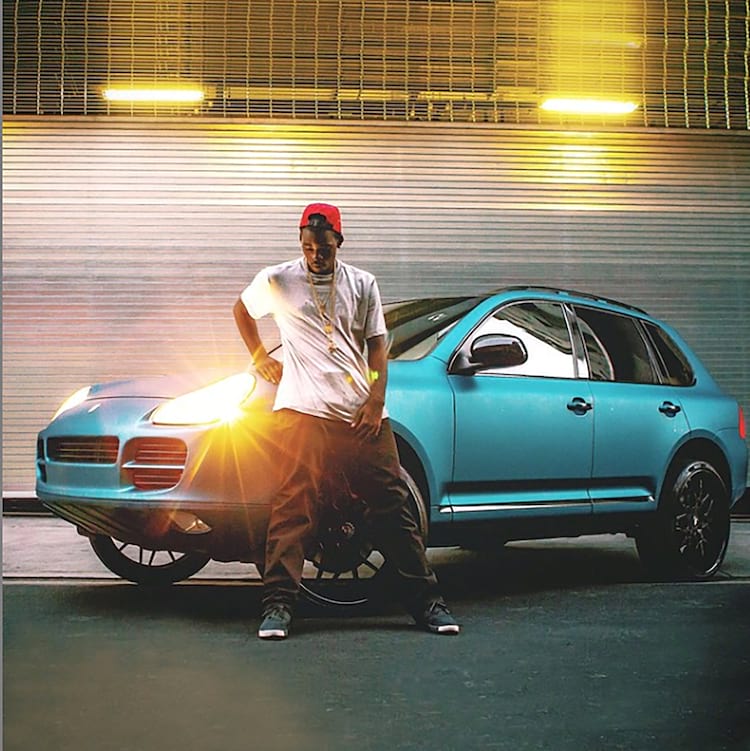 So what did you end up getting for your first ride?

My first ride was a Grey Porsche Cayenne SUV and I bought that before I even knew how to drive. I used to go outside and stare at the motherfucker, then I would get inside of it and play music. I did that for about six months.

I heard you did stuff to the Porsche before it ever left the garage.

Yeah, I got it wrapped teal blue and I put some Savini rims on it before it ever left the driveway. When I got it the way I wanted it, I still hadn’t got my license and my sister asked me to go get the family some food. I went to Popeye’s on my first trip all hesitant and I pull in the drive-thru and I scraped the whole right rim—so disappointed right there. I wanted to just come home without the food but then they would be pissed. I was depressed for real on hitting that curb. It’s about the whip; fuck the food. My whole mood was fucked up on that first trip out the driveway.

I did the same shit in my Cadillac. I pulled into PHX Am and hit the rim. It fucked my mood up for the weekend.

Yeah, when you scrape yo’ rim that shit really hurts.

I got my license after the Popeye’s run and people started DMing me saying shit like, I seen you today on the 110. I see you on the 405 right now. I was like, Ah, shit. I gotta pull the wrap off, man. Too many people know it’s me. I had to go back to the original grey color I bought and nobody knew it was me no more. I can’t have the only crazy-ass-color Porsche in the ’hood. 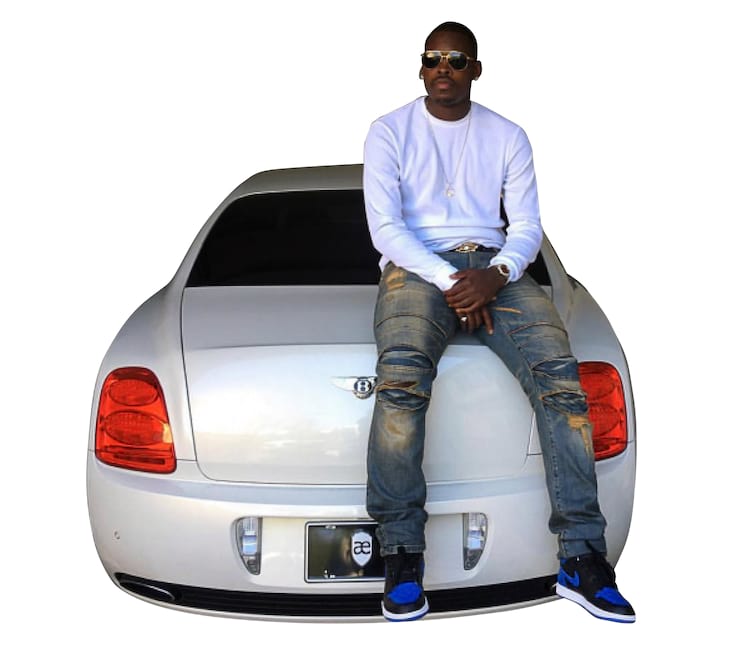 So what happened to the Porsche?

I rode in that for awhile. I ended up trading it in. I put ten grand down towards a black two-door Bentley Continental. It was a 2008 model and I had it wrapped matte black. I rode in that for awhile and for some reason I missed that gloss. I really wanted a red one, since that black was so dull, so I traded it in for a 2007 red Bentley Continental two door in St. James red. I was on a thirst car mission just because of the color. I kept the red one for about two years and then I really wanted a four-door Bentley so I got a white four-door Bentley Flying Spur model. That was also a 2008 model and it really fucked up my mood. It was a lemon. A fucking lemon Bentley, a hood, hooptie car. They played the shit out of me. The suspension was all fucked up and it was leaning on me. I took it in to see what they could do for me and they said $5,000 to fix the suspension. I said, Give me back the keys. I’m out. I ain’t paying the five.

Did you sell it back to the dealer or trade that one in? 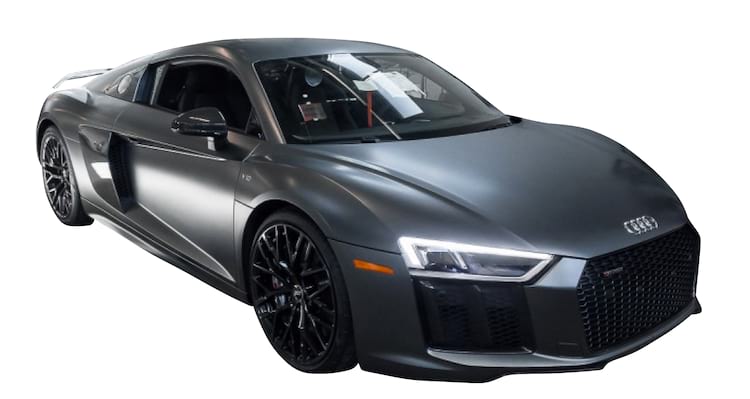 Oh those are nice.

Yeah, that’s what we in now. A grey one.

I hear you. So is that all of your cars so far?

Yeah, but I got a skate whip, too.

What you driving out on the sessions?

I got a 2012 Ford Fusion burgundy red. You can do whatever you want in there but you can’t eat or nothing in the Audi. We gotta keep it right.

Yeah, keep it nice so when you are over that you can still catch a good trade in.

So tell me a little about Baker 4.

Man, it’s going to be amazing. Dudes been really killing it and Drew is working on it every day. Kader is on fire; he’s murdering the game. Rowan is coming pretty clutch, Figgy’s part is nuts, Spanky got a lot of footage and T-Funk always comes through.

Yeah, Jacopo Carozzi is on now.

Yeah, he’s our secret weapon for the video.

Yeah, Nov 21st is the premiere.

Sounds good. Scoop me up in the R8.

I will. You with me, Mike. The homies can take the Fusion if they want.

Thanks, Theotis. Love you, man.

Love you too, Mike.

Theotis fucks up another ledge while the homie chills in the Prelude     Sequence: Adams
© 1981–2022 High Speed Productions, Inc.