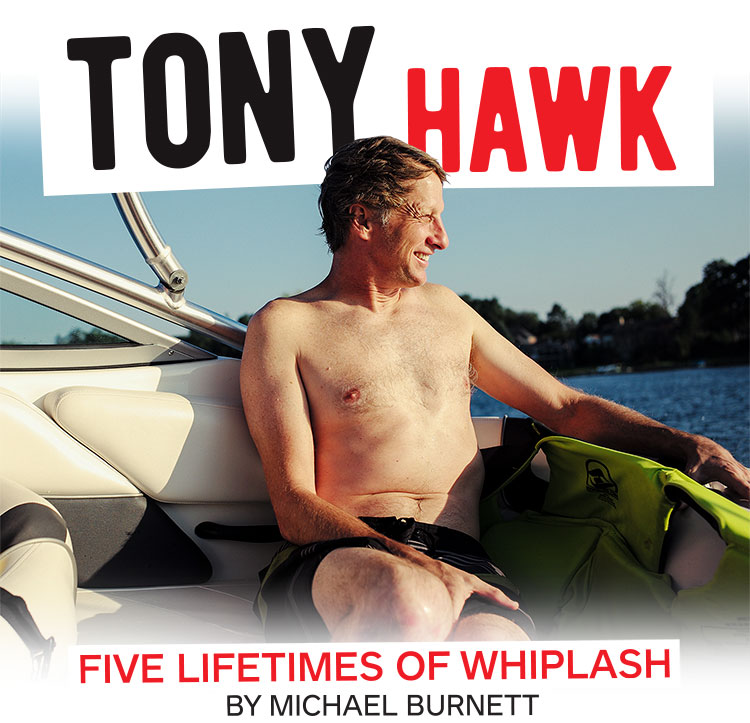 He ollied into airs when everyone knuckle dragged. He sported a pony tail and listened to Nitzer Ebb while his peers were in the pit. He invented the kickflip 540 when everyone said that vert was dead. So why is Tony Hawk putting out a full-length skate video in the age of Instagram heroes? The same reason he did all those other things—because he wants to.

Everyone knows that skateboard companies aren’t really a way to make a lot of money. What’s your main reason to keep doing Birdhouse and big videos?
Well, Birdhouse was the first company I started and it is my passion. So, I want to do anything I can to keep it going. I feel like this team has given so much of themselves to Birdhouse with relatively no compensation; some, but not nearly what I think they deserve. So, I want to provide something to them to give them that recognition and that opportunity. A few years ago we were in Europe on tour and every place we went, there was this magic in the air and I felt, like, there’s something more to this than just demos and skateparks. This is something I need to capture on a bigger scale, and that was when I decided to do the video.

You’re a media guy. You’ve always been an early adopter of all kinds of technology. So, why a full-length video in 2017?
Because I think it’s a lost art form. Especially with this team, we have such cohesion. We all travel together, and this is honestly like my second family. I know them all really well; we really enjoy hanging out; we enjoy skating together. I wanted to have something that represents that, not just having each team member have their own part—like, this guy lives here, this guy lives there, but they don’t really hang out. The only way to show that is through a team video. People talk about single video parts, like, “I just dropped my video part.” What is it a part of? It used to be a part of a whole video.

You don’t want to bail on this one, alley-oop lipslide over the channel

What’s the closest you’ve ever come to going, “You know what? I don’t need a skateboard company.” Did you almost throw in the towel when Riley quit?
No, not at all. If anything, I was excited for Riley to be recognized on a scale that was beyond nepotism. Obviously, he’s super good and deserved to be on Birdhouse for his skills. The idea that he was just living in my shadow didn’t sit well with either of us. I was just trying to keep him going until something happened, like, how Andrew Reynolds ended up recognizing him.

Anybody who’s done a board company knows it’s a big pain in the ass.
It’s a big commitment. For sure, I’ve had some years where it lost money, and considering the cost of this video, very much so right now. Yes, the video is a marketing tool, it’s a promotional thing, but at its core its my gift to these skaters, because they stood by me for so long. Yeah, I hope it brings back sales in a big way. I’d love that.

You’ve also recently turned a woman pro for a mainstream board company, which hasn’t happened in quite a while. Why do you feel like it’s a good idea to include women and vert skaters on a modern skate team?
Well, I think it’s way past due. Through the years there have always been key women skaters that have been inspiring other girls, but I feel like Lizzie has broken through the glass ceiling, if you want to call it that. Her name is recognized because of her skills, not because she’s some anomaly or novelty. Not like, “She’s pretty good for a girl.” No, she’s just good. That’s the rising narrative in terms of all skateboarding: the girls are just good; you can’t deny it. From my perspective, we’re long overdue to have a female skater on our team. I saw something in Lizzie when I first saw her skate. She’s got something special, and I’m not talking about looks. Her drive is genuine; she really does love it. She wants to skate and she approaches it with integrity and grace; she doesn’t capitalize on being cool or whatever it is. 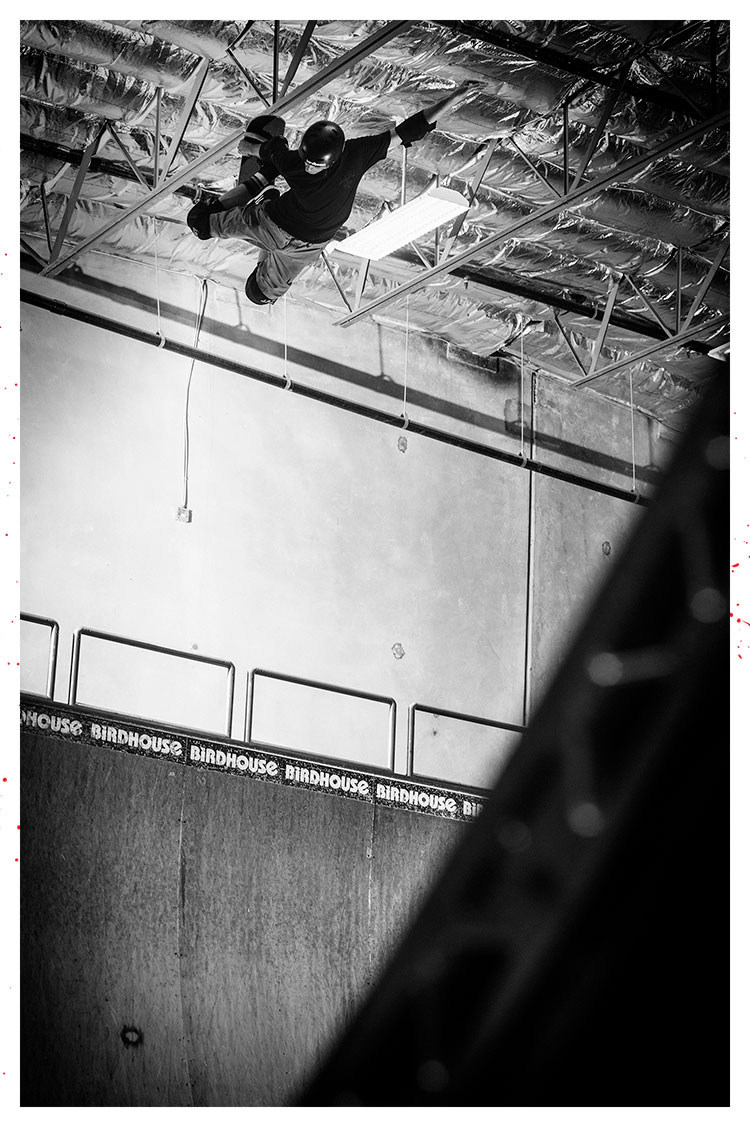 Skateboarding has always been both youth and progression-oriented. At what point did you start to think you’re just going to do your own thing and stop worrying about keeping up?
I think it was about five or six years ago when I realized that vert is my specialty and I have my own flavor of tricks. I’m not trying to fit in with the trick-of-the-month club. So I just decided that I’m going to start tinkering with this other stuff. Also, it has a lot to do with getting older. I don’t want to do the big spins anymore. I can’t take those slams. I’ve had enough whiplashes for five lifetimes. Some people think it’s cool; some people may think it’s more of a novelty. But, it’s the only way I know of to keep skating and stay progressive, and that’s what has always been my drive.

There’re more slob fastplants happening right now than ever.
Right. Yeah, exactly. So it’s, like slow and steady wins the race. Just stay in my lane, so to speak, and at some point it comes back around.

Here’s a tough one: you finally let Willy Santos go. Was it hard to let Willy and Kevin Staab go?
Yeah, that was a bummer. Willy was there from day one, and you move different directions, obviously, and Willy was a little more focused on his business at the time. I have a strong sense of loyalty, so that was really hard. At the same time, I have a great respect for the new team that we have and their opinions, how they want to focus on what Birdhouse is and what the efforts are. You also have to ask whether or not anyone is buying the boards. Willy understood. It wasn’t some great shock to him. Kevin did too. I do my best to give them other opportunities, like, if I get tapped to do a big demo somewhere, Kevin’s thrown in the roster. That’s my way to help him make some money.

What was your take on Clint Walker’s controversial appearance on King of the Road last year?
About him slashing tires?

Yeah, getting in fights and stuff.
I feel like that was exaggerated. And also, the editing is supposed to be sensational. So, I understand how that works. He’s just opinionated. I know Clint. He just has strong opinions, but he’s also very driven. If you look at his background and how he came out of that to be a pro skater, that’s impressive on its own, to me. But I know Clint; he delivers. He has his goals. He’s one of the most vocal supporters and also the voice of reason for this video. He lives in the reality of what is this video going to be, how much do we really have done. Everyone else is kind of in this bubble, like, “It’s great; it’s awesome; it’s gonna be cool!” And he’s, like, “We really need to focus on this.”

Because you’re so high profile, you’ve been subject to rumors, weird news stories and mainstream gossip. Does  that stuff even resonate with you anymore or does it just roll off of your back at this point?
I learned to tune it out early on, from being an outcast skater. My style was made fun of for so long, even in Thrasher. Like, “He’s got this weird style. He ollies into his airs. He’s cheating,” and all this stuff. It hurt then, but I learned to let that give me motivation. Not necessarily to prove them wrong, but to improve myself. When you’re subject to those kind of falsities and half-truths, and what people like to pick up on, you realize people are going to believe what they want to believe. And if they hear someone tell a story, and it is somehow consistent with their types of beliefs, it’s, like, “That’s true.” When you’re the subject of that, and you know it’s completely untrue, you have to accept that that is what they want to believe. Whatever it takes for them to believe they’re gonna do it. I mean, look at our presidency: people believe what they want to. Either side, I’m not just talking about Republican or Democrat, all of them. They all just live in their bubble of news, and that’s their truth. It’s just more apparent now. When you’re the subject of it, you just have to tune it out and hunker down, especially in recent years. I got back to what’s important to me, and that’s skating. 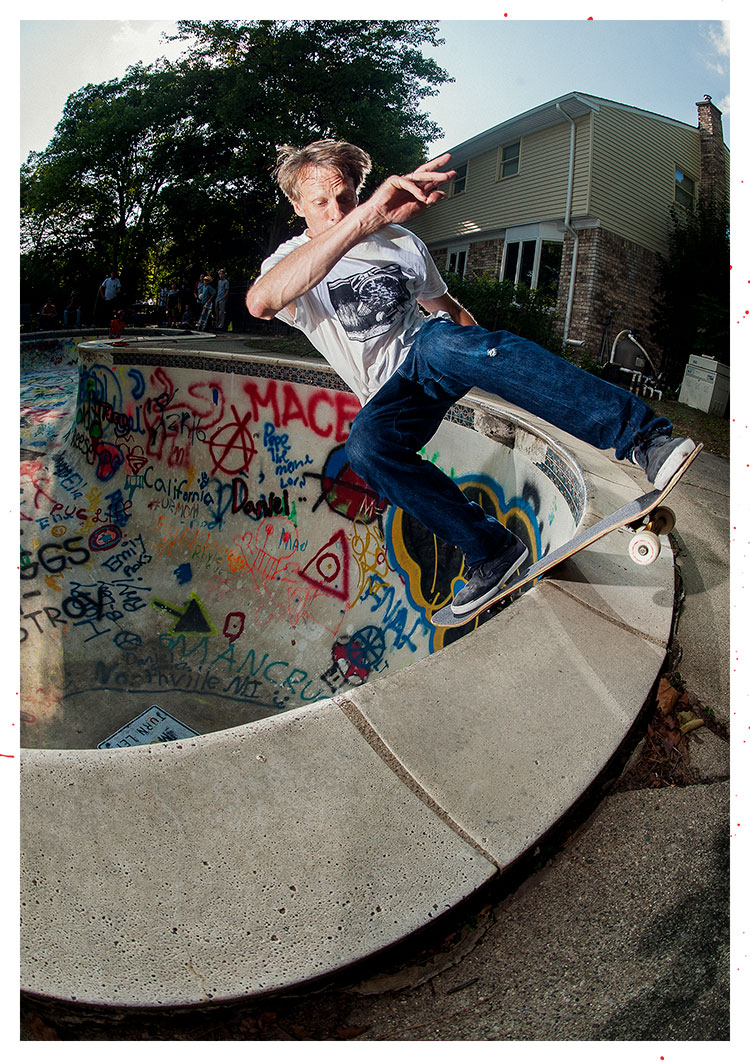 Frontside decker, back to the future Photo: Muller

What’s your benchmark trick? Where you go, “If I lose this trick, I’ll know I’m on a decline.”
That’s a really good question. I feel like I take backside Smiths for granted so much, that if I couldn’t do a long, solid one, I’d be, like, “What is going on?” For me, that trick is easy. The ones that are a little bit harder would be any variation of a 540 spin. If I get to a point where I’m even scared to try one, then that’s when I know that I’m in decline.

That seems like the one that people really have to psych themselves up to learn. You’ve seen people have it for small windows of time, like Cab, Chris Miller and Tony Mag. You think you’ve got ’em for awhile?
I think I’ve got ‘em for a few more years. On smaller ramps, it’s become harder. Partly because I’m getting older, but also because I skate larger ramps so much that I take the air-time and transition for granted. When we used to skate shitty skateparks, everything was terrible, so you could learn something and pretty much do it anywhere. Now, the ramps I skate are perfect and if I go to a skatepark with some wonky transition that’s only nine feet tall, a 540 is a tall order.

Is there anything else about the video that we should talk about?
It’s been a really fun process. It’s been fun to see everyone get motivated. It’s been fun to see Lizzie come into her own through the filming of this and through her Thrasher part. I’m just really thankful that these guys stepped up to the challenge. This is a big group of skaters to think that they’re all going to perform. When you do videos like this, usually there are two or three guys that still need another year.

It’s the right time. You can tell with these guys even on King of the Road, they have exactly what it takes. If you get ‘em too early, it won’t work; if you get ‘em too late, it definitely won’t work. Gotta get that sweet spot.
That’s what it is. We’ve got the team to such a sweet spot now.

Get Saturdays from the iTunes store here.