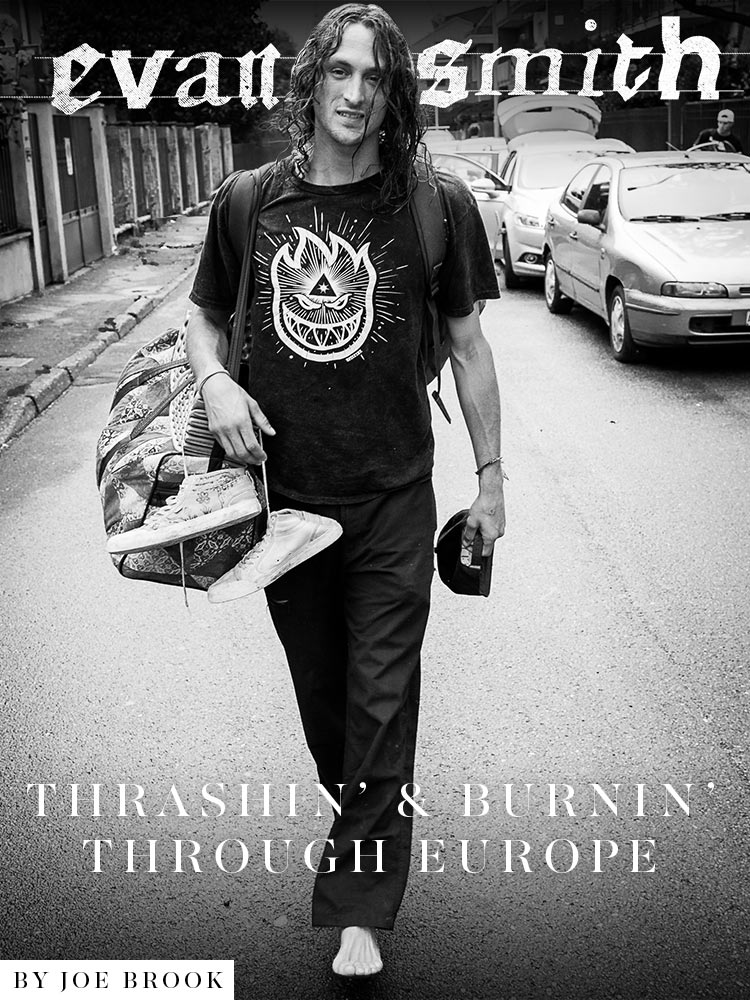 So this was your very first Spitfire trip?
Yeah, dude. Crazy, right? Fuckin’ nuts. I met up with the most insane crew ever. I’d been cruising around in Giza for a couple days by myself. Somewhere in my travels I jumped over to Milan and met up with the most legendary crew of all time.

Heavy.
It was crazy, yeah. So I’m right at the beginning of my first Spitfire trip—you know the lineup—and it’s crazy because those dudes are some of my friends. I’m really comfortable hanging out with them, so we all just really partied.

How was it skating with so many guys on the trip?
Dude, it wasn’t weird at all. It was awesome because anything that we went to was gonna get shredded apart—no matter what. We had dudes that knew how to skate every different facet of skateboarding. So you go to a rail and Raven’s gonna jump on that bitch backside and ride it to the bottom. Zion was killing it to on the rails. Then you look over your back and you see Grant flying in the air and he’s landing right next to Daan who just nollie heeled with no grab. It’s, like, "What is going on right now?" Next thing you know, Raney’s flying off of something fuckin’ power bombing. It was insane!

How is it at that first spot in Milan? You just went off and did all of those tricks over the rail into the bank? You kinda set the pace for the trip: full attack mode.
Dude, that was the spot, man. I’d never seen anything like it. That’s one cool part about it: not only did we have an epic crew that was really inspiring and motivates your creativity, but you show up at these places that are pure art pieces that we get to skate on. And with the no-rules type of mentality of Thrash N Burn, we could just do whatever we wanted and charge. With that in mind, the places we were going to brought out the fundamentals of who we are. I see that in some of those plazas and stuff. It was like pure canvas. Some of those spots are just, like—there’s nothing like it. That marble, it’s super hard, super made for skating and made for us. You add life celebration with that and the combination is just unstoppable. 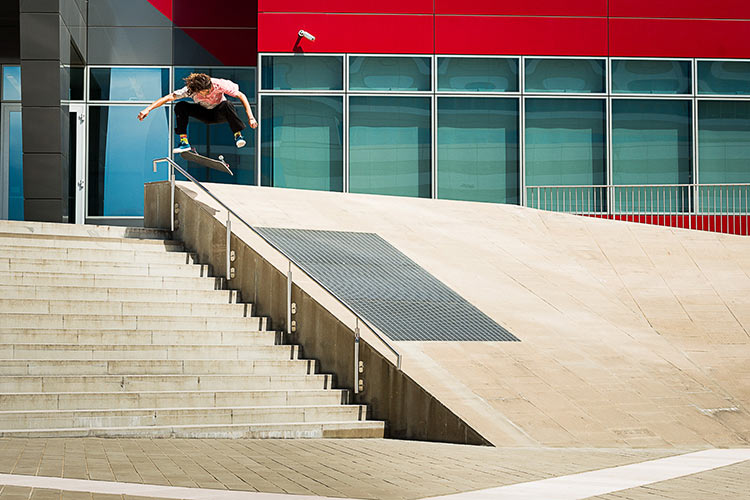 Switch varial heel into the bank during one of many life celebrations. Grate work, Evan

Who was your roommate? Who did you hang out with more on the trip than anyone?
I think everyone was pretty much together. Well, the first couple days we had the four-car separation, you know?

Yeah, we had four rental cars because the vans got jacked up.
Yeah, so that started off a little weird, ‘cause I think everyone wanted to be together. But by the time we got to Zurich, we got vans and then the synergy was back; we were in full skate mode. But I was just so stoked to hang out with anyone. One thing that was really cool is that it was my first trip with Louie and we’ve known each other since we were really young.

And it was both of your guys' first Spitfire trips, right?
Yeah. It was so cool. We were both just losing our minds watching it all happen. It’s so surreal.

That’s cool. it’s an honor to skate for Spitfire.
Oh, dude, it is such an honor to skate for Spitfire, you know, with the history of skateboarding. I had a Spitfire sticker on my binder in school. It is a fundamental part of skateboard history and it’s a true honor to be on a trip with them through Europe. It was insane. I cannot believe that Louie got the opportunity to do that as well. Knowing where we come from, it’s really cool, man.

Does Thrash N Burn live up to its name?
Oh my God. They need to name it something a little gnarlier. Shit got thrashed and disintegrated. Keep the Thrash in there just so you guys can market something, but it was disintegration. You saw it.

What was one of your favorite moment from the trip?
Definitely one of my favorite moments was when we were on top of those containers and everyone was gathered in that little row and Grant’s holding a fuckin’ crate above his head yelling at the top of his lungs to get Raven to jump on that rail. Raven was, like, “Fuck, man, I don’t know if I got it.” Their relationship gave me a whole new perspective on getting hyped up by your friends. At one point, Raven stopped and just looked at Grant and Grant looked at him and he’s, like, “You better get on the rail right now! Take it to the fuckin’ bottom!” And Raven got fired up and jumped on it and rode it all the way to the bottom. That energy kept going; there was a whole connected thing. And we took it to the ramp and Grant was about to land his first frontside invert of all time and we’re up on the deck of this fast-ass metal ramp. And same thing, he’s, like, “I don’t know; I don’t know if I got it.” We could see his feet were in the right position. He just had to throw it down and put his body aside and either fuckin’ make it or die. But that’s more progressive than where he was at, because he was just tossing them. So we all fuckin’ got him, "You better fucking do it. Throw that thing down right there, right now and just make it and you’ll be so happy. If not, you’re gonna slam and be fuckin’ happy." That’s kind of the mentality and the lesson that I learned from being around a crew of animals.

How was it having Phelper on the trip? Was it intimidating? For instance, you jumped on that kinked rail, you boardslid it. But before you were, like, “I don’t really boardslide rails,” but I think you just jumped on it to kind of hype everyone up. Then Phelper was yelling, "Put it down!" And I was thinking in my head, “I don’t even know if Evan wants to jump on this thing.” But then you kind of had to do it, right?
Dude, it wasn’t even that. I could have walked away from that thing. I’m not scared of Phelps. He wouldn’t have thought of me as a different person from one skate session. He’s a fuckin’ genuine human and he’s got real soul and real passion for the development of skateboarding and what he’s been working towards. And there’s nothing intimidating about that, for me, just because of the fact that I’m obsessed with the progression of it as well. And me and him, we align with our vision when it comes to that. So I think it was time for us to kind of unite and have that spark. Just being around and having the opportunity to pick his ear, hear some of the stories of some of the things that I grew up listening to and hearing through the industry and seeing what’s true and what’s not true. ‘Cause he’s got a lot of amazing info in him. And on the trip he was awesome, dude! He brought the hype! It was so fuckin’ cool having him on the session. But yeah, the kinked-rail situation was a little bit beyond me. I don’t really fuck with rails like that. But like I said, we were just getting each other super hyped and we were together. So at that point, I learned the lesson as well too. I had to put my body aside if I want something and had to use my mind to get it. I mean, obviously muscle memory plays into it. I’ve done a lot of boardslides, so I was, like, "Maybe it’s possible." But then when I started trying it I thought maybe it wasn't possible. Then next thing you know, I was the magician we were just talking about—all of a sudden I find myself at the end of the rail just looking down, like, "If you want it, it’s right there." That progression in my heart and in my soul—my passion—it’s always been there, but these opportunities allow it to grow. It’s freedom. Thrash N Burn, it’s full freedom for whatever. You don’t want to skate? Don’t. But you better bring the fuckin’ hype! 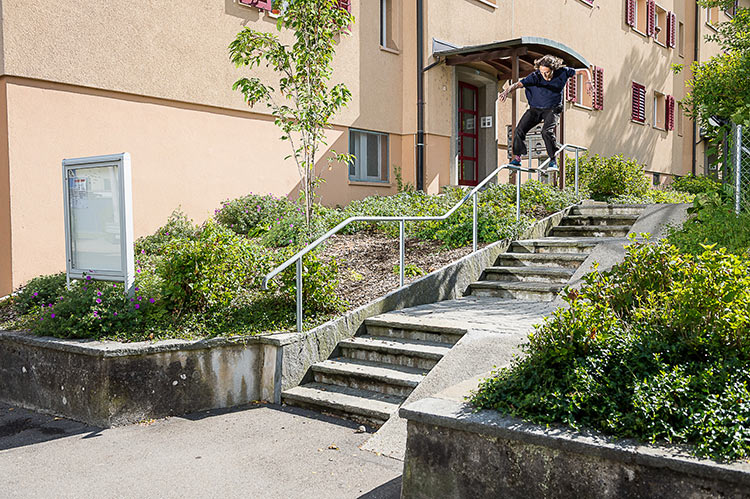 Evan Smith, astral warrior. After he made this boardslide, he told Phelps, “I like this shit”

You weren’t there the whole trip, but what was your favorite city that we went to?
I hadn’t been to Zurich and that place is amazing for skating. There are so many spots; you can literally just skate around. You don’t need a van or anything. You just hop around the city and it’s European architecture at its finest. So that was a really cool experience. And of course, me being Italian, I’ve always wanted to go to Italy, and we got the opportunity to stop at Milan as the first stop. Got to see my roots seeping through the Italian marble.

It was an insane trip. I don’t think we’ll ever forget it.
Exactly. That’s one of those things that I’ll never forget: the Thrash N Burn 2017 Europe tour with the most fucked up crew. It’s just crazy.

Are you in for Thrash N Burn 2018? You ready?
If I’m allowed to go, I’m fucking ready. I would be so honored to have another opportunity to do this, and I would hope that it would be a similar crew, ‘cause that vibe is once in a lifetime.
© 1981–2022 High Speed Productions, Inc.