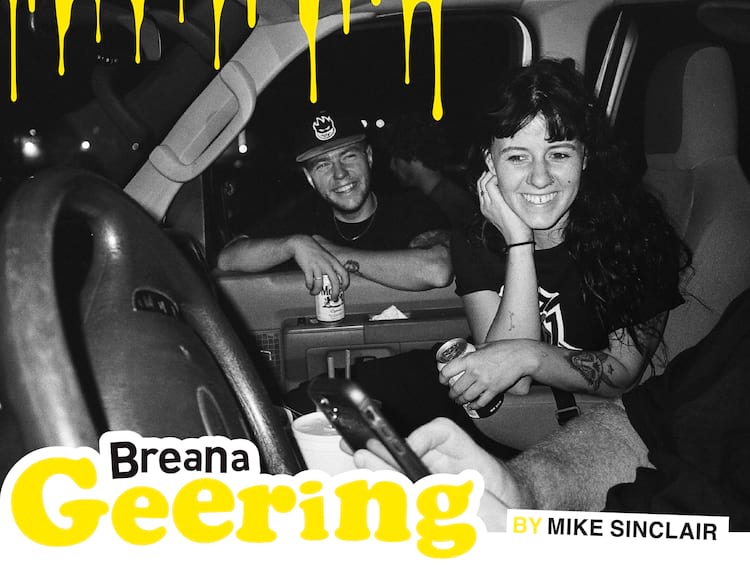 We only had one female skater on the Scramble list this year—Vancouver’s Breana Geering. Girl skateboard’s newest rider is punk rock, hella chatty, laughs A LOT and cleaned out the whole crew repeatedly at dice. For the last few years, the Canadian sensation has been out in the cold streets steady killing it. From her breakout Wisteria part to popping up in projects with Vans and the Skate Witches, she's made a name for herself travelin' and manualin'. All that effort's starting to pay off too, earning her a spot on a tight top-ten list and a seat in the Scramble van. We were short on Breezy-style spots this trip, but she always made the best of it—pushing, slamming and laughing all the way.

Oh, I’m such a hillbilly I thought you were watching drag racing. I was about to get hyped.
Oh Goddammit, no. 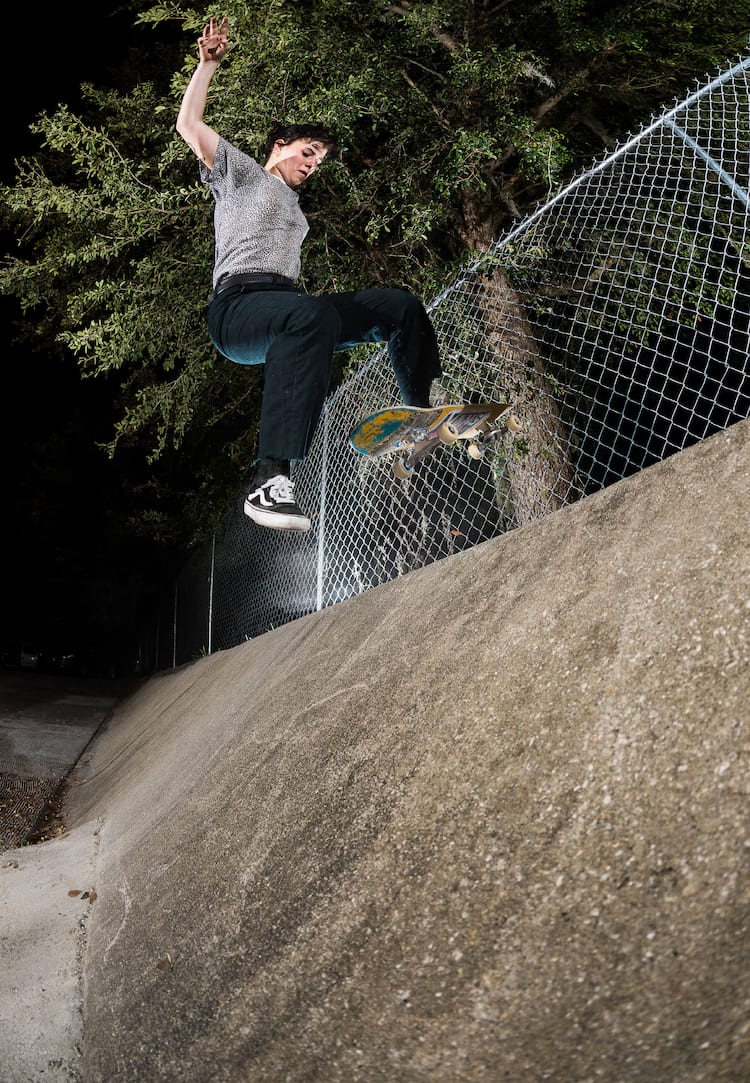 No comply to noseblunt, then straight to a shotgun with the boys

My bad. How have you been since the Scramble?
I’ve been good. How about you?

Everything is good with me. Did you celebrate Thanksgiving in Canada?
Yeah, we did. It’s in October here.

Oh shit, I’m an idiot, Breana. But hey, no turkey for you.
No, I don’t eat turkey but I get a Tofurky and it’s pretty good.

I’ve heard good things but I’m gonna pass on the Tofurky.
I don’t think it would be your thing, Mike, but for the normal, average person, they like it.

Damn, well, that makes sense. The people need to know where you are from and when you started skating.
I’m from Kelowna, British Columbia, Canada and I found an old, crusty skateboard in the garage when I was younger and I started riding it around and I was like, This is fucking sick. I want to learn how to do shit on this. I just got really obsessed with it right away and that’s how it all started for me. 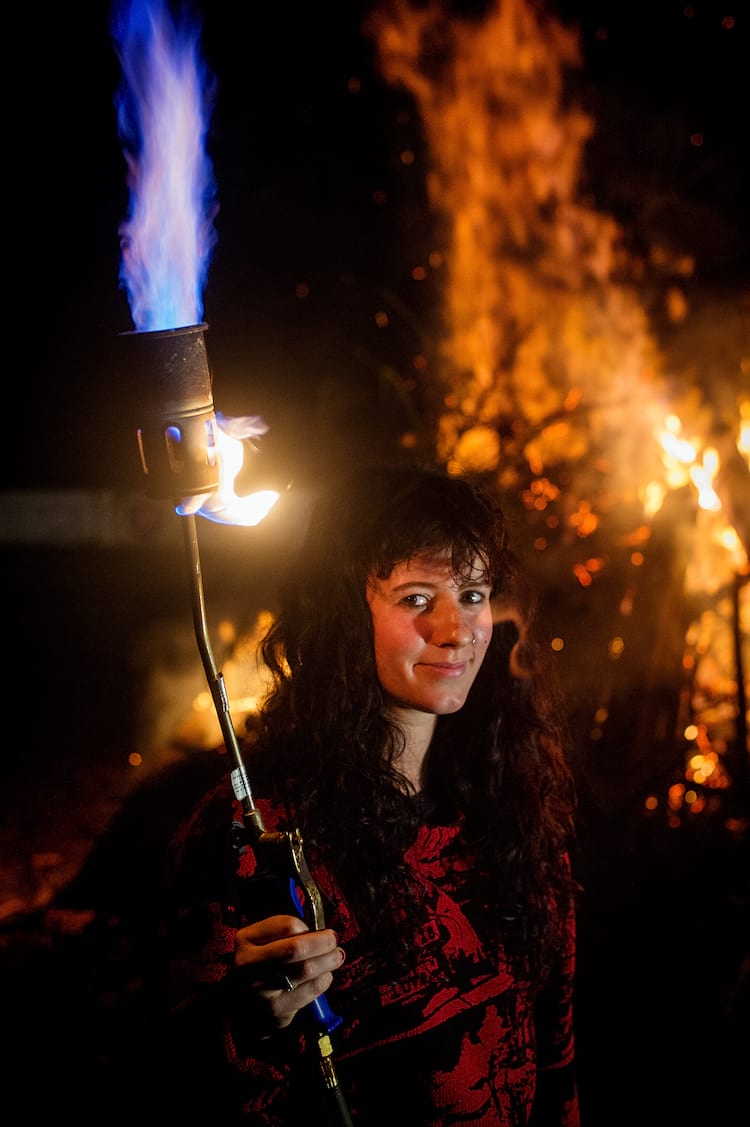 That's one way to roast a Tofurkey

Are you the only one who skates?
Yeah, I’m the only who skates in my family. It’s four girls and one boy. My Brother is 31, two of my sisters are 27, the other one is 26 and then there is me and my twin and we are 20.

Nice. What is your twin’s name?
Her name is Samara and she’s fucking funny.

Send me a photo of your twin. I want to see what you would look like as a non-skater.
You mean as a woman? You mean as a very feminine woman?

Does she back your skating or does she talk shit on it or is she too nice to talk shit to you?
She is the nicest. She would never talk shit. She tells me she is very proud of me.

Ah, that’s nice. I hope to meet her one day. I love this half so much, how could I not love your other half? When did you find the crusty, old board in the garage?
That was eight years ago when I was 12.

On the Scramble, before we had really hung out, you told me your first Thrasher magazine had an interview with me in it and you felt like you already knew what to expect.
Oh my God, yes! One year my parents were like, “What do you want for Christmas?” and I said, “How about getting me some Thrasher magazines, please?” So the first one I got was the 2011 King of the Road issue. I was like, This is so fucking sick! Then I got to the interview with you and I was like, This guy is fucked.
I don’t think he is going to be okay. He said he has never eaten a strawberry before. How is he still alive?

Here I am, still doing the same dumb shit and I feel fine, Breana. Was my diet really that shocking to you on the trip?
Not really. I knew what to expect going into the trip after reading the interview. I loved sitting in the van with you and just asking you about things you would and wouldn’t eat. You actually worry me with your diet.

I’m sorry, Breana. I’m as old as your parents. I can’t change my ways at this point. I don’t think I ever grew up. Did skateboarding keep us all young or did it keep us dumb?
You’re not dumb, you just didn’t grow up old and become a boring stick-figure person. 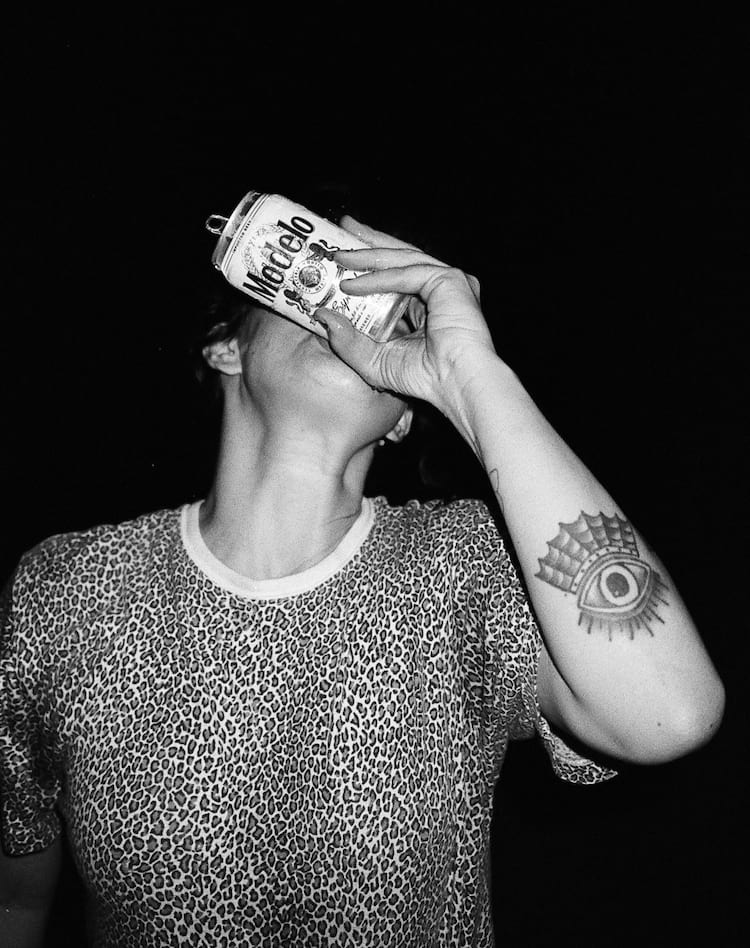 Takin' cues from King of the Road

Who was the youngest person on the Scramble this year, was it you?
Jack O’Grady is the youngest. I will be 21 soon and he just turned 20.

Wow, I wouldn’t have guessed that. His skating is so raw; he skates like a seasoned vet, not like a young kid.
Yeah, Jack is a fucking beast! It was so fun watching him skate, just going for crazy shit. That back 50-50 was ridiculous.

Yeah, that was shocking that he did it so fast and easy with security on his ass.
Yeah, Jack really killed it on this trip.

When you got invited on the Scramble, did you know anyone prior to joining the tour?
I had skated with Griffin Gass a few times since we both skate for Girl, but other than that I didn’t know anyone or what to expect.

You date a former Scrambler. Didn’t she give you any info on what goes down?
Oh yeah, I remember getting the text to go on the trip and it was early in the morning. I was shitting my pants asking myself, If this is even real? So I texted Fabiana and told her I was going and she replied, “Be ready. It’s fucking gnarly. You skate all day for ten days straight.” I told her that sounds very chill.

Do you wish the trip was longer or shorter?
I think it was the perfect amount of time. At the end I was really ready to go home but I wouldn’t want it to be any shorter.

Our last day was great, just chilling by the pool and then gambling before we took off at the airport.
Oh yeah, the last day was amazing and I fucking came up at the casino.

You looked comfortable at the roulette table.
Yeah, I won about $150 real quick. I wish I had more time there so I could have wrecked it. I snuck in since I am not yet 21, so I had Myles Willard cash me out. I also won about $20 a day in dice on the trip, too. The road was good to me.

Oh yeah, you cleaned me out a few times.
Yep, I sure did. 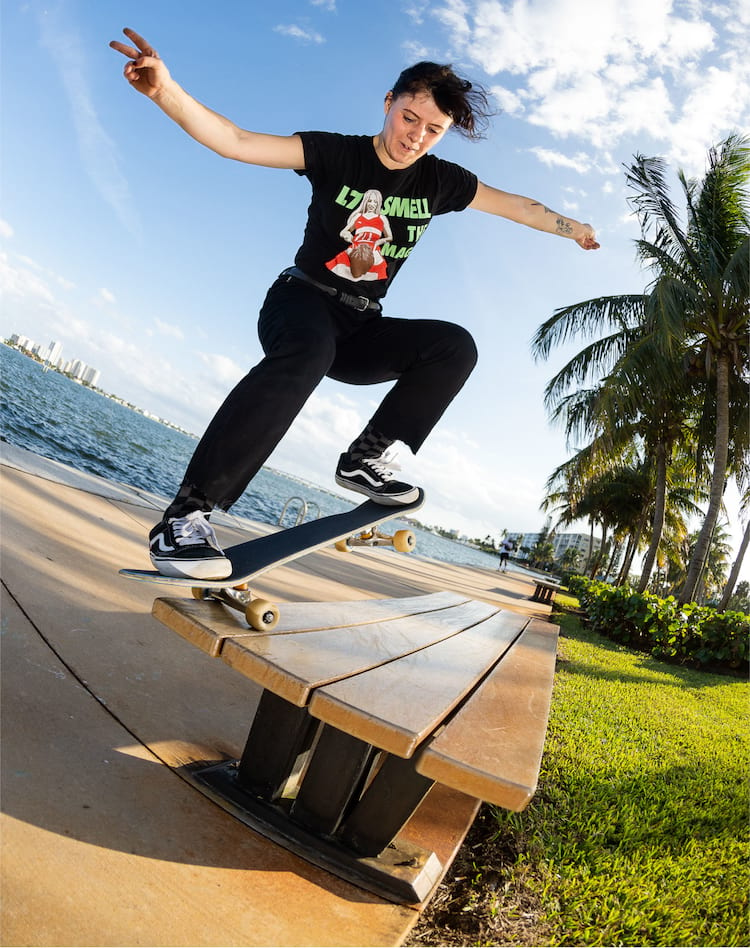 Lines on the bay. Nosegrind 180 between tricks and nobody’s board hit a manatee

How did you get noticed first? Did you come up through contests or did you always film and put out video parts?
I put out this video part from my shop when I was 16 and got hooked up, then I moved to Vancouver and shit just sort of spiraled from there.

A year ago your Wisteria video part came out and I thought that video was incredible.
Thank you, Mike. I just looked up names of flowers and picked the one that I thought sounded the coolest to name that video.

I love it! What are you working on now as a follow up to Wisteria?
I just finished up my Vans part. We put out an all-girls video called Credits.

Who’s got the heaviest part?
The parts are just Una Farrar, Fabiana Delfino and me, since we’re the main ones who went on every trip. Then there are homies who went on a few trips with us who all have great stuff in there as well. We are all best friends so I can’t say who has the best stuff; that’s fucked up.

Top-three favorite girls in skateboarding, and you can’t say Fabiana.
What the fuck, Mike? Marisa Dal Santo and Elissa Steamer are the golden gods of all time. Then Fabiana Delfino and Alexis Sablone.

You are going to be a role model to kids. What advice would you give to an up-and-coming street skater?
I got lucky not having to do the contest thing. If you go the contest route, don’t go there expecting it to be awesome. I fucking hated it. I just wanted to go and hang out. The contests are only good to bring people together. The Street Leagues and Dew Tours are just not for me. They are not a homie vibe. It’s too sporty feeling, to me, at those contests. It’s just gross.

Had you been on a skate trip with all guys before the Am Scramble?
You know, I actually had not. This was my first real-ass trip with all guys. It was sick. All the guys who went and skated inspired me and did so much stuff I did not think was even possible on a skateboard. Just hanging in the van was always good vibes and getting drunk on top of the van with Jack and Griffin was the best.

I think you all killed it in ten days. It was amazing to see everyone rip so hard and get along so well.
Yeah, the boys really killed it. I just felt like a piece of shit. Skating was the worst part of the trip, for me.

Nah, not at all. You and everyone held their own. This Scramble was honestly the best vibes out of the three and the other two were top fucking notch.
Yeah, it was really special. I am super grateful I got to go and meet all those guys because I love them all now.

What was one thing you wish you had that one of the other Scramblers had?
I just wish I could ollie as high as any of those guys on the trip, honestly. Myles Willard, give me some of those legs. He was my favorite skater on the trip.

Myles is the man. Is turning pro something you are shooting for in 2020?
Oh God, I am not expecting anything. That would be fucked if it ever happened. 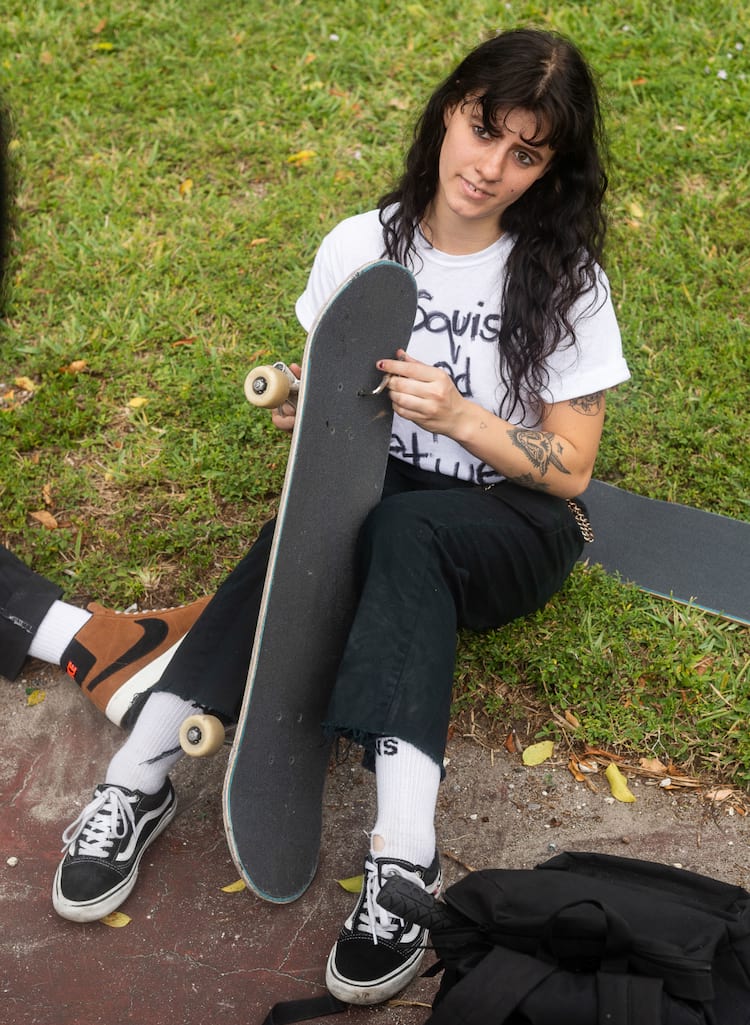 Your first ad for Girl dropped last year. How did it feel?
It still doesn’t feel real at all. I’m beyond stoked.

What would be your demands if you had any say so on your first board?
It would have to be black on black, the board would be dipped. I love a black dipped board and every board comes with a pack of smokes.

That rules! Who was the MVP? Who is turning pro first and who’s getting the cover?
Jack and Giovanni are both MVP! Jesse Lindloff’s ollie into the marble hubba should be the cover. It was crazy how he went up and just did it and I think you should turn Myles Willard pro. He is my favorite skater after this trip.

You did this bullshit to me on the trip every day so now it’s time for payback and yours will live in print. Kill, fuck or marry, who’s it going to be out of these three OG Girl team riders: Tony Ferguson, Mike Carroll and Sean Sheffey.
Fuck you, Mike, I knew this was coming. I don’t even like dudes and you know that. Fuck it, here it goes—I would have to marry Mike Carroll and I would have a quickie with Sean Sheffey and since Tony Ferguson lives in Canada he would be the easiest for me to kill, so he’s dead now.

Great answer, Breana. It was honestly a real pleasure getting to know you and hanging out with you on the Scramble. I hope we can do it again this year and I want to wish you nothing but the very best with your amazing talent on a skateboard.
Thank you, Mike. Love you too. 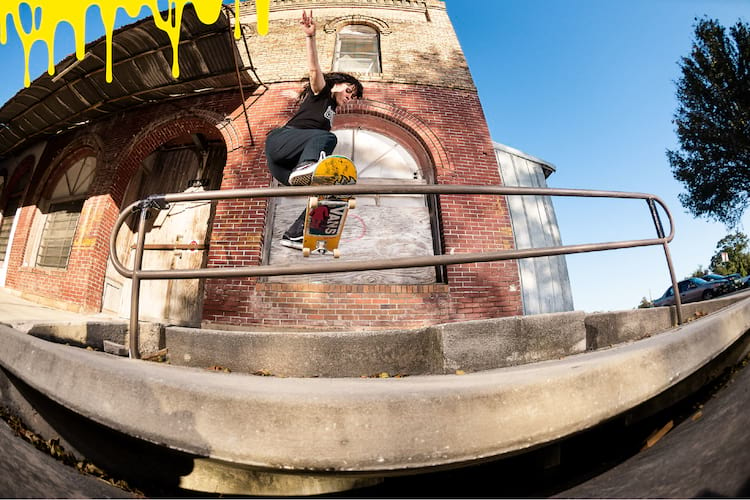