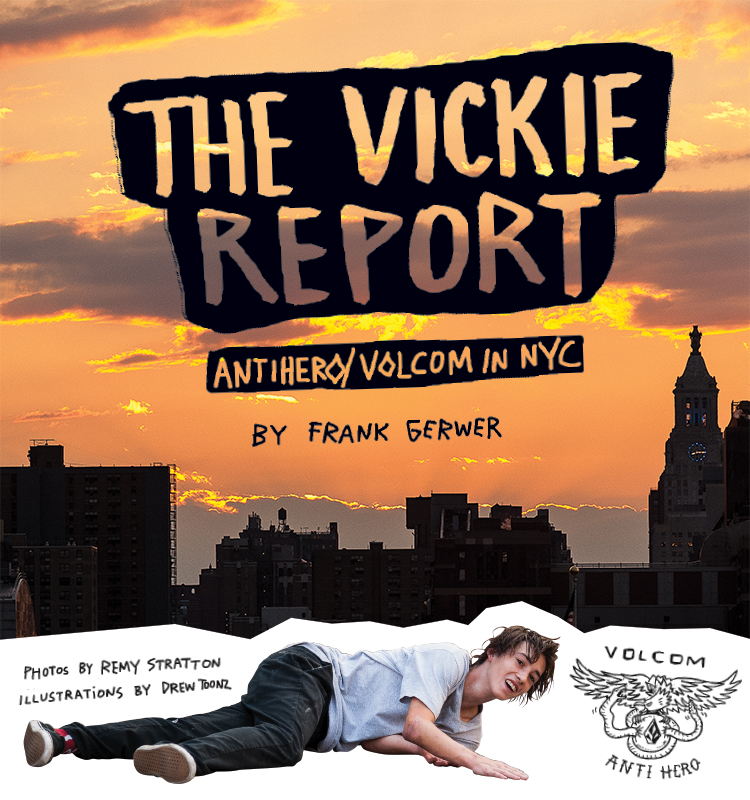 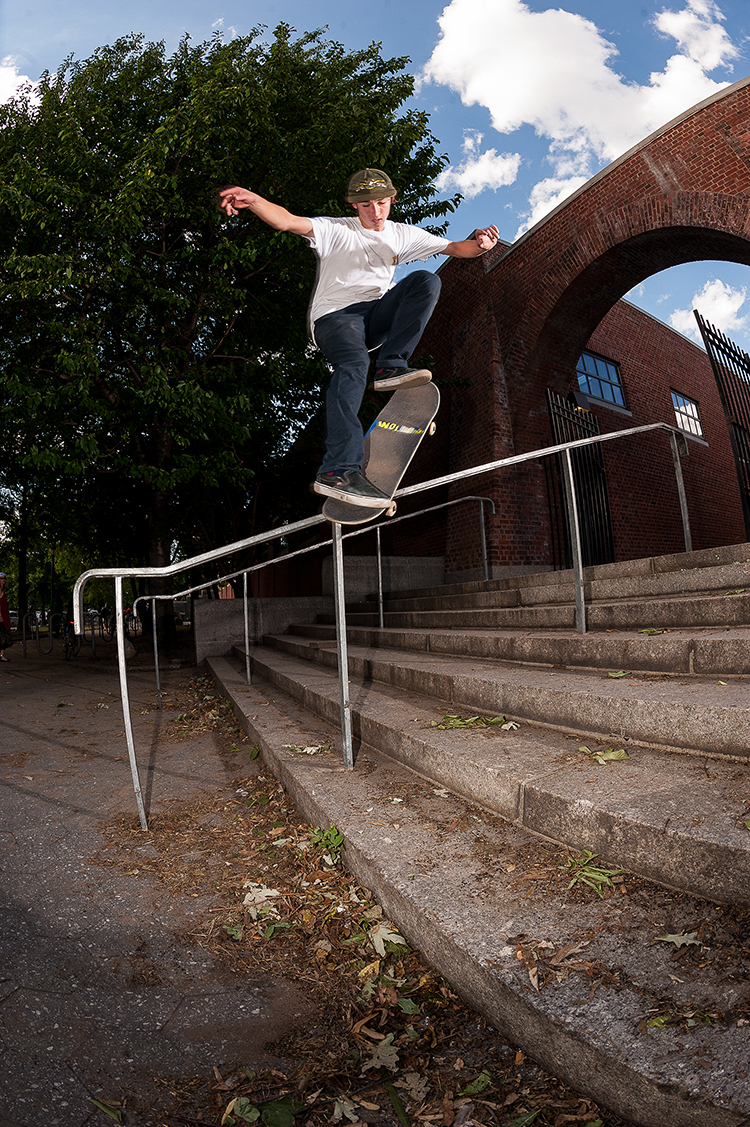 Daan, frontside crooks pop over before the kink. Who does this? Photo: REMY

Antihero and Volcom formed like Voltron with an extra chromosome in New York City. It’s exactly like Wu-Tang but without the RZA—just a retarded headless robot wandering the streets looking for stuff to smash and/or set on fire. 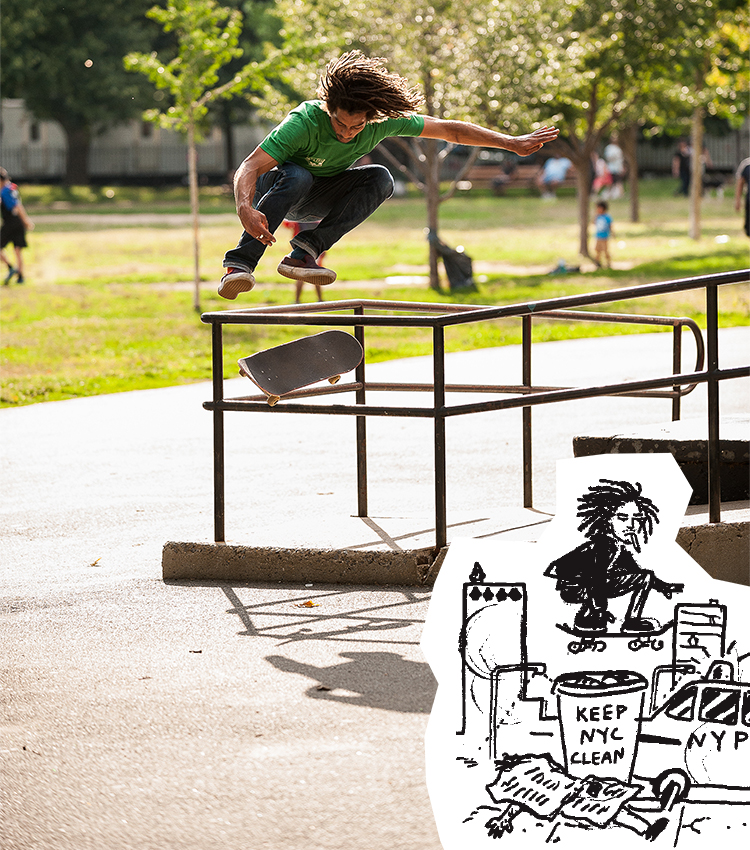 Grab your shillelagh whilst Pfanner does this Kicky McBagpipe. Photo: REMY

DIYs to all-day street jammin’, the Vickie Report has it all. The crew met up at an undisclosed location in Brooklyn. We had a place to drop our bags now. “Holy shit! Look at this hot mess! Is she alright?” “She’ll be fine.” We hit the streets with our friends and the boys made quick work of just about everything we touched. Pfanner laid down a heavy Kicky McBagpipe at the McCarren Park bump to bar. For those of you unfamiliar with the Kicky McBagpipe, it’s just like the Kilty McBagpipe but with a flip. “Anyone seen Vickie?” “Yeah, she’s slugging back some more of Grandpa’s cough medicine in the gutter; she’s okay!” 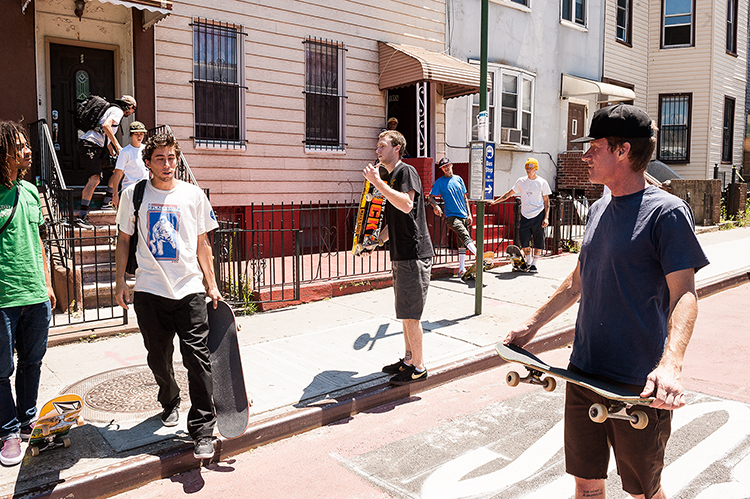 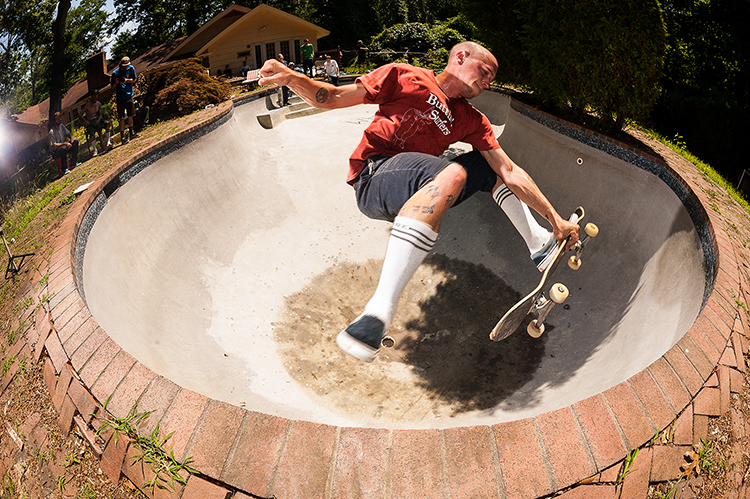 The coping was so hot you could’ve fried an egg on that shit so Raney stepped off with a slob fast plant. Photo: REMY

We proceeded down the waterfront where Chris was hopping barriers and grinding the backs of benches like they were curbs. Ended up in the Financial District at about 4:30pm on a Wednesday in the midst of all the cops, suits and security. 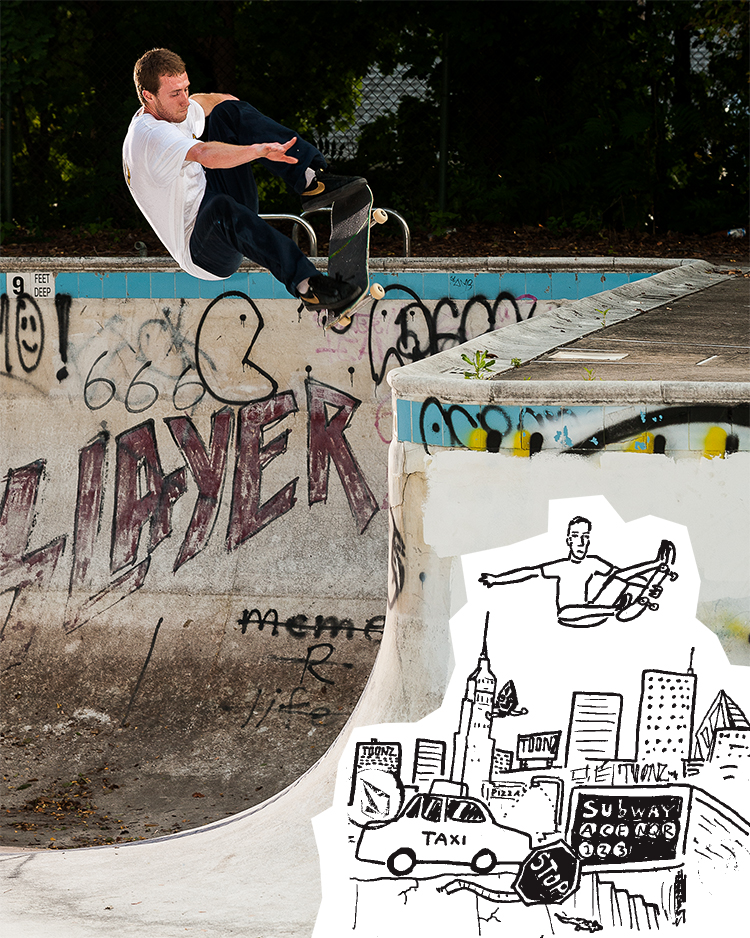 Daan popped out of the beer garden at Pyramid Ledges with a cold one and back tail firecracker’d through the shit storm of humans and buses. “Holy crap, where is Vickie?” “She’s trying to stand up over there. She’s down, but I think she’s doing good.” We shut the day down with a casual sunset on the East River and the boys were out ‘til the wee hours. After a quick nap, the day was back. We got to a rail that was a little kinky so Daan opted to skip the kink and just pop over. “Hey, have you seen Vickie?” “She’s folded like a taco and her leg looks broken. Is that normal?” “She’s fine.”

Daan is from Holland but he still lit up an Independence Day tailslide firecracker at Pyramid ledges. Sequence: REMY 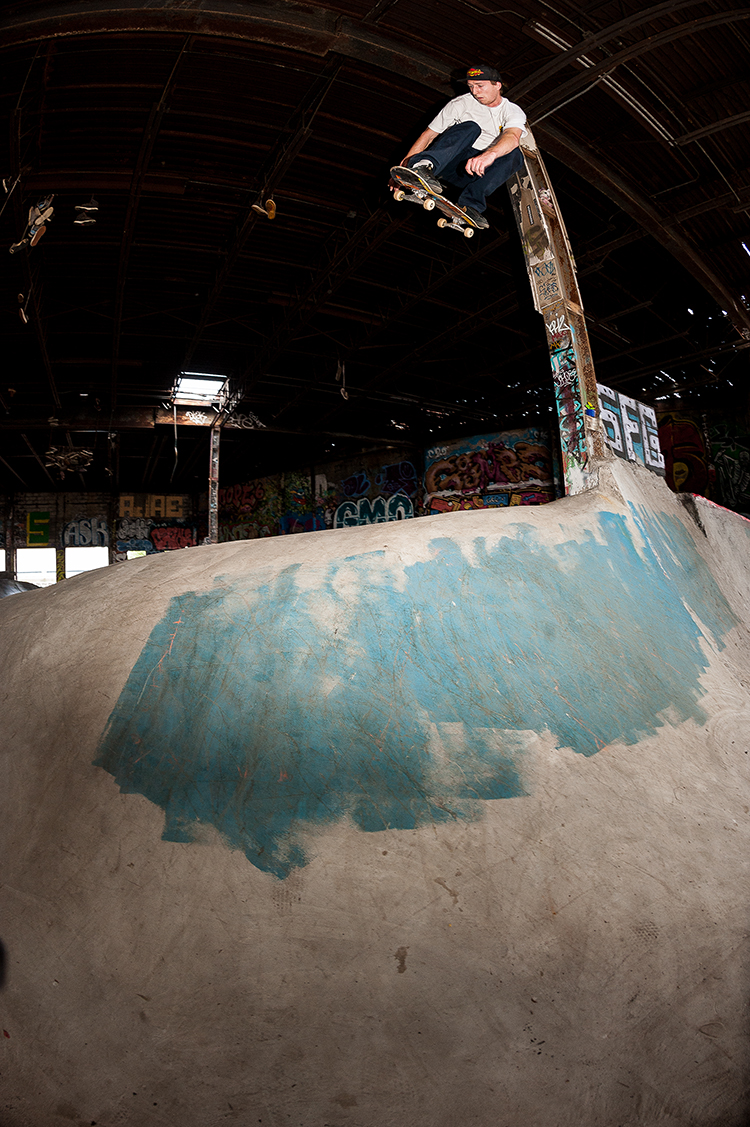 Daan with the PJOTF, aka the pole jam ollie to fake.  Photo: REMY 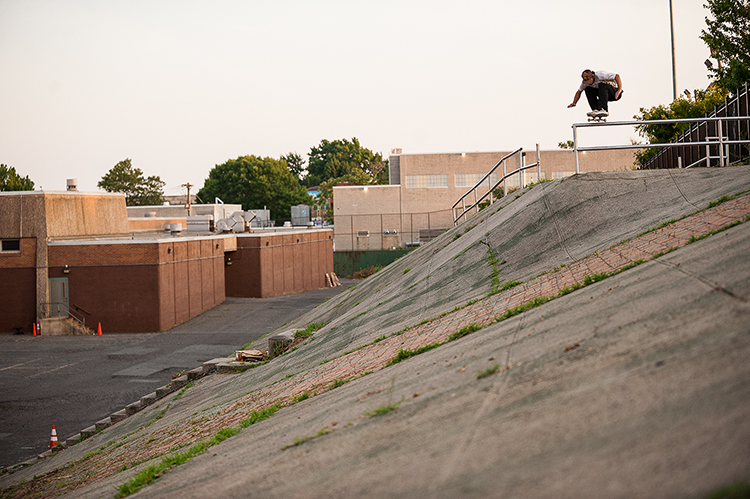 If you like spice, then you’ll love crust. Austin Kanfoush, ollie over into the crust bank. Photo: REMY 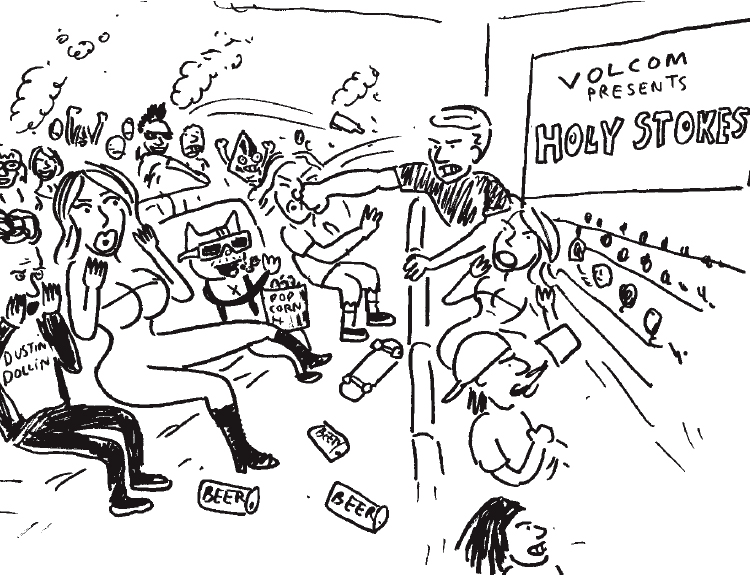 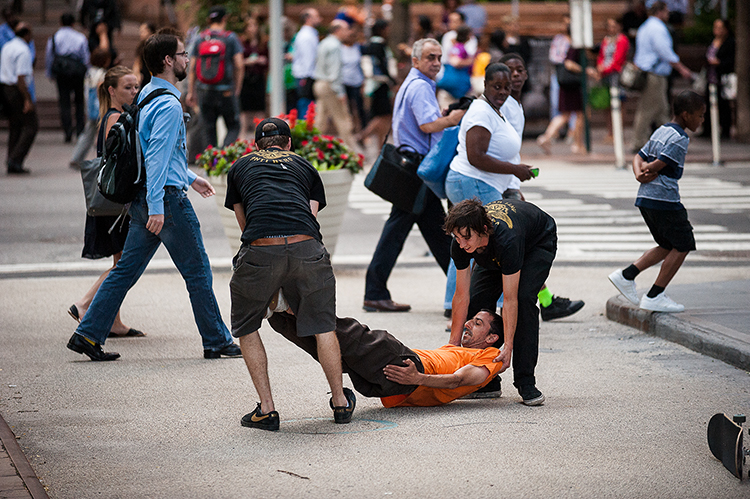 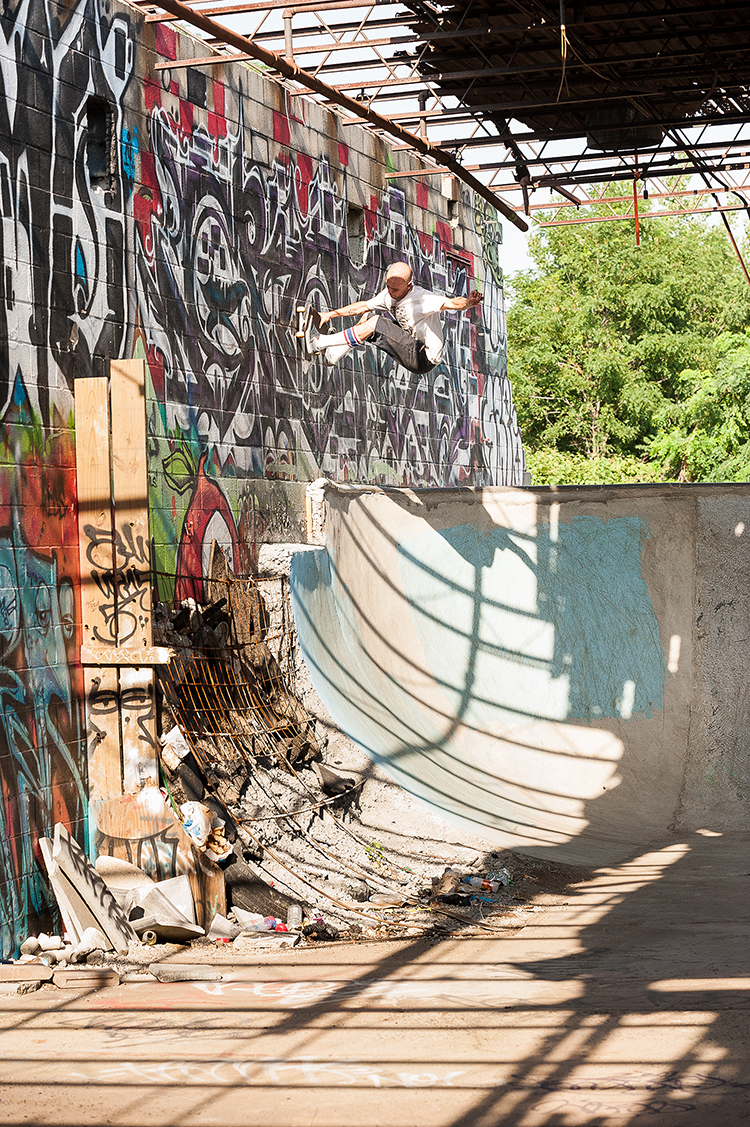 Raney, Off the Wall at Shorty’s. Photo: Remy