Finding empty pools is a journey, and just like using Waze there’s more than one way to get there. The simplest method is to just look behind vacant houses. A For Sale sign in the front yard, overgrown grass or a remodeling dumpster in the driveway are all signs of an empty home. Might as well peek over the fence and see if there's a pool back there. There’s also the knock-and-ask-for-permission technique. Seems kinda strange. Why would a total stranger let you hang out in their backyard and skate their pool? No idea, but you'd be surprised how often this actually works. Offer to do some yard work or slip 'em a 20-dollar bill and the success rate rises. But what if—just what if—you could get people to call you and let you know when they have empty pools waiting to be skated? Well, that's exactly what John Paul had in mind when he got a custom magnet made for his truck. Now, not only does he get calls from pool owners all over the Phoenix area, but he no longer looks suspicious when scoping for empty pits. Just call Paul if you need some maintance. Wait, maintance? Don't you mean maintenance? Maintance (or tance-ing for short) is when you get the call to come and drain/clean the pool, inspect the transition, toss back a few cold ones and make sure the coping grinds. Here's some backyard beauties that John Paul and his crew have been tance-ing lately. –Joe Hammeke

Pool 1: Pigeon Shit
This one’s been going for a few years now. The house is vacant and the neighbors are used to skaters coming and going—they don’t give a shit. The neigborhood is pretty run down and that’s usually a good sign that the pool’s a go. The shallow-end stairs are epic in this one.  Come to think of it, the entire pool’s pretty killer. The only drawback is the house’s awning extends over the shallow end and is full of pigeon nests. Phoenix pool guru Quart had his eye on the house for years but it’s a front entry, so it's kinda sketchy.  One day Joe Dirt decided to man up and open the gate. The pigeon-shit piles were knee deep in the shallow end. Every time you skate it, even if it’s twice in one day, you gotta clean up pigeon poop that spans the entire shallow end.  And you better get it really clean or you might get a staph infection like Willis Kimbel did last year.  But it’s always worth the extra effort because this one is buttery and not a bust. 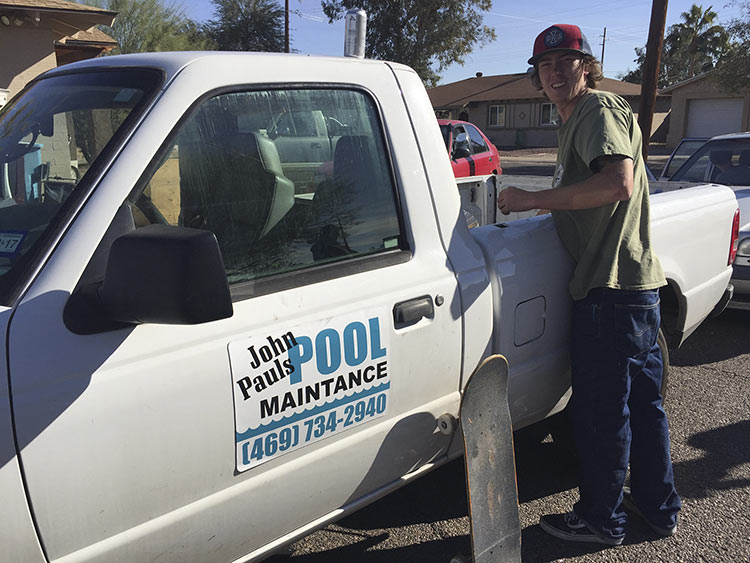 John Paul loaded up and ready for some pool maintance 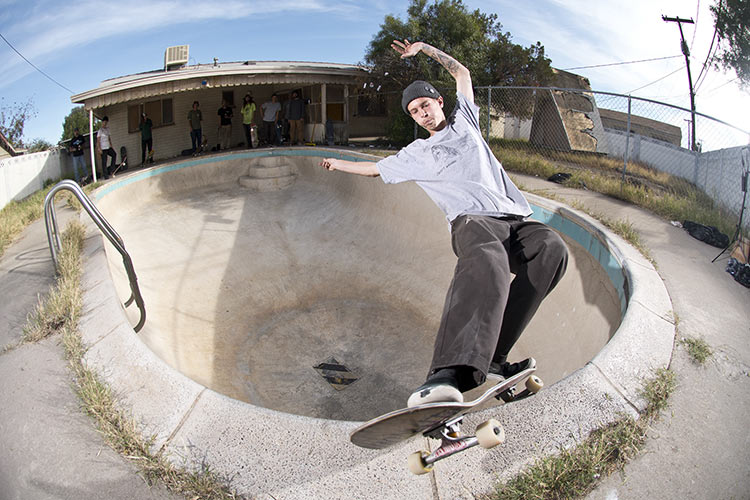 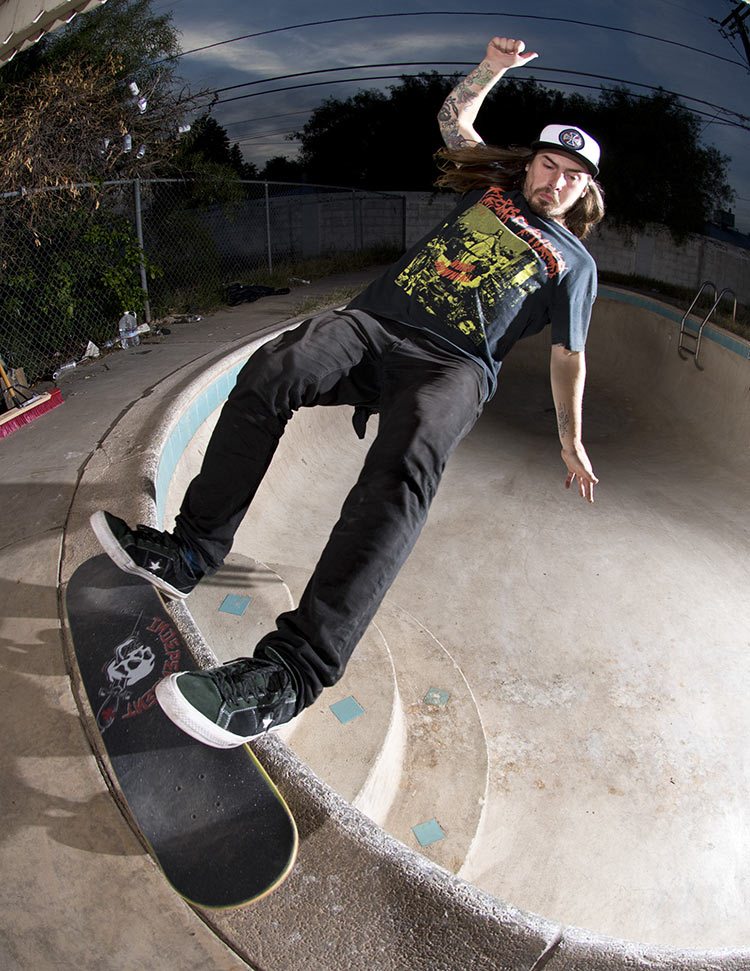 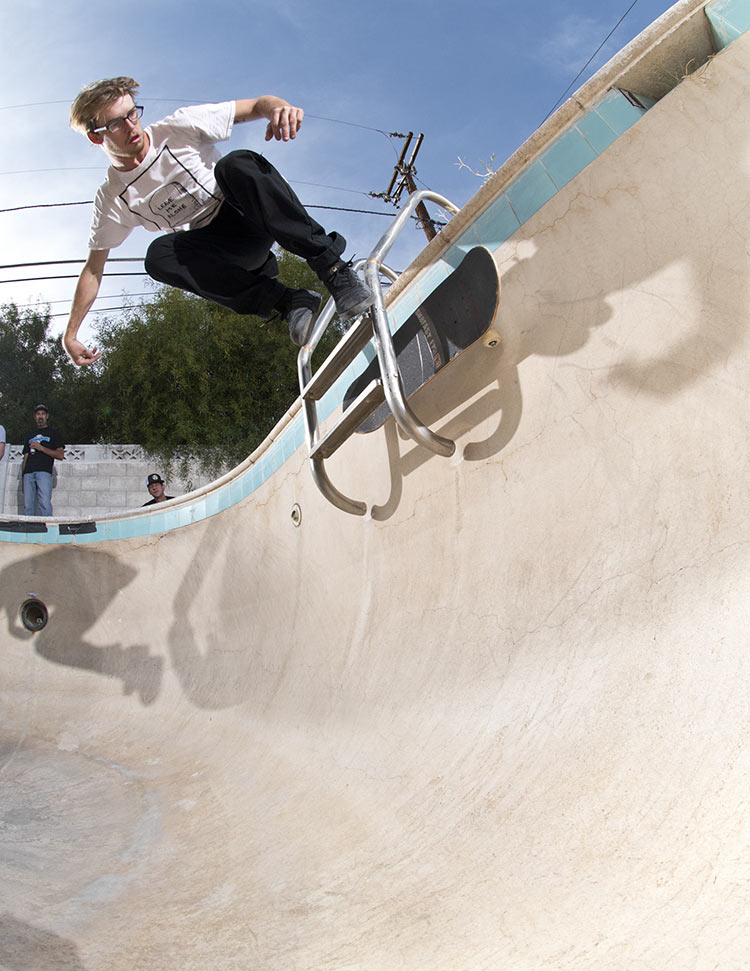 Pool 2: 16th Street Ameoba
Funny story about this one: Hoss Rogers found it and on one of the first few sessions Kenny G was brought along and he immediately recognized the house. “I used to party here in high school!”  He exclaimed. He broke it down like this: there was this hot chick he went to school with and her mom would let her throw parties on the weekends. The deal was that if and when the cops came, the mom would sneak out the back door so as to not get busted. Party mom must have partied too hard because the house was foreclosed upon by the bank. Unless a skater buys it, it's probably gonna be a bust when somebody buys it back. Get some while you can. 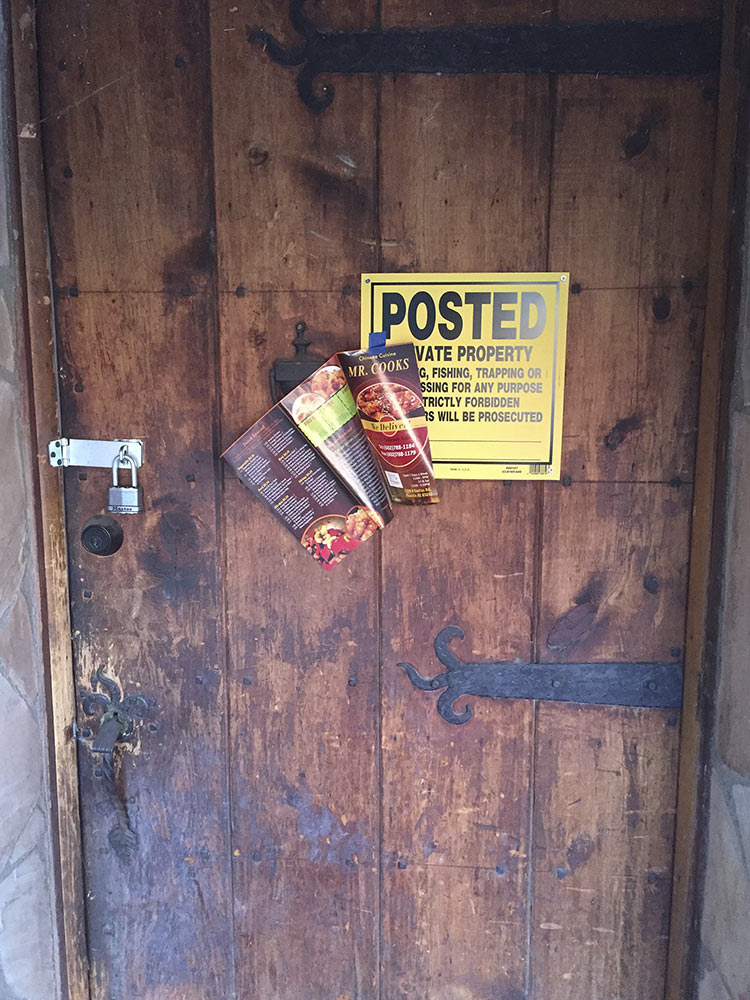 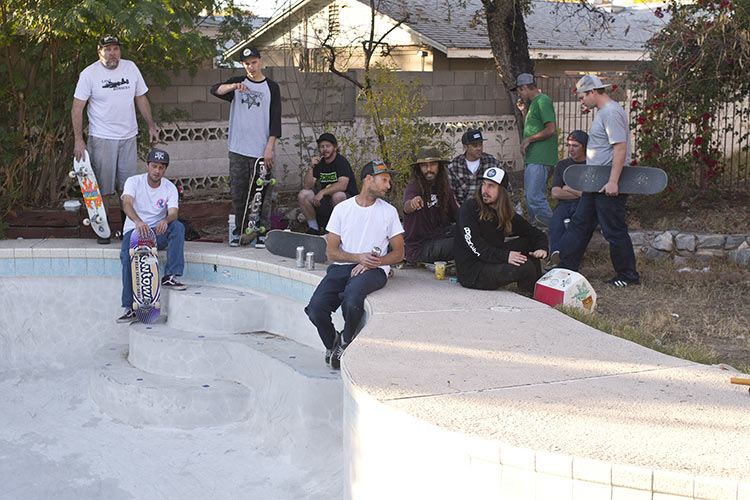 Heavy crew at the Ameoba

Rayce Davis, boardslide over the birthday cake with an extra slice 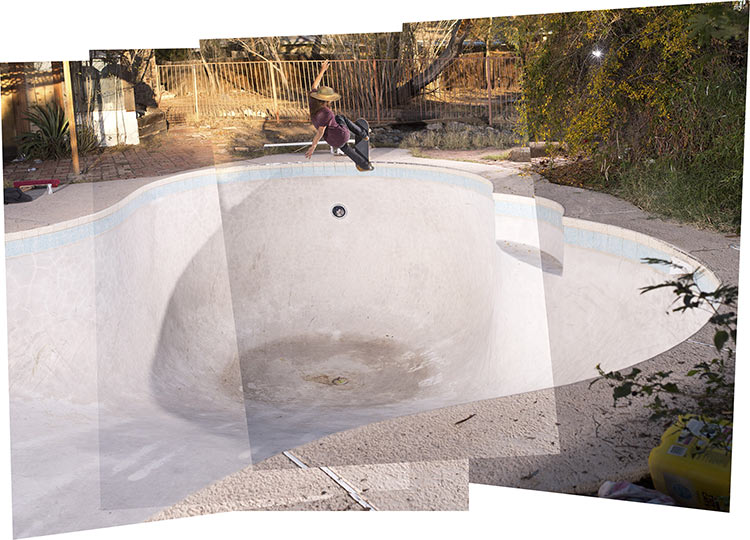 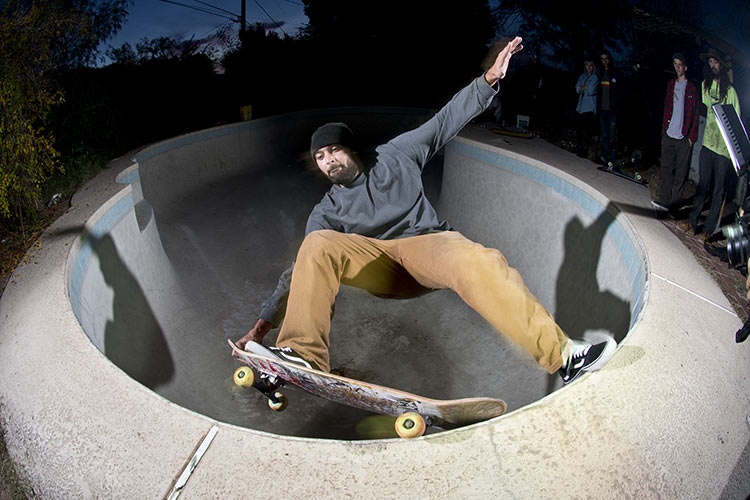 Pool 3: Kenny G’s pool
This is the first pool the aforementioned Kenny G found on his own. It’s behind a rough house but it's in a really nice neighborhood. When I was sent the address I didn’t think this one was gonna be a go. You know, it's in one of those areas where neighbors actually look out for each other's property and shit like that. The place looks pretty clean from the front but the backyard is a jungle. With all the overgrowth it's pretty easy to forget there's a Whole Foods down the street. 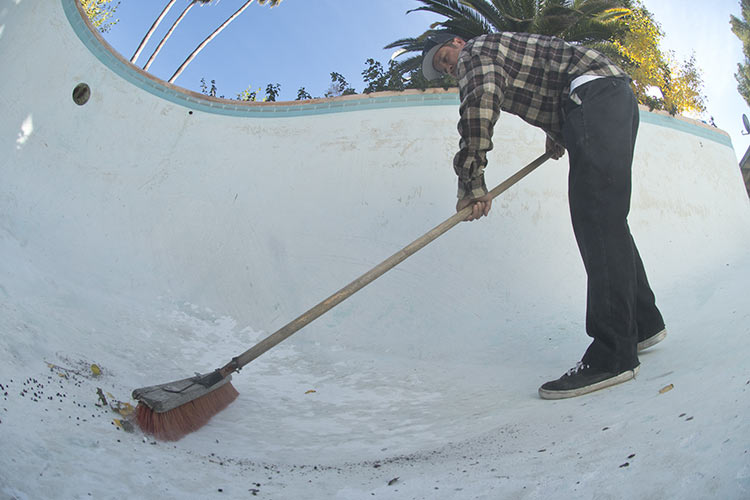 Bright and early, Chris Livingston arrived at Kenny G’s pool ahead of the crew so he could do some sweepers 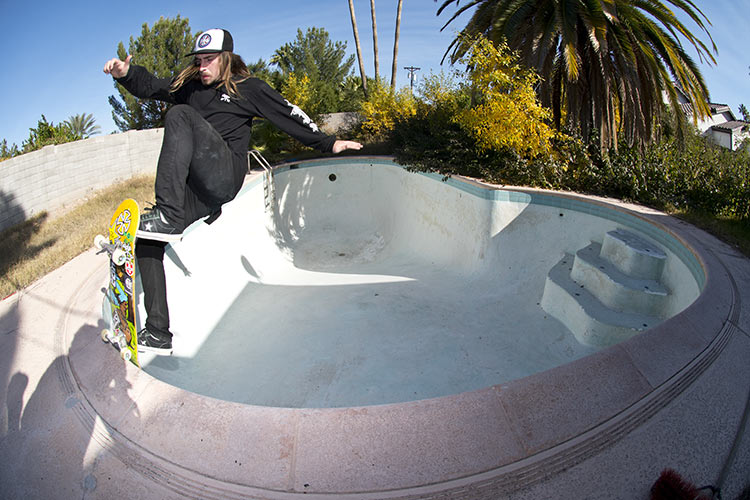 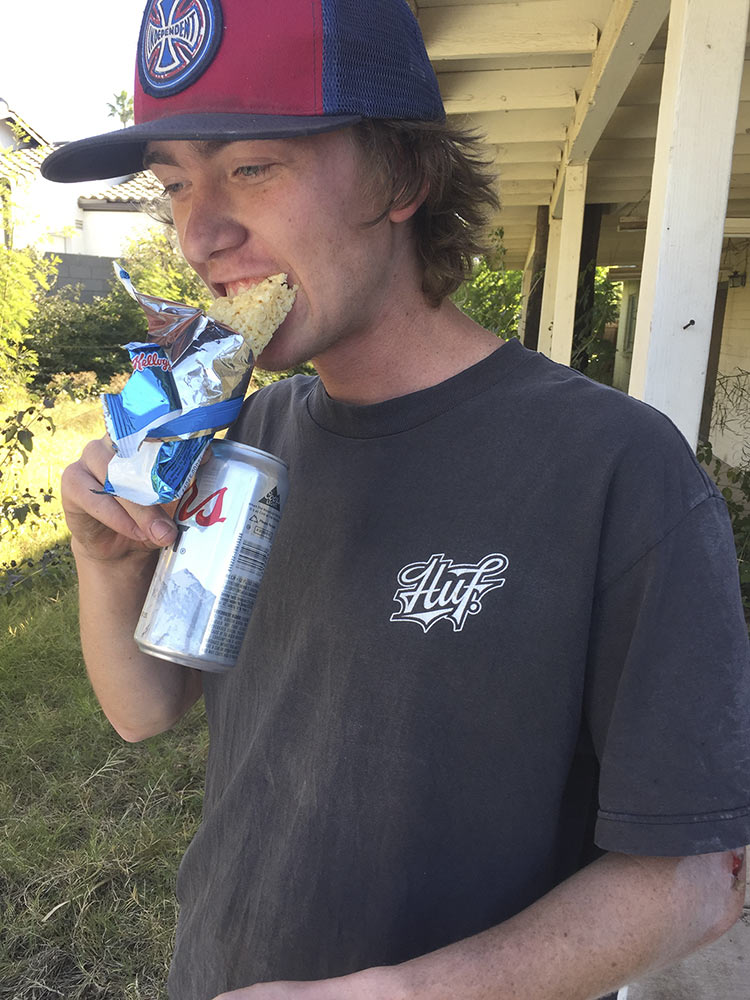 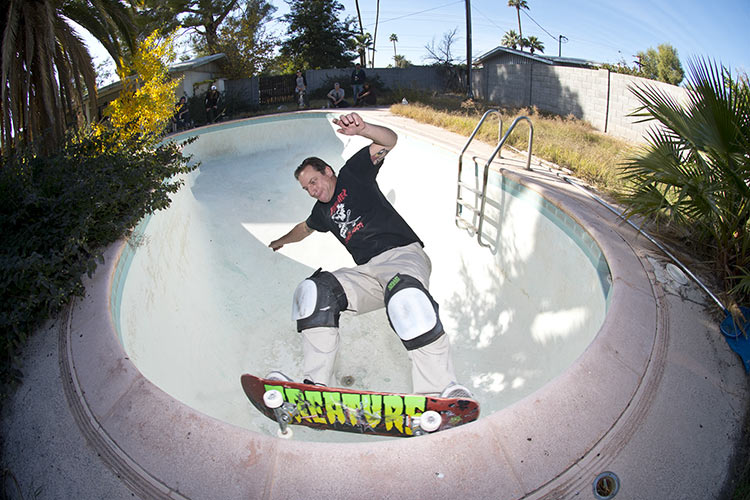 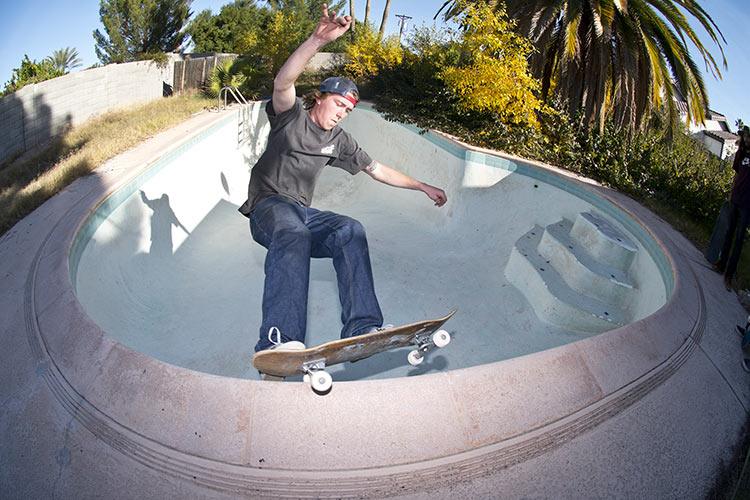 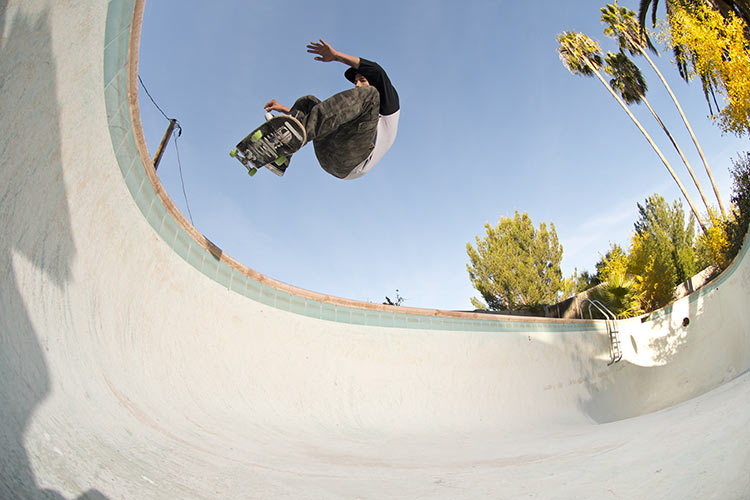 Pool 4: Razors Edge
Anyone who’s been to Phoenix to skate pools knows the West Side is full of them. It's the rougher side of town where most landlords are slumlords and people can’t afford to maintain their property. There's also lots of vacant houses with empty pools and every block has an alleyway—perfect for peering over fences unnoticed. We drove by the front of this house and it wasn't looking so good. There were cars in the driveway and the neighbors were throwing a party. But supposedly the locals were already in the back, so we parked at the end of the street and crept through the alleyway. Sure enough, the session was going strong. Turns out the neighbors are always raging and they tell their guests to park in the drive next door. This one's named Razor's Edge because of the sharpened lip in both the shallow and deep ends. But besides the added danger, this pool is a smooth one. Big tranny, especially for AZ, means you're gonna get more than just grinds. 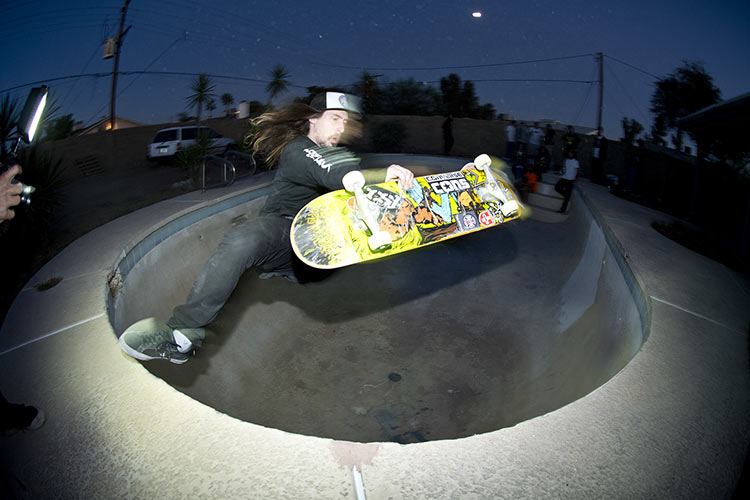 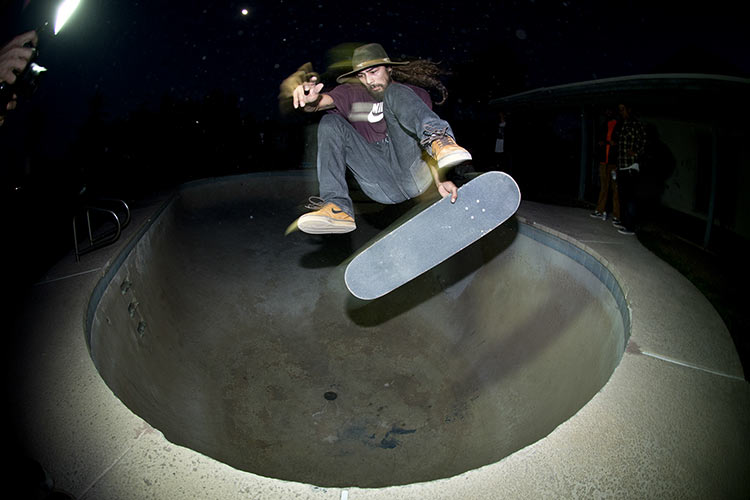 Cody Lockwood, kickflip stalefish with only a camera to light his way 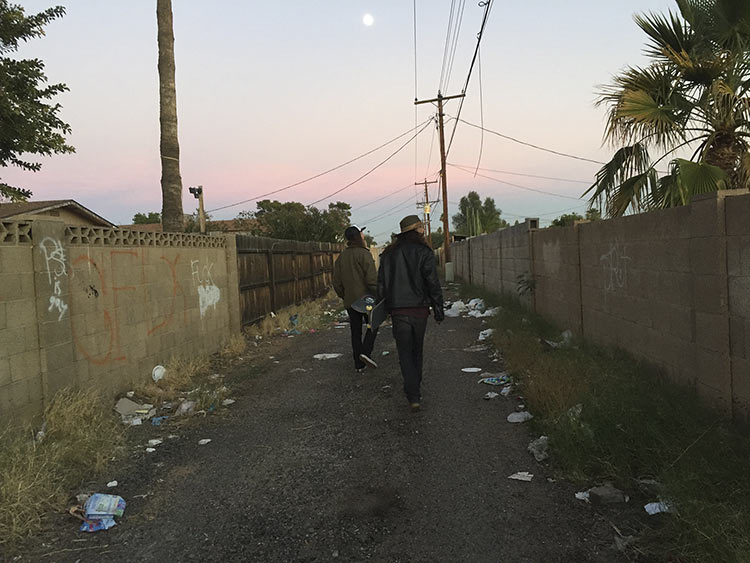