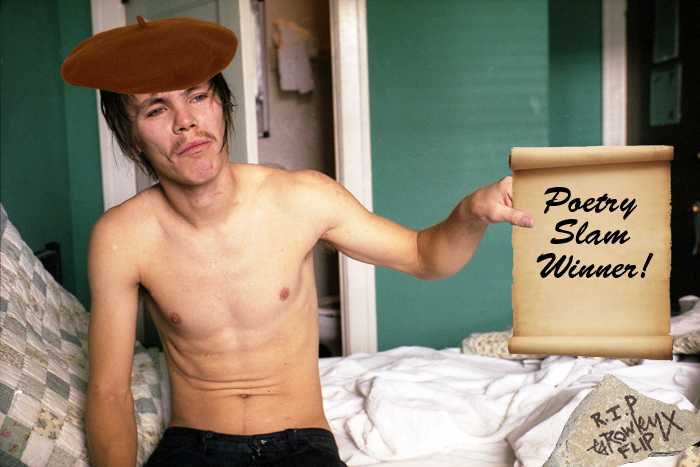 We got many excellent entries for the Rowley Poetry Slam. Thanks to everyone who sent one in.

Here’s the entire stack. The winning poem is at the bottom. 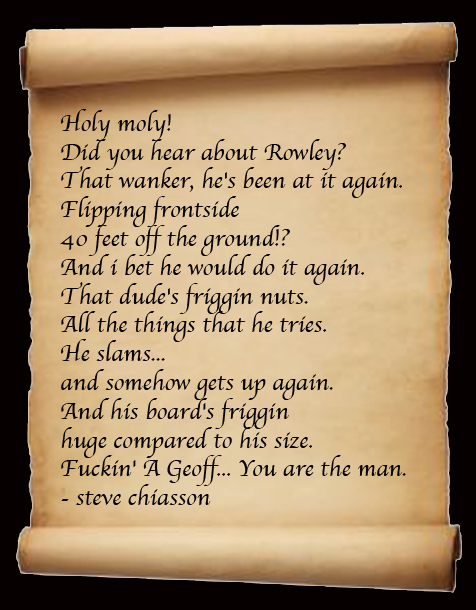 Steve Chiasson took note of how to pronounce Geoff’s last name, but his wild rhyming style proved too challenging for the judges. 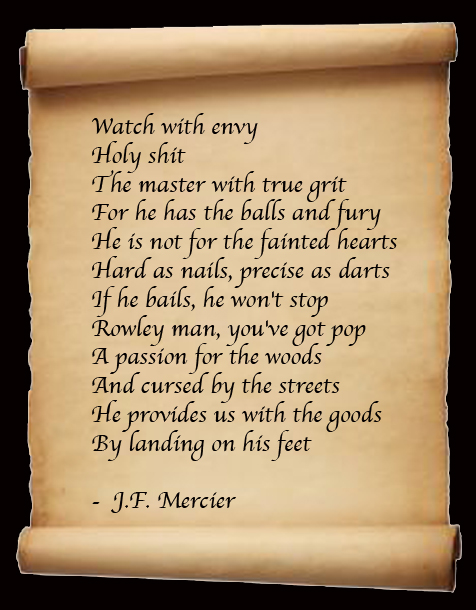 A poet known only as ‘Leo’ actually sent in a harsher poem first, but then traded it out for this straightforward nugget of praise. Life’s too short to wuss out, dude. 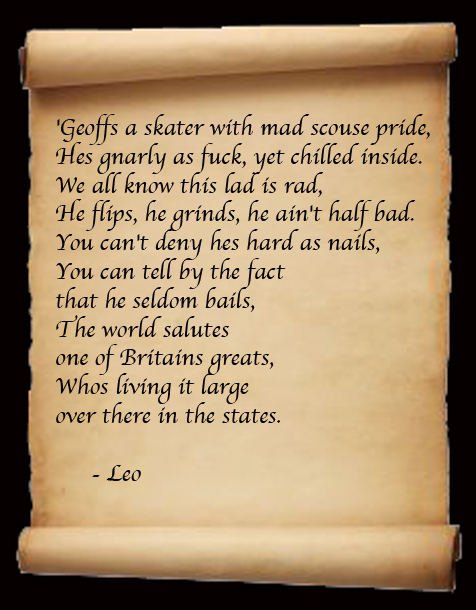 Ivar Murd takes a creepy stroll down memory lane but makes up for it by acknowledging the inherent fruitiness of poetry writing. 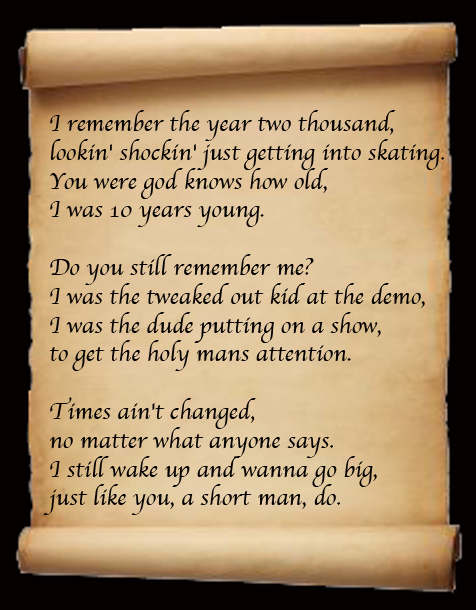 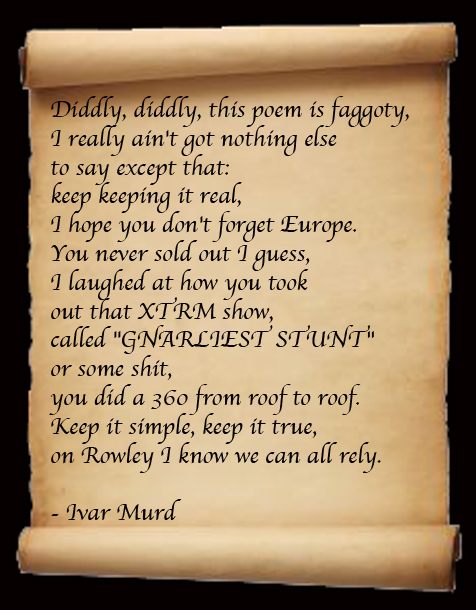 Michael Worful was a finalist with his classical style and ability to rhyme ‘cross hairs’ with ’stairs.’ However, it’s probably not a good idea to use the word ‘metaphorical’ in a poem. 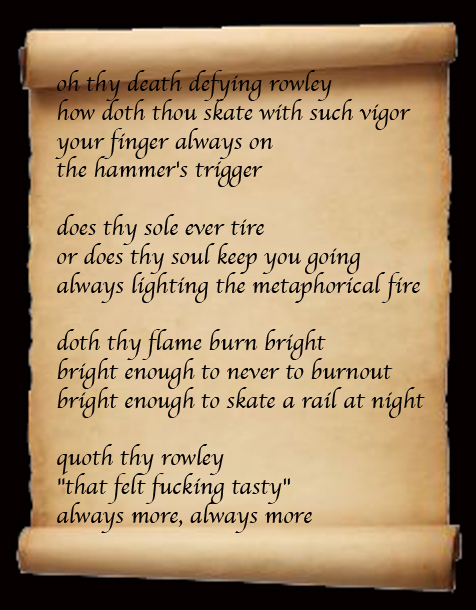 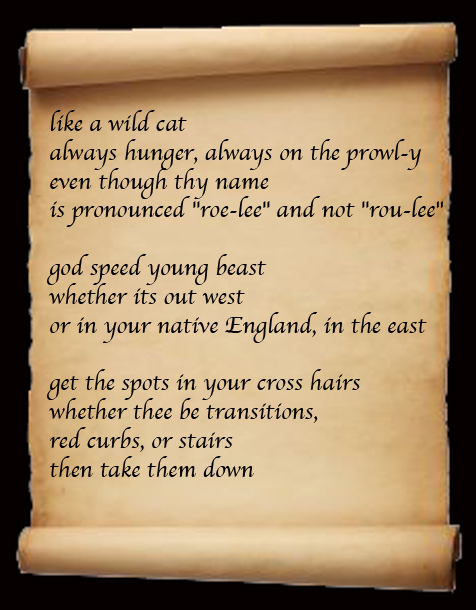 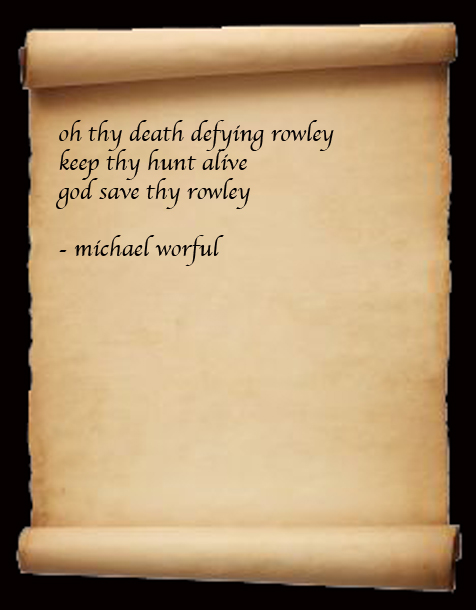 Jesse Cardenas brings the poetry pain, borrowing a page out of the Bushwick Bill school of rhyming but not being afraid to pair ‘cower’ with ‘cover.’ And he calls Reynolds a ’square!’ Heavy stuff. 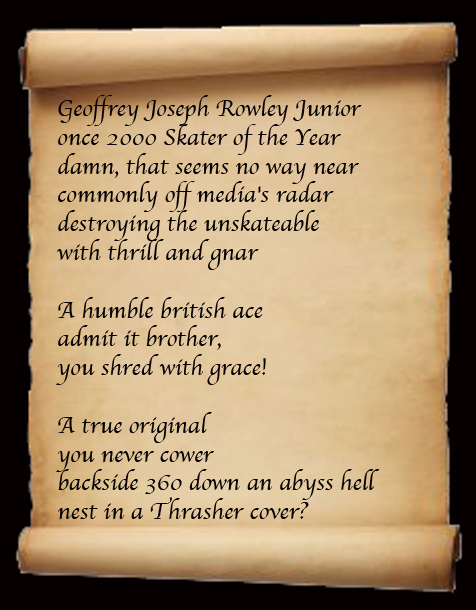 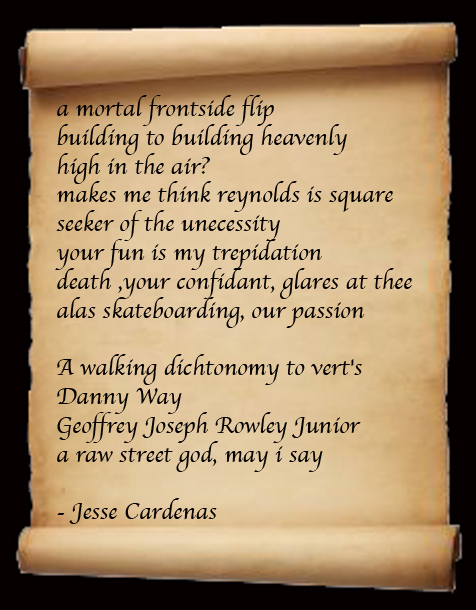 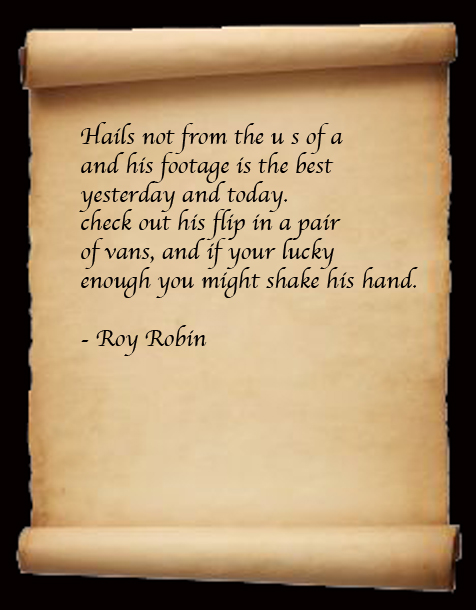 Jesse Hlebo used the Slam as a chance to unload some non-Rowley poems he had lying around. Here’s one that celebrates the romance of decay. Nice try, but please stick to the assignment, Jesse. 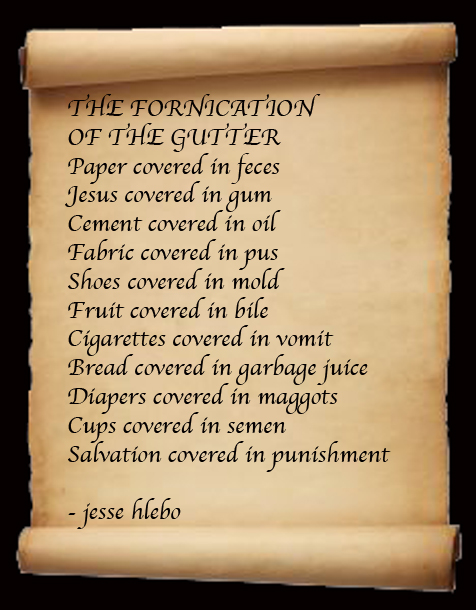 Isaac Chalker turned this shit in like late homework he did on the bus. It’s got an honest, no-bullshit quality, however. 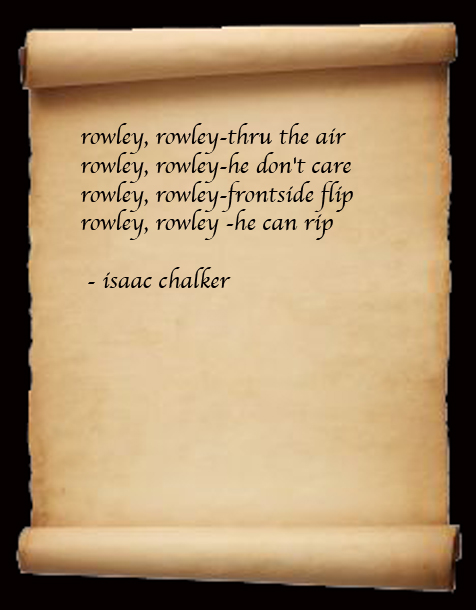 ‘Depth like a stone?’ You lost me on that one, John Hodge. 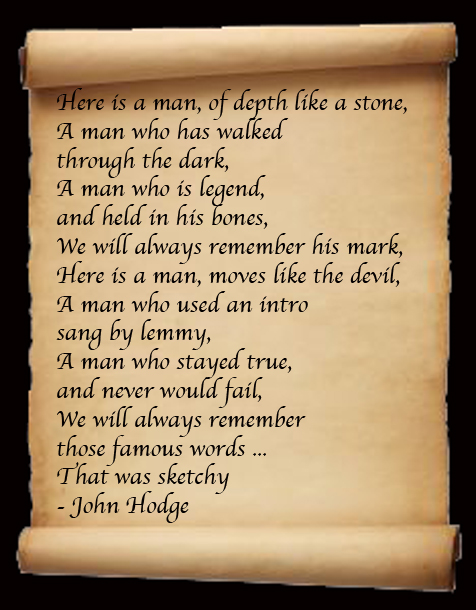 The Vans marketing team will be delighted to see that the xl3 promo made it into Justin LeCompte’s work. 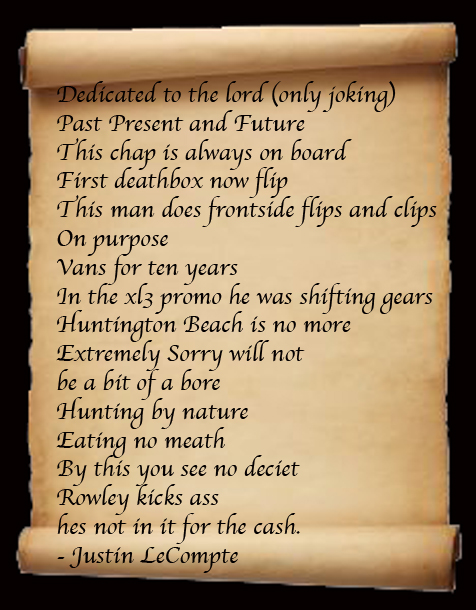 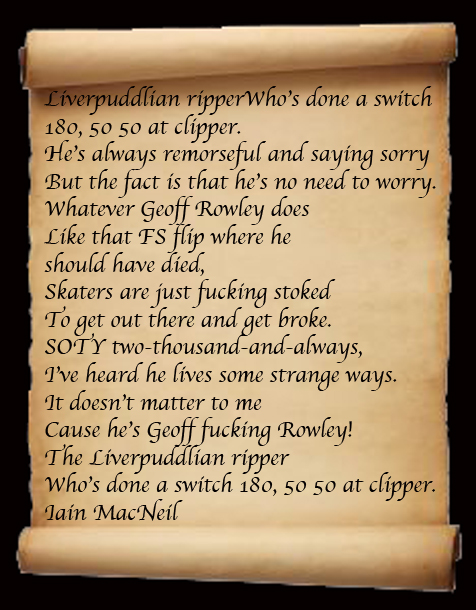 That switch 180 to 50-50 at Clipper really made an impression on Iain MacNeil.

Marc Downie ain’t afraid to broach a touchy subject in his poetry. 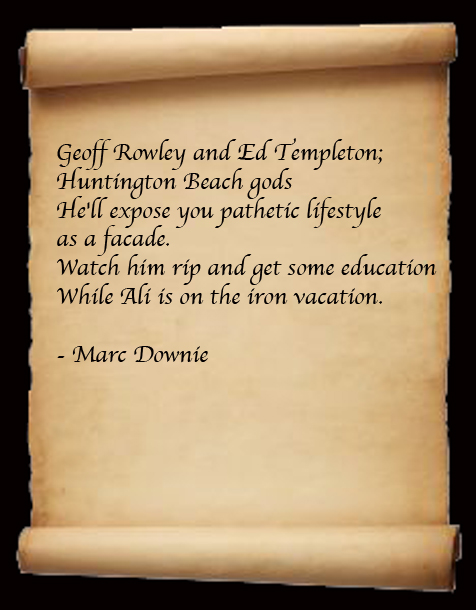 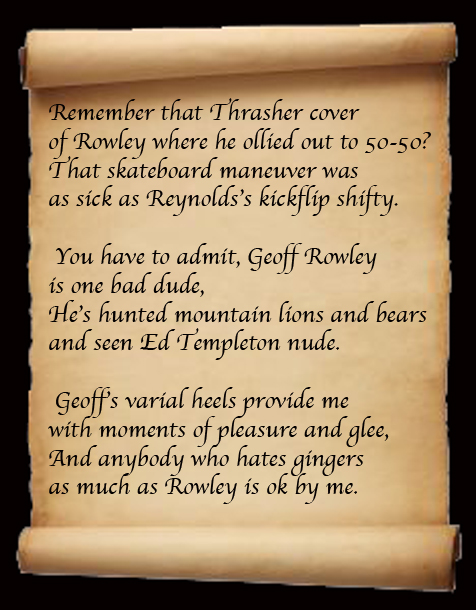 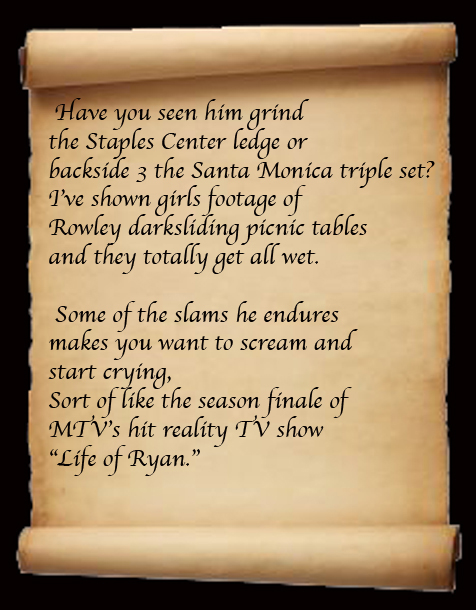 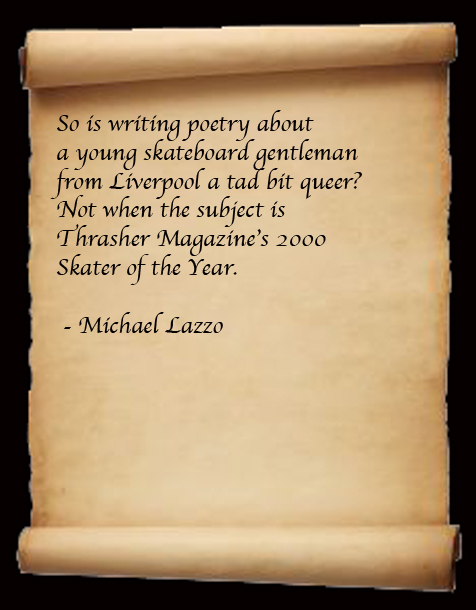 As you can see, this poem has everything: Ed naked, romance, pop culture criticism, Ginger bashing and even some half-hearted attention to structure and rhythm.

Thanks again to everyone who entered.