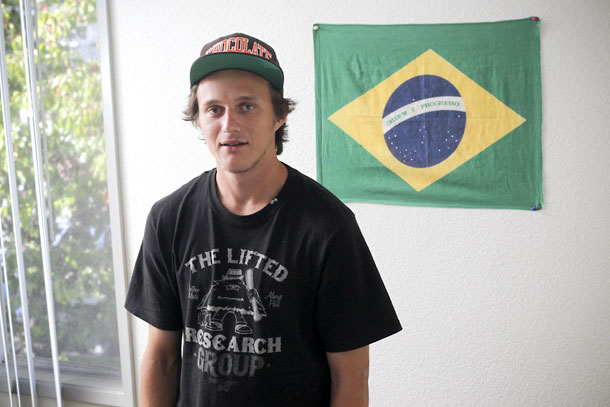 
This part's about to come out and everyone's going to see you rip, but nobody knows shit about you. Let’s start with the basics. How old are you and where are you from?
I’m 20 years old, from New Hamburg, Brazil. There's nothing famous there.

Can you explain to America what "bunda" is?
For sure. It's the perfect booty. They don’t have Bunda here in the States. It’s something you need to go to Brazil for and experience yourself.

Any other skaters come out of New Hamburg?
From the same city, no, but from nearby you've got Luan Oliveira, Dwayne Fagundes, and Carlos Ique.

How'd you get into skating?
I started skating when I was seven or eight. I'd go to my cousin’s to play and there'd always be people skating in front of his house. I got stoked just watching them. Then my mom got me a board and I was hooked. 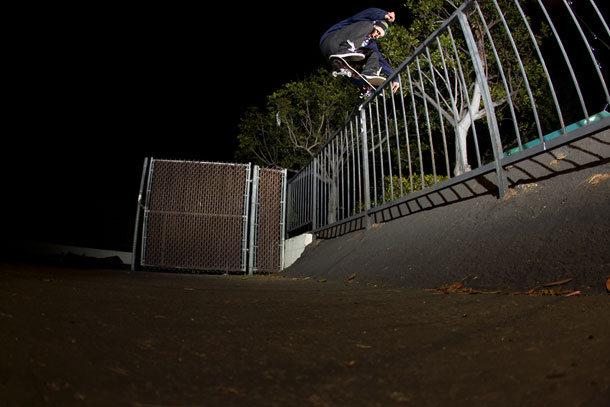 I hear you used to be pretty good at soccer as well.
I've played since I was born. My dad actually used to be pro, so I was always on teams and would even get to travel around a bit. Then one day I rolled my ankle playing soccer and couldn’t skate, so I quit playing.

Was your dad bummed?
I think it was always a dream of his—for me to go pro as a soccer player as well—but he's super stoked on skating, too. He even let us sticker up his old van, and he'd always take us skating or drive us to contests that were really far away. One time he even took us to Uruguay.

What do you miss most about Brazil?
Family, friends, and of course the bunda. My Dad’s bbq, too. He kills it with the tri-tip.

How did you get the nickname "Dudu"?
That sounds kind of fucked-up in English, but it's just 'cause my name is Carlos Eduardo Ribeiro, and it’s an abbreviation of Eduardo.

So it’s not a mean “Frog Face” type Brazilian nickname?
No, not at all.

That’s good. How'd you wind up getting on LRG?
When they started the Brazil program a few years ago they hit me up to ride for them. Then when I made it to The States I started hanging out with Rodrigo Petersen. He'd take me on the sessions with Rob G and Tyrone and it kind of just went from there.

What’s an LRG trip like?
It really feels like a family. Everyone is super mellow and the vibe is always really good. I love LRG trips.

How was it filming this part for LRG?
It was dope. Skated around Long Beach and got to go up to San Francisco and San Jose with some of the guys.

I know you had to battle a few of the tricks in the part. What was the most amount of times you had to go back to a spot?
Fuck that shit. I thought I was cursed. We went, what, five or six times back to the same spot? That was like a month of going out and getting broke, I was so bummed.

On a positive note, you and all your Brazilian homies in Costa Mesa have been helping out with a skating charity through the Boys and Girls Club.
That’s all my friend Vina. He started the Next Up Foundation, where he gets boards together and sets up ramps for kids to skate in low-income neighborhoods. I think he does it twice a week—once at a school where he sets stuff up, and once at the skatepark where the Boys and Girls Club is at. We go skate with the kids and get our friends to come out and support.

Last question: Who do you think has the best switch flip out?
A bunch of people have good ones, but I have to say Stefan Janoski.

Thanks, Carlos.
Thank you!

Rumors about the guy with the craziest tech snap and wild lines will be put to rest soon. Carlos' exclusive full-part is coming this Friday. Brought to you by LRG and Thrasher.