Few have ridden the wave of the skate industry like Chad Fernandez. He had photos in the mags at eleven years old, rode for the original Creature team, invented moves in "The Storm," had pro shoes on Osiris and Globe and starred in one of the most infamous skatesploitation movies of all time. But through ups and downs Chad never stopped skating. And as his "Nandez" video part (premiering tomorrow) will show, he's not giving up so easily.

Let's get some basic stats out of the way for the new kids who don't know you and for the older skaters who maybe haven't heard from you in a while. How old are you, Chad?
Thirty-seven years old.

Where do you live?
Santa Monica, CA. 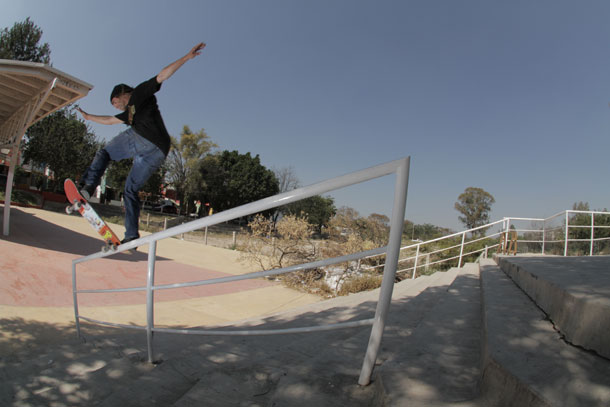 Gap out to a long noseblunt slide. Photo: Garcia 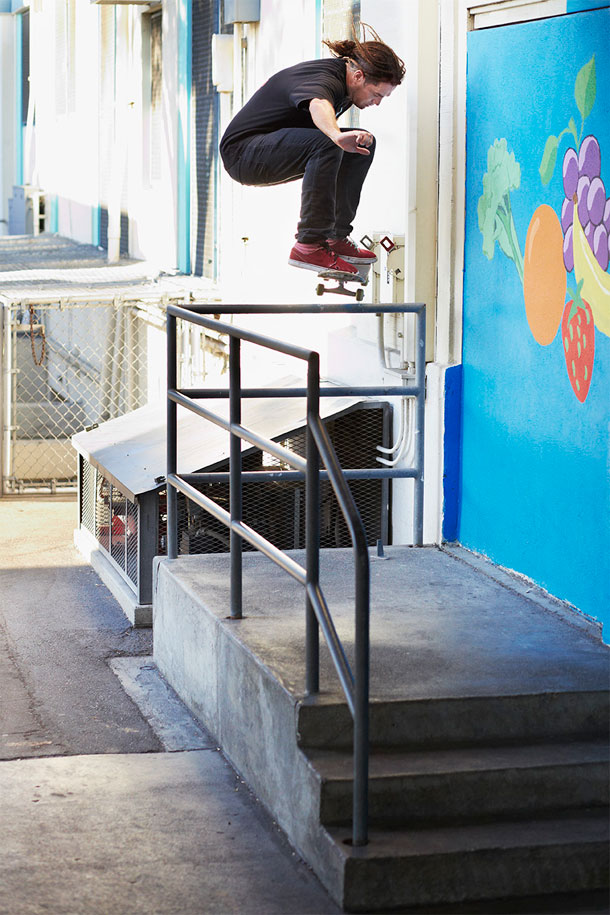 Quick feet with an ollie up, ollie over. Photo: Swainston

How long have you been skating?
Twenty-seven years.

How long have you been pro?
Seventeen years.

Who are your sponsors these days?
Fifth Avenue Skateboards, Brooklyn Projects, Independent Trucks, Diamond/Grizzly hook it up as well as Ashbury. 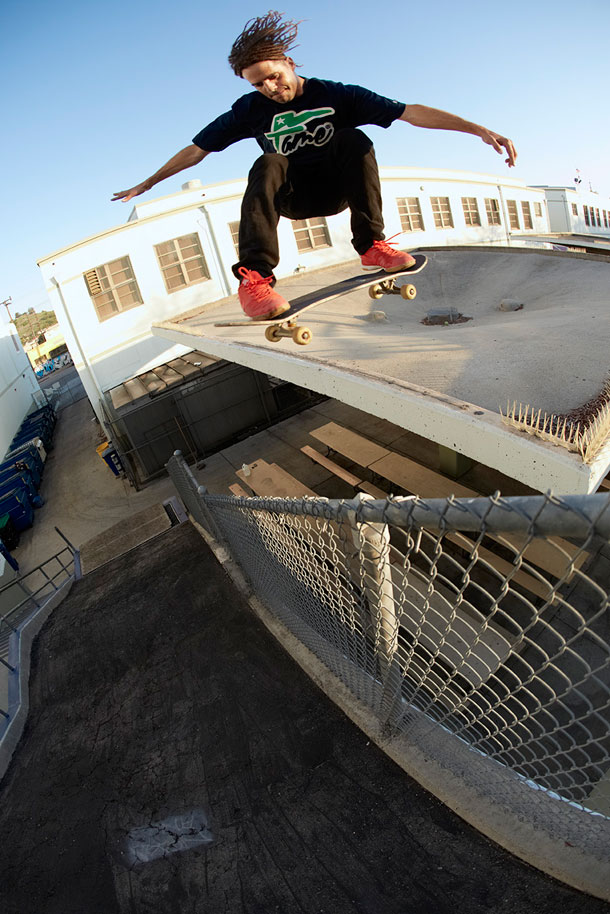 How does your life today compare to your life ten years ago?
I'm ten-times happier. I live by the beach and get to skate every day. I'm very grateful. I have adult responsibilities still, but how I view day-to-day life has completely changed for the better. Life is great.

What keeps you motivated to keep skating and making these videos?
I've been skating for so long now that not skating would be weird. Working at different tricks, stacking clips, all these new amazing parks being made, watching skating evolve - all these things motivate me. At this point filming video parts has become a creative outlet. Being able to focus on a project and making it come together, that hypes me up. 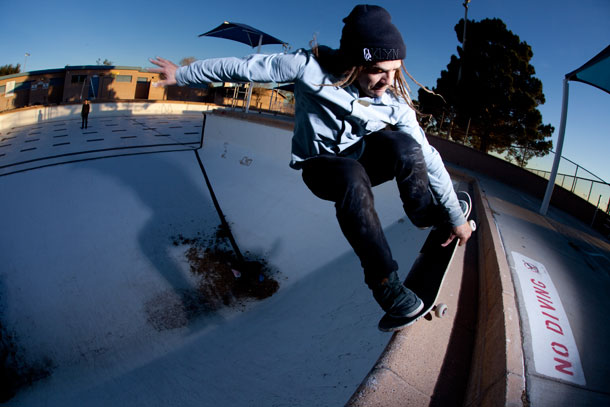 Out in the old Texas town of El Paso, Chad fell in love with this square-pool nose pick. Photo: Garcia

What's the hardest part about skating for you?
Filming video parts in LA.

Are there any crazy or interesting stories with any of the tricks or skate missions while making this video?
That crooked grind on the bump to bar in the hallway was a pretty trippy experience. It was in Guadalajara, Mexico, in the 'hood. As I was trying that trick the bell rang and then all of a sudden the hallway filled up with these little grade-school kids in their uniforms and I could barely walk back to the top. I thought we were done but within five minutes they were all gone. It was a surreal experience. Not to mention there were all these cholos in the neighborhood checking us out with all our camera gear. They saw us skating though and were hyped so we had the pass for the rest of the day. 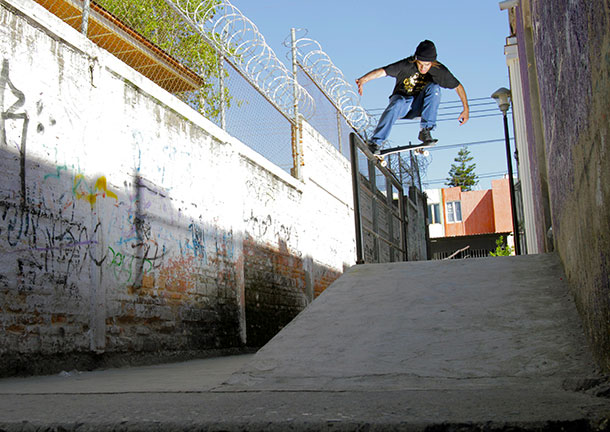 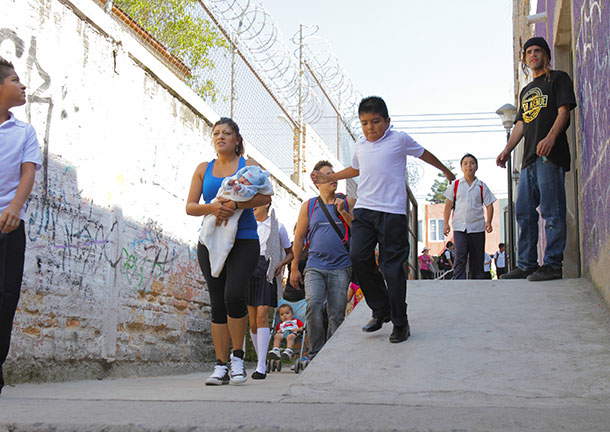 What's the trick that got away?
Tré flip nosebluntslide Hollywood High 12. I need a training facility! Ha ha!

Are you still working in the entertainment business?
Yes I am, from time to time. I'll work on commercials, tv shows, music videos or movies. I skate a lot so its not a full-time thing for me. It definitely hypes me up creatively though when I do work. 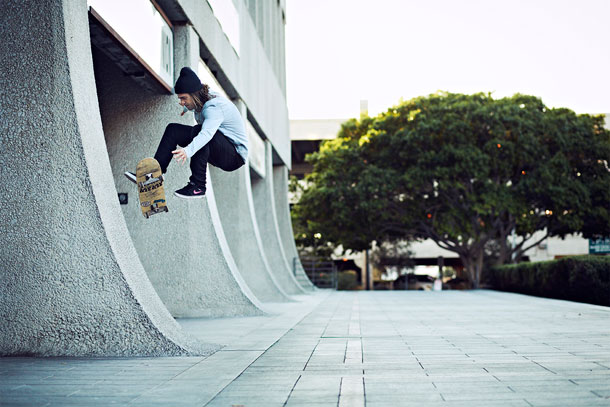 A tré flip fakie Daewon would approve of. Photo: Swainston

Do you regret doing the movie Grind?
I could write a book on this question alone. Let's just say the negatives definitely out weigh the positives. It was twelve years ago so I'll leave it at that.

Having seen the skate biz from the top and the bottom, what lessons have you learned, if any?
Don't give a fuck about what anyone thinks about you.  Easier said than done, but the closer you can get to this point and stay there the better.  Do what you want to do - what makes you happy.  Also don't feel rushed. I felt that in my career so many times from all kinds of people and the reality is that I've been pro for 17 years. 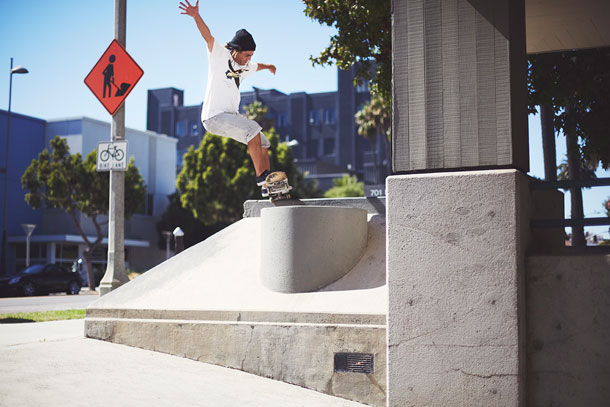 What do you think about Street League?
I'm down for it. If I had the opportunity to enter it I probably would.

Drugs and alcohol fuck up the lives of lots of skaters. What's your thoughts on drugs and alcohol?
The thing about partying is that it's a major distraction. There's nothing wrong with wanting to hang out with the homies and chill, being social is healthy.  Nowadays though if you wanna make it in skating you should be skating at least 4-to-5 hours a day.  Even making it in skating aside, drugs and alcohol are momentum killers. They throw you off track. I know when things get tough and you're thinking "Who cares?! I'm fucked either way so why not just get wasted?" I can speak from experience that you never know what tomorrow can bring. Things can change for the better real quick. Be prepared for that possibility, believe in that possibility and it can be. Then build and grow off of it. Move forward.

How would you describe your haircut?
I don't know but I do know that I feel like shaving my head all the time, especially in the summer. You grow your hair out and it just becomes you, so switching it up can throw you into a major gear crisis. 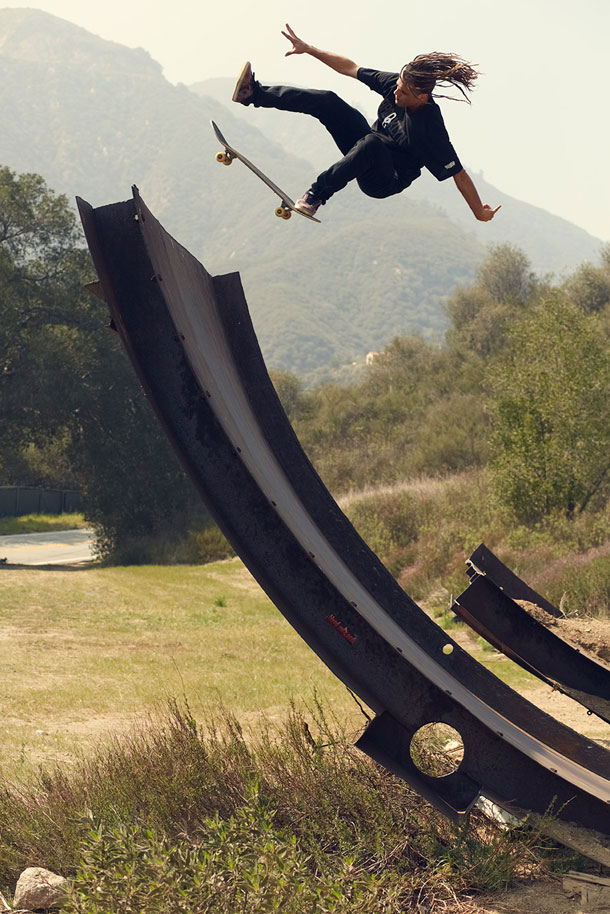 Having been around on the streets for 20-plus years, are there any tricks you may have invented or had a hand in inventing?
Well I can't be in two places at the same time but I thought I was doing rail tricks that had never been done, those NBD's. A lot of combo tricks like switch tre flip lipslides, there's one in "The Storm" video.  That video has a lot of them. A lot of fakie tricks, fakie flip lip. Caveman crooks on rails tripped a lot of people out.

What's been your happiest time in skateboarding?
Mid to late '90s were the best. Pre skate stopper. Street skating was wide open. 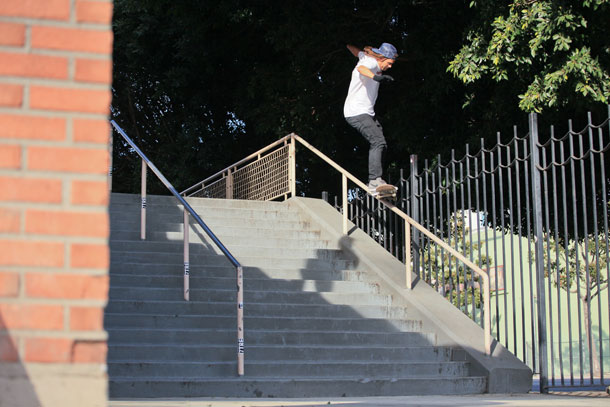 You'd wear gloves too, if you were grinding next to those spikes! Photo: Garcia

What has been your proudest accomplishment?
The fact that I've made it this far for this long with limited resources and funding and I'm still releasing a video part with Thrasher. Who I am today is my proudest accomplishment cause I stuck with skating through thick and thin, rain or shine.  I'm still hungry for more too. Brooklyn Projects video next.

Where do you see yourself in ten years?
I see myself being happy which is most important. I see myself being a positive contributor to the skate community. Organizing events, mentoring younger skaters, running my own businesses, doing Fifth Avenue Skateboards. I want to go back to school and work towards getting a business degree. Skateboarding has taught me a lot about discipline, seeing things through, never giving up, being persistent, etc. I know I can take that knowledge and experience and apply it to anything I want so to me the sky's the limit.