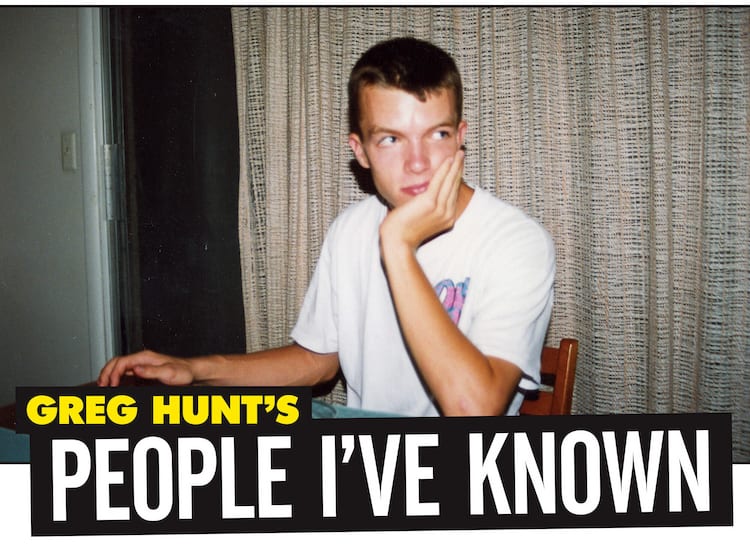 Greg Hunt has a ripping legacy as a pro skater and he transitioned smoothly into one of the most respected videographers out there. And you know he's met characters along the way. 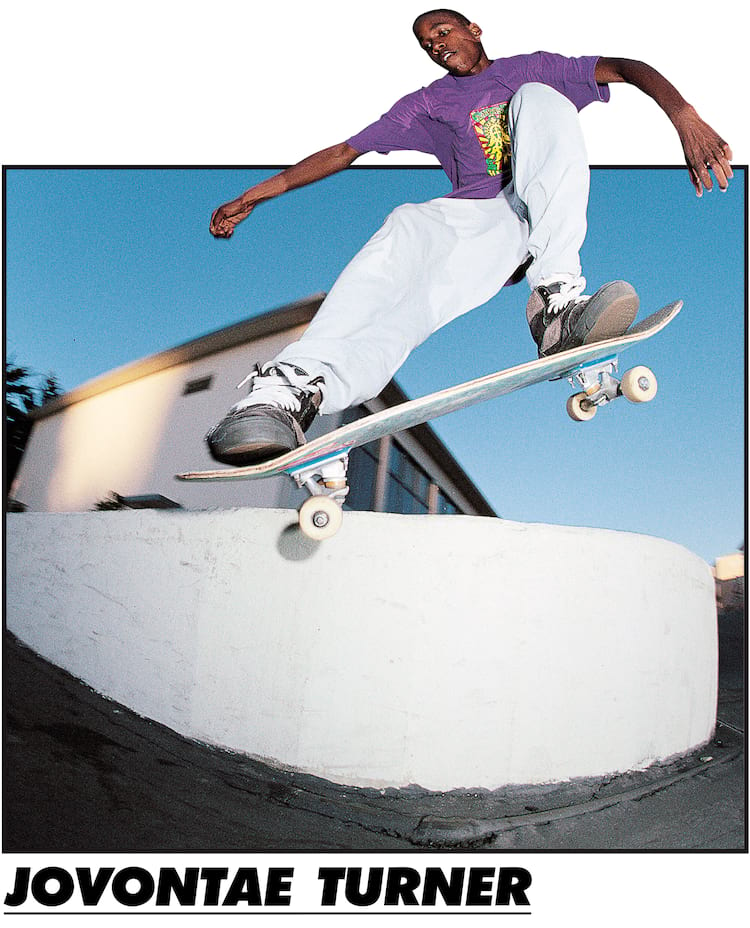 One of my all-time favorite skateboarders, Jovontae was also my supply chain for boards and shoes when I first moved to SF. He would pull up to EMB in a different car each time, then pop the trunk and open shop. I was lucky that we had the same shoe size: 11.5. A few months went by and when I saw him again I was fully sponsored. Jovontae just shook his head and said, “There goes another customer.” 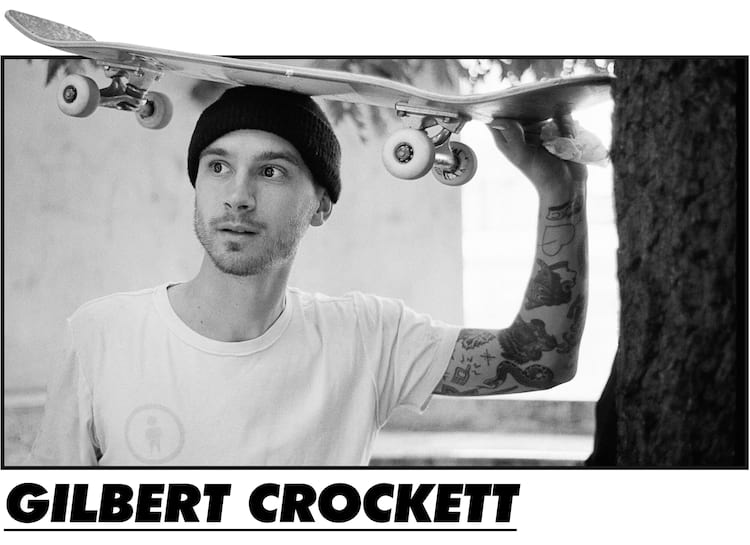 I once went to Gilbert’s mom’s house and on her fridge was a postcard he had sent her years before. He had written her name and address, but the rest was blank. I asked him why he didn’t write a message to her and he said, “Because I didn’t know that’s what you were supposed to do.”

I wish more people knew how good John Deago was. We all had a bad attitude in the 90’s and John was no exception. One time in LA I watched him open a box from Deluxe and throw every single item out of a second-story window. He’d say, “Yeah, really gonna skate this shape!” and out it’d go. After a bit we heard a voice from the street down below, “Hey, you guys aren’t going to skate this stuff?!” It was Paulo Diaz.

In the summer of ’92 I stayed in San Diego with Mark Wyndham and Ocean Howell. Mark was learning how to have out-of-body experiences and at night he would sometimes float around the house. Mark is the sweetest dude and highly intelligent, so I fully believe this.

Kenny told me that one time he traveled back home for a quick visit with his mom and really needed to do laundry so it was the first thing he did. But then his mom needed him to go into town with her, so without any options he just wore her clothes. While they were out he ran into a bunch of friends from high school. 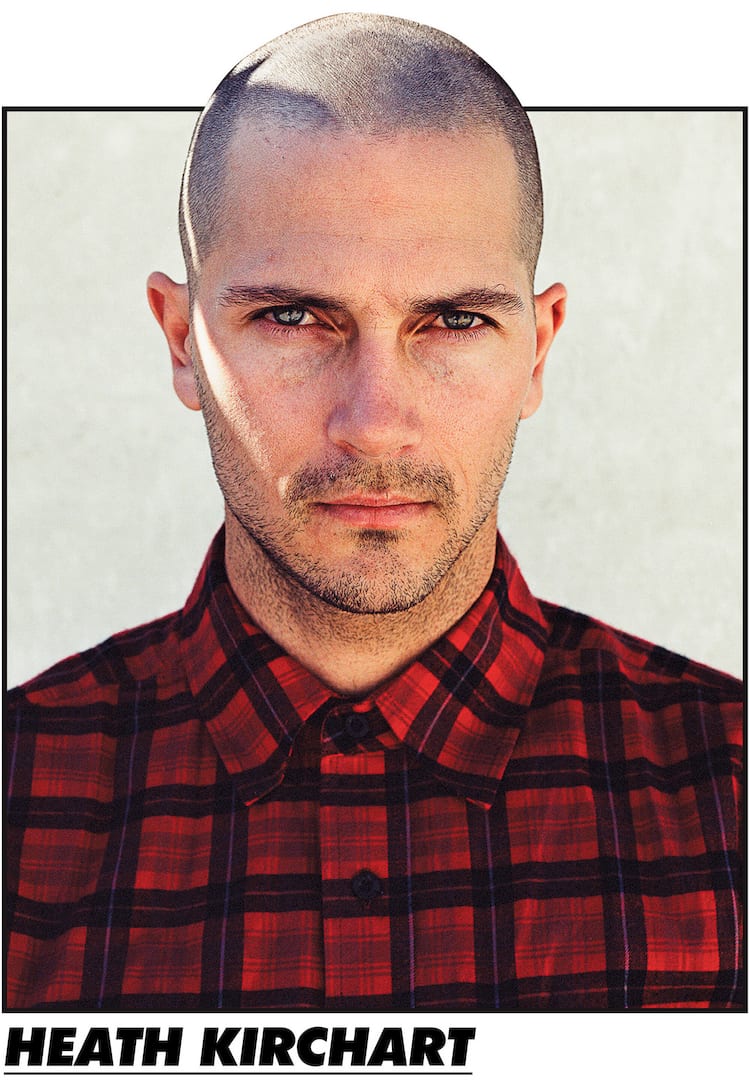 I have too many amazing stories about Heath. Once we got kicked out of a spot early in the day and decided to give it awhile before returning that evening. It was just Heath, Anthony Acosta and myself. At the time Heath was really into hybrid cars, so we ended up at a local Honda dealership. There was a car there that Heath was interested in but he didn’t want to talk to the salesperson so he had Acosta do it for him. Heath would call Acosta with questions like, “What’s the warranty like? Can he do $17,500?” I don’t know what the sales guy thought was happening, but we were hiding up in a parking area spying down on them. Then Heath had Acosta take the car out for a test drive. Watching Acosta drive out of the lot with that sales guy was one of the funniest things. It was just so ridiculous. Upon their return Heath decided that he wanted to buy the car, but there was a problem. Heath called Acosta, “Hey, so my credit card doesn’t have a high enough limit so I want to use Greg’s card too. And I only have my Costco ID.”The sales guy was so over it. I felt mostly bad for Acosta. Maybe it was all for a laugh? I will never know.

My first pro encounter was a Vision parking-lot demo with Jesse Martinez and Kele Rosecrans. It was the summer of 1986 and Jesse had just quit Powell. After the demo I asked him to sign my pink Bones shirt. He crossed out the Bones logo and wrote “THE MESS.” 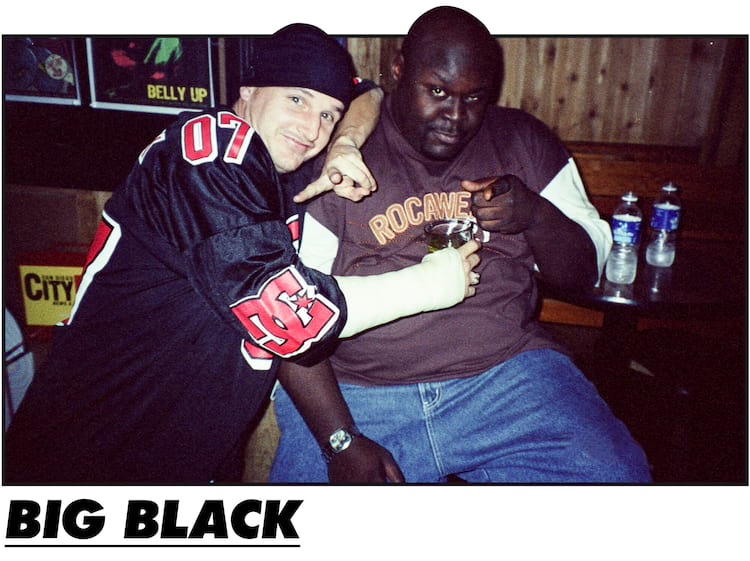 I roomed with Big Black in Tokyo during The DC Video world premiere tour. Our room was tiny and it would wake me up every time he’d roll over because our beds were really close and it was a lot of noise. The bathroom was so small that when he’d sit on the toilet his head would stick out into the hallway, so I’d have to leave to give him privacy. RIP. 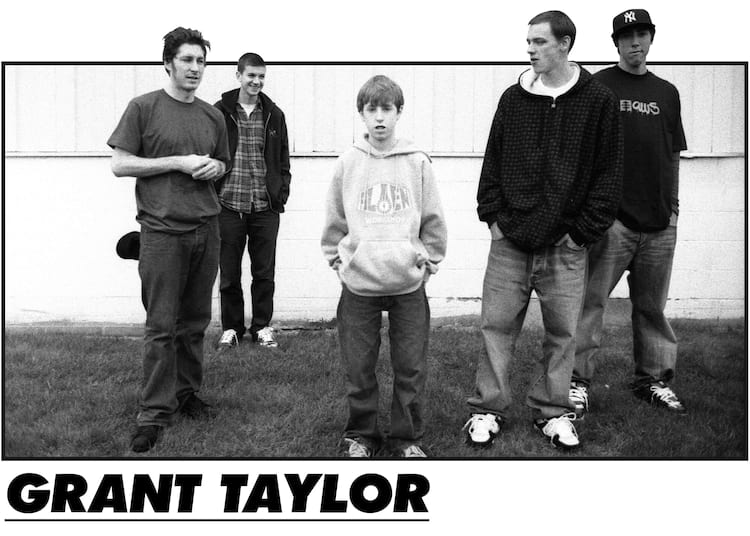 I’ve known Grant since he was maybe 12. On the day we met I had to shoot a team photo for an Alien Workshop ad. Everyone was there. I shot for maybe five minutes and then Grant looked at me dead serious and asked, “Are you out of film yet?” That was the first thing he ever said to me.

Ben was buddies with my friend Goose and he would stop by Ann Arbor occasionally to skate in 1989-1990. Looking back this seems so incredibly random. But on one of these occasions I saw Ben give someone a wedgie on the deck of our local ramp. He literally ripped this guy’s underwear straight out of his pants. I’m not sure if he even knew the guy, but it didn’t look real. I remember it so clearly. 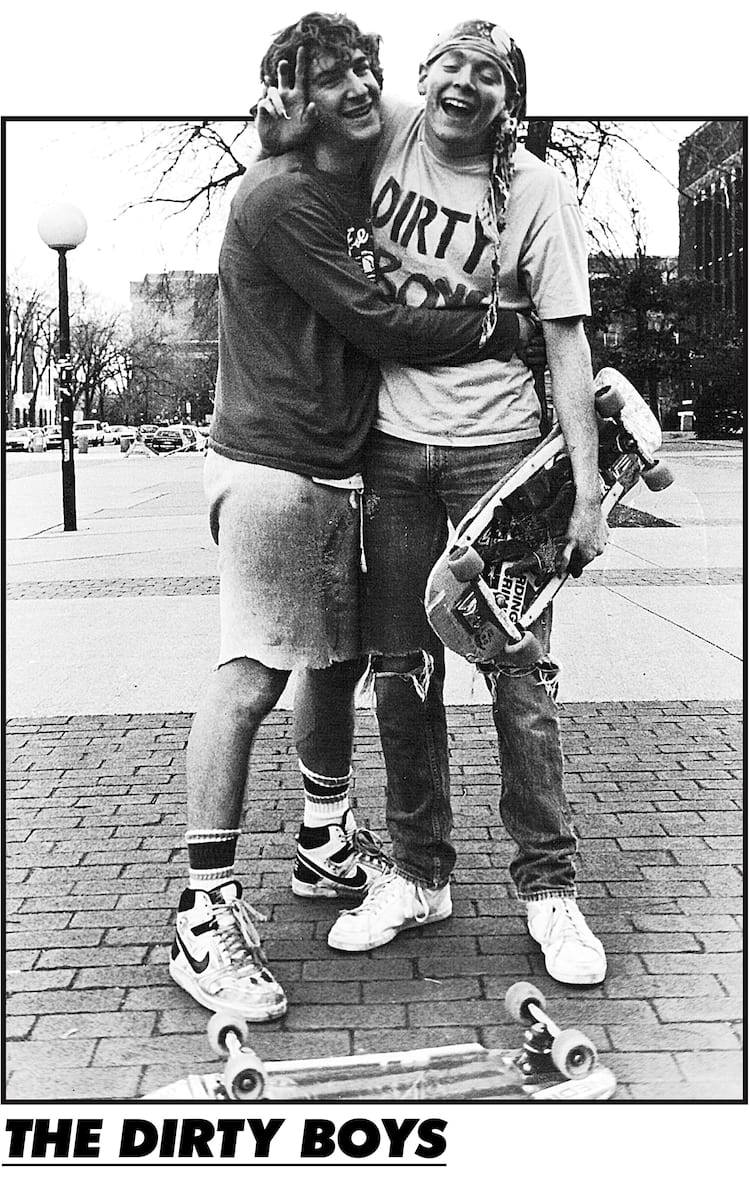 The Dirty Boys were the local heroes in my hometown of Ann Arbor, Michigan. Their actual names were Martin and Trevor. Both ripped insanely hard and wore homemade shirts that said, “PAVE THE WORLD.” They also skated insanely fast—I swear you could hear them coming. I won’t say I knew them because I was terrified of them, but it’s important to have skaters like that in your early life. 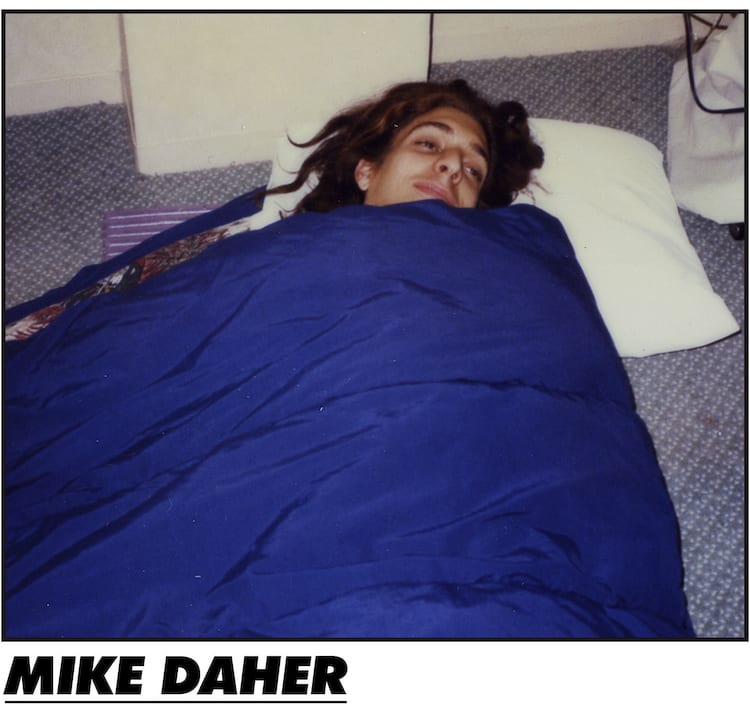 Without a doubt one of the most gifted skaters I’ve ever known. He could do waist-high kickflip melon grabs on a blank deck with no trucks, no grip.

Ty gave me his job at Transworld in 2000. For an introduction he invited me down to the edit bay while he and Jon Holland were cutting Modus. Ty was working on Mike Carroll’s intro and asked if I wanted to sit down and give it a try. I knew nothing about computers and was super intimidated. Ty then said, “Cool, we’re going to get some lunch. Have fun with that!” I managed to edit maybe ten seconds of Mike’s intro by the time they returned and Ty never touched what I’d made. It’s my first edit and a testament to how generous Ty is. 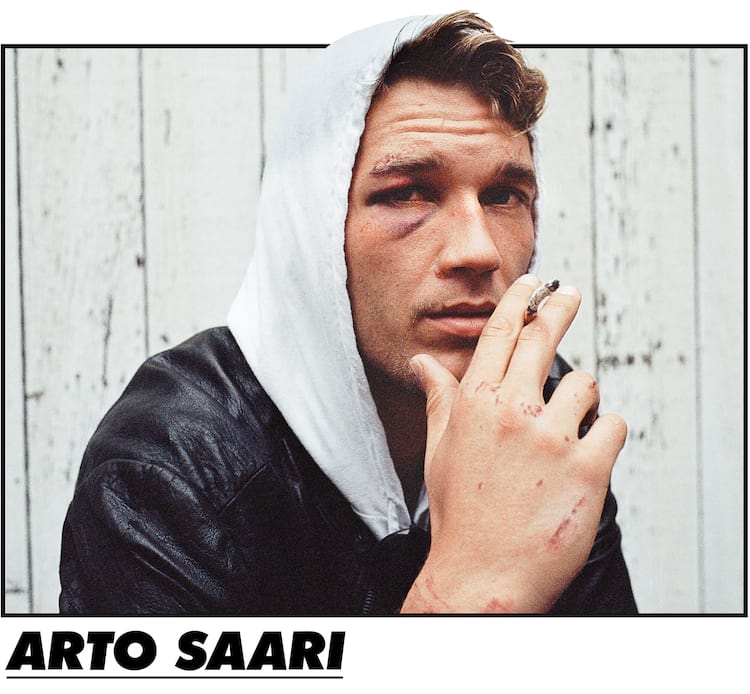 I once went to skate the Willoughby rail with Arto. He wanted to film a kickflip back lip for his Gravis part. When we pulled up Arto got really quiet. “Fuck,” he said. “I already did it.” He realized he’d done it in Menikmati, about ten years earlier.

I remember Jake first coming out to LA with a giant suitcase and some Payless skate shoes. He was so picky about what he filmed and highly opinionated about how skating should look. At the time it seemed pretentious, but it’s clear now that this was his genius. 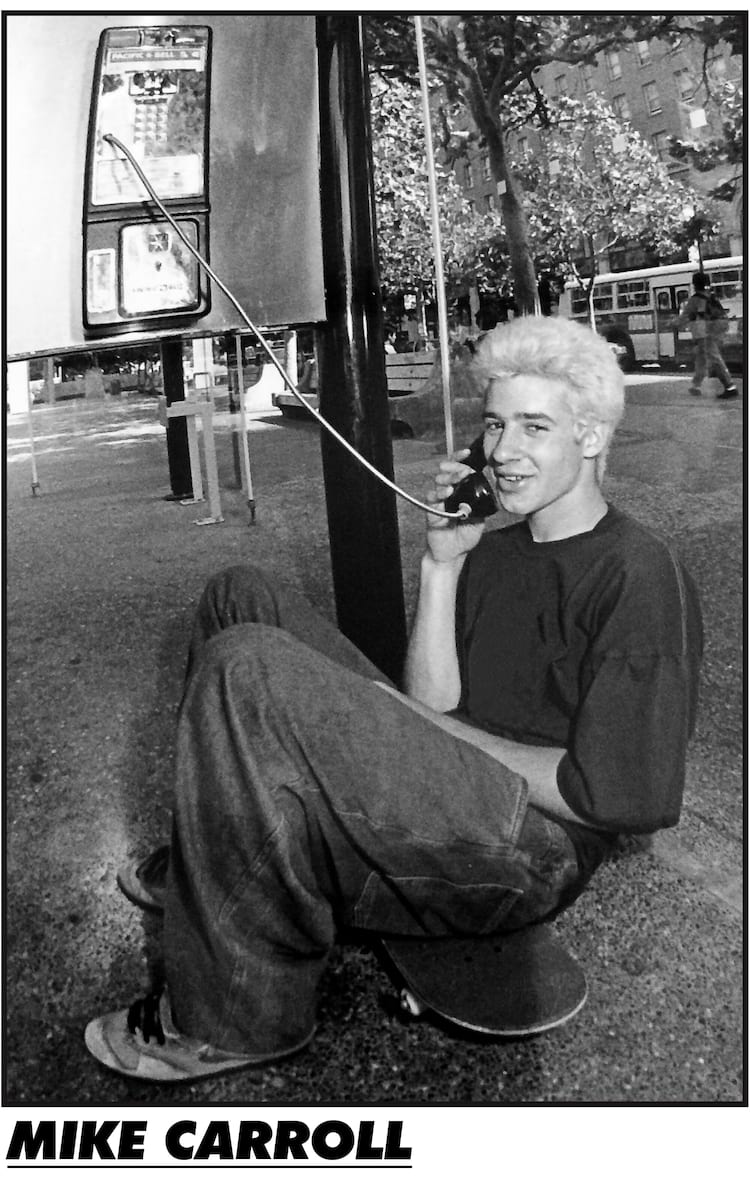 I met Mike in 1991. His brother Greg was the Venture TM and had invited me out to SF. Literally fresh off the plane I skated up to Mike at EMB and said, “You’re Greg, right? I’m staying at your house tonight.” He just stared at me. I’ll never forget that look on Mike’s face. It’s a miracle I didn’t get banned.

I think I actually didn’t get banned because of James. He always had my back. On one of my first road trips James bought me dinner and said, “Pay me back when you blow up!” 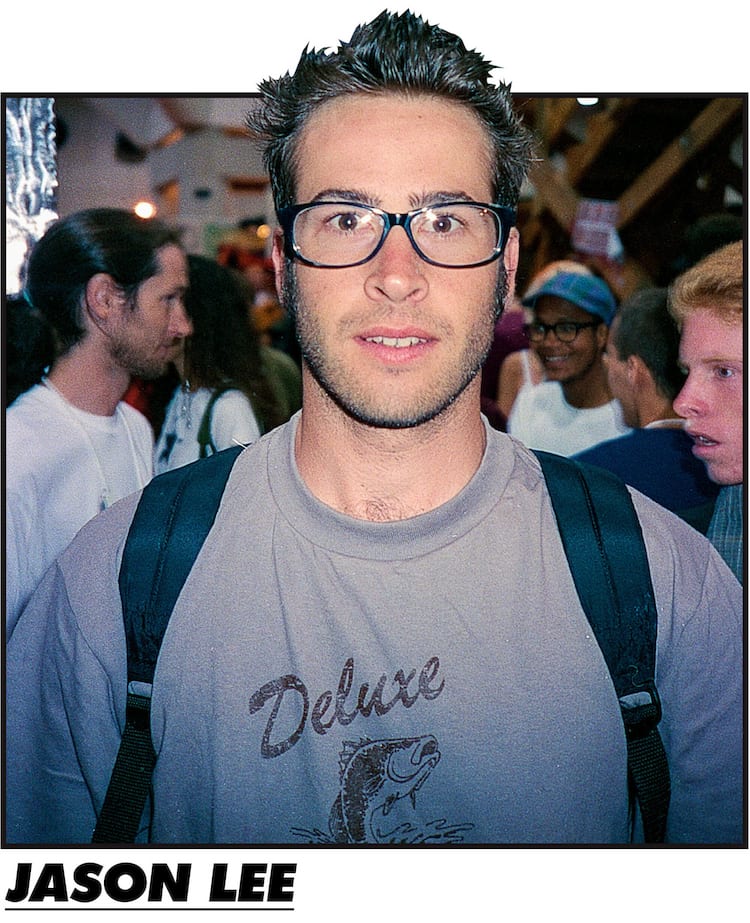 Once we were skating a parking garage in San Francisco that had this tiny hip. Above it were some low-hanging pipes and when trying a backslide flip Jason hit his head pretty hard. He was so afraid that he was going to get amnesia that he kept saying his name over and over, “Jason Lee. Jason Lee. Jason Lee.” 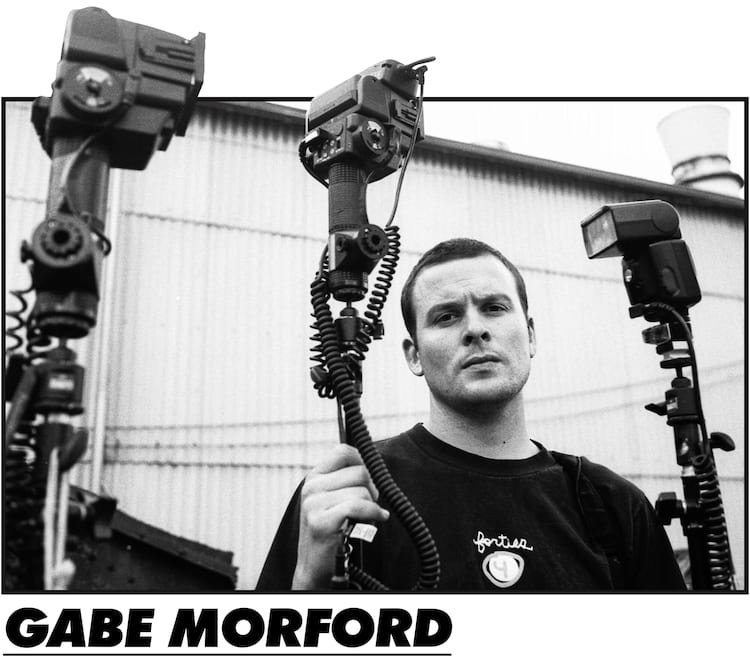 I was roommates with Gabe and remember coming home one rainy afternoon and the entire living room was covered in knots. Every table leg and drawer handle had a little piece of rope tied around it. Turns out Gabe had spent the day learning to tie new knots. He was an Eagle Scout in high school.

I know Caswell a little from over the years. One time I was walking through an airport on a layover and spotted him walking towards me. Caswell saw me, too, but we just walked right by each other and didn’t say anything—not even a nod. It wasn’t a bad vibe, we just weren’t in the mood. But I always thought that was pretty cool. Years later when I saw him again he said he thought it was cool, too. 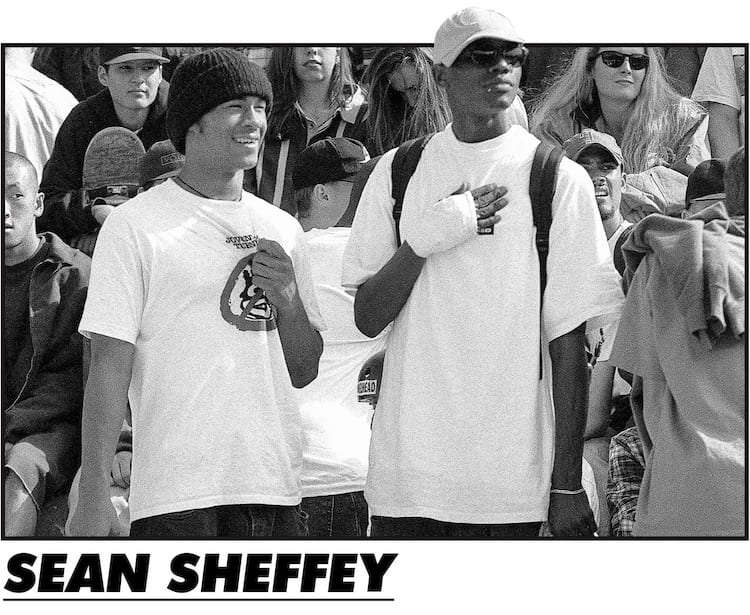 I drove round trip from Michigan to California with Sheffey when I was 16. My buddy Goose had met him at a demo just weeks before. Sean hardly knew us, but on the drive out he said, “Whatever happens out there, I have your back. If you guys have nowhere to stay I’ll sleep in the car with you.” We never had to sleep in the car, but I did get kicked out of skate camp so Sean took me to Natas’ house for the weekend. I don’t think I ever properly said thank you to him for everything. So thank you, Sheff, you changed my life.

After finishing Propeller Steve surprised my family and I with a trip to Hawaii as a thank you. He didn’t have to do that, but the video meant so much to him. I’ll be forever grateful for that gesture. 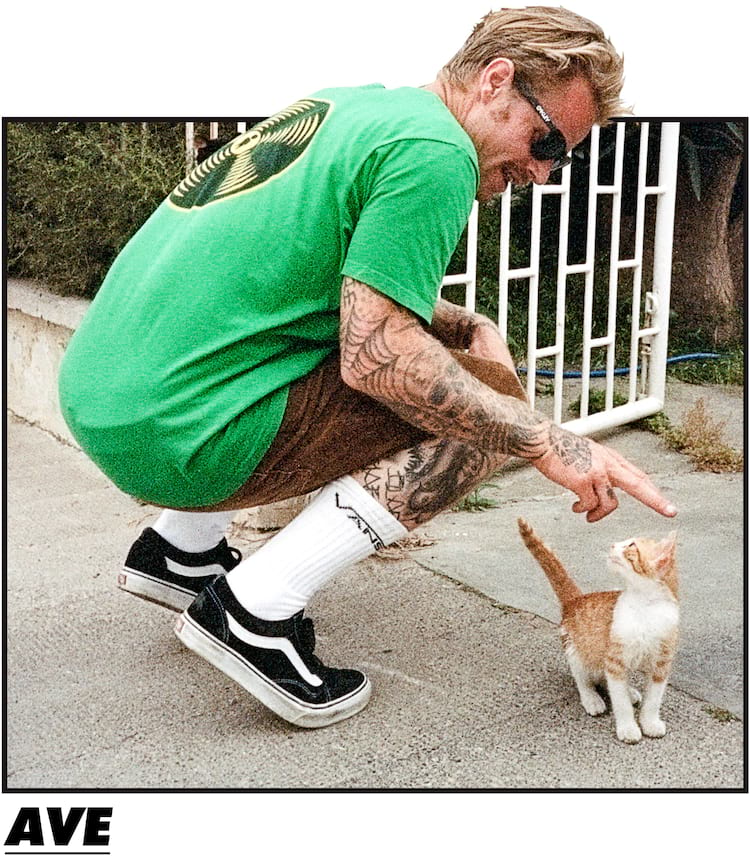 Anthony is such an inspiration to me on so many levels, but he is also one of the funniest people I’ve ever known. I feel like only his friends know this? Or maybe he’s mellower now. But to this day I have never seen anyone get so delirious 12 hours into a road trip.