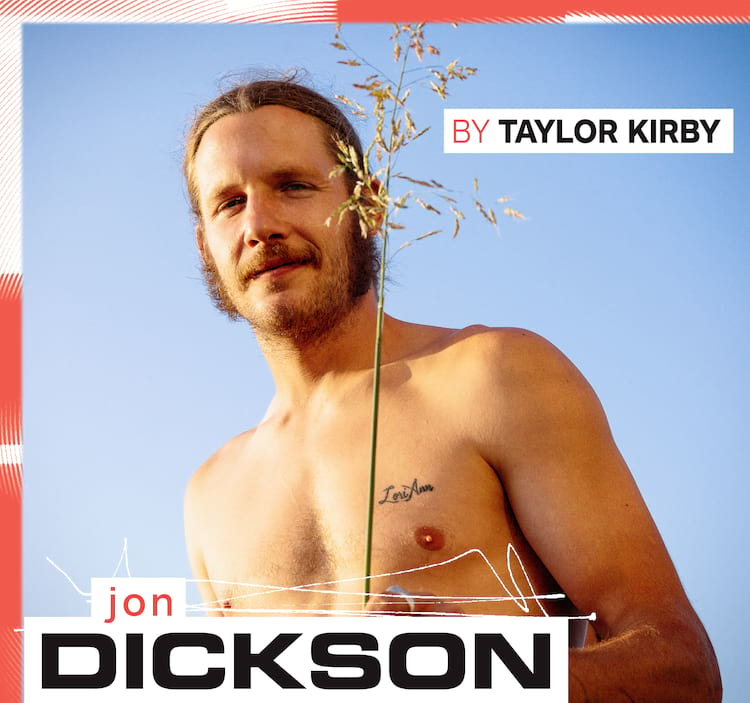 Dickson is a true original. He’s true to himself. He ain’t cashing in on trends or worrying about the Internet. The guy has mastered the art of street skateboarding and, lucky us, we get to watch. So enjoy a few words I had with Ol’ Dicks, then catch his closing part in Emerica’s Green.

Where you at right now?

Just kickin’ it at my house.

For those who don’t know, where is your house?

You been going to Cherry Park lately?

I went there once last week and I haven’t been there since. I don’t go there too much anymore. 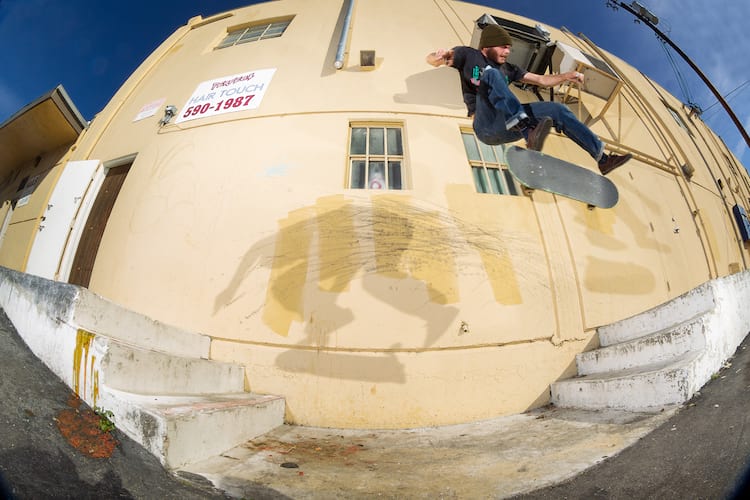 Is it a weird scene down there nowadays?

Nah, it’s a good scene, in the morning at least. Not many people there.

You miss the old Cherry?

I do. I think the old park was sicker but the new one’s fun, too.

I miss the old park, too. How long you been living in the LBC now?

Shit, dude, is it seven years?

And where were you before that?

How long was that run?

JT told me you couldn’t find your house on Loretta after living there for a year.

You miss the O-side, huh?

Hell yeah! I love the O!

It’ll always be there. 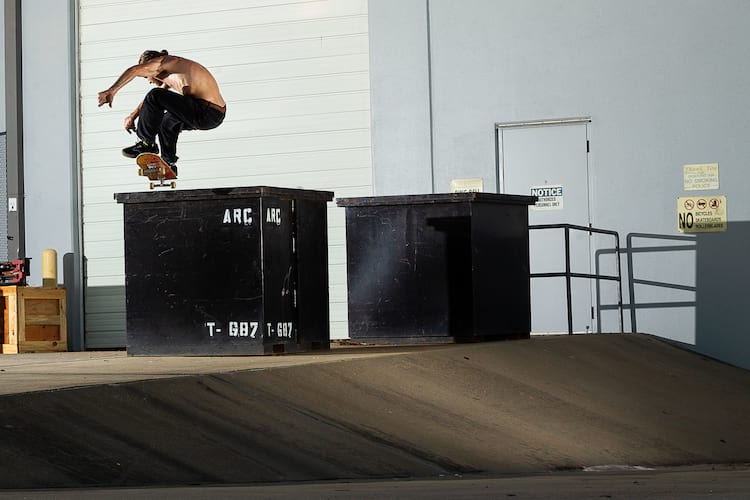 O-side will always be there. In the meantime, Jon takes care of some kickflip noseslide related business in Houston

You think you’ll ever move somewhere besides back home?

I don’t know. I could go back South. Only time will tell.

You’d never move to LA, huh? We could use you up here, you know?

What’s too much about it?

There’s just too much going on—too many cars, too many people.

I get it; everyone’s different.

I go visit there, though.

You do not come to LA.

Same ol’. Been working on this little Emerica project lately.

Little?! You got a signature shoe coming out, right?

Well, yeah, and a video part to go with it.

What’d you have in mind when designing a pro shoe? I feel like most skaters design their shoe based on what they’ve already been skating.

Yeah, I love the Wino G6 so I based it a little off that and just made some changes to make the shoe as durable as possible. 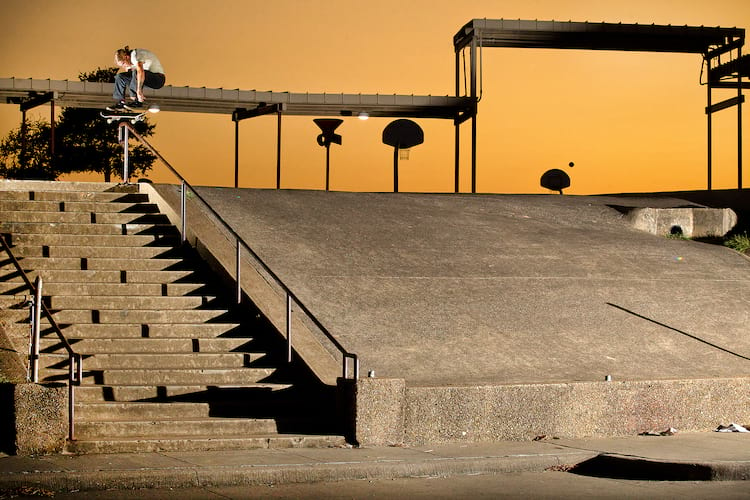 Steers and cheers. Fakie flip in Ft. Worth

Are you stoked on Deathwish right now, like where it’s at?

Yeah, I think everyone is killin’ it! We got a good group of dudes out there rippin’ it all the time.

Agreed. Is there something in the works for Deathwish in the near future we should know about?

I guess we’ll see. Forgive me for going here but it’s one of my favorite stories ever—what was it like the first time you literally ever stepped on a skateboard?

I broke my leg.

Not doing a trick, right?

Yeah, literally the first interaction with my foot on a board. The board just took off before my back foot was on and I sat on my leg all crazy. I snapped it. 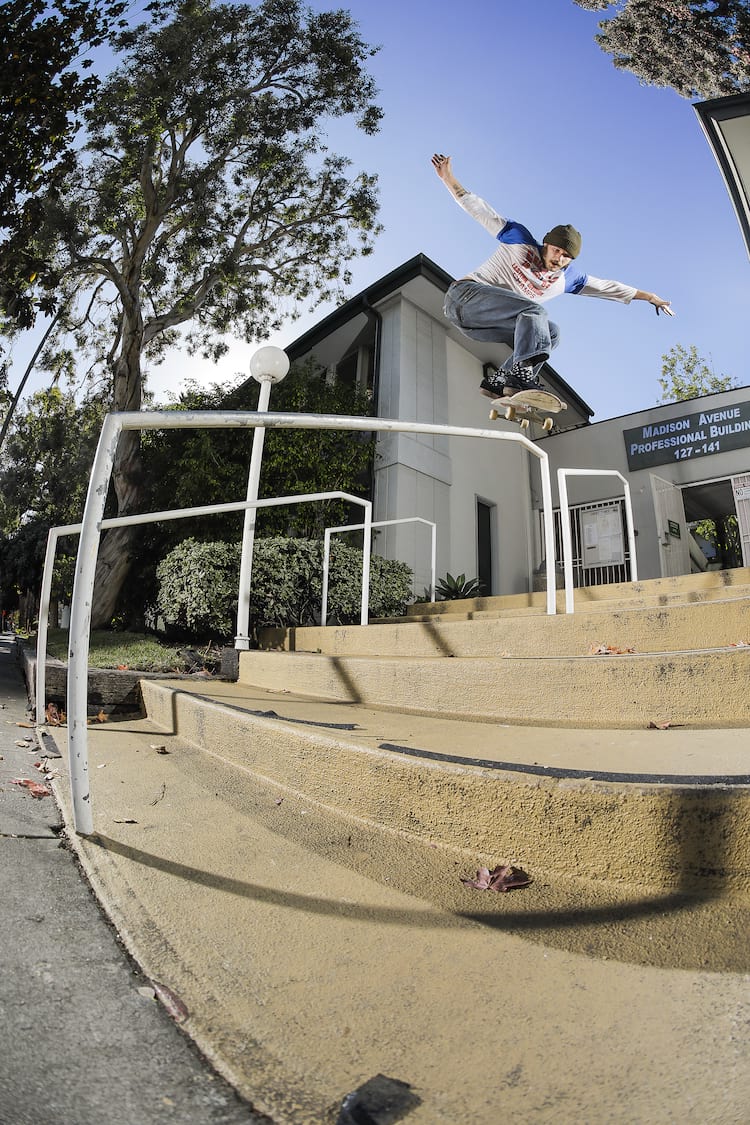 When you break your leg first time on a board, it can only get better from there. Gap back lip     Photo: Atiba

How old were you?

You must have weighed a good amount to snap your shit from ground level under the age of ten. Sorry, I didn’t mean that.
Baby-fat break.

So your folks took your board away after that?

It wasn’t even mine. It was my neighbor’s.

How’d you get your own first board?

My sister got one for me from her friend. I’d skate our patch of cement in the backyard when the folks were gone. I’d hear ’em coming down the driveway and run to my room, chuck it under the bed.

How did you get to the point of skating being cool with your parents?

I think I was bugging my dad about getting a board for a while. I remember being at my dad’s friend’s house when my pops finally said, “You know what? If you can walk down the driveway on your hands, we’ll get you a board.” I guess I was pretty good at walking on my hands then.

Is there a skate scene in Antioch, Illinois, nowadays?

I don’t think so. There might even be a scooter store there now. Last couple times I went back home there’s been gangs of scooter kids cruising town. 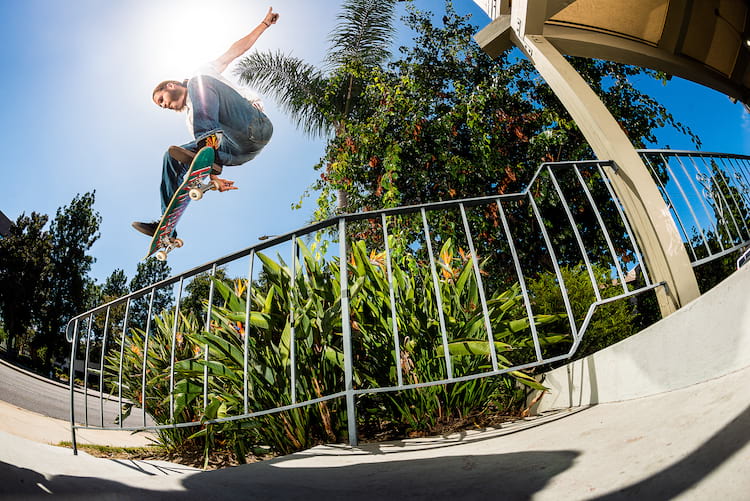 Escaping the Antioch scooter gangs with a kickflip crooks in California     Photo: Seidler

They’re mobbin’ through town just like we used to on our boards as little kids.

No skaters to be seen?

I gotta get back to the farm with you and the family. I remember waking up at seven AM to your pops on the phone with the cops. He was tellin’ them that we were gonna be shooting guns in an hour—classic Dickson farm.
Fun stuff.

You must be pretty good at fishing, yeah?

Tell us about that.

You just walk out onto the lake with your shack.

Wait, what’s a shack for those of us who don’t go ice fishing?

You know, just a shack. It usually fits about two people and there’s a hole of some sort in it. You just drill a hole through the ice and fish from inside the shack because it gets pretty damn cold out. People keep their shacks out there all season long ’til the ice starts melting. You’ll see little communities of ’em out there. It’s pretty much just an excuse to get hammered.

Amazing. Let’s change it up—who’s getting you hyped to skate these days?

I’ve been watching a lot of snowboarding videos.

Got a favorite snowboarder?

Nah, I don’t know their names.

Okay, so snowboarders are the source of stoke. What is the worst thing happening in skateboarding right now? What’s the anti-stoke?

I think skateboarding is amazing—in every way.

No purple camo pants or careful hands getting under your skin?

Nope. All of that is cool. 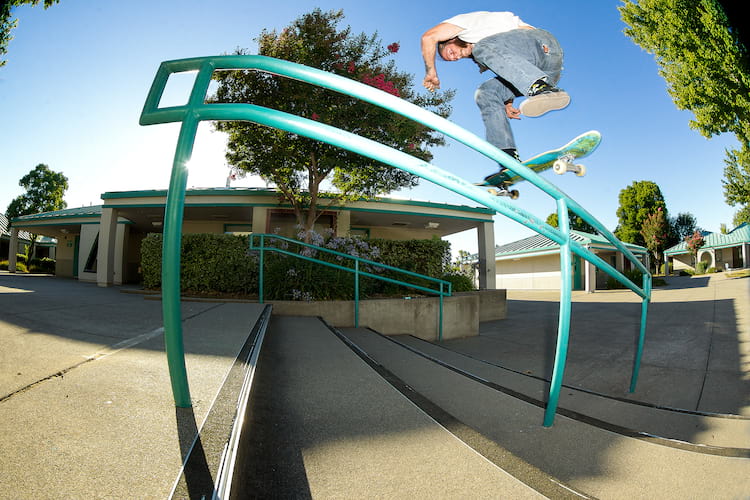 You’re a nice guy these days.

I guess on a serious note, I feel like there’s no anticipation for videos anymore. Back in the day they’d come out in hard copy DVD or VHS even. Now, there’s just so much content on the web, everything is for the web, so I guess that’s a bummer. Awesome shit can just get forgotten about so fast. It’s there one day, gone the next.

For real. I feel like the concept of a full-length is weird to kids.

Yeah, or they’ll just release a full-length part by part, when the whole video is meant to be viewed as one piece.

I remember seeing ads in magazines hyping up a video for over a year before it came out!

I know! Then the video comes out and one homie would get it. Everyone would go link up at their house just to watch it.

Yup, or the skateshop would run it up on the shop TV.

Now everyone just does it by themselves on their phone.

So are you in the Olympics?

Nah, I’ve been trying, though.

I know a guy who could get you in. No smokin’ weed, though. They drug test. 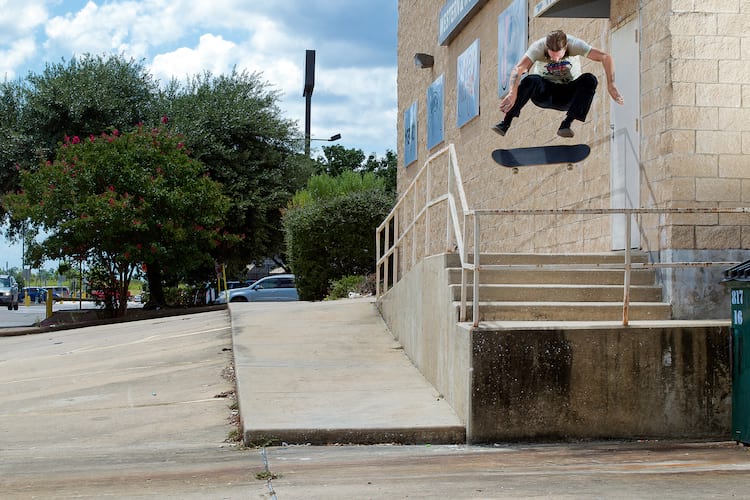