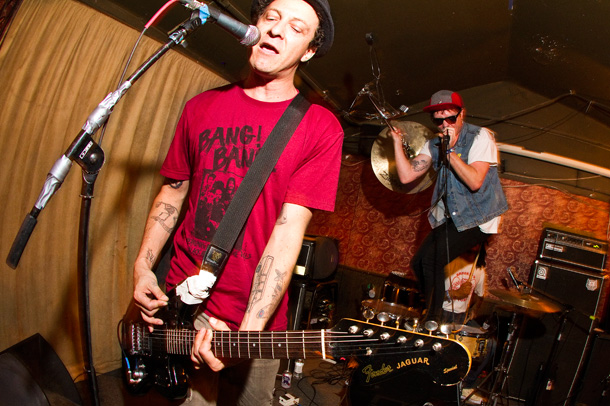 "All these girls in swimsuits, just looking at him in disgust"

It was quite a treat to have spazz masters Johnny, Dan and Jahphet grace the Death Match with their bouncing off the wall, feel-good, slap-slap-slap-pound-up-down-snap Death Set. Plus: to meet punkers who are into weird dance music I’ve never heard of? I’m with that.

You guys skate. What have your best tricks been?
Johnny Siera: Definitely a fakie heel from bank-to-bank on the Gold Coast.
Dan Walker: I was never a technical skater; I just liked going fast and ollieing gaps and stairs. The biggest was a nine, which for me was a big thing.
Johnny: Our homies Cerebral Ballzy,  it’s so much fun hanging out with those dudes. They skate anytime!
Dan: The last time I had a skate with the Cerebral Ballzy kids, I met up with them over in London and we went to Finsbury skatepark. It was the first time  I had a skate in ages—it was fun as shit.

What’s a good Beau Velasco story?
Johnny Siera: He ate all this chili, and he was driving his van around, and he shit himself. Instead of stopping, he just kept shitting himself all over his car. He decided to go to the beach to wash off. He was walking down Gold Coast—it’s like Miami, all these girls in swimsuits, just looking at him in disgust. So he washes off, then goes back to his girlfriend’s house with flakes still on his legs. She was like, “You’re a fucking child!” He started laughing. It’s a grotty story, but just he didn’t give a fuck! More importantly, he was a catalyst for people starting so many different things: From bands to tattoo and jewelry design to art.

Is Beau the one who did your album art?
Johnny: He did the first two EPs. The guy who does all our art is Nolan Strals, from this punk band in Baltimore called Double Dagger. He’s fucking next level; really good.

Who did the one for Worldwide?
Johnny: That was Nolan. With the screaming font head. He’s pretty much been on board since the second EP. He’s a beast; he got a Time magazine cover, which is really crazy because he’s a poster artist.

Who puts together the interludes?
Johnny: We all do. It’s music that we’re stoked on; usually punk, hip-hop, and grimy electronic stuff.

What’s some of your favorite electronic stuff to listen to?
Dan: When these guys first left Australia  and moved over to The States, I was working with Beau; we were DJing and living in the UK. We caught up with these kids on a couple of tours, but yeah, I still DJ under a couple aliases doing club stuff. One of them is called NineLives The Cat, which actually turned into more of an MC project. I started doing live shows in New York, which has been super fun. The other one is called  Zap! Pow! Die!, which is grindy bassline  sort of stuff.
Johnny: We’ve got our fingers in a bunch of little pies. We started a new dance thing called post raucous rap. It’s medium-tempo, real grindy dance music. We’re really stoked on this new thing called moombahton. Our homie Dave Nada essentially invented this style of music. It’s like slowed-down Dutch house with a reggaeton influence. We’re stoked on this sort of weird stuff. But yeah, we work on remixes and keep busy, trying  to pay rent. Party a lot. Fuck it! I’m not  going to lie!