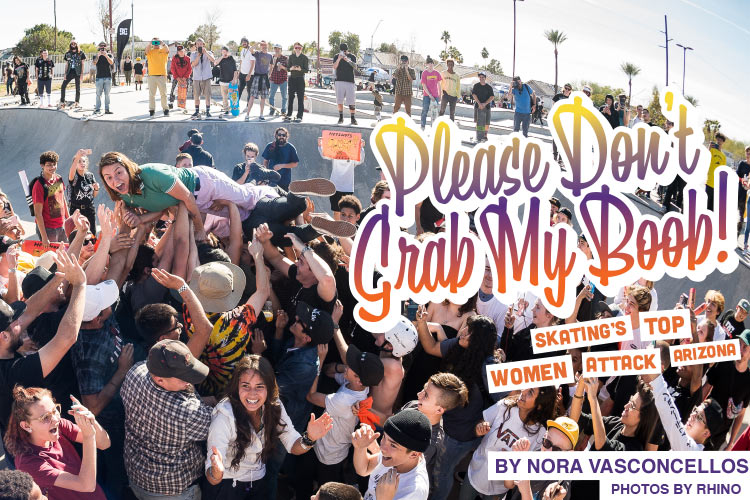 Only one thought flashed through my mind before jumping into the screaming pit of teenage boys: Please don’t grab my boob! And I must say, I was extremely impressed with the young men’s behavior. Lizzie and I were even gently placed back on the ground after the crowd surfing ceased—no groping involved. I think they are getting it, all these kids. The men, too. I mean, check it out: I’m writing about an all-ladies skate trip! We’re really doing it! 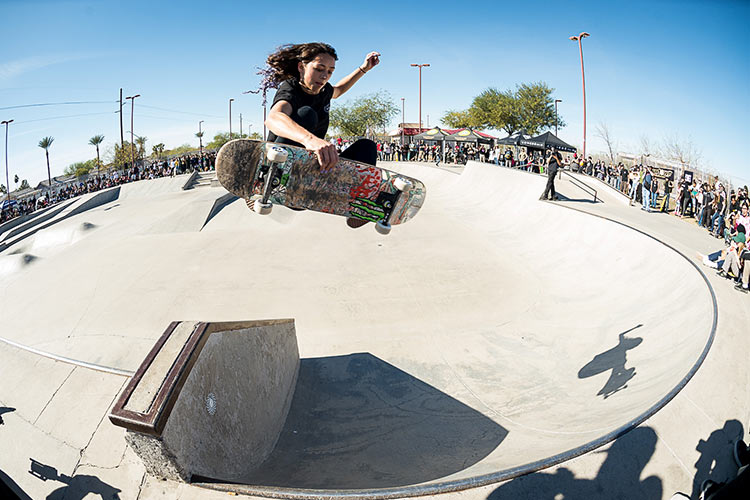 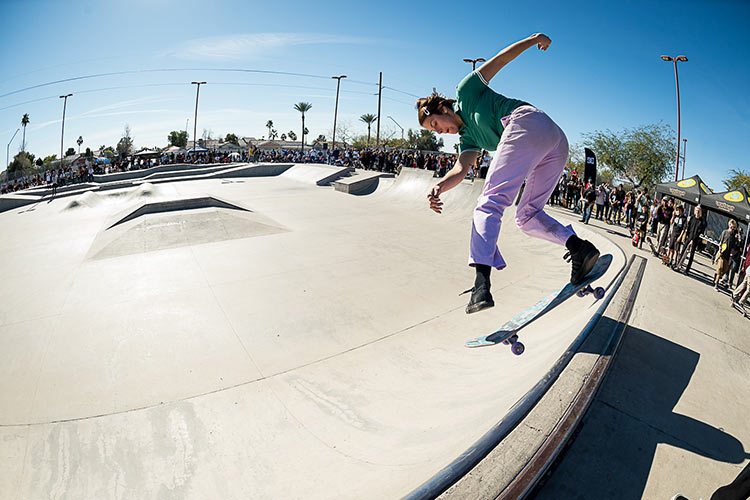 Nora, kickflip backside disaster—put on your purple pants and dance! 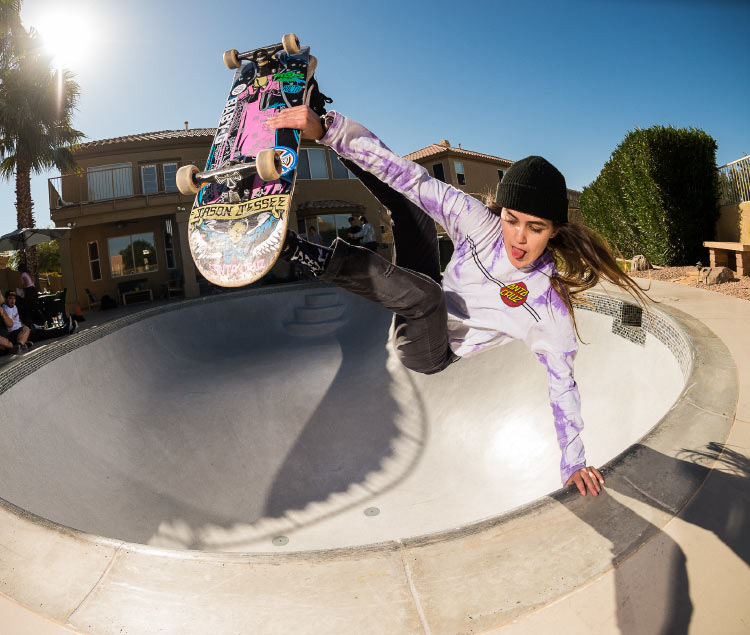 If you grow up skating with Pedro Barros, you’re gonna be right at home in a backyard pit—Yndiara Asp, layback air, RTMF approved 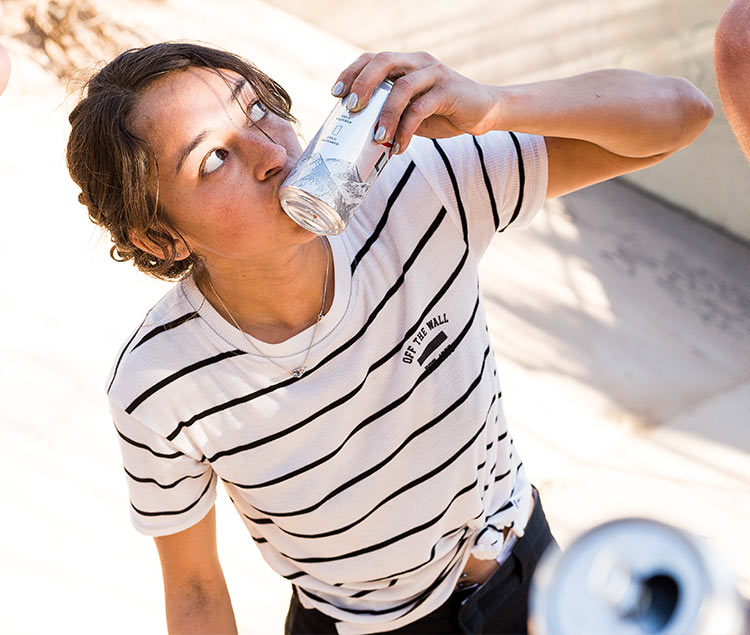 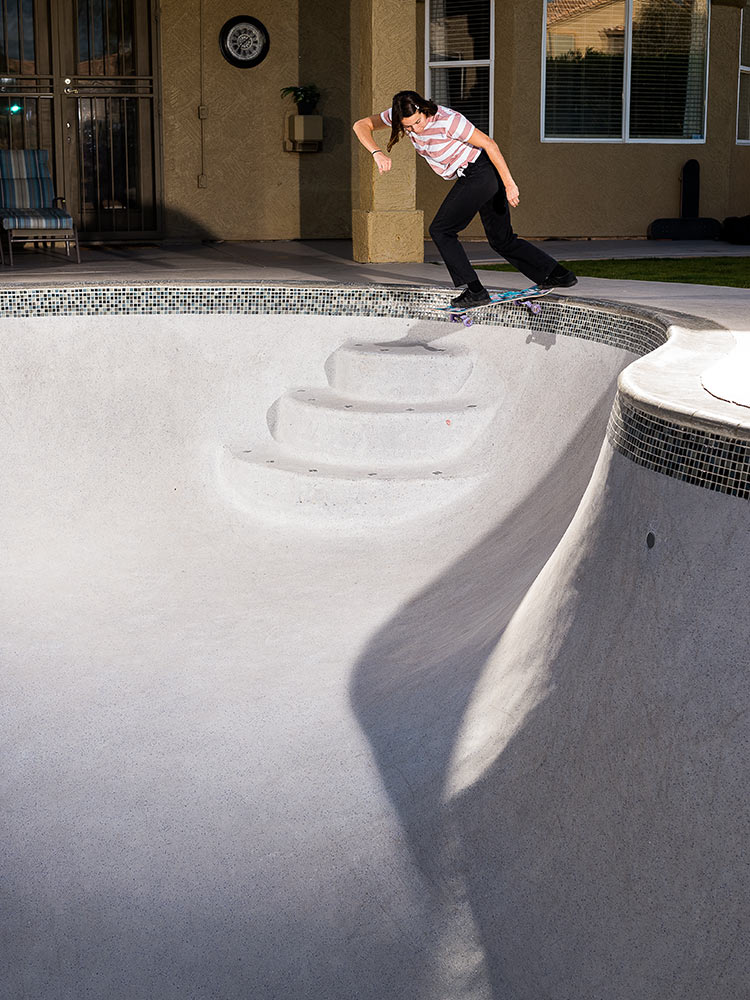 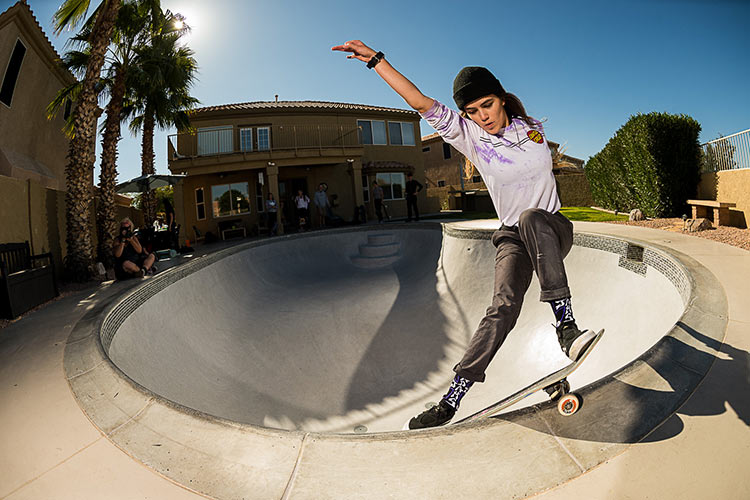 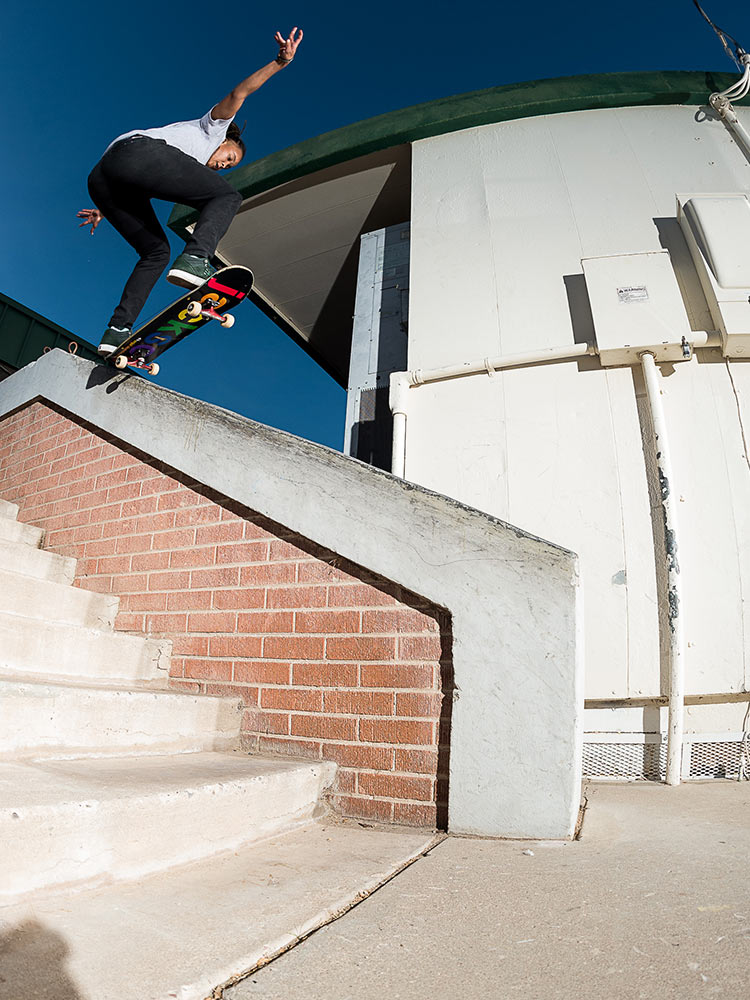 She’ll skate it all but she shines on the streets. Lacey fired up the generator for a half Cab nose manual to nollie varial heel in Tucson. No Baker Maker here 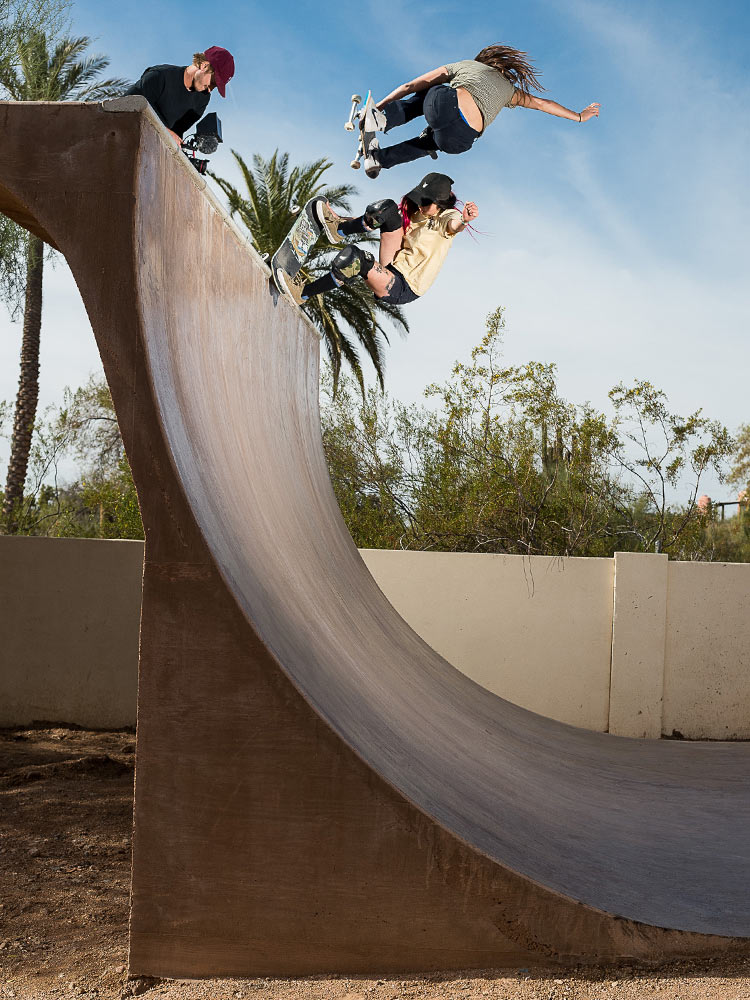 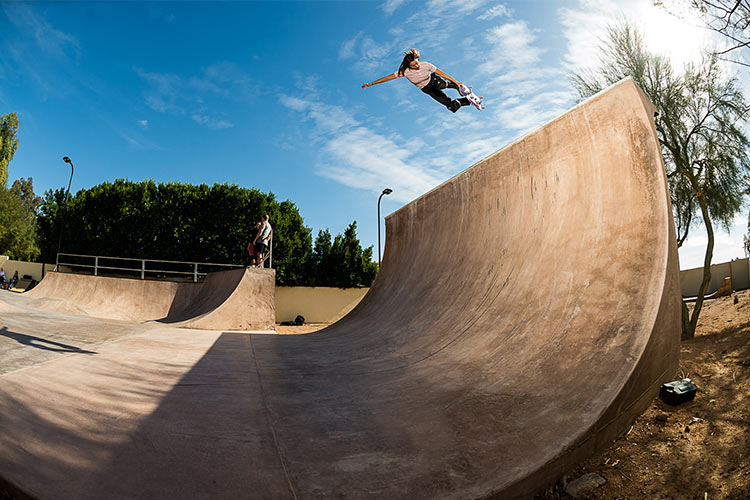 Nora, picture-perfect backside air. It's all in the scoop 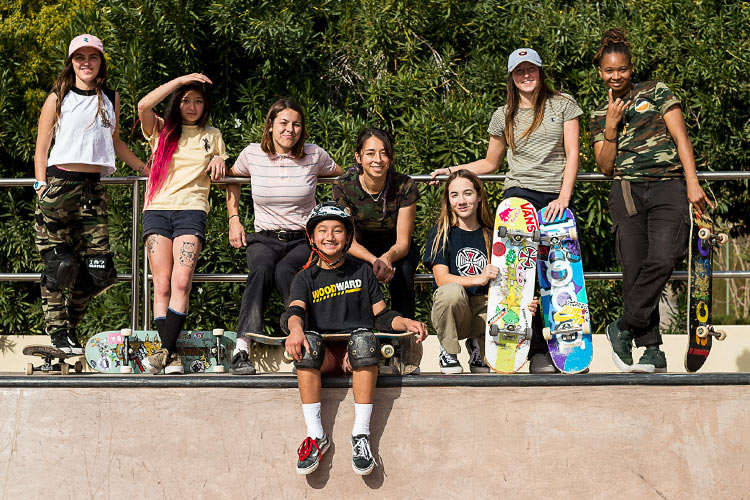 What if this was your backyard? 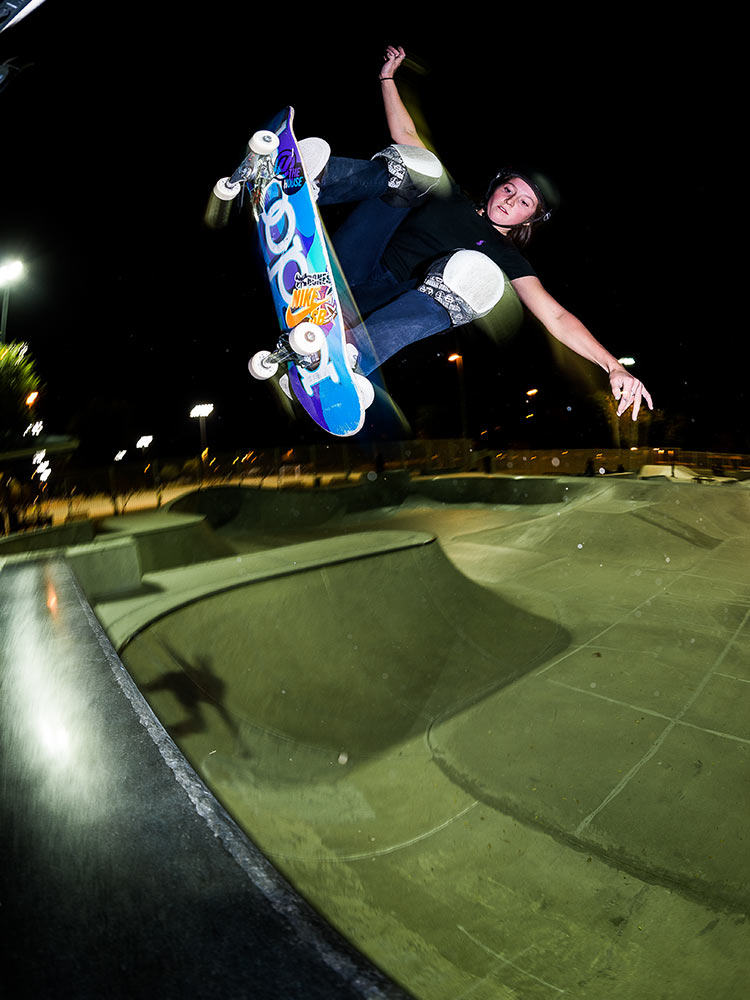 Nicole Hause had never done an ollie to fakie before this one. With $100 on the line, she reeled it in like a pro. Pay up, Nora 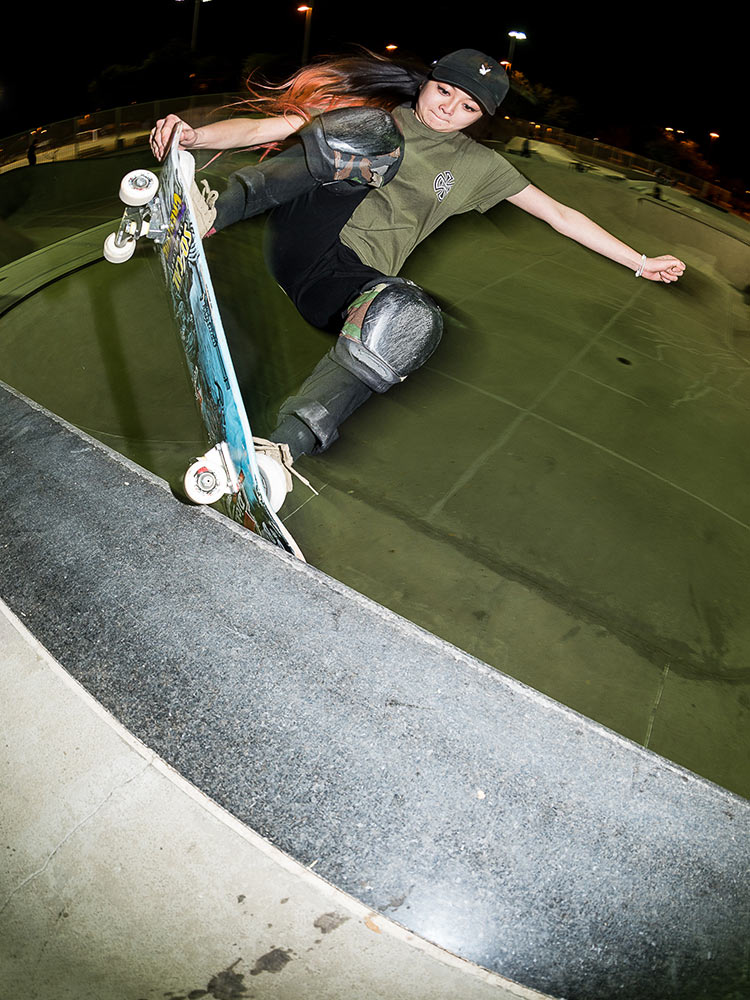 Phoenix was a pretty wild spot to kick off the trip. We stopped at the Union Hills skatepark where a local contest was being held, and Cowtown (thank you, Trent!) asked us to swing through and do a demo. Straight out the gate we were greeted by a full crowd. It really does mean the world to have someone come up and ask you to sign the pro-model board (of yours!) that they just bought. As with most skateboarding events, there were a wide variety of people in attendance: young boys, girls, older guys, grandmothers—some wanted to talk about how you’ve encouraged them to get on a board. Others wanted to let you know that they were skipping work to meet you. I received bundles of fan art and short stories and after the demo another huge line formed for signatures and greetings. It was so awesome. The energy of the day was infectious and it really lit a fire for the rest of the trip. 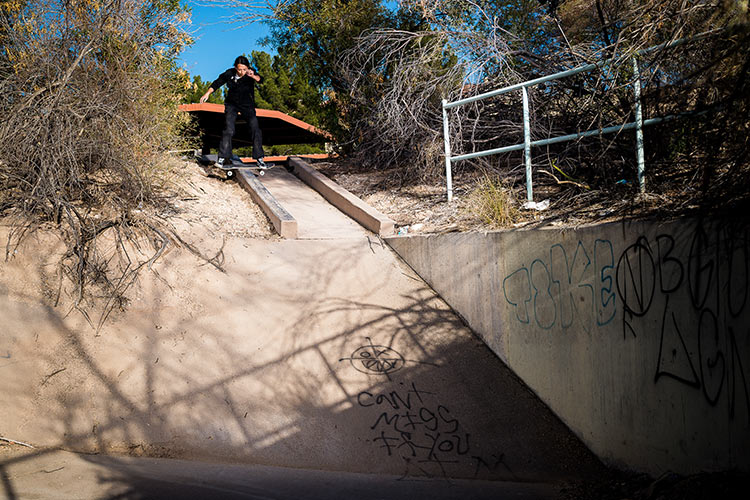 Lizzie had no interest in most of the street spots we hit—until she spied this lipslide into the ditch. Technically, curbs have vert on them…

Brighton Zeuner grew up in Arizona and was psyched to point out landmarks through the window of the van. “Oh! I remember that place! I ate there with my parents!” she proudly burst out, pointing at a Denny’s in Mesa, AZ. Ah, to be young again. Turns out, we probably should have stopped in for a Grand Slam, because we’re pretty sure Brighton got food poisoning from the Whole Foods’ sushi she ate later that day. She was bestowed the honor of christening the new NHS skate van with its first barf. I’m sure there will be more to come, though. But other than her ejected California rolls, we kept the ride pretty clean. We’re ladies, after all, and we sure as hell know how to clean up after ourselves. Even if that means scraping raw-fish barf off the carpet. 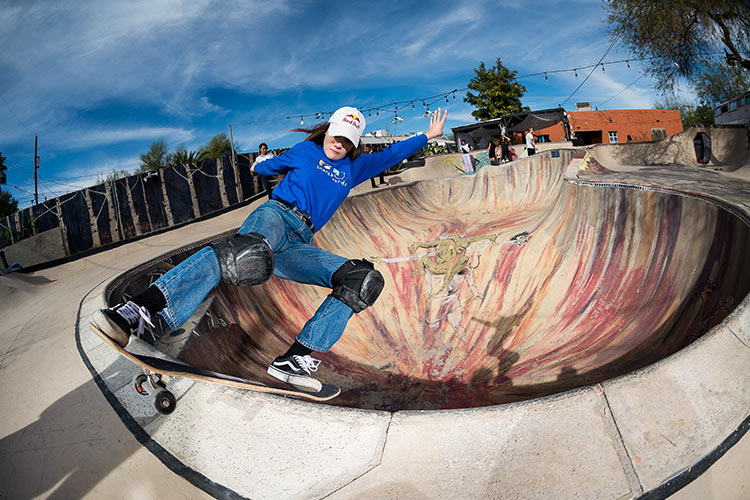 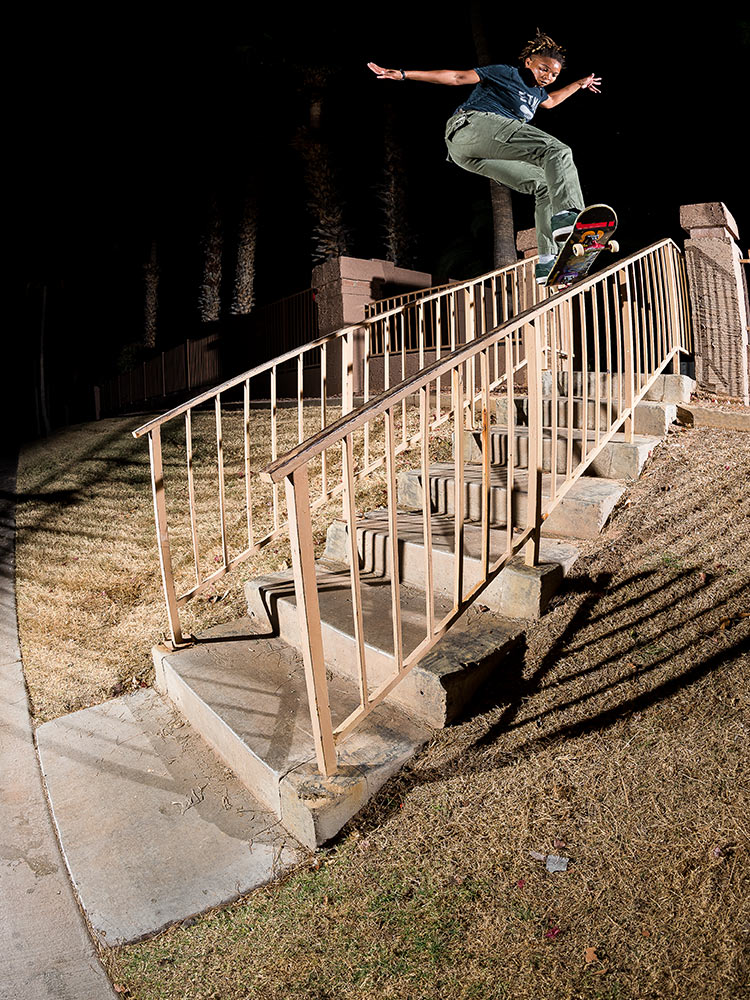 We knew from KOTR that Samarria wasn’t afraid to jump on the rails, but seeing it in person was awesome—nocturnal front board while the neighbors cheered her on from over their fence 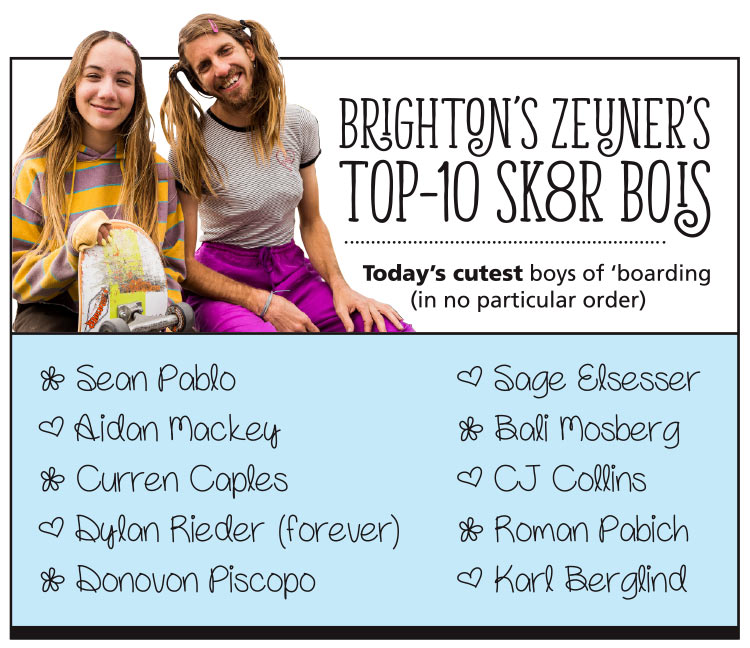 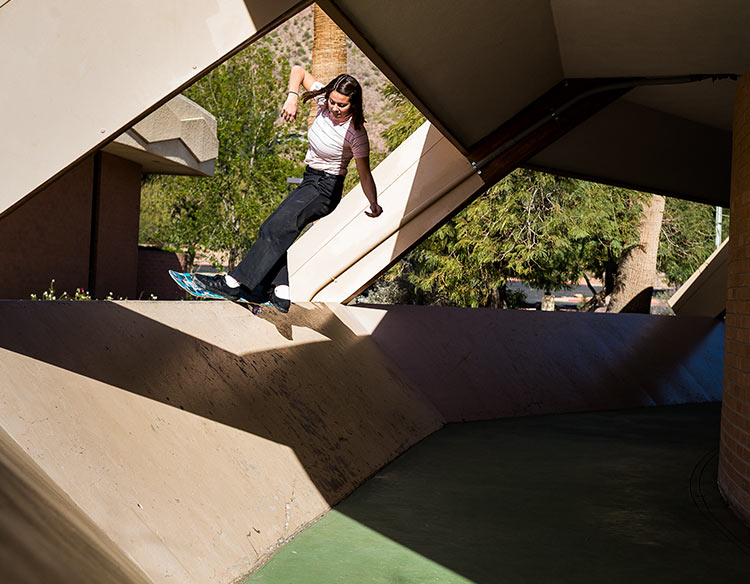 Nora smacked her dome on the ceiling on one attempt, but a little hard cider helped ease the pain—front feeble

Mike’s pool in Gilbert, AZ, is reminiscent of Arto’s late Hollywood gem: a kidney with a nice deck and lush grass surrounding it. Allysha, Lizzie and Yndie went into full attack mode. Brazil would have been proud of Yndie’s laid-out Smith grinds and full-send slobs. I bet Allysha a pack of ciders that she couldn’t land a fakie nosepick—she won. Sulking in defeat, I laid down on the deck near the pool and thought to myself: don’t fall asleep here. That’s the last thing I remember before being awakened by Allysha’s board smacking me in the head. No hard feelings; it was totally my fault. Thank baby Jesus for stain remover, though. No way was I letting a little blood ruin a perfectly thrifted striped T.

She’ll Bondo the spot and backside 360 it, too! Nora reminisces on her ballet days and spins a perfect ditch pirouette. Do ya’ curtsy! 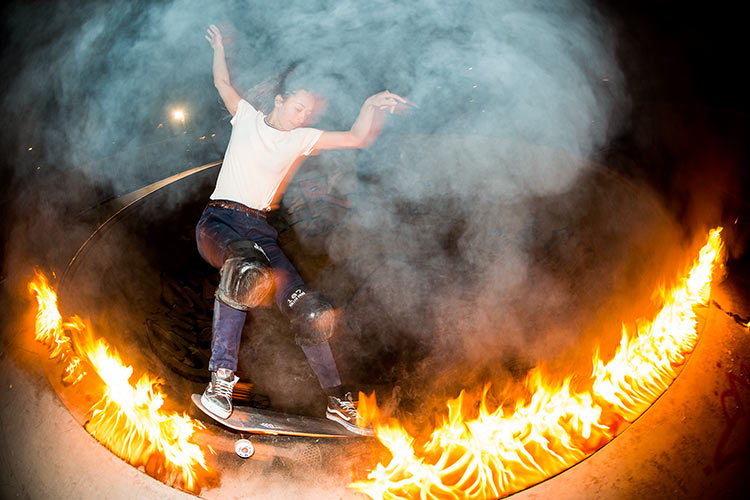 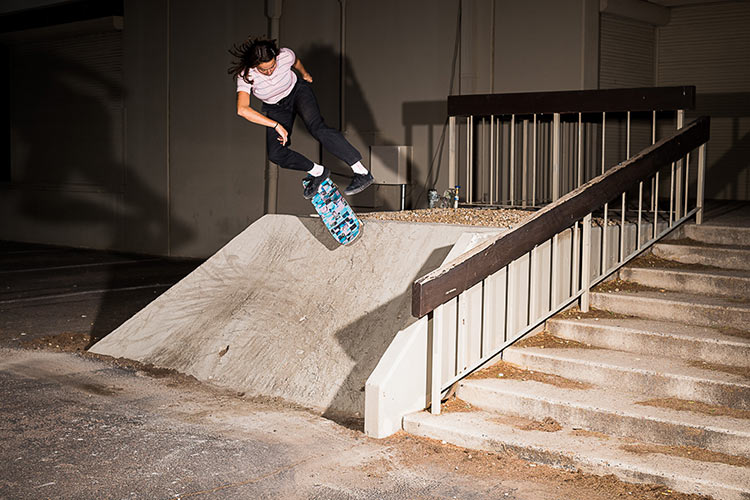 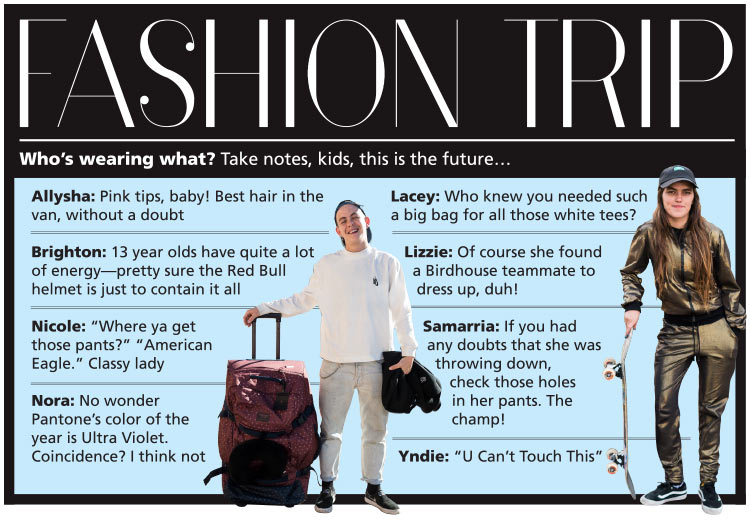 I developed a true love for Bondo on this trip, probably because I was chosen to be in charge of said task. In no time at all I had really proven myself with that shit. However, the combination of Bondo, griptape and general shredding created quite a mess when it came to the ol’ digits. The boys that were along for the ride could sense my need for a pick-me-up and off to the nail salon we went! We were all impressed when Rhino, Dan Stolling and Gavin Denike were the first in line to soak their piglets. They may say otherwise, but those boys wanted pampering bad! And if you had any questions about who was funding this mission, you only had to check Gavin’s toenail polish: orange and black. Get it? 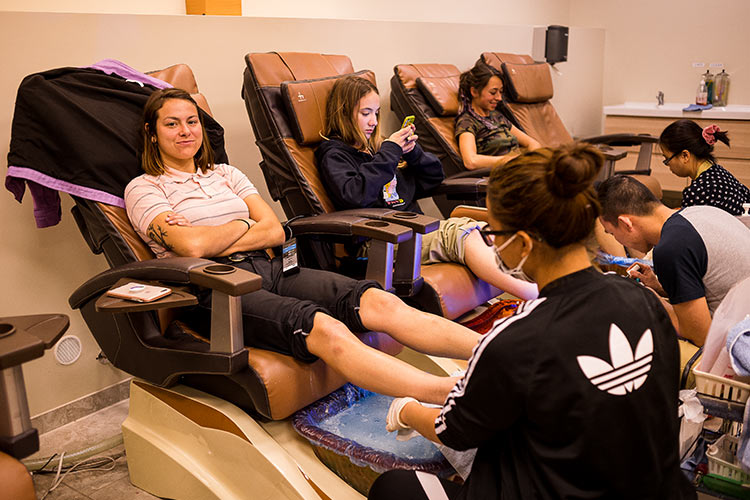 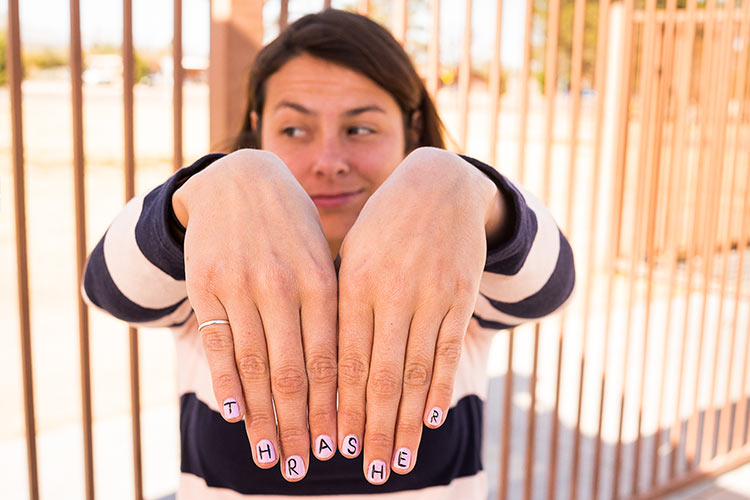 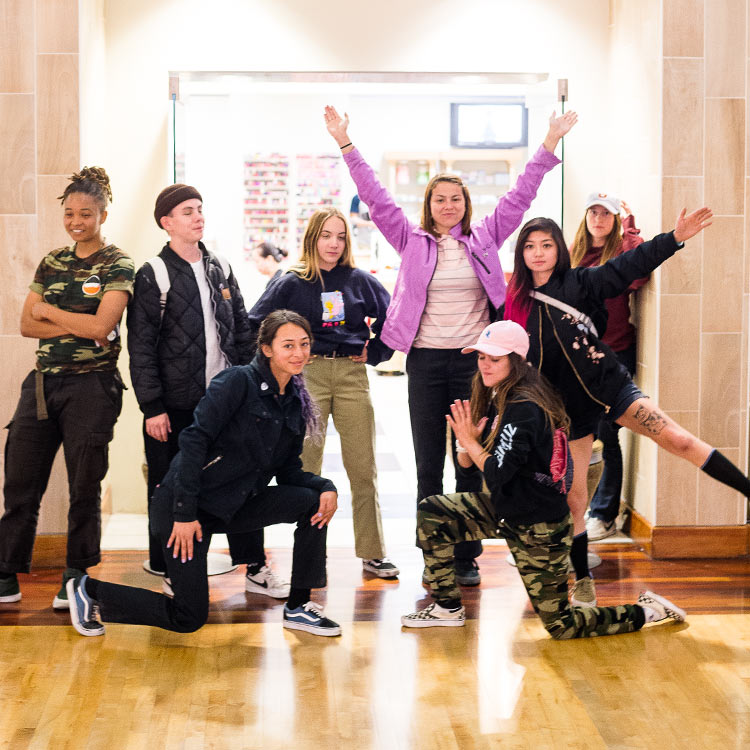 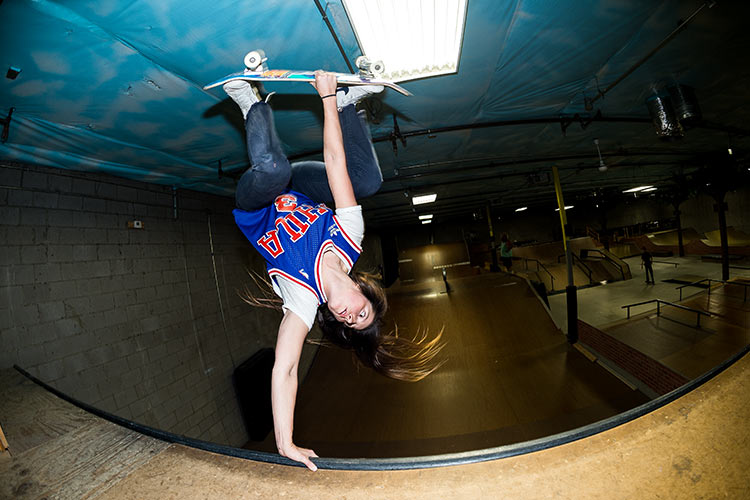 Nicole escaped the brutal Midwest winters and moved west for warmer weather. It was so hot in AZ that she didn’t even pad up for this invert

Remember when your older sister used to throw slumber parties with all her girlfriends? Nights filled with gossip fueled by nail-polish fumes and broken hearts. Now imagine all of those girls are all skateboarders. Well, our trip was nothing like that. Actually, it shared some similarities. We spent late nights in hotel rooms, sung van karaoke and had plenty of laughs. We lit things on fire, ate snacks and talked about our crushes. Half of us had our names put on skateboards this past year, so we shared stories of the changes that had brought to our lives. It’s strange that an all-girls skate trip would be such a novelty in 2018, but the way things are heading I’m sure it will become much more commonplace in the not-so-distant future. Let’s hear it for the girls! 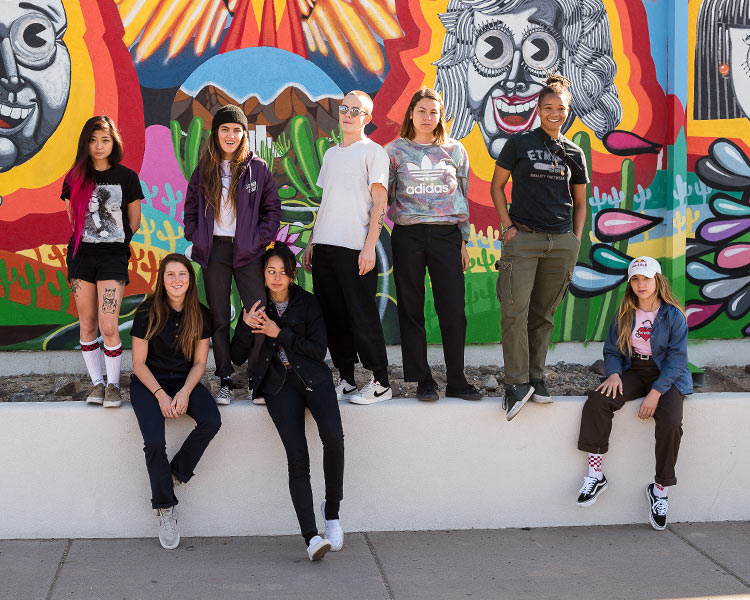 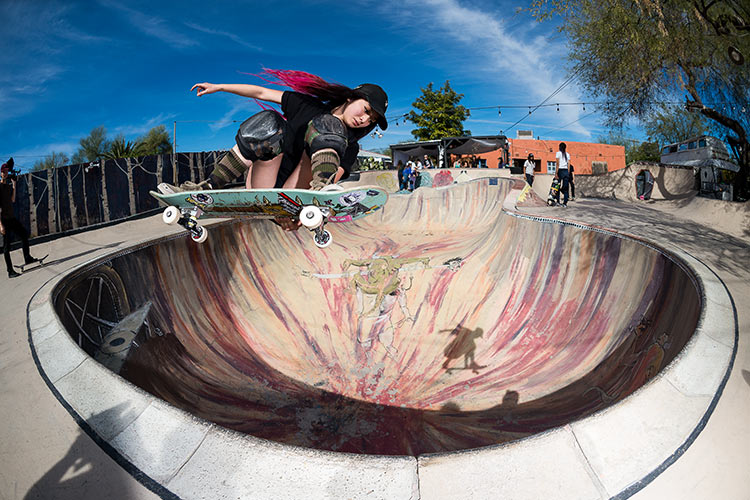 When you’re under five foot, the deep end of a bowl seems even deeper. Allysha Le ain’t scared, though. Mean lien with pink tips flyin’ 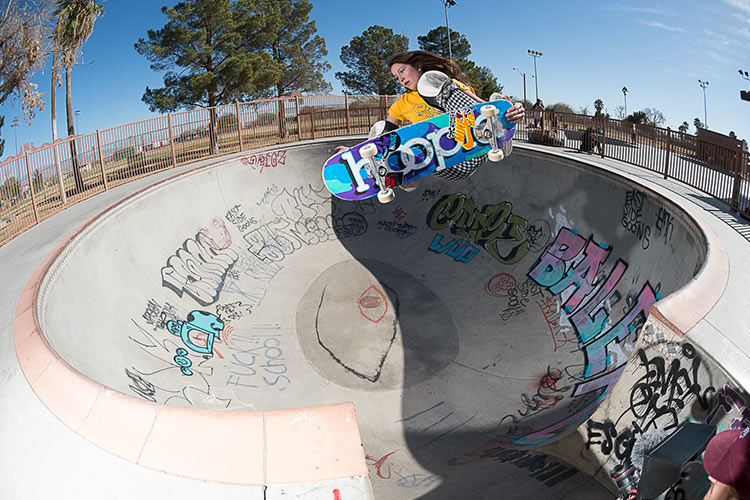 Color coordinating your board to the park graffiti is next level. Nicole, frontside tailgrab over the channel in Tucson 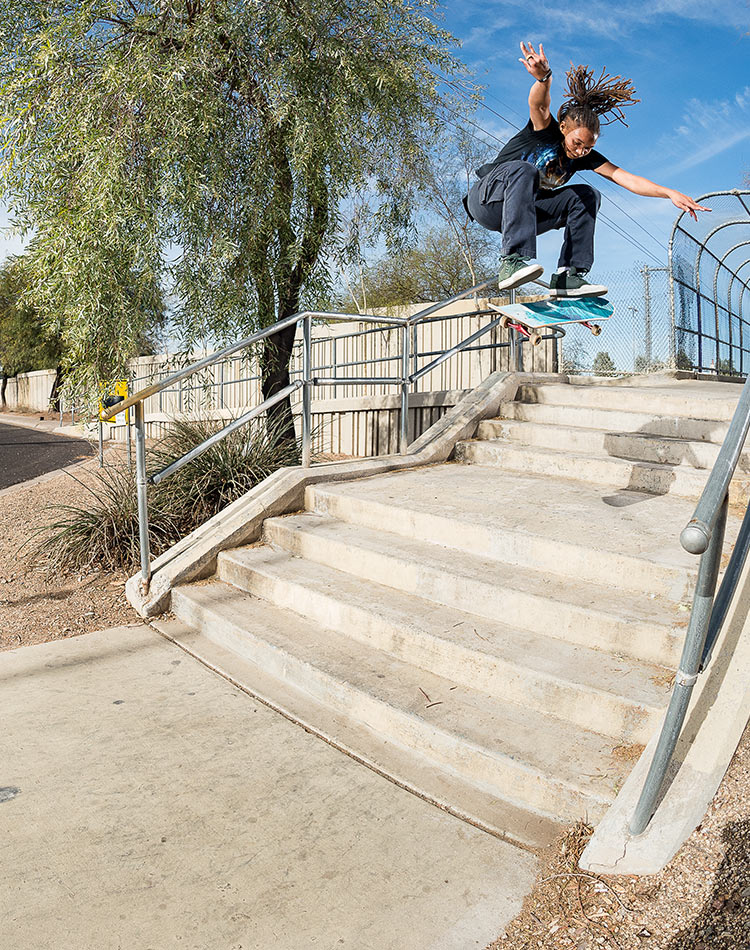 The only lady in the van to step to the double set, Samarria stomped this kickflip as easy as poppin’ off a curb 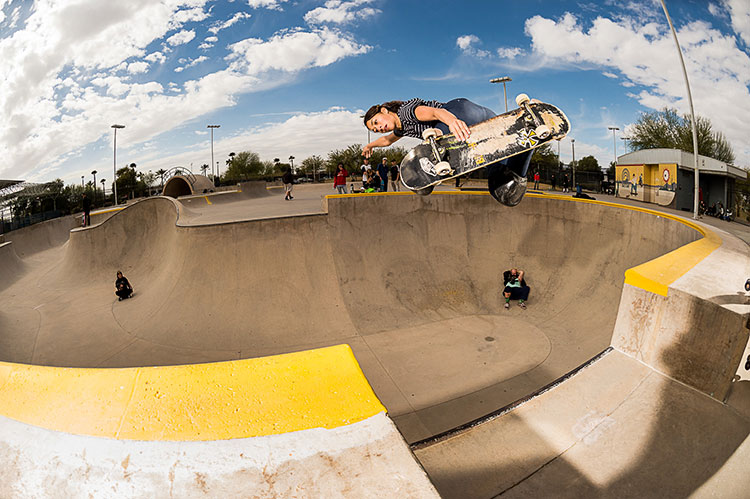 Lizzie, backside channel blast at Goodyear Park. The girls are better than good; they're F'n great!