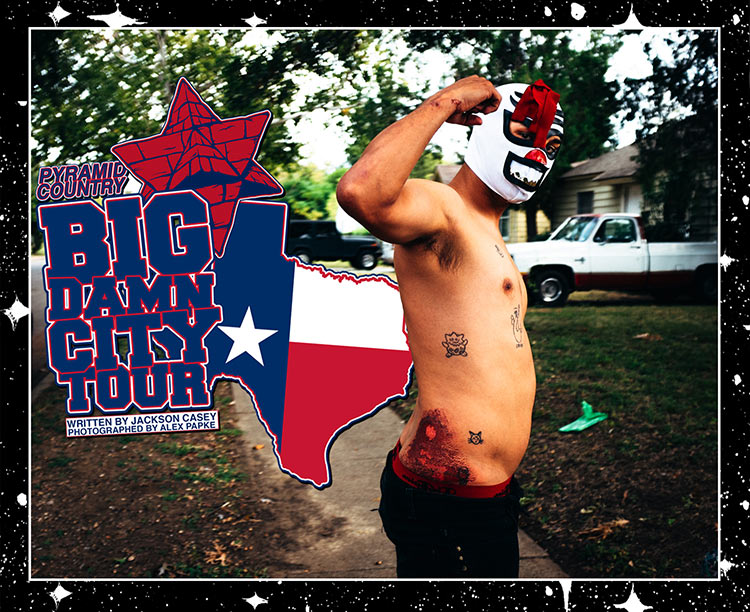 Jonathan Pierce fucked around and messed with Texas and got wounds the size of the Lone Star State to prove it!

In 2009, somewhere in Oklahoma, me, Jonathan Pierce and a few others were filming for a video I made called Boyish. We stopped and met up with my Uncle David, a very kind and slow-paced man. He asked us where we were headed, to which we replied, “Texas, maybe Dallas, maybe Houston.” Silence. We waited a solid 15 seconds and it started to get a little tense. Maybe he didn’t hear us? He had to have heard us, though. He was looking right at us. Then, quietly, under his breath, as if it were just a thought, he says, “Texas: Big. Damn. State. Dallas: Big. Damn. City.” We never did make it to Dallas.

Fast forward eight years and here we are, on our way to the Big Damn City that is Dallas, Texas. The ride there is quiet, lots of phone time only about half of us are driving there. The rest are flying in and out on their own schedules. As of right now, we are thinking separately, working separately. Maybe we unify on a head nod or two as a song we all enjoy plays in the background. This is how the road tends to be. The first few days make it feel like the trip will never end. This is almost what we refer to as “the sweetness,” but it isn’t quite there yet.

After a few days of skating all day, drinking and talking all night and sharing a living space, things start to change. You’ve lost track of time, are hardly on the phone with anyone anymore for any reason, everything and everyone you need is around you. No distractions, just skateboarding, laughing, coming up with ideas and working together. This is the sweetness. You’ve become a hive mind with the boys. Inside jokes are flying left and right with friends you’ve had for years and friends you’ve had for just a few days. The idea of home is foggy—home is in your head at this point. Happiness and sadness aren’t thought of. Happiness is just naturally occurring in the background of all the amazing shit going on.

Then, reality sets in. “Holy fuck, I am sore." "How many more days are you here for, dude?” “I’m leaving tomorrow, man. Sucks.” “At least you don’t gotta drive back!” All of the people you've been neglecting are starting to get sick of your lack of responses. Gotta make up for it. The last few days of a trip are always just going through the motions, patching up for the sweetness. It’s like a hangover, really. Still, there's nothing quite like it in the world. We had a great time on this trip, Dallas was amazing and our dude Keegan and his squad made us feel right at home. Here’s some evidence. 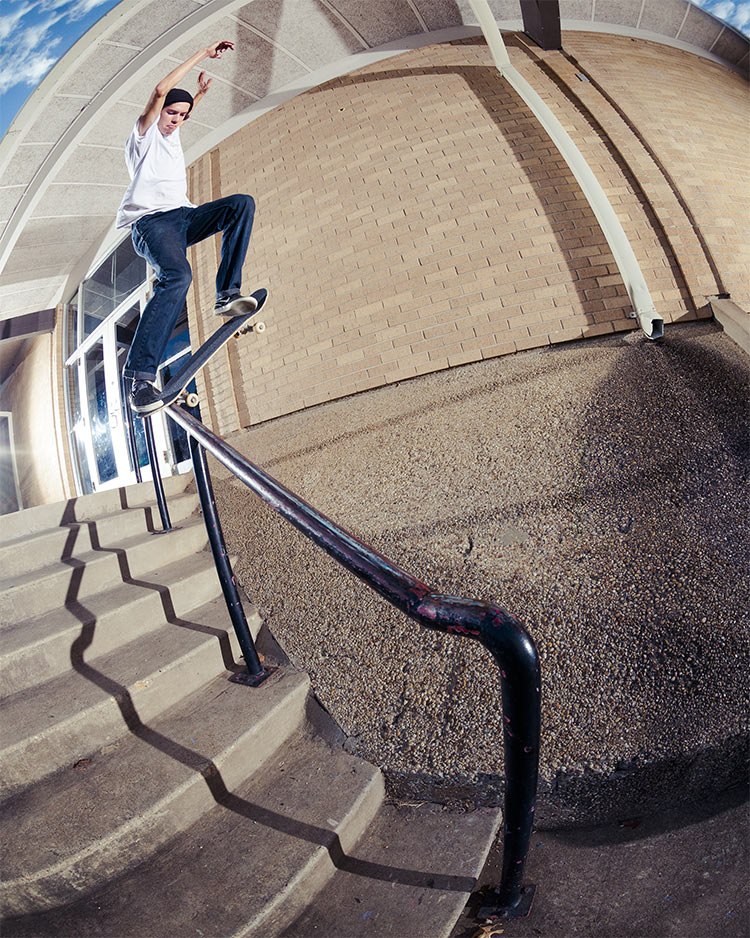 This spot is incredible and I think Rick skated it the perfect way. Rick Clark, bluntslide to fakie into the bank 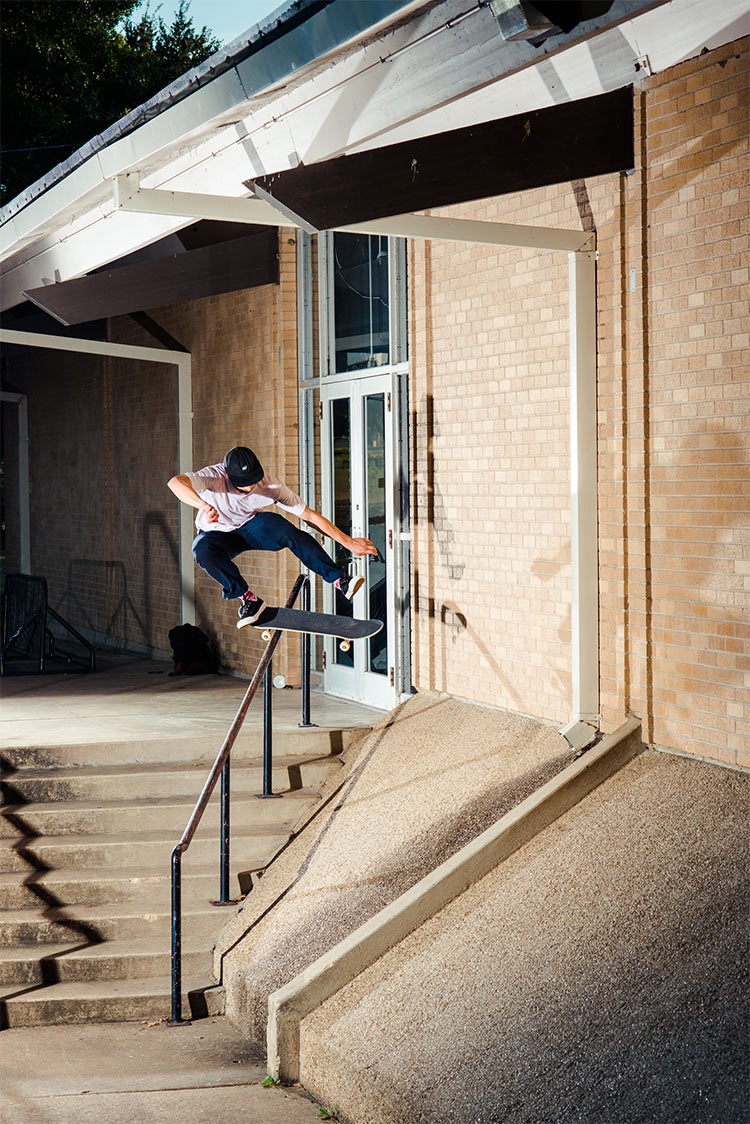 Another one of those perfect-trick-for-the-spot moves. Aric Blattner, frontside flip into the bank 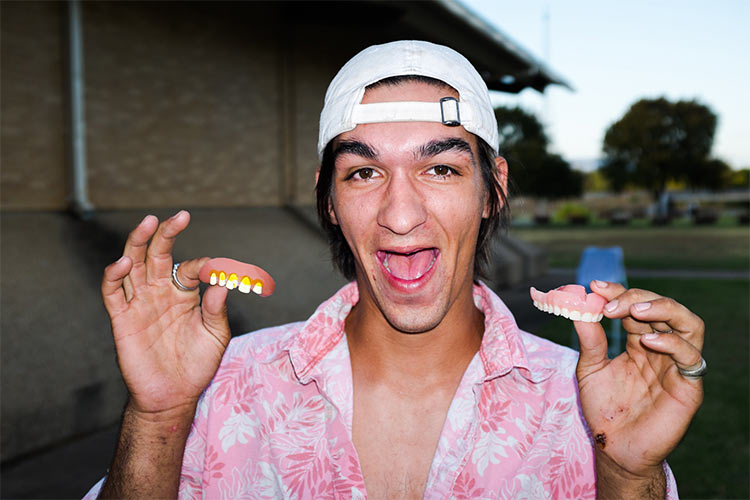 After Blattner and Clark had their way with the spot, one of the Dallas homies, Tanner, showed us his teeth. Which ones do you think are his? 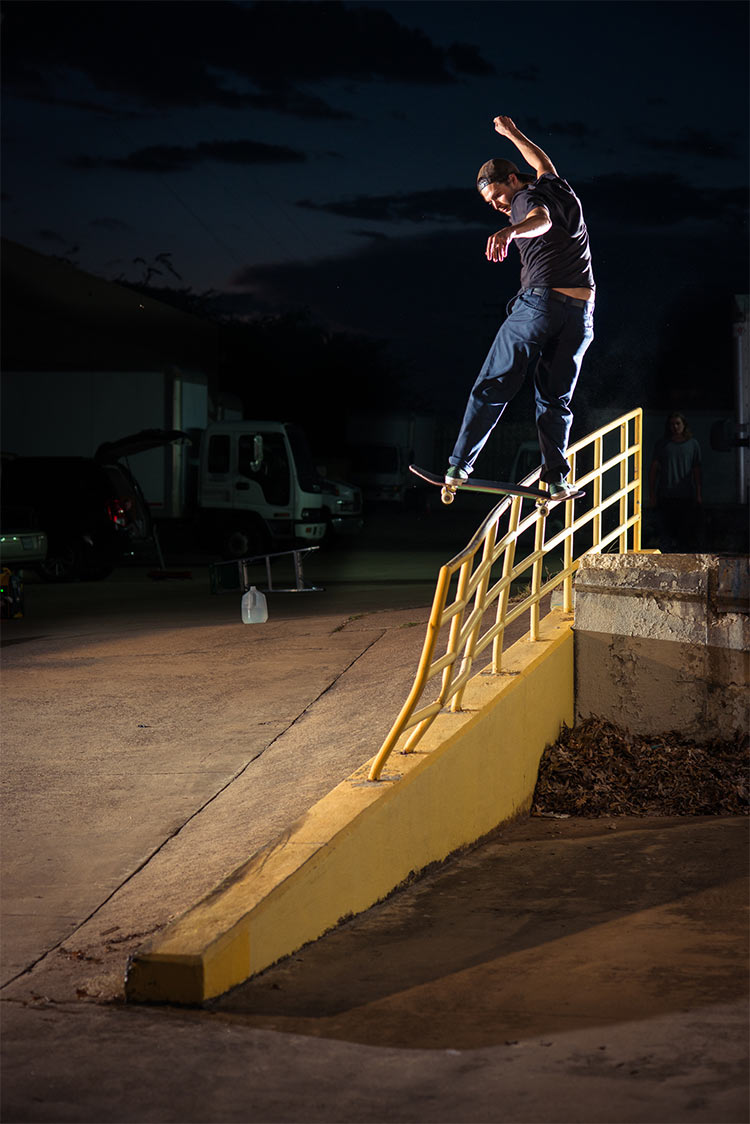 Papke climbed up on the roof at this spot and took a shit, then Townley got this front board first try. Textbook getting shit done, boys 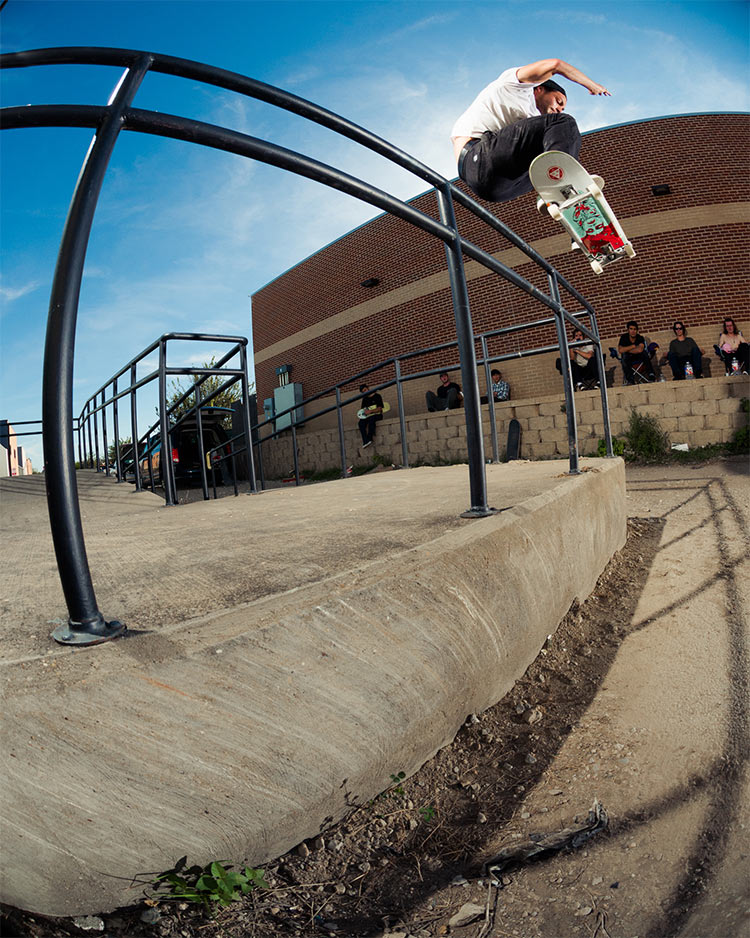 Keegan busted out the lawn chairs at this spot for the squad. We posted up in the alleyway just long enough for Townley to handle this half Cab. The landing is gravel, but he made it through 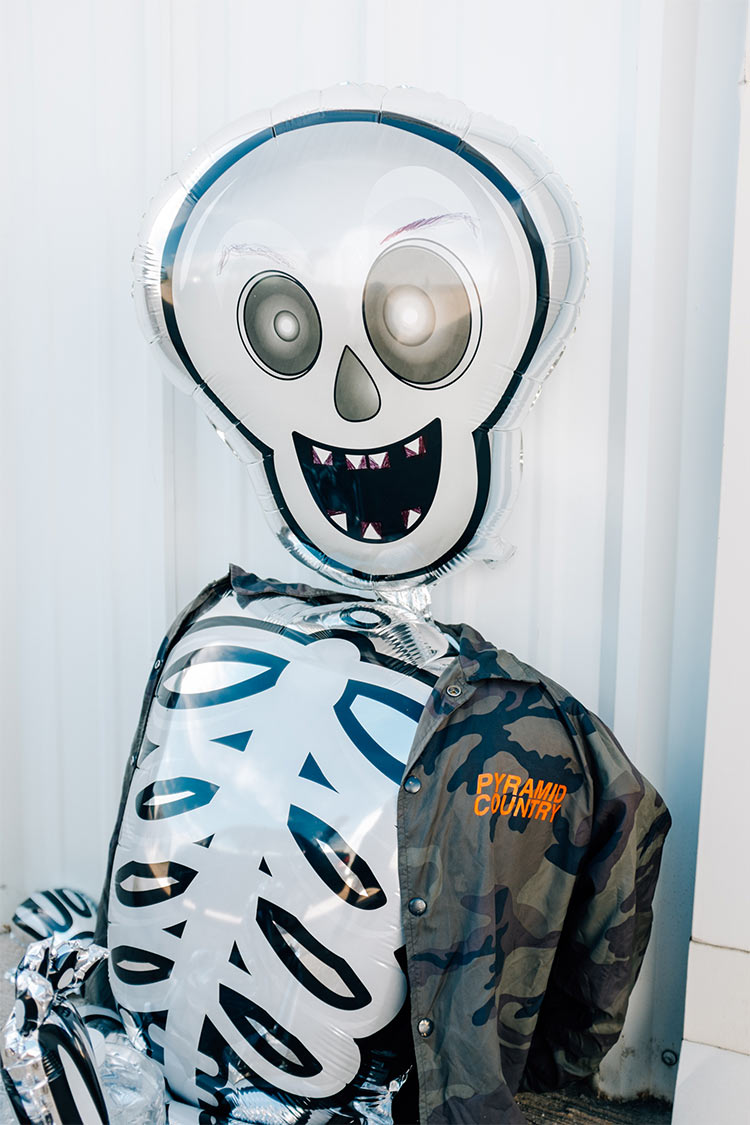 This guy Bonesaw wasn’t for sale at Tom Thumb (the finest supermarket in all of Dallas) but Keegan talked a worker into letting us take him anyway. I think he wore more Pyramid Country gear than most of the guys on the team throughout the trip 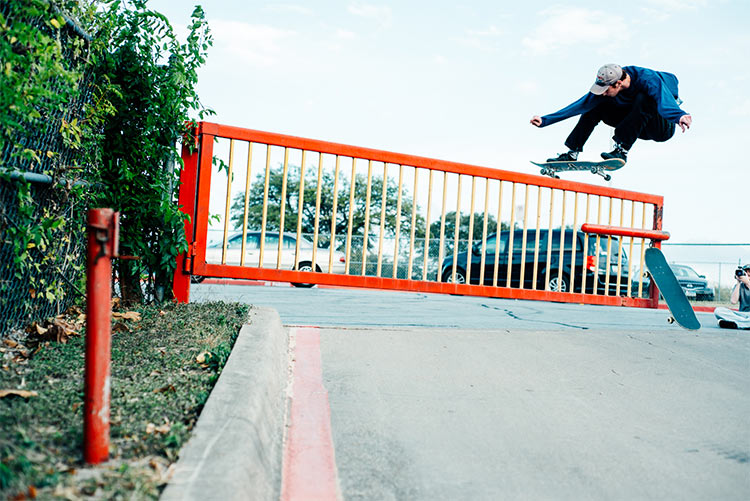 I'm gonna be honest; I didn’t think it’d be possible for this one to be hopped over, but Keegan handled this mondo back 180 second try, no problem 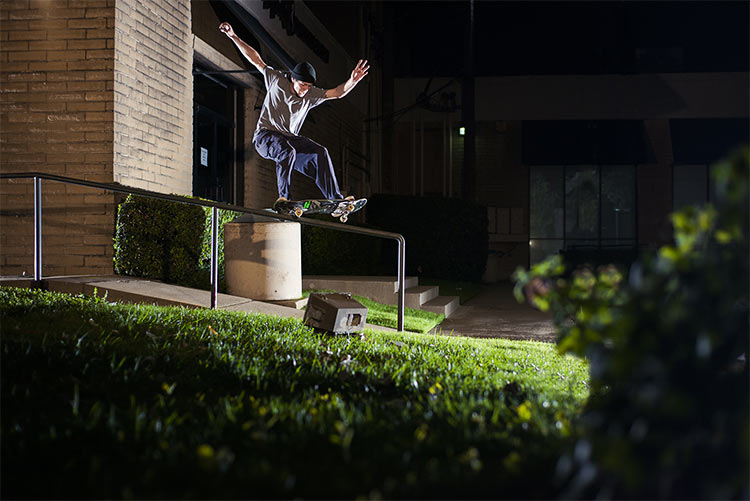 Klay Andersen flew in from Seattle for this trip. He also flew at this rail for a 5-0 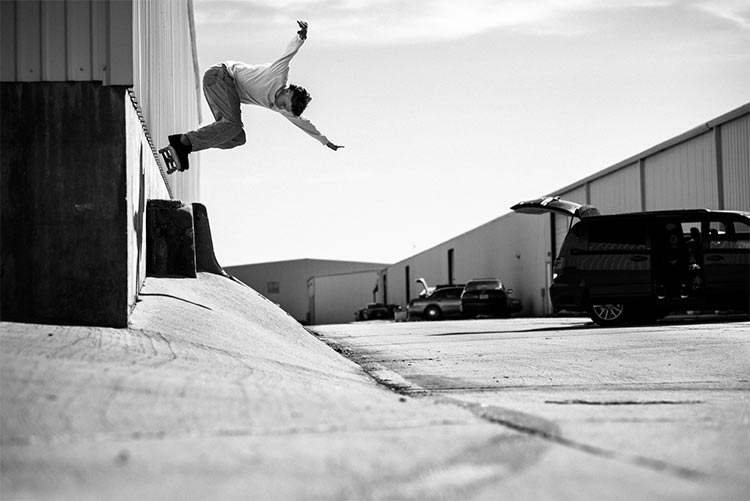 Aaron Goure, ladies and gentlemen, doing what he does best: some shit that doesn’t make sense—wallie to wallride seconds before the cops showed up and gave us some cute little pink slips reminding us not to come back. I've never understood why people call the cops before asking you to leave themselves. Either way, we got the trick and got the fuck out of there 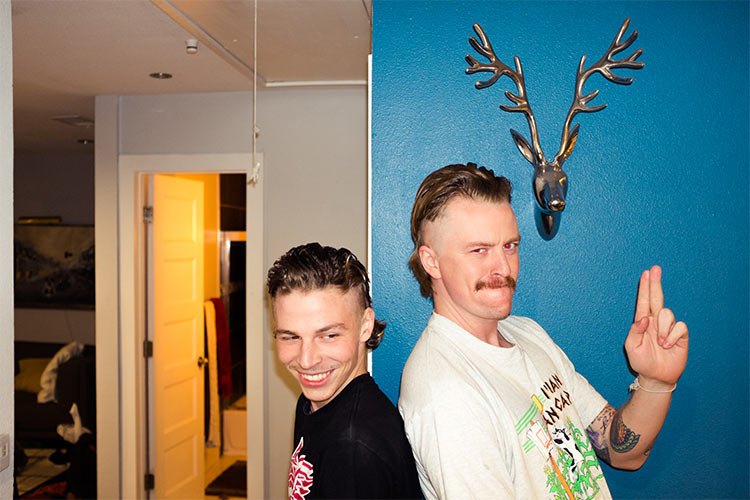 Goure and I decided to bum our girlfriends out by letting Papke cut our hair. I think it worked. I ran the mullet longer after getting home, though. Aaron pussed out promptly 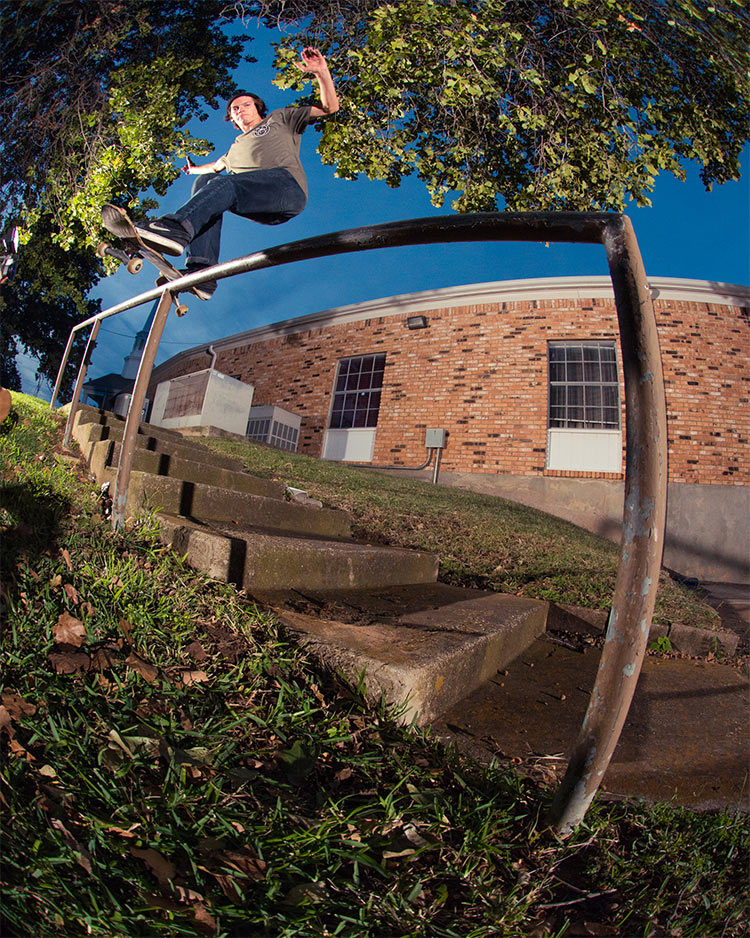 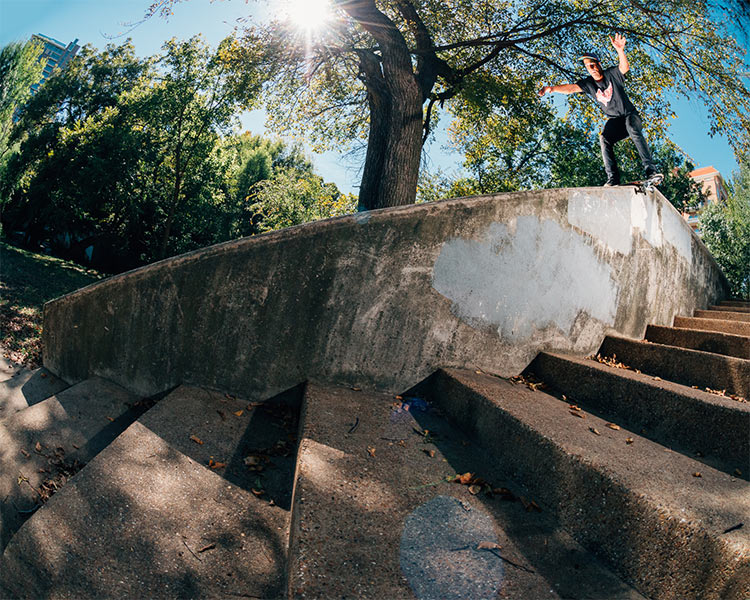 This spot is fuckin' crazy. We couldn't figure out why it was built, but Jonathan handled this switch boardslide pretty quickly. There was a nice stream nearby and I remember eating the best chicken of my life here. It was from Mike's Chicken. I'm still thinking about that chicken 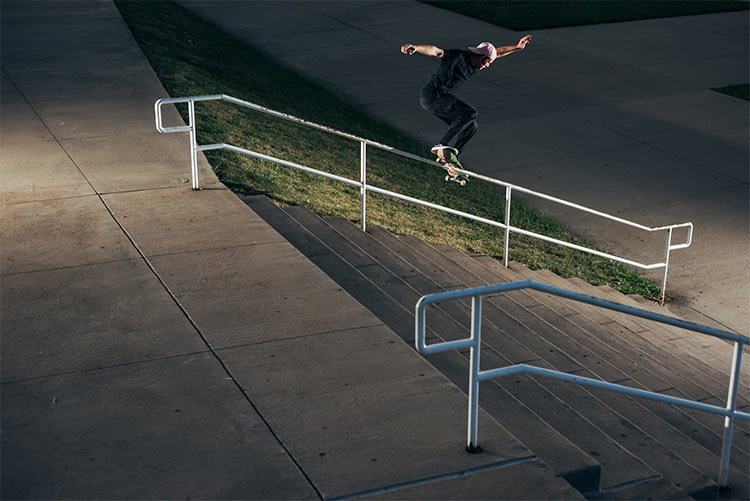 This was fucked to watch. That uphill landing sure is unforgiving, but it was no match for Klay Andersen. Frontside Smith grind 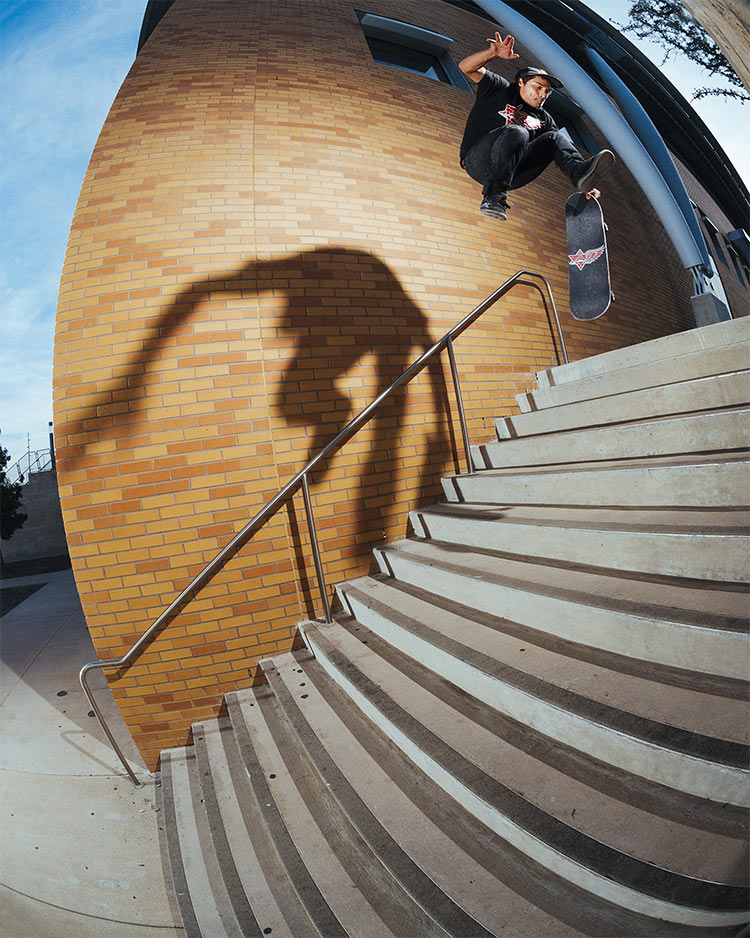 Jonathan had two ankle surgeries within the past year. Not only can he already walk just fine, but apparently he can fakie airwalk off of skyscrapers, too. It's so good to see him back on it. This behemoth of a stair set is responsible for Jonathan’s Texas-sized scab, but that slam wouldn’t be enough to keep him from rolling away

Shout out to Keegan McCutchen and his crew for showing us around and for being great hosts. Shout out Tony Vitello and Thrasher mag for holding us down and making this possible. Shout out to Chip’s Old Fashioned Cheeseburgers, Mike’s Chicken and Tom Thumb for taking all of our money. It was worth every penny. New video on the horizon…
© 1981–2022 High Speed Productions, Inc.