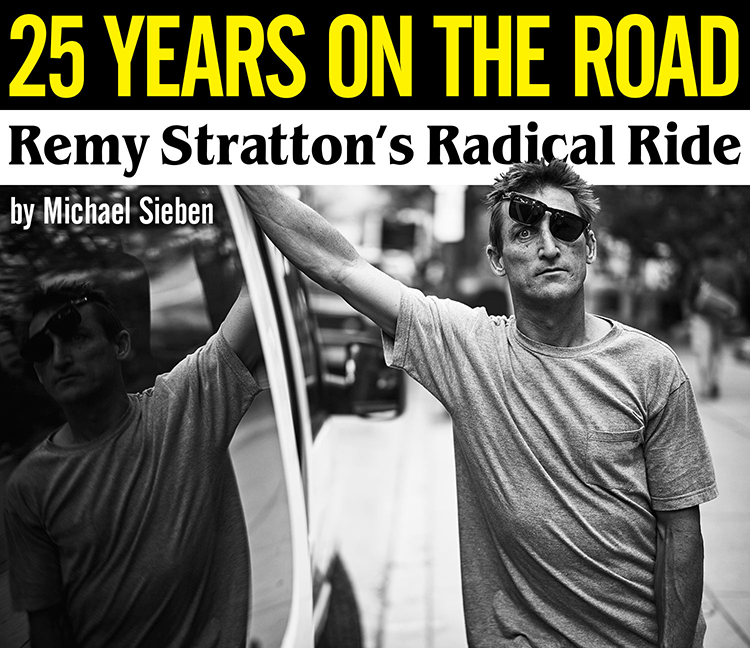 Hey, Remy, where are you right now?
On the roof of Volcom scoping this storm rolling in.

What year did you retire as a professional skateboarder?
That decision was never made. It’s not like you hang up your last complete and never look back. Plus, that sounds funny to say or hear—it’s total jock talk. I still skate all the time: we have a sick park here at Volcom, I have strange skate dreams, love to slap curbs, hack a backyard, roll a park, pad up once in awhile. Sometimes I’m stiff and snagged; sometimes things work out okay.

What year did you start working for Volcom? What was your first job title?
I joined up in ‘92 full time. Special Projects Director was my first title: I got into trade-show booth designs, window displays, point-of-purchase displays and shooting catalogs which were paper line drawings at the time. Even though I was still pro and traveling, between trips I got heavily involved. Before that, I worked for my dad throughout junior high and high school. He had a good-sized woodshop and I learned a lot of craft skills early on.

So those woodworking skills helped you build shit for Volcom?
Yeah, we learned all sorts of things. I hated working as a kid but looking back it was really a blessing.

What year did you become the skate team manager?
Nineteen-ninety-four or ‘95 maybe? That Special Projects Director title didn’t last long at all. Skating demanded full attention and they said to me, “Who else is going to do it? You have to.” 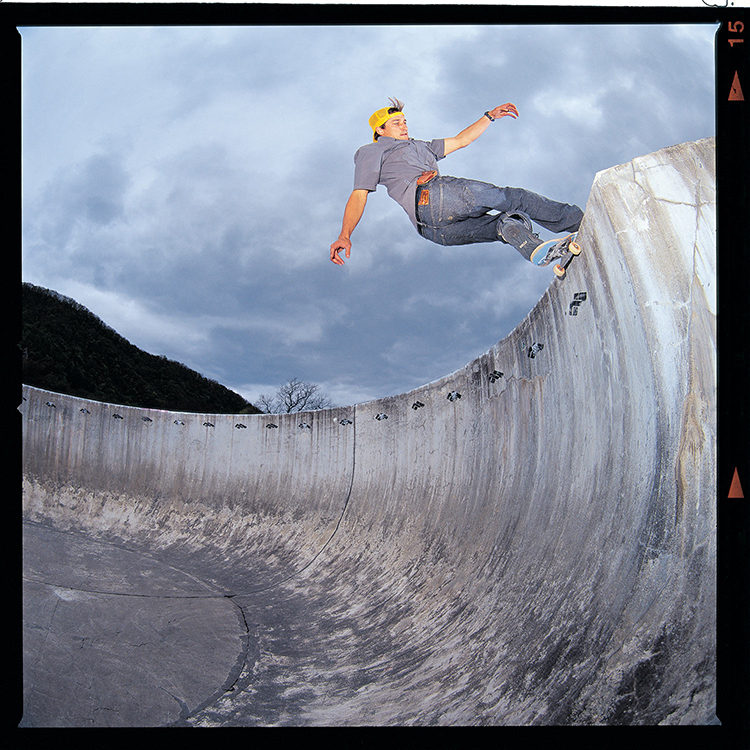 How many Volcom skate trips do you think you’ve been on so far?
I never kept track. What’s a trip: a day, a weekend, a week, international, domestic? But let’s say over 25 years I took three-to-five trips a month. That would be 900 to 1,500 trips. I had travelled a bit already. I was tuned in visiting my mom’s side of the family in France, had been on Skull Skates and G&S in the ‘80s and traveled to Europe a few times on tour so I was familiar. I loved the road. Growing up, I’d hit spots with older friends that drove. My dad’s side of the family was from Chicago. We National Lampooned there a couple times. I never really put much thought into it. I was just down to go anywhere.

Are there any countries you haven’t visited yet in the search for stoke? Are there any spots left on your bucket list that you want to travel to?
For sure, tons. I’d like to cruise deeper into Eastern Europe, go back to the UK. But really I want to go to Alaska.

In all these years you’ve never been to Alaska? How’s that?
I don’t know. I heard there’s a couple spots. That reminds me: before Scott Stamnes passed away, I always wanted to go visit him and check out his fishing boat, Chicagof, the one with the ramp on it. The Volcom skate video Chichagof is named after his boat. It was a tribute to him. He lived in Ketchikan, AK, and I wanted to go fish with him there. That’s where I want to go first.

What’s been the most bizarre location you’ve hit?
When we were filming for Chichagof, Tsyoshi showed Alan Petersen, Rune, Alain, Juergen and me some forgotten Japanese ‘crete up in Hokkaido. Phelper and Luke Ogden were there too. Mikasa was one of them but there were a couple other spots that were not in the film. They were old and abstract, painted up like funny amusement parks. It’s the abstract that keeps terrain fun; imagination is rejuvenating.

When the shit hits the fan and a hotel room gets trashed, are you the dude that ultimately has to deal with it?
Depends on who’s at the helm. In the early days when it was just me then yes, for sure. I’ve spackled walls and so forth, been turned away, denied. Once I had to speak to the cops amidst a kegger in the parking lot while flying a big kite on psychedelics in Las Vegas and successfully pulled our whole armada to the desert. The calls of duty have been questionable. Jake Smith, the current skate team manager, has had his fair share as well. He’ll run a pretty mean game. We all watched a gang shoot out from a few floors up, front-row style. Right after a late night check-in, the show began from under our windows when a club across the street was closing and emptying out into the intersection. It was nuts.

Who has been the craziest dude to deal with on skate trips?
Choppy Omega, the ultimate showman. Somehow we never had a major problem but it’s all relative on that level. Are you gonna whine about it or embrace it? He would take everything to orbit.

What’s the gnarliest thing that’s gone down on a skate trip?
Tough choice. We were on a Midwest tour once and we had a raging crew: Bam, CKY—I can’t remember everyone—Poncho, Jaya. Lance Dawes was shooting and Alan Petersen was driving the RV. I was out front in my dune buggy that we had trailer’d out as a satellite vehicle. I’d take it out on long-drive days for freeway runs to break up the monotony of being in the RV or just mosh at a spot. So I had convinced Alan to take a turn at the wheel of the RV so me and Rowley could make a run for it in the buggy. Alan was concerned, asking if the oil had been checked and what he needed to know to drive it. I thought it was dialed and told him not to sweat it. So long story short, somewhere in between Oklahoma and Missouri, I look in my rearview mirror and see the most epic vision of the front of the RV shining in the light of the afternoon sun surrounded by grey and black smoke covering all lanes of the freeway and flames shooting from below the motor. Luckily, a big rig pulled over and put out the fire with his extinguisher—we didn’t have one on board. We got pretty lucky that the engine fire didn’t roast the whole RV.

Do the Volcom team guys get psyched when you grab your board and join in on the session?
I think so. For a minute, I wasn’t skating much and I think some of the younger generation didn’t even know that I skated. Hype levels are pretty great now. The squad’s all-time.

Do you get hassled to do a seatbelt grab every time you skate?
I seem to get hassled more about eggs. And before that, ollie to trucks. Seatbelts took years to resurface. 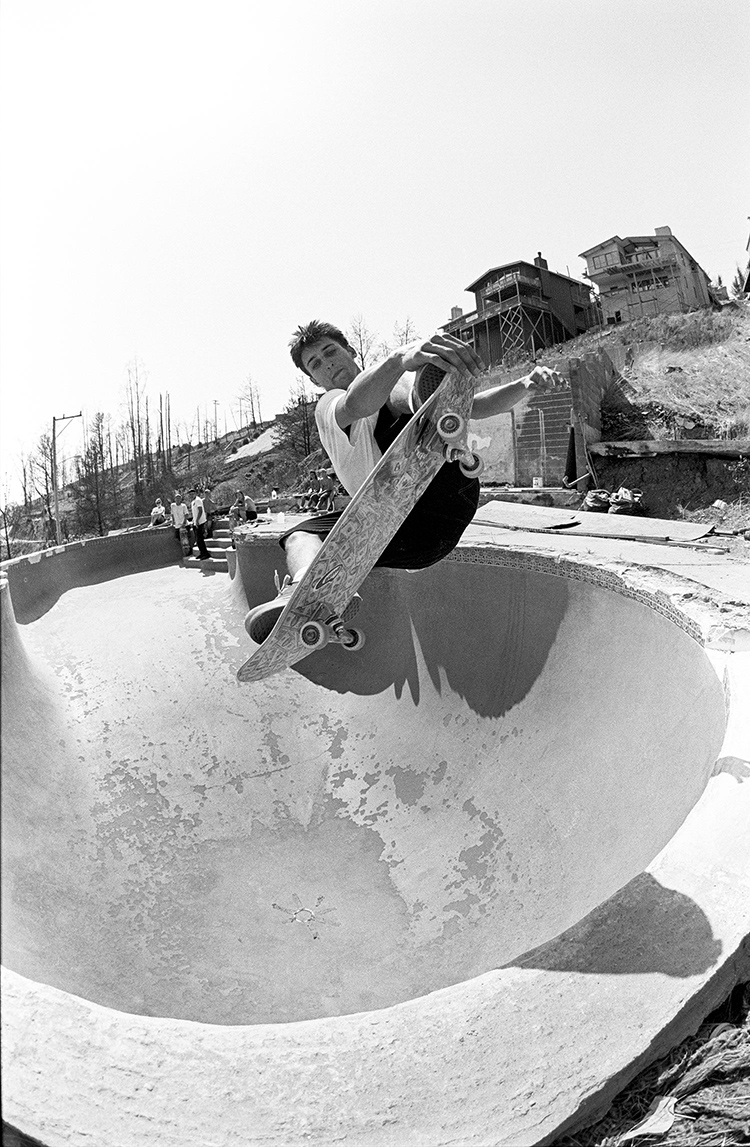 Remy buckles his seatbelt in the aftermath of the Oakland hill fires in 1991    Photo: Kanights

What’s the secret to a good frontside ollie on vert?
Lead with your upper body on the come up, like leaping up through an imaginary hoop and then bring the board up to you on the rise. Compress with it at the high point, then push it on the way down below into the pump.

Are you psyched to see this current resurgence of vert skating? Got any tips for the younger crop of vert kids on the come up?
There’s nothing worse than a vert robot. Get your vert on but skate everything and learn to turn, carve and pop. Skate the whole ramp. You gotta get nasty.

If you could put one dude back on the Volcom team from any era, who would you pick?
Raven. Letting him go was a real bummer for me. It was the worst timing for him and me both. It was a super tough call that I had to make. He is nothing but pure stoke and hype, a real natural killer. Even now, every time I see him he’s all love and super positive. Much respect.

If you could add any current dude to the Volcom team, who would you be stoked to put on?
I’ve been so buried with Holy Stokes and our current team that I haven’t even thought about it this year. I’m typically focused on new am energy.

Who is killing it the hardest out there right now?
I couldn’t say. Everyone’s got their place and brings the heat. We’ll have to let the people decide.

Whose Holy Stokes part do you think is going to surprise people?
Being the underdog, probably Daan’s. 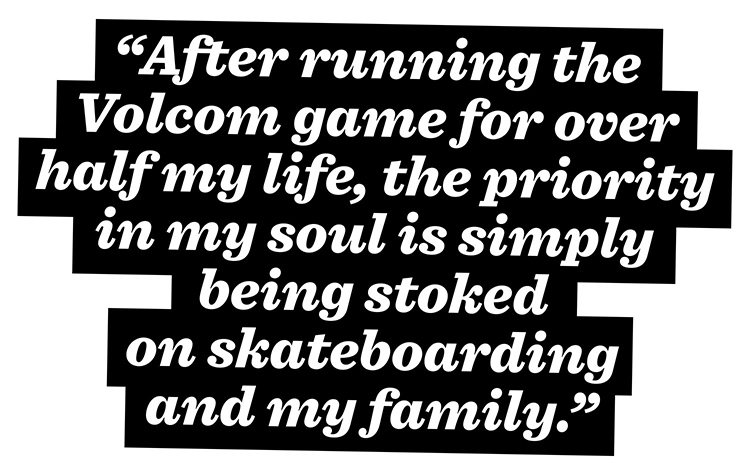 You recently got sober. Is that something you’d be willing to talk about? What triggered the decision?
Sure. First off, do what you do. For me, it just finally ran its course. I’ve had a lot of injuries—emotional, physical and mental. Skating is just way too much fun and holding myself back with an unhealthy lifestyle bogged me down. I worked it out and popped out on the sober side. After running the Volcom game for over half my life, the priority in my soul is simply being stoked on skateboarding and my family. I’m big on the dream and all that it has to offer. I really just want my team to get the most out of their lives and do what’s right by them. I just needed to evolve. I have to keep my internals aligned and navigate through the sludge of mankind. I’m hyped regardless.

Do you think Volcom will make another full-length video in the future?
Five minutes is the new 50. Who knows where it’s going? Attention spans are getting shorter and shorter. I will say working with Russell has been a positive experience. And for the love of skating we decided to up the ante and bust it in 4K, use all of his equipment and see skateboarding in the highest definition possible. It’s on iTunes. Get it and bust it in all its glory. We put a lot into it: lots of passion, blood, sweat and road time. The team went next level.

You’ve seen lots of kids come and go over the years. What’s your advice for the skater that wants to have a legitimate, long-lasting career?
You gotta express yourself and push yourself on top of being a naturally-driven person. Then get your psyche in order and learn to deal with society. 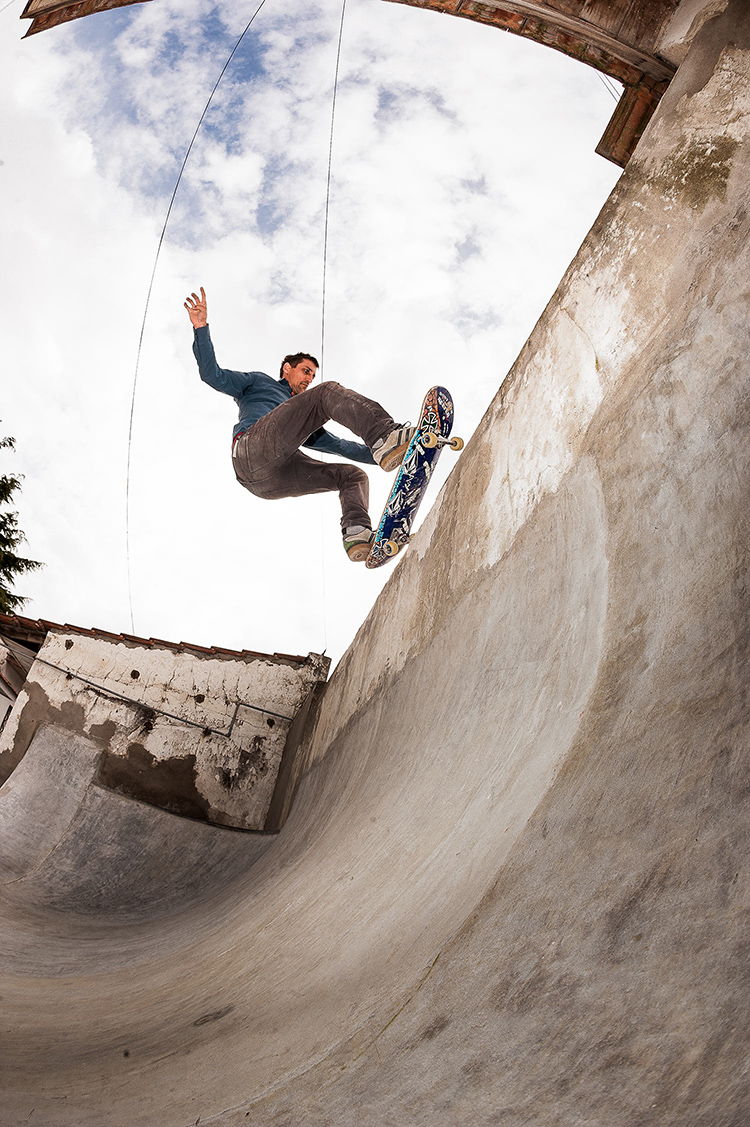