Skateboarding is Hilarious: An Interview with Comedian Taylor Clark 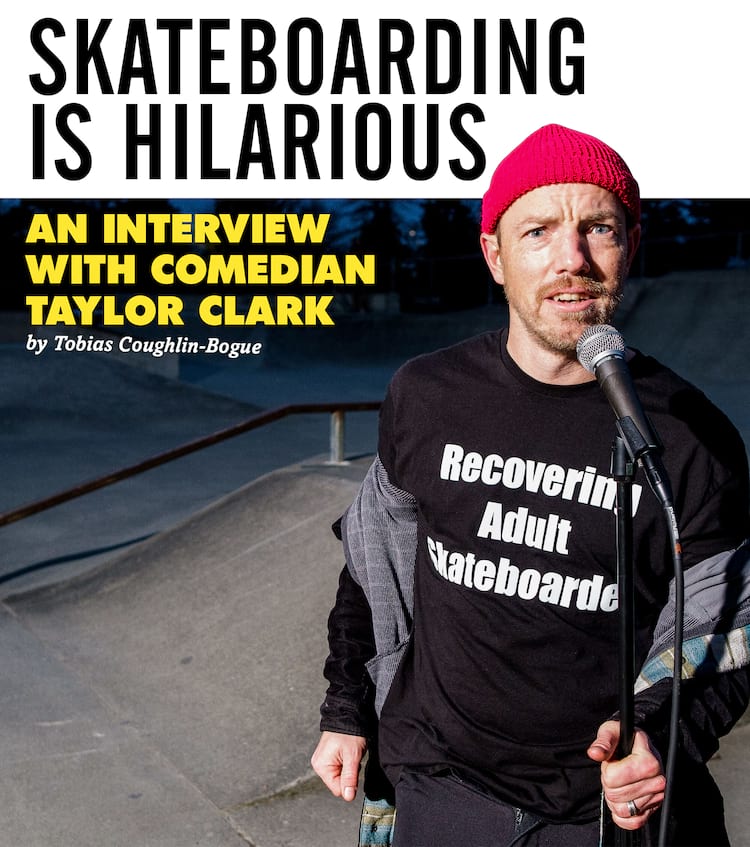 Taylor Clark is a stand-up comic who skates. Not like, skates sometimes. Like, he used to be flow for legit pre-Walmart Zoo York. However, he crunched his ankle and his skate career along with it, leading to a seven-year stint producing an indie comedy show in NYC. He and his family recently moved back home to Everett, WA, to take advantage of free grandparent daycare and figure out what was next. Turns out, it was finally finding the success that eluded him in the Big Apple. We tagged along on a filming mission (he’s somehow about to drop a full part) to get his insights on the crossover between skateboarding and comedy, the funniest skaters and how skateboarding prepared him for NYC’s brutal open-mic scene. Enjoy!


He's 24 years...into skating and this new part might just be his big break

Stand-up comedy is not something that most people think of skaters doing. How did you get into it?
I always kind of wanted to do it. I think most comics, since they were kids, always had it in the back of their brains.

Were you the funny kid in school?
I was the guy who thought he was the funny kid in school! But I got into comedy when I lived at this wretched North Seattle skater house called The NG. There was a comedy club down the street called Giggles—which turned into a strip club called Jiggles. They called it Jiggles because it had a cursive G and they were just like, “It’s ‘J’ enough!” I went to my first open mic there by myself, then my second. Not to do it, just to watch. It was like when you first see a skateboard—you feel that kind of calling where you’re like, Man, I just want to be a part of this. Funny story: it then turned back into a comedy club called Laughs Comedy Spot, which is where I recorded my album. I thought it would be awesome if the first stage I stood on to do stand up was the same stage I stood on to record my first album. Plus, that room has a ton of history. Marc Maron recorded one of my favorite comedy albums there, and countless pole dancers have slapped their butt cheeks on it. 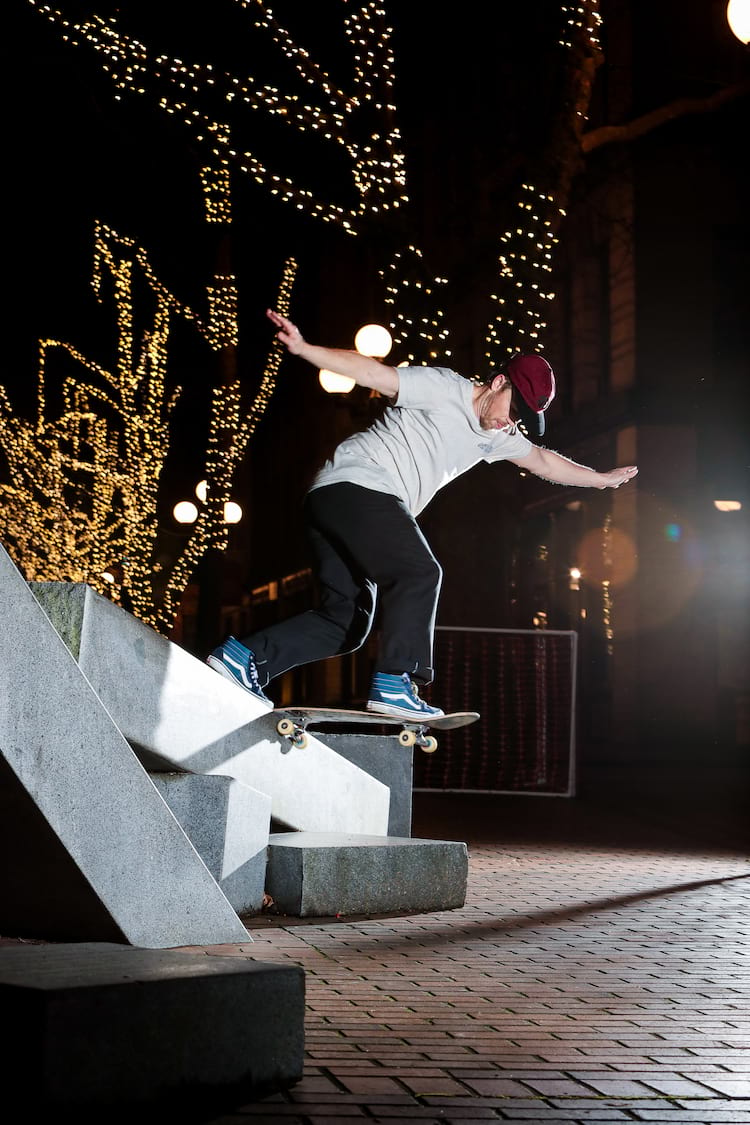 Upstream back tails are no joke      Photo: James

What has the comedy biz been like for you, since those days at Giggles?
It’s brutal. Kinda like skating, pretty much everybody does it for the love of the game and not that many people make real money. There are loads of gatekeepers with bad taste and it’s a political landscape based on a lot of criteria that have nothing to do with the medium itself. But also like skating, talent and skill are undeniable. Everybody watching can tell who is killing it.

What’s your worst heckler experience?
A lady threw a wine cork at me ’cause I called her a drunk. I’d never felt more uncomfortable on stage. But then I caught the cork in my hand like Neo. Then I was like, “Wait, they don’t serve wine here.” People lost it. Huge laugh. It not only proved she was a drunk, it got her kicked out for being a heckler and banned for sneaking in booze. I guess that’s my best and worst experience with a heckler all in one.

So there’s like flavors of failure?
Yes, and so much of comedy is bombing. But when I first moved to New York, I did what’s called a bringer. It’s a scam and only suckers fall for it. Like a good mark, I signed right up. I just had to find ten people who could pay a cover and buy two drinks each, so I invited the only people I knew: a bunch of Upper East Side moms who hate laughing. I was working as a “manny,” so it was my boss and her friends. By the way, I think babysitter and nanny are actually more masculine words than manny. People would call me a manny and I would be like, “I think I prefer nanny.” Anyway, my boss’ family, her friends and all their friends’ friends show up. It’s a big crew. The MC calls my name, and I proceed to just bomb hard. I think sarcastic laughs were all I got. I followed up the bombing with a complete freeze. I couldn’t think of another joke and I was only a minute into my set. I was blanking. I had to say something, so instead of my next joke what came out was this half-baked 9/11 routine. I was literally blocks away from where 9/11 happened. Death in space with earmuffs could not possibly be as silent as that crowd was when I finished. I turned to see my boss, the person who left her children in my care, the person who held my livelihood in her purse, begin to sweat profusely and turn ghostly white. I don’t remember what I said for the next four minutes. I blacked out. I got fired a few weeks later for getting arrested on a bench warrant, but I’m still convinced it was the 9/11 joke. The kids loved me, though!

Wow, that’s bad. On a lighter note, what’s been your biggest success in comedy?
This interview! But also the Seattle International Comedy Contest. Dude, the crowds were like hundreds of people. I’d been in New York doing 30-person crowds. If you get 50 people at a show in New York, you’re like, What am I, Jerry Seinfeld? I don’t deserve this. But here, open mics get 50 people. So when I moved back to Seattle, I was like, Damn! It’s a small scene still, but when I did the Comedy Contest and was rubbing elbows with all these pros—I did a show in front of 1,000 people! The feeling of that wave of laughter and then being able to do the moves, that was the first time I was really playing the audience—like an instrument. Just knowing the material so well where I could be like, I’m going to wait a little bit longer to get a crazy reaction. And to have my instincts be right, that was the first time where I was like, I’m a comedian. Like, I have the potential to do theaters.


Actual laughs from a real-life crowd, that shit's harder than half the enders we see

So obviously you’ve managed to succeed as a comic independently of skateboarding, but you also happen to be one of the only comics to ever tell actually funny jokes about skateboarding. Were you nervous to include those in your act at first?
It felt like a mandate almost.

Because skaters are like vegans, where we have to talk about it?
Just as a comic, you’re dying to find something original to talk about. And the main thing you have to do is draw from your experience and talk about yourself. I was like, My whole life is skating. What else do I talk about? I don’t really have any opinions yet; I’m 20. But as far as the album is concerned, it’s because every time skaters were in the crowd and heard the bits, I never got one bad review. Skaters would come up to me sometimes with this look in their eyes like I cracked the code.

Honestly, I understand because it’s like the first time anyone’s ever pulled it off. Even that Chris Rock joke we all love, it was a little like, Okay. Chill out, Dad.
You don’t know nothin’! But yeah, I was nervous about posting it online because I was like, This is when I’ll know. Any negative feedback that’s gonna come, it’s gonna come in the comments. 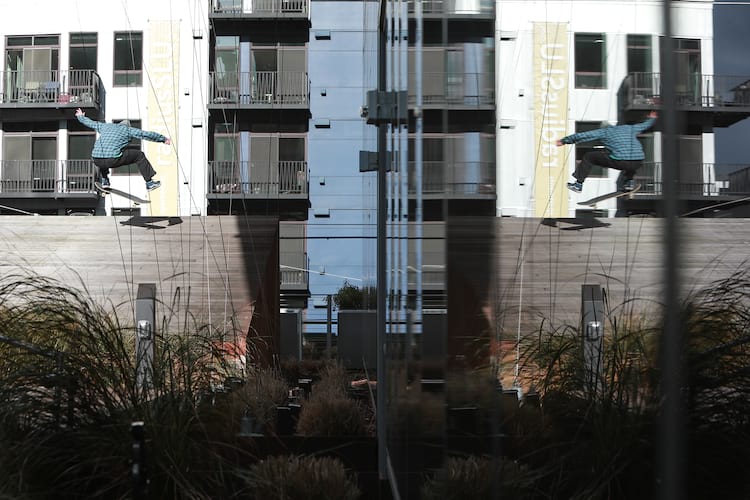 In your opinion, who are the funniest skateboarders?
I’m really not pandering here when I say this, but I genuinely thought Phelps was so fucking funny. Even as a kid I looked forward to his writing and video clips of him. He didn’t give a shit and he was hilariously rude and 100 percent himself 100 percent of the time, which most funny people are. I miss him. Tim O’Connor is witty. He’s legitimately funny. He could kick it with comics and keep up. I would be curious if he ever wanted to do stand up. Definitely the funniest skateboarder to me is Donovan Strain, though. He’s got a sense of humor and he’s got his own voice.

Is skateboarding funny? Like, is it inherently funny and ridiculous?
For sure. I think so. That’s one of the reasons I always wanted to talk about it onstage because it’s like—nobody is talking about this. How hilarious is this? That adult-skateboarder joke is a perfect example of like, How funny is this? That these old men care so much about this toy.

Like there’s something pathetic about it.
But what’s pathetic about it is also what’s so cool about it! It’s the ultimate creative medium. It really is just for the artist. The process of being an artist is just doing something for yourself, not for anyone else. That is every skateboarder. The guys who are trying to do it for somebody else, nobody likes those guys. 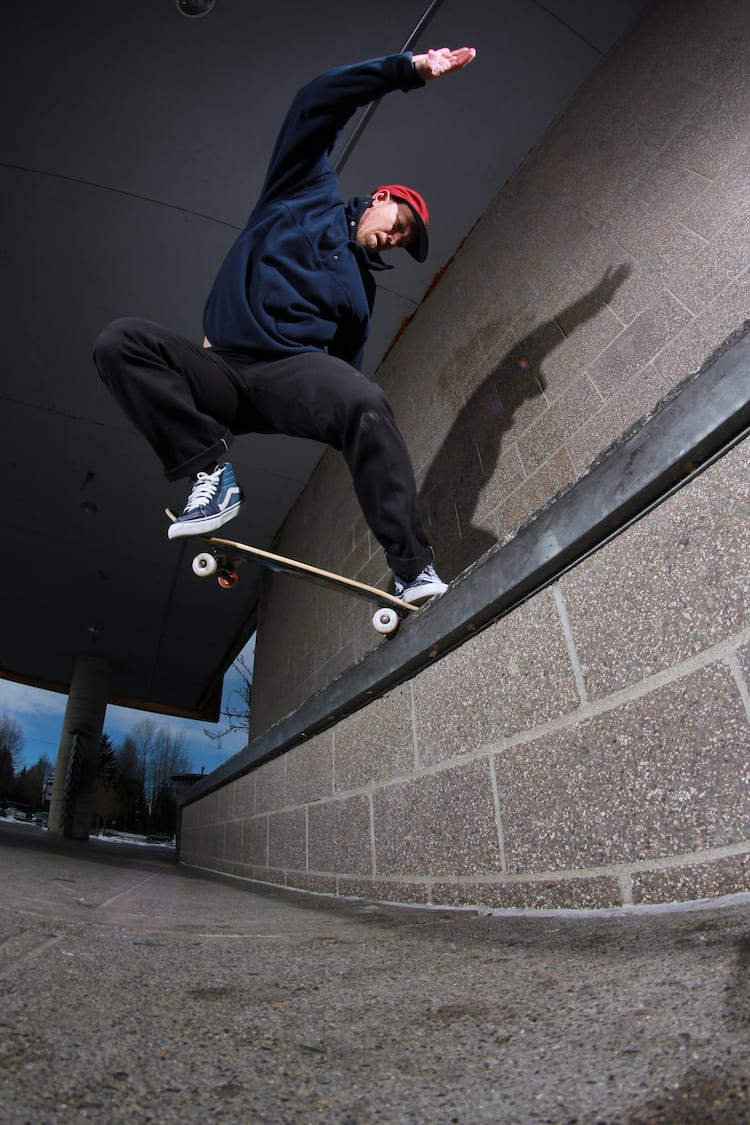 Sorry, Nyjah.
We might watch the videos or whatever, but we want the guys who you can tell are doing it for themselves. When filming video parts, I love if people love it, but it’s for me. I want to watch this video part and be happy with it.

One of the coolest things about skateboarding is how fucking broke all of us are and how, actually, no one makes money off it. You make an indie video, no one’s getting paid.
Dude, that Beagle interview where he talks about how he has been the filmer for maybe the greatest videos of all time, definitely some of the most influential videos ever, and that motherfucker drives for Lyft! You know what I mean? That is nuts. Puleo works as a barista!


Only scooter kids can get you to this breaking point

There’s like five rich skaters.
Rich? Supporting yourself is a huge thing. Not having a side hustle, that is a huge thing. Any skater, industry-wise, if you make a living—like actually $50-70,000, support-a-family kind of money—that is fucking amazing. That’s how I’ve always felt about comics, too. I don’t care if you’re working doing bar shows, you’re not famous, you didn’t write a book—but you make a living with your lips on the microphone? That is what’s up. That is the shit.

Not to pry too much, but are you getting close to that point?
I think this is going to help me cross the threshold. Long live Thrasher! 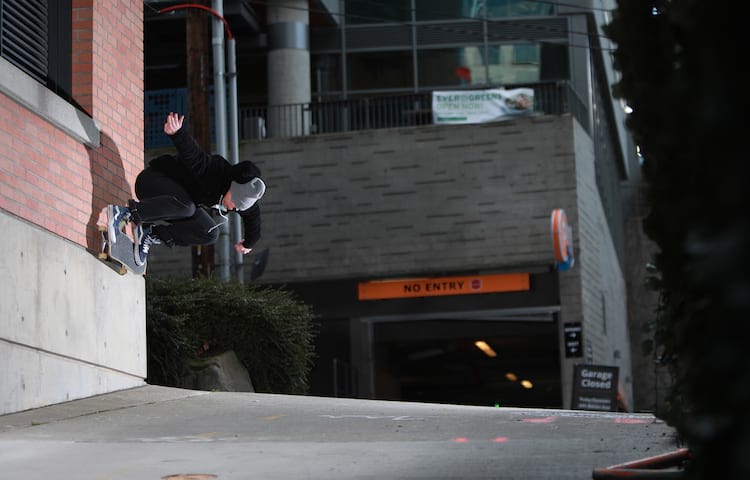 He'll make you laugh; he'll make you think and most importantly he'll get you stoked with his moves in the streets—wallride into the hill. Now that you know Taylor's the real deal, check out his site for info on his new album, and definitely see him when the stages get going again
© 1981–2023 High Speed Productions, Inc.