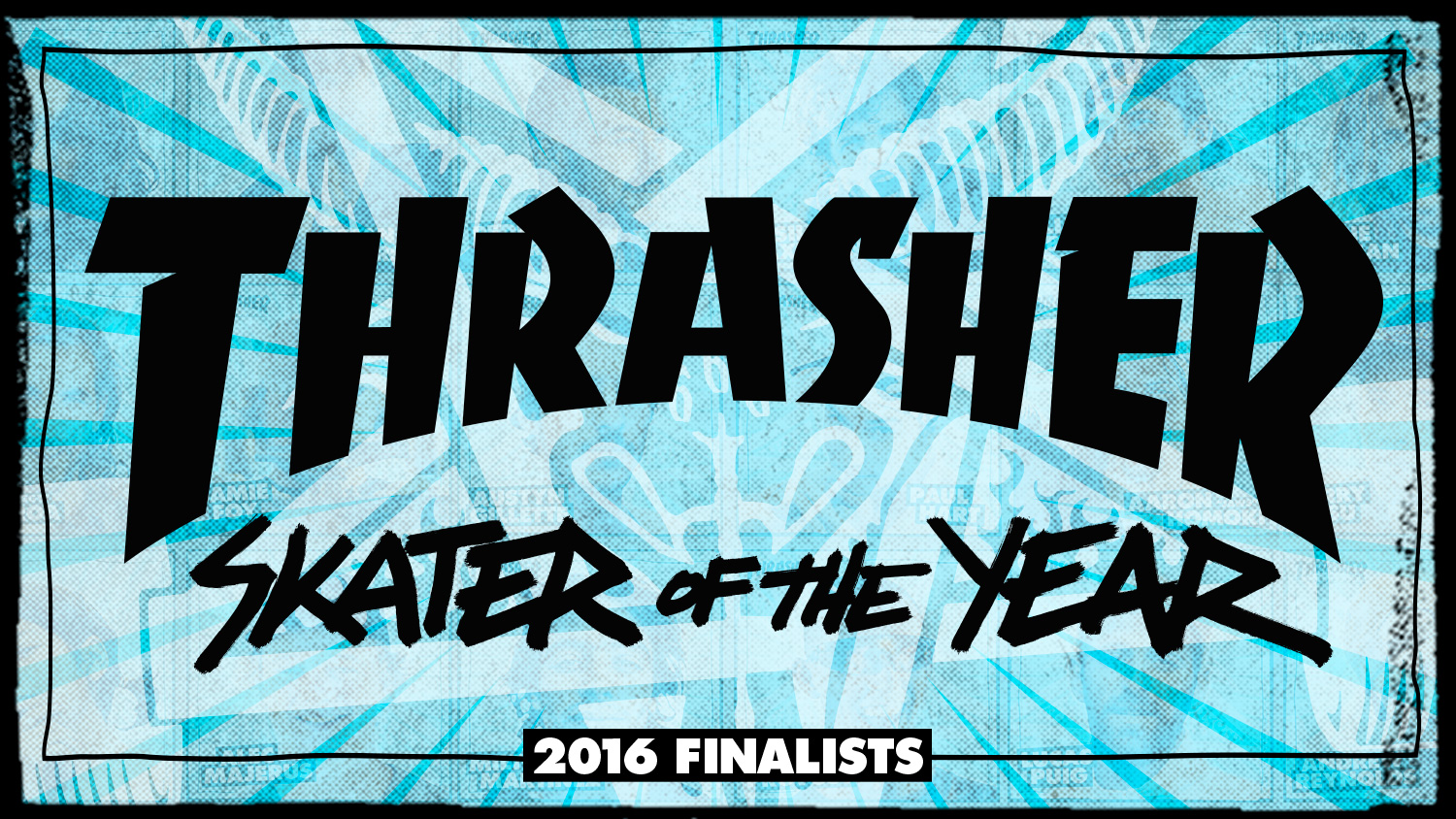 After the heaviest year on record we're proud to announce our eight finalists for the 2016 Skater of the Year. Check the stats, watch the videos and cast your vote for who YOU think should take the only award that matters. Congrats to all our SOTY contenders! Ain't skating great? 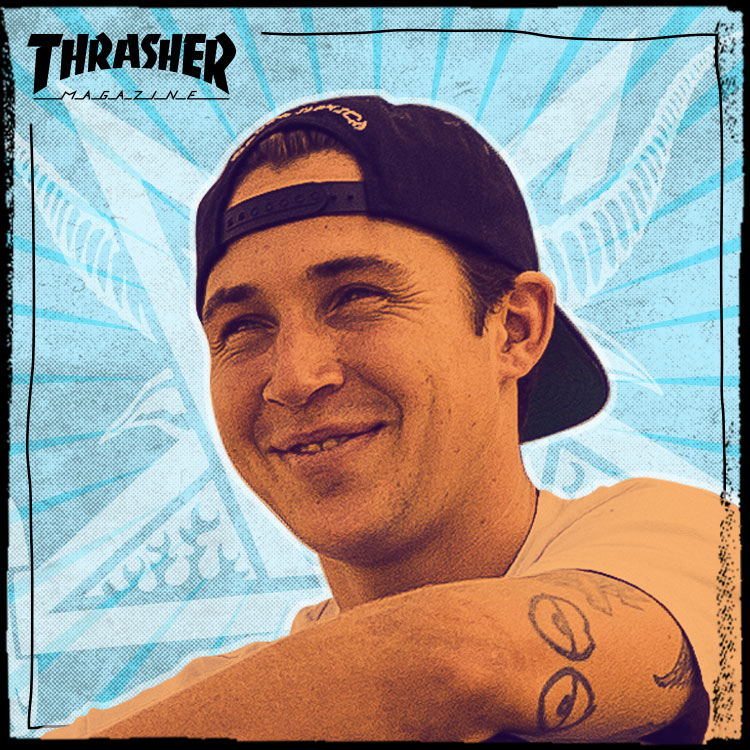 Elijah Berle
Age: 22
Sponsors: Chocolate, Vans, Indy, Spitfire, Mob, Bronson
Home: Santa Monica, CA
Big Moves in 2016: He was ready to go toe to toe with Clint on KOTR, but the real fireworks happened last week when Eli dropped his surprise Vans "No Other Way" part, arguably his gnarliest and most well-rounded to date. Solid backyard pool shredding meets sky-high impossibles and hella burly grinds – and his nosegrind nollie flip on the Sacto bank to bar and Moorpark rail put him in Silas/Malto country. New classics from the last Dogtowner? Discuss among yourselves!
Indelible image: Grind to grind… to grind on Wilshire 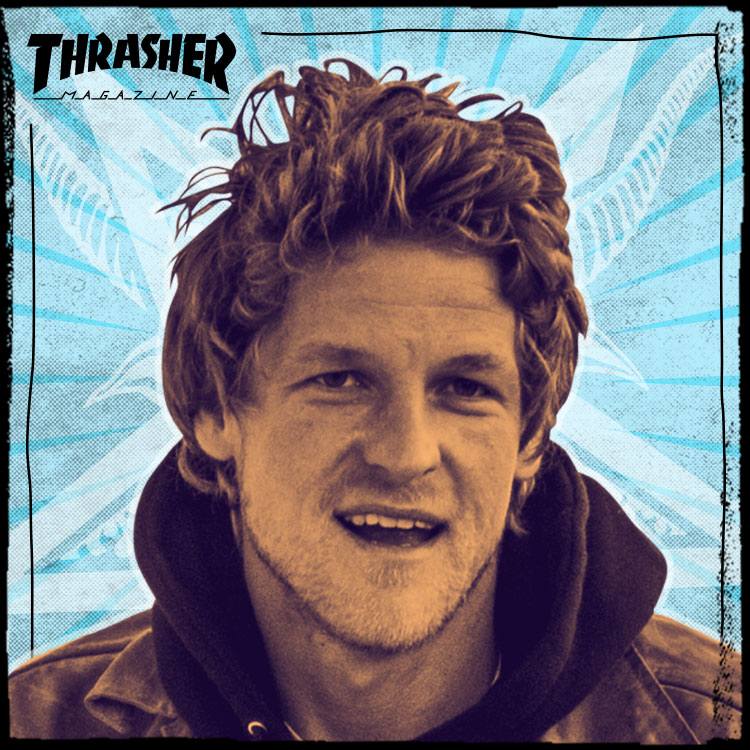 Dennis Busenitz
Age: 35
Sponsors: Real, adidas, Spitfire, Thunder
Home: Sebastopol, CA
Big Moves in 2016: adidas put in work to keep up with the fastest feet in the streets, delivering a two-beat, globe-trouncing, opulently-soundtracked part in "Away Days" showcasing a virtuoso at peak thrust. Full-blast ledge/manny/flatground attack, killer combos and some groundbreaking moves in an oft-ignored discipline, the hippie jump, had the kids shelling out for that digi download. Caught in the rain at China Banks for a Thrasher cover and a full (if somewhat guarded,) interview checked a few more items off our Busenitz bucket list as did the SF-centric "Livewire" part from Spitfire. A quick bio-doc from the three stripers (chronicling Dennis' voyage from humble immigrant to the fastest man in SF,) made this a bonanza year for Busenitz superfans.
Indelible image: Push, push, push, push!

Download adidas' Away Days from the iTunes store here. 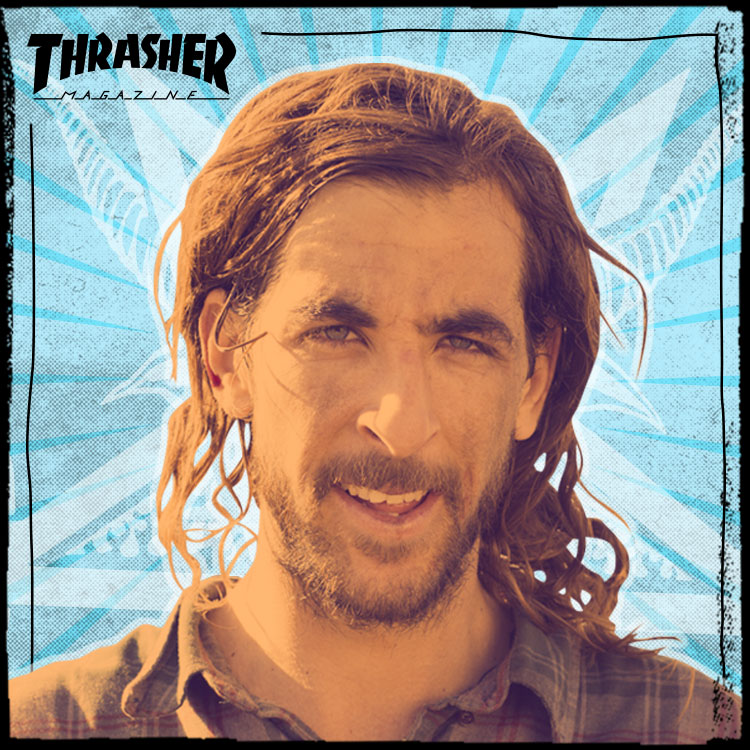 Justin "Figgy" Figueroa
Age: 26
Sponsors: Baker, Emerica, Indy, Active, OJ, Shake Junt, Happy Hour
Home: Oceanside, CA
Big Moves in 2016: Big Fig waged handrail jihad for his "Made 2" part, riding away from bannisters (often backwards) either battered and bloody or in a goddamn ambulance. A litany of skatestopping injuries have haunted him since 2012's "Bake and Destroy" so to have Figgy back on the cover (with his patented crooks grab over) totally shredding is an absolute honor. Switch biggie front board, biggest biggie front board ever and a warrior's stride make him a Thrasher for life.
Indelible image: Breaking the light off the hubba ledge with his ribs

Download Emerica's Made Chapter 2 from the iTunes store here. 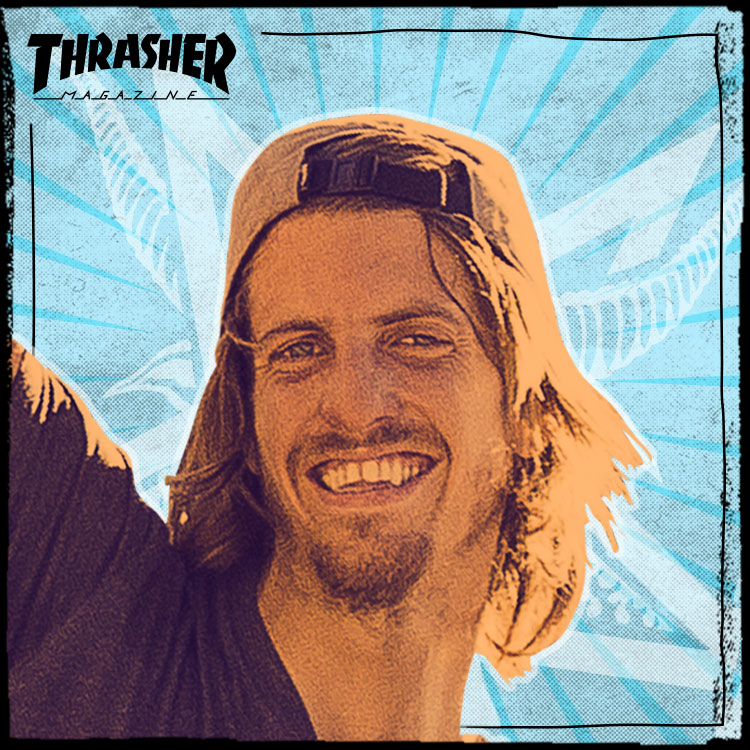 Aaron "Jaws" Homoki
Age: 26
Sponsors: Birdhouse, Indy, AYC, Bronson, Bones, Bro Style, CCS, FP Insoles, Rawr Superfoods, Glassy
Home: Phoenix, AZ
Big Moves in 2016: While TV audiences became acquainted with Arizona's favorite falling star via King of the Road Season 1, (which his team won,) Jaws had already made two trips to Lyon to try his luck at Boulala's great white 25-stair whale – the latter of which made him the title holder of Biggest Drop Ever and earned an insane gatefold Thrasher cover. A full year of stunt work later and Jaws' "Criddler on the Roof 2" part shows he hasn't even begun to plummet. Aaron "Jaws" Homoki is truly a phenomenon. But how much bigger can he go?
Indelible image: Twenty five big ones! 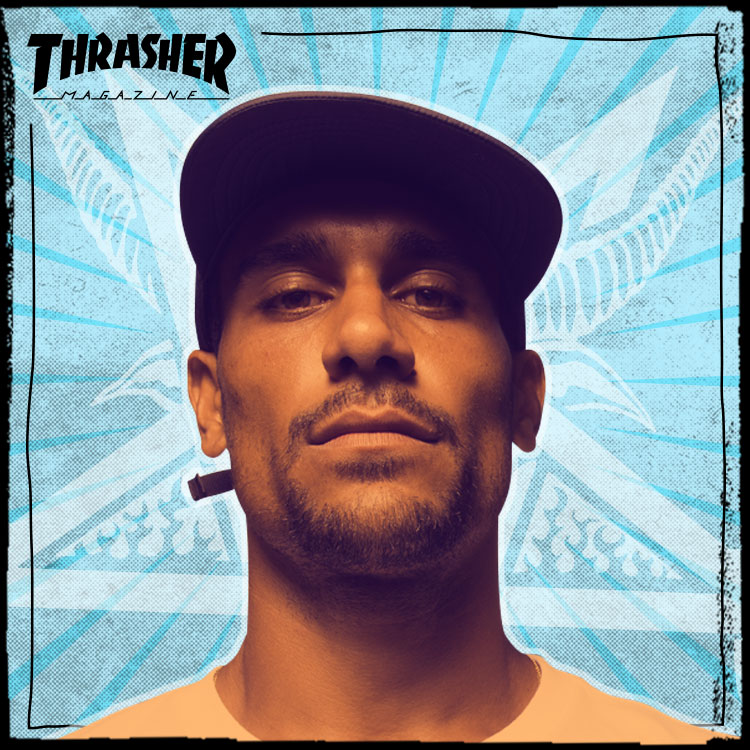 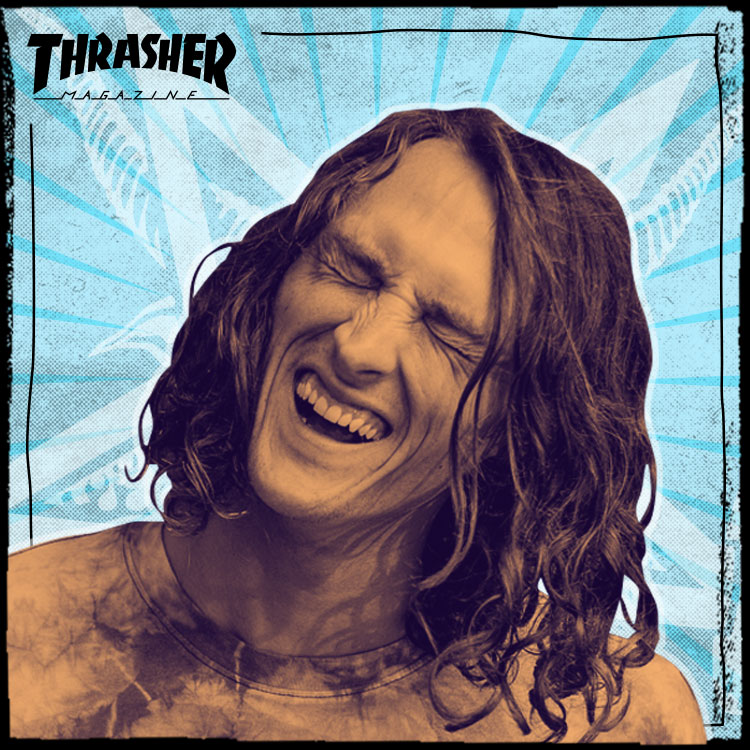 Evan Smith
Age: 25
Sponsors: Element, DC, Indy, Spitfire, Swiss, Gnarhunters, Creative Life Support
Home: Pittsburgh, PA
Big Moves in 2015: Skateboarding's psychedelic scarecrow cranked out videos at a Joslinian pace this year, tossing in homie and shop parts between his epic "Time Trap" and "Zygote" opuses, each colored by the spontaneity of a dude skating on his own terms (or perhaps, in his own universe?) Wildly inventive combinations on all terrain punctuated with unmatched wallride progression – kicky frontside on glass, kickflip backside over rails and even some over-vert urethane assault make Smith one of the few skaters to earn nods from GX dogmatists and 'League-addled stair counters alike. Fucked shit up at CPH and the Dime Glory Challenge with tricks so crazy you had to laugh and scored two amazing Thrasher covers along the way. Whatever Starheadbody is on, we want a hit!
Indelible image: Kickflip wallride, past the rail 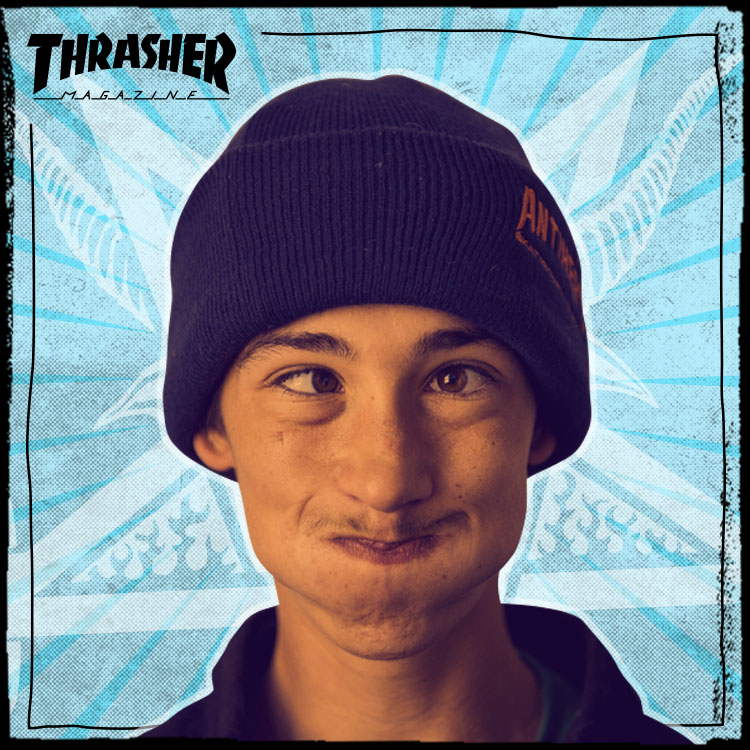 Daan Van Der Linden
Age: 20
Sponsors: Antihero, Vans, Volcom, Spitfire, Indy, Modus, 100% skateshop
Home: Veldhoven, Netherlands
Big Moves in 2016: "Imagine Grant Taylor mixed with Tom Penny," was how we first heard DVL described, and though you may want to add a dash of Cory Kennedy and a six pack of Stella Artois in there somewhere, Daan is definitely one of the most outrageously exciting skaters to roll through the limelight in recent years. And like those first two, elusiveness makes him all the more appealing with his best clips outside of "Holy Stokes!" via the shaky lens and vocal encouragement of our very own Brü-Ray. Sadplants in the same run as a front blunt to fakie 5-0 down the rail? C'mon Tom! A Thrasher cover (in SF!) and a board with the eagle ain't a bad way to start it off either.
Indelible image: Gotta be that H-Wood High Suciu grind 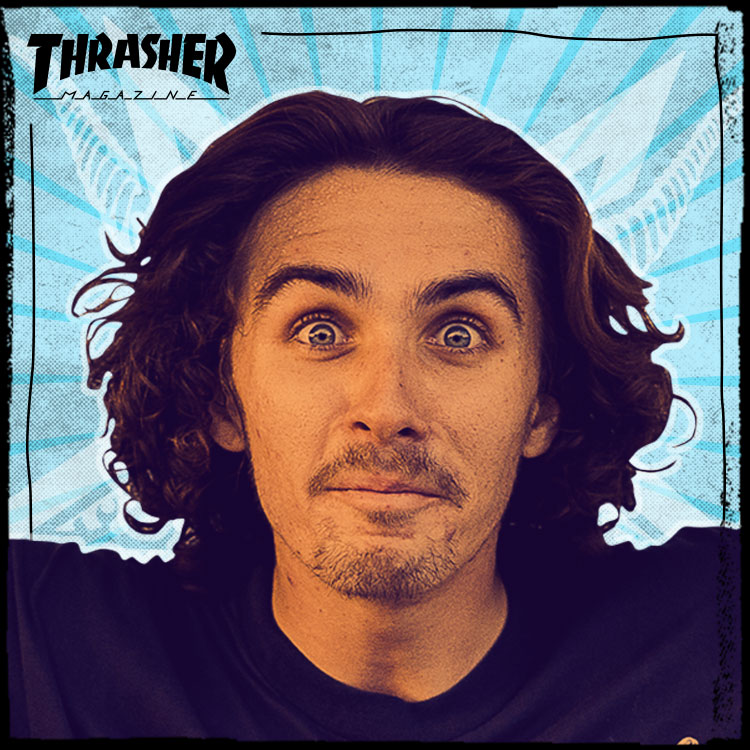 Kyle Walker
Age: 22
Sponsors: Real, Vans, Volcom, Thunder, Spitfire, Active, Happy Hour, Bronson, Monster
Home: Long Beach, CA
Big Moves in 2016: The man from Tornado Alley has a knack for making the most hairball, Muska-busting, after-black-hammer-ass handrails look like your neighborhood flat bar. K Walks took three extra pushes in 2016, dropping a shoe with Vans in a hail of kinks, ripping 'round the world in Volcom's "Holy Stokes!" and grinding out his "Surveillance #2" flick with the Real homies featuring one of the longest front blunts of all time. And then there was "No Other Way." That feeling, that shocking feeling you used to get at the end of big, awe-inspiring skate videos – it's back!
Indelible image: Mountain of kinks … conquered!