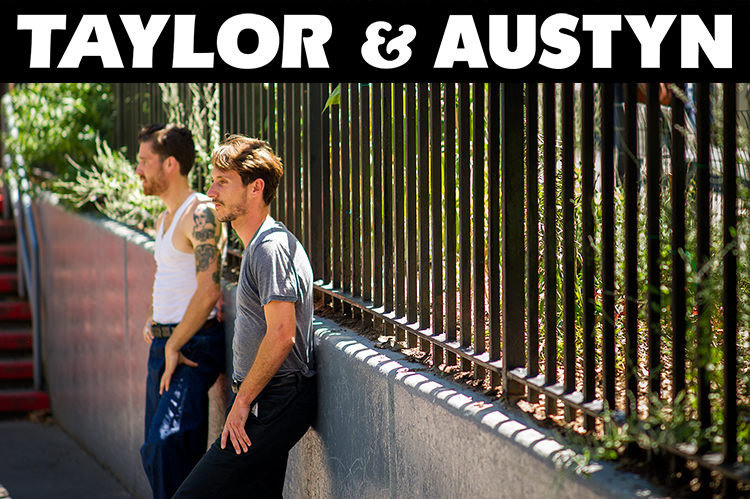 You've surely seen WKND's Who's To Say vid by now. Well after the VX stopped rollin', Grant sat down with the first-part/last-part duo, Taylor Caruso and Austyn Gillette, to talk about food blogging, celebrity sightings and filming for the vid. 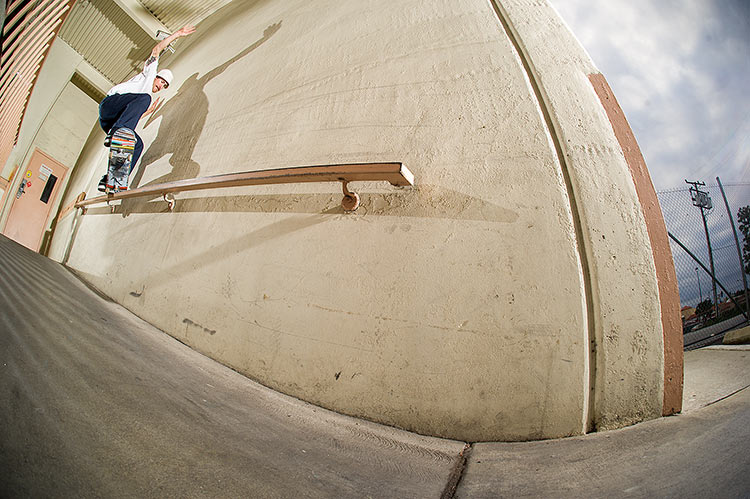 Taylor, shadow dancing with a precarious 5-0

Austyn, where were you last night? I noticed you didn’t come home. I was worried sick.
A: I was on a date with a girl. She’s a food blogger and got invited to this event to eat free food at this very undesirable location on the Westside. We got to stand around, make fun of all these people on their phones taking photos of the food, but then realized that she had to do the same thing at the same time. Yeah, we did that. Had some wine, had some drinks, came home.

Austyn, contributing to the black rainbow with a fakie wallride half Cab out

So she’s like a pro Yelper?
A: No, not Yelp. Big difference in the foodie world. It was, like, five hours of eating for free, critiquing the food. Restaurants have these nights for food bloggers to come and take photos of their food and they feed you all fucking night. You should look into it. If you have more than, like, 5,000 followers you’re pretty much good to go.

Caruso, why did you used to ride your boards backwards? Was it a superstitious thing?
T: Honestly, I just like popping off a bigger tail. I started riding them backwards and then someone was telling me I should just ride them regular. I switched it around, tried to skate this 11-stair handrail and racked it. Tried to front board it and fully sacked it. First time I’d switched it up. So I went right back. But now I ride it regular. Superstitions be gone.

So, Taylor, why’d you film this part with so many people besides me? Can you explain that?
T: Ah, Jesus. I think it’s just because that’s when I bought the VX. At the beginning I bought the VX because with my work schedule and everyone else’s, it just seemed right. When I get one day off, if you’re working, I still want to try and film something.

Austyn, what was the most stressful trick to film for this part?
A: The heelflip. It took four years.
T: Four years?
A: Well, I tried it once. Then I moved to New York. Then came back to LA, had knee surgeries, couldn’t jump for two years. And then we went back, like, four times to get it, in the morning. You can only skate it from 7am until 8:45 or so. Pretty small window. The owner’s car was always parked in the way. Remember we had all those ideas to prevent the car from being parked there?
We were going to ask the owner if he'd be interested in selling it and tell him we needed to test drive it at 7:30 am before work. You wanted to get on the roof and drip fake bird shit down so he'd never park there. Zac [Gracie] wanted me to put a fake love letter on the windshield saying something, like, "I've noticed you. You're so hot. Meet me at 8am at this breakfast spot."
T: Ha! Oh my God.

Taylor, what was your work schedule like while filming for this part?
T:  Dude, six to seven days a week. Either working at the store [County Ltd.] or working valet. There was never one full day off. Maybe a Sunday here and there. Sober Saturdays that led into Zero Sundays [skating rails].
A: Ha! Disco…
T: Sometimes big disco Saturdays to Zero Sundays. Well, zero-trick Sundays. 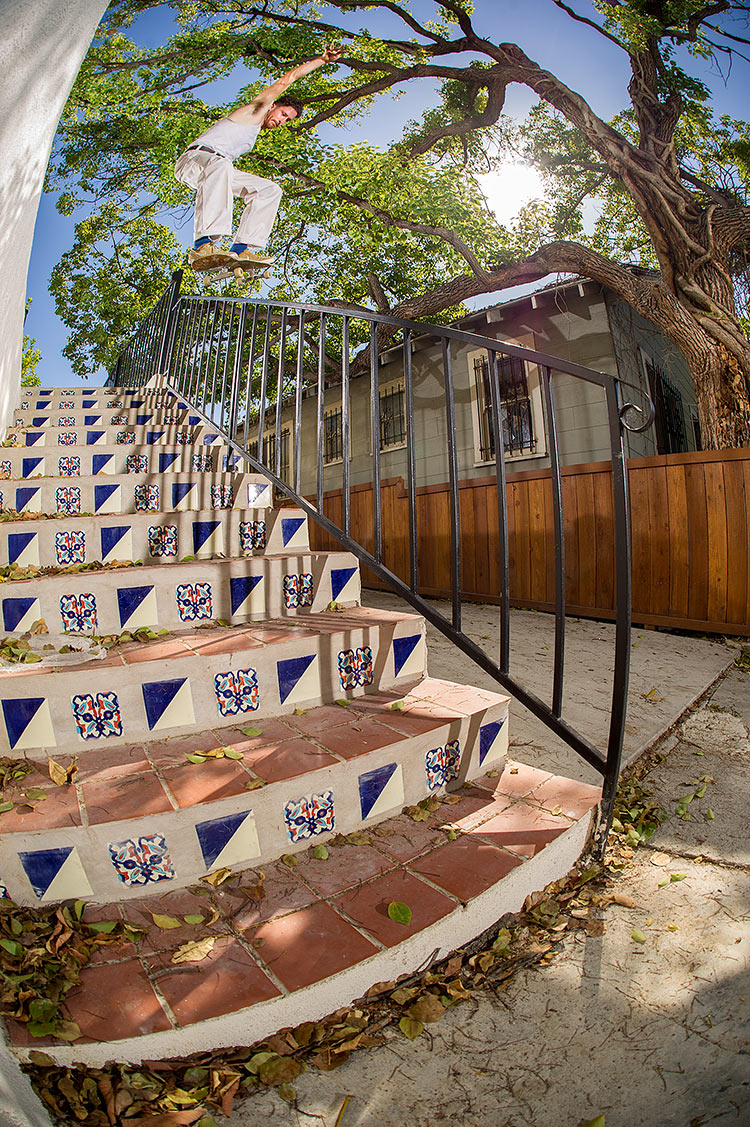 Did you ever call in sick because you were broke off from a trick?
T: No, never called in sick from being broke off. I’d just show up late if I had to land a trick. Even if I got broke off, I’d still be working. It was awful.

What trick made you the latest to work?
T: The 50-50 curb check. After getting smoked. Oh my goodness.
A: Twenty minutes?
T: No, like an hour late.
A: That is not good.
T: I got smoked.

I was contemplating telling you how late you were, for motivation, but I didn’t want to stress you out. I ended up just telling you anyways.
T: I hadn’t even tried it yet at that point. Just rolled up for like 30 minutes. But when you told me, I got stoked. 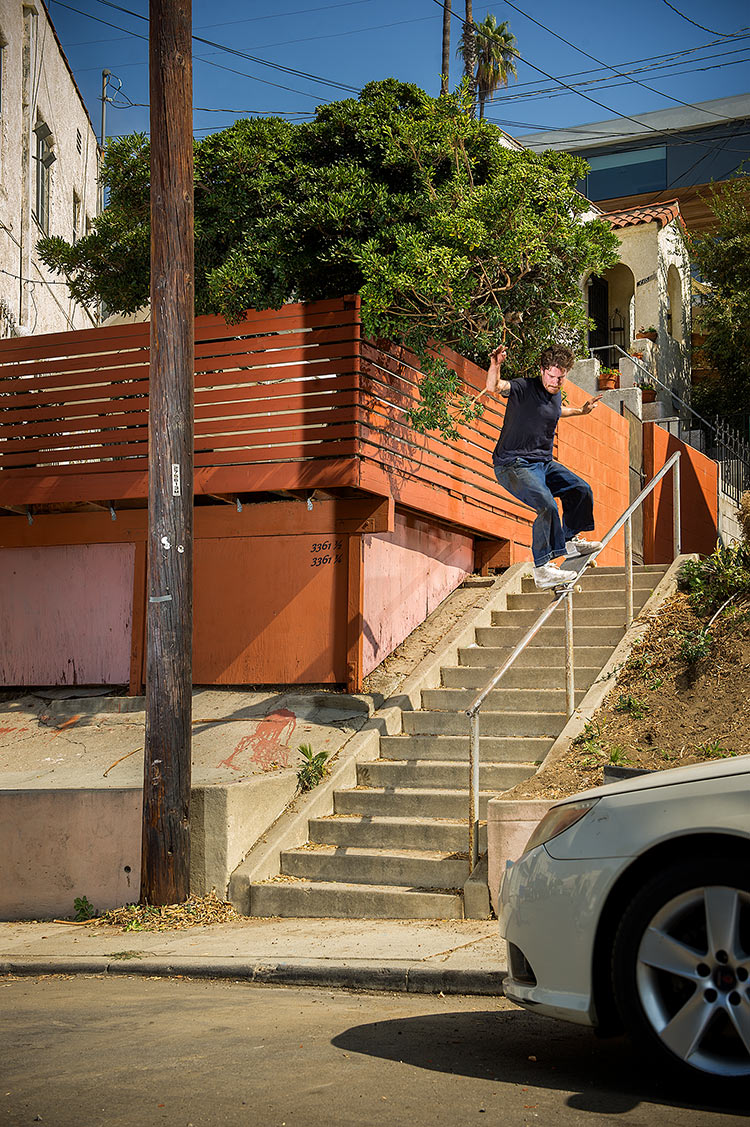 Taylor, 50-50 to curb check—definitely worth being late to work for this one

When you showed up late that day, did you get caught at the store?
T: Actually, all of the partners were out of town. I was the only one there to work the store. But we had to do what we had to do. I didn’t even get to shower. I was covered in dirt, hurtin’ and showed up to the store stoked because I’d just landed the trick. I checked my phone and my partners had called and texted, like, "Are you at the store? What’s going on?" And there was a customer waiting outside that had hit up the other guys wondering what was up. Freakin’ ratted me out.

Austyn, remember when we dug out that whole side yard so you could feeble that ledge.
A: Oh yeah, when Camille Rowe pulled up.

Yeah, and you swept her off her feet. She looked over and I was just sitting there in a gutter on the street, in an oil patch filming you thinking, “It must be nice.”
A: Yeah, she rolled up in one of those fancy Uber cars. I gave her a hug and told her, "Get outta here. I’m workin."
T: Damn, kid. That’s bold; that’s bold. 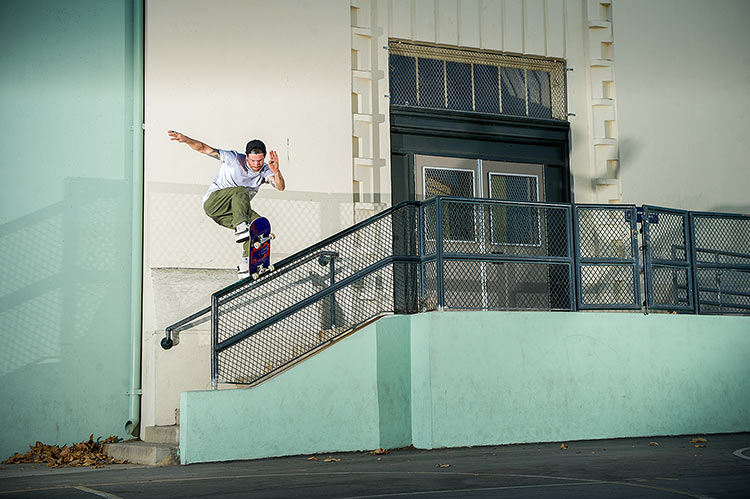 Chicks dig front blunts too. Taylor, hits a high one

Austyn, did you feel like we were budget filming a VX part?
A: I always feel budget, but VX makes everything look more natural somehow. I don’t know why. With HD, the wider lens, it just makes you look like you’re going slower. But a VX is, like, oh, now it looks like I’m going way faster—how it actually felt. It’s a pleasure working with you with the VX.

What’s your favorite trick in each other's part?
A: That line: the wife beater, the heelflip, the lipslide down the hill—that line’s hot, kid.
T: Oh yeah, I went out on my bike and found that spot. We filmed it, and a week later somebody had moved into the apartment. Couldn’t skate it anymore.
A: Perfect scenario.
T: For you, my favorite trick is probably the switch tré. For sure. Wish I was there for that one. You made it look so good. 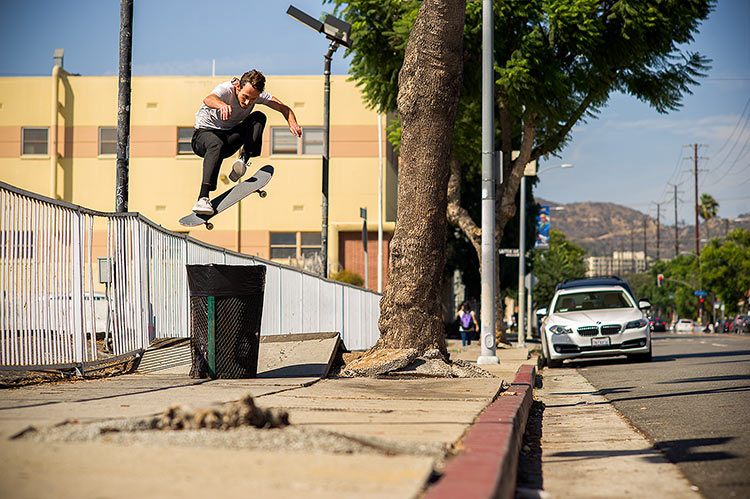 Austyn, after editing your part, I noticed almost every trick was a two-dayer. I don’t think you landed anything the first day.
A: That’s how you know you’re getting older: tricks take longer.

Alright, last question. Can you say one nice thing about your teammate?
T: Uh, Austyn, you smell nice.
A: I like Taylor’s huaraches. Those shoes.
T: Huaraches? I always thought that was a drink. Like horchata.
A: I don’t know. I just fuck with Big Disco.

If you watched the vid, you know the whole WKND team makes an appearance in the montages. Here's some more photos of the dudes for your viewing pleasure. 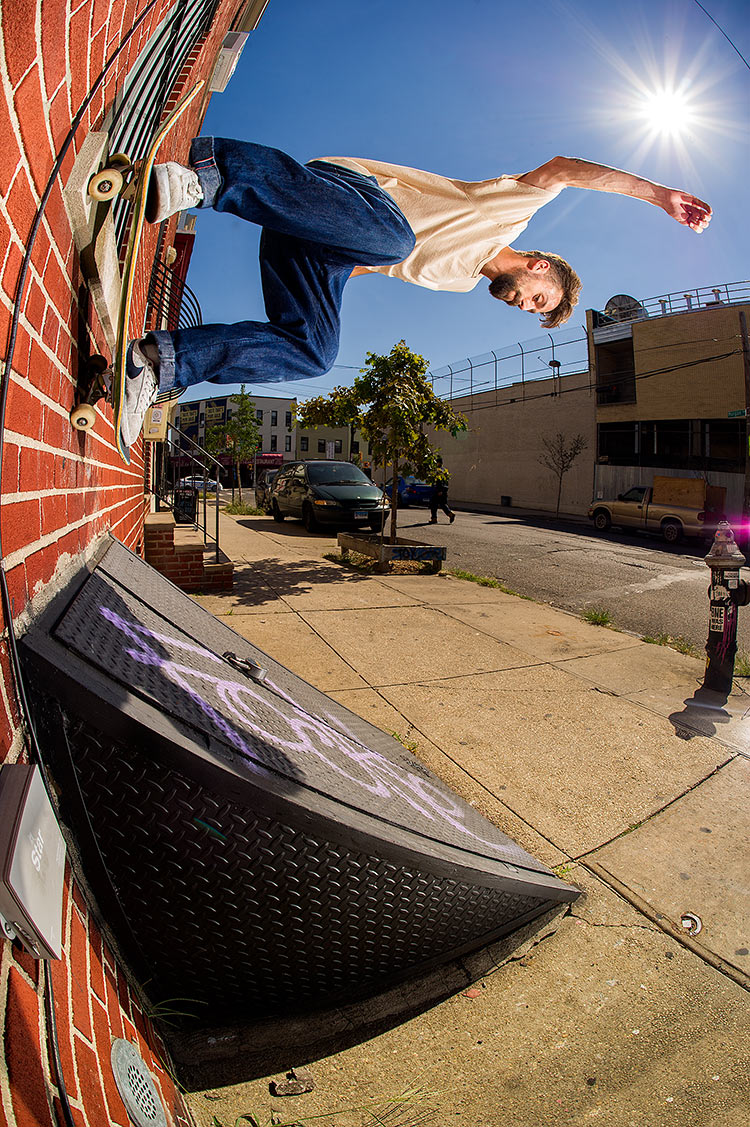 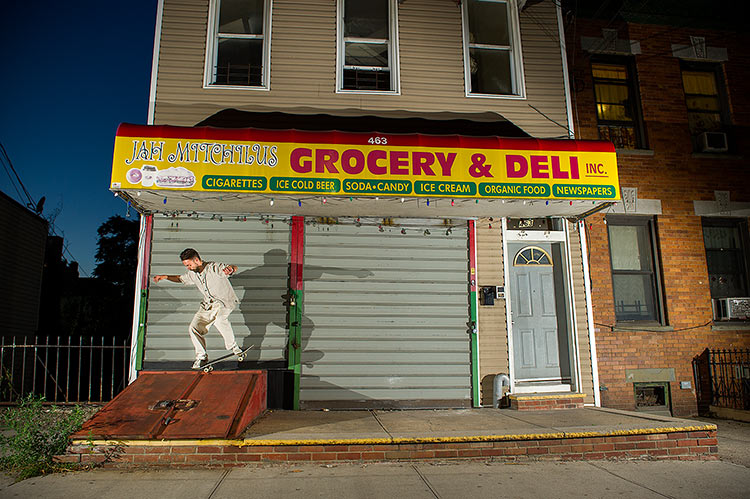 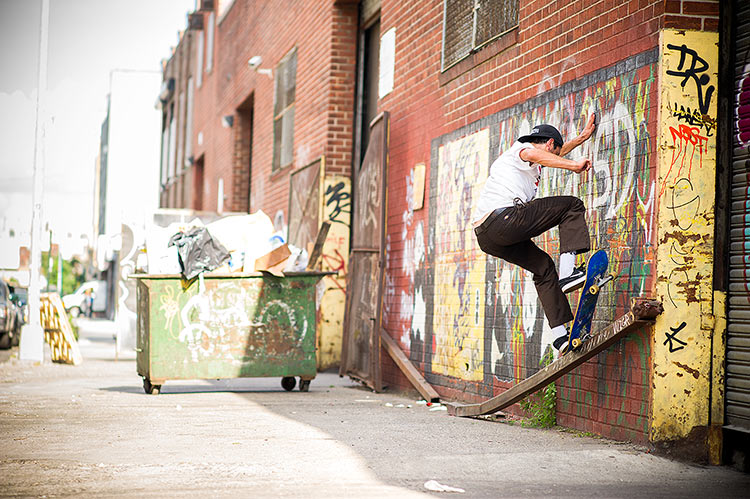 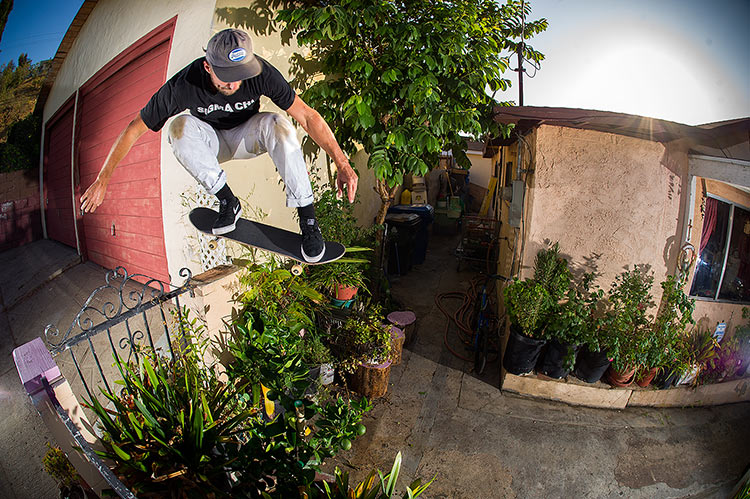 Andrew Considine used to have dreadlocks and apparently he's still a hippie at heart. Plant-powered plunge into somebody's patio 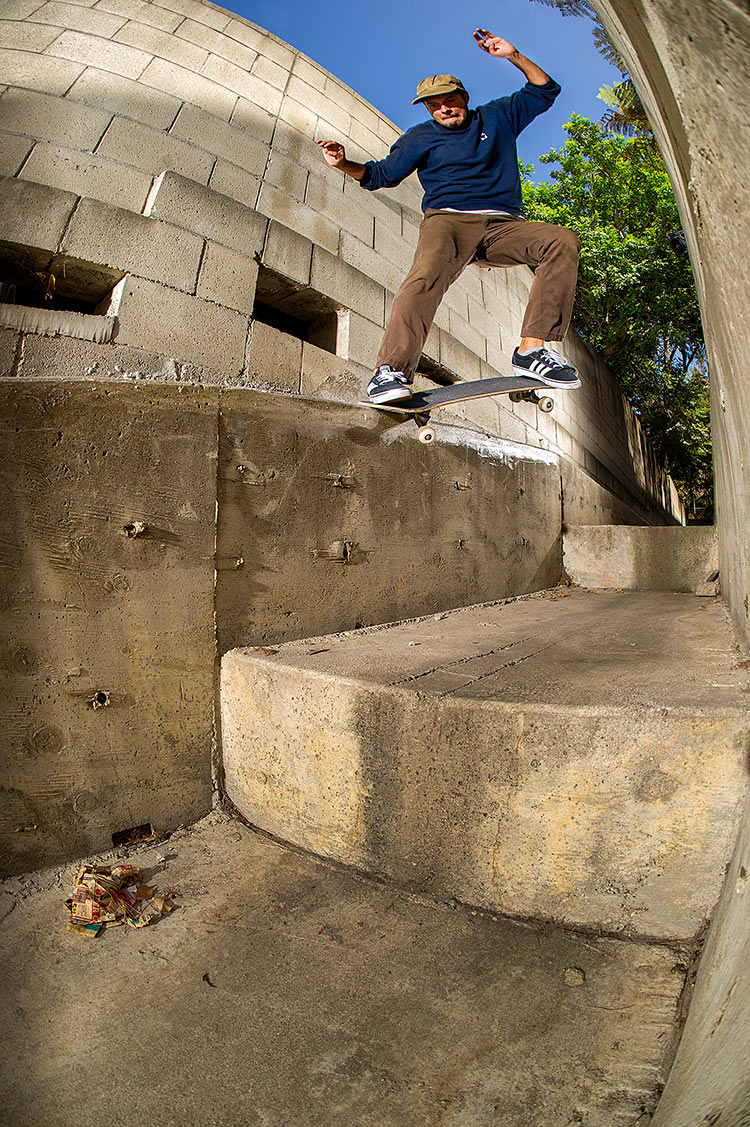 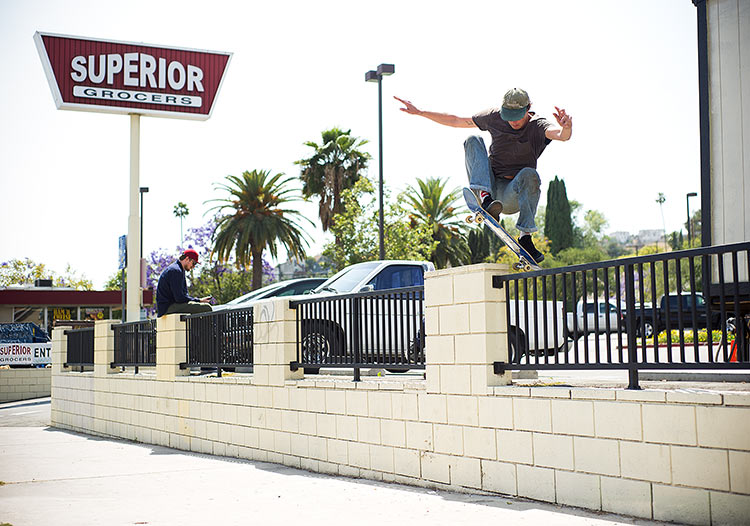 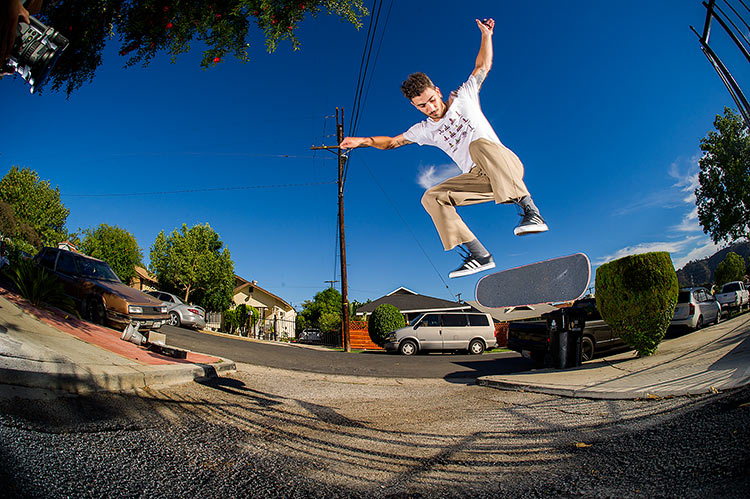 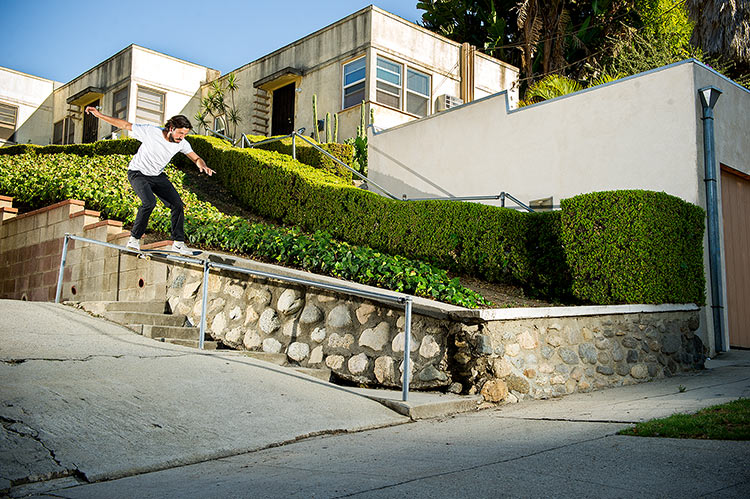 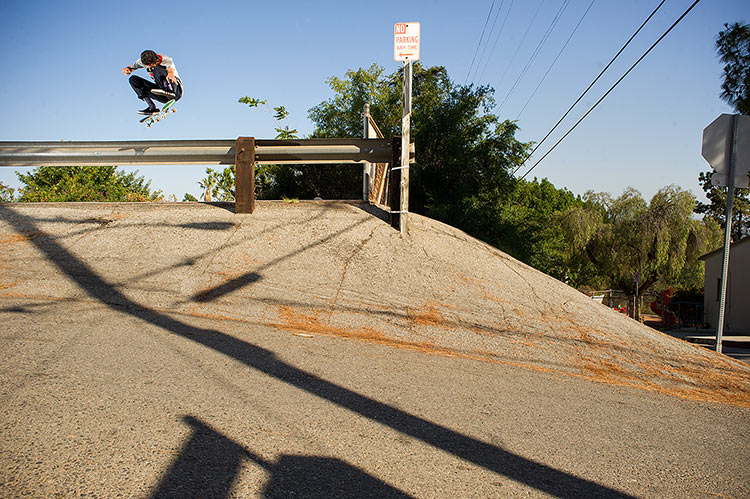 Fakie 50-50 fakie flip out? No problem for Maalouf. Just had to put a little more spinach in his pipe 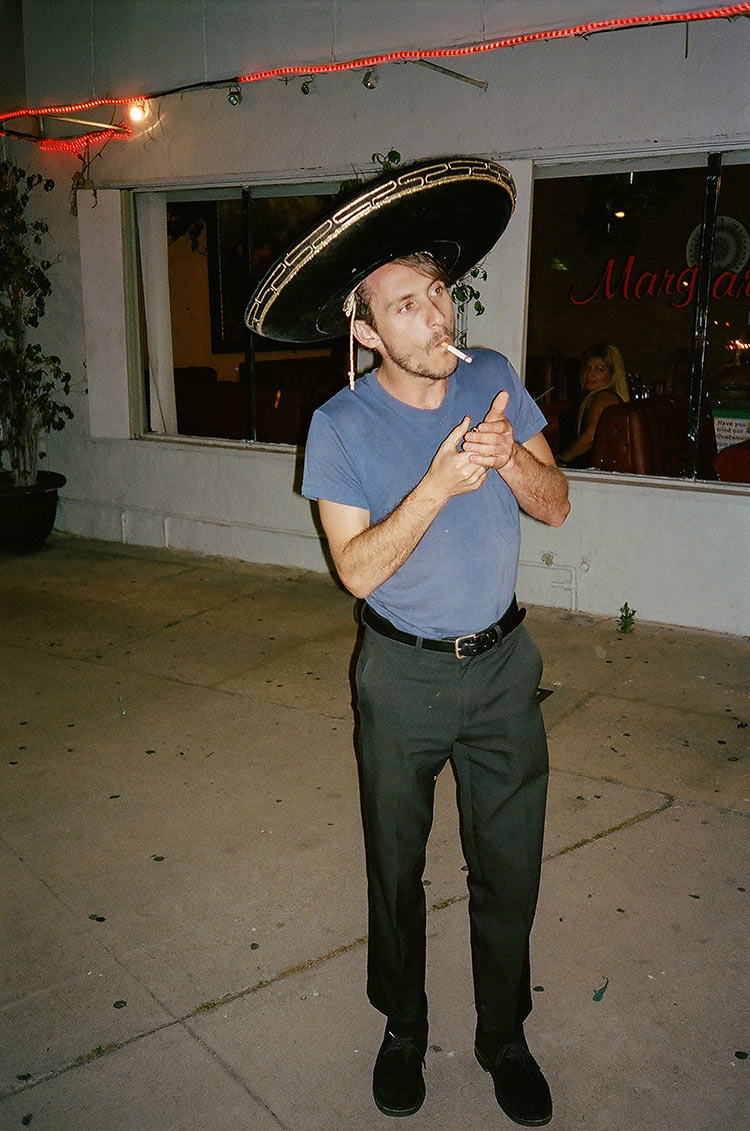 Until next time, adios, amigos. Have a good WKND!