If Brian Anderson back lips a felled tree in the forest, does it make a sound? 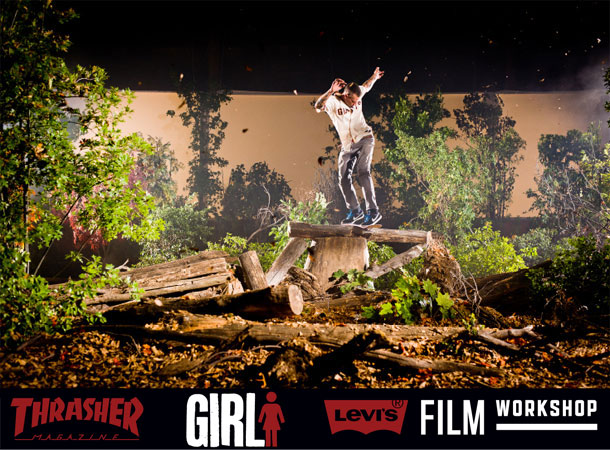 The 3D glasses that are included with the August mag are for the viewing of “Unbeleafable,” a 3D skate film collaboration between Levi’s and Girl Skateboards. Using resources from the Levi’s Film Workshop, the short was directed by Ty Evans, who shot the footage with a Phantom 65-Z3D camera and a pair of RED MX cameras on a beam splitter. “Unbeleafable” is the first skate film to be released in both anaglyph (red/cyan) and full-color 3D versions.

Ty and crew imported an assortment of foliage and flora—including tons and tons of leafs—onto a soundstage, where they set up a supernatural fantasy world of skate obstacles for the dudes to get woodsy on. Alvarez, Koston, Tershy, Jeron, Justin Eldridge, Chris Roberts, and Kenny Anderson (the whole thing’s kinda reminiscent of Rick Howard’s nature runs in “Mouse,” come to think of it) are all featured along with Brian in multidimensional
glory.

And yeah, to finish the first thought, it does make a sound. The film is tracked to the music of France’s M83, whose exclusive electronica cinescape tones add to the etherealness of it all. Park those glasses on your face and get ready for a ride at www.unbeleafable3d.com. —Anker Staem