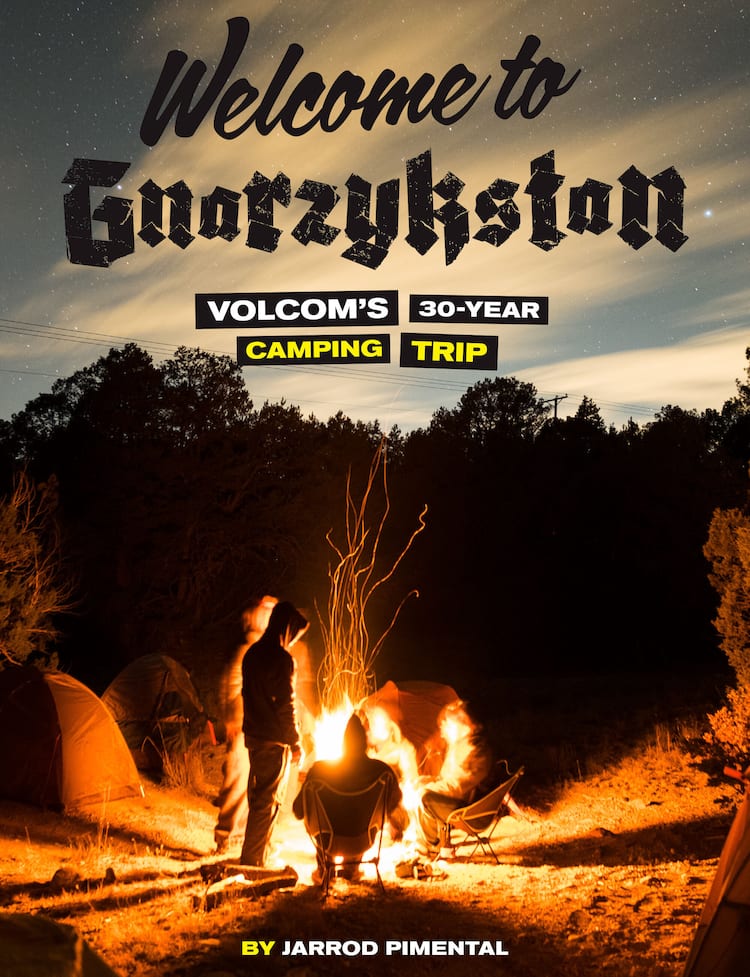 We were dreaming of Airbnbs in Mallorca. We envisioned rolling on marble in Paris. We hoped to be crushing some concrete Down Under. For Volcom’s 30-year anniversary trip, we assumed we’d be going someplace epic. Unfortunately, the COVID pandemic was still raging and travel was restricted, so we had to hit a hard reset and take it back to the basics—sleeping in the dirt on the side of the road and loitering in the Southwest US. But hell, after how awful 2020 had been so far, we welcomed any type of trip. Freezing temperatures and a chance of precipitation every night? YES, PLEASE! Sign us up. Grab some firewood, fill up the coolers with beer and let’s get the hell out of Dodge. 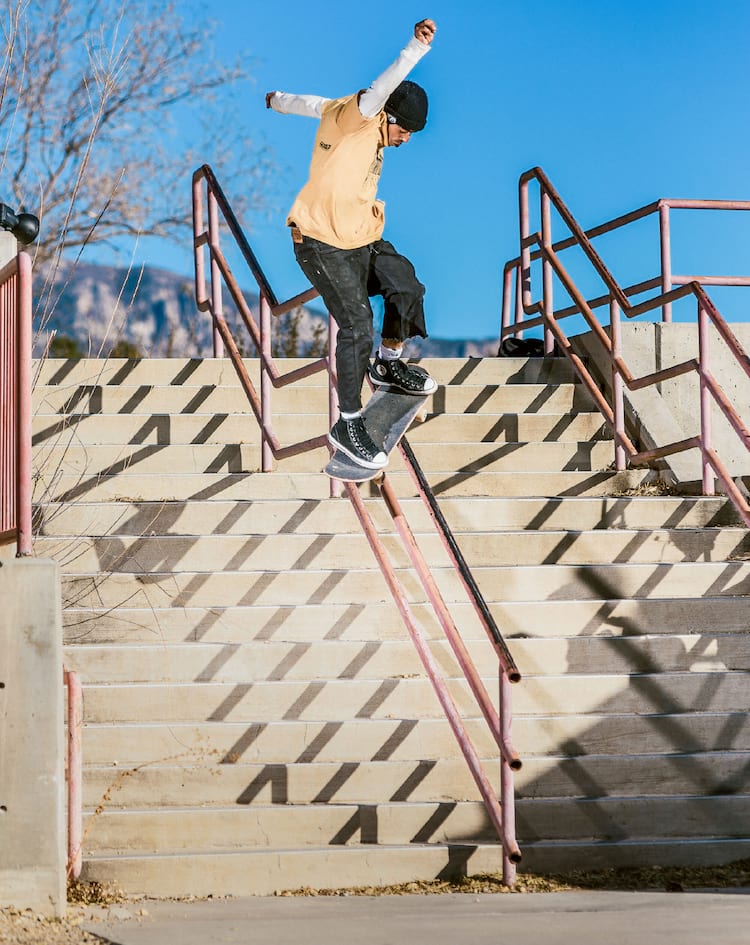 Gap to Smith in ABQ, SOTY season is year round for Milton Martinez     Photo: Cabral 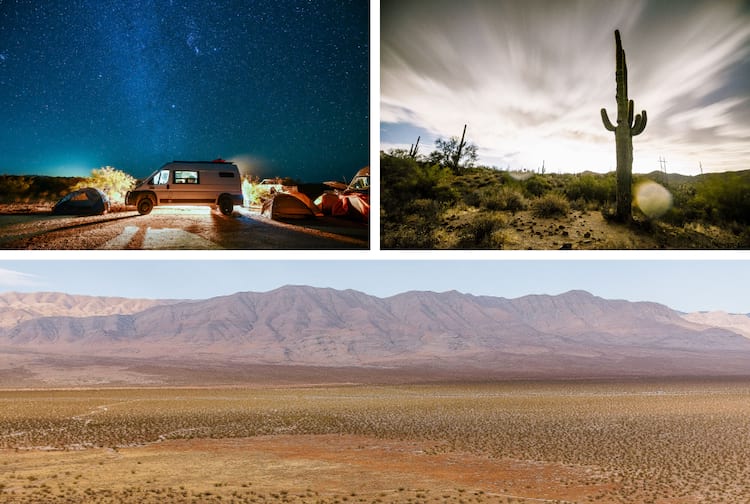 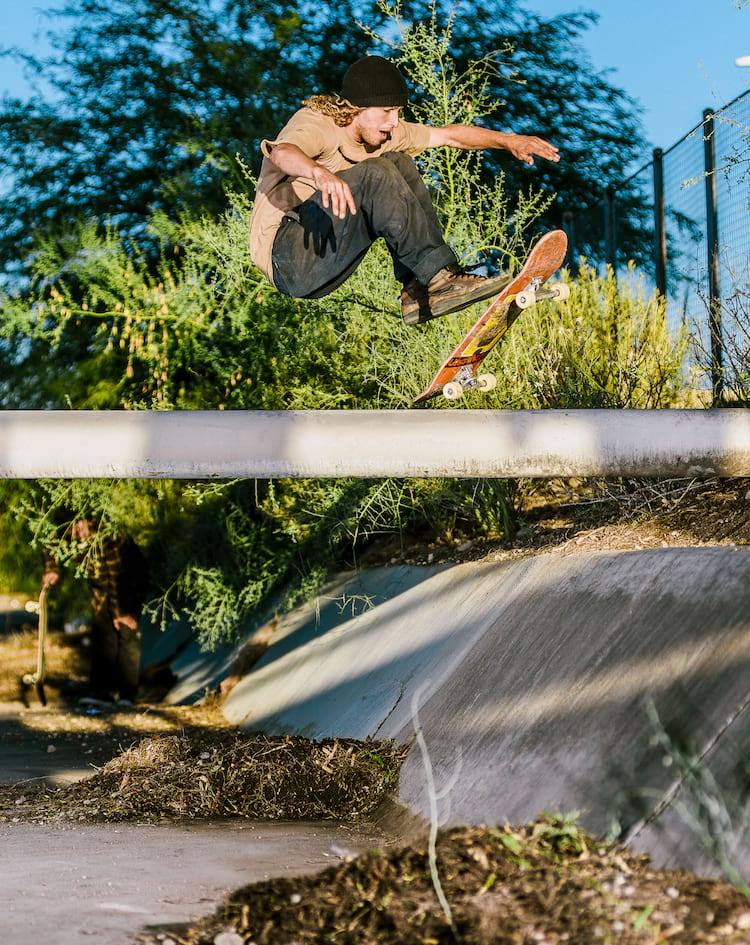 Many trips are a slave to the schedule and between signings and demos it can be hard to find time to actually do the darn thing we set out to do—street skate. With shops closed due to the pandemic and public gatherings prohibited, we were free to keep the calendar loose. Remy Stratton pinned out a 2,000-mile loop starting at Volcom’s HQ in Costa Mesa, CA, meandering through the Southwest’s high desert and back. The plan was simple—for 15 days we’d connect the dots between the SW’s major cities, skating by day and camping by night. Aside from a few must-hit spots, we kept the itinerary intentionally vague, giving us the opportunity to scout out new terrain, linger in places we were hyped on and moving on from areas that sucked. Sometimes no plan is the best plan. 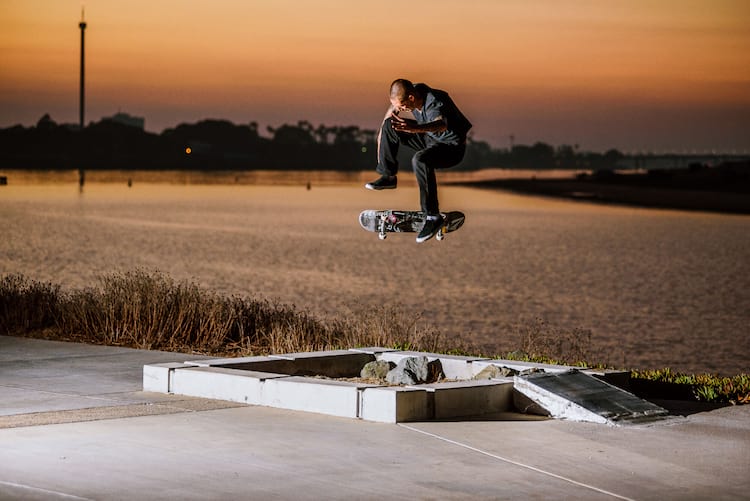 Collin Provost provided us with a pre-departure hardflip in SD for the sendoff      Photo: Cabral 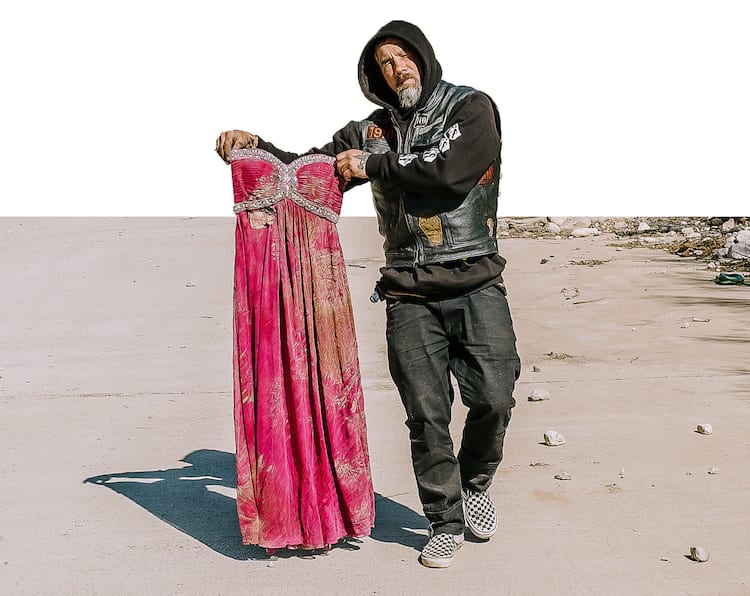 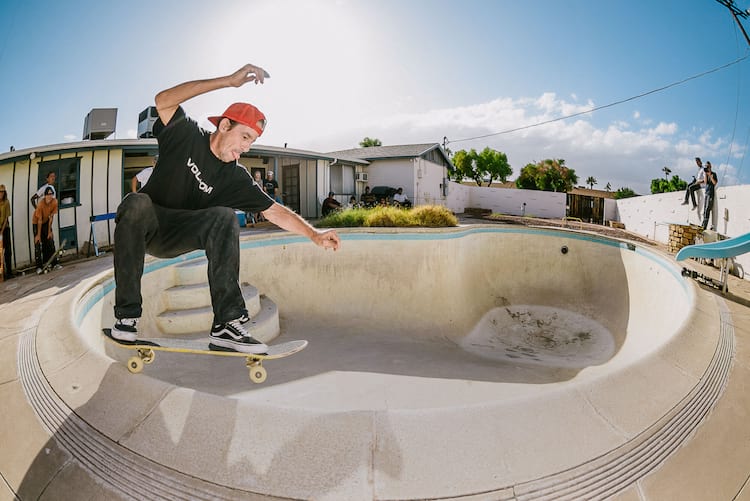 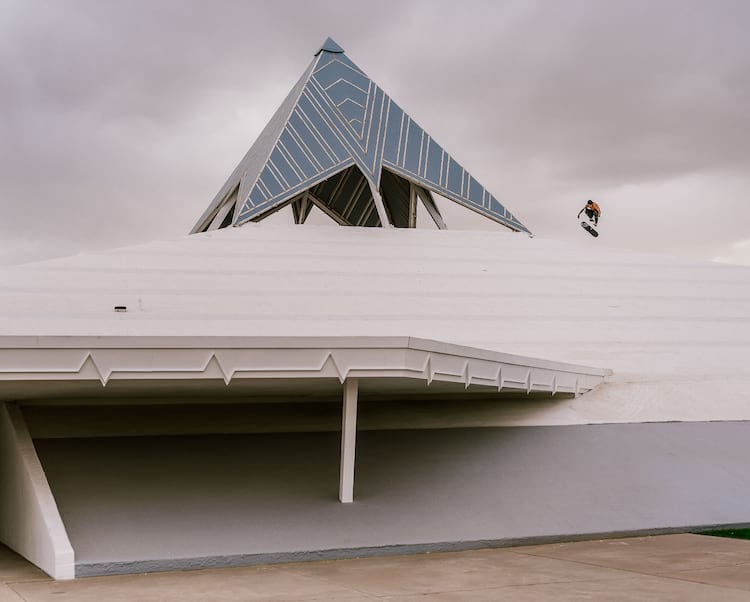 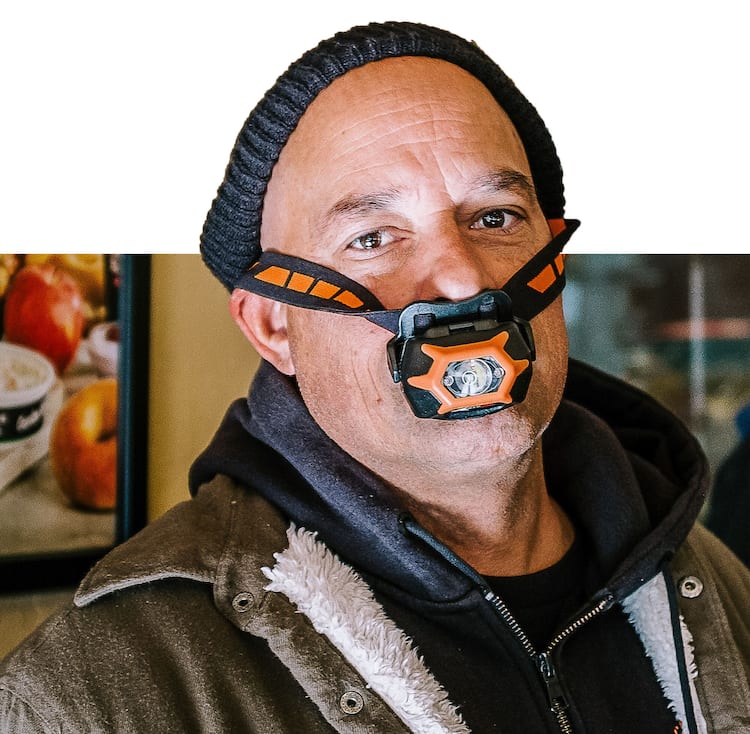 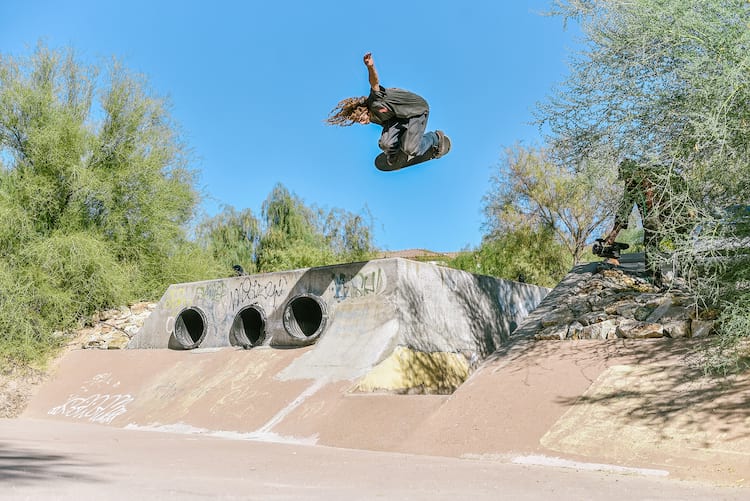 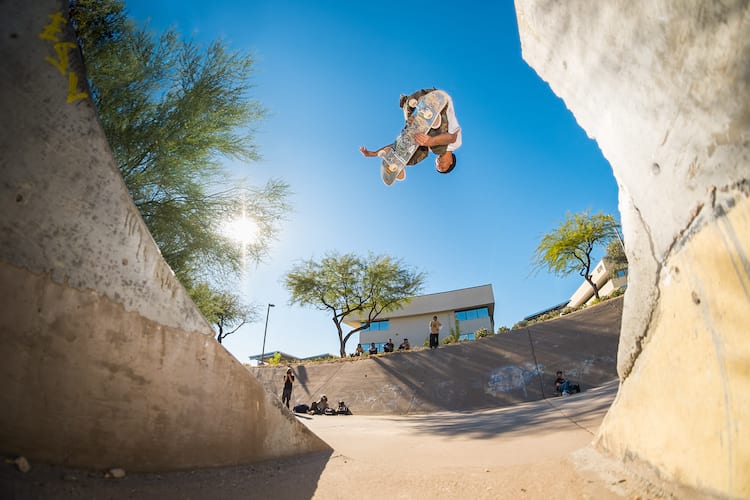 And Tom flies the same path with an Indy    Photo: Pimental

Nobody was too concerned about roughing it on this trip. Hell, Simon Bannerot even slept on the ground for the first week before mentioning that he’d like a buffer between him and the cold dirt. His solution: three doormats from a dollar store. We offered to take him to REI to buy a sleeping pad but he insisted he didn’t need anything fancy. The lack of amenities didn’t seem to slow him down one bit. In fact, we had to set time limits for him at skateparks because he can seemingly film an entire video part at any park you take him to. The dirt life was a little tougher on us older guys, but it worked out in other ways. As Omar pointed out, “On most trips you go back to the hotel at the end of the day and ice your injuries. Out here, it gets so cold at night that you’re icing your entire body!” 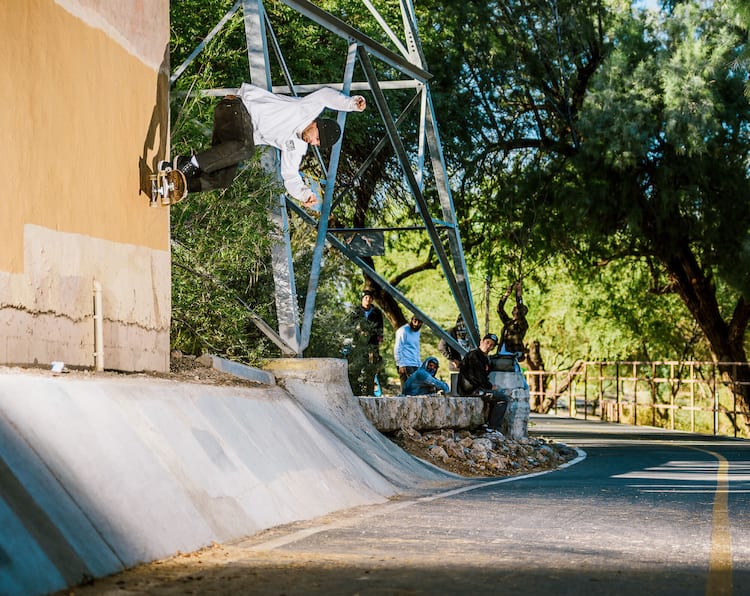 Suski’s been waiting years for somebody to handle this gap to wallride. Milton makes dreams come true     Photo: Cabral 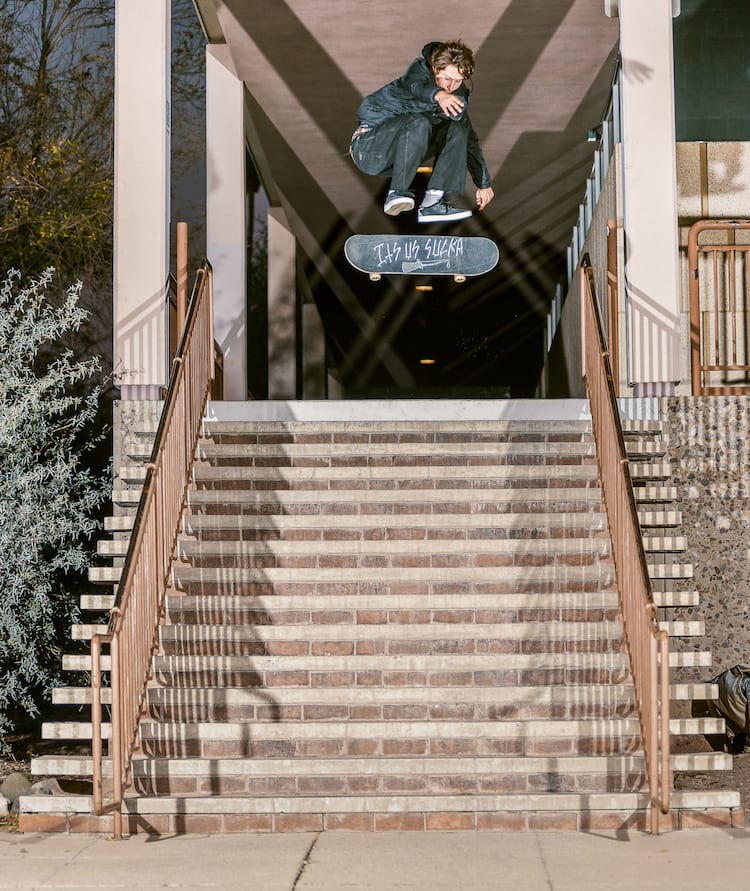 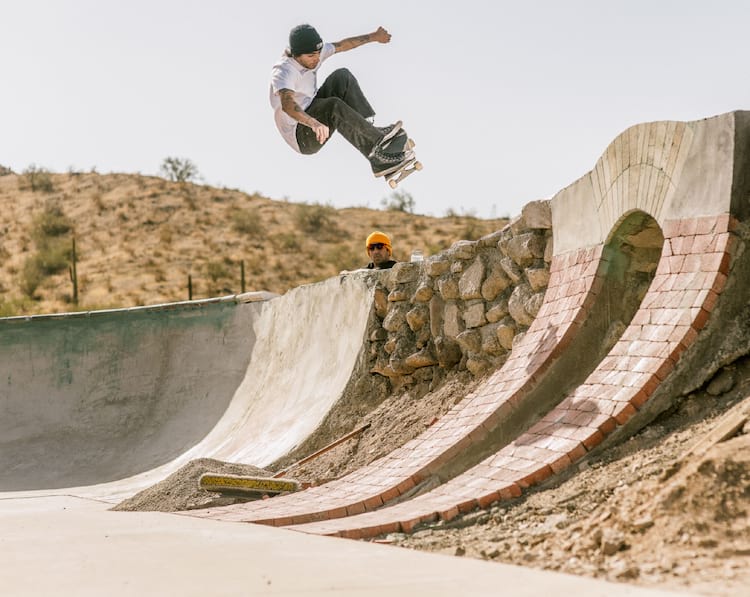 City camping is tough. Even the most discrete campers are usually spotted and quickly sent packing, and with 17 people in tow, finding an urban campsite near Phoenix was going to be tricky. Luckily, we got intel on the Hellfire DIY and Brandan Smith, the head builder, told us we could post up and stay for as long as we liked. The place was perfect—it was remote, there was plenty of room for our tents and vehicles and it was the only campsite we hit that was also a skate spot. Hellfire is located directly under some high-tension power lines, though, and the constant buzzing sound had us all Googling “power lines and cancer” to see if we were being poisoned by radiation. We found no conclusive evidence, but CJ was blasting airs in Phoenix higher than anywhere else on the trip—we thought maybe he was electrically charged. Thanks for the hospitality, Hellfire homies. 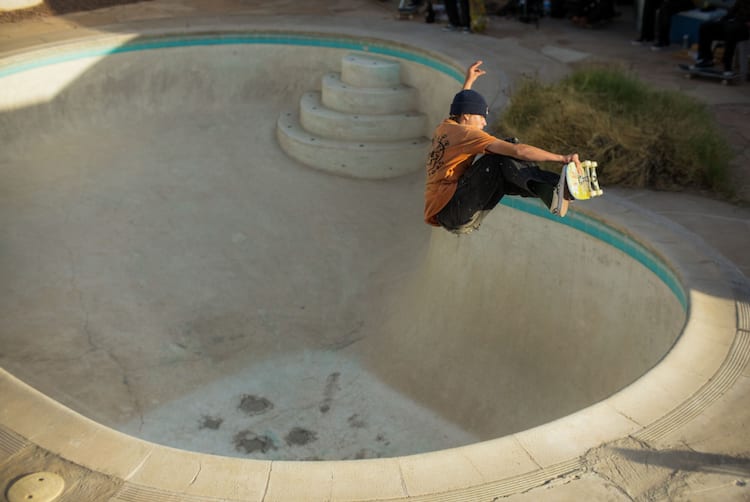 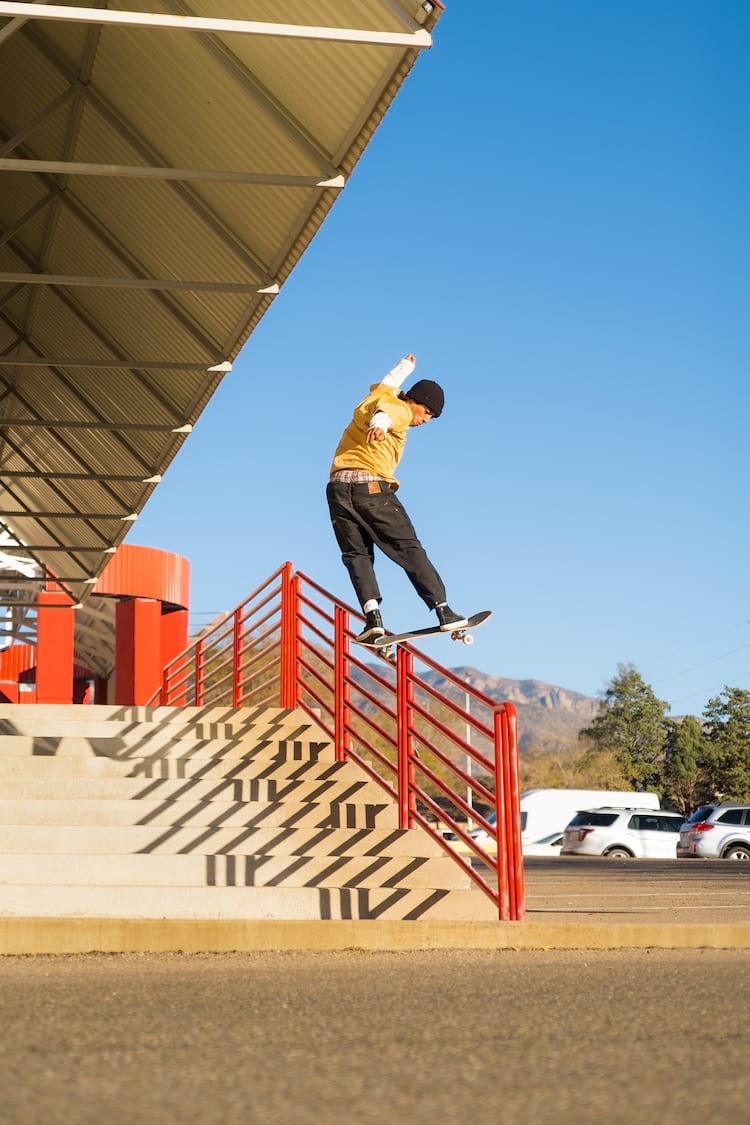 Milton conquers another kinker with a fast front board in NM    Photo: Pimental 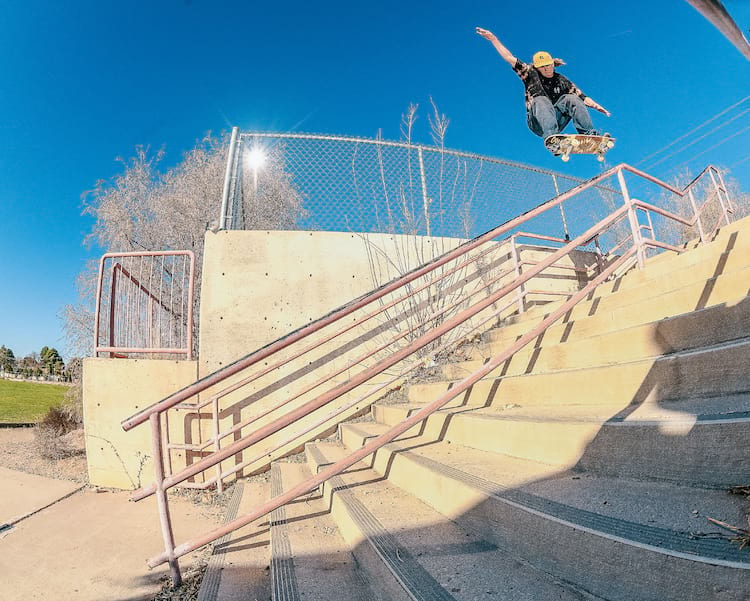 Albuquerque is a must for any skate/camping trip—the amount of spots is startling, there’s a mountaintop campsite 20 minutes outside of the city and, c’mon—Indian School ditch! That downhill chute is one of the most epic spots on the planet. We not only celebrated Volcom’s three-decade mark, but Tom Remillard also turned 30 while we were in ABQ and it was for sure the best day of the trip. To kick things off, Mathias Torres rolled Tom the biggest banger ever and then we got straight to work, putting check marks next to the gigantic list of spots that our guide Jake the Jeweler compiled. Milton slayed everything we hit—the crazier the terrain, the less he hesitated. We pulled up to one mammoth ditch that was kinda fucked up and before Jake could even attempt to patch it, Milton ollied into the beast. We didn’t even have a chance to set anything up—he just handled it first try. All day until dark, the crew was firing. It was a hell of a dirty 30 for Tom “Not So Grom.” 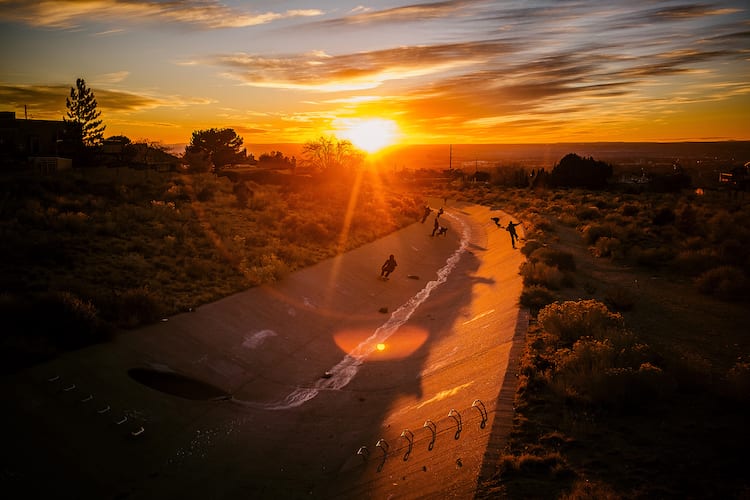 Indian School Ditch, what a sight to behold    Photo: Remy 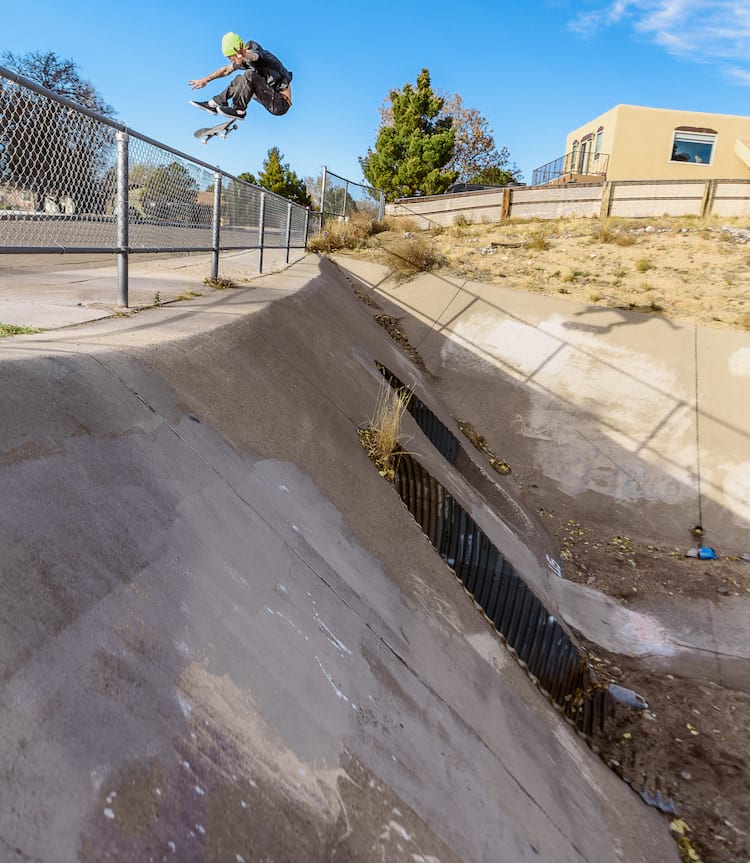 King of the fly out—this spot was on Provost’s hit list and the frontside flip didn’t stand a chance     Photo: Cabral 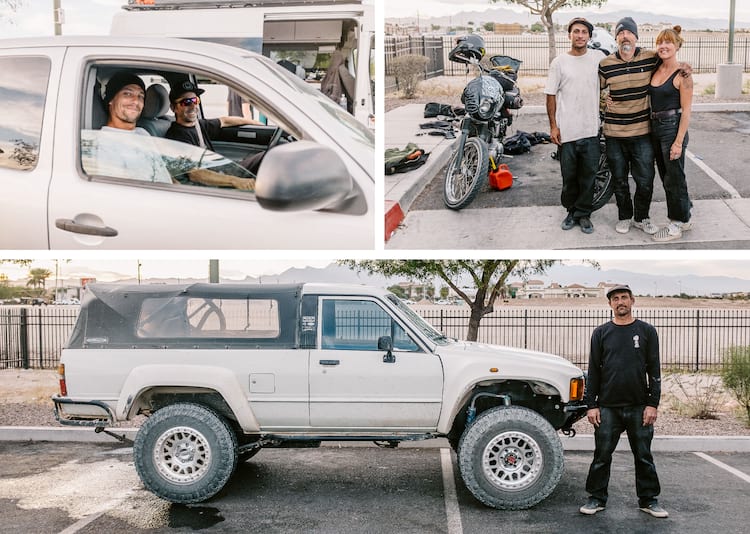 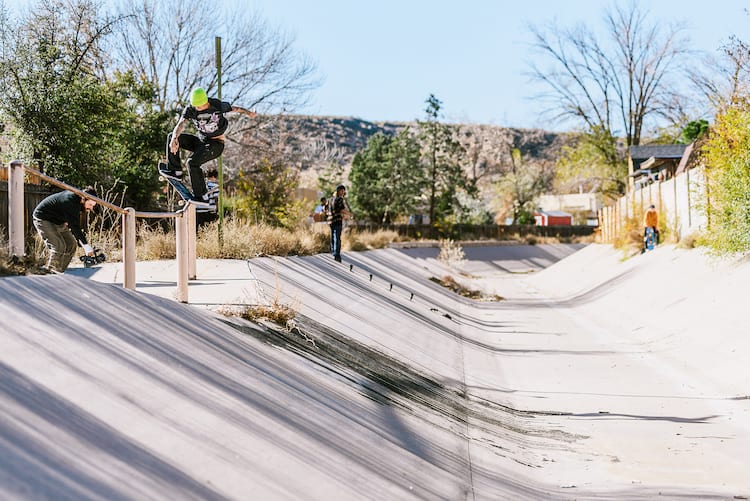 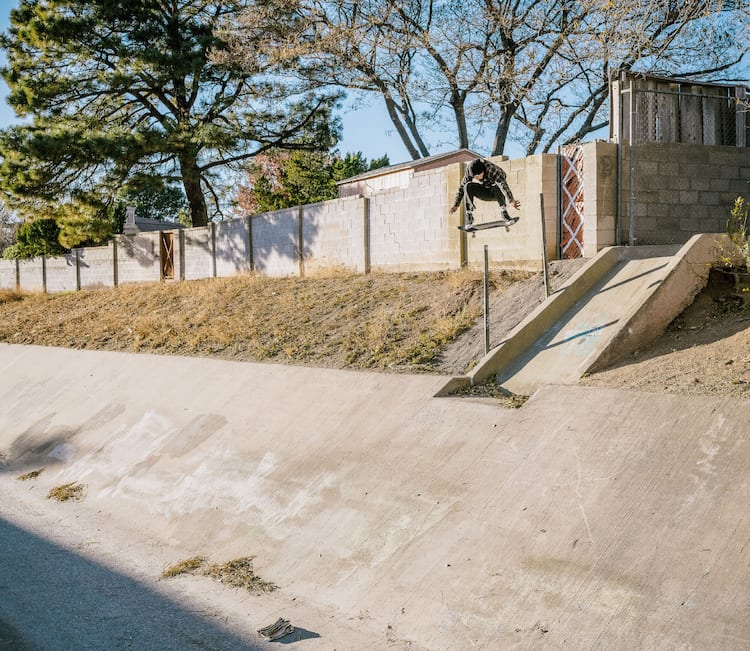 Straight out the van and into to fire—Milton smoooked this ollie before we could even set up the flashes     Photo: Remy

Wheels falling off the van, trespassing and camping on private property, run-ins with the law, spelunking in the Apache Death Caves—this trip was just the excitement that we all needed after being cooped up during quarantine. As we rolled back into CA, our caravan parted ways and we all said our goodbyes. Everyone was exhausted and eager to get back home, but as soon as the dirt was washed away and the bags were unpacked, the group chat chimed: “When’s the next trip?” I’ll tell you this much—we sure as hell aren’t waiting for Volcom’s sporty 40 to get back out there. The dirt life is calling and we’re always ready to fire it up. 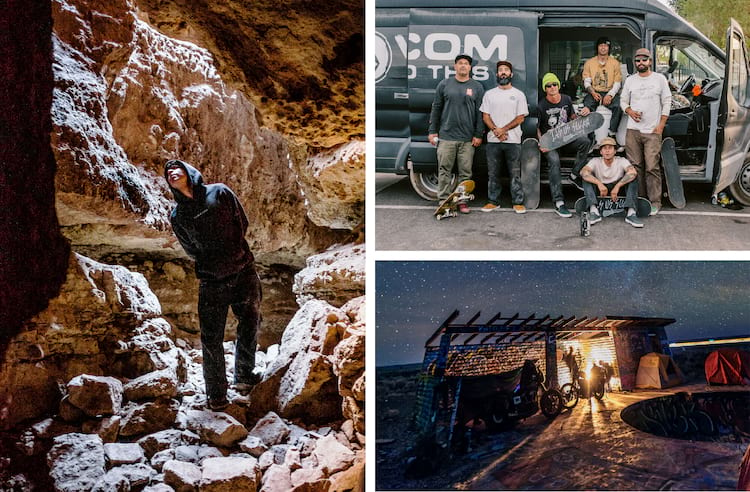 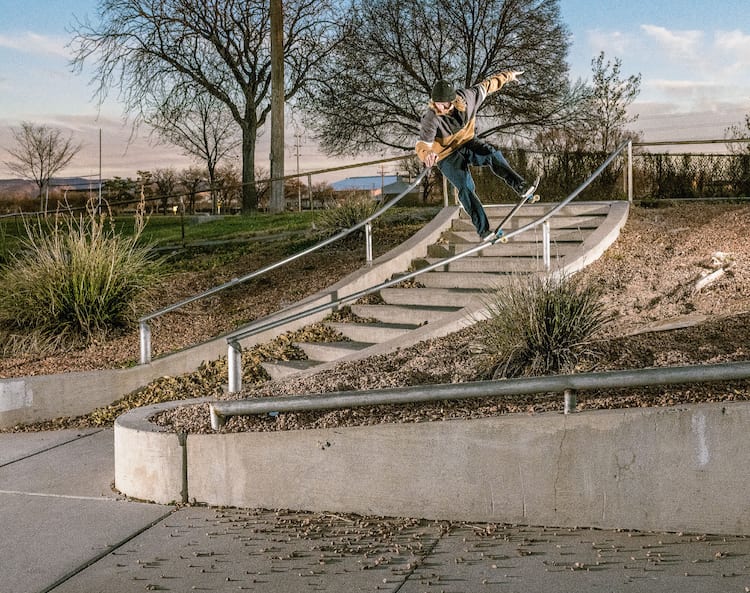 The scariest thing about this rail to Alec Majerus were the pebbles on the sidewalk—nosegrind through the curve to close the trip out     Photo: Remy
© 1981–2022 High Speed Productions, Inc.